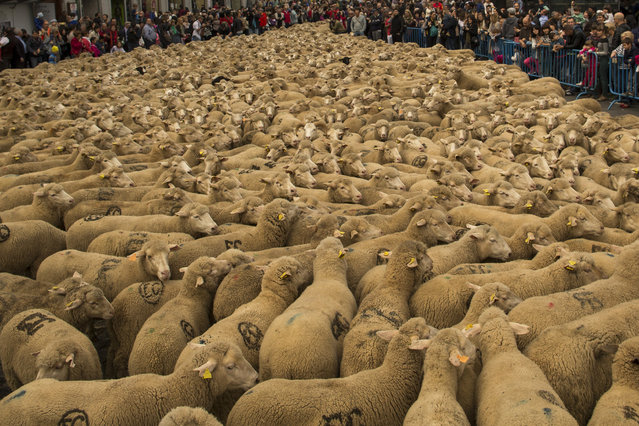 In this file photo dated Sunday, November 2, 2014, shepherds lead their sheep through the centre of Madrid, Spain. Shepherds have guided a flock of 2,000 sheep through Madrid streets in defense of ancient grazing, droving and migration rights increasingly threatened by urban sprawl and modern agricultural practices. Tourists and city-dwellers were surprised to see the capital's traffic cut to permit the ovine parade to bleat bells clanking its way past the city's most emblematic locations. (Photo by Andres Kudacki/AP Photo) 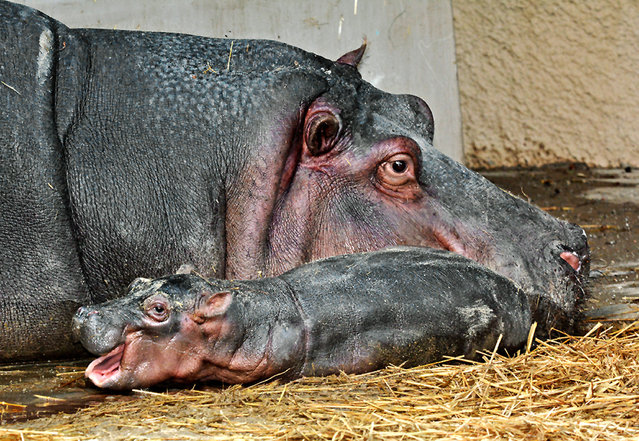 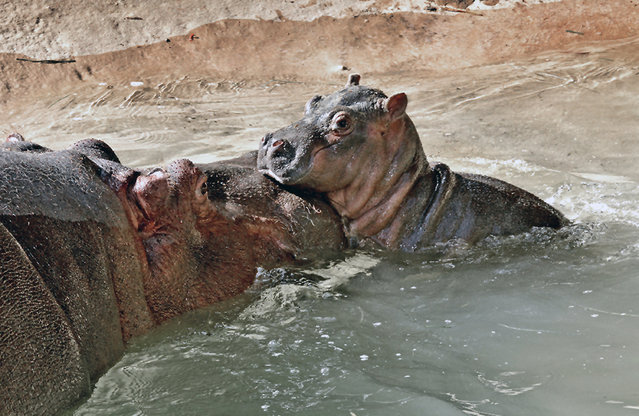 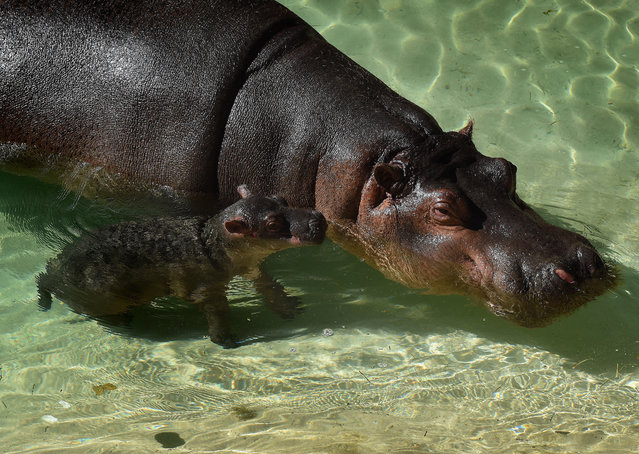 The Los Angeles Zoos female Hippopotamus named Mara stands beside her newborn calf (nameless at the moment) in their compound at the zoo in Los Angeles, California on November 4, 2014. Mara went into labor on October 31 and gave birth to the healthy calf two and a half hours later. (Photo by Mark Ralston/AFP Photo) 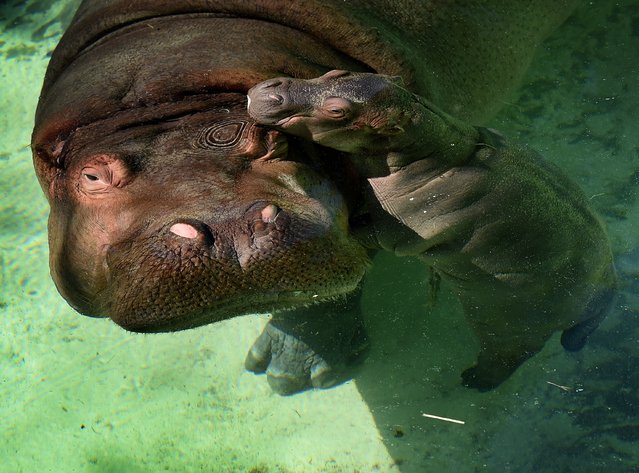 The Los Angeles Zoos female Hippopotamus named Mara stands beside her newborn calf (nameless at the moment) in their compound at the zoo in Los Angeles, California on November 4, 2014. (Photo by Mark Ralston/AFP Photo) 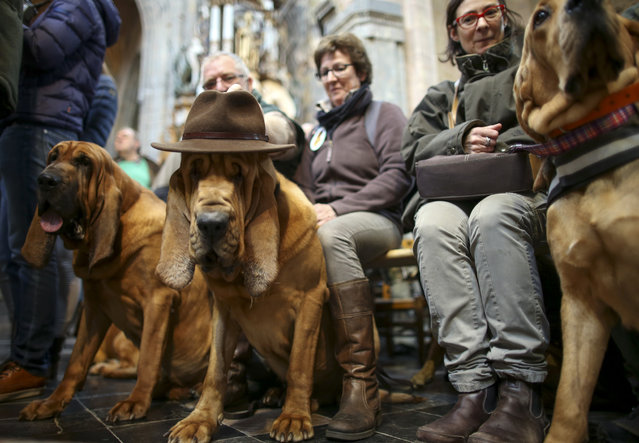 A dog waits to be blessed on celebration the day of Saint Hubert at the Basilica of St Hubert, Belgium, November 3, 2014. Annually held on November 3 in commemoration of Saint Hubert, the patron saint of hunters, a mass is held after which animals are blessed. (Photo by Olivier Hoslet/EPA) 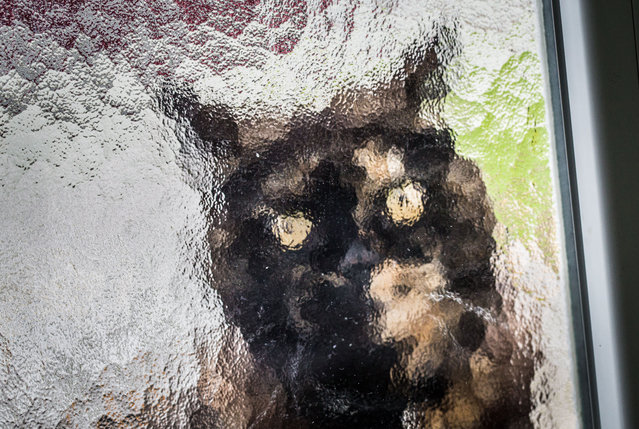 A cat sits behind a glass pane in the front door waiting to be let in from the rain in Frankfurt am Main,Germany, November 3, 2014. (Photo by Frank Rumpenhorst/EPA) 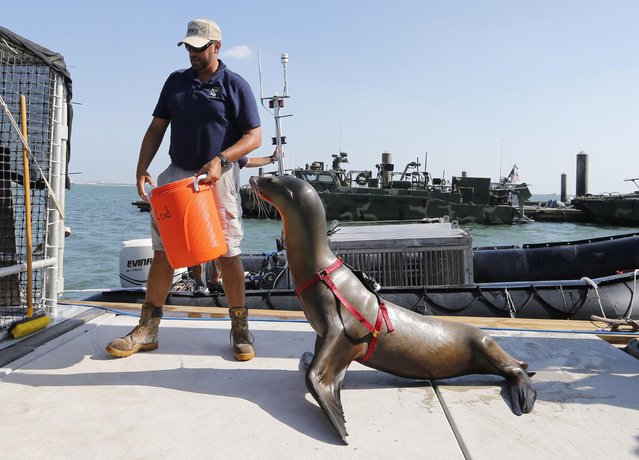 A trainer guides a sea lion back to its cage after it performed its duties during a media demonstration of the International Mine Countermeasures Exercise (IMCMEX), at the U.S. Fifth Fleet naval base, part of U.S. Central Command headquarters in Manama, November 2, 2014. Sea lions equipped with lasers and sonar are deployed for the first time to detect and remove objects, as well as secure harbours and underwater areas which are hard to reach, according to officials. A total of 44 nations from six continents with more then 6,500 personnel are taking part in IMCMEX, the world largest naval exercise, which started on October 27, 2014. (Photo by Hamad I. Mohammed/Reuters) 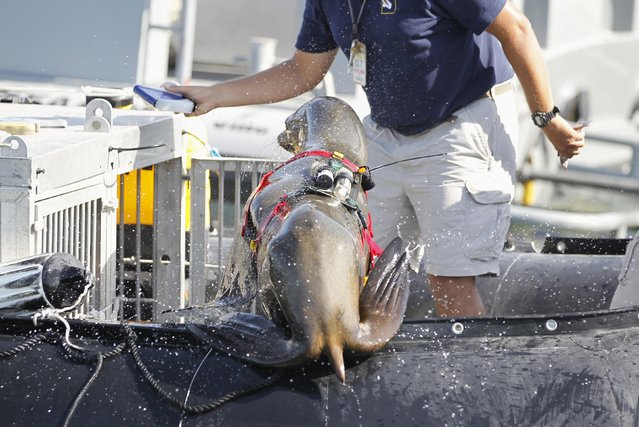 A sea lion with laser and sonar devices attached to its back jumps into a boat during a media demonstration of the International Mine Countermeasures Exercise (IMCMEX), at the U.S. Fifth Fleet naval base, part of U.S. Central Command headquarters in Manama, November 2, 2014. (Photo by Hamad I. Mohammed/Reuters) 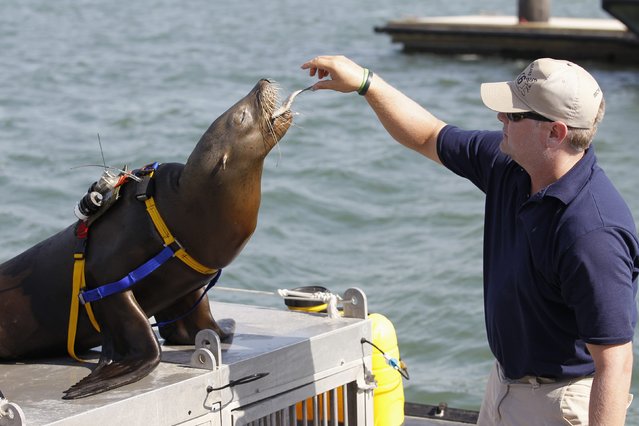 A trainer feeds a fish to a sea lion as a reward after it performs its duties during a media demonstration of the International Mine Countermeasures Exercise (IMCMEX), at the U.S. Fifth Fleet naval base, part of U.S. Central Command headquarters in Manama, November 2, 2014. (Photo by Hamad I. Mohammed/Reuters) 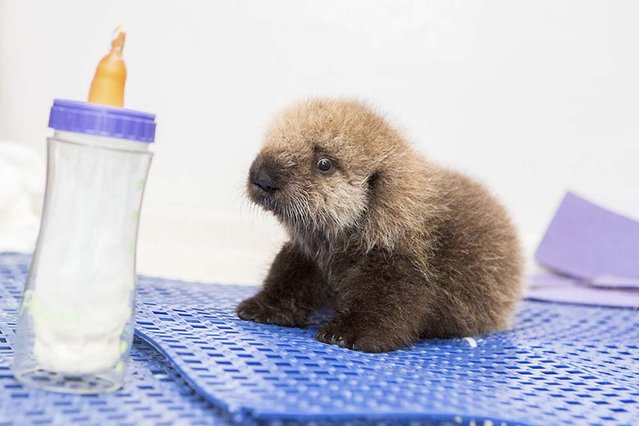 A five-week-old orphaned Southern Sea Otter pup rests on a rubber mat after arriving at the Shedd Aquarium's Abbott Oceanarium in Chicago, Illinois October 28, 2014 in this handout photo provided to Reuters on November 5, 2014. The stranded pup was found on September 30 on Coastways Beach in California and was rescued the next day to be brought back to health at the Monterey Bay Aquarium. Southern sea otters were listed as “threatened” under the U.S. Endangered Species Act in 1977. (Photo by Brenna Hernandez/Reuters/Shedd Aquarium) 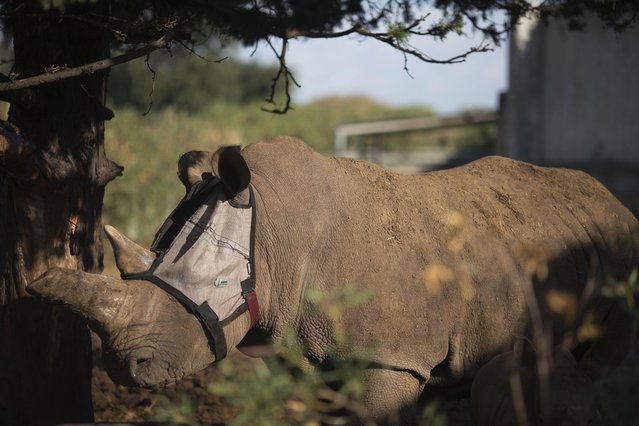 Tanda, 22, a two-ton rhinoceros wears a mask at the Zoological Center of Tel Aviv-Ramat Gan near Tel Aviv, Israel, Tuesday, November 4, 2014. Israeli specialists are helping Tanda, who has a chronic eye infection, to fend off flies that are worsening its condition with a custom made mask. (Photo by Ariel Schalit/AP Photo) 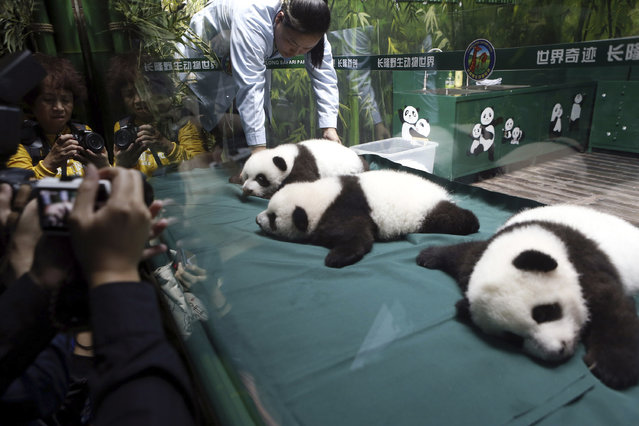 Visitors take photos of the panda triplet cubs in the Chimelong Safari Park in Guangzhou in south China's Guangdong province Wednesday, November 5, 2014. Keepers responsible for looking after the world's only surviving set of giant panda triplets said the cubs were doing well, as they celebrated turning 100 days old on Wednesday. The triplets born at Chimelong are the fourth case of panda triplets ever recorded. (Photo by AP Photo) 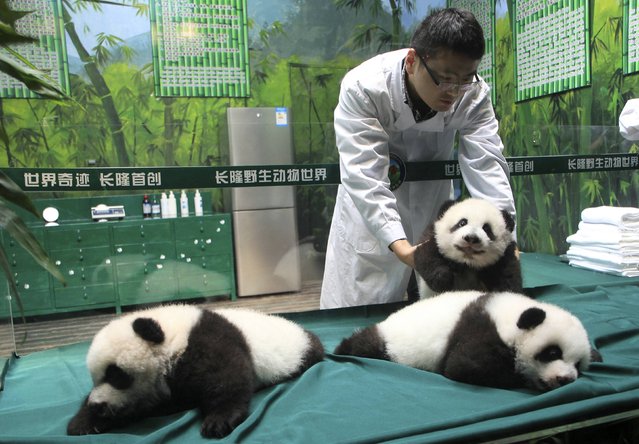 A feeder moves a giant panda cub in an enclosure as the panda triplets make their debut appearances to the public to celebrate their 100th days after birth, at Chimelong Safari Park in Guangzhou, Guangdong province November 5, 2014. The triplets was given birth by giant panda Juxiao (not pictured) at the park in July. The birth is seen as a miracle due to the low reproduction rate of giant pandas. (Photo by Reuters/China Daily) 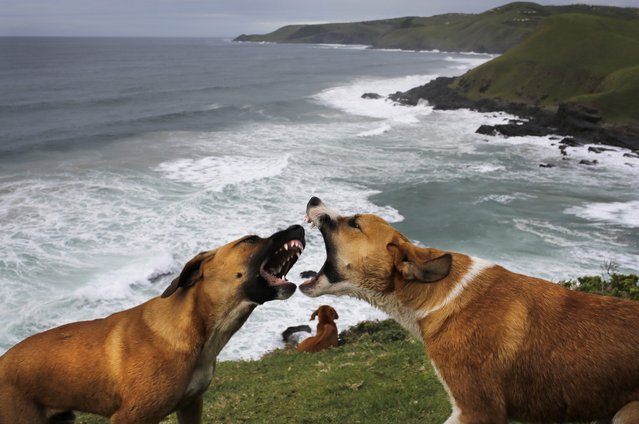 Two wild dogs play fight in Coffee Bay, South Africa, 05 November 2014. The area has many stray and wild dogs and this pack of five dogs are seen in the mornings playing on the beach and in the nearby hills overlooking the Indian Ocean. (Photo by Kim Ludbrook/EPA) 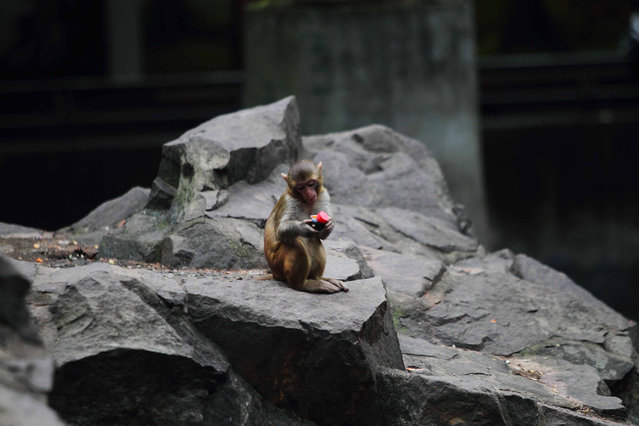 This picture taken on November 1, 2014 shows a monkey playing with a toy inside its enclosure at a zoo in Hangzhou, in eastern China's Zhejiang province. (Photo by AFP Photo) 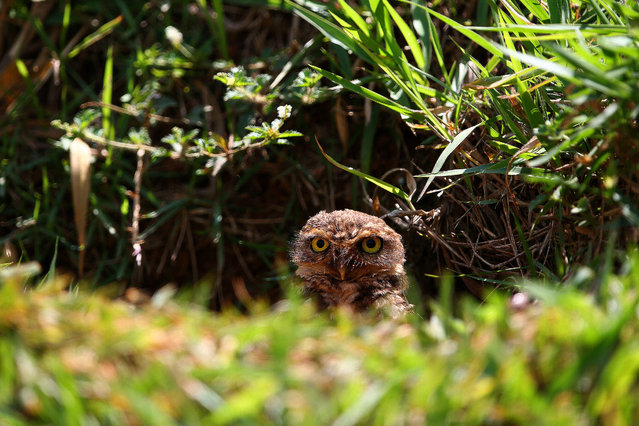 An owl perches next to the track during practice ahead of the Brazilian Formula One Grand Prix at Autodromo Jose Carlos Pace on November 7, 2014 in Sao Paulo, Brazil. (Photo by Mark Thompson/Getty Images) 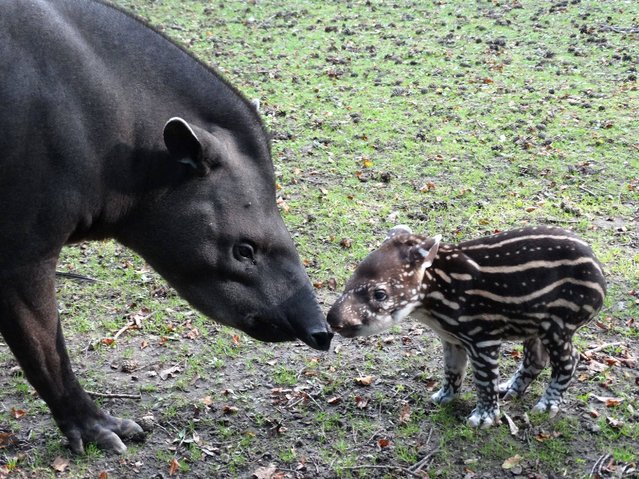 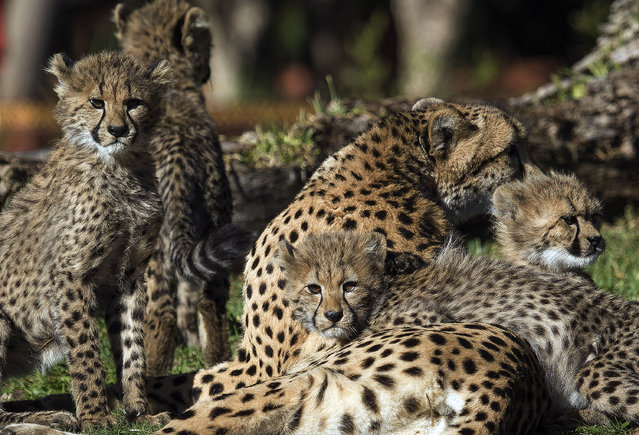 In this photo provided by San Diego Zoo Global, four almost 4-month-old cheetah cubs rest alongside their mother at the San Diego Zoo Safari Park Tuesday, November 4, 2014 in Escondido, Calif. The cubs, two males and two females, were born to first-time mother Addison on July 13 at the Safari Park's off-site cheetah breeding center. The family was moved to their new habitat at the Safari Park's Okavango Outpost this week. Keepers describe Addison as an excellent mom, calm, confident and extremely protective. They describe the cubs as very vocal, curious and playful, each with their own distinct temperament. Cheetahs are found in Africa and a small portion of Iran. They are classified as vulnerable on the International Union for Conservation of Nature's (IUCN) Red List. It is estimated that the worldwide population of cheetahs has been reduced from 100,000 in 1900 to just 10,000 today, with about ten percent living in zoos or wildlife parks. (Photo by AP Photo/San Diego Zoo Global) 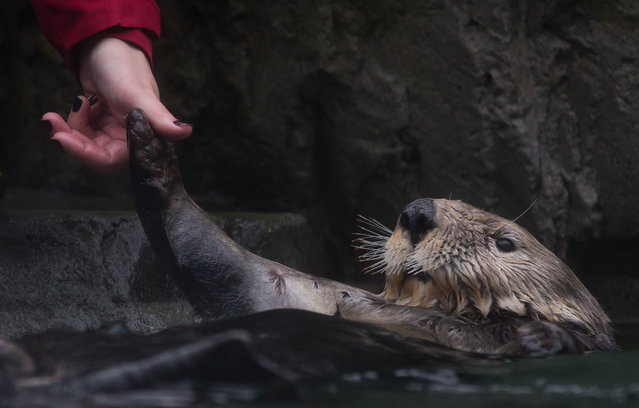 A trainer checks on rehabilitated sea otter Walter, who was blinded after a shotgun blast to the face near Tofino, British Columbia, Canada, during feeding after he was released into an enclosure with a female for the first time at the Vancouver Aquarium in Vancouver, British Columbia, Canada on Thursday, November 6, 2014. Walter underwent more than a year of treatment and rehabilitation after being rescued in October 2013 and was deemed non-releasable by Fisheries and Oceans Canada. (Photo by Darryl Dyck/AP Photo/The Canadian Press)

Tens of thousands of starlings start their murmuration, with Criffel mountain in the background, as dusk falls near Gretna Green on the England and Scotland boarder, on November 5, 2014. The reason for the beautiful spectacle is not definitively known, with theories ranging from a defence mechanism against predators to attracting more birds to join their roost. (Photo by Owen Humphreys/PA Wire) 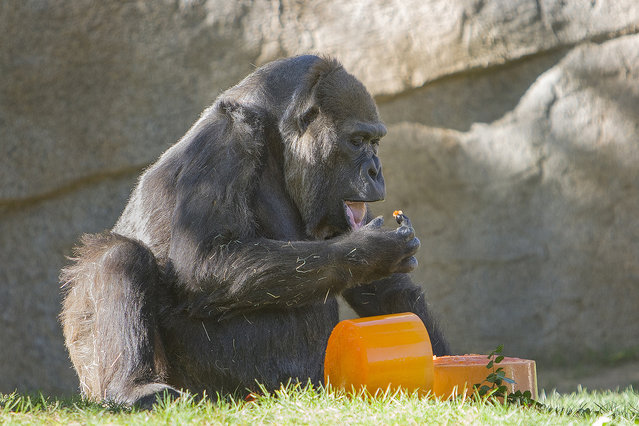 A 57-year-old western lowland gorilla prepares to eat some ice cake she received for her birthday Thursday morning November 6, 2014 at the San Diego Zoo Safari Park. The ice cake was colored with a sugar-free, orange-flavored drink mix, and Vila, and all the gorillas in the troop, took turns scraping cake onto their fingers or just licking the cake during the morning celebration. The gorilla habitat was filled with gift boxes and gourds painted by volunteers. Animal care staff made dozens of ice cupcakes – with pureed sweet potato and raisins – and filled the habitat with the animals' favorite treats like leafy greens, vegetables, air-popped popcorn and Chex Mix. Vila is one of the oldest gorillas in the world and the matriarch of the 8-gorilla troop at the Safari Park. She has served as a surrogate mother of several hand-raised gorillas during her life. It is estimated that Vila was born in late October of 1957 in the Congo. After arriving in the United States, Vila was hand-raised at the San Diego Zoo and then moved to the Safari Park, and she has lived there since 1975. There are three other western lowland gorillas who are close in age to Vila. The three other oldest-known gorillas live at the Columbus Zoo in Ohio (born Dec. 1958), the Little Rock Zoo in Arkansas (born June 1958) and the Berlin Zoo in Germany (born May 1959). (Photo by AP Photo/San Diego Zoo Safari Park) 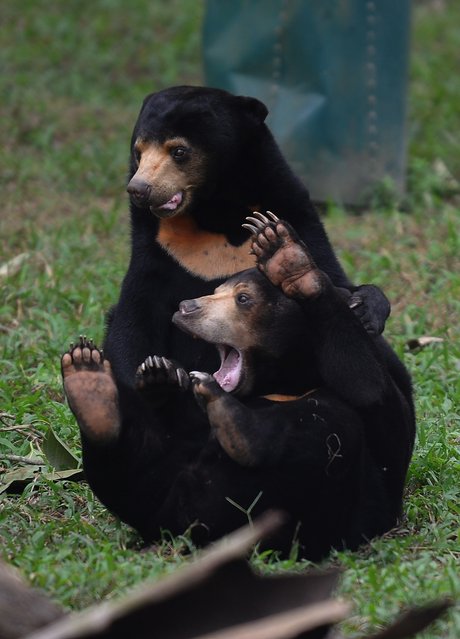 Two sun bears play inside one of the newly opened semi-natural enclosures at the Vietnam Bear Rescue Center run by Animals Asia in Tam Dao, northern province of Vinh Phuc on November 5, 2014. The centre currently houses more than one hundred bears rescued from Vietnam's bear bile industry, according to Animals Asia in a press release adding that in Vietnam there are officially 1,978 bears still in farms despite the practice being made illegal in 1992. (Photo by Hoang Dinh Nam/AFP Photo) 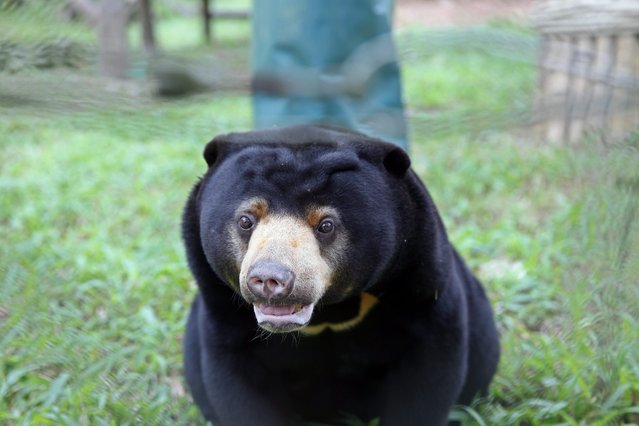 A sun bear plays inside an enclosure at the Vietnam Bear Rescue Centre, which is operated by international organization Animals Asia, in Tam Dao national park, about 70 kms from Hanoi, Vietnam, 05 November 2014. Four new semi- natural encloses for bears were officially opened on 05 November 2014, with capacity of up to 80 bears. Animals Asia has rescued more than 500 bears in Vietnam and China, according to media reports. (Photo by Luong Thai Linh/EPA) 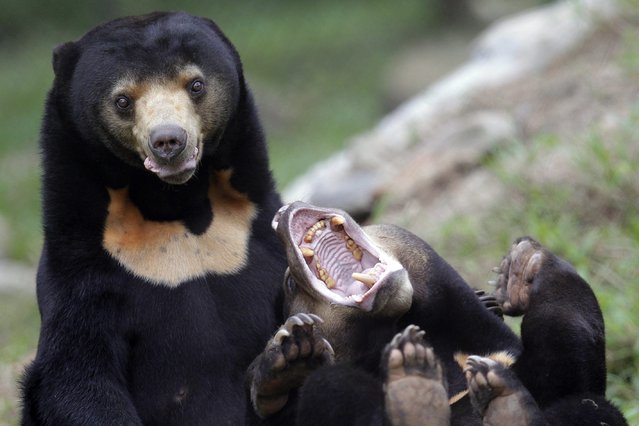 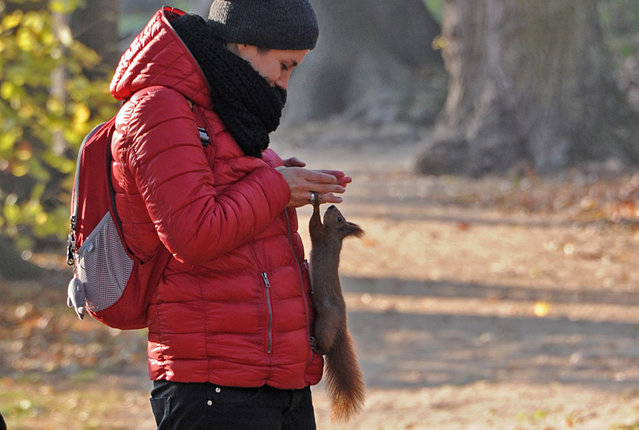