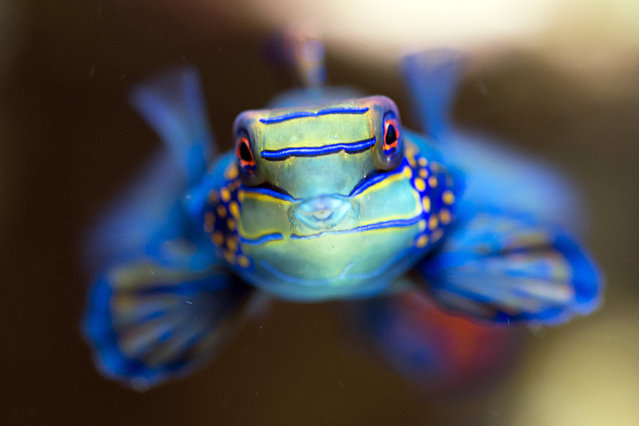 A mandarinfish (Synchiropus splendidus) swims in its aquarium at the zoo in Basel, Switzerland, November 12, 2014. The zoo's vivarium contains about 6,000 individual inhabitants from as many as 480 different species. (Photo by Georgios Kefalas/EPA) 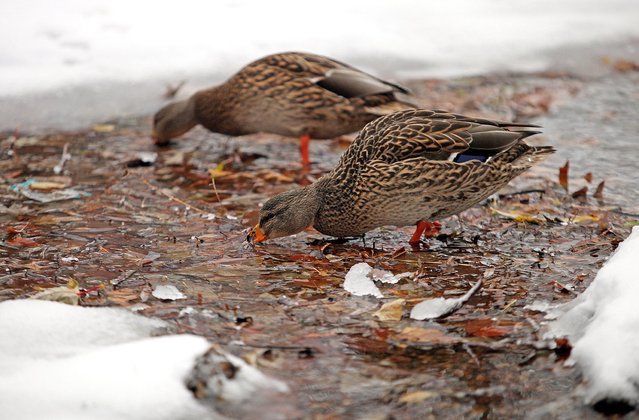 A pair of female ducks forage for food under ice in Minnehaha Creek in Minneapolis, November 10, 2014. (Photo by Eric Miller/Reuters) 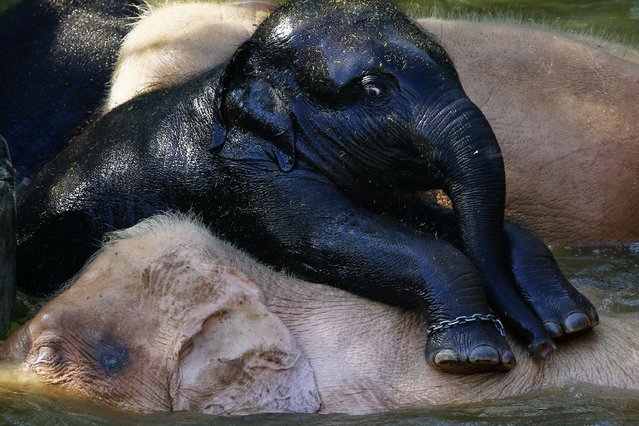 A baby elephant, which was found in a river during the rainy season, plays with white elephants during their bath in their enclosure near the Uppatasanti Pagoda in Naypyitaw November 10, 2014. The baby elephant is kept with five white elephants, seen as sacred signs of good fortune, peace and wealth in predominantly Buddhist Myanmar. (Photo by Damir Sagolj/Reuters) 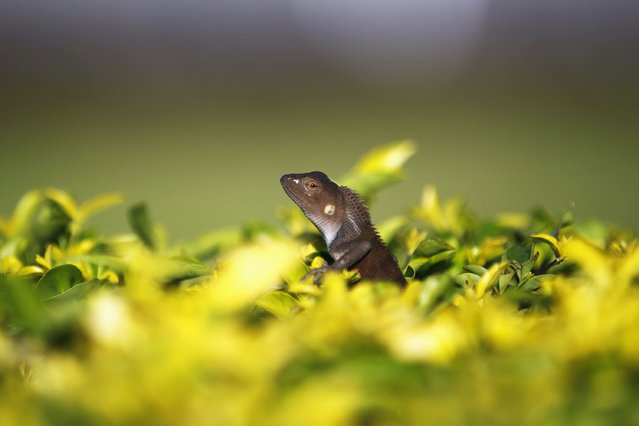 A lizard peeks out from vegetation in a traffic island in Naypyitaw, Myanmar November 11, 2014. (Photo by Soe Zeya Tun/Reuters) 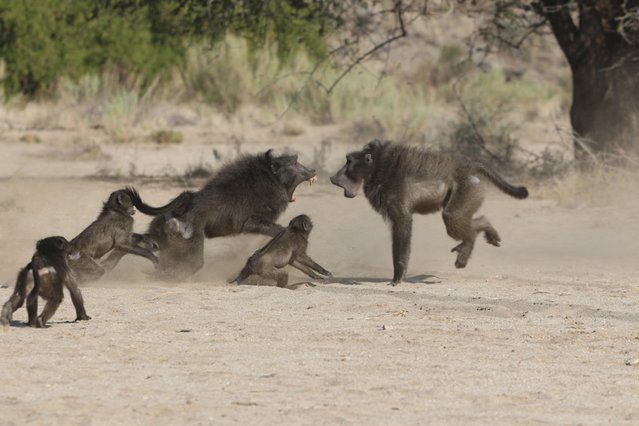 A dominant male Chacma baboon fights for access to females in Tsoaobis Leopard Park in Namibia in this 2007 handout photo provided by Eurekalert.org on November 12, 2014. Predators like leopards and cheetahs are not the biggest mortal threat to baby Chacma baboons, large and aggressive monkeys that live across southern Africa. That threat comes from adult males of their own species. (Photo by Elise Huchard/Reuters) 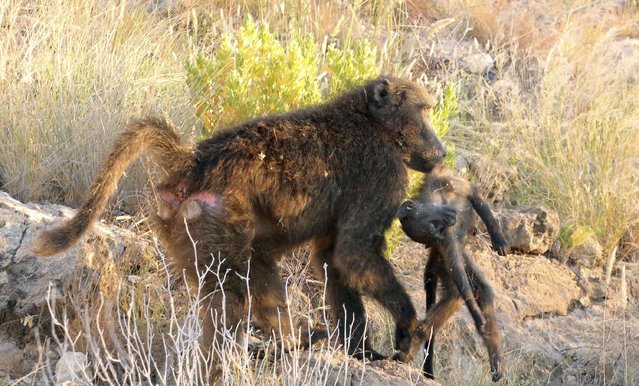 A female Chacma baboon carries a dead infant after it was killed by a dominant male in Tsoaobis Leopard Park in Namibia in this 2013 handout photo provided by Eurekalert.org on November 12, 2014. (Photo by Elise Huchard/Reuters) 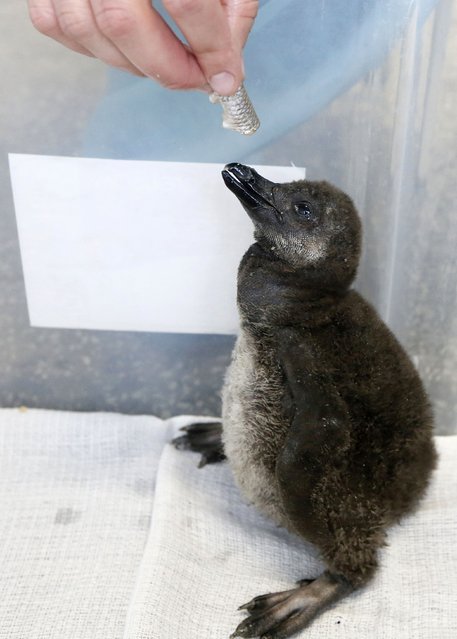 A zoo employee feeds a 3-week-old African penguin chick, also known as the Black-footed penguin, at the Royev Ruchey zoo on the suburbs of Krasnoyarsk, Siberia, November 14, 2014. The chick was the first African penguin to have been born in Russian territory, according to an official representative of the Krasnoyarsk zoo. (Photo by Reuters/Stringer) 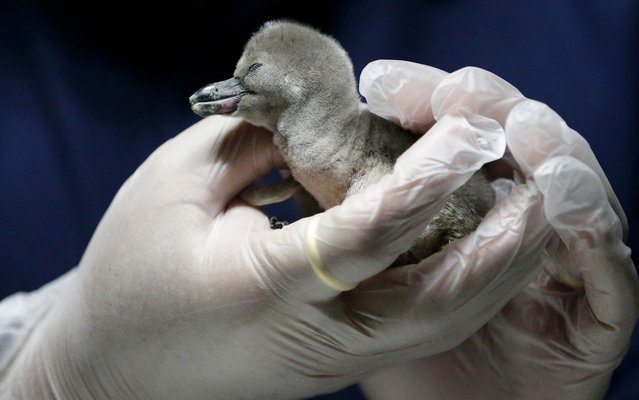 A newly-hatched penguin closes eyes as it is held by Manila Ocean Park Executive Vice-President Francis Low Friday, November 14, 2014 in Manila, Philippines. The Humboldt penguin chick was hatched at the country's largest oceanarium early Friday from mother “Roukia” and father “Jiggy” to become the second penguin to be born in the country. About a dozen Humbodlt penguins were acquired from Germany. (Photo by Bullit Marquez/AP Photo) 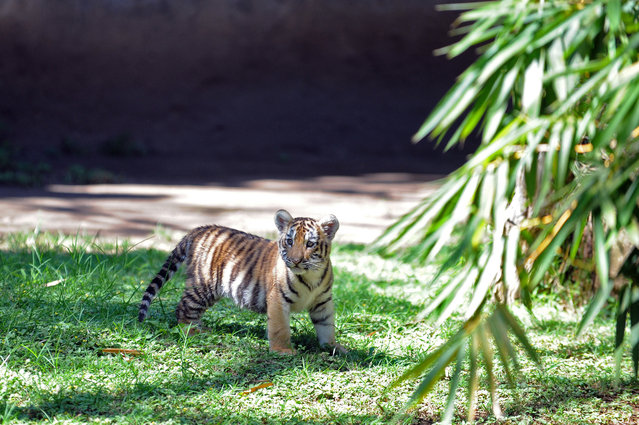 One of three Bengal tiger cubs born at Guatemala City's La Aurora zoo, the first in more than 25 years, is presented to the press on November 10, 2014. (Photo by Johan Ordonez/AFP Photo) 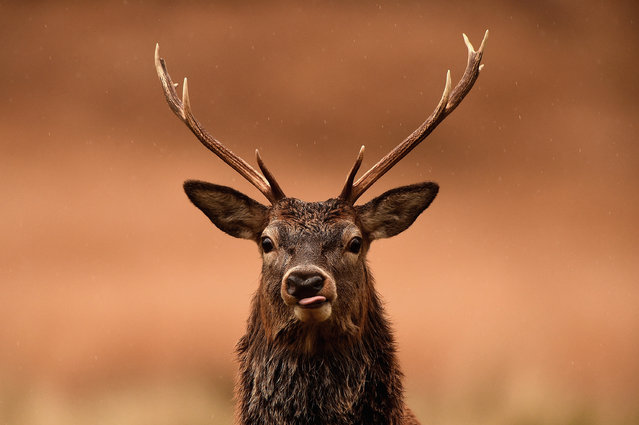 Red deer graze following the end of the rutting season on November 12, 2014 in Glen Etive, Scotland. The rutting season sees the large red deer stags compete against each other for mating rights and can be heard roaring and bellowing in an attempt to attract the hinds. The rut draws to a close in early November when the males will spend the winter feeding to regain strength for the following year's season. (Photo by Jeff J. Mitchell/Getty Images) 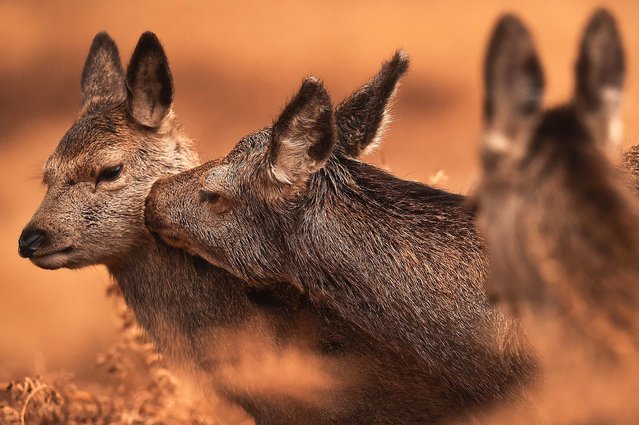 Red deer graze at the end of the rutting season when large red deer stags compete against each other for mating rights on November 12, 2014 in Glen Etive, Scotland. (Photo by Jeff J. Mitchell/Getty Images) 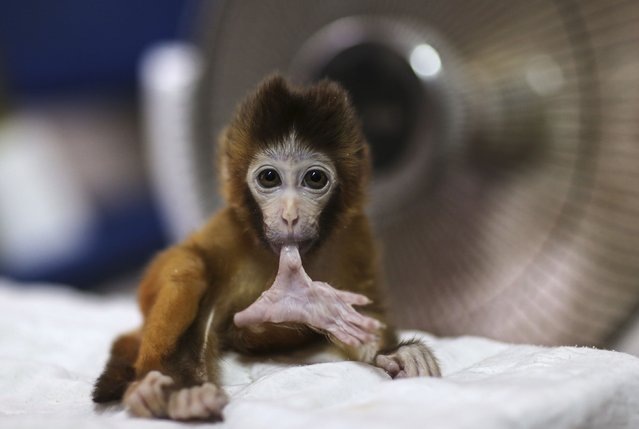 A three-month-old macaque bites its toe in front of a fan heater at a wildlife park in Kunming, Yunnan province, November 13, 2014. (Photo by Wong Campion/Reuters) 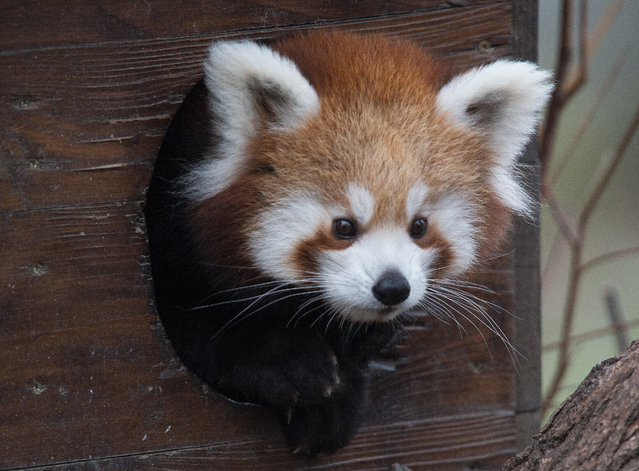 A four-months-old red panda cub peeks through a hole of a wooden shack at Bratislava's Zoo on November 13, 2014. Two cubs, Pim and Pam, were born to parents Pung and Coco on July 2. The red panda, also known as lesser panda and red cat-bear, is a small arboreal mammal native to the eastern Himalayas and south-western China. (Photo by Joe Klamar/AFP Photo) 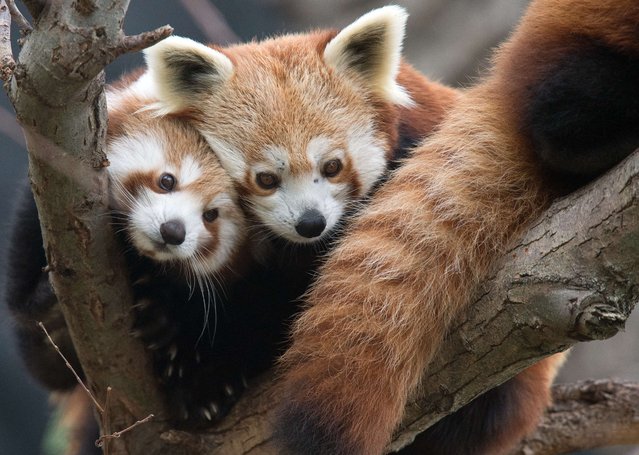 A four-months-old red panda cub and its mother (R) rest on tree branches at Bratislava's Zoo on November 13, 2014. Two cubs, Pim and Pam, were born to parents Pung and Coco on July 2. (Photo by Joe Klamar/AFP Photo) 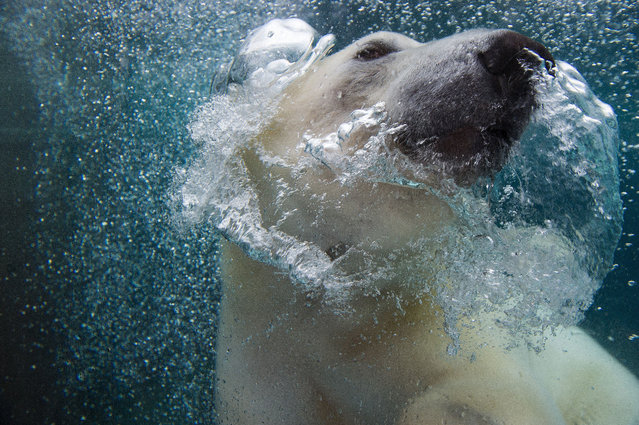 An polar bear swims on November 13, 2014, at the zoo, in Mulhouse, eastern France. (Photo by Sebastien Bozon/AFP Photo) 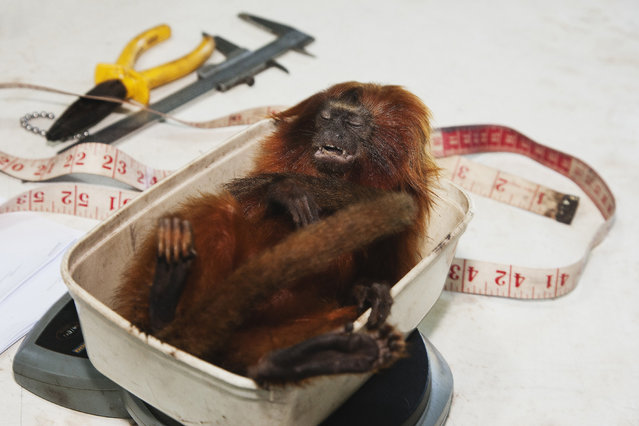 A tranquilised golden lion tamarin is inspected, weighed, and measured in the lab by a research biologist. These are the adorable images of a group of endangered monkeys having their regular health check up. From having their weight checked in tiny scales to measuring their size the cute creatures are happy to follow doctors orders. The golden lion tamarin is endangered with less than 4,000 believed to still be living in the wild. Spread across three locations on the coast of southeastern Brazil, tamarins are regularly monitored to aid the growth of the species. Photographer Jami Tarris travelled to the Atlantic Forest in Rio de Janeiro to photograph the mammals. (Photo by Jami Tarris/Caters News) 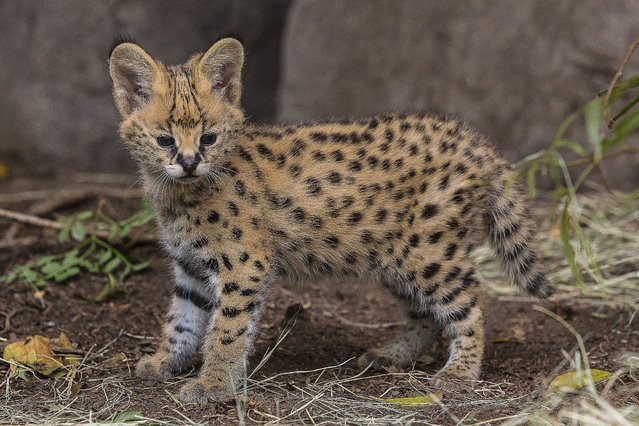 A five-week-old African serval kitten examines his surrounds after animal care staff performed a weight check on the cat Thursday, November 13, 2014, at the San Diego Zoo. The small kitten, weighing in today at three pounds, was born to first time mother, Onshe, at the Zoo's Kopje area on October 7. (Photo by Ken Bohn/AP Photo/San Diego Zoo) 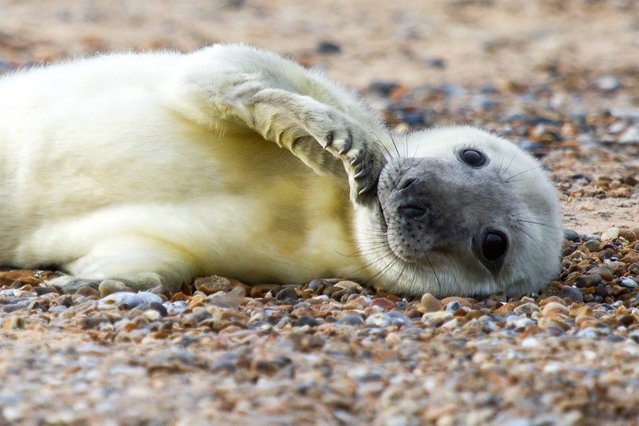 Undated handout photo issued by The National Trust of one of the first seal pups of the season to have been born at the site of one of England's biggest colonies, Blakeney Point, on the north Norfolk coast. Grey seal numbers at Blakeney Point have grown steadily since 25 pups were born there 13 years ago. Last winter, 1,566 pups were born and with numbers increasing by about 25% each year, it is expected to become the biggest colony in England. (Photo by Justin Minns/PA Wire/The National Trust) 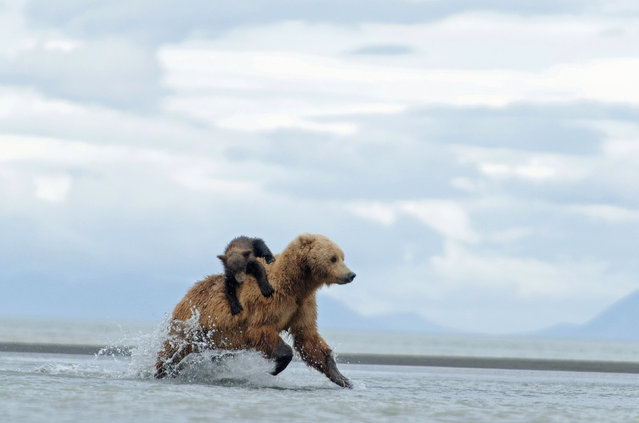 A adorable bear cub cant get enough of playing buckaroo – as it hangs onto its mum splashing about in a river. His mum was attempting to catch a fish supper for the pair as the plucky cub continued to jump on her back. And as she was concentrating on her meal the young bear became a distraction. So she sprung into life with him on her back before he was tossed into the water much to his delight. (Photo by Lisa Sidorsky/Caters News) 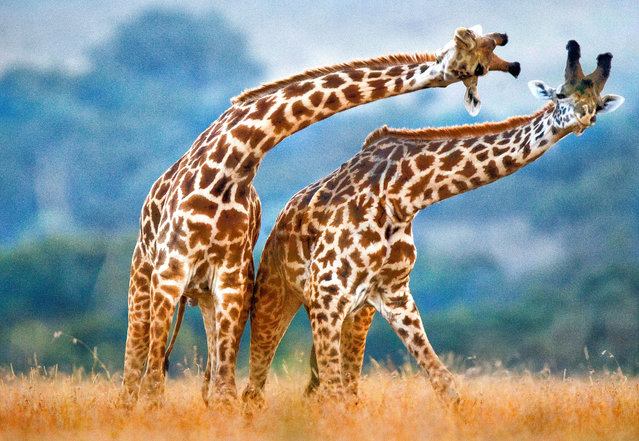 The giraffes dancing. When it comes to dancing these giraffes are definitely head and shoulders above the rest. The beautiful creatures appeared to be performing an elegant dance routine as they crossed their necks and swayed in time to the music in a series of synchronised dance moves. Despite their size the giraffes appeared to create perfect symmetry in what looked like a graceful dance routine. (Photo by Andrey Gudkov/Caters News) 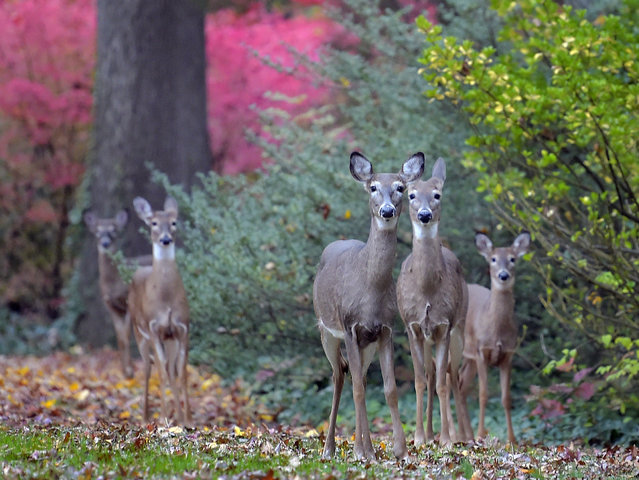 A herd of deer pause to contemplate a photographer in suburban neiborhood in Alexandria VA, November 13, 2014. (Photo by John McDonnell/The Washington Post) 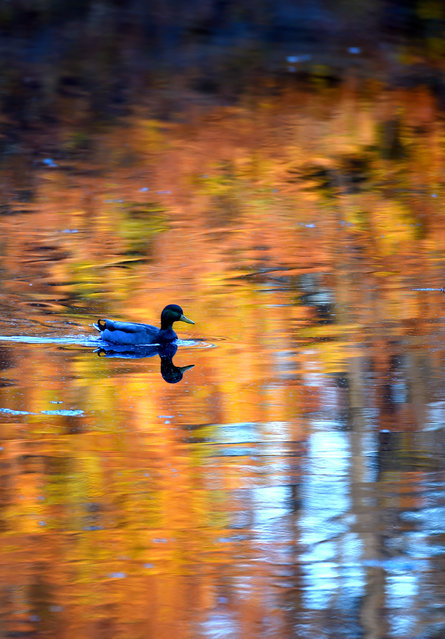 A Mallard duck cruises across a pond that is reflecting fall colors on November 10, 2014 in Crofton, MD. (Photo by Jonathan Newton/The Washington Post) 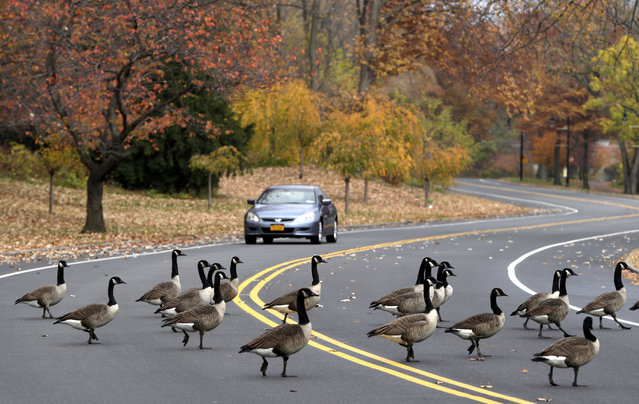 A vehicle slows down as a gaggle of geese crosses a road at Branch Brook Park, Wednesday, November 12, 2014, in Newark, N.J. (Photo by Julio Cortez/AP Photo) 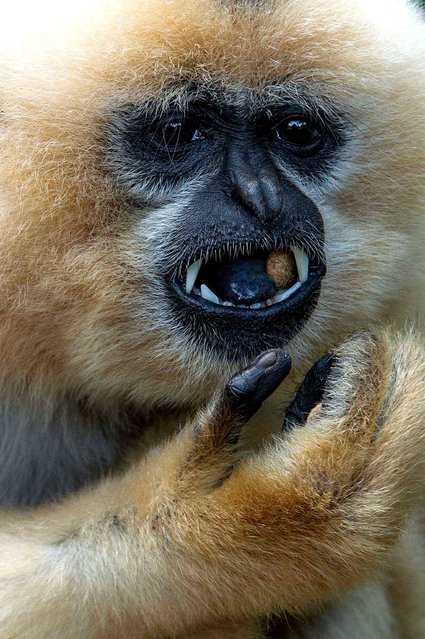 A red cheeked gibbon eats on November 13, 2014 at the zoo in the eastern French city of Mulhouse. (Photo by Sebastien Bozon/AFP Photo) 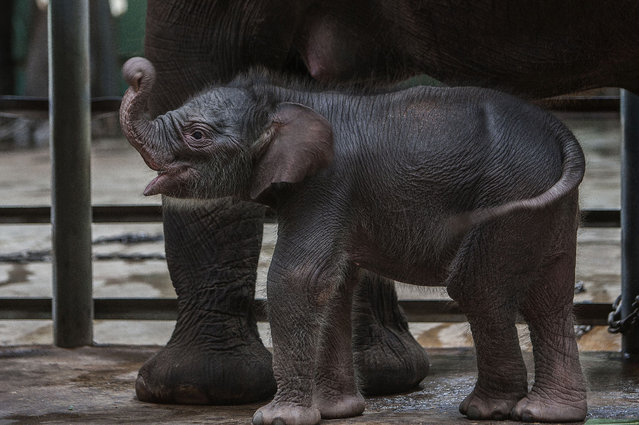 A one-week-old female baby Sumatran elephant is seen next to her mother, Siska, at the private Taman Safari zoo in Pasuruan in eastern Java island on November 14, 2014. The baby, born on November 6, was succesfully bred in captivity as part of conservation efforts for the critically-endangered Sumatran elephant. There are fewer than 3,000 Sumatran elephants remaining in the wild, according to the International Union for Conservation of Nature. According to conservationists rampant expansion of palm oil, paper plantations, and mines, has destroyed nearly 70 percent of the Sumatran elephant's forest habitat over 25 years and the animals remain a target of poaching. (Photo by Juni Kriswanto/AFP Photo) 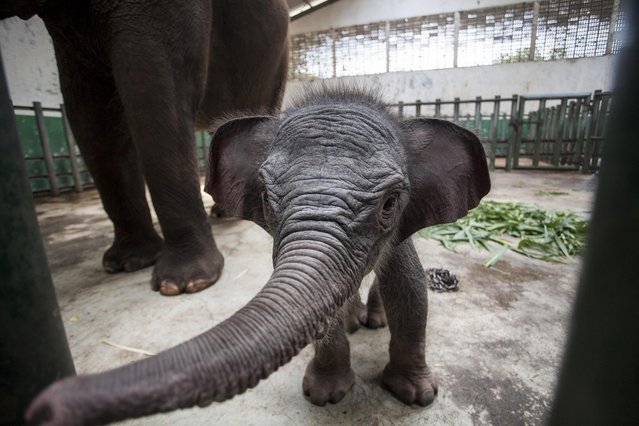 A seven-day-old female Sumatran elephant calf, stands with its mother at the Safari zoo in Pasuruan, East Java, 14 November 2014. According to reports, the smallest of the Asian elephants, Sumatran elephant (Elephas maximus sumatrensis) is facing serious pressures arising from illegal logging and associated habitat loss and fragmentation in Indonesia. The population has come under increasing threat from rapid forest conversion to plantations. (Photo by Fully Handoko/EPA) 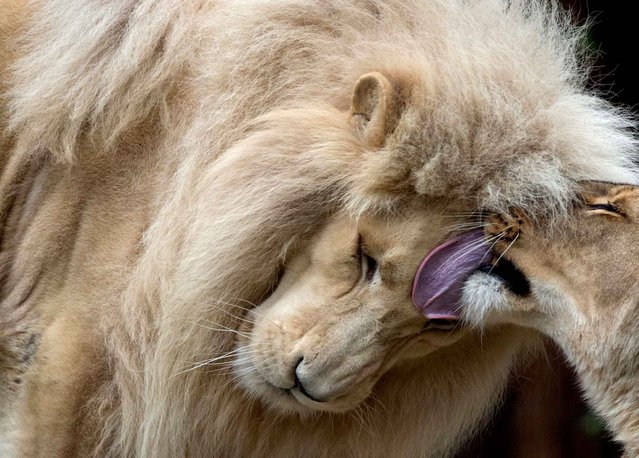 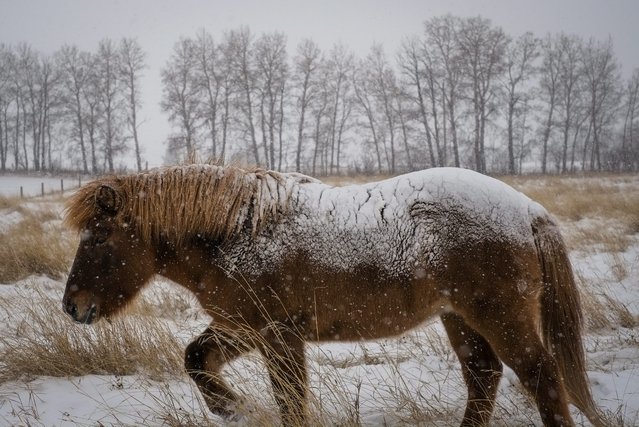 A snow-covered horse grazes a pasture near Cremona, Alta., Sunday, November 9, 2014, during the first heavy snow fall of the season. Heavy snow and plunging temperatures are expected to hit the Upper Midwest section of the United States this week, leaving as much of a foot of snow in its wake and pushing thermometer readings down 20- to 40- degrees overnight, part of a system being pushed in by the remnants of Typhoon Nuri that hit Alaska's Aleutian Islands with hurricane-strength winds over the weekend. (Photo by Jeff McIntosh/AP Photo/The Canadian Press) 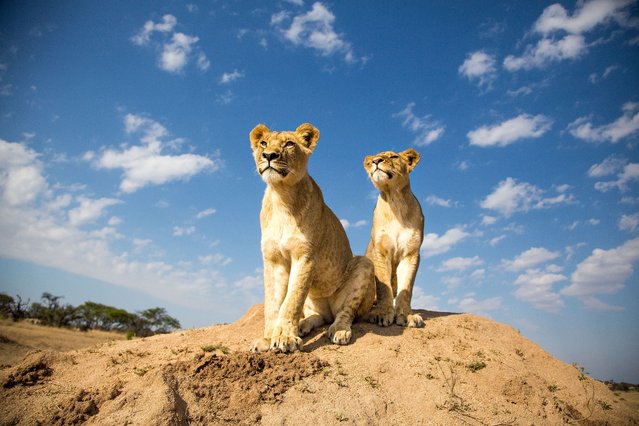 Two 18-month old lion cubs are seen at the Antelope Park, in Gweru, Zimbabwe, November 8, 2014. Lion walk was introduced to Antelope Park over a decade ago as part of an on-going conservation program to save African lions, whose population had dropped about 70 percent in the past two decades to estimatedly 320,000. Only cubs aged below 18 months are taken for lion walk. Once they grow older, human interaction is limited. The big cats will be groomed for release into the wild once they acquire the hunting skills and grow an edge to secure food against competitive predators like hyenas. (Photo by Caters News)
Edit Del
15 Nov 2014 13:10:00, post received 0 comments
Publication archive:
←   →
Popular tags:
All tags
Last searches: