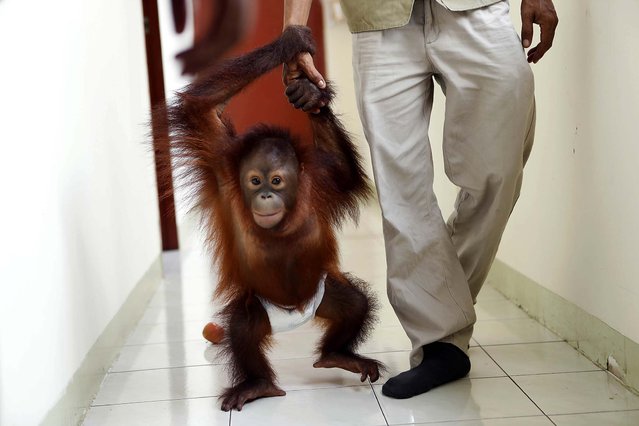 An Orangutan named Hang Lipo, aged 1 year and 6 months, walks out from a blood collection center at the Bukit Merah island foundation in Perak, Malaysia, on Oktober 20, 2013. The island's primate population has increased to 24 Orangutans that are from Borneo and Sumatra. (Photo by Samsul Said/Reuters) 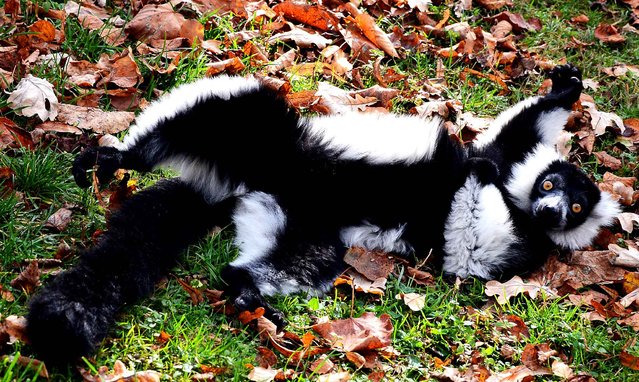 A black-and-white ruffed lemur is pictured in his enclosure at the Zoo in Wroclaw, Poland on October 24, 2013. (Photo by Janek Skarzynski/AFP Photo) 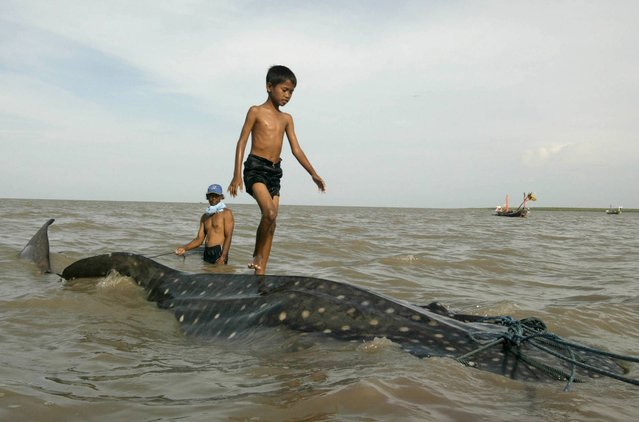 An Indonesian youth walks on the back of a beached whale shark as fishermen prepare to pull it back to the sea at Kenjeran beach in Surabaya, East Java, Indonesia, Tuesday, October 22, 2013. The whale survived and successfully released back into the sea. (Photo by AP Photo/Trisnadi) 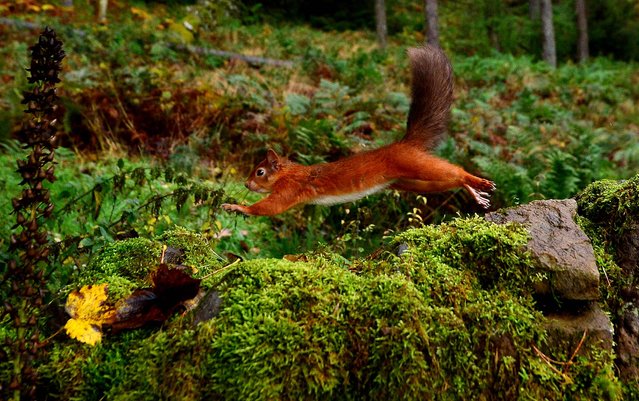 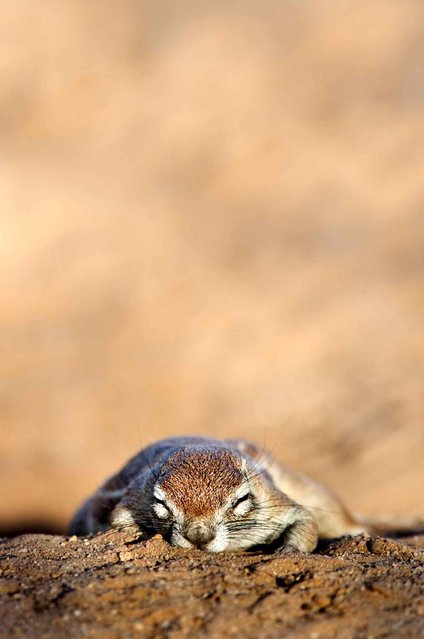 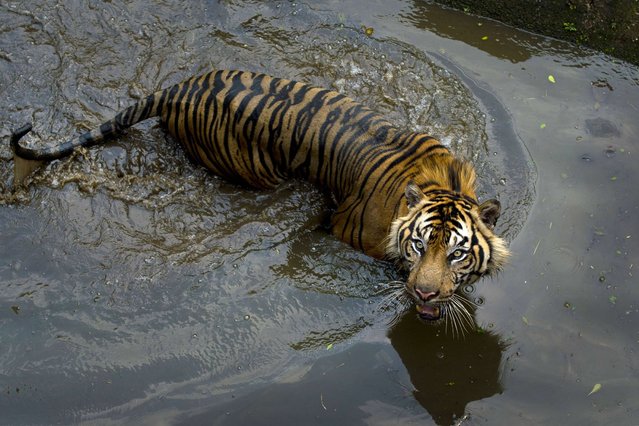 A critically endangered Sumatran tiger is seen in its enclosure at Ragunan Zoo in Jakarta, on Oktober 23, 2013. (Photo by Romeo Gacad/AFP Photo) 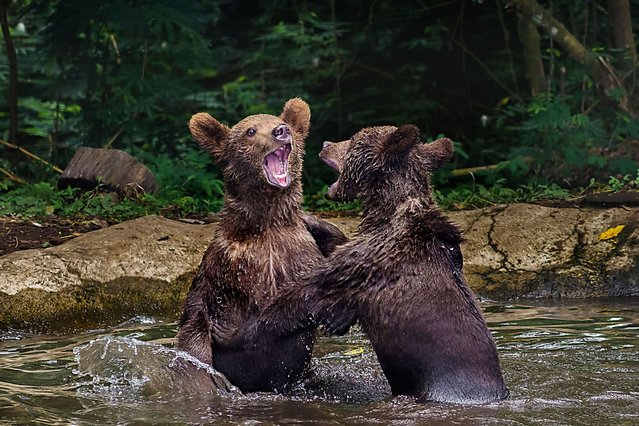 This is the incredible moment two bears were spotted trading blows in a boisterous river battle at Taman Safari Zoo in Indonesia, on Oktober 23, 2013. (Photo by Caters News) 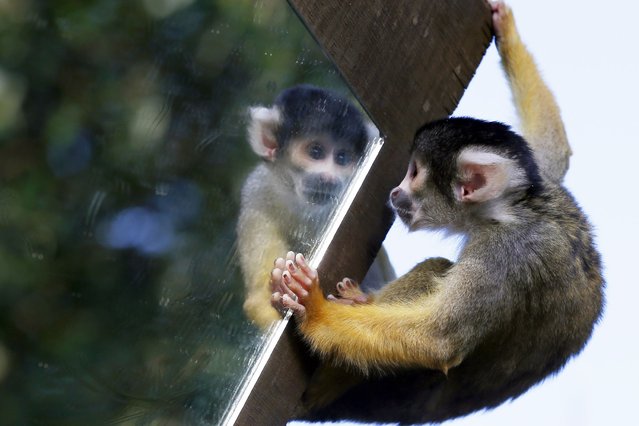 A squirrel monkey looks in a mirror at the London Zoo, on Oktober 24, 2013. (Photo by Adrian Dennis/AFP Photo) 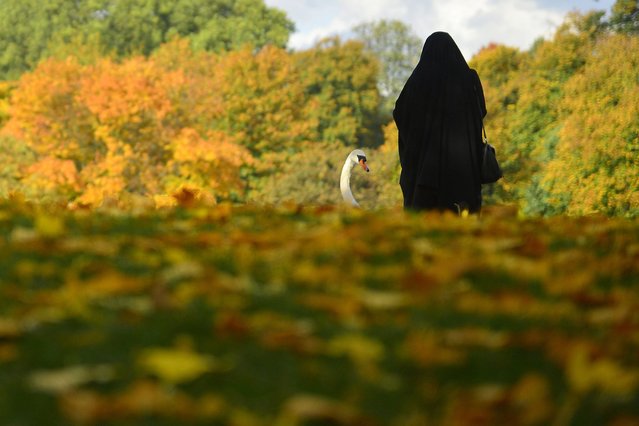 A visitor feeds a swan at The Serpentine lake in Hyde Park in central London, on Oktober 24, 2013. (Photo by Toby Melville/Reuters) 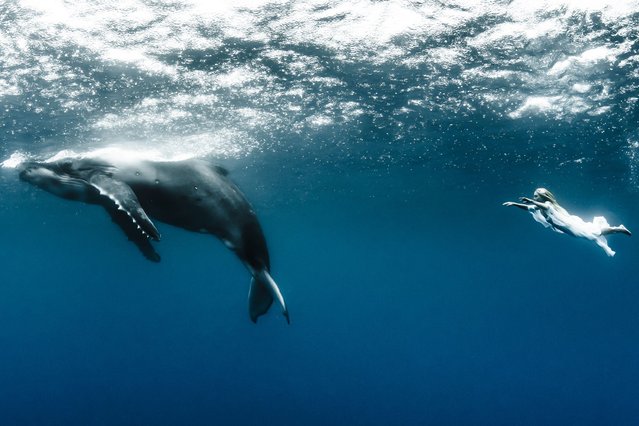 Model Hannah Fraser swims along with a humpback whale in the South Pacific Ocean, on Oktober 20, 2013. (Photo by Shawn Heinrichs/Barcroft Media) 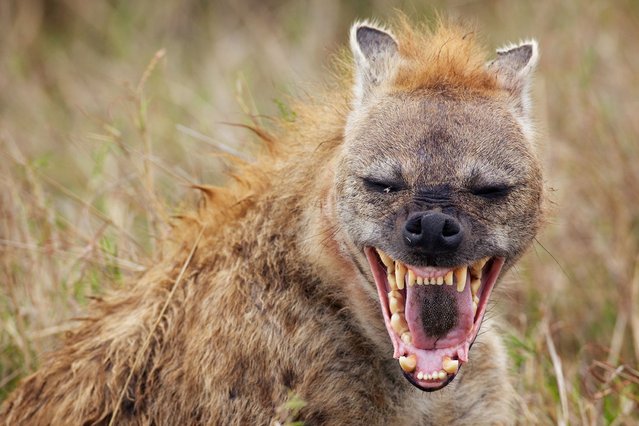 The torrential rain has failed to dampen the spirits of this hyena as he bursts into a hysterical laugh in Kenya, on Oktober 24, 2013. (Photo by Mark Bridger/Solent News & Photo Agency) 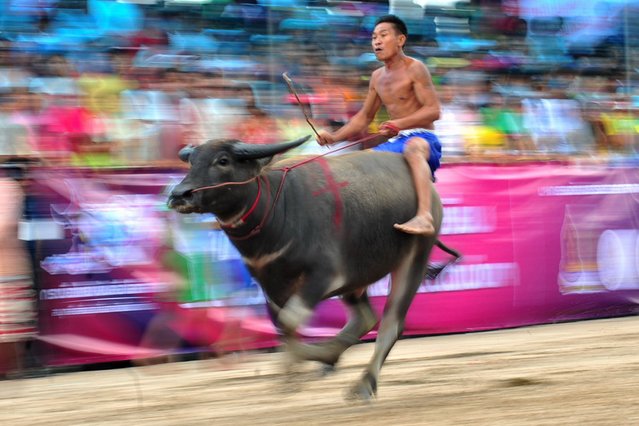 Thai buffalo racers compete during an Annual Buffalo Race in Chonburi Province, Thailand, on Oktober 22, 2013. The annual race was held as a celebration among rice farmers before the rice harvest. (Photo by Xinhua/Landov/Barcroft Media) 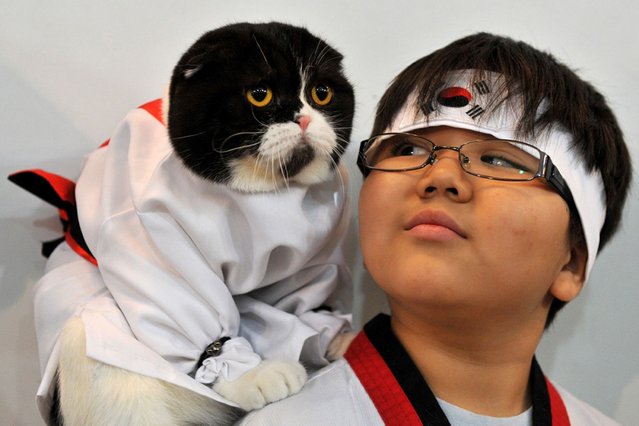 A boy and his Scottish Fold cat dressed in a kimono costume attend a cat exhibition in Bishkek, Kyrgyzstan, on Oktober 22, 2013. Cat lovers from Kyrgyzstan, Kazakhstan and Uzbekistan took part in the exhibition. (Photo by Vyacheslav Oseldko/AFP Photo) 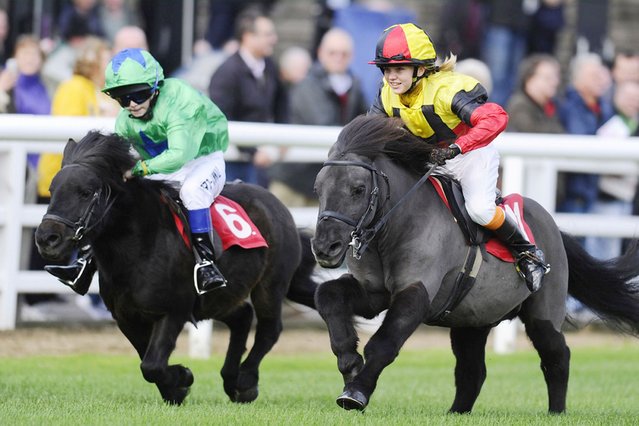 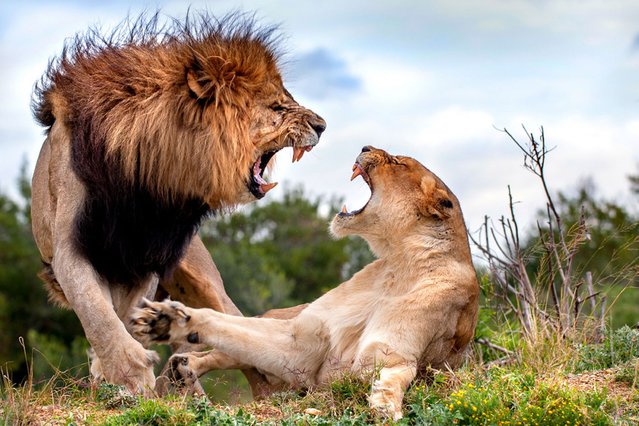 Photographer Brendon Jennings caught the moment when a lioness spurred the advances of a keen male in Kariega Game Reserve, South Africa. The male was quickly put in his place after nearly receiving a slash to the face. (Photo by Brendon Jennings/Caters News) 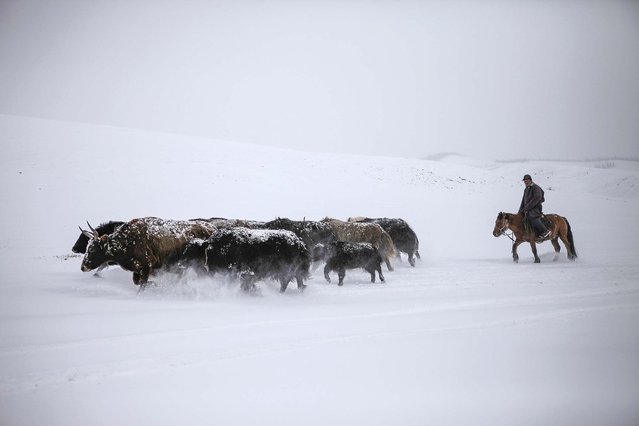 A man herds his yaks in the snow in Tsenkher Sum, Arhanga, Mangolia. Picture taken October 21, 2013. (Photo by Mareike Guensche/Reuters) 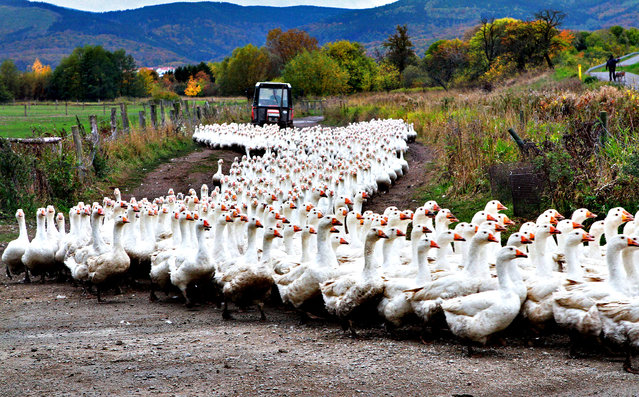 Geese of the Landi GmbH poultry farm are driven to their barn on October 21, 2013 in Veckenstedt, central Germany. The company brings up around 8,000 geese per year. Roast goose is a traditional dinner in Germany at Christmas and Martinmas. (Photo by Matthias Bein/AFP Photo/DPA) 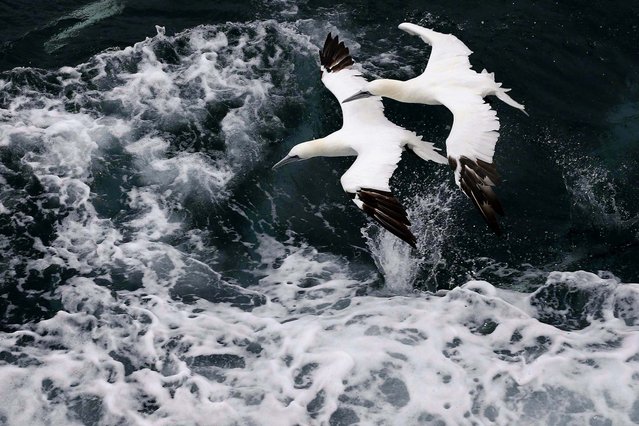 Two Morus Bassanus, known as Northern Gannet (fou de bassan) fly over the waves as a fishing trawler makes it way off the coast of Calais, France, on Oktober 22, 2013. (Photo by Pascal Rossignol/Reuters) 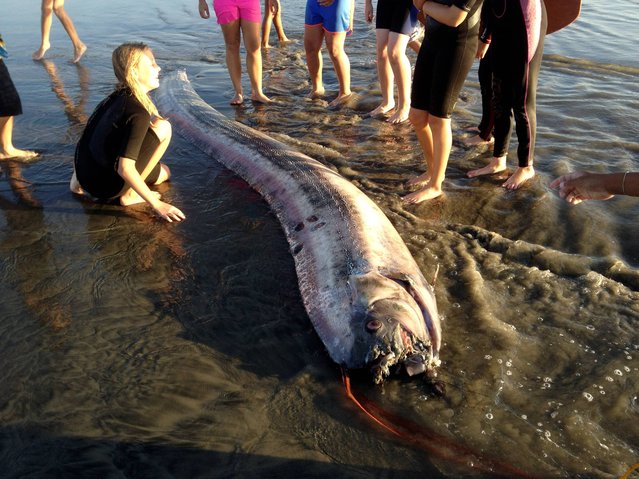 This Friday October 18, 2013 image provided by Mark Bussey shows an oarfish that washed up on the beach near Oceanside, Calif. This rare, snakelike oarfish measured nearly 14 feet long. According to the Catalina Island Marine Institute, oarfish can grow to more than 50 feet, making them the longest bony fish in the world. (Photo by Mark Bussey/AP Photo) 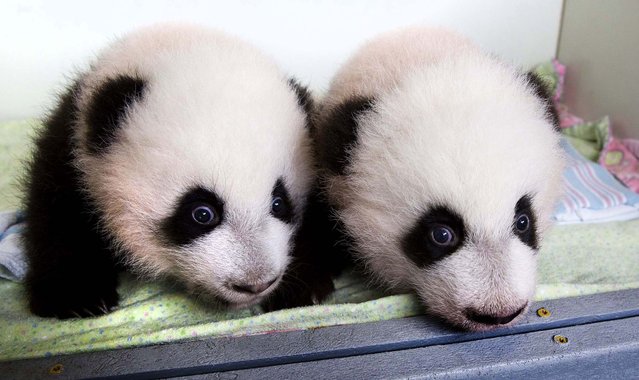 Mei Huan and Mei Lun, the first pair of twin Giant Panda cubs to be born in the United States and survive, are pictured at Zoo Atlanta, on Oktober 23, 2013. The cubs have been given names that come from a Chinese idiom meaning “something indescribably beautiful and magnificent”, zoo officials said. The names were announced when the male cubs reached 100 days old, in keeping with ancient Chinese tradition. (Photo by Adam K. Thompson/Zoo Atlanta)
Edit Del
26 Oct 2013 11:52:00, post received 0 comments
Publication archive:
←   →
Popular tags:
All tags
Last searches: