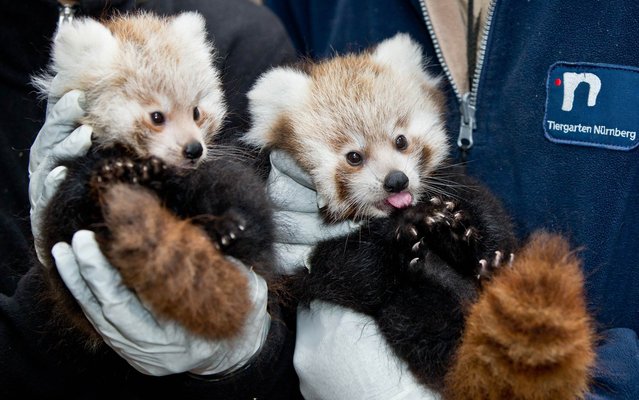 The Nuremberg Zoo in Germany on Friday released the first photos of a couple adorable red panda cubs born July 6, 2013, and boy are they ever cute. (Photo by Daniel Karmann/AFP Photo/DPA) 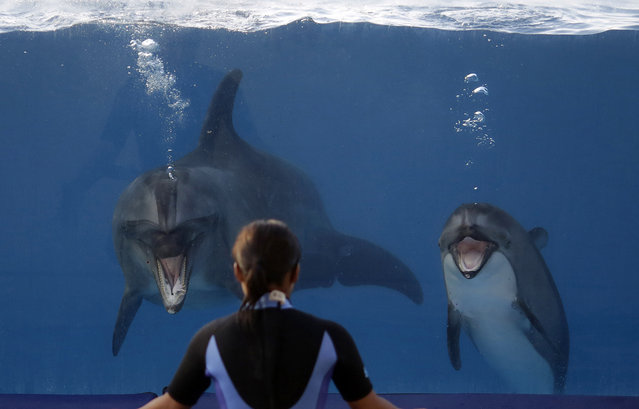 In this Wednesday, September 18, 2013 photo, two dolphins perform in a tank at Okichan Theater of the Okinawa Churaumi Aquarium in Motobu, on the southern island of Okinawa, Japan. Okinawa is Japan's southernmost prefecture and more than 300,000 foreign tourists visit to Okinawa every year. (Photo by Eugene Hoshiko/AP Photo) 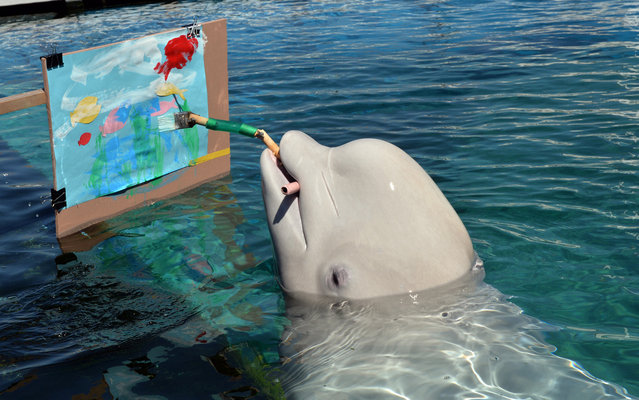 A Beluga paints a picture with a special paintbrush at the Hakkeijima Sea Paradise aquarium in Yokohama, suburban Tokyo on September 17, 2013. The aquarium will show the Beluga's new attraction from the end of this month. (Photo by Yoshikazu Tsuno/AFP Photo) 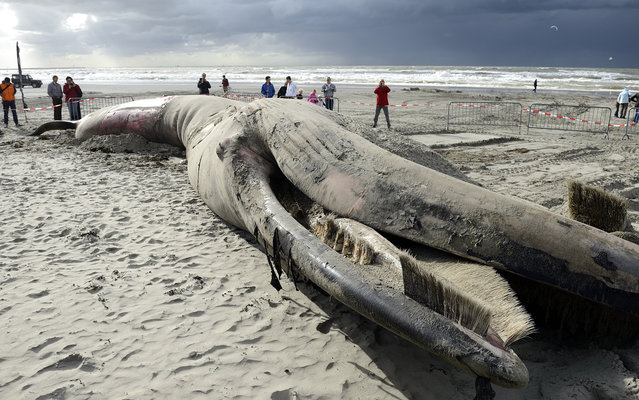 Viewers surround the carcass of a dead fin whale on the beach of Gravenzande, The Netherlands, on September 16, 2013. The six metre long whale was already dead when it stranded and was found on 15 September. (Photo by Lex Van Lieshout/AFP Photo) 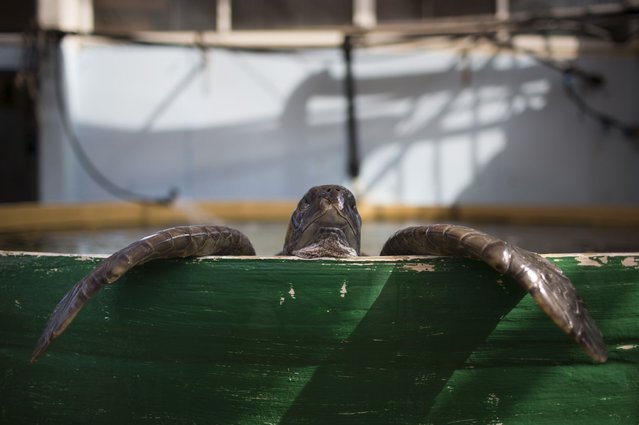 A blind Green turtle in it's pool at the sea turtle rescue center where the breeding stock of Green turtles undergoes a weekly washing and weighing on September 15, 2013 in Mikhmoret north of Netanya, Israel. From transplanting turtle nests during the nesting season to protected beaches, through the rescue and treatment of wounded turtles brought in by fishermen or washed up on Israel's shores, to the development of a long-range breeding program for the threatened Green turtles, the volunteers and staff of the Israeli Nature and Parks Authority are doing their best to protect the creatures. The numbers have dwindled in the Mediterranean to an estimated 450 nesting female Green turtles and about 2500 nesting female Loggerheads. Far removed from man-made obstacles and protected from their natural predators such as crabs, foxes and birds, the hatchlings make their race to the sea with the hope that more than 20 years later they will return to the same beach to ensure the species survival. (Photo by Uriel Sinai/Getty Images) 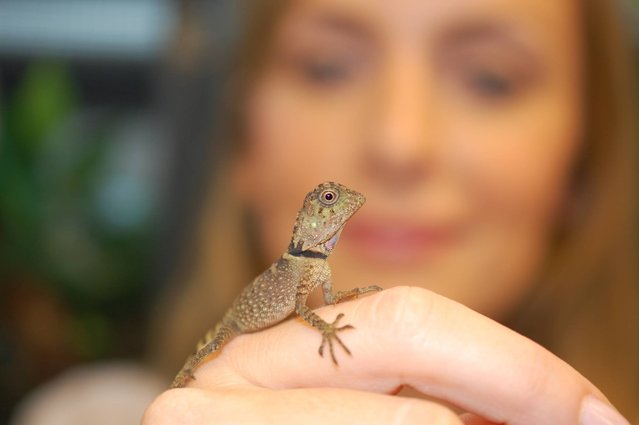 Chester Zoo undated handout photo of Keeper Ruth Smith with a rare baby Bell's anglehead lizard (Gonocephalus bellii) that has hatched at the Zoo and is believed to be the first ever be bred in the UK, September 18, 2013. (Photo by Matt Cook/Chester Zoo/PA Wire) 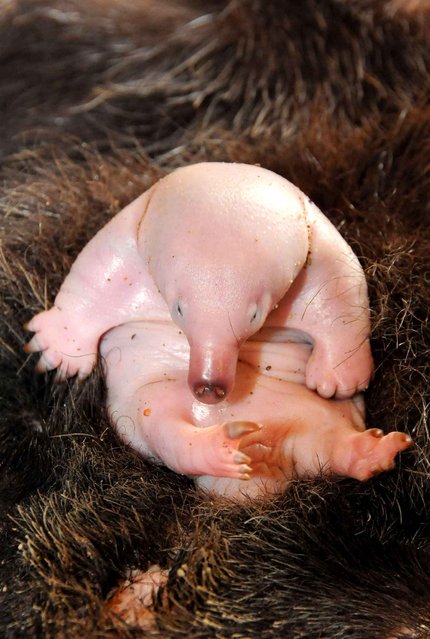 It's a 30-day-old Echidna baby, known as a “puggle” – one of only 24 ever bred in captivity. The proud parents are Tippy and Pickle of Australia Zoo. The tiny baby, whose s*x has not yet been identified, hatched from a soft egg and will continue to develop and nurse inside Tippy's warm pouch. (Photo by Australia Zoo/Rex/Sipa Press) 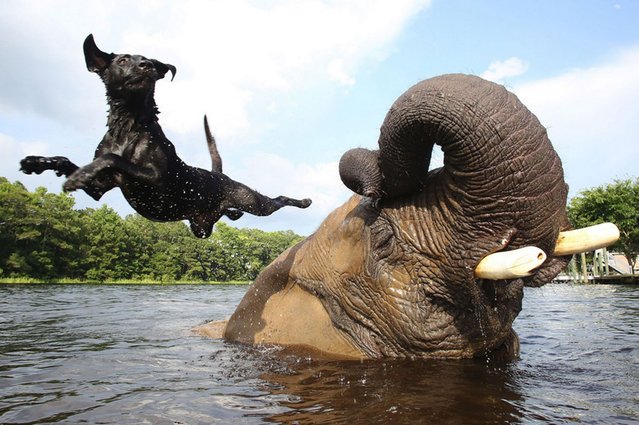 Bella, a 3 year old labrador, jumps off best friend Bubbles, a 32 year old African elephant. They both live together at Myrtle Beach Safari, South Carolina, on September 19, 2013. (Photo by Splash) 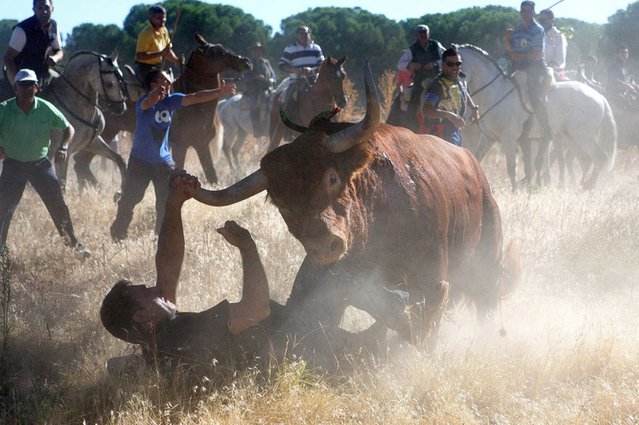 A bull charges over a photographer during the “Toro de la Vega” bull of the plain festival in Tordesillas, Spain, on September 19, 2013. (Photo by Pablo Blazquez Dominguez/Getty Images) 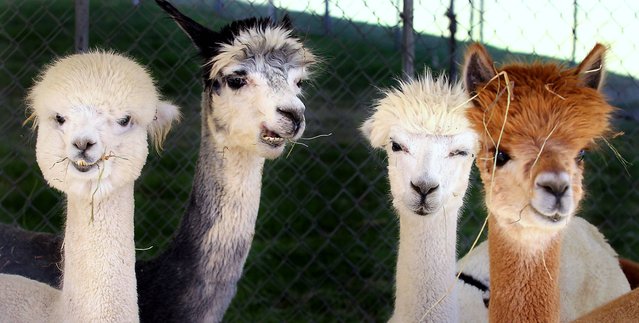 Four alpacas eat during the second day of the Kern County Fair on Thursday, September 19, 2013, in Bakersfield, Calif. The fair runs from September 18 through September 29. (Photo by Casey Christie/AP Photo/The Bakersfield Californian) 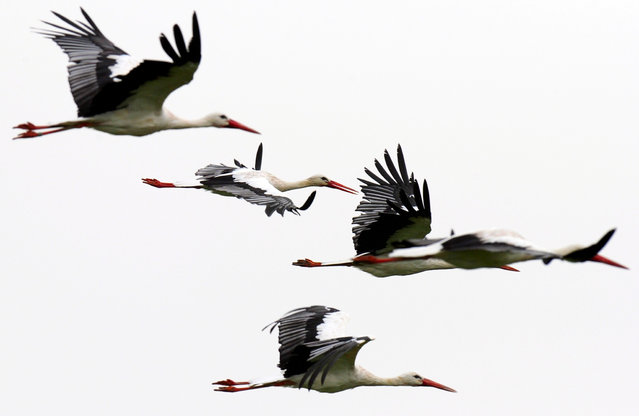 Storks fly over a meadow near Garding, northern Germany, on September 20, 2013. (Photo by Carsten Rehder/AFP Photo/DPA) 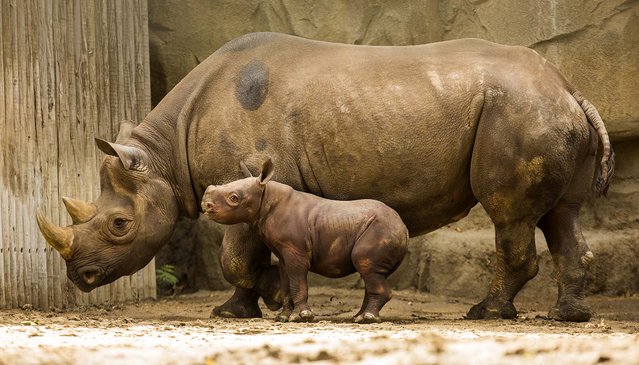