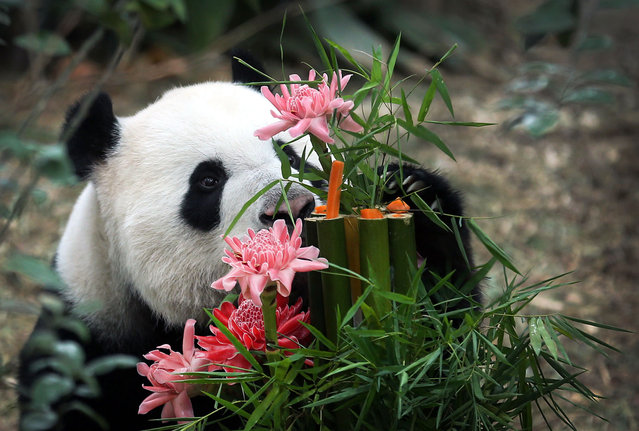 Kai Kai, a male Giant Panda sniffs at his custom-made birthday cake of bamboo, flowers and vegetables, Friday, Sept. 6, 2013, at the River Safari, part of the Wildlife Reserves and the Singapore Zoo in Singapore. Week-long celebrations were held to mark the first year anniversary of the arrival of two Giant Pandas from China, Kai Kai, and Jia Jia, who incidentally are celebrating their 6th and 5th birthdays, respectively this month. These Giant Pandas are on loan for 10-years as part of a collaboration between China and Singapore to raise awareness for the conservation of these critically endangered species. (Photo by Wong Maye-E/AP Photo) 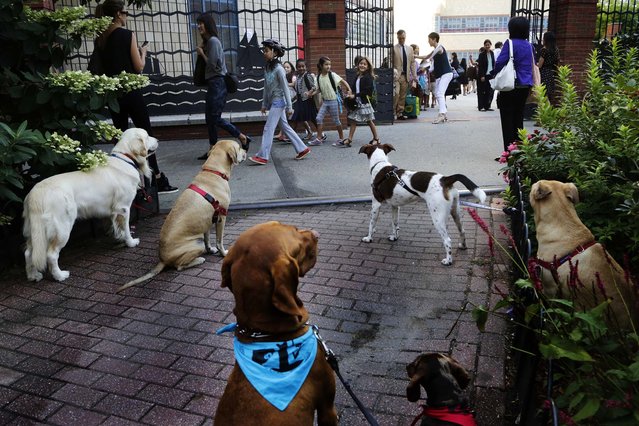 Dogs that are leashed to a fence outside of PS234 watch as schoolchildren line up to enter in New York, on September 9, 2013. The dogs were left outside by owners who brought their children to school. It's the first day back for New York City's 1 million public school students. (Photo by Mark Lennihan/Associated Press) 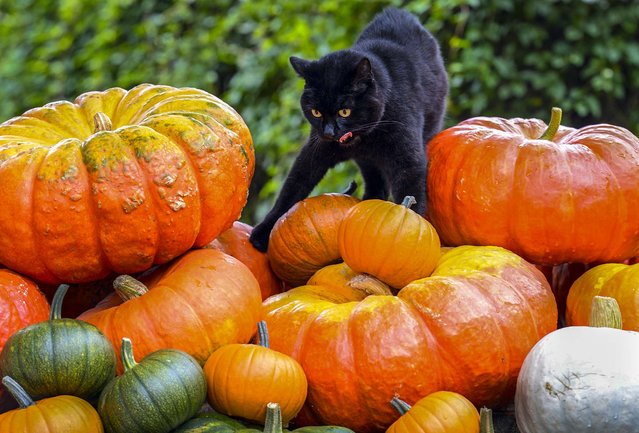 A black cat strolls over a pile of pumpkins at a farm near Potsdam, eastern Germany, on September 10, 2013. (Photo by Ralf Hirschberger/DPA) 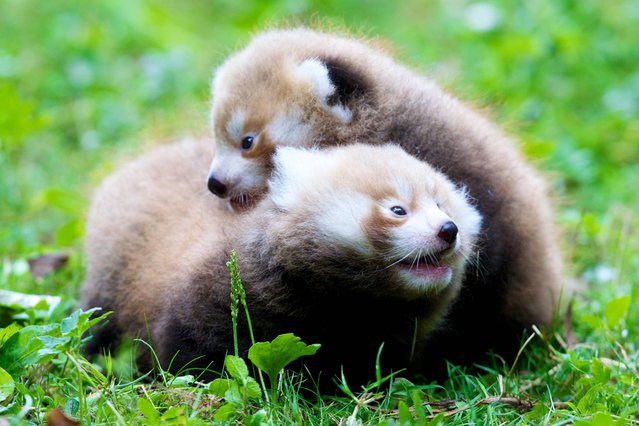 Dublin Zoo is delighted to announce the birth of two red pandas. Born on July 14th, the twins, one male and one female weighed approximately 150 grams. Although the cubs were born almost three months ago, it is only now they are starting to venture out of their den. The thriving newborns have a very strong bond with their parents. They are the 3rd litter born to parents Angelina and Chota. (Photo by Patrick Bolger) 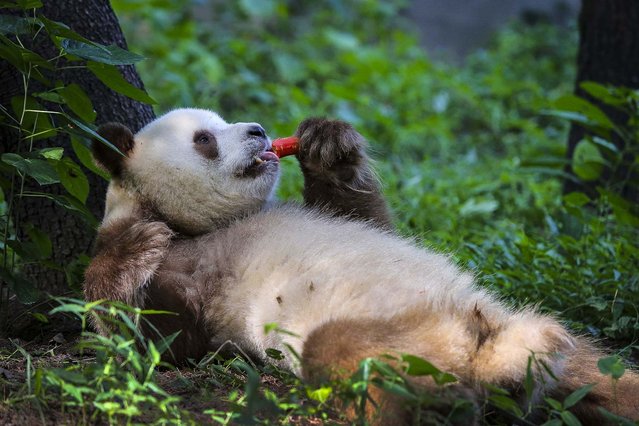 A Giant panda with rare brown-and-white fur eats a carrot at a natural conservation area in Qinling, Shaanxi province, September 6, 2013. The four-year-old giant panda was found in Qinling when it was a cub in 2009. (Photo by China Daily) 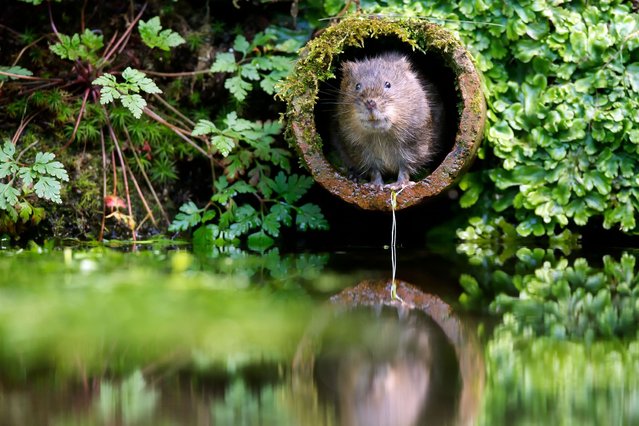 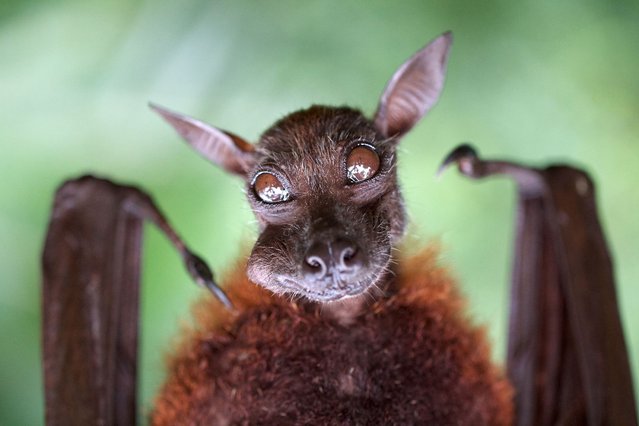 This bat gives a cheeky smile as he gobbles down his food at Singapore Zoo, on September 10, 2013. (Photo by Benny Iskander/HotSpot Media) 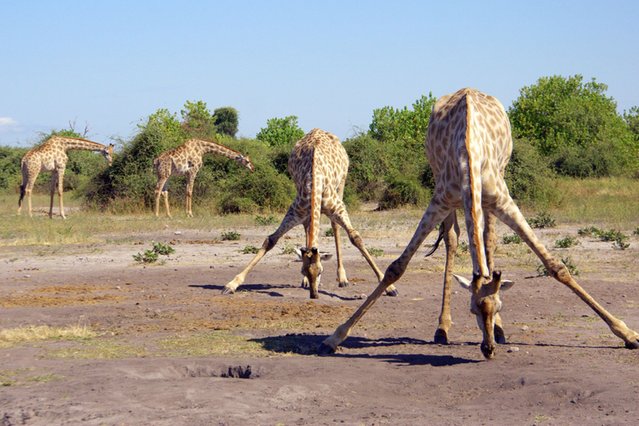 Photographer Chantelle Stobbe captured this group of four giraffes appearing to practise for Strictly as they “danced” together near the Chobe River in Botswana, on September 8, 2013. (Photo by Chantelle Stobbe/Barcroft Media) 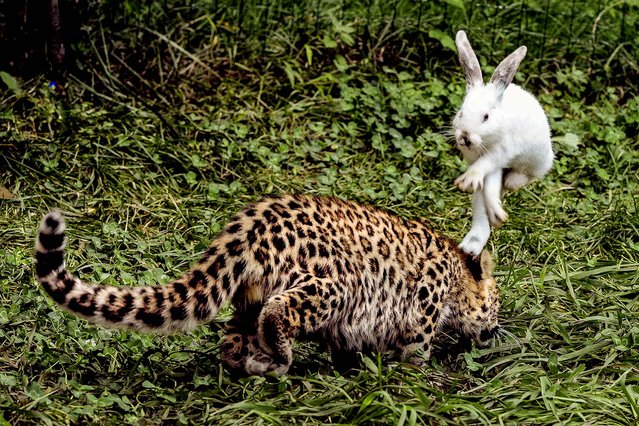 A rabbit hops to avoid a five-month-old leopard cub during a test of cubs' wild natural instincts at a wildlife park in Qingdao, Shandong province, on September 10, 2013. The test is part of the park's body examination procedure on recent born tigers, lions and leopards. (Photo by Reuters) 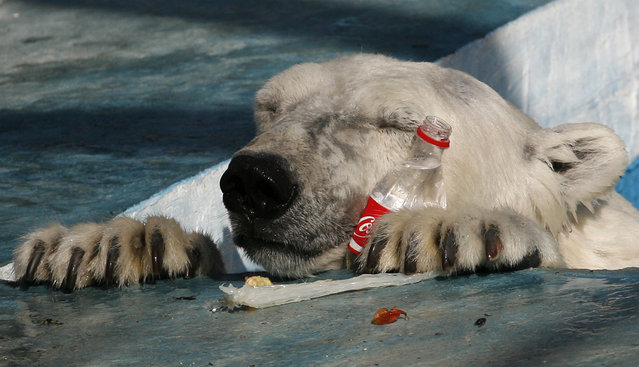 Aurora, a three-year-old female polar bear, plays with a plastic bottle in a pool in its new open air cage at the Royev Ruchey zoo on the suburbs of Russia's Siberian city of Krasnoyarsk. Aurora and her sister, Victoria, were found without their mother in Russia's Taymyr Peninsula on the Arctic Ocean coast in May 2010, and were later brought to the zoo in Krasnoyarsk. A zookeeper is planning to encourage breeding between Aurora and Felix, a male polar bear who was also found on the wildlife Russian Arctic Wrangel Island, a zoo representative said. (Photo by Ilya Naymushin/Reuters) 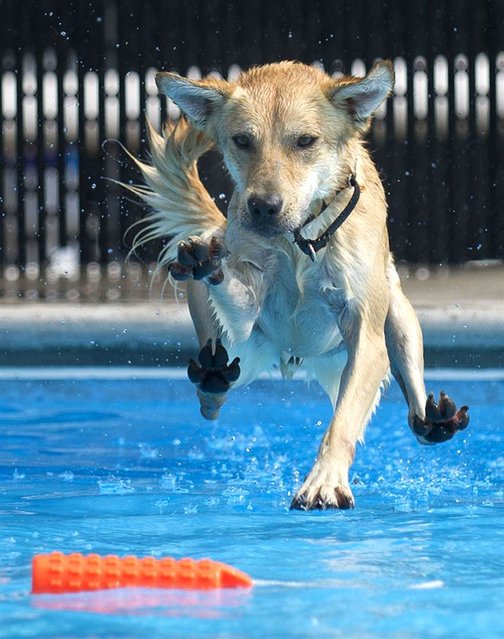 Pluto is about to make a splash during Doggie Dip Day at Inskip Pool in Knoxville, Tenn., on September 8, 2013. (Photo by Adam Lau/Knoxville News Sentinel via AP) 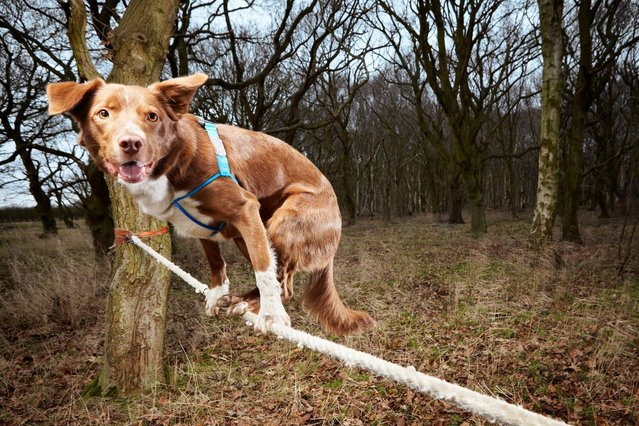 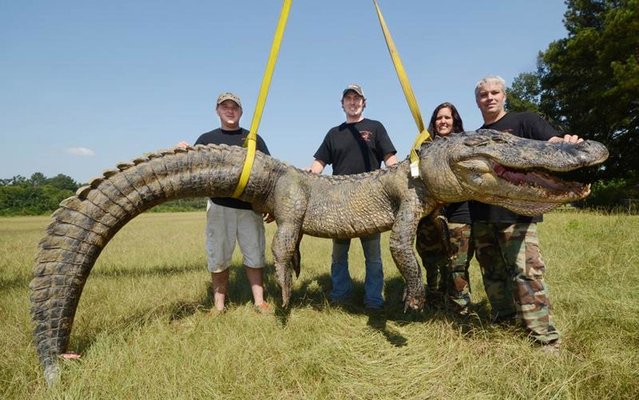 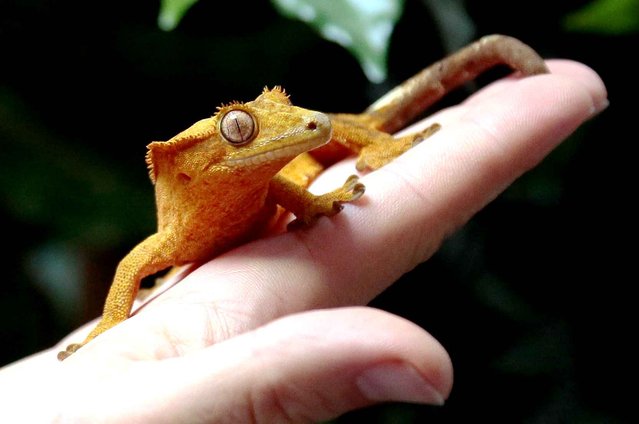 Karim Daoues, manager of The Tropical Farm, shows off a crested gecko on September 6, 2013 in Paris. (Photo by Jacques Demarthon/AFP Photo) 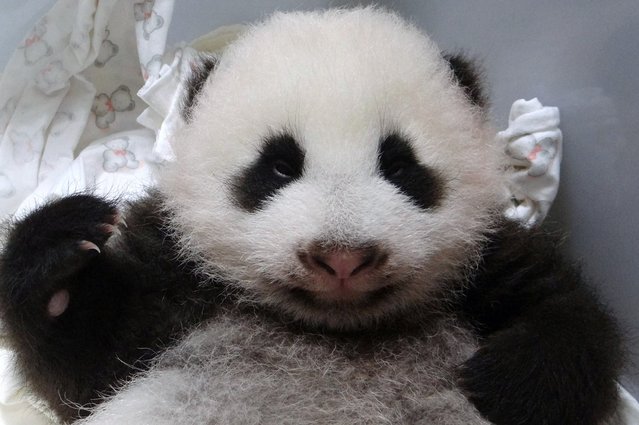 This handout photograph released by Taipei City Zoo on September 11, 2013 shows a panda cub at the Zoo. (Photo by AFP Photo/Getty Images) 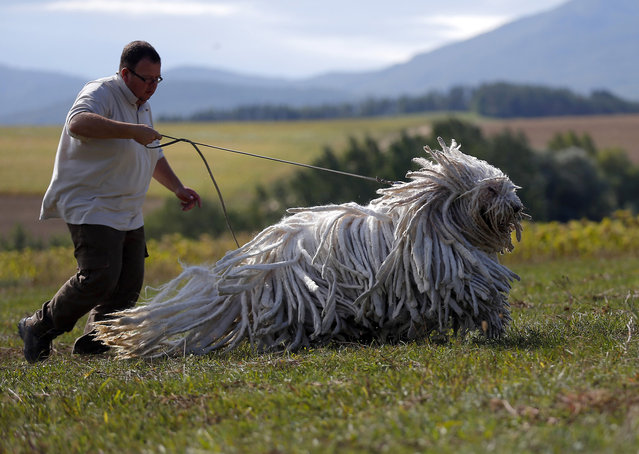 Kennel owner Gabor Korozs walks one of his Komondors, a traditional Hungarian guard dog, in Bodony, 130 km northeast of Budapest September 3, 2013. The kennel has won several awards but makes hardly any money as dogs without pedigrees have displaced pure breeds from the market in recent years. (Photo by aszlo Balogh/Reuters) 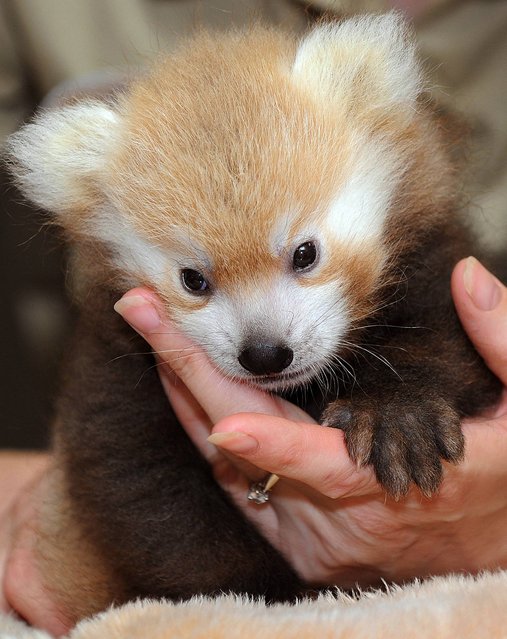