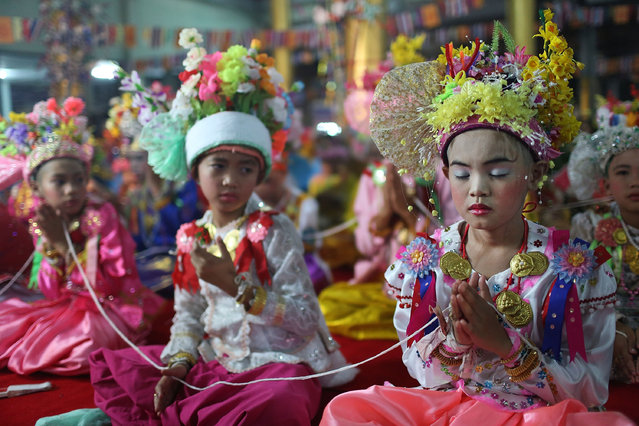 A Tai Yai boy prays during a ceremony on April 8, 2014 in Mae Hong Son, Thailand. Poy Sang Long is a Buddhist novice ordination ceremony of the Shan people or Tai Yai, an ethnic group of Shan State in Myanmar and northern Thailand, Young boys aged between 7 and 14 are ordained as novices to learn the Buddhist doctrines. It's believed that they will gain merit for their parents by ordaining. (Photo by Taylor Weidman/Getty Images) 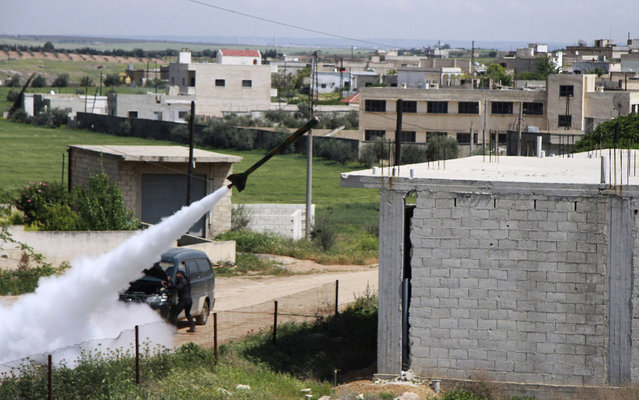 Fighters from the Tawhid Brigade, which operates under the “Free Syrian Army”, launch a locally made rocket towards forces loyal to President Bashar al-Assad in Muhrada, Hama province April 10, 2014. (Photo by Ahmad Rif/Reuters) 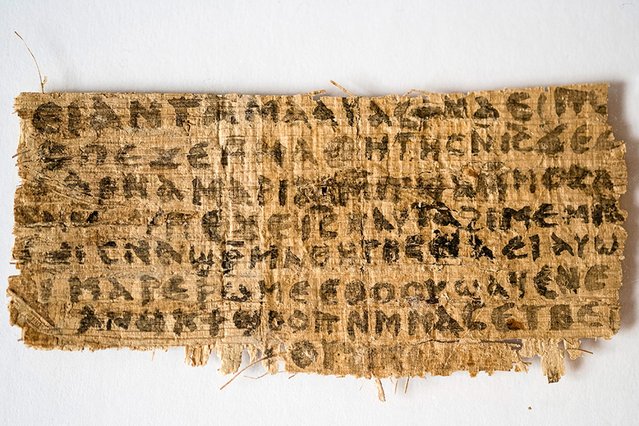 An ancient papyrus written in ancient Egyptian Coptic is pictured in this undated handout image provided by Harvard Divinity School. Scientists who examined a controversial fragment of papyrus written in Egyptian Coptic in which Jesus speaks of his wife concluded in papers published on April 10, 2014 that the papyrus and ink are probably ancient and not a modern forgery. (Photo by Karen L. King/Reuters/Harvard Divinity School) 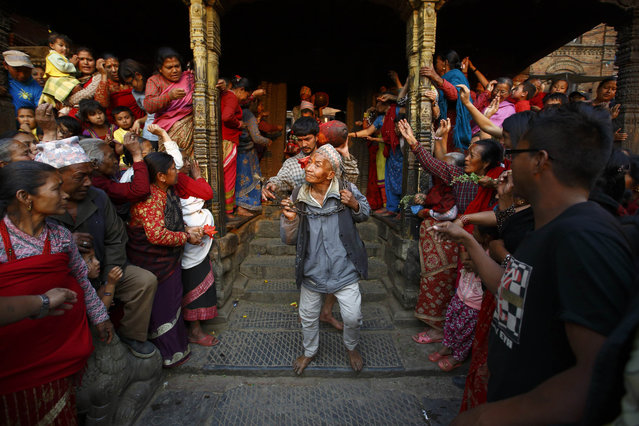 A priest ringing a bell walks out from the temple of God Bhairab during the Bisket festival at Bhaktapur April 10, 2014. The festival, which runs for more than a week and coincides with the Nepalese New Year, involves devotees offering prayers and the pulling of two chariots, one carrying the idol of God Bhairab and the other with the idol of Goddess Bhadrakali, around the ancient city of Bhaktapur. Devotees participate in the festival with the belief that they will be blessed with good health, fortune and harvest for the coming year. (Photo by Navesh Chitrakar/Reuters) 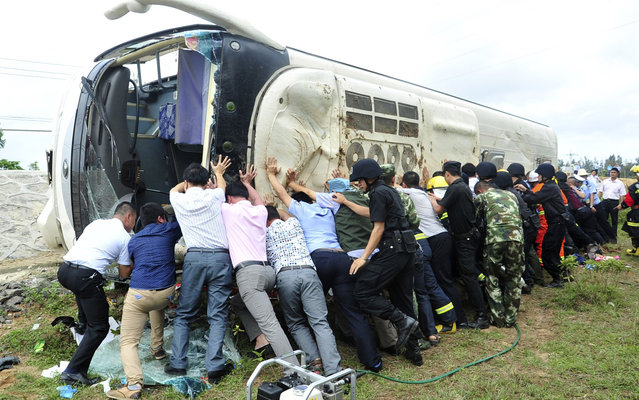 Rescuers attempt to push a bus upright, after it overturned while carrying students from a local primary school, next to a street in Wenchang, Hainan province April 10, 2014. Eight school children died in a bus crash on China's southern island province of Hainan on Thursday on their way to a school outing, state media reported. (Photo by Reuters/China Daily) 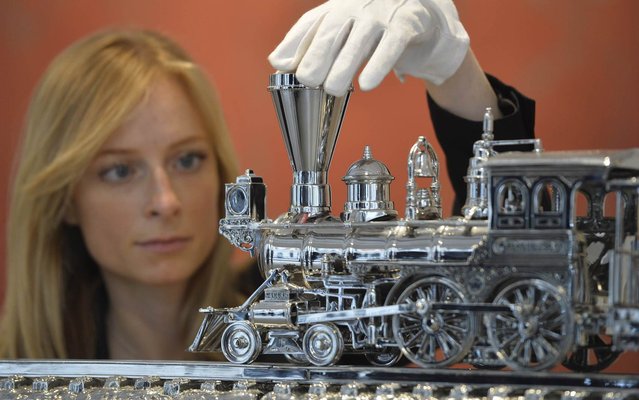 A Christie's employee poses with “The Jim Beam J. B. Turner Train” sculpture by U.S. artist Jeff Koons at Christie's auction house in central London, April 11, 2014. The steel piece has a predicted auction sale estimate of US$25 to 35 million (£15-21 million) and forms part of the Christie's Post-War and Contemporary Art sale in New York on May 13. (Photo by Toby Melville/Reuters) 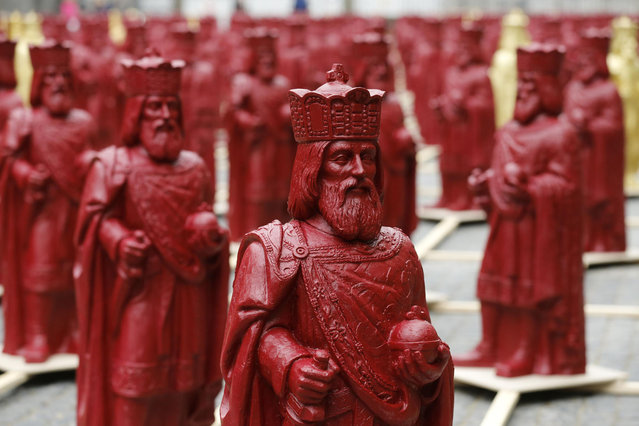 Charlemagne plastic sculptures by German concept artist Ottmar Hoerl stand in the western German city of Aachen April 11, 2014. On the occasion of the Aachen Charlemagne Year and the 1200th anniversary of Charlemagne's death, concept artist Hoerl is presenting his installation project on the centrally located Katschhof area for two weeks beginning April 12, 2014. (Photo by Wolfgang Rattay/Reuters) 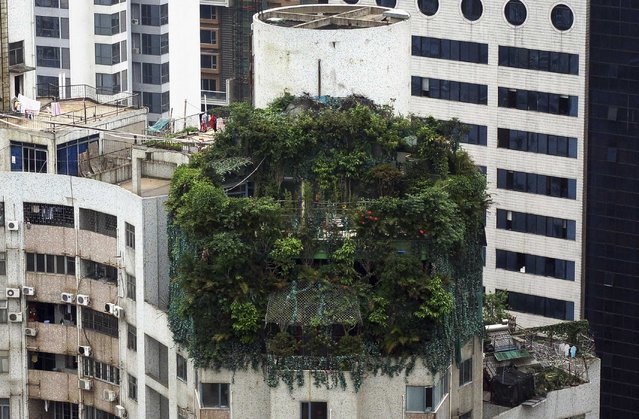 A suspected illegal construction is seen covered by green plants atop a 19-storey residential building in Guangzhou, Guangdong province April 11, 2014. The suspected illegal construction, which takes up an area of about 40 square metres, was built 10 years ago. Local law enforcement department discovered the construction back in 2012, but have failed to find the owner since then, local media reported. (Photo by Reuters/China Daily) 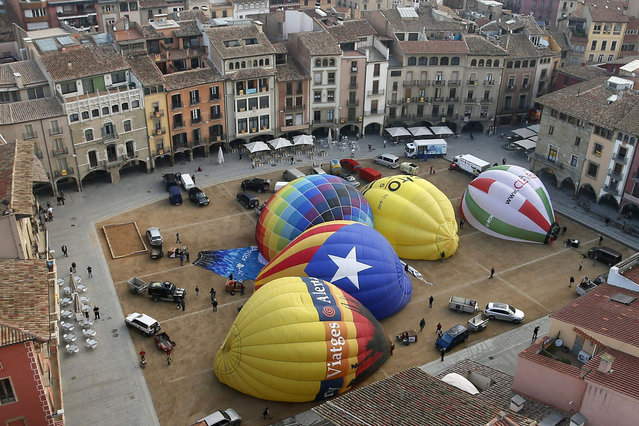 A hot air balloon (2nd L) in the colours of the Estelada (the Catalan seperatist flag) is pictured among other balloons as they are inflated, during the XXXI International Mercat del Ram Balloon Trophy 2014, at the main square in Vic April 11, 2014. Catalonia's regional parliament unanimously adopted a declaration of self-determination saying the people had the right to vote on breaking away from the rest of Spain. Mas has promised to hold a referendum on secession from Spain November 9, saying Catalonia should be a separate state within the European Union and the euro zone. (Photo by Gustau Nacarino/Reuters) 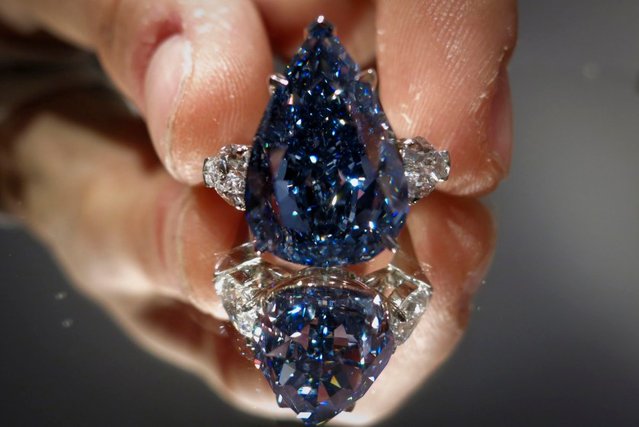 Rahul Kadakia, Head of Jewelry for Christie's Auction House holds “The Blue” diamond in New York, April 11, 2014. Christie's New York is displaying the largest flawless fancy vivid blue diamond ever to appear at auction. The diamond is pegged at $21 million to $25 million and is the highlight of an upcoming Magnifient Jewels sale in Geneva. (Photo by Carlo Allegri/Reuters) 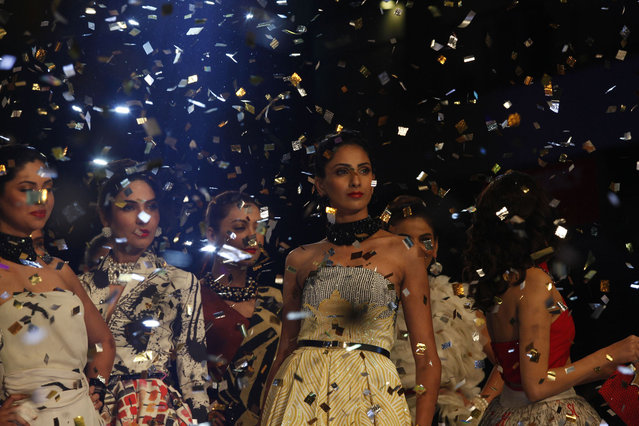 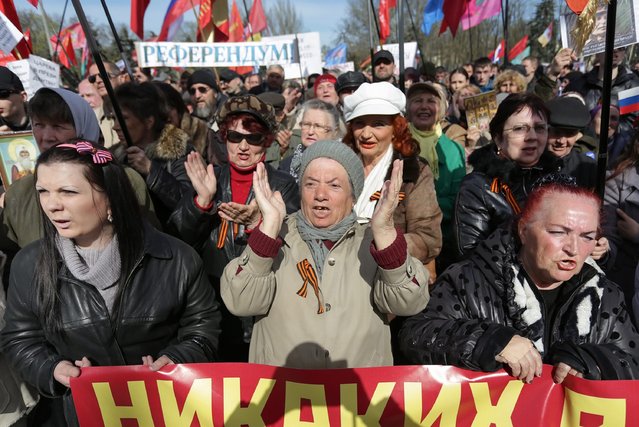 Pro-Russian protesters attend a rally in Odessa, Ukraine, 06 April 2014. Protesters called for referendum on the status of the Odessa regions, similar to the recently held referendum in Crimea. (Photo by Anastasia Vlasova/EPA) 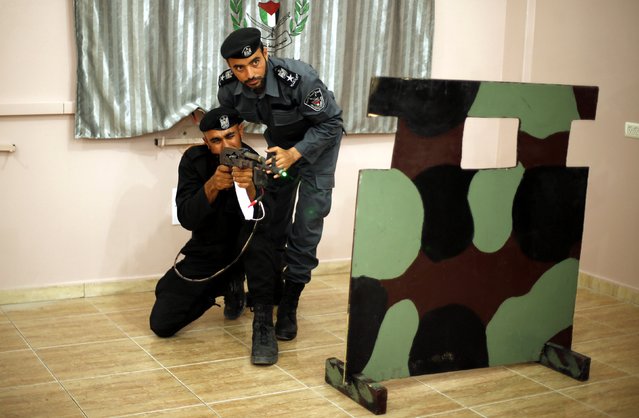 A member of Palestinian security forces loyal to Hamas aims a weapon during a training session which involves using laser to shoot at electronic targets, in Gaza City April 10, 2014. Laser is used to replace live bullets in training sessions as a measure to save costs, the Hamas-run ministry of interior said. (Photo by Suhaib Salem/Reuters) 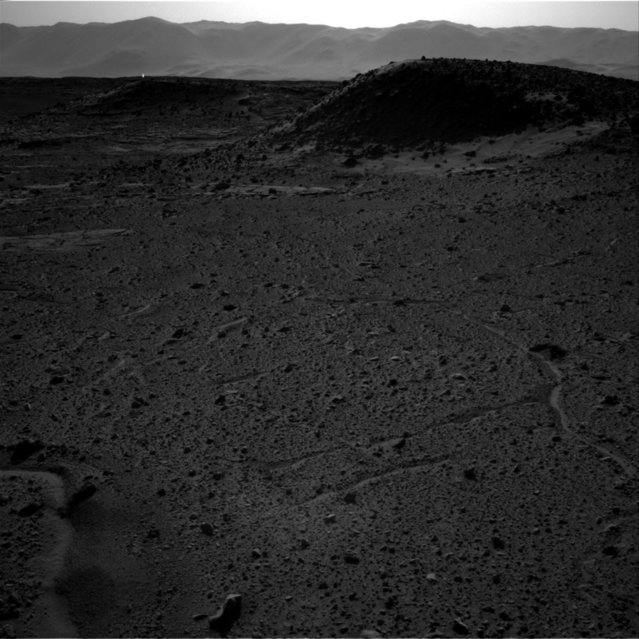 A handout photo provided by NASA on 09 April 2014 shows an image from the Navigation Camera (Navcam) on NASA's Curiosity Mars rover including a bright spot near the upper left corner. The sun is in the same direction, west-northwest, above the frame. Bright spots appear in images from the rover nearly every week. Typical explanations for them are cosmic rays hitting the light detector or sunlight glinting from rocks. The right-eye camera of the stereo Navcam recorded this frame during the afternoon of the 589th Martian day, or sol, of Curiosity's work on Mars (03 April 2014), from the site where the rover reached a waypoint called 'the Kimberley' by that sol's drive. An image taken by the Navcam's left-eye camera within one second of the same time does not include a bright spot of this type. One possible explanation for the bright spot in this image is a glint from a rock surface reflecting the sun. Another is a cosmic ray hitting the camera's light detector, a CCD (charge-coupled device), NASA explained in its corresponding media release. Cosmic ray patterns in Mars rover images vary from a dot to a long line depending on the angle at which the ray strikes the detector, their explanation said. (Photo by EPA/NASA/JPL-Caltech) 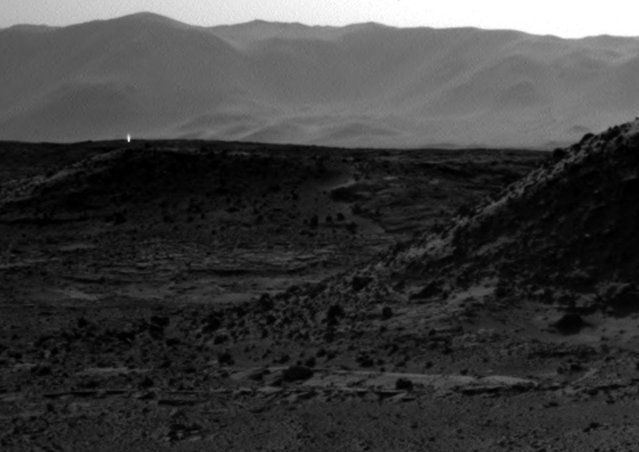 A handout photo provided by NASA on 09 April 2014 shows an image from the Navigation Camera (Navcam) on NASA's Curiosity Mars rover including a bright spot near the upper left corner. (Photo by EPA/NASA/JPL-Caltech) 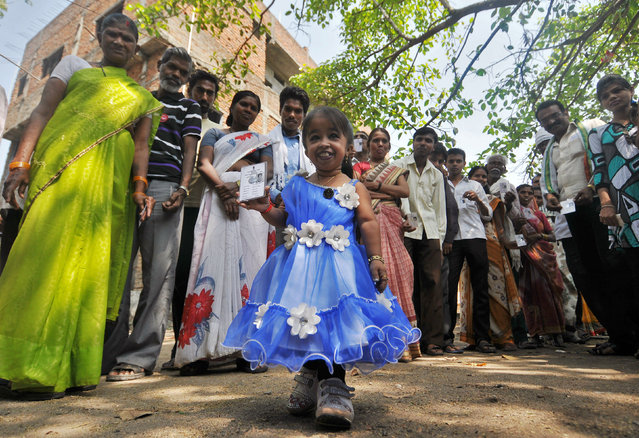 Jyoti Amge, 20, a first time voter, shows her voting card as she arrives to cast her vote in the central Indian city of Nagpur April 10, 2014. Amge has been certified by the Guinness World Records as the shortest woman in the world. Around 815 million people have registered to vote in the world's biggest election – a number exceeding the population of Europe and a world record – and results of the mammoth exercise, which concludes on May 12, are due on May 16. (Photo by Reuters) 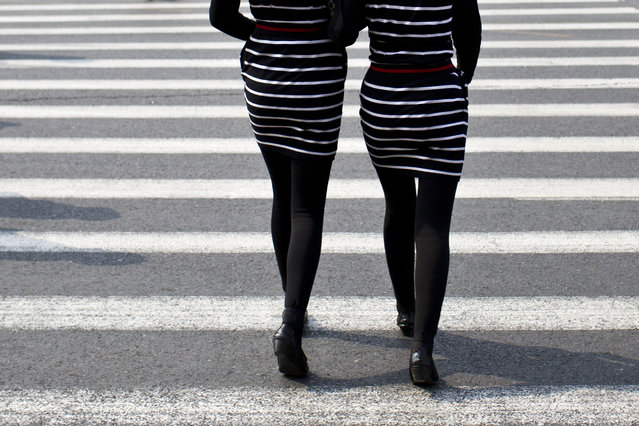 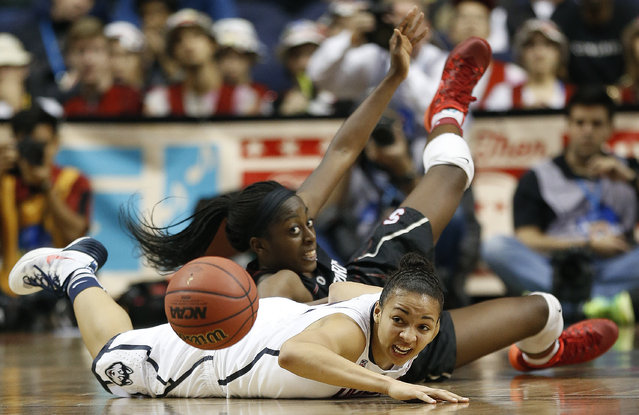 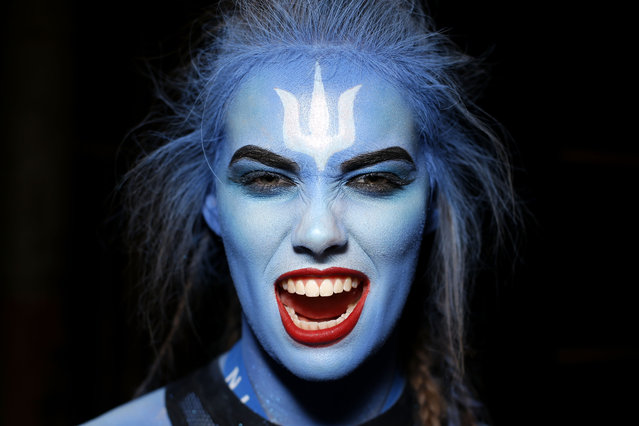 A model poses backstage ahead of the NLP show at Mercedes-Benz Fashion Week Australia 2014 at Carriageworks on April 7, 2014 in Sydney, Australia. (Photo by Brendon Thorne/Getty Images) 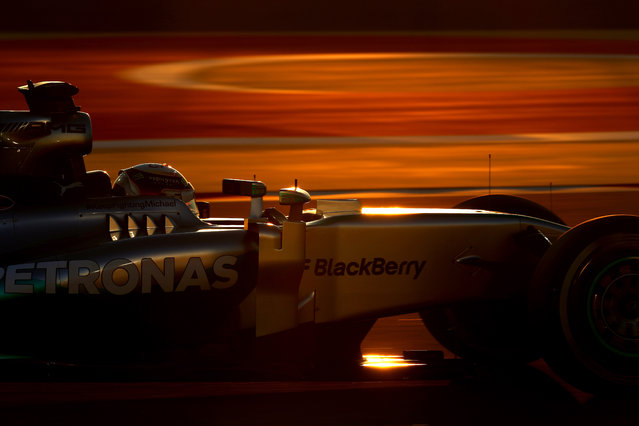 Lewis Hamilton of Great Britain and Mercedes GP drives on his way to winning the Bahrain Formula One Grand Prix at the Bahrain International Circuit on April 6, 2014 in Sakhir, Bahrain. (Photo by Paul Gilham/Getty Images) 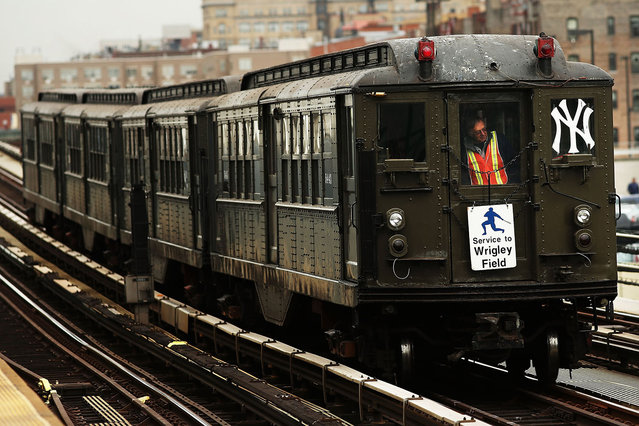 A historical subway train is used for the 2014 home opener game at Yankee stadium on April 7, 2014 in New York City. The Monday afternoon game against the Baltimore Orioles will feature Derek Jeter, the first home game of his final season for the Yankees. (Photo by Spencer Platt/Getty Images) 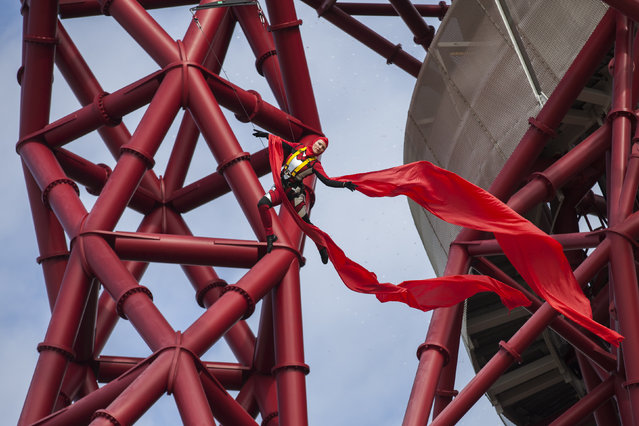 An acrobat abseils from the 114.5 metre high ArcelorMittal Orbit tower at the Olympic Park on April 5, 2014 in London, England. The Queen Elizabeth Olympic Park in east London has opened to the public for the first time since the London 2012 Games. It is the biggest park to be opened in London for a century and it is hoped that the attraction will revitalise the neighbourhood and attract tourists. (Photo by Rob Stothard/Getty Images) 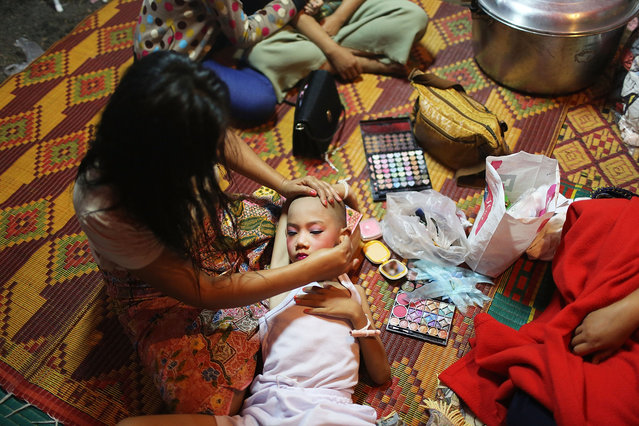 A Tai Yai boy has makeup applied by his mother early in the morning before his ordination on April 9, 2014 in Mae Hong Son, Thailand. Poy Sang Long is a Buddhist novice ordination ceremony of the Shan people or Tai Yai, an ethnic group of Shan State in Myanmar and northern Thailand. Young boys aged between 7 and 14 are ordained as novices to learn the Buddhist doctrines. It's believed that they will gain merit for their parents by ordaining. (Photo by Taylor Weidman/Getty Images) 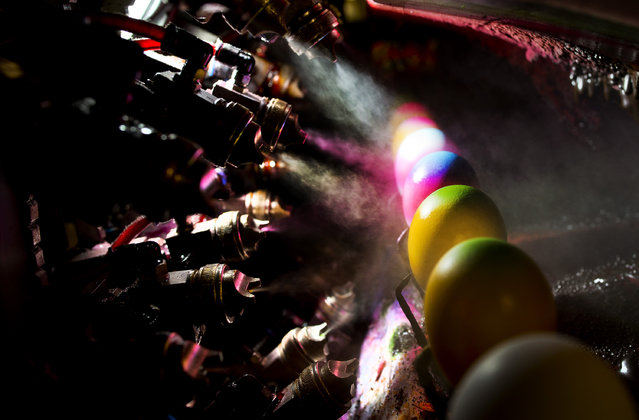 Chicken eggs are coloured for Easter at Baumeister Frischei egg and chicken farm on April 10, 2014 in Breckerfeld, Germany. The farm is among the biggest egg producers in the region, producing 120,000 chicken eggs daily to meet demand for its brightly-coloured eggs two weeks before Easter. (Photo by Sascha Schuermann/Getty Images) 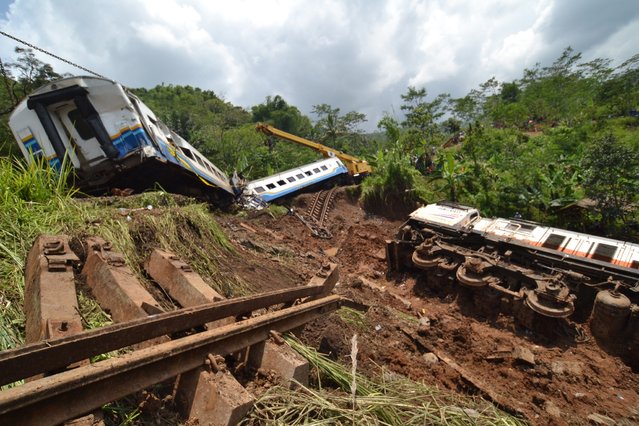 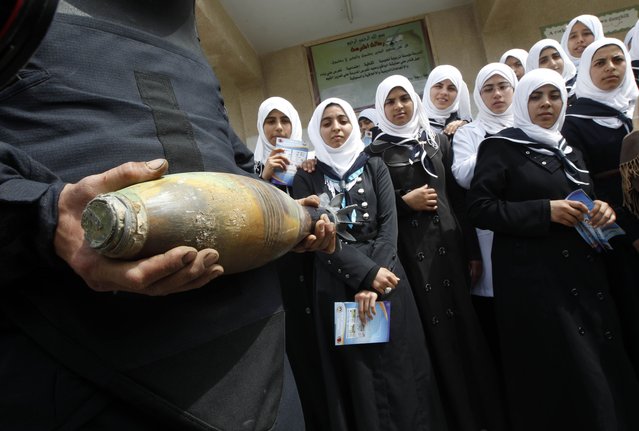 A Palestinian explosives expert loyal to the ruling Hamas movement holds a mortar shell as he explains to schoolgirls the danger of unexploded ordnance on April 7, 2014 at a school in Khan Younis in the southern Gaza. (Photo by Said Khatib/AFP Photo) 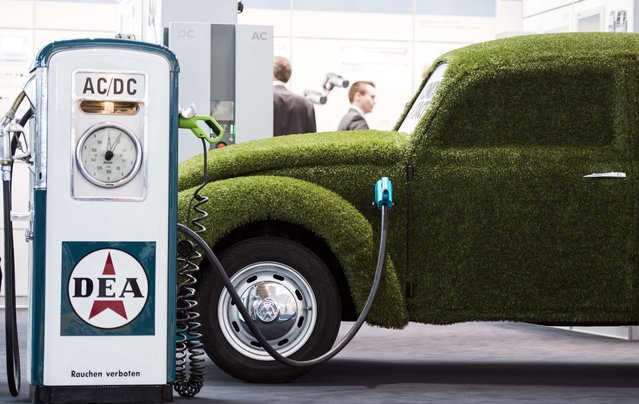 A grass covered mock VW electronic beetle car is pictured at the Hannover Messe industrial trade fair in Hanover, central Germany on April 7, 2014. The Netherlands is the partner country of this year's trade fair running from April 7 to 11, 2014 and presenting a cross section of key industrial technologies. (Photo by Johannes Eisele/AFP Photo) 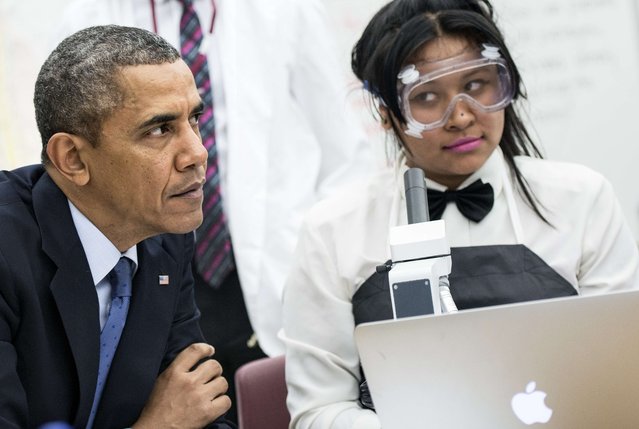 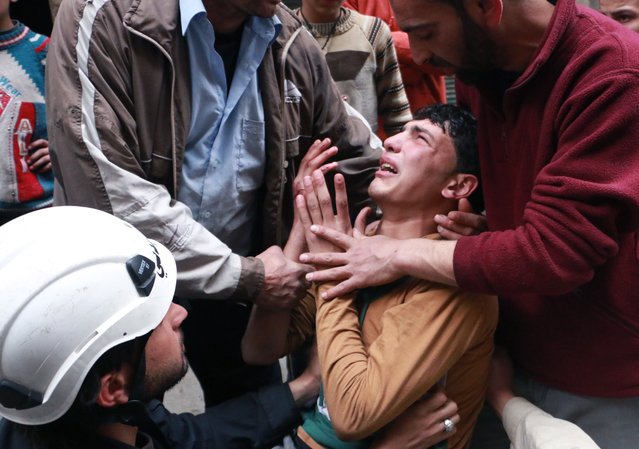 A man is comforted by a rescue worker and others following a reported air strike by government forces in which a fellow rescue worker was killed on March 8, 2014 in the northern city of Aleppo. More than 140,000 people have been killed in Syria since the start of a March 2011 uprising against the Assad family's 40-year rule. (Photo by Fadi Al-Halabi/AFP Photo/AMC) 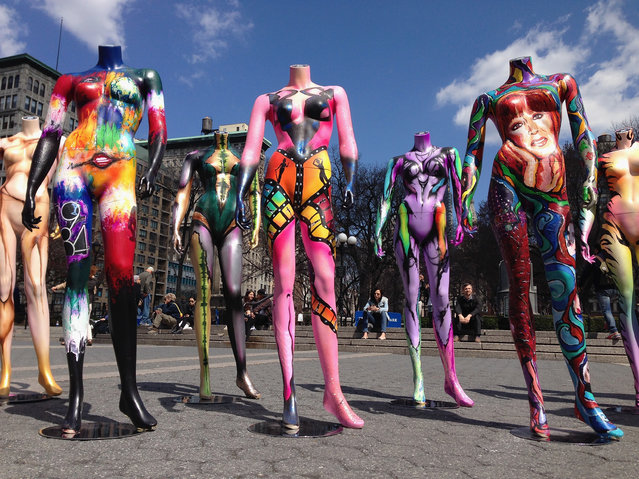 A dozen mannequins stand on display on a sunny spring day in Union Square on April 9, 2014 in New York City. The display, called #MakeupArtForever, was set up throughout Manhattan to celebrate the 30th anniversary of the Make Up Forever brand. (Photo by John Moore/Getty Images)
Edit Del
12 Apr 2014 13:06:00, post received 0 comments
Publication archive:
←   →
Popular tags:
All tags
Last searches: