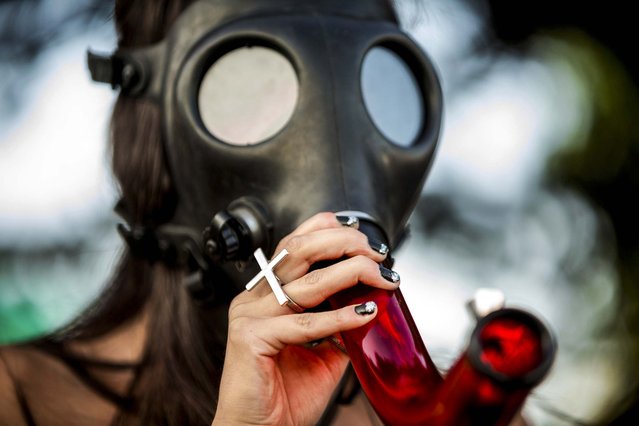 A woman smokes a mask bong on the final day of Hempfest, Seattle's annual gathering to promote the legalization of marijuana, on August 17, 2014. (Photo by Jordan Stead/Seattlepi.com) 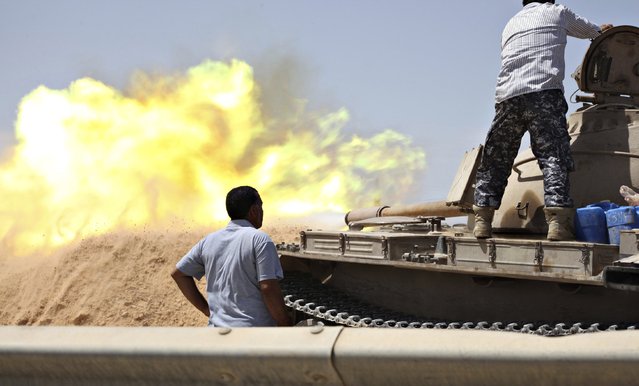 A tank belonging to the Western Shield, a branch of the Libya Shield forces, fires during a clash with rival militias around the former Libyan army camp, Camp 27, in the 27 district, west of Tripoli, August 22, 2014. (Photo by Reuters/Stringer) 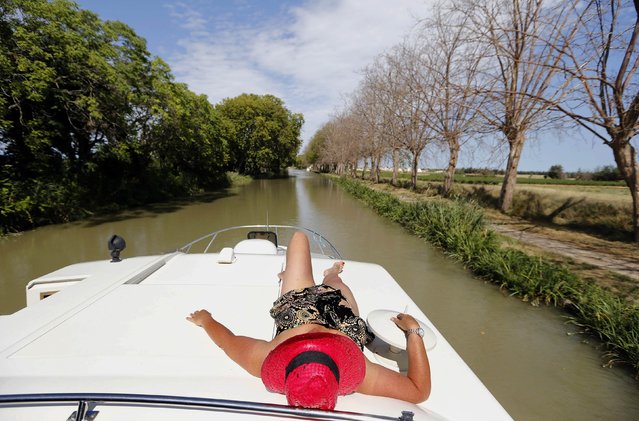 A tourist from Britain takes in the sun on a river boat near Homps along the Canal du Midi, southwestern France, August 12, 2014, during summer holidays. This 360-km network of navigable waterways links the Mediterranean and the Atlantic Ocean through locks, aqueducts, bridges and tunnels. An UNESCO World Heritage site, the Canal du Midi, built between 1667 and 1694, it is a remarkable feat of civil engineering, paving the way for the Industrial Revolution. (Photo by Regis Duvignau/Reuters) 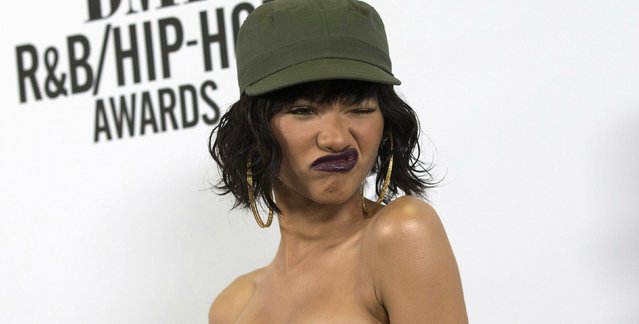 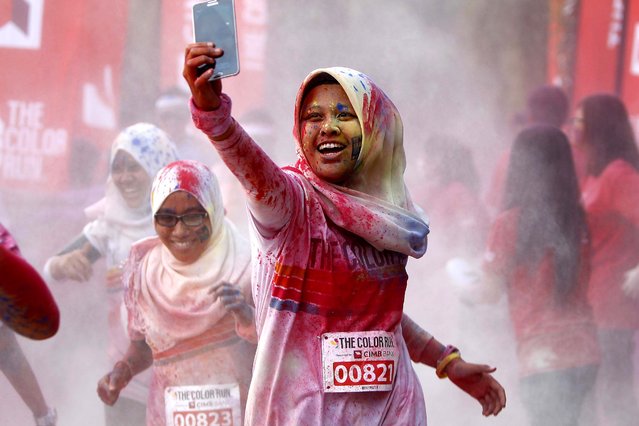 A participant takes a selfie as she runs through a “color station” during the five-kilometer color run event in Kuala Lumpur, Malaysia, Sunday, August 17, 2014. (Photo by Lai Seng Sin/AP Photo) 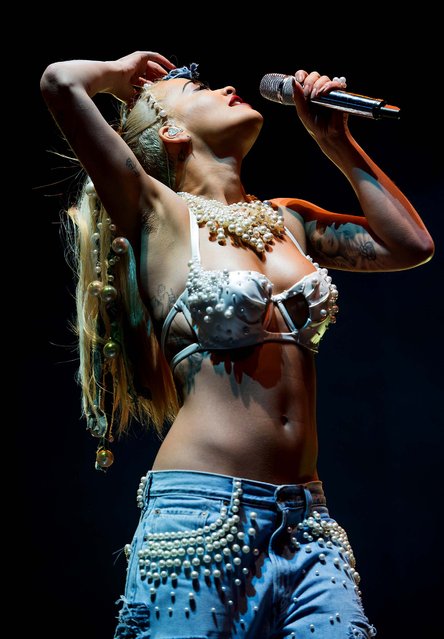 Rita Ora performs on the Virgin Media stage during Day 2 of the V Festival at Hylands Park on August 17, 2014 in Chelmsford, England. (Photo by Ian Gavan/Getty Images) 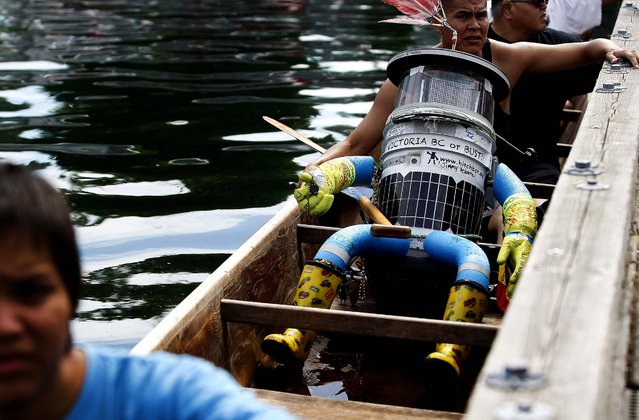 Hitchbot, Canada's hitchhiking robot, has made it's way across the country from Halifax to its final stop in Victoria, British Columbia, completing its 6,000k journey in three weeks as it arrives in a 50-foot cedar canoe with Songhees Nation members, for a traditional Coast Salish welcome at the inner harbor in Victoria, on August 18, 2014. (Photo by Chad Hipolito/The Canadian Press) 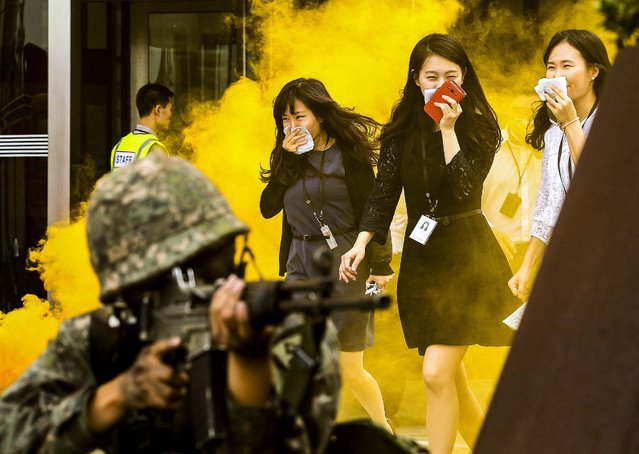 People evacuate from a building during a civil defense drill against possible attacks by North Korea, as part of the annual Ulchi Freedom Guardian exercise in Seoul, South Korea, on August 20, 2014. (Photo by Ahn Young-joon/Associated Press) 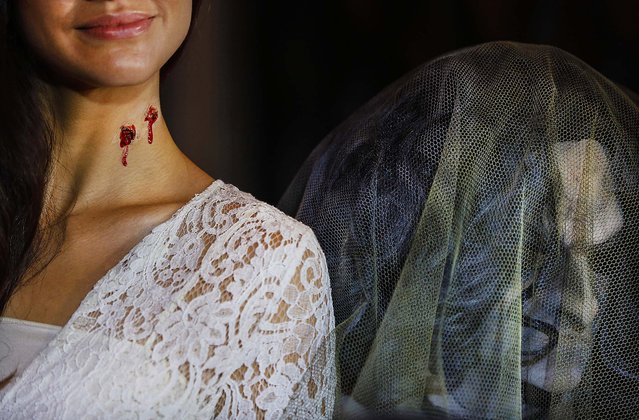 Model Rosemary Vandenbroucke poses for photographers during a press conference to launch the American haunted attraction “Fright Dome”, an indoor theme park which will open in Hong Kong, on August 20, 2014. (Photo by Kin Cheung/Associated Press) 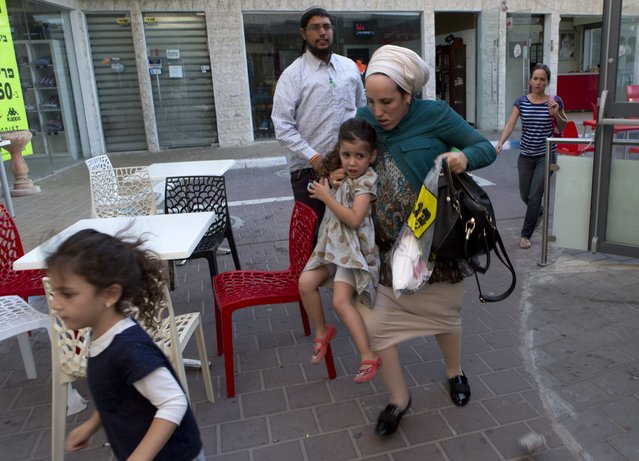 A religious Israeli family running across a parking area towards a shelter among some shops in the southern Israeli town of Sderot as a “red alert” siren sounds, 21 August 2014, signaling a rocket attack launched from the Gaza Strip is heading towards this border community. The young girl fell and the mother picked her up and carried her into the shelter. Some seconds later a boom, thud was heard signaling the incoming rocket was intercepted by an Iron Dome interceptor. Israelis in this town have seconds to get into a shelter as it is located about one kilometer or one half mile from the northern Gaza Strip border, and over the years is the most common target for Hamas and other Palestinian militants' rockets. (Photo by Jim Hollander/EPA) 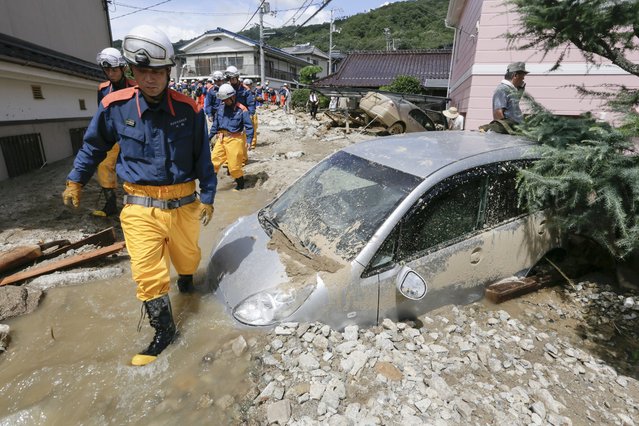 Rescue workers walk pass a damaged car as they arrive for shift change at a landslide site in Hiroshima, Hiroshima Prefecture, western Japan, 21 August 2014. About 2,500 rescuers searched for survivors a day after landslides killed 39 people in western Japan following torrential rain, a report said. Seven people were still missing after more than 200 millimetres of rain in three hours pounded the northern part of Hiroshima city in the early hours of 20 August, Japanese broadcaster NHK reported. (Photo by Kimimasa Mayama/EPA) 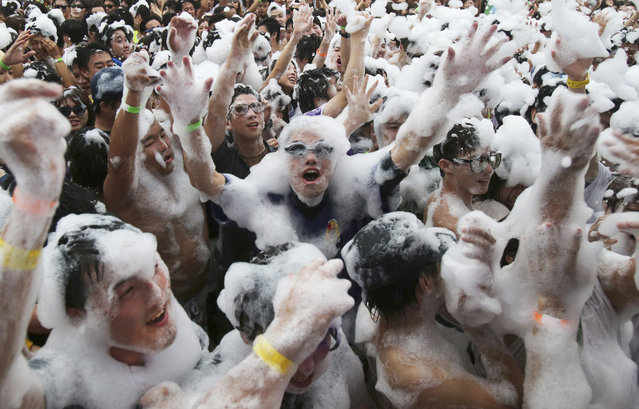 Participants covered in soap bubbles enjoy a summer event to cool them off at Toyosu Magic Beach in Tokyo Saturday, August 16, 2014. (Photo by Koji Sasahara/AP Photo) 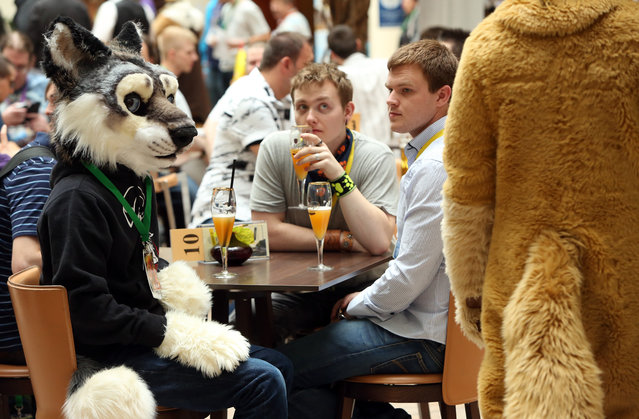 Furry enthusiasts attend the Eurofurence 2014 conference on August 22, 2014 in Berlin, Germany. Furry fandom, a term used in zines as early as 1983 and also known as furrydom, furridom, fur fandom or furdom, refers to a subculture whose followers express an interest in anthropomorphic, or half-human, half-animal, creatures in literature, cartoons, pop culture, or other artistic contexts. Many but not all of the followers of the movement wear furry animal costumes. The earliest citation of anthropomorphic literature regularly cited by furry fans is Aesop's Fables, dating to around 500 BC. (Photo by Adam Berry/Getty Images) 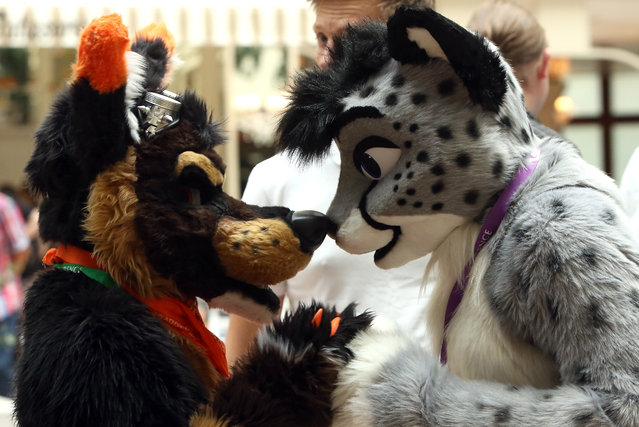 Furry enthusiasts greet one another at the Eurofurence 2014 conference on August 22, 2014 in Berlin, Germany. (Photo by Adam Berry/Getty Images) 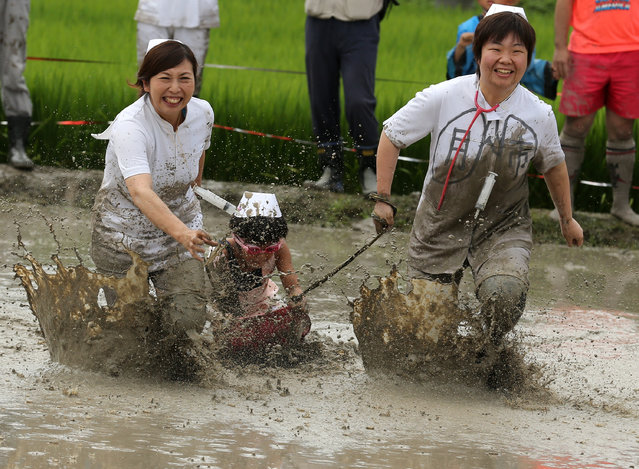 Japanese festival-goers dressed in medical costumes play with boat skiing board in the mud during the village mud festival at Yumesaki muddy paddy field on August 17, 2014 in Himeji, Japan. The festival has been held annually to encourage youths of the village to participate in the community. (Photo by Buddhika Weerasinghe/Getty Images) 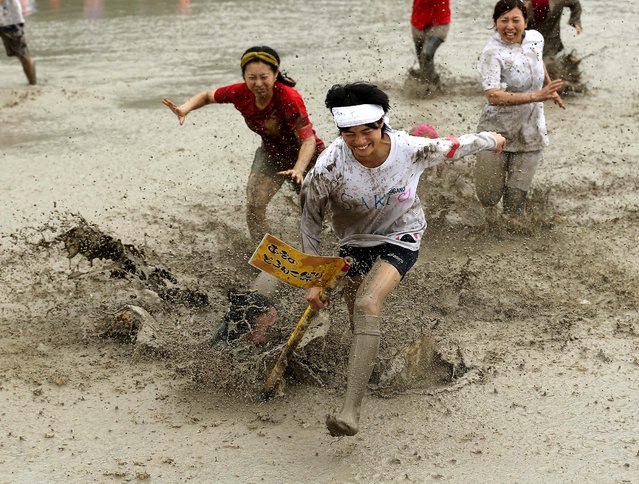 Festival-goers run through the mud to grab the winning flag during the village mud festival in Himeji, Japan, on August 17, 2014. (Photo by Buddhika Weerasinghe/Getty Images) 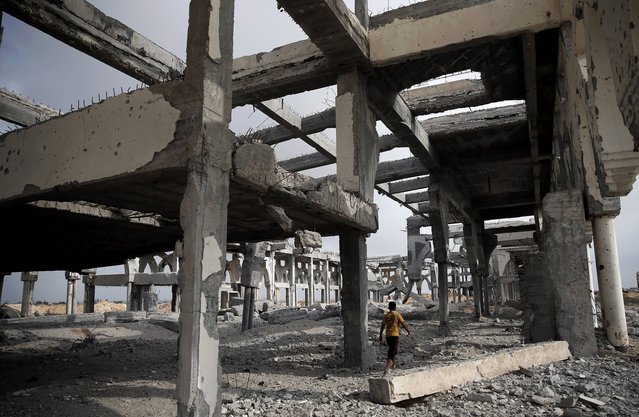 A Palestinian boy makes his way through the rubble of the destroyed and deserted terminal of the Gaza strips former international airport in the southern city of Rafah on August 18, 2014. Egyptian-brokered indirect negotiations between Israel and the Palestinians are taking place during a five-day lull in the fighting that is due to expire at midnight (21:00 GMT). The Palestinians have rejected any call to disarm Gaza and are pushing for Israel to lift its eight-year blockade on the coastal territory and also want the establishment of a sea port and an airport. (Photo by Thomas Coex/AFP Photo) 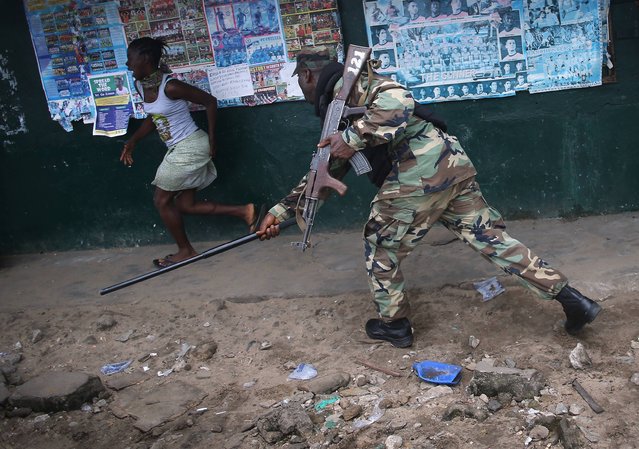 A Liberian Army soldier, part of the Ebola Task Force, beats a local resident while enforcing a quarantine on the West Point slum on August 20, 2014 in Monrovia, Liberia. The government ordered the quarantine of West Point, a congested seaside slum of 75,000, on Wednesday, in an effort to stop the spread of the virus in the capital city. Liberian soldiers were also sent in to the seaside favela to extract West Point Commissioner Miata Flowers and her family members after residents blamed the government for setting up a holding center for suspected Ebola patients to be set up in their community. A mob overran and closed the facility on August 16. The military also began enforcing a quarrantine on West Point, a congested slum of 75,000, fearing a spread of the epidemic. The Ebola virus has killed more than 1,200 people in four African nations, more in Liberia than any other country. (Photo by John Moore/Getty Images) 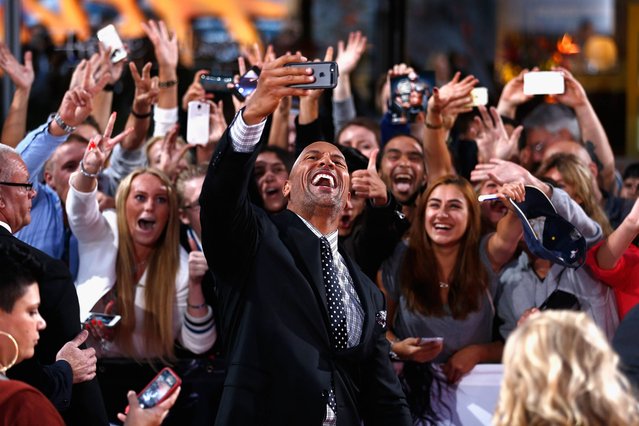 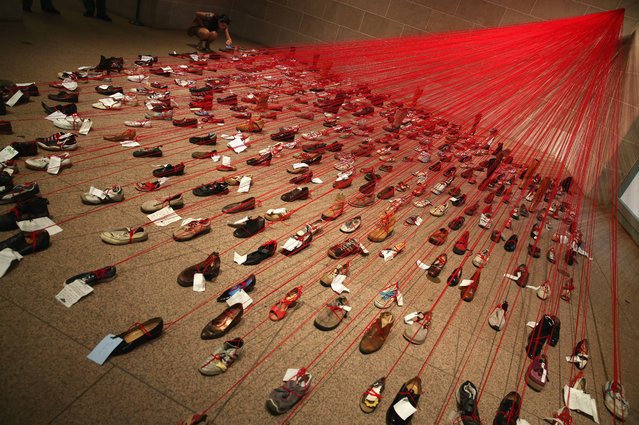 Visitors examine the art exhibit called “Perspectives” that is on display at the Smithsonian's Arthur M. Sackler Gallery, August 21, 2014 in Washington, DC. Perspectives transforms over 400 shoes attached to red yarn and handwritten notes into a dramatic and emotionally charged installation. (Photo by Mark Wilson/Getty Images) 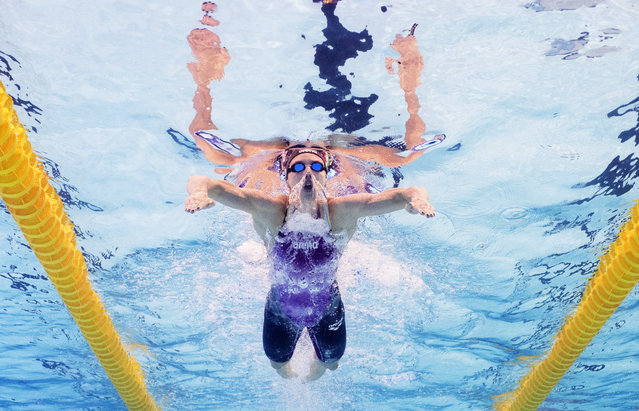 Katinka Hosszu of Hungary on her way to gold in the Women's 400m Medley heats at Europa-Sportpark on August 18, 2014 in Berlin, Germany. (Photo by Adam Pretty/Bongarts/Getty Images) 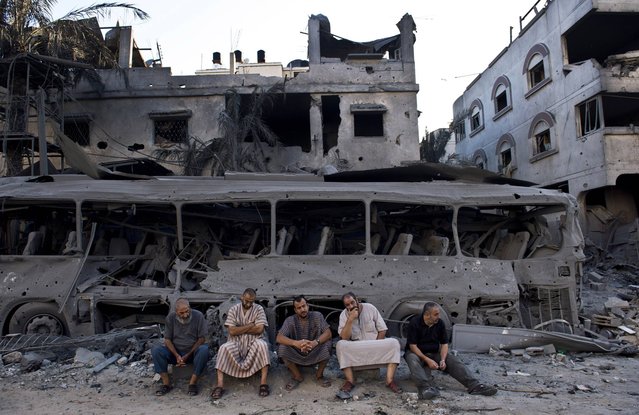 Five Palestinian men sit on August 20, 2014 next to a destroyed bus and houses in front of a house that was completely demolished after it was targeted by Israeli airstrikes late on August 19. Hamas said on August 20 that an Israeli air strike killed the wife and child of its Gaza military chief, as a temporary ceasefire went up in smoke and Cairo truce talks froze. (Photo by Roberto Schmidt/AFP Photo) 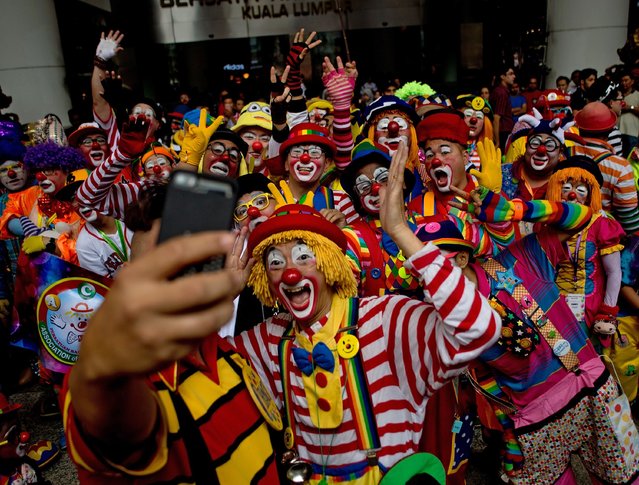 Clowns pose for a selfie after a parade during the Clown Festival in Kuala Lumpur on August 17, 2014. Around 80 clowns from all over Malaysia took part in the event organised by the Association of Clowns Malaysia to provide a platform for clown education, acquiring new skills and offering members support. (Photo by Manan Vatsyayana/AFP Photo) 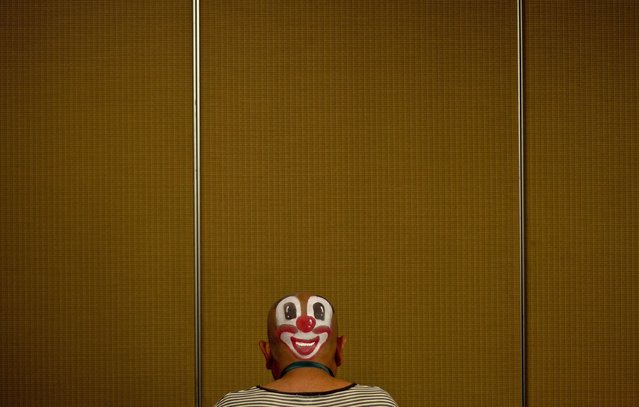 A clown prepares to take part in a Clown Festival in Kuala Lumpur on August 17, 2014. (Photo by Manan Vatsyayana/AFP Photo) 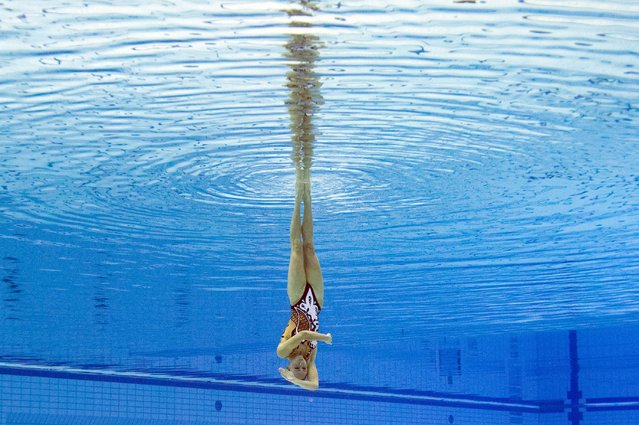 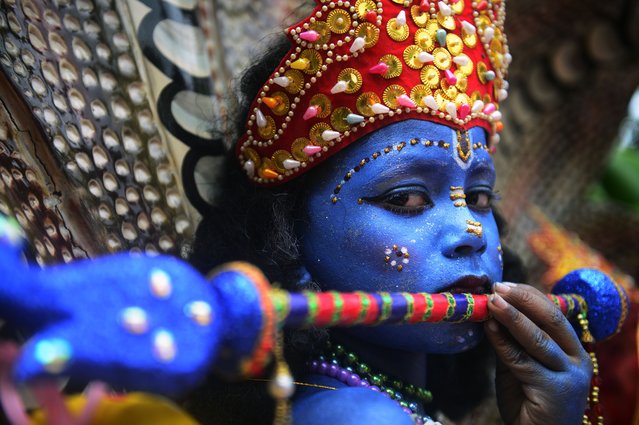 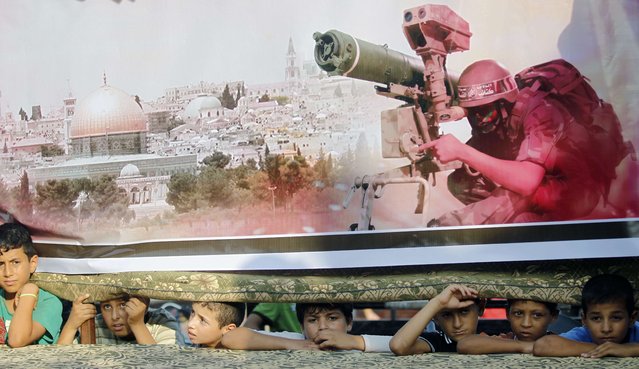 Palestinian boys look on from behind a stage where is displayed a giant poster showing a fighter during a demonstration of supporters of the Islamist Hamas movement in support of the Hamas delegates who are due to take part in the talks that resumed in Cairo on August 17, 2014 in Rafah in southern Gaza Strip. Egyptian-brokered indirect negotiations between Israel and the Palestinians are taking place during a five-day lull in the fighting which is due to expire at midnight (21:00 GMT) on August 18. (Photo by Said Khatib/AFP Photo) 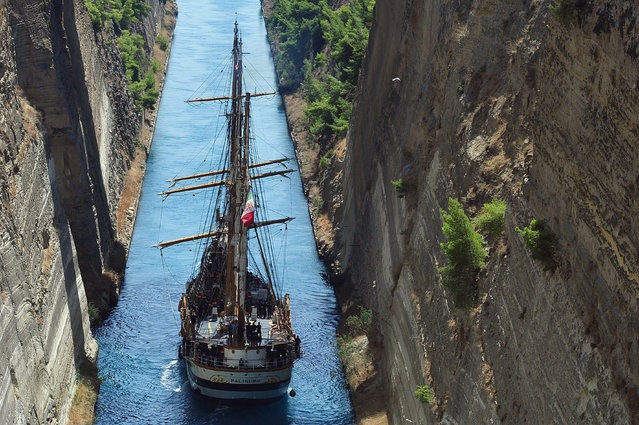 The Italian three-masted training vessel “Palinuro”, an iron-hulled barquentine, is crossing the Corinth Canal, Peloponnese, Greece, August 21, 2014. The Palinuro is active as sails trainings vessel for the Italian Navy. It was bought in 1951 by the Italian Navy as a replacement for the Cristoforo Colombo. The Palinuro is named after Palinurus the famous helmsman of Aeneas's ship. (Photo by Vasilis Psomas/EPA) 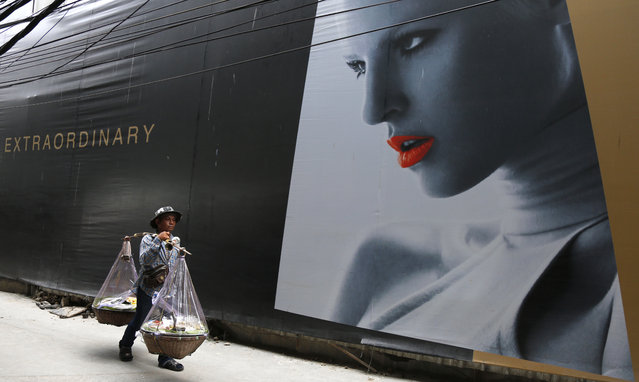 A Thai street food-seller walks the streets passing a high-end, luxury shopping center construction site boarded with advertisements of fashion models, in Bangkok, Thailand, August 21, 2014. As widely expected, the head of Thai military junta and army chief General Prayuth Chan-ocha was elected by the National Legislative Assembly to be the country's 29th prime minister by a unanimous vote August 21, as the Thai economy showed a return to upwards GDP growth, credited to the stability and reform plans introduced by the junta after the military took power in the May 22, 2014 coup. (Photo by Barbara Walton/EPA)
Edit Del
23 Aug 2014 11:44:00, post received 0 comments
Publication archive:
←   →
Popular tags:
All tags
Last searches: