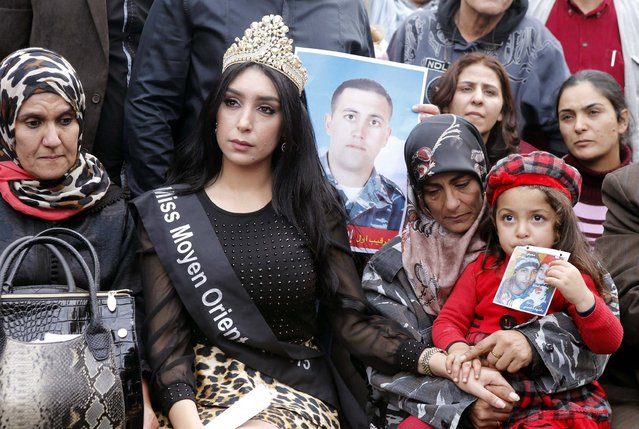 The mother and child (R) of Lebanese soldier Ali al-Bazzal, who was killed by Syria's al Qaeda offshoot Nusra Front, sit beside Miss Middle East (C) and other protesters as they demand the release of remaining soldiers, pressuring the government to act, in downtown Beirut December 14, 2014. (Photo by Mohammed Azakir/Reuters) 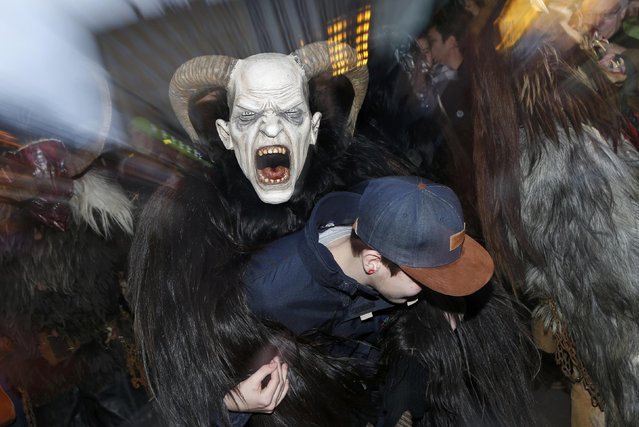 A man dressed as “Krampus” creature takes part in a parade at Munich's Christmas market, December 14, 2014. Young single men will wear the traditional attires known as “Krampus”, consisting of animal skins and masks, with large cow-bells to make loud and frightening noises and parade through the city. They follow 'Saint Nicholas' from house to house in December each year to bring luck to the good and punish the idle. (Photo by Michaela Rehle/Reuters) 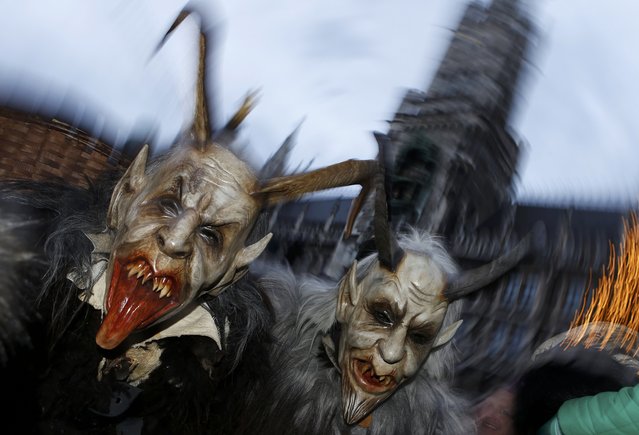 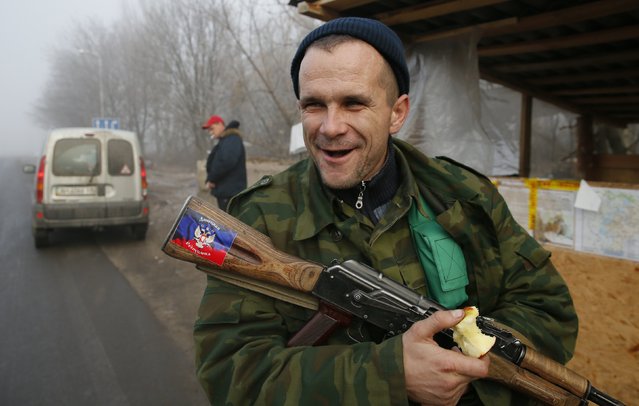 A pro-Russian rebel guards at the checkpoint outside of the town of Gorlovka northeast of Donetsk December 14, 2014. (Photo by Maxim Shemetov/Reuters) 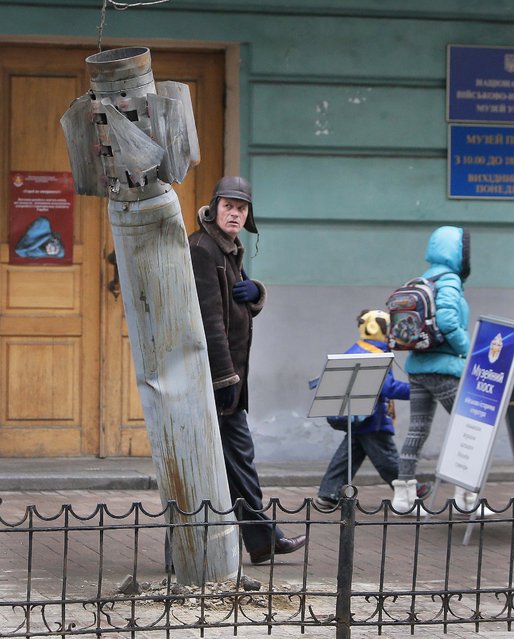 People pass by an unexploded missile shot by pro-Russian separatists in the country's east and brought to the Ukrainian capital as a symbol of the current conflict, in downtown Kiev, Ukraine, Tuesday, December 16, 2014. (Photo by Efrem Lukatsky/AP Photo) 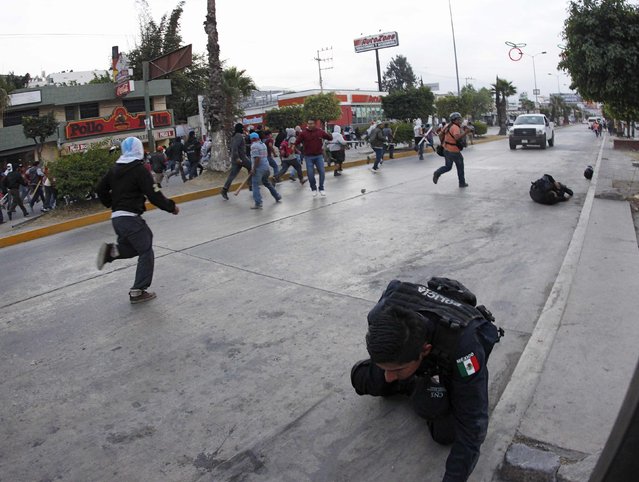 An injured federal police officer (bottom R) is seen as people chase after a car which reversed away after running over civilians, federal police officers, and journalists, during clashes in Chilpancingo, Guerrero, December 14, 2014. Five civilians and three federal police officers were injured during clashes early Sunday morning while Ayotzinapa Teacher Training College Raul Isidro Burgos students and CETEG, (State Coordinator of Teachers of Guerrero) members were preparing for a concert held at night in solidarity for the 43 missing trainee teachers from the college, according to local media. (Photo by Jorge Dan Lopez/Reuters) Palestinian members of al-Qassam Brigades, the armed wing of the Hamas movement, rappel from a building upside down during a military parade marking the 27th anniversary of Hamas' founding, in Gaza City December 14, 2014. (Photo by Suhaib Salem/Reuters) 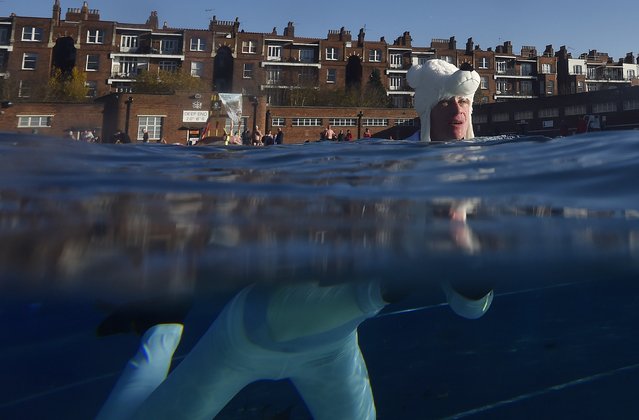 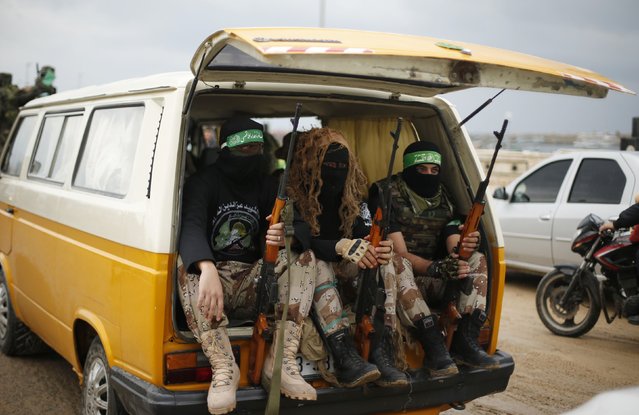 Palestinian members of al-Qassam Brigades, the armed wing of the Hamas movement, sit in a vehicle as they take part in a military parade marking the 27th anniversary of Hamas' founding, in Gaza City December 14, 2014. (Photo by Suhaib Salem/Reuters) 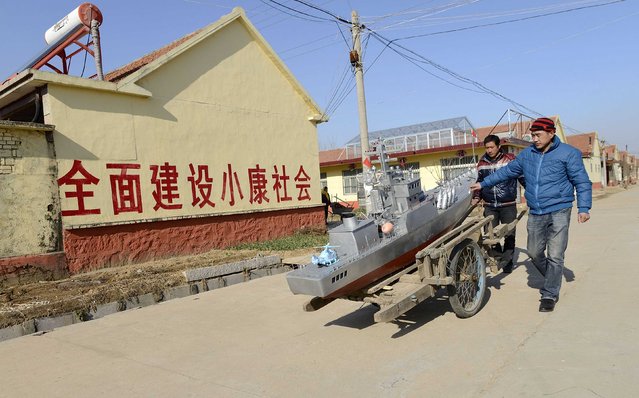 Residents push a cart to transport a homemade replica of a destroyer vessel made by retired fishboat captain Guo Changhai (not pictured), as they walk along a road after a test run in Xiaojia village of Rizhao, Shandong province, December 13, 2014. Guo, 56-year-old, who sold his fishboat in 2005 after being the captain for 27 years, started making vessel models out of recycled waste such as wooden planks, cans, steel wires and pipes. The 2.6-metre-long model of a destroyer, which can be remote controlled and be able to shoot gunpowder, took him over six months to finish, local media reported. (Photo by Reuters/China Daily) 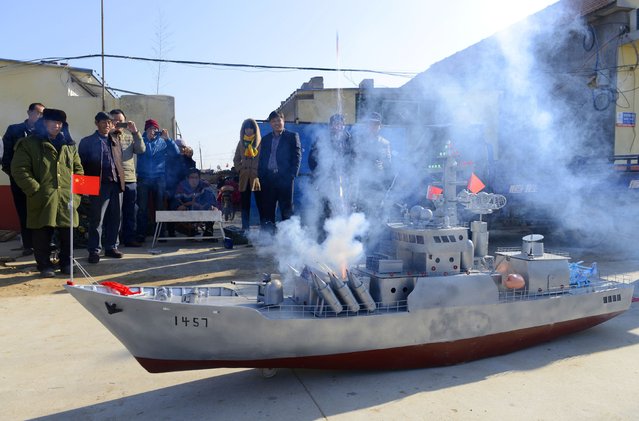 Residents look on as a mocked missile, made of gunpowder, fires from a homemade replica of a destroyer vessel made by retired fishboat captain Guo Changhai, during a test run in Xiaojia village of Rizhao, Shandong province, December 13, 2014. (Photo by Reuters/China Daily) 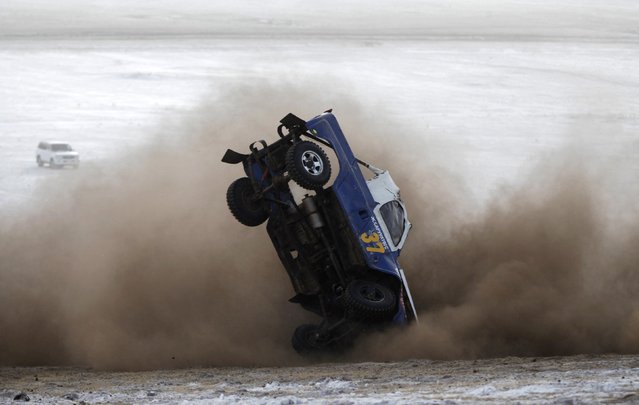 A car overturns during the Master Cross Race 2014 at Suuj Uul, outside Ulan Bator, December 14, 2014. (Photo by B. Rentsendorj/Reuters) 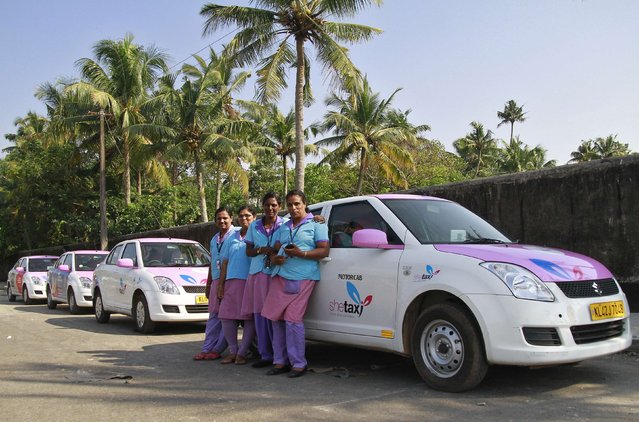 Female drivers from the “She Taxi” service pose next to a taxi on a road in the southern Indian city of Kochi, December 12, 2014. The alleged rape of a woman passenger by an Uber taxi driver once again spotlights the risks of India's transport system, which fails to keep women safe. One solution: Taxis driven by women for women. Last year, the southern state of Kerala launched “She Taxis”, a fleet of 40 pink taxis run by women, and fitted with wireless tracking gear and panic buttons linked to call centers. (Photo by Sivaram V./Reuters) 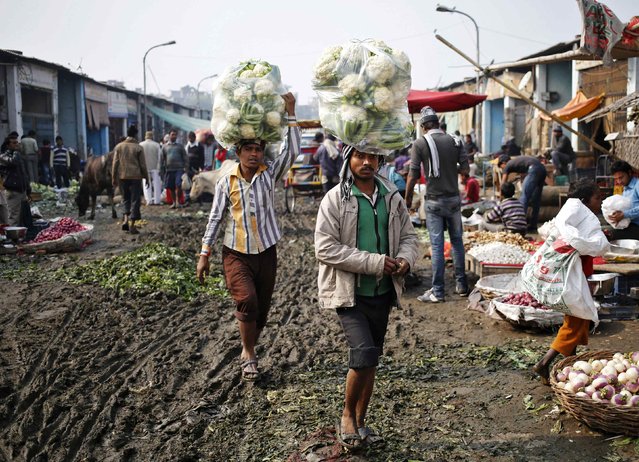 Vendors carry cauliflower for sale at a vegetable wholesale market in New Delhi December 15, 2014. India's wholesale price inflation eased for a sixth straight month in November to its lowest in nearly 5-1/2 years, mainly driven by a sharp fall in fuel prices, government data showed on Monday. (Photo by Anindito Mukherjee/Reuters) 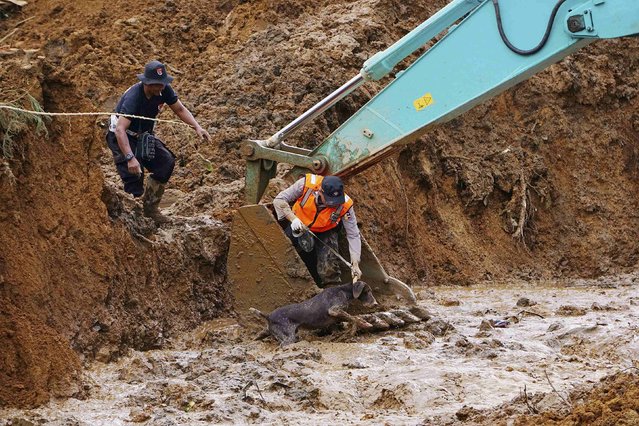 A policeman, with a rescue dog, stands in an excavator as they search for landslides victims at Sampang village in Banjarnegara, December 15, 2014, in this photo taken by Antara Foto. The landslide destroyed a village and killed at least 32 people, officials said, with scores still missing. (Photo by Idhad Zakaria/Reuters/Antara Foto) 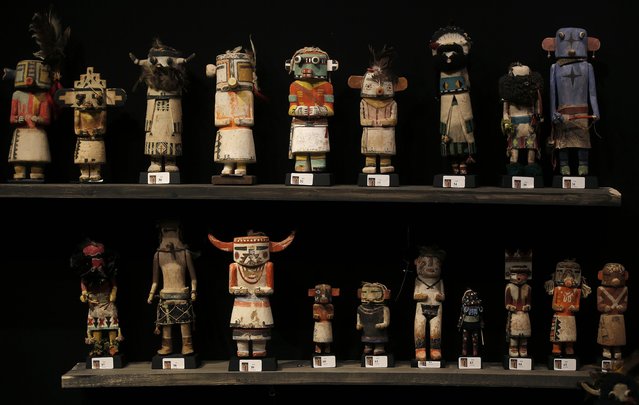 Kachina dolls made by the Native American Hopi and Zuni tribes are displayed at the Drouot auction house in Paris before auction, December 15, 2014. The Hopi, some of whose 18,000 members continue to follow a traditional way of life farming on three isolated mesas, believe the bright, mostly fabric masks are imbued with the spirits of divine messengers. (Photo by Christian Hartmann/Reuters) 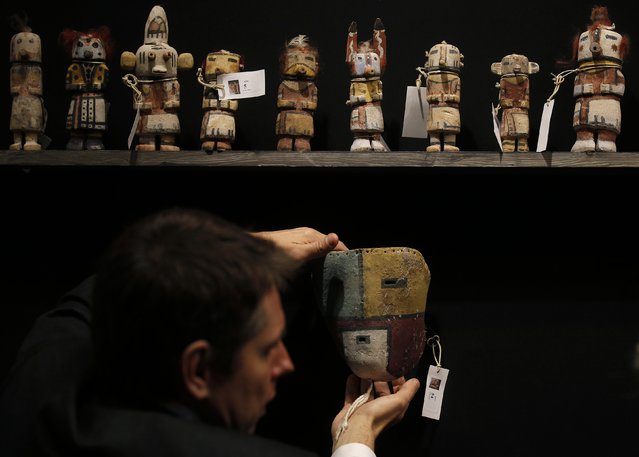 An expert hangs a rare antique Tuma Uyim mask below Kachina dolls made by the Native American Hopi and Zuni tribes displayed at the Drouot auction house in Paris before auction, December 15, 2014. (Photo by Christian Hartmann/Reuters) A resin sculpture, called “All Together Now”, by artist Andrew Edward's is seen after being unveiled in the remains of St Luke's Church in Liverpool, northern England December 15 , 2014. The sculpture, depicting the Christmas Day football match between German and British soldiers fighting on the front line in World War One in 1914, will be displayed in the church that was damaged during German bombing of Liverpool in 1941. It will be displayed in the Liverpool church for a week, before being taken to be displayed at the area near Flanders where the football match took place. The longer term plan is for a permanent sculpture to be cast in bronze from the resin-finished version. (Photo by Phil Noble/Reuters) 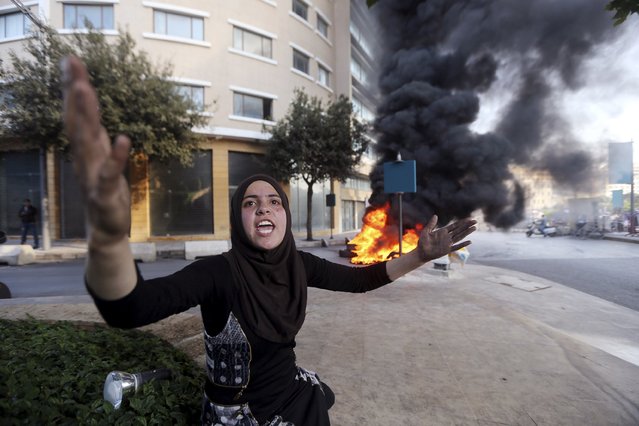 Wadha al-Sayyed, wife of captive Lebanese soldier Khaled Moqbel, protests for his release and government action, near burning tyres blocking a road in Beirut, December 15, 2014. More than two dozen members of the Lebanese security forces are being held by Sunni Islamists. (Photo by Hasan Shaaban/Reuters) 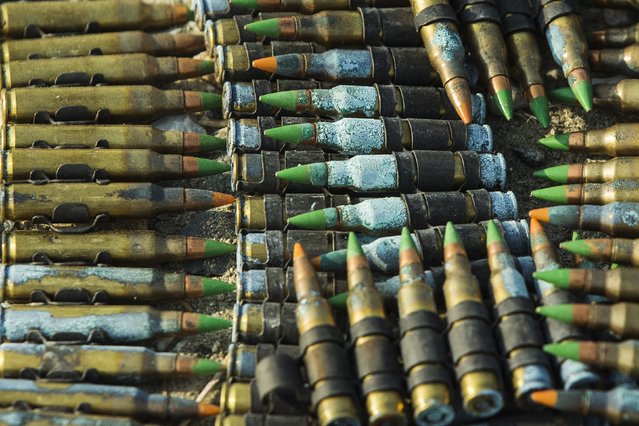 Corroded rounds of machine gun ammunition sit in a pile after being discarded by U.S. soldiers from the 3rd Cavalry Regiment, during a training mission near forward operating base Gamberi, in the Laghman province of Afghanistan, December 15, 2014. (Photo by Lucas Jackson/Reuters) 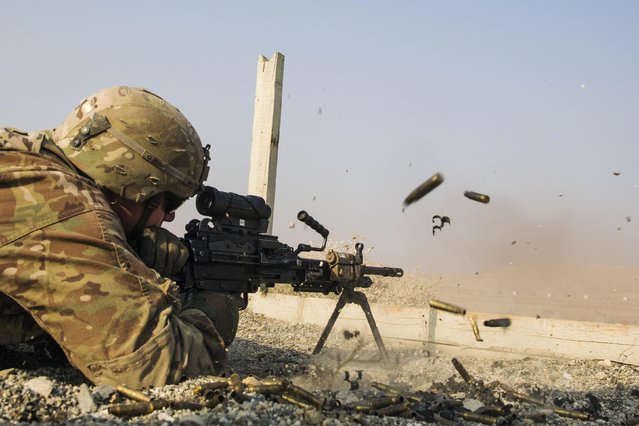 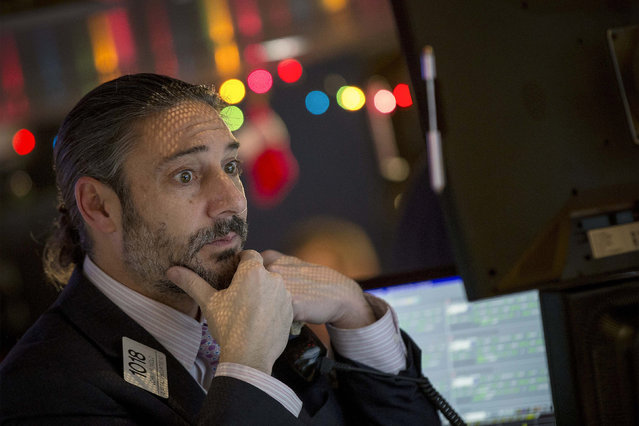 A trader works on the floor of the New York Stock Exchange December 15, 2014. (Photo by Brendan McDermid/Reuters) 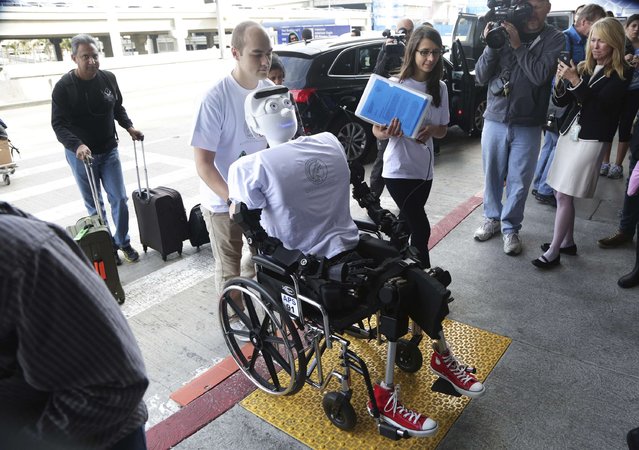 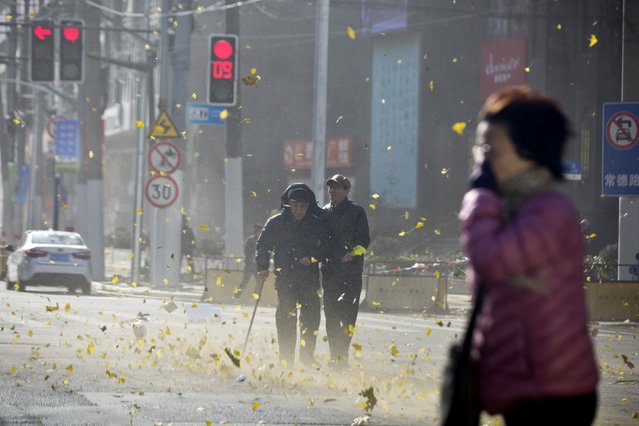 People walk along a street on a windy day in central Shanghai, December 16, 2014. (Photo by Aly Song/Reuters) 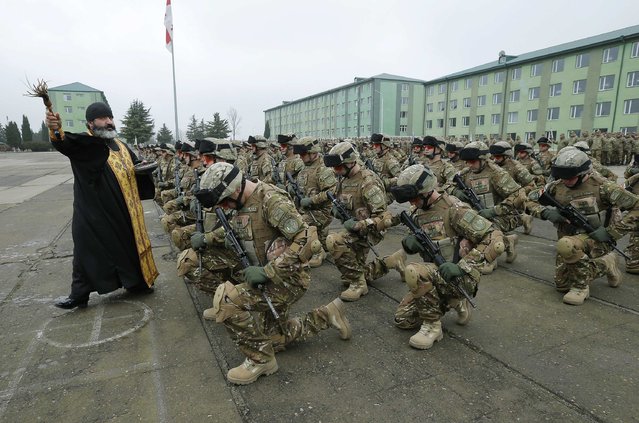 A priest blesses servicemen during a farewell ceremony at the Vaziani military base outside Tbilisi, December 16, 2014. According to Georgia's Defence Ministry, a joint company from the IV mechanized brigade of the Georgian Armed Forces is departing to Afghanistan to take over from another Georgian unit, as part of the International Security Assistance Force (ISAF), NATO military operation. (Photo by David Mdzinarishvili/Reuters) 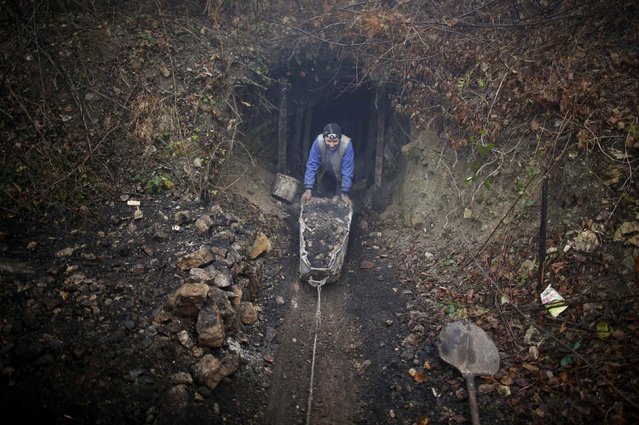 A miner pushes a bathtub loaded with coal out of an illegal coal mine near the Bosnian town of Vitez December 15, 2014. For the past four years, war veteran Ramiz Rizvic with his son and some family members, have been extracting coal from this illegal and unsafe mine using primitive and makeshift tools. Each of the workers earns the equivalent of $12 for a 12 hour shift at 200 meters (655 ft) deep. They sell each 50 kg (110 lb) sack of their coal for about 4$. High unemployment levels in the former Yugoslavian republic has helped the proliferation of this kind of illegal mining. (Photo by Dado Ruvic/Reuters) 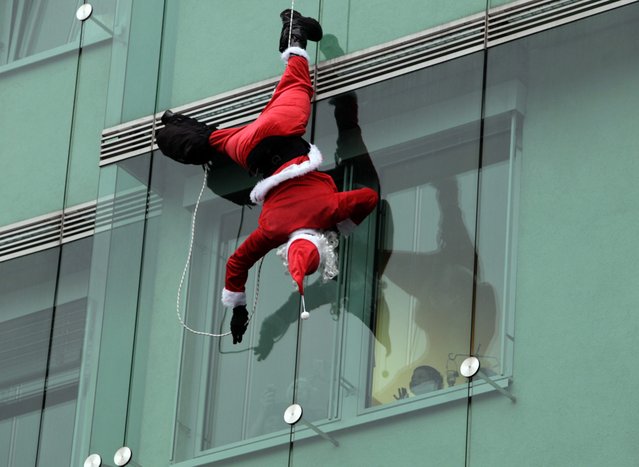 A member of the police special forces dressed in a Santa Claus suit waves to a patient as he abseils from the roof of a paediatric clinic in Ljubljana December 16, 2014. (Photo by Srdjan Zivulovic/Reuters) 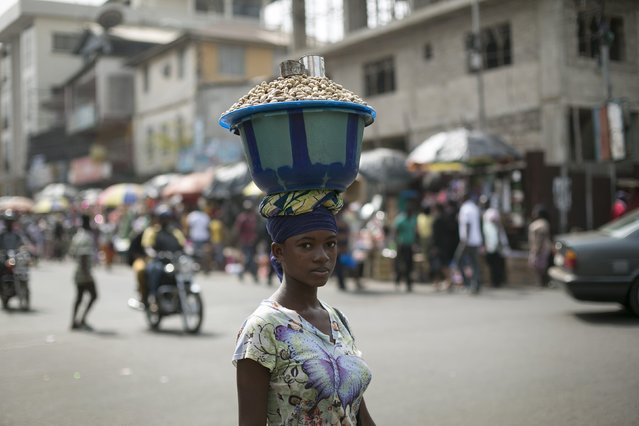 A Sierra Leonen woman carries a pot of peanuts on her head in Freetown, Sierra Leone, December 16, 2014. (Photo by Baz Ratner/Reuters) 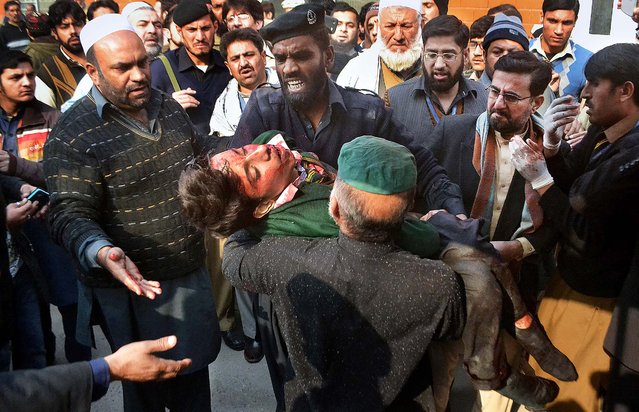 Hospital security guards carry a students injured in the shootout at a school under attacked by Taliban gunmen in Peshawar, Pakistan,Tuesday, December 16, 2014. Taliban gunmen stormed a military school in the northwestern Pakistani city, killing and wounding dozens, officials said, in the latest militant violence to hit the already troubled region. (Photo by Mohammad Sajjad/AP Photo) 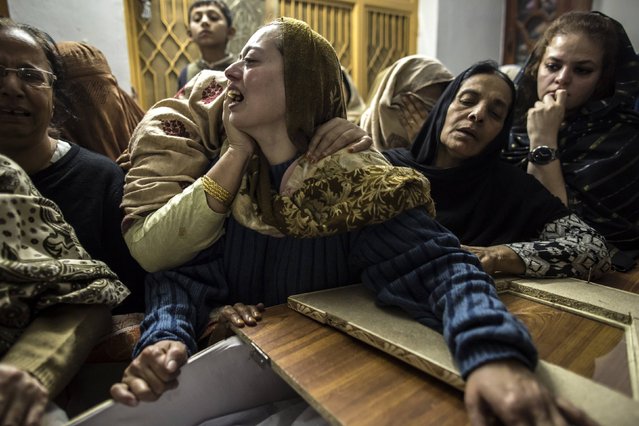 A mother mourns her son Mohammed Ali Khan, 15, a student who was killed during an attack by Taliban gunmen on the Army Public School, at her house in Peshawar December 16, 2014. Taliban gunmen in Pakistan took hundreds of students and teachers hostage on Tuesday in a school in the northwestern city of Peshawar, military officials said. (Photo by Zohra Bensemra/Reuters)
Edit Del
20 Dec 2014 11:31:00, post received 0 comments
Publication archive:
←   →
Popular tags:
All tags
Last searches: