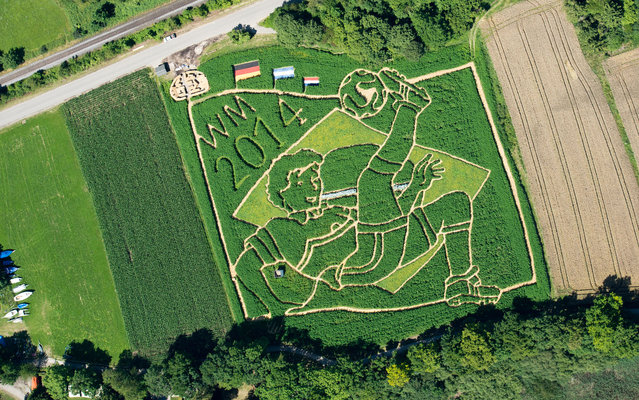 An aerial view taken on July 15, 2014 shows a field in football-design in Uttig, southern Germany. A labyrinth carved in the field shows a footballer making a bicycle kick on the flag of the 2014 Football World Cup host country Brazil as well as the flags of the winning nations (top, L-R) Germany (1st), Argentina (2nd) and The Netherlands (3rd). The field was created by farmers Uli and Corinne Ernst and their team since the sowing in April 2014 and consists of hemp, corn, rapeseed, sunflowers and common mallow. The giant greeting card to celebrate Germany's FIFA World Cup title measures 18,000 square meters, has an approximately three kilometers long labyrinth and is open for visitors from July 17 to September 28, 2014. (Photo by Peter Kneffel/AFP Photo/DPA) 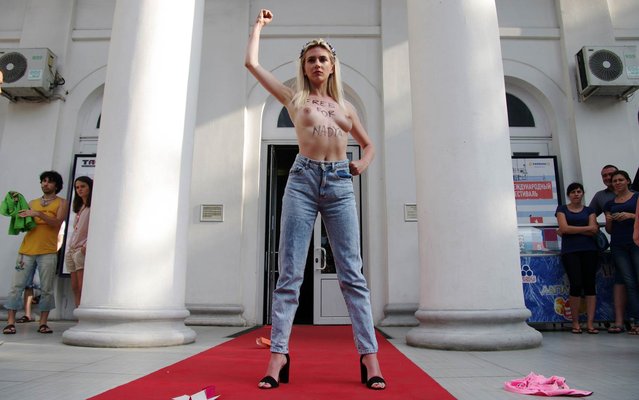 A topless FEMEN activist bearing the inscription “Free for Nadya” raises her fist as she shouts slogans during a demonstration in the southern Ukrainian city of Odessa on July 14, 2014, to demand to free Ukrainian military pilot Nadya Savtchenko (unseen). Savtchenko was captured on July 9 by pro-Russian militants in the east of the country and sent to Russia. (Photo by Alexey Kravtsov/AFP Photo) 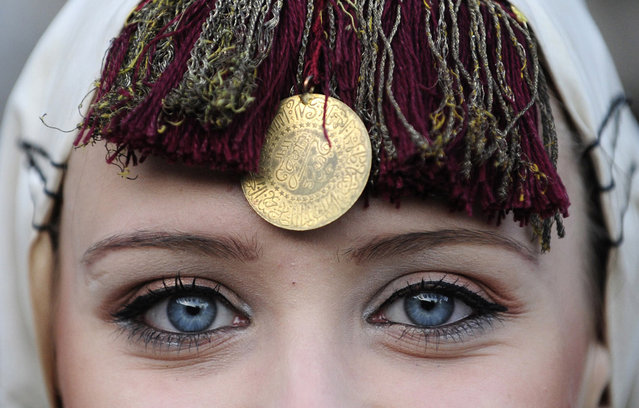 Women dressed in folk costumes take part in a traditional wedding ceremony in the village of Galicnik, west of Macedonia's capital Skopje, July 12, 2014. The Galicnik Wedding, a three-day traditional Macedonian wedding celebration held each “Petrovden” or St. Peter's Day, involves traditional customs, costumes, and rituals and dances that have been passed down over the centuries. (Photo by Ognen Teofilovski/Reuters) 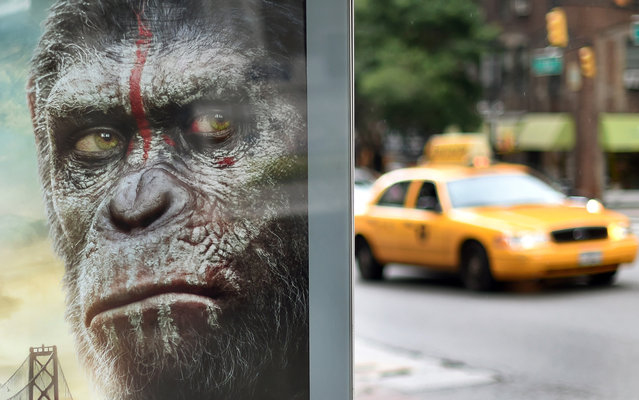 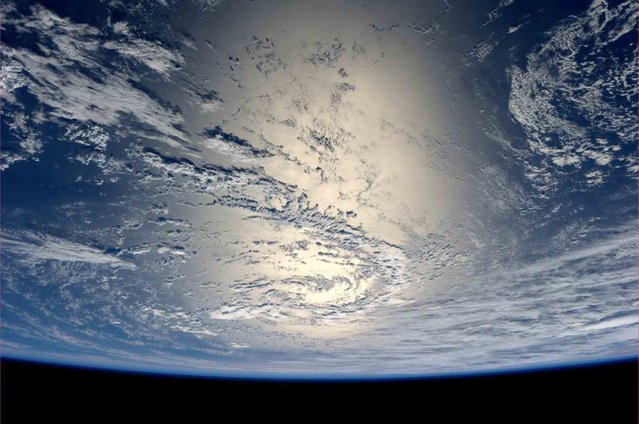 The sun reflects off the water in this picture taken by German astronaut Alexander Gerst from the International Space Station and sent on his Twitter feed July 17, 2014. (Photo by Alexander Gerst/Reuters/NASA) 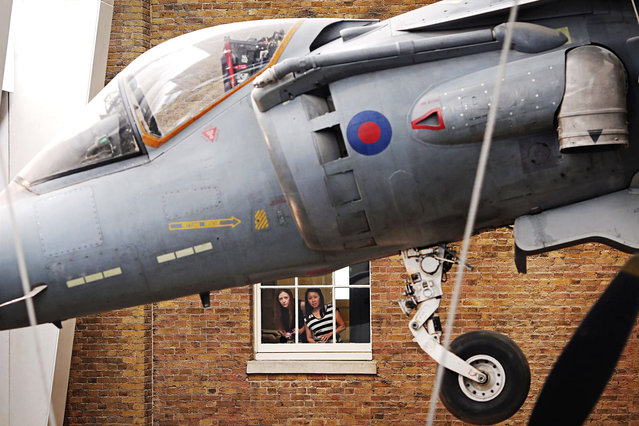 Imperial War Museum employees look out of a window into the main atrium on July 15, 2014 in London, England. (Photo by Dan Kitwood/Getty Images) 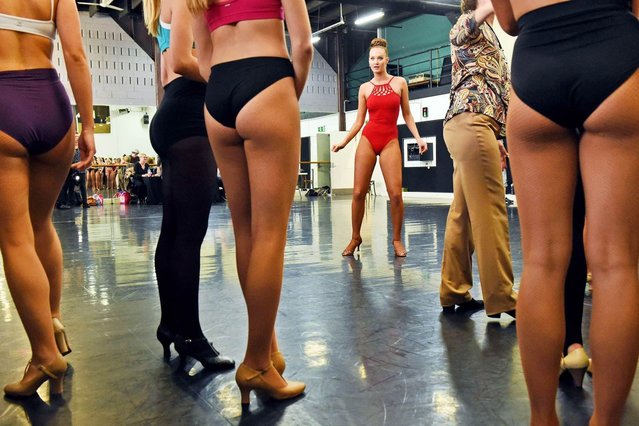 Dancers audition for the famous Moulin Rouge in Paris which celebrates its 125th birthday this year, in Sydney on July 15, 2014. The dancers are auditioning for a place in the show which consists of a troupe of 60 artists who perform twice on stage every evening, 365 days a year, with 1000 made to measure costumes, a giant aquarium, five pythons and six miniature horses. (Photo by William West/AFP Photo) 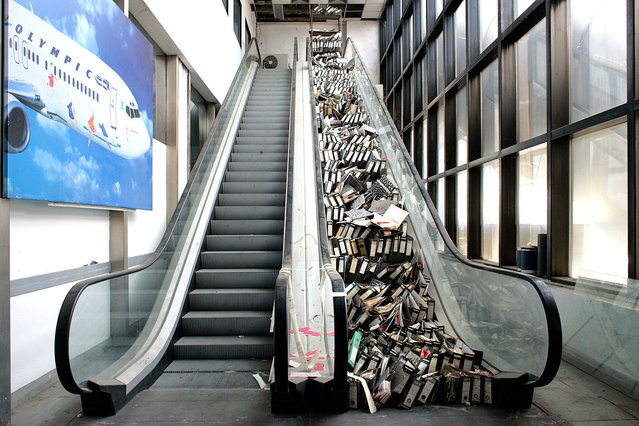 An internal view of the now abandoned Hellenikon airport on July 15th, 2014 in Athens. Hellenikon airport was built in 1938 and was Athens first and main airport serving over 12 million passengers a year. It closed in 2001 and has remained empty ever since. According to reports there are now plans to re develop the site to include hotels, shops and a marina. (Photo by Milos Bicanski/Getty Images) 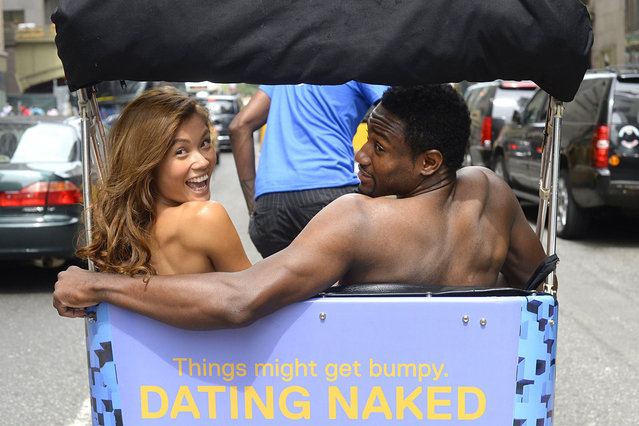 Kelly Keodara and Yarc Lewinson ride around Grand Central Station in New York on July 16, 2014 in a pedicab to promote a new VH1 series to the roster called “Dating Naked”, which is built on the premise of stripping away the outer trappings of attraction by dating naked. The series,is filmed on a remote exotic locale, and each closed-ended episode will feature a man and a woman as they each date two different, naked suitors. “Dating Naked” will feature ten 1-hour close-ended episodes in its first season on VH1, and will premiere on July 17. (Photo by Timothy A. Clary/AFP Photo) 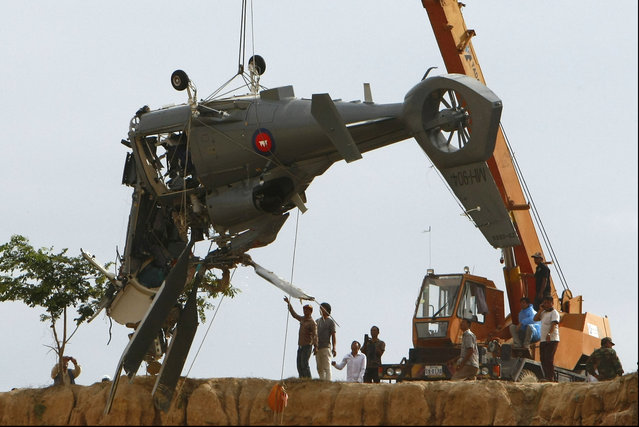 Soldiers use a crane to lift an aft section of a helicopter retrieved from a pond following its crash in Prey Sar village at the outskirt of Phnom Penh, Cambodia, Monday, July 14, 2014. The chopper went down about 10 kilometers (6 miles) south of Phnom Penh on Monday, sinking in a muddy pond surrounded by rural land and rice fields. (Photo by Heng Sinith/AP Photo) 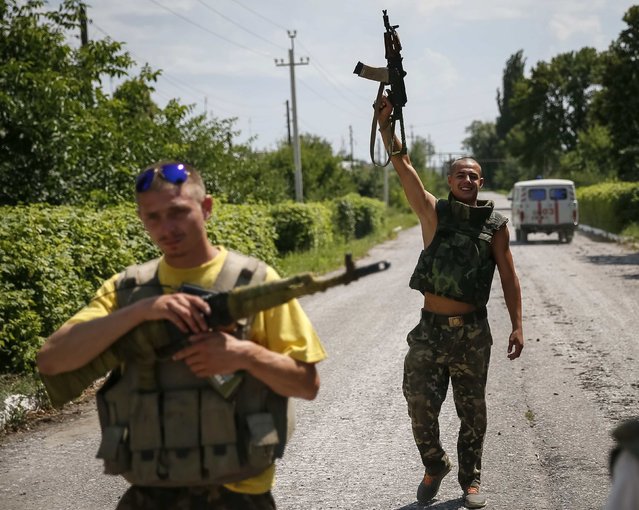 Ukrainian soldiers stand guard in the eastern Ukrainian town of Seversk July 12, 2014. Ukrainian war planes bombarded separatists along a broad front on Saturday, inflicting huge losses, Kiev said, after President Petro Poroshenko said “scores and hundreds” would be made to pay for a deadly missile attack on Ukrainian forces. (Photo by Gleb Garanich/Reuters) 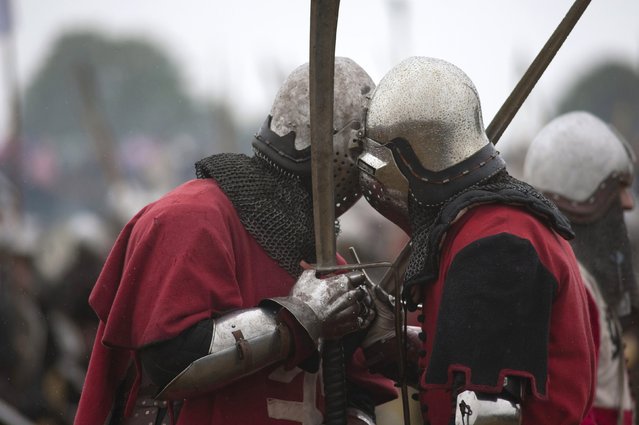 People dressed as knights take part in a reenactment of The Battle of Grunwald, in Grunwald July 12, 2014. The battle is thought of as the most important victory in Poland's history and was one of the biggest battles in Medieval Europe. 1300 history enthusiasts took part in the reenactment, which was watched by 15,000 spectators, using self-made weapons and costumes. (Photo by Filip Klimaszewski/Reuters) 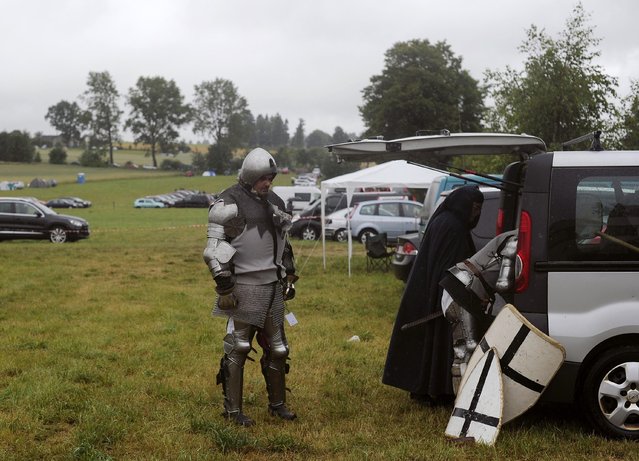 Men dressed as knights of the Teutonic Order prepare to participate in a reenactment of The Battle of Grunwald, in Grunwald July 12, 2014. (Photo by Filip Klimaszewski/Reuters) 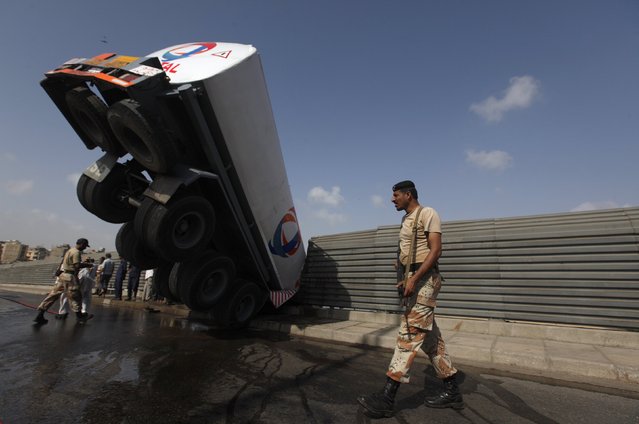 A Ranger soldier (R) walks past an oil tanker, after it skidded and crashed on the side grill of a bridge, in Karachi July 12, 2014. A tanker carrying 8000 liters of diesel, skidded and crashed due to speeding, according to local media. There were no reports of any casualties. (Photo by Akhtar Soomro/Reuters) 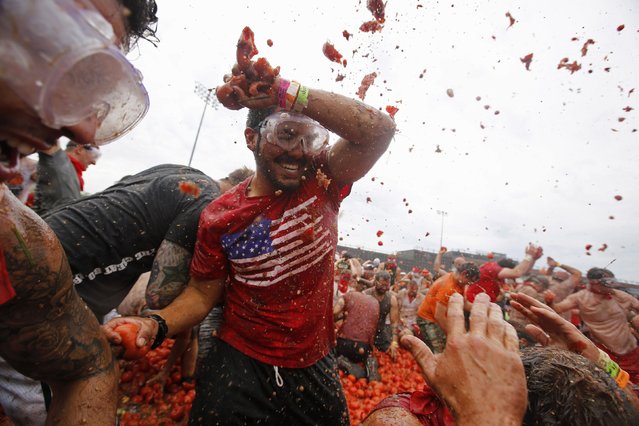 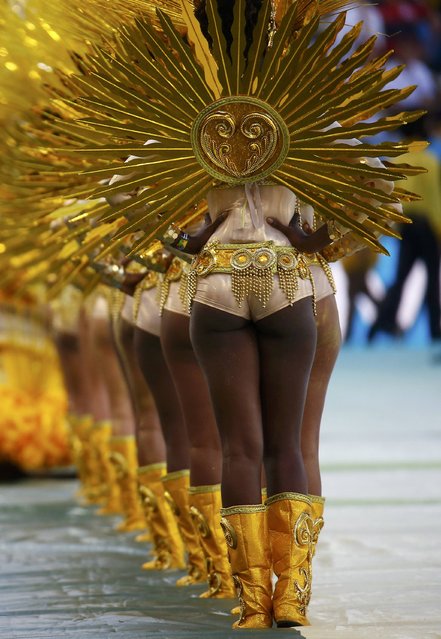 A pro-Russian separatist stands guard nearby a rally in support of Novorossiya (New Russia) on Lenin Square in the center of the eastern Ukrainian city of Donetsk, on Jule 13, 2014. (Photo by Maxim Zmeyev/Reuters) 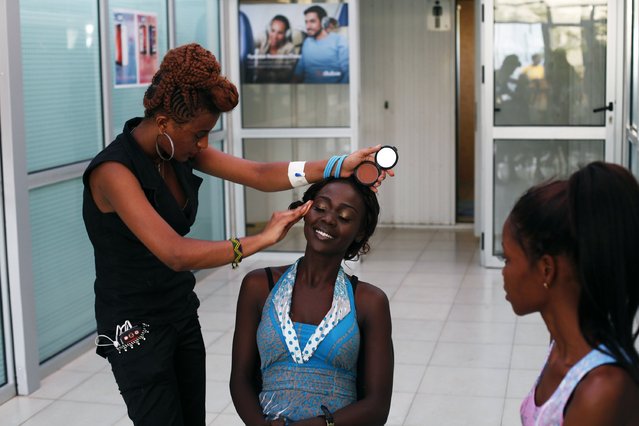 A contestant has makeup applied before the “Beauties of South Sudan” beauty contest in Juba, South Sudan, on Jule 13, 2014. (Photo by Andreea Campeanu/Reuters) 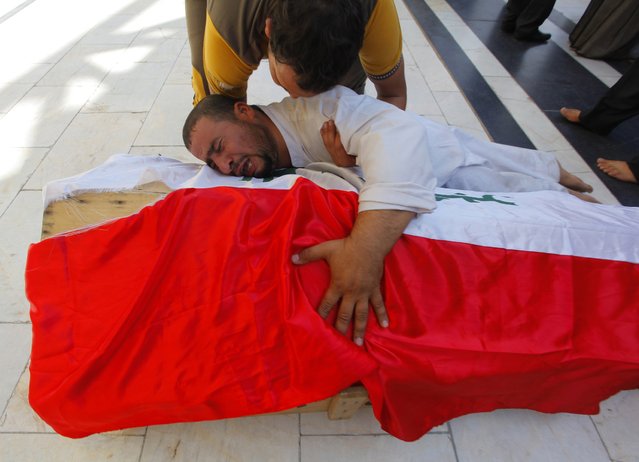 A man mourns on the coffin of Salah al-Wa'ili, a fighter from the Iraqi Shi'ite group Asa'ib Ahl al-Haq, during his funeral in Najaf July 12, 2014. Responding to an appeal from Shi'ite clerics, Wa'ili signed up earlier this month with the militia near Baghdad fighting the Islamist insurgents who have swept through northern Iraq and threatened the capital. A week later the 27-year-old part-time fighter was dead. Killed in battle against Sunni militants near the western city of Ramadi on Friday, he joined the growing list of casualties from the latest wave of conflict to strike Iraq, which has been plagued by war, sanctions and sectarian strife for longer than Wa'ili's brief lifetime. Picture taken July 12, 2014. (Photo by Alaa Al-Marjani/Reuters) 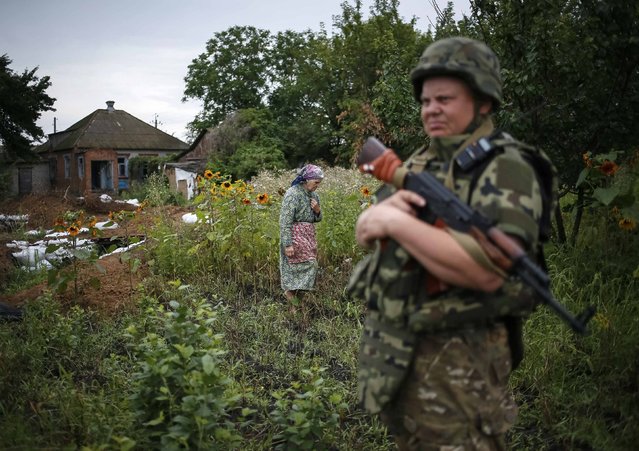 A member of the Ukrainian police special task force “Kiev-1” patrols in the eastern Ukrainian village of Semenovka near Sloviansk, July 14, 2014. Ukraine on Monday accused Russian army officers of fighting alongside separatists in the east of the country and said Moscow was once more building up its troops on the joint border. (Photo by Gleb Garanich/Reuters) 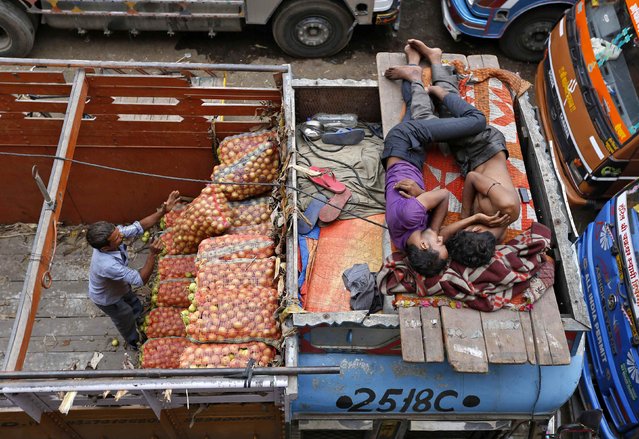 A worker unloads sacks of vegetables as men sleep on top of a truck at a wholesale vegetable market in the western Indian city of Ahmedabad July 14, 2014. India's wholesale price inflation in June eased to a four-month low of 5.43 percent, helped by slower increases in food and fuel costs, government data showed on Monday. (Photo by Amit Dave/Reuters) 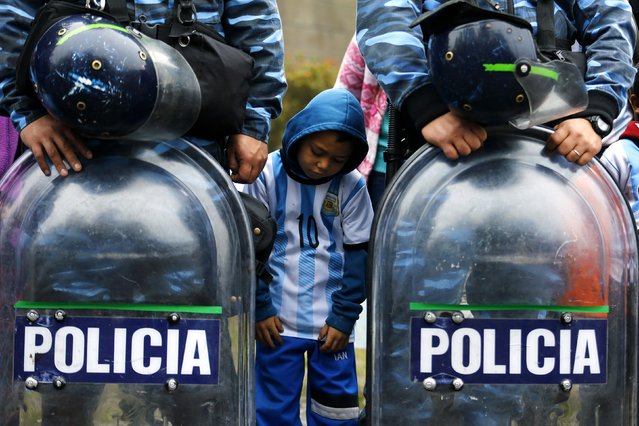 An Argentine fan stands between policemen as they gather to welcome their team outside the Argentine Football Association (AFA) after Argentina lost to Germany in their 2014 World Cup final soccer match, in Buenos Aires, July 14, 2014. (Photo by Ivan Alvarado/Reuters) 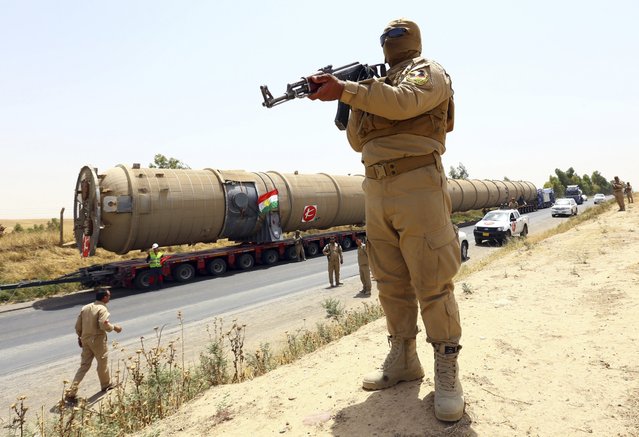 A member of the Kurdish security forces takes up position with his weapon as he guards a section of an oil refinery, which is being brought on a truck to Kalak refinery in the outskirts of Arbil, in Iraq's Kurdistan region, July 14, 2014. (Photo by Reuters/Stringer)
Edit Del
19 Jul 2014 10:11:00, post received 0 comments
Publication archive:
←   →
Popular tags:
All tags
Last searches: