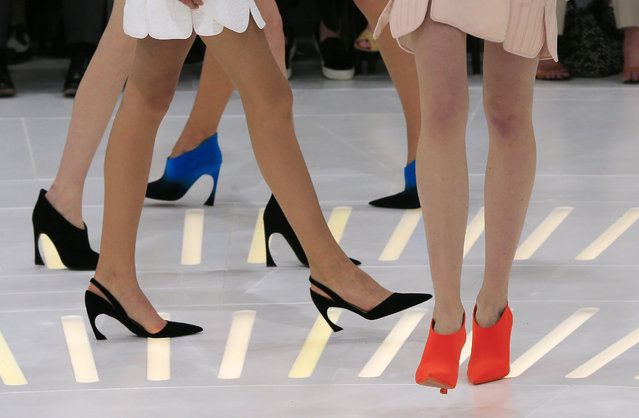 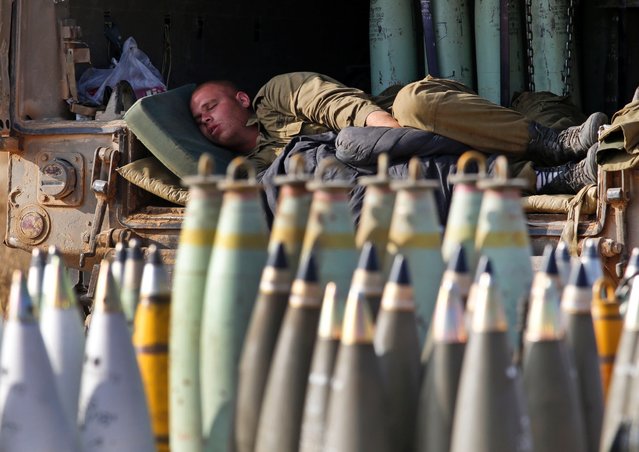 An Israeli soldier sleeps on a truck behind mobile artillery unit shells at a position on the Israel-Gaza border, July 11, 2014. Gaza rocket fire struck a gas station and set it ablaze in southern Israel, seriously wounding one person in the four-day-long offensive. (Photo by Lefteris Pitarakis/AP Photo) 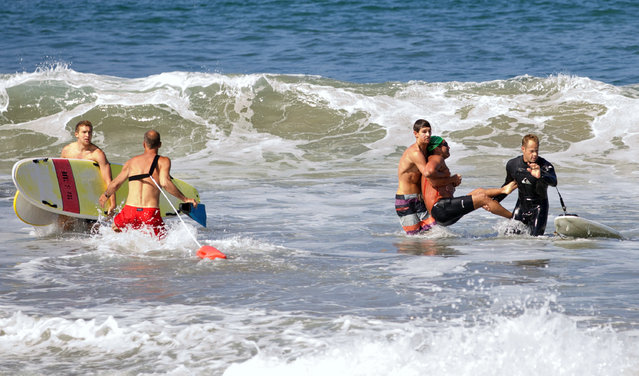 Two men carry a swimmer, second from right, after he was bitten by a great white shark, as lifeguards close in at left in the ocean off Southern California's Manhattan Beach, Saturday, July 5, 2014. The man, who was with a group of long-distance swimmers when he swam into a fishing line, was bitten on a side of his rib cage according to Rick Flores, a Los Angeles County Fire Department spokesman. The man's injuries were not life-threatening and he was taken to a hospital conscious and breathing on his own, Flores said. (Photo by Laura Joyce/AP Photo) 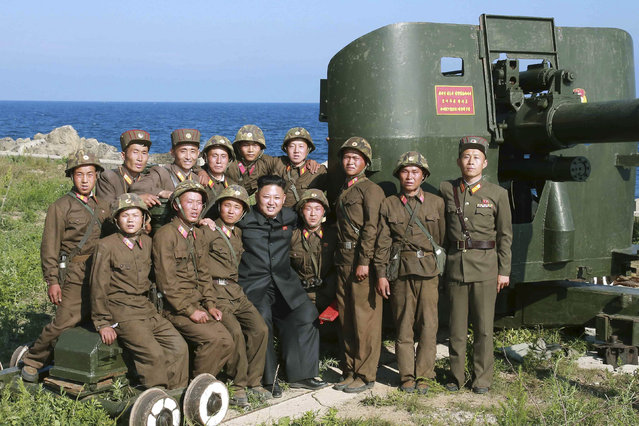 North Korean leader Kim Jong Un poses with soldiers during an inspection of the defence detachment on Ung Islet, which is defending an outpost in the East Sea of Korea, in this undated photo released by North Korea's Korean Central News Agency (KCNA) in Pyongyang July 7, 2014. (Photo by Reuters/KCNA) 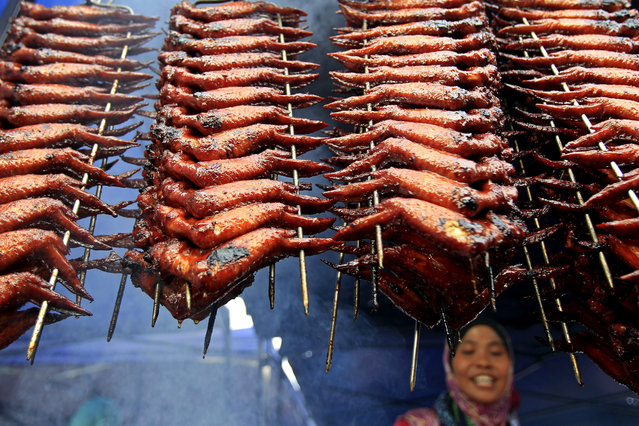 A vendor prepares grilled chicken wings for sale at a Ramadan bazaar in Shah Alam, outside Kuala Lumpur, Malaysia, Saturday, July 5, 2014. Dozens of Ramadan bazaars have sprouted up in the city to sell food for fasting Muslims during this holy month of Ramadan. (Photo by Lai Seng Sin/AP Photo) 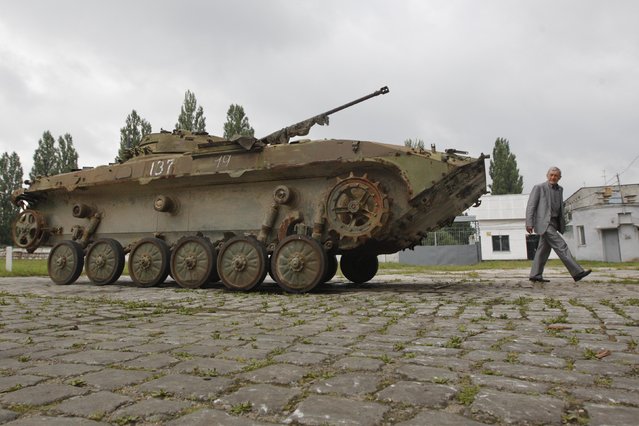 A man walks past an armoured personnel carrier ready for reconditioning at the 141th Zhytomyr Armor Mechanical Repair Plant in Zhytomyr July 10, 2014. Ukrainian forces regained more ground but sustained further casualties on Thursday in clashes with separatists, while two Western allies urged Russia's Vladimir Putin to exert more pressure on the rebels to find a negotiated end to the conflict. (Photo by Valentyn Ogirenko/Reuters) 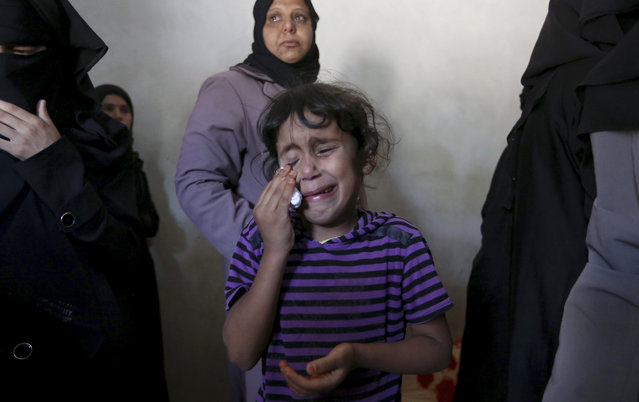 Asma weeps at the funeral of her brother, Gomha Abu Shalouf, 27, a member of the Ezz Al-Din Al Qassam Brigades, the military wing of Hamas, who was killed in an airstrike in Rafah, southern Gaza Strip on Monday, July 7, 2014. The Islamic militant group Hamas that rules Gaza vowed revenge on Israel for the death of several of its members killed in an airstrike early Monday morning in the deadliest exchange of fire since the latest round of attacks began weeks ago. (Photo by Hatem Moussa/AP Photo) 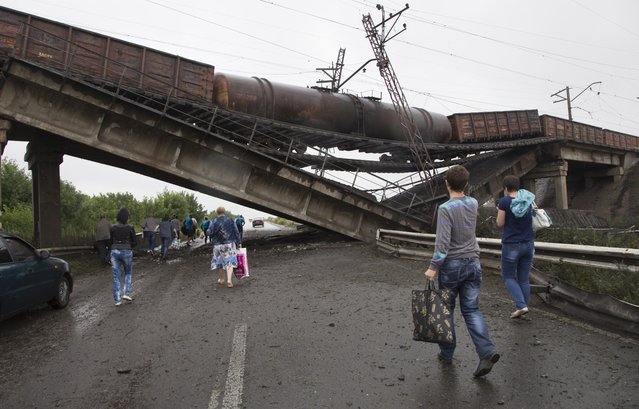 People walk under a destroyed railroad bridge over a main road leading into the east Ukraine city of Donetsk, near the village of Novobakhmutivka, 20 km North from the city of Donetsk, eastern Ukraine Monday, July 7, 2014. The bridge has been destroyed, blocking a key access route to the rebel-held city. (Photo by Dmitry Lovetsky/AP Photo) 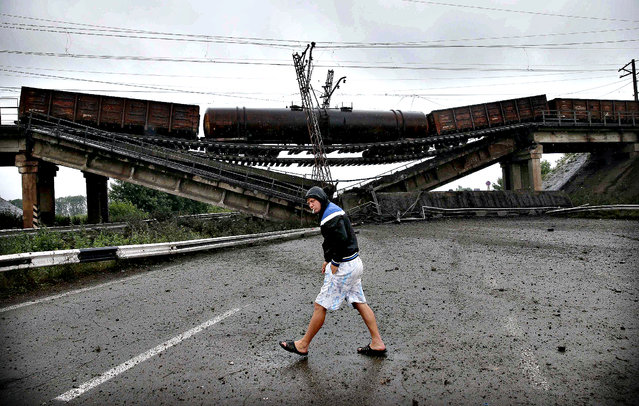 A man walks past a destroyed railroad bridge which fell over a main road leading to the eastern Ukrainian city of Donetsk, near the village of Novobakhmutivka, north of Donetsk July 7, 2014. Ukraine's richest man pleaded with the government on Monday not to bomb Donetsk, a city of a million people where hundreds of heavily armed pro-Russian rebels have vowed to make a stand after losing control of their bastion in the town of Slaviansk. (Photo by Maxim Zmeyev/Reuters) 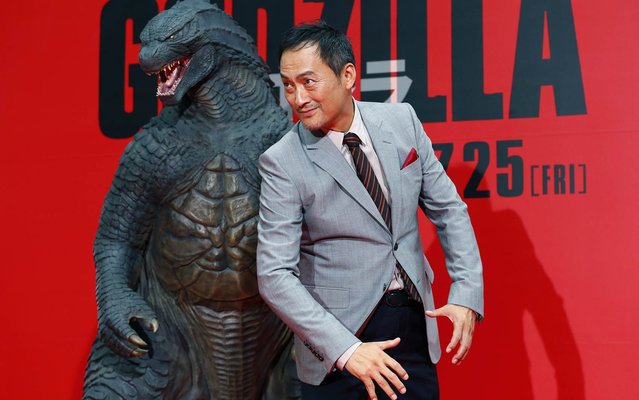 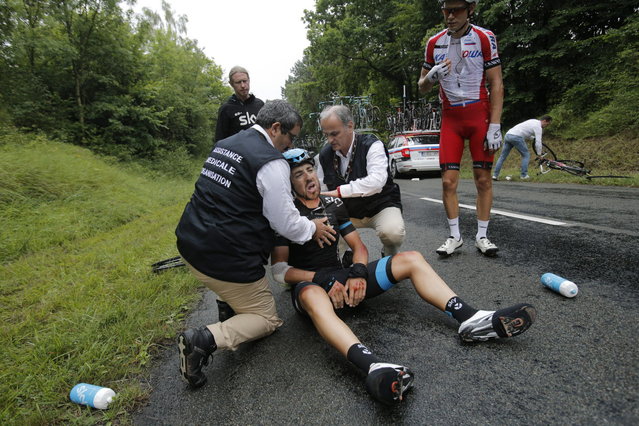 Medics tend to Spain's Xabier Zandio after he crashed during the sixth stage of the Tour de France cycling race over 194 kilometers (120.5 miles) with start in Arras and finish in Reims, France, Thursday, July 10, 2014. Zandio is the second team Sky rider to abandon the race after Britain's Christopher Froome crashed and abandoned yesterday. (Photo by Christophe Ena/AP Photo) 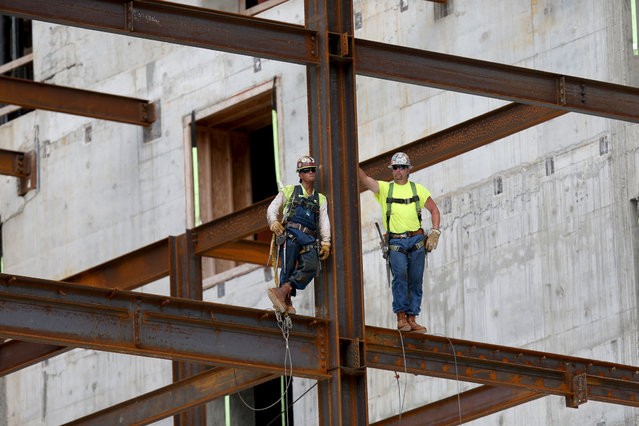 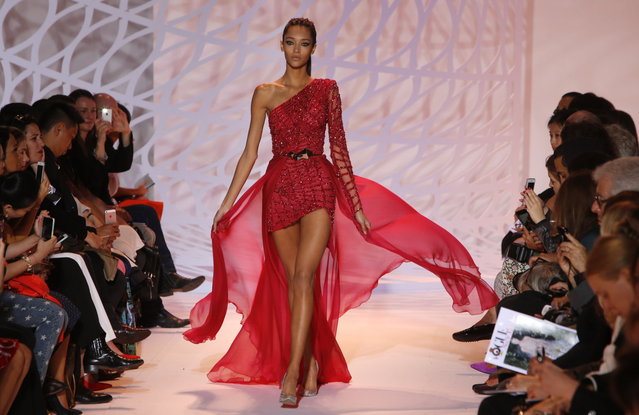 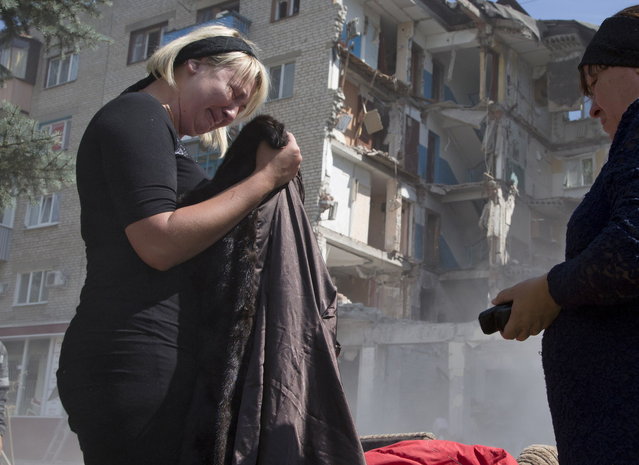 Eugenia Gubareva, left, cries after finding clothes belonging to her parents, who were killed in a building destroyed by shelling in Mikolaivka village, near the city of Slovyansk, Donetsk Region, eastern Ukraine Thursday, July 10, 2014. In the past two weeks, Ukrainian government troops have halved the amount of territory held by the rebels. Now they are vowing a blockade of Donetsk. In another sign of deteriorating morale among rebels, several dozen militia fighters in Donetsk abandoned their weapons and fatigues Thursday, telling their superiors they were returning home. (Photo by Dmitry Lovetsky/AP Photo) 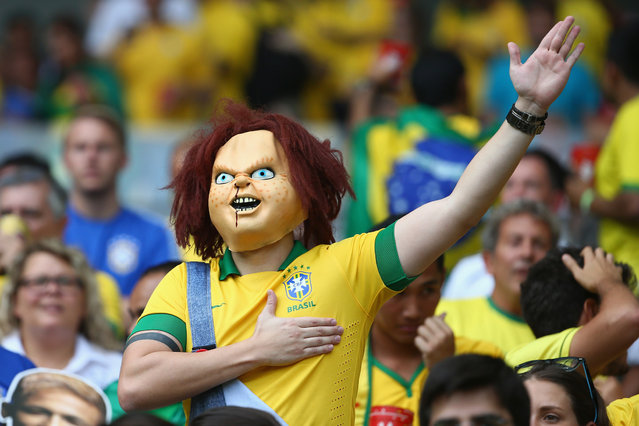 A Brazil fan enjoys the atmosphere prior to the 2014 FIFA World Cup Brazil Semi Final match between Brazil and Germany at Estadio Mineirao in Belo Horizonte, Brazil, on Jule 8, 2014. (Photo by Robert Cianflone/Getty Images) 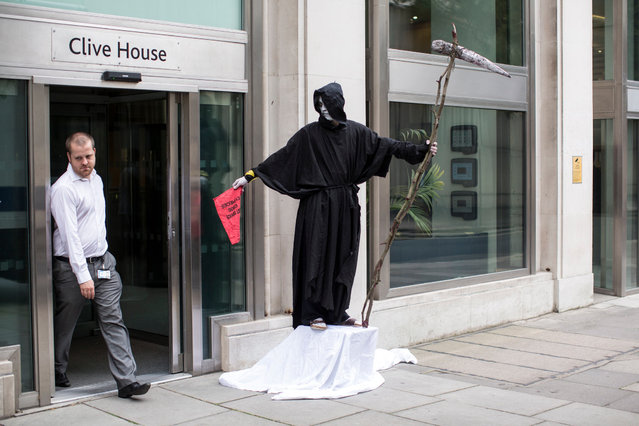 A man dressed as the Grim Reaper stands on a union picket line as he takes industrial action outside the offices for the National Offender Management Service in London, England, on Jule 10, 2014. Over one million public sector workers are expected to take strike action today across the UK over disputes with the Government concerning pay, pensions and cuts. (Photo by Oli Scarff/Getty Images) 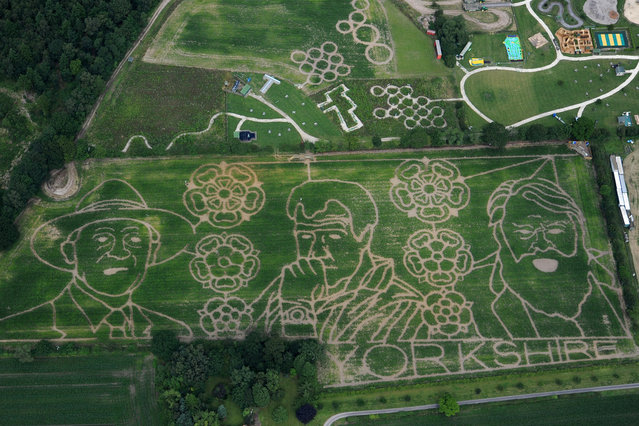 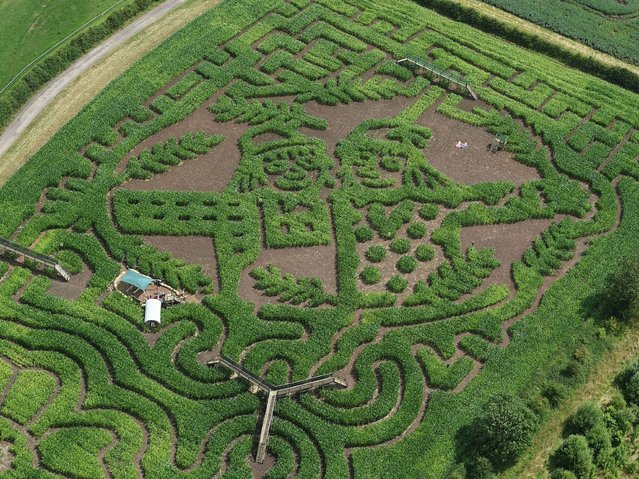 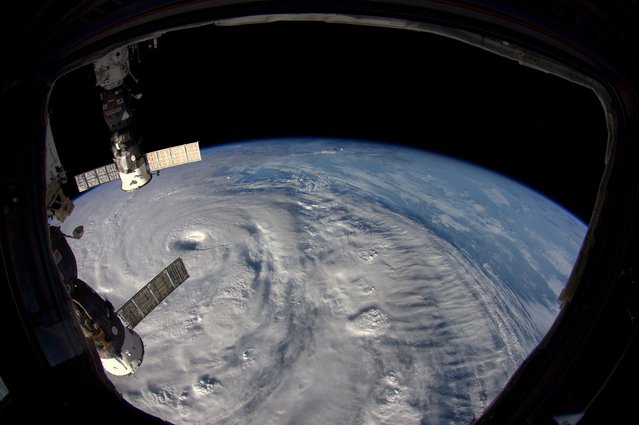 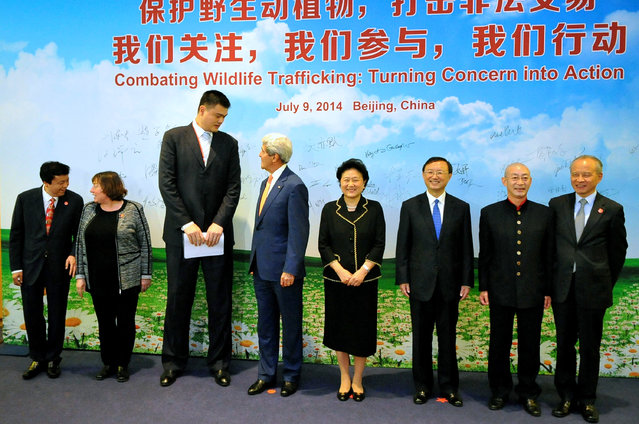 In this U.S. Department of State handout, U.S. Secretary of State John Kerry (4L) talks with former NBA player Yao Ming (3L) after thanking him for his activism during an anti-wildlife trafficking event on the sidelines of the sixth U.S.-China Strategic and Economic Dialogue on July 9, 2014 in Beijing, China. (Photo by U.S. Department of State via Getty Images) 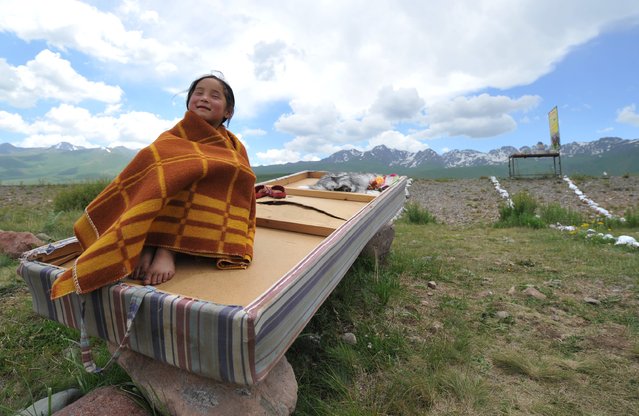 A little girl sits on a part of the couch at the Suu-Samyr plateau, 2,500 meters above the sea level, near the ancient Silk Road network of trade routes between the East and West, some 200 km outside Bishkek, the capital of Kyrgyzstan, on July 8, 2014. (Photo by Vyacheslav Oseledko/AFP Photo) 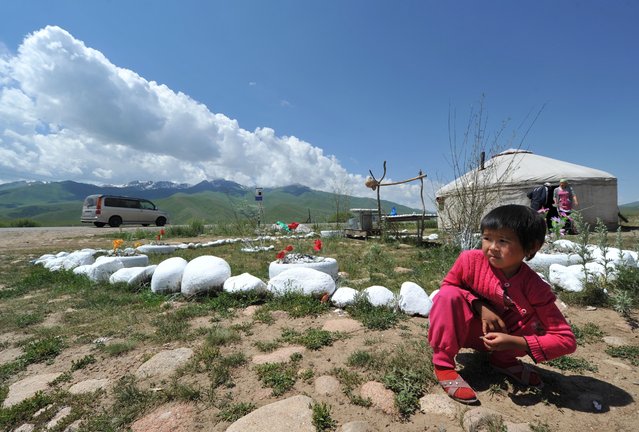 A little girl sits near a yurt, the traditional portable dwelling on nomads, at the Suu-Samyr plateau, 2,500 meters above the sea level, near the ancient Silk Road network of trade routes between the East and West, some 200 km outside Bishkek, the capital of Kyrgyzstan, on July 8, 2014. (Photo by Vyacheslav Oseledko/AFP Photo) 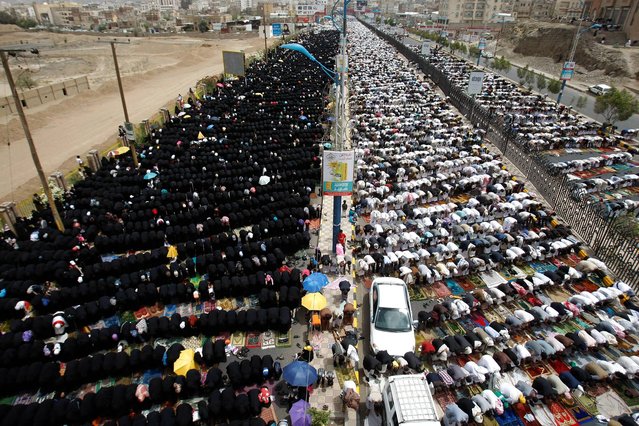 Yemeni pro-democracy protestors pray while they attend a rally to denounce terror attacks by Hawthi Shiite rebels in Amran, and show their support for Yemeni army, in Sanaa, Yemen, July 11, 2014. (Photo by Hani Mohammed/AP Photo) 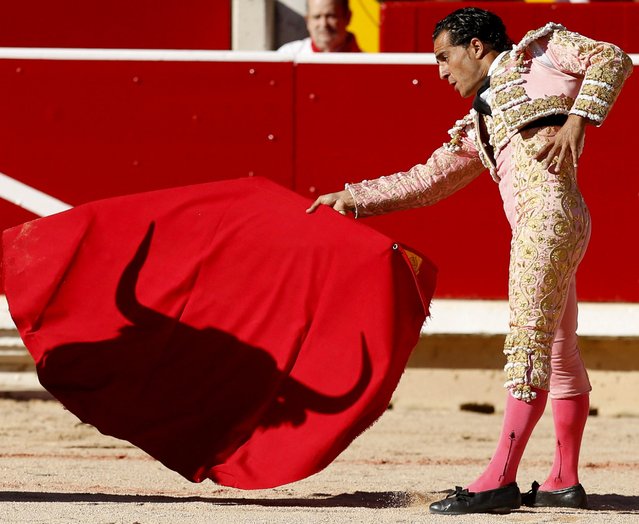