A Palestinian boy crawls next to burning tyres during a military-style graduation ceremony at Fajer Al-Entesar (dawn of victory) summer camp, organized by the Hamas movement, in Gaza City June 19, 2014. Hamas stages dozens of military-style summer camps for young Palestinians in the Gaza Strip to prepare them to “confront any possible Israeli attack”, organisers said. (Photo by Mohammed Salem/Reuters) 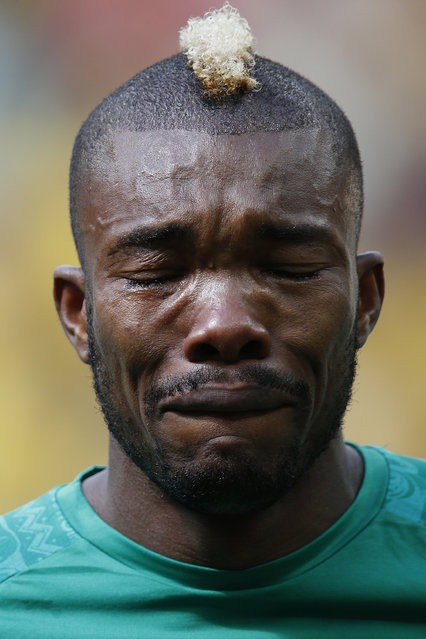 Ivory Coast's Geoffroy Serey Die cries during the playing of his national anthem before the 2014 World Cup Group C soccer match against Colombia at the Brasilia national stadium in Brasilia, June 19, 2014. (Photo by Ueslei Marcelino/Reuters) 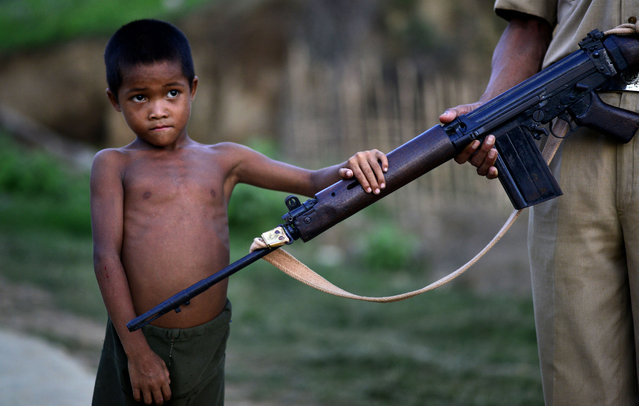 A Bru tribal boy with one of his hands placed on the gun of a security officer deployed in the Naisingpara Bru refugee relief camp, in Tripura state, India, 16 June 2014. The repatriation of the Mizoram Bru refugees will be carried out on 17 June 2014 from six Bru refugee camps who are now lodging in transit camps in neighbouring Tripura state, since they fled Mizoram in 1997 following ethnic violence. A total of 494 Bru families have been verified and they are confirmed as the genuine residents of Mizoram state. They would also be provided rice free of cost for one year. The people of the Bru community were displaced from Mizoram following ethnic conflicts with the Mizos in 1997 and since then they were sheltered in six camps at Kanchanpur in North Tripura district of Tripura state. (Photo by EPA/STR) 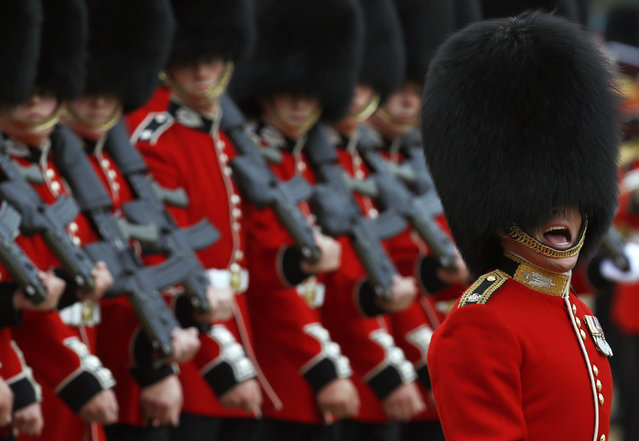 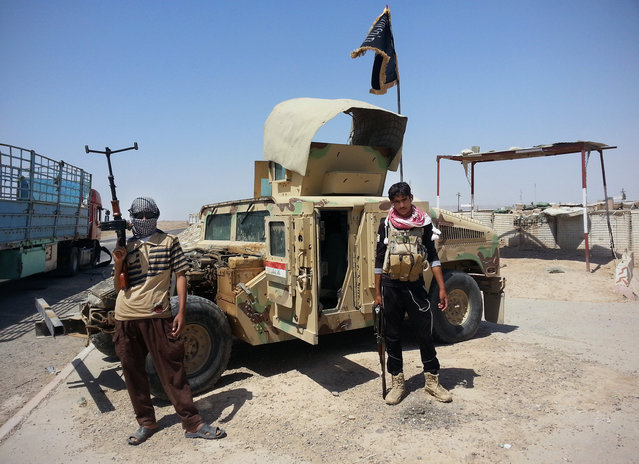 Al-Qaeda inspired militants stand with captured Iraqi Army Humvee at a checkpoint outside Beiji refinery, some 250 kilometers (155 miles) north of Baghdad, Iraq, Thursday, June 19, 2014. The fighting at Beiji comes as Iraq has asked the U.S. for airstrikes targeting the militants from the Islamic State of Iraq and the Levant. While U.S. President Barack Obama has not fully ruled out the possibility of launching airstrikes, such action is not imminent in part because intelligence agencies have been unable to identify clear targets on the ground, officials said. (Photo by AP Photo) 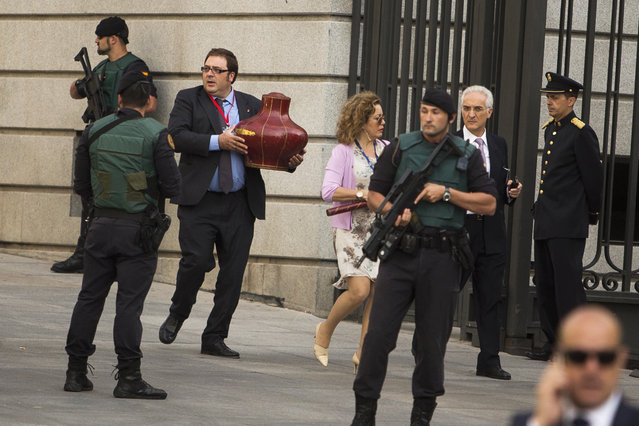 The king's crown is being carried under tight security before Spain’s newly crowned King Felipe VI arrives at the Parliament in Madrid, Spain, Thursday, June 19, 2014. Felipe is being formally proclaimed monarch Thursday after 76-year-old King Juan Carlos abdicated. Felipe was to swear an oath at a ceremony with lawmakers in Parliament in front of Spain's 18th-century crown and 17th-century scepter. (Photo by Andres Kudacki/AP Photo) 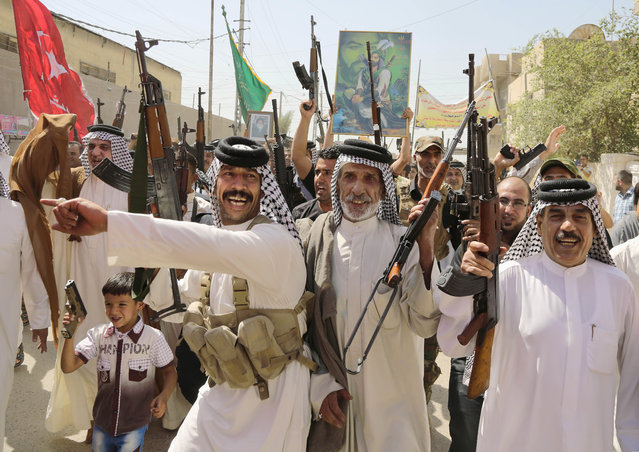 Iraqi Shiite tribal fighters raise their weapons while chanting slogans against the al-Qaida inspired Islamic State of Iraq and the Levant (ISIL), in Baghdad's Sadr city, Saturday, June 14, 2014, after authorities urged Iraqis to help battle insurgents. Hundreds of young Iraqi men gripped by religious and nationalistic fervor streamed into volunteer centers across Baghdad Saturday, answering a call by the country's top Shiite cleric to join the fight against Sunni militants advancing in the north. The poster at top depicts Imam Hussein, a revered Shiite figure. (Photo by Karim Kadim/AP Photo) 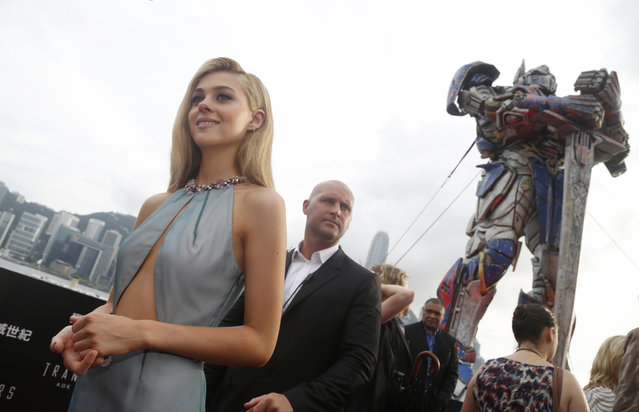 American actress Nicola Peltz poses on the red carpet as she arrives for the world premiere of the movie “Transformers 4: Age of Extinction” in Hong Kong Thursday, June 19, 2014. The latest installment in the blockbuster series of “Transformers” films is making its world premier not in the usual entertainment hubs of Los Angeles or New York but in the wealthy Chinese metropolis of Hong Kong, the latest sign of Hollywood's increasing focus on China's booming film market. (Photo by Kin Cheung/AP Photo) Shiite tribal fighters raise their weapons and chant slogans against the al-Qaida-inspired Islamic State of Iraq and the Levant (ISIL) in Basra, Iraq's second-largest city, 340 miles (550 kilometers) southeast of Baghdad, Iraq, Monday, June 16, 2014. Sunni militants captured a key northern Iraqi town along the highway to Syria early on Monday, compounding the woes of Iraq's Shiite-led government a week after it lost a vast swath of territory to the insurgents in the country's north. (Photo by Nabil Al-Jurani/AP Photo) 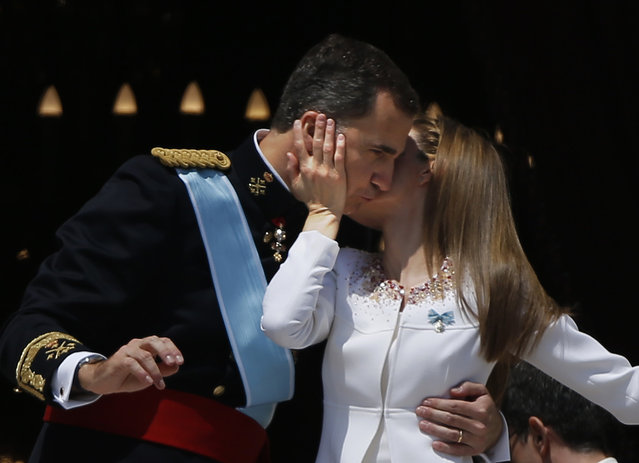 Spain’s newly crowned King Felipe VI is kissed by his wife Queen Letizia on a balcony of the Royal Palace in Madrid, Spain, on Thursday, June 19, 2014. Felipe is being formally proclaimed monarch Thursday after 76-year-old King Juan Carlos abdicated so that younger royal blood can rally a country beset by economic problems, including an unemployment rate of 25 percent. Felipe swore an oath at a ceremony with lawmakers in Parliament in front of Spain's 18th-century crown and 17th-century scepter. (Photo by Emilio Morenatti/AP Photo) 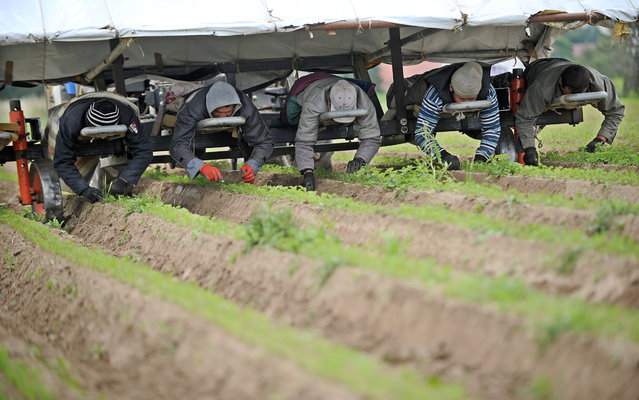 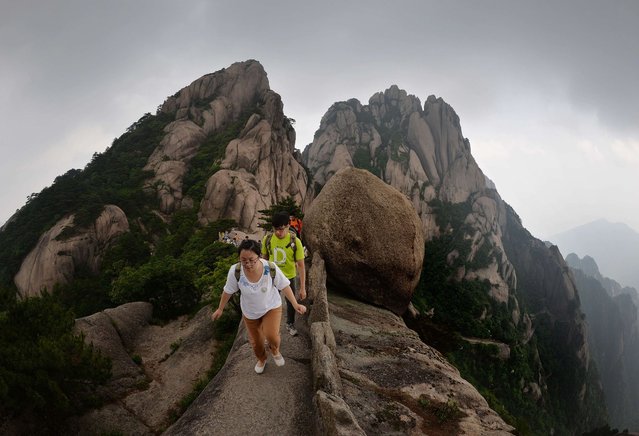 This photo taken on June 16, 2014 shows Chinese tourists hiking on Lotus Peak which is the most revered of the Huangshan (Yellow Mountains) peaks at the park in Anhui Province. The UNESCO World Heritage Site is one of China's major tourist destinations and has been a source of inspiration to Chinese painters, writers and poets for thousands of years. (Photo by Mark Ralston/AFP Photo) 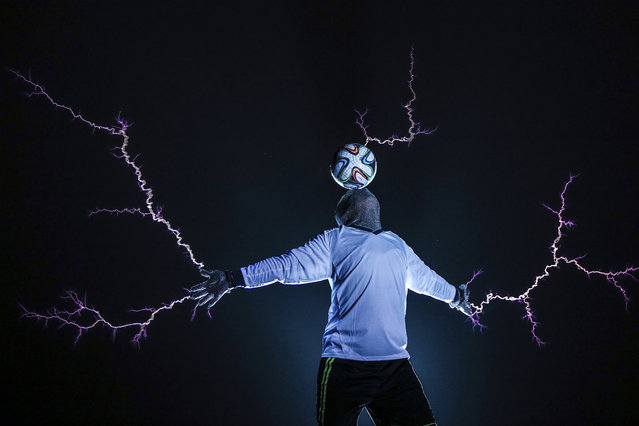 A member of the Thunderbolt Craziness band wearing a metal suit balances a soccer ball on his head as electricity is discharged from Tesla coils during a performance to celebrate the 2014 Brazil World Cup, in Changle, Fujian province June 12, 2014. The band specialises in producing electric arcs from Tesla coils that have been charged with one million volts of electricity. (Photo by Reuters/Stringer) 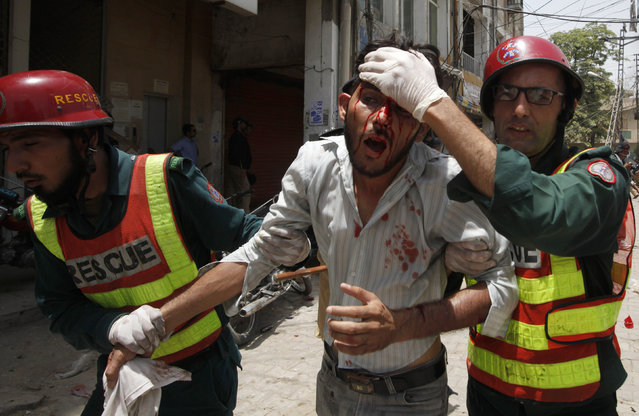 Rescue workers assist an injured supporter of Muhammad Tahirul Qadri, a Sufi cleric and leader of political party Pakistan Awami Tehreek, during a protest in Lahore June 17, 2014. At least eight people including a policeman were killed and dozens wounded in Pakistan on Tuesday when protesters clashed with police in a standoff over a Canada-based anti-Taliban preacher. (Photo by Mohsin Raza/Reuters) 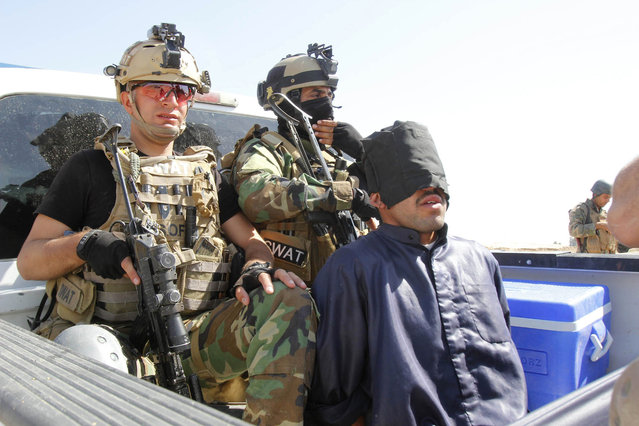 Personnel from the Kurdish security forces detain a man suspected of being a militant belonging to the al Qaeda-linked Islamic State in Iraq and the Levant (ISIL) in the outskirts of Kirkuk June 16, 2014. Iraq's Shi'ite rulers defied Western calls on Tuesday to reach out to Sunnis to defuse the uprising in the north of the country, declaring a boycott of Iraq's main Sunni political bloc and accusing Sunni power Saudi Arabia of promoting “genocide”. (Photo by Ako Rasheed/Reuters) 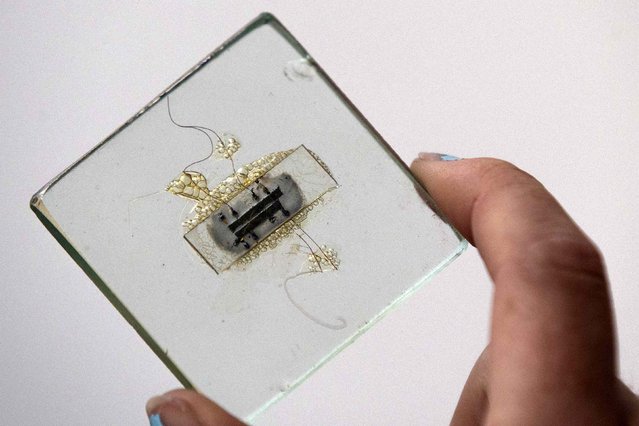 A 1958 prototype for a Texas Instruments Inc. microchip, mounted on glass and enclosed in a plastic case, is shown by a Christie's Auction house employee in New York June 17, 2014. The protoype microchip used by Texas Instruments Inc.'s Jack Kilby in the world's first electronic circuit is estimated to sell for $1 to $2 million at auction on June 19. (Photo by Brendan McDermid/Reuters) 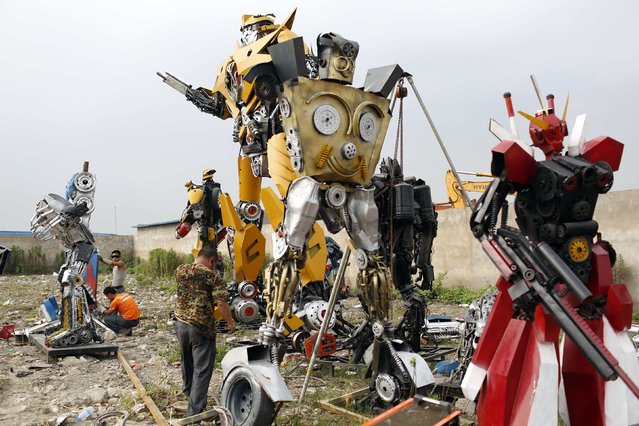 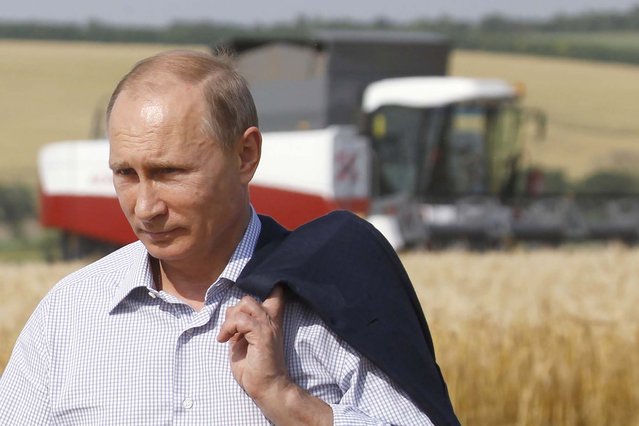 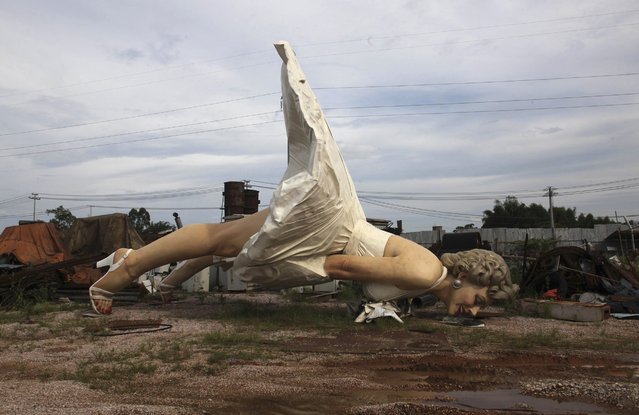 A giant statue of U.S. actress Marilyn Monroe is seen at the dump site of a garbage collecting company in Guigang, Guangxi Zhuang Autonomous Region June 18, 2014. The eight-metre-tall stainless steel statue, which weighs about eight tonnes, was made by several Chinese artists for over two years, based on the famous scene from her movie “The Seven Year Itch”. The statue was transported to the garbage collecting company early this week for unknown reasons after being showed outside a business centre in the city for only 6 months, local media reported. (Photo by Reuters/China Daily) 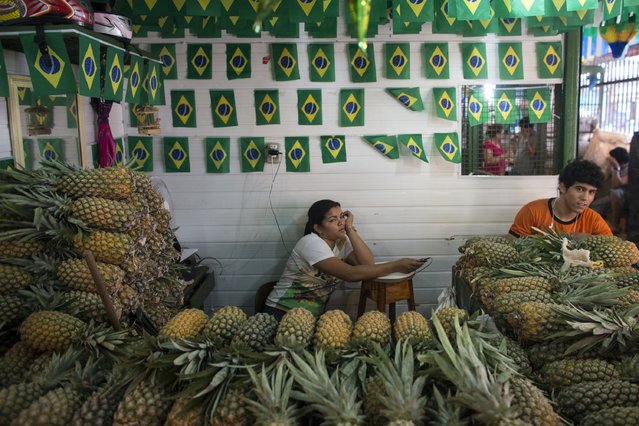