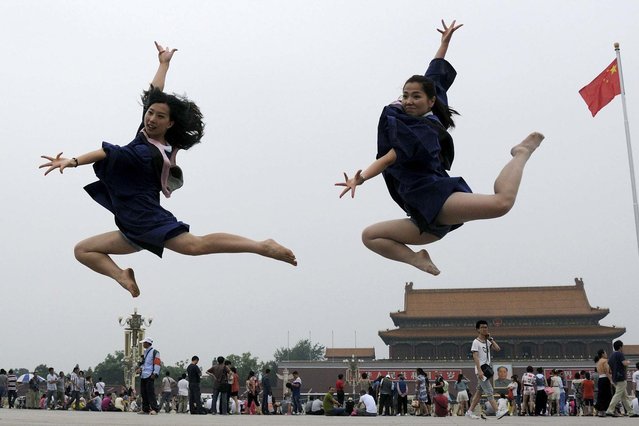 Graduates jump as they pose for photographs in front of the Tiananmen Gate and the giant portrait of late Chinese Chairman Mao Zedong, on the Tiananmen Square in Beijing, June 19, 2014. (Photo by Reuters/Stringer) 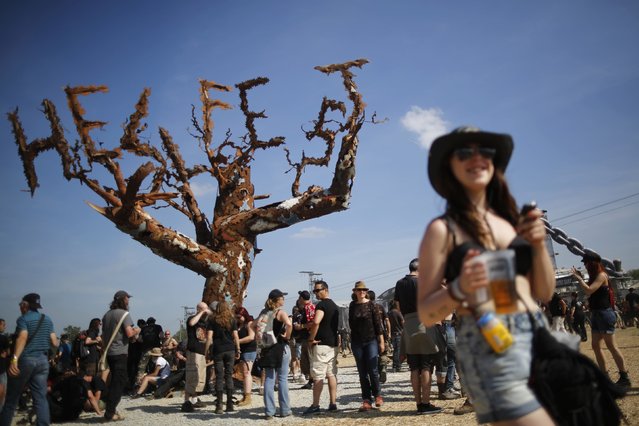 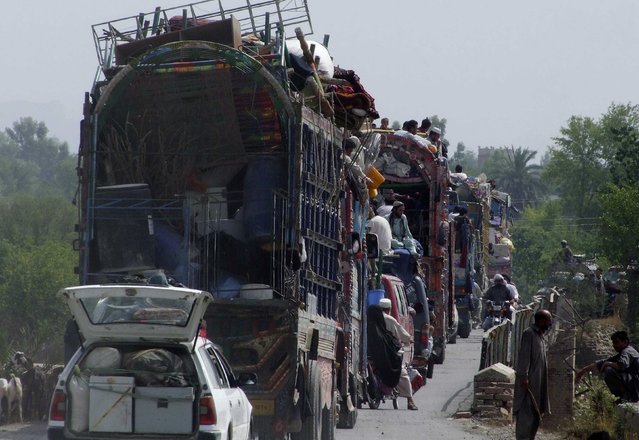 People fleeing the military offensive against the Pakistani militants in North Waziristan, travel atop a vehicle with their belongings while entering Bannu, located in Pakistan's Khyber-Pakhtunkhwa province, June 20, 2014. Pakistan announced the start of a full-on military offensive on Sunday to quash an increasingly assertive Pakistani Taliban insurgency in the ethnic Pashtun region, the base of some of the country's most feared al Qaeda-linked militants. (Photo by Ihsan Khattak/Reuters) 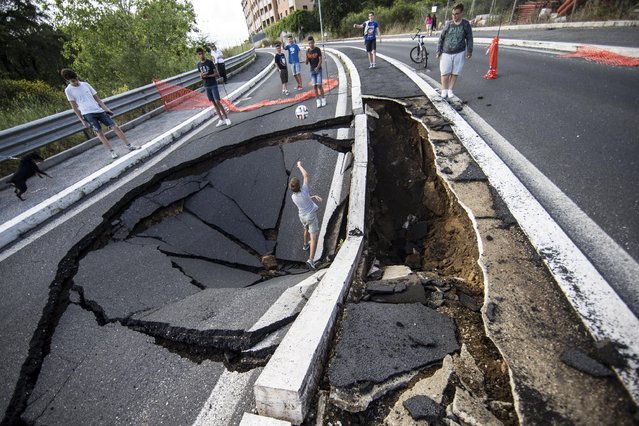 Children play inside the hole caused by bad weather in Luigi Moretti in Rome, Italy, 16 June 2014. Severe weather including heavy rains led to flooding in areas of Rome's historic centre including Via dei Fori Imperiali and brought down parts of trees near the Colosseum, authorities said Monday. (Photo by Massimo Percossi/EPA) 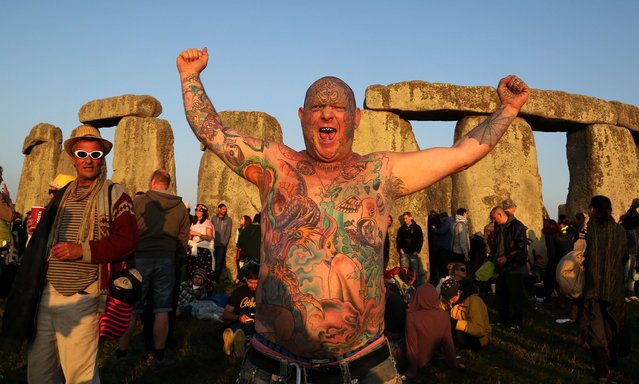 A reveler called Mad Alan (real name) celebrates the 2014 summer solstice, the longest day of the year, at sunrise at the prehistoric monument Stonehenge, near Amesbury in Southern England, on June 21, 2014. The festival, which dates back thousands of years, celebrates the longest day of the year when the sun is at its maximum elevation. Modern druids and people gather at the landmark Stonehenge every year to see the sun rise on the first morning of summer. (Photo by Geoff Caddick/AFP Photo) 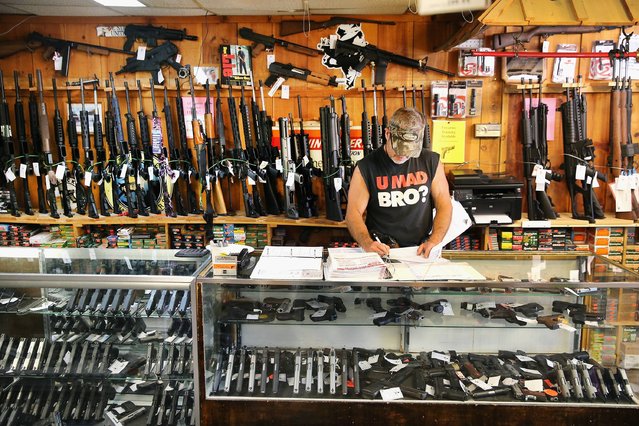 Danny Egan fills out mandatory gun paperwork Freddie Bear Sports on June 16, 2014 in Tinley Park, Illinois. In a 5-4 decision the Supreme Court ruled that it is a crime for one person to buy a gun for another while lying to the dealer about who the gun is for. The law had been challenged by retired police officer Bruce Abramski who was charged with making a "straw purchase" after buying a gun for his uncle, a lawful gun owner, in order to get a police discount at the dealer. When asked on the paperwork if the gun was for him he checked yes. (Photo by Scott Olson/Getty Images) 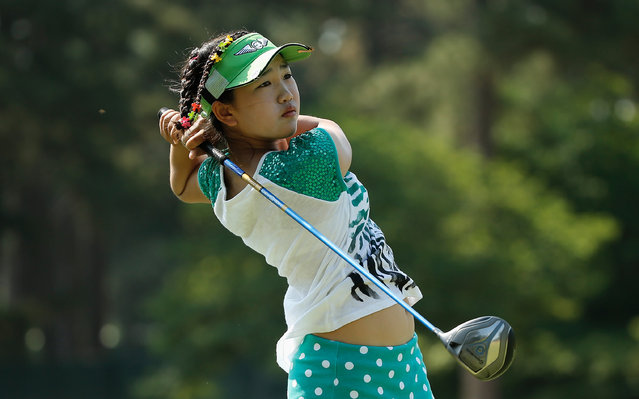 Eleven-year old Amateur Lucy Li of the United States hits a shot during a practice round prior to the start of the 69th U.S. Women's Open at Pinehurst Resort & Country Club, Course No. 2 on June 17, 2014 in Pinehurst, North Carolina. (Photo by Scott Halleran/Getty Images) 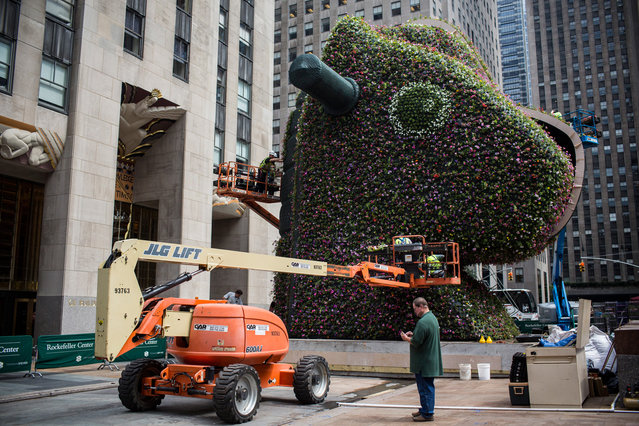 “Split-Rocker” a 37-foot tall flower sculpture by artist Jeff Koons, is assembled by workers outside Rockefeller Center on June 17, 2014 in New York City. The sculpture depicts a half toy pony, half toy horse. (Photo by Andrew Burton/Getty Images) 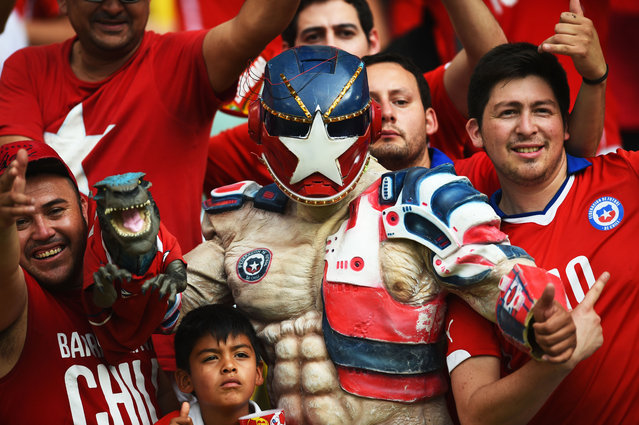 Chile fans cheer prior to the 2014 FIFA World Cup Brazil Group B match between Spain and Chile at Maracana on June 18, 2014 in Rio de Janeiro, Brazil. (Photo by Matthias Hangst/Getty Images) 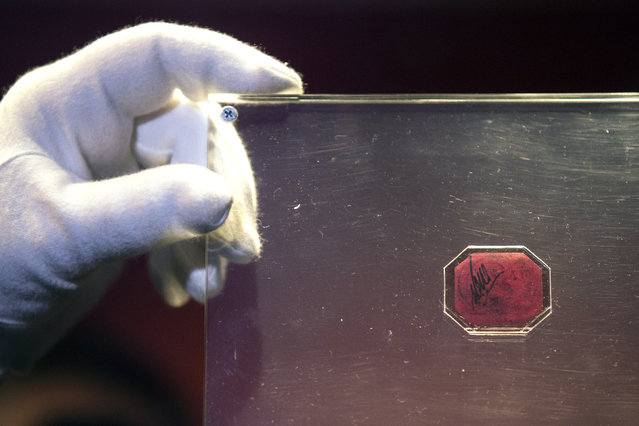 An employee of Sotheby's auction house holds a case containing the sole-surviving “British Guiana One-Cent Magenta” stamp dating from 1856, on June 2, 2014 in London, England. The unique stamp is expected to fetch 20 million USD when auctioned in New York, USA on June 17, 2014. The stamp was initially discovered in 1873 by a 12-year old Scottish boy living in British Guiana, South America who sold it to a local stamp collector for several shillings. (Photo by Oli Scarff/Getty Images) 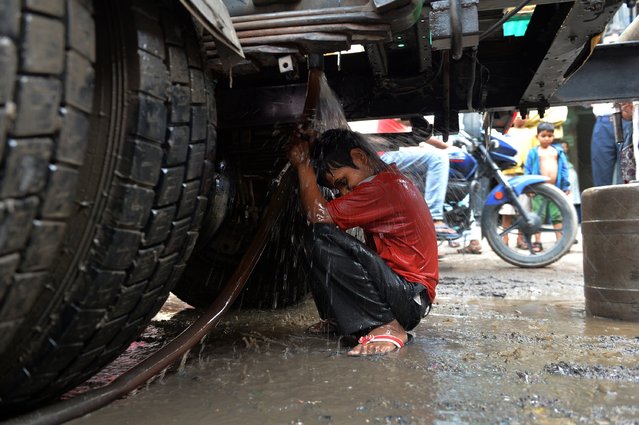 An Indian child sits underneath a gushing outlet of a water distribution tanker in New Delhi on June 16, 2014. The sprawling Indian capital, with a population of more than 16 million sweltering in 45-47 degree summer heat, relies on four neighbouring states for its water – Haryana, Uttar Pradesh, Punjab and Uttarakhand. (Photo by Chandan Khanna/AFP Photo) 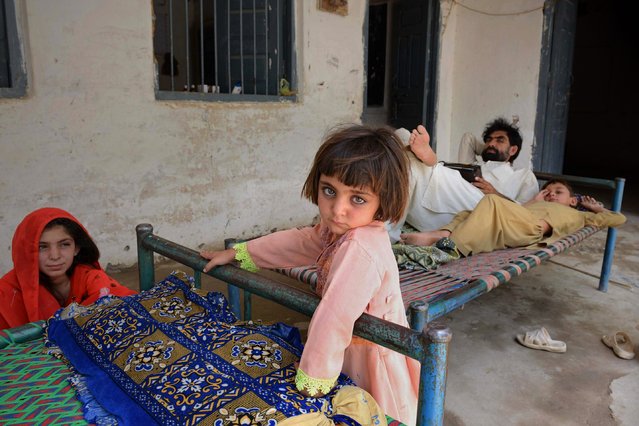 An internally displaced family from North Waziristan, escaping a Pakistani military offensive against militants in the region, rest at a school in Bannu on June 17, 2014. Pakistan Prime Minister Nawaz Sharif has urged Afghan President Hamid Karzai to help stop insurgents from escaping a major military offensive, as residents who fled the area anxiously awaited news from those left behind June 17. (Photo by A. Majeed/AFP Photo) 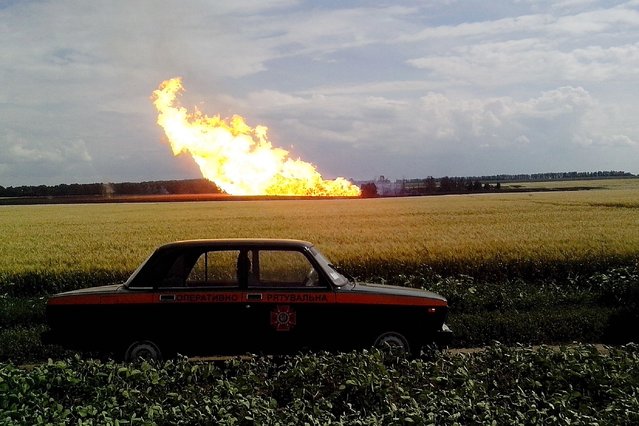 This handout picture taken and released by the Ukrainian Emergency Service on June 17, 2014 shows a police car parked beside a field near a fire on the gas pipeline the village of Iskivtsi in the Lokhvytsia region. A blast hit a major Ukrainian pipeline on June 16 used to transport Russian natural gas to European clients, Ukrainian police officials said. The Urengoi-Pomary-Uzhgorod Pipeline, also known as the Trans-Siberian Pipeline, was damaged in the northeastern Lokhvytsia region, the local police department said, adding that no one appeared to be injured in the incident. (Photo by AFP Photo/Urkainian Emergency Press-Service) 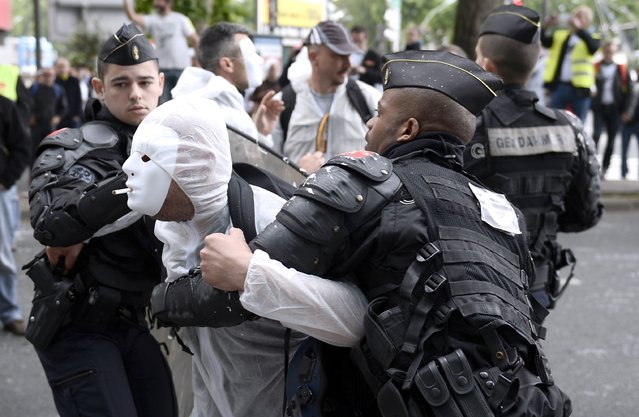 French riot police detain an employees of Seita, a subsidiary of Imperial Tobacco, wearing a white suit and mask with a cigarette in his mouth, during a demonstration outside the company's headquarters in Paris on June 17, 2014. More than 200 employees protested against the restructuring plan of the company, details of which were announced to unions at an Extraordinary Central Works Council. In France, the employment preservation plan (plan de sauvegarde de l'emploi, PSE) of Seita, announced in April, foresees the closure of the factory in Carquefou and of the research center of Bergerac, in addition to job cuts in Fleury-les-Aubrais and at the headquarters in Paris. (Photo by Stephane De Sakutin/AFP Photo) 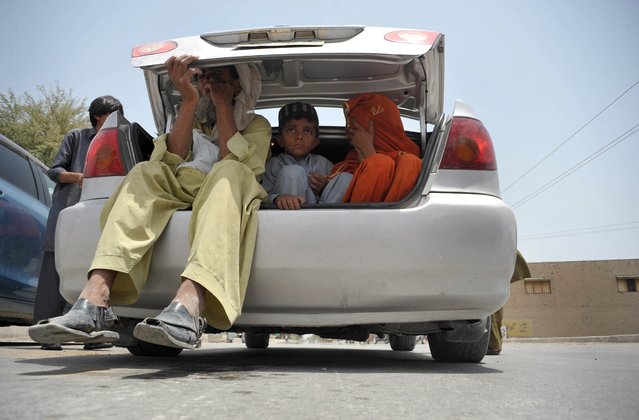 Pakistani civilians, fleeing from a military operation in North Waziristan tribal agency, arrive in Bannu district on June 18, 2014. Pakistan eased a curfew in a tribal area to allow civilians to flee a major offensive against the Taliban, signalling a likely escalation in the campaign as the US hit the militants with drone strikes. More than 1,000 vehicles arrived June 18 in the town of Bannu, a traditional haven for those fleeing violence in restive North Waziristan. (Photo by Hasham Ahmed/AFP Photo) 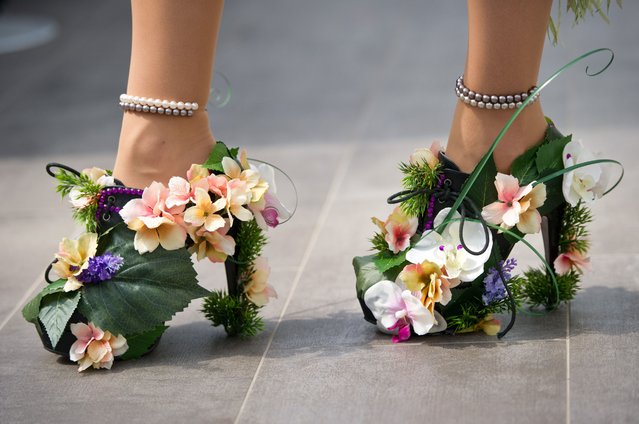 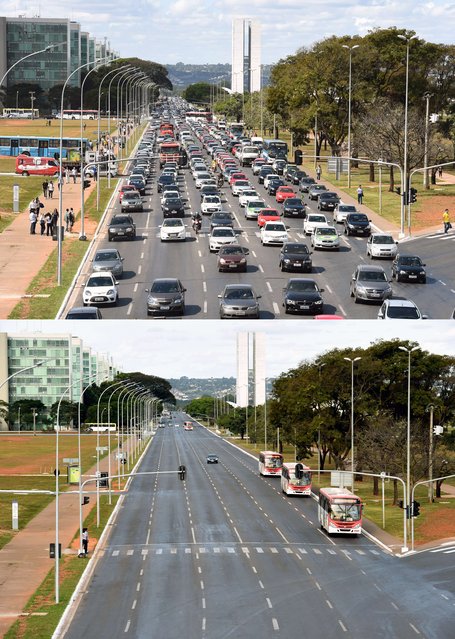 This combo shows the Esplanade of Ministry in Brasilia, Brazil, two hours before the start of the match between Brazil and Mexico (top) and in the beginning of the match, on June 17, 2014. Brazil faces Mexico for group A of the FIFA World Cup 2014 at Castelao Arena in Fortaleza. (Photo by Evaristo Sa/AFP Photo) 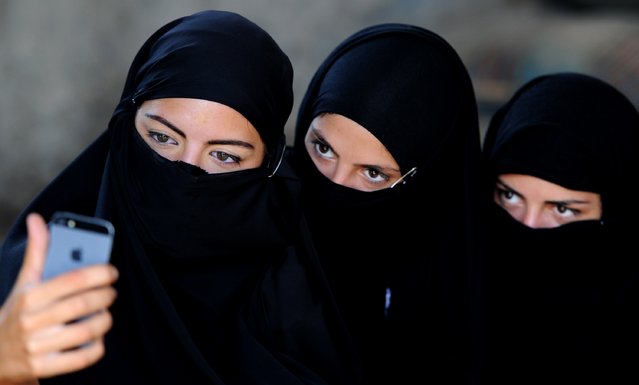 Georgian actors take a picture of themselves wearing veils before taking part in a joint Georgian-US military counterterrorism exercise called “Agile Spirit 2014” at the Vaziani military base outside Tbilisi on June 18, 2014. (Photo by Vano Shlamov/AFP Photo) 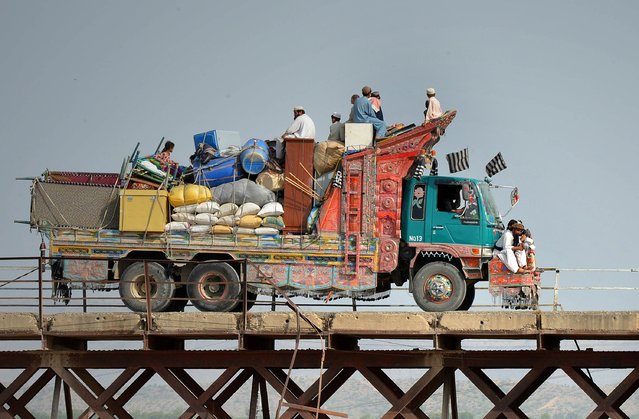 Pakistani civilians, fleeing from a military operation in North Waziristan tribal agency, cross a bridge on their arrival in Bannu district on June 20, 2014. Pakistani helicopter gunships pounded militant targets in the country's northwest June 20 killing up to 20 rebels, as the number of civilians fleeing an expected ground offensive passed 150,000. (Photo by A. Majeed/AFP Photo) 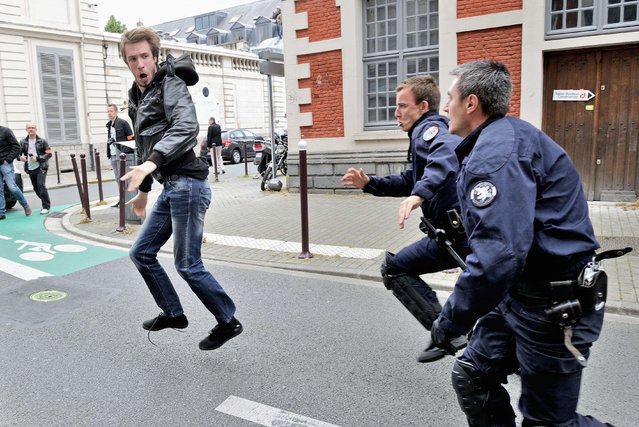 Policemen chase away a protester during a demonstration of artists and entertainment workers, known as “intermittents du spectacle”, near the Regional Directorate of Cultural Affairs (DRAC) on June 20, 2014 in Lille, northern France, to protest against the government's plans to reform their status. (Photo by Philippe Huguen/AFP Photo)
Edit Del
21 Jun 2014 12:37:00, post received 0 comments
Publication archive:
←   →
Popular tags:
All tags
Last searches: