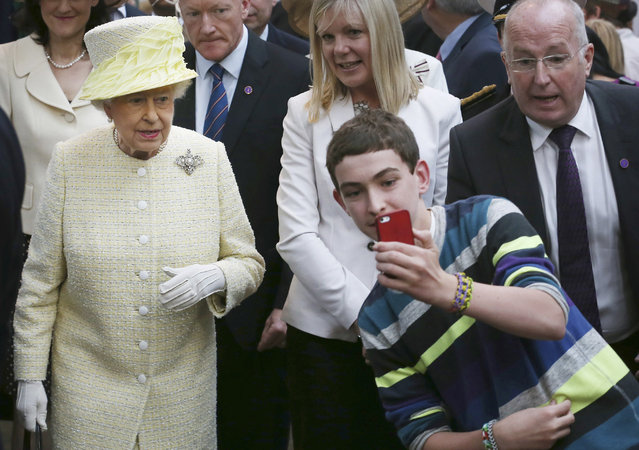 A local youth takes a selfie photograph in front of Queen Elizabeth II during a visit to St George's indoor market on in Belfast Tuesday June 24, 2014. The Queen is on a 3 day visit to Northern Ireland . (Photo by Peter Macdiarmid/AP Photo) 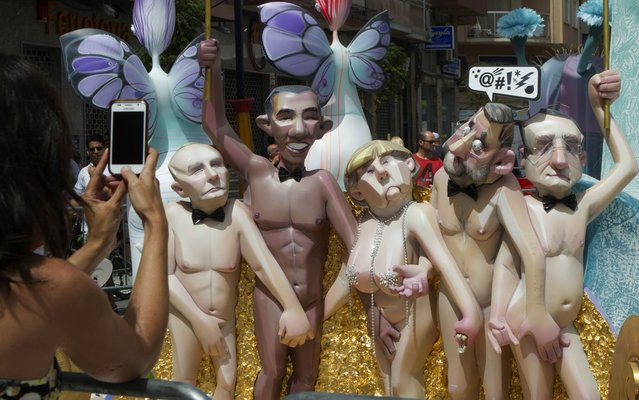 Hogueras, satirical structures made of cardboard portraying current events and personalities, of Russian Prime Minister Vladimir Putin, US President Barack Obama, German Chanceller Angela Merkel, Spain's Prime Minister Mariano Rajoy and French President Francois Hollande are displayed ahead of the annual San Juan (Saint John) celebrations in Alicante on June 23, 2014. Fires are lit throughout Spain for Saint John where the Hogueras and objects people no longer want are burnt as individuals make wishes as they jump through the flames. (Photo by Jose Jordan/AFP Photo) 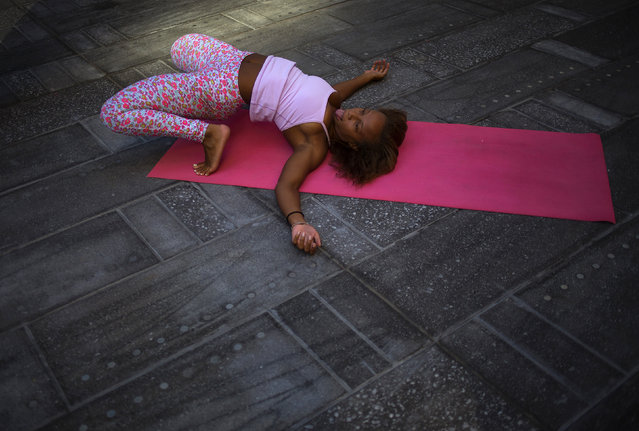 A woman practices yoga in Times Square as part of a Summer Solstice celebration in New York June 21, 2014. (Photo by Eric Thayer/Reuters) 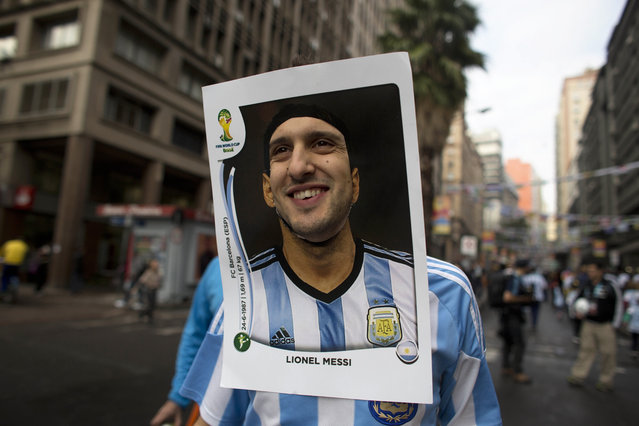 An Argentina soccer fan wears a cutout image of Argentine soccer star Lionel Messi as he heads to the stadium to see the World Cup match between Argentina and Nigeria in Porto Alegre, Brazil, Wednesday, June 25, 2014. (Photo by Dario Lopez-Mills/AP Photo) 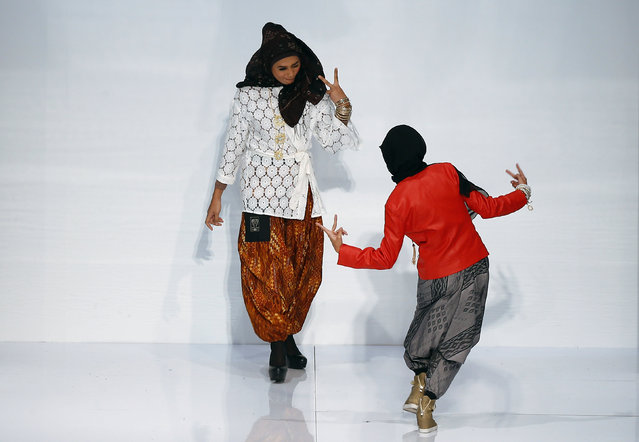 Models present creations by Afdlin Shauki during the Islamic Fashion Festival at Kuala Lumpur Fashion Week June 20, 2014. The KL Fashion week will be held from June 18 to June 22. (Photo by Samsul Said/Reuters) 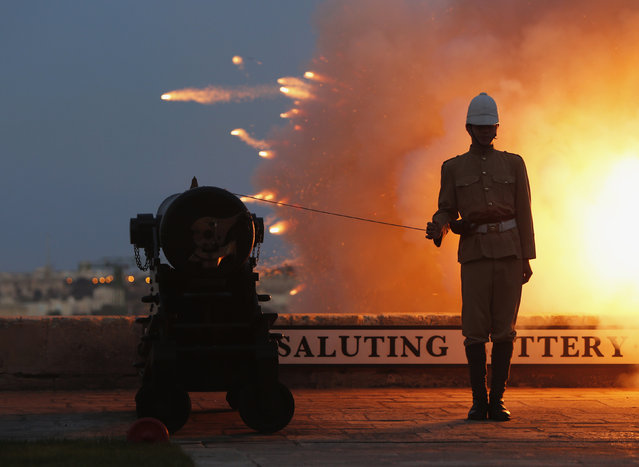 A National Heritage Trust historical re-enactor in Victorian-era Royal Malta Artillery uniform waits to fire one of several cannons during an activity to mark the feast day of Saint John the Baptist, patron saint of the Knights of the Order of Saint John, on the bastions of Valletta, June 23, 2014. The Order ruled Malta between 1530 and 1798. (Photo by Darrin Zammit/Reuters) 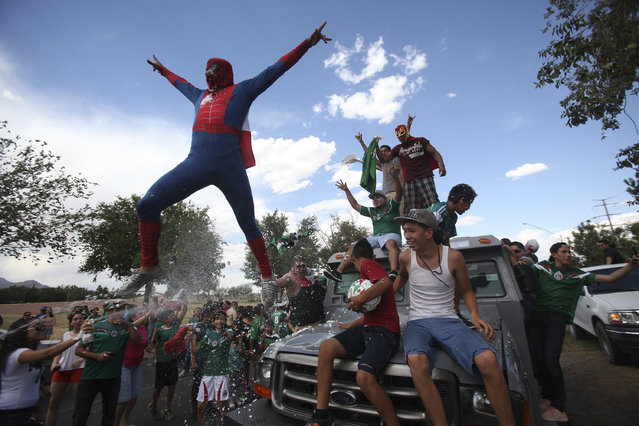 A Mexican soccer fan, dressed in a Spiderman costume, jumps from a vehicle as he celebrates Mexico's 2014 World Cup soccer match win over Croatia, in Ciudad Juarez June 23, 2014. (Photo by Jose Luis Gonzalez/Reuters) Kurdish peshmerga fighters take their positions behind a wall on the front line with militants from the al-Qaida-inspired Islamic State in Iraq and the Levant (ISIL), in Tuz Khormato, 100 kilometers (62 miles) south of the oil rich province of Kirkuk, northern Iraq, Wednesday, June 25, 2014. A defiant Prime Minister Nouri al-Maliki rejected calls Wednesday for an interim “national salvation government” intended to undermine the Sunni insurgency by presenting a unified front among Iraq's three main groups, calling it a “coup against the constitution”. (Photo by Hussein Malla/AP Photo) 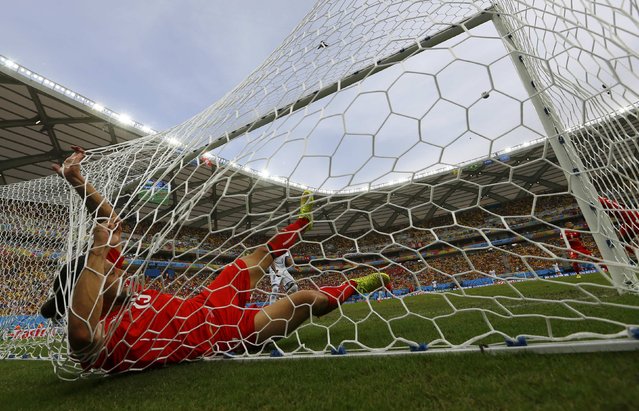 Switzerland's Ricardo Rodriguez falls into the goal net after making a save during their 2014 World Cup Group E soccer match against Honduras at the Amazonia arena in Manaus June 25, 2014. (Photo by Michael Dalder/Reuters) 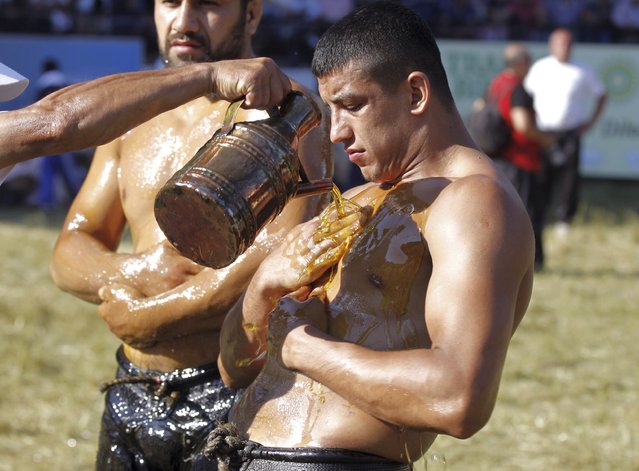 A participant rubs his body with oil during the 653th annual Kirkpinar oil wrestling tournament at the Sarayici arena in Edirne, northwestern Turkey, June 22, 2014. Wrestlers attend the annual Kirkpinar oil wrestling festival to compete in different categories during the three-day tournament in western Turkey, near the Turkish-Bulgarian border. (Photo by Osman Orsal/Reuters) 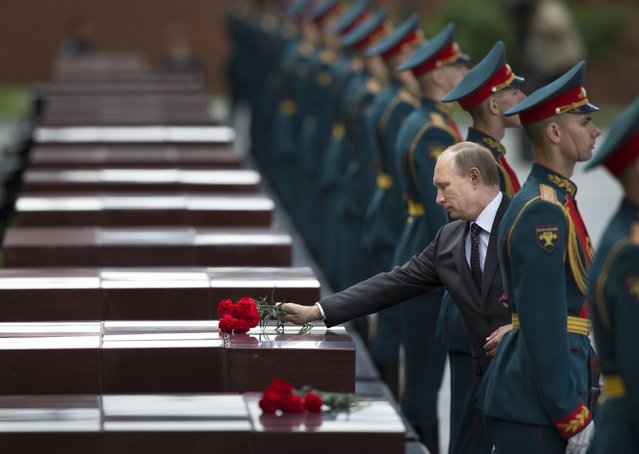 Russian President Vladimir Putin, second right, takes part in a wreath laying ceremony at the Tomb of the Unknown Soldier outside Moscow's Kremlin Wall, in Moscow, Russia, Sunday, June 22, 2014, to mark the 73rd anniversary of the Nazi invasion of the Soviet Union. (Photo by Alexander Zemlianichenko/AP Photo) 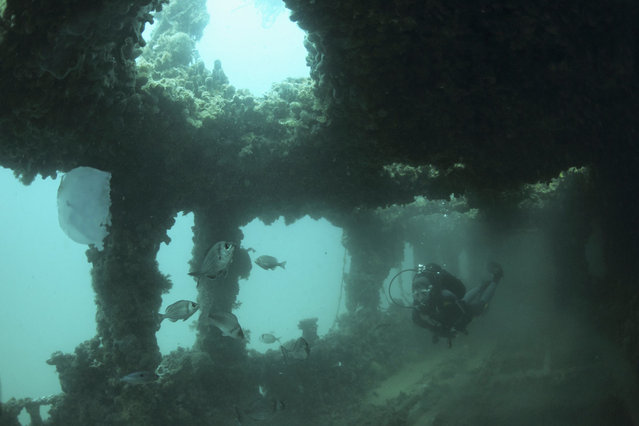 A diver swims inside the wreck of the Baron Gautsch ship, near the Adriatic town of Rovinj June 22, 2014. The 100th anniversary of the sinking of the Baron Gautsch, an Austro-Hungarian steamboat which sank in the northern Croatian Adriatic sea, will be marked on August 13, 2014. The ship, originally used to service passenger lines, had been leased by the Austro-Hungarian Army following the July 1914 outbreak of World War One to transport troops, only to run into a friendly minefield off the Brijuni islands less than a month later. Estimates say between 240 and 390 people perished in the sinking, making it one of the biggest losses of life in World War One. Today the shipwreck lies at a depth of 40 metres off the coast of Rovinj and is said to be the most popular site for divers in the Adriatic. (Photo by Antonio Bronic/Reuters) 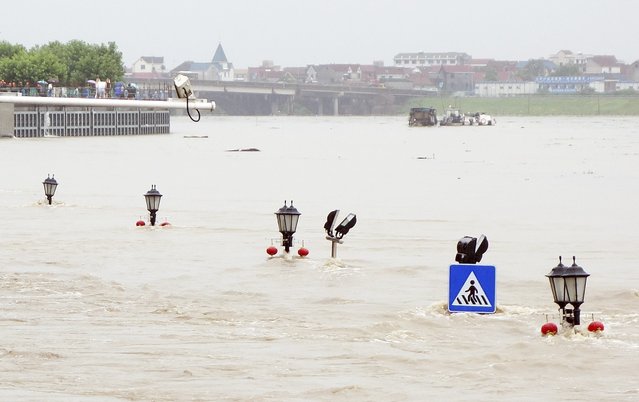 A traffic sign and the tips of street lamps are seen among floodwaters as a riverside street is submerged by an overflowing river after heavy rainfalls hit Lanxi, Zhejiang province June 22, 2014. Severe rainstorms in southern China have left at least 26 dead and three others missing. The Ministry of Civil Affairs says 4.9 million people have been affected, Xinhua News Agency reported. (Photo by Reuters/Stringer) Afghan girls practice Taekwando, at a Gym in Kabul, Afghanistan, 25 June 2014. For nearly two decades during the Taliban rule in Afghanistan, sports and games including boxing, soccer, volleyball, kite flying and chess had been banned as immoral and unlawful. During the Taliban regime it was forbidden for women to participate in such sports and games. The Taliban's Islamist regime was toppled by a US-led campaign in late 2001. (Photo by Jawad Jalali/EPA) 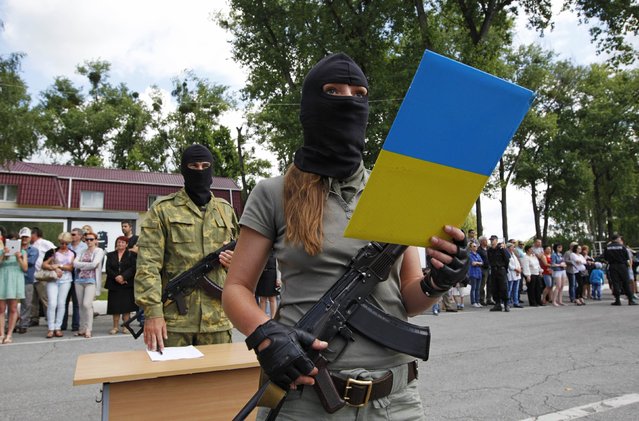 A member of the “Donbass” self-defence battalion swears the oath to be officially included into the reserve battalion of the National Guard of Ukraine near Kiev June 23, 2014. (Photo by Valentyn Ogirenko/Reuters) 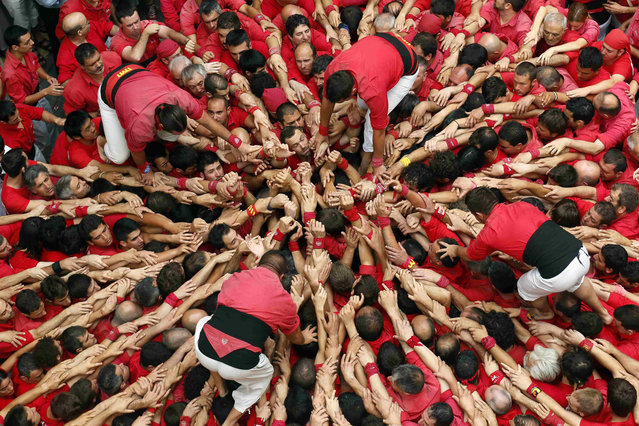 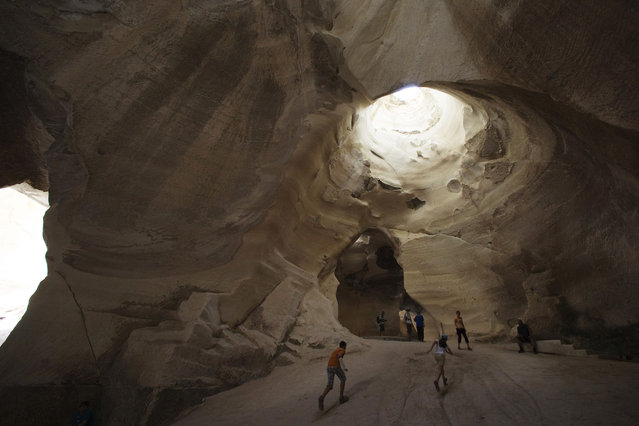 Visitors walk inside a cave situated below the ancient towns of Maresha and Beit Guvrin in the Judean Lowlands June 24, 2014. UNESCO designated the caves of Maresha and Beit Guvrin as a world heritage site on Sunday. The site features expansive man-made ancient tunnel systems, some dating back as early as the first century BC. Picture taken June 24, 2014. (Photo by Finbarr O'Reilly/Reuters) 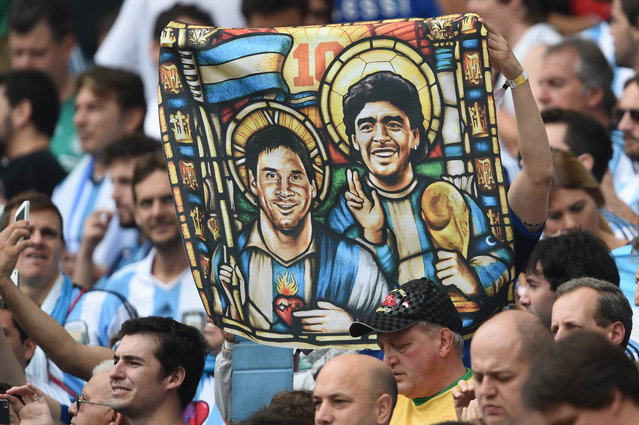 An Argentina's fan holds an image of Argentina's forward Lionel Messi and former footballer Diego Maradona as saints, before for the Group F football match between Nigeria and Argentina at the Beira-Rio Stadium in Porto Alegre during the 2014 FIFA World Cup on June 25, 2014. (Photo by Pedro Ugarte/AFP Photo) 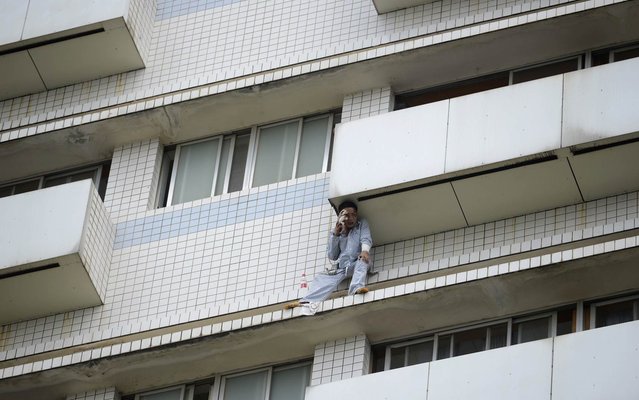 A patient sits outside a hospital building in Changsha, Hunan province, China, on June 25, 2014. Firefighters saved the patient who broke a window on the eighth floor and attempted suicide. The patient was sent to the hospital after a car accident and was confirmed having mental aberrations. (Photo by Reuters/Stringer) 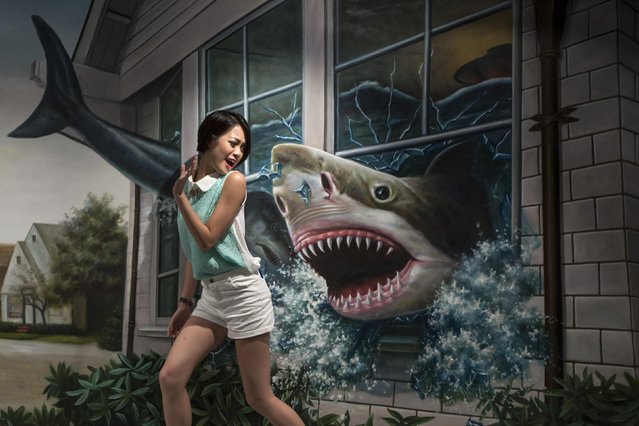 A woman poses for a photograph in front of a 3D painting at HK 3D Museum in Hong Kong June 26, 2014. (Photo by Tyrone Siu/Reuters) 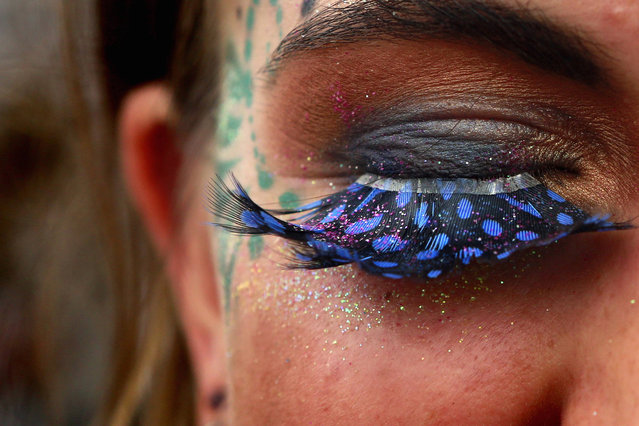 A festival goer displays her false eyelashes at Worthy Farm in Somerset, on the second day of the Glastonbury music festival June 26, 2014. (Photo by Cathal McNaughton/Reuters) 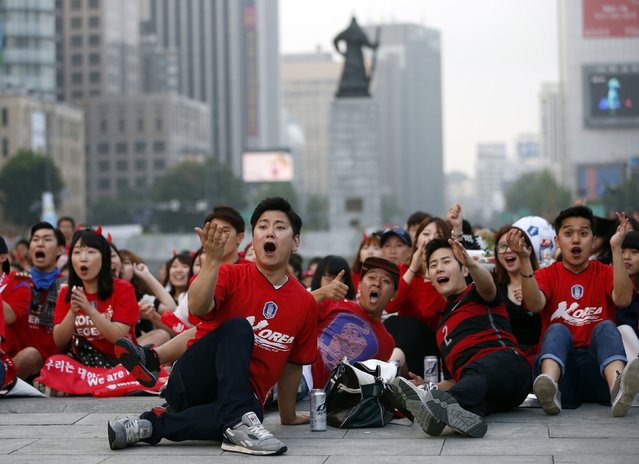 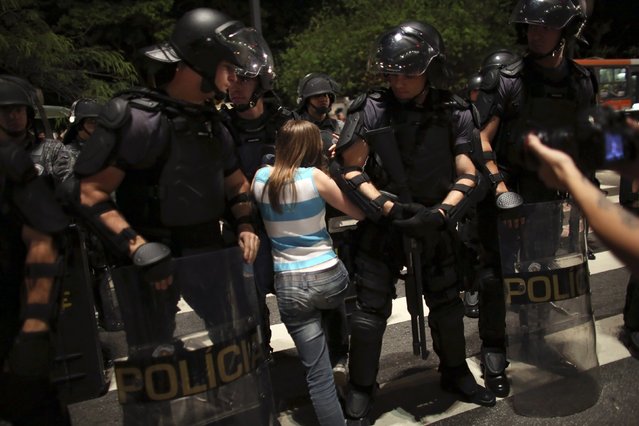 A demonstrator is blocked by riot police as she tries to cross the street during a protest against the 2014 World Cup in Sao Paulo June 26, 2014. The protesters demanded the release of two demonstrators who were detained by police during another protest earlier in the week. (Photo by Nacho Doce/Reuters) 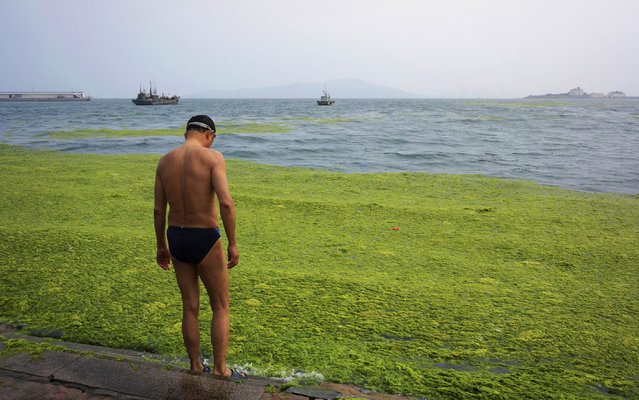