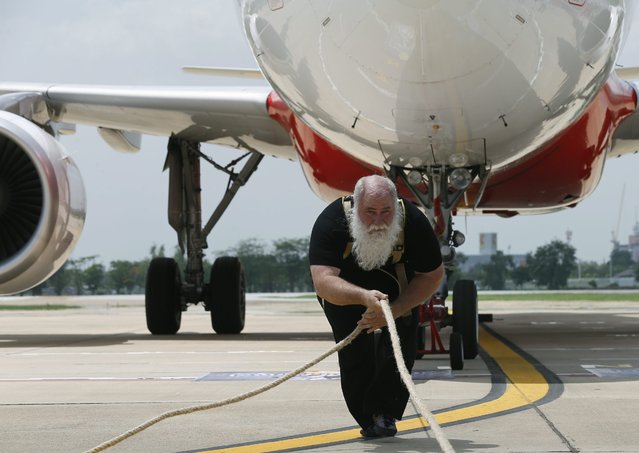 The strongest man in the world record attempt for the heaviest plane pulled, Canadian Kevin Fast, 51, pulls an Airbus A320-200 (180 seats) weighing 65 tonnes, a distance of 20 m. with a time of 0.53 minute, during a exclusive show at the Don Mueang International Airport in Bangkok, Thailand, 27 June 2014. Fast, who is the strongest guy in the world which recorded as a super-human, guaranteed by world records with pulled a CC-177 Globemaster III, weighing 188.83 tonnes, a distance of 8.8 m. at Canadian Forces Base in Canada on 17 September 2009. and many world records such as Guinness World Records, Ripley's Record and World Records set in Canada, USA, Italy and China. (Photo by Narong Sangnak/EPA) 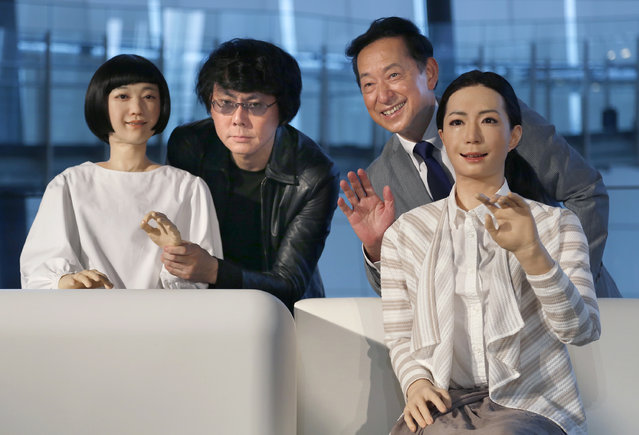 Japanese android expert Hiroshi Ishiguro, second left, and National Museum of Emerging Science and Innovation Miraikan Chief Executive Director Mamoru Mohri, second right, pose with a female-announcer robot called Otonaroid, right, and a girl robot called Kodomoroid during a press unveiling of the museum's new guides in Tokyo Tuesday, June 24, 2014. The latest creations from Osaka University Prof. Ishiguro are the Otonaroid, the Kodomoroid and Telenoid, a hairless mannequin head with pointed arms that serves as a cuddly companion. The robots with silicon skin and artificial muscles were shown to reporters at Miraikan museum on Tuesday. (Photo by Shizuo Kambayashi/AP Photo) 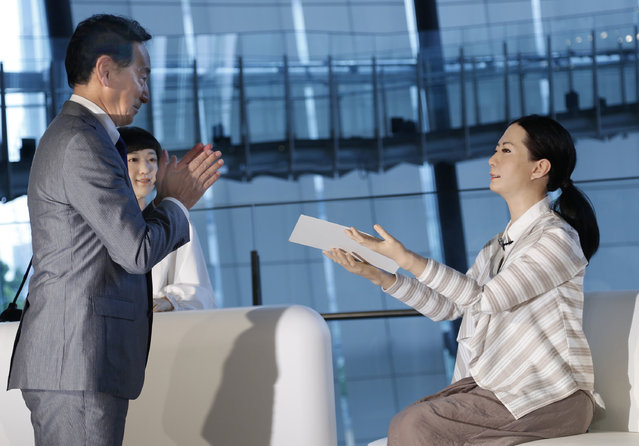 National Museum of Emerging Science and Innovation Miraikan Chief Executive Director Mamoru Mohri hands a female-announcer robot called Otonaroid a letter of appointment to assign as a guide at the museum as a girl robot called Kodomoroid, second left, looks on during a press event in Tokyo Tuesday, June 24, 2014. The latest creations from Japanese android expert Hiroshi Ishiguro are Otonaroid, Kodomoroid and Telenoid, a hairless mannequin head with pointed arms that serves as a cuddly companion. (Photo by Shizuo Kambayashi/AP Photo) 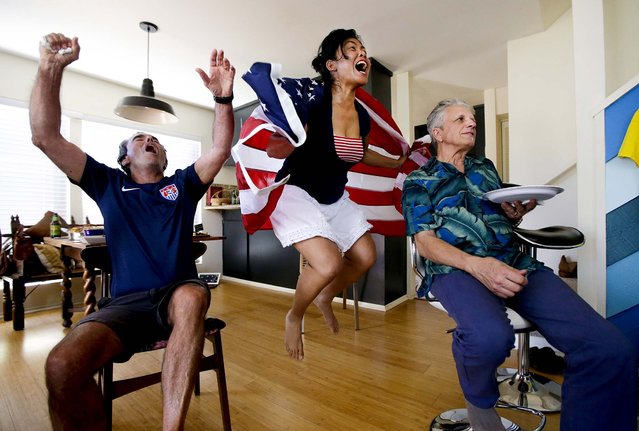 Ed Pollard, from left, Tina Termsomket and John Courte react after Portugal scored against USA during the first half while watching a televised group G World Cup soccer match during a watch party in Newport Beach, Calif., on June 22, 2014. (Photo by Chris Carlson/Associated Press) 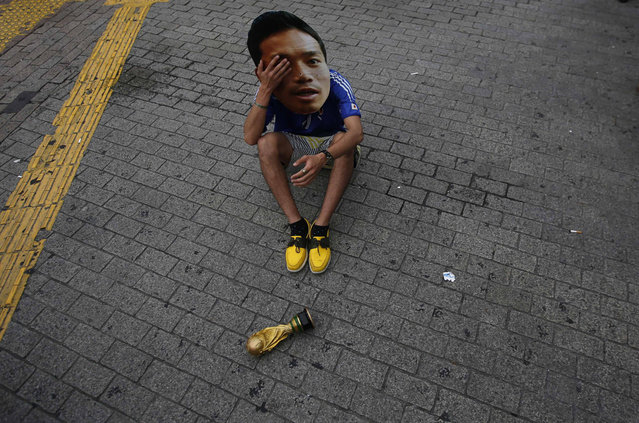 A soccer fan wearing mask of Japan's national soccer player Yuto Nagatomo reacts next to a mock World Cup trophy after Japan was defeated in their World Cup match against Colombia, at Shibuya shopping and amusement district in Tokyo June 25, 2014. (Photo by Issei Kato/Reuters) 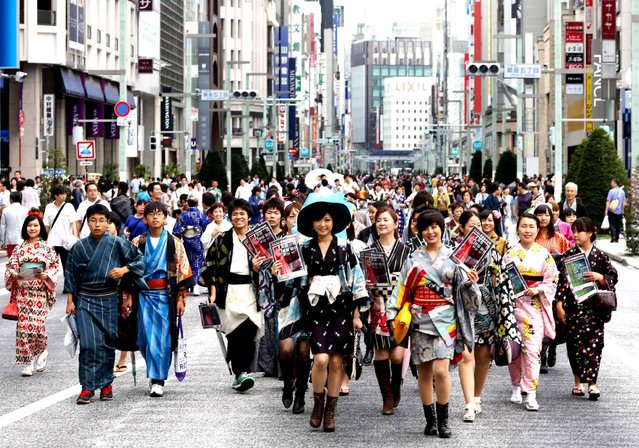 Kimono-clad high school students and local people from Isesaki city of Gunma Prefecture, march at Tokyo's Ginza dstrict on June 22, 2014, to commemorate the addition of the Tomioka Silk Mill and its related sites in the prefecture to the list of World Heritage sites. About 80 local people wore Meisen silk kimono, a special product of Isesaki, where Tajima Yahei Sericulture Farm, has been listed as one of the Tomioka Silk Mill related sites. (Photo by AFP Photo/The Yomiuri Shimbun) 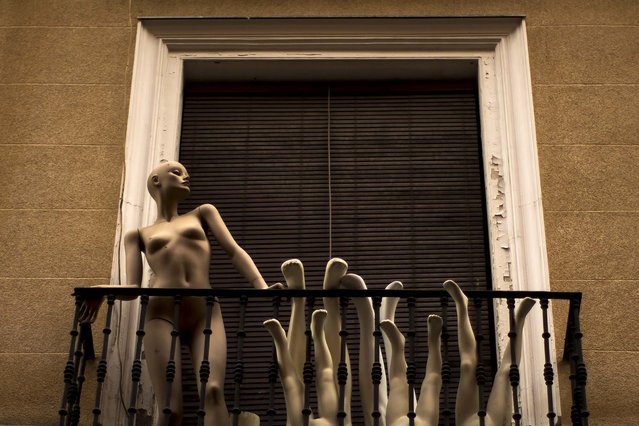 Mannequins stand on a balcony in the center of Madrid, Spain, on June 22, 2014. (Photo by Andres Kudacki/Associated Press) 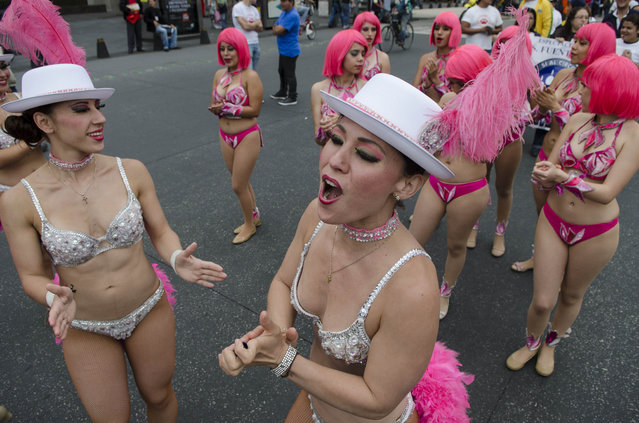 Karla Rosales, center, a performer in the Fuentes Gasca Brothers Circus, leads a chant during a protest against approved legislation that bans the use of animals in circuses, in Mexico City, Thursday, June 26, 2014. Circus performers fear that without their animals they will not survive because they believe people won�t want to come to only see the clowns, the acrobats and trapeze artists. (Photo by Sean Havey/AP Photo) 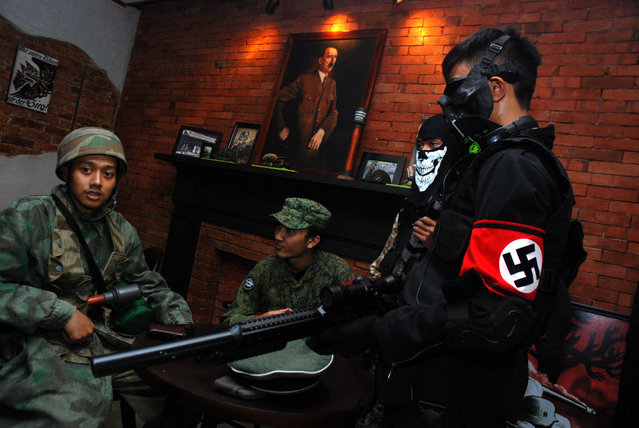 Indonesian customers come in World War II motif military uniforms, one bearing a Nazi's swastika insignia while a portrait of Adolf Hitler hangs in the background, at the reopened SoldatenKaffee in Bandung city, western Java island on June 21, 2014. The Nazi-theme cafe in Indonesia that sparked international outrage and closed shop, has reopened with its walls still bearing swastikas and a large painting of Adolf Hitler. (Photo by Timur Matahari/AFP Photo) 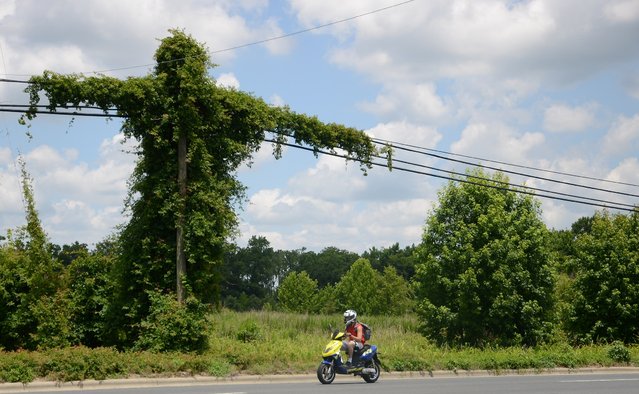 Large trumpet vines spread across electrical lines next to a highway in Kinston, N.C., on June 23, 2014. (Photo by Janet S. Carter/Kinston Free Press via AP Photo) 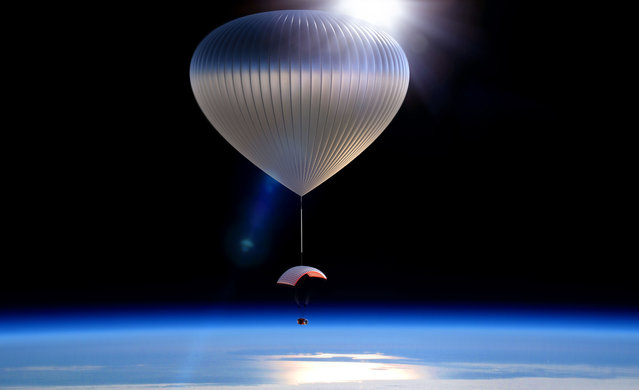 This artist rendering provided by World View Enterprises shows the World View Voyager balloon carrying a pressurized space capsule that will be transported to the edge of space. The Arizona company says it has successfully completed the first scale test flight of a high-altitude balloon and capsule being developed to take tourists to the edge of space. World View Enterprises of Tucson said Tuesday June 24, 2014 that it launched the flight last week from Roswell, NM. CEO Jane Poynter says the system broke the world record for highest parafoil flight, lifting a payload one-tenth of what is planned for passenger flight to 120,000 feet. (Photo by AP Photo/World View Enterprises) 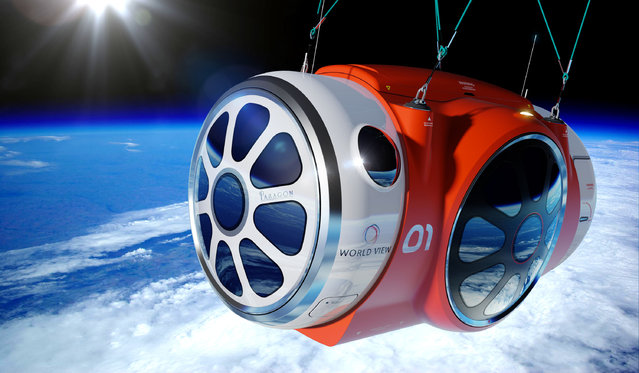 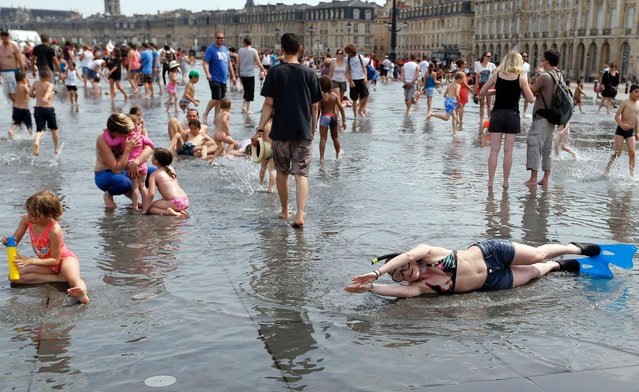 People enjoy the good weather during a warm summer day on the banks of the Garonne and the place de la Bourse in Bordeaux centre, southwestern France June 22, 2014. (Photo by Regis Duvignau/Reuters) 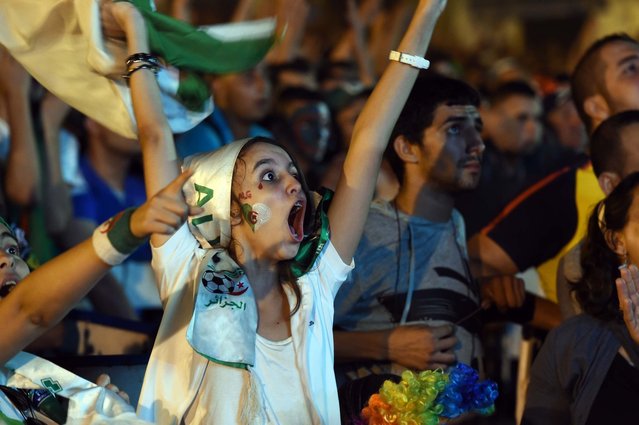 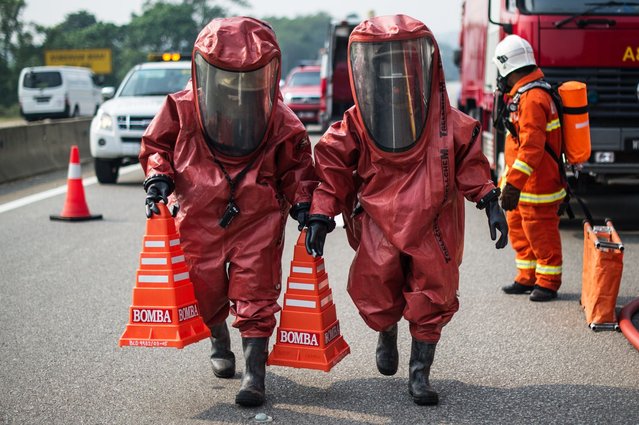 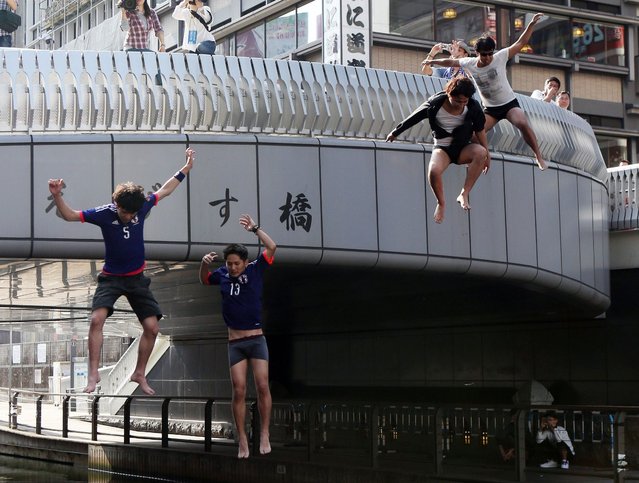 Japanese football supporters jump into a river in Osaka on June 25, 2014 after Japan was defeated by Colombia at the FIFA World Cup group C match in Brazil. (Photo by AFP Photo/JIJI Press) 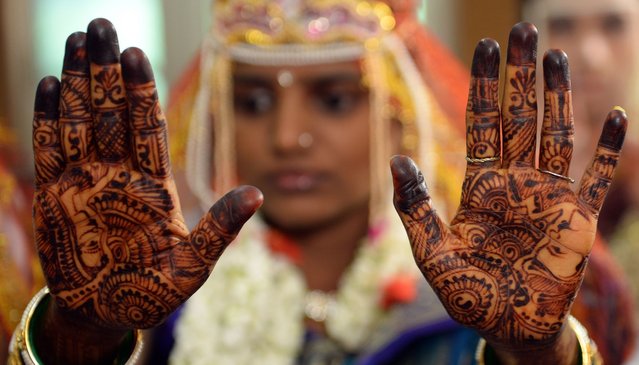 An Indian bride shows her mehendi (henna)-decorated hands as she waits her turn to be wedded at a multi-faith mass wedding in Mumbai on June 22, 2014. Over 50 underprivileged couples from different communities were wedded according to the traditions of their faith on the occassion. Mass marriages generally organised by social organisations to cut ceremony costs are common in India with its billion plus population where the custom of dowry and expensive gifts from the bride's family still prevails among certain segments of society. (Photo by Indranil Mukherjee/AFP Photo) 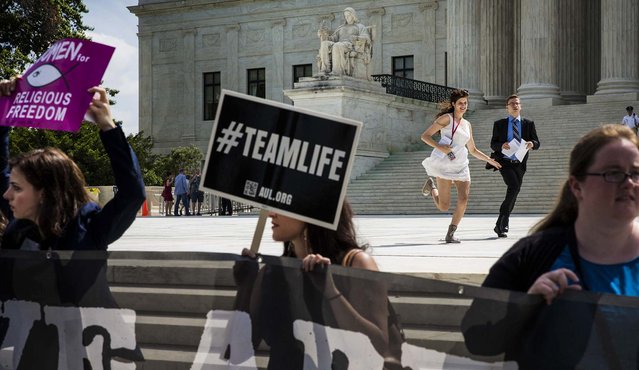 Reporters run past anti-abortion demonstrators outside of the Supreme Court with a copy of the decision striking down abortion clinic buffer zones, in Washington, on June 25, 2014. The Supreme Court on Thursday unanimously struck down a Massachusetts law that barred protests near abortion clinics. (Photo by Stephen Crowley/The New York Times) 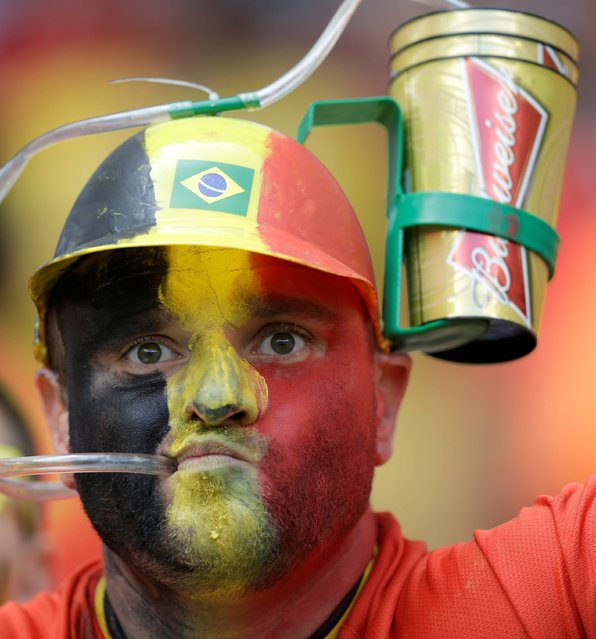 A Belgian fan drinks from his helmet cup before the group H World Cup soccer match between Belgium and Russia at the Maracana Stadium in Rio de Janeiro, Brazil, Sunday, June 22, 2014. (Photo by Natacha Pisarenko/AP Photo) 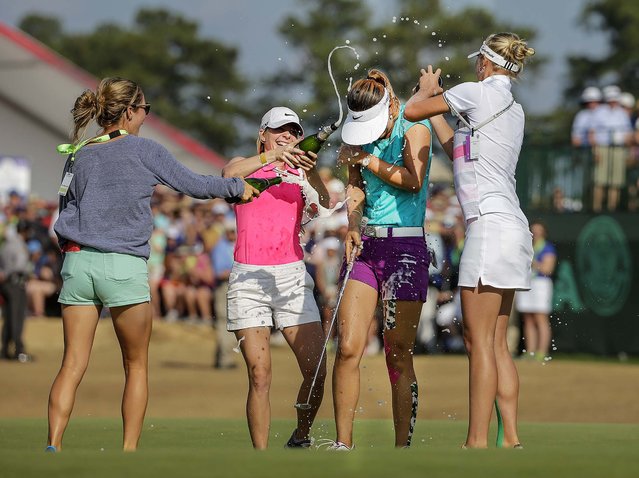 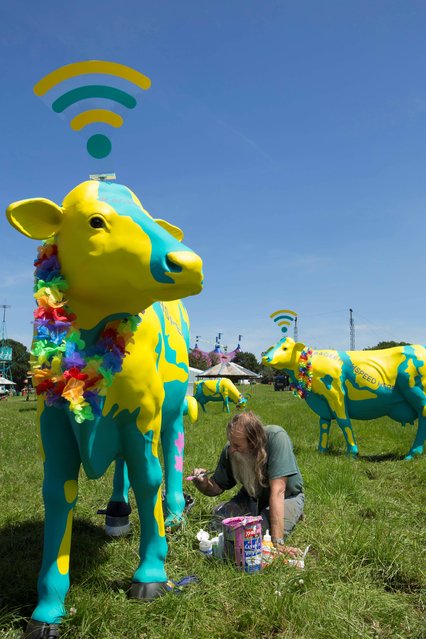 Undated handout photo of life-size fibreglass cows decorated by artist Hank Kruger, modelled on Worthy Farm's famous dairy herd, which have been converted into 4G wifi hotspots to benefit festival goers at this year's Glastonbury. The cows allow revellers to log on and upload pictures and videos at key points around the Somerset farm. (Photo by Nathan Gallagher/PA Wire) 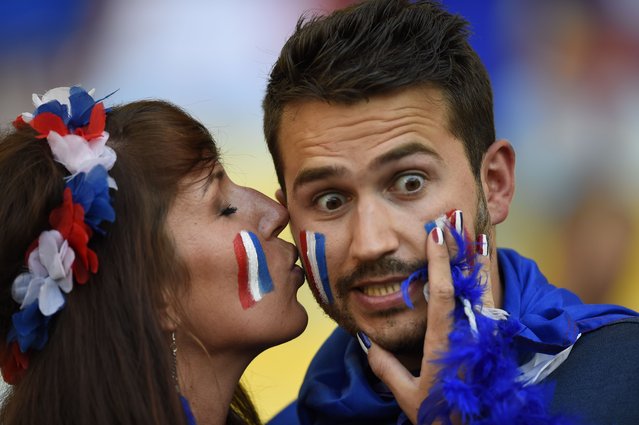 French supporters kiss prior to the start of a Group E football match between Ecuador and France at the Maracana Stadium in Rio de Janeiro during the 2014 FIFA World Cup on June 25, 2014. (Photo by Odd Andersen/AFP Photo) 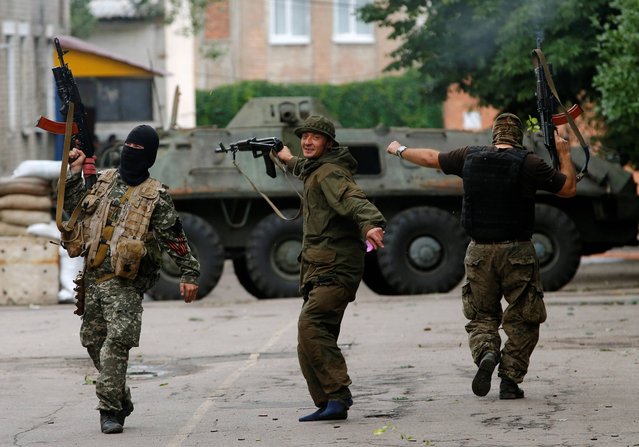 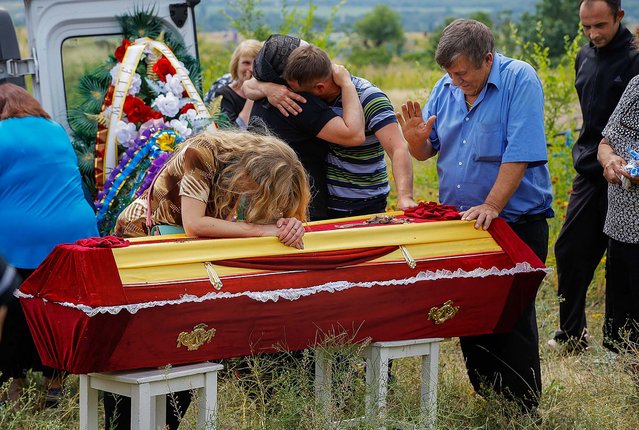 Relatives grieve at the coffin of pro-Russian fighter Dmitri Bystriukov, who was killed during a mortar attack, in the city of Krasnodon in Luhansk eastern Ukraine, on June 26, 2014. More than 300 people have been killed in eastern Ukraine in the past weeks as pro-Russian insurgents fought with government forces. (Photo by Dmitry Lovetsky/Associated Press) 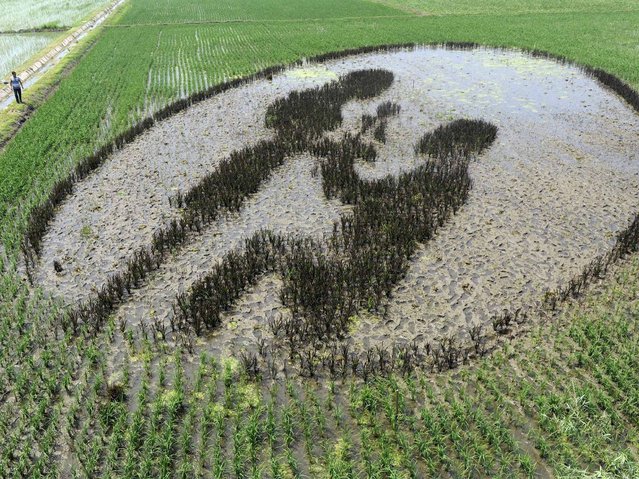 A man walks by a mural made of rice plants at a paddy field in Shenyang, Liaoning province, 23 June 2014. (Photo by Reuters/Stringer) 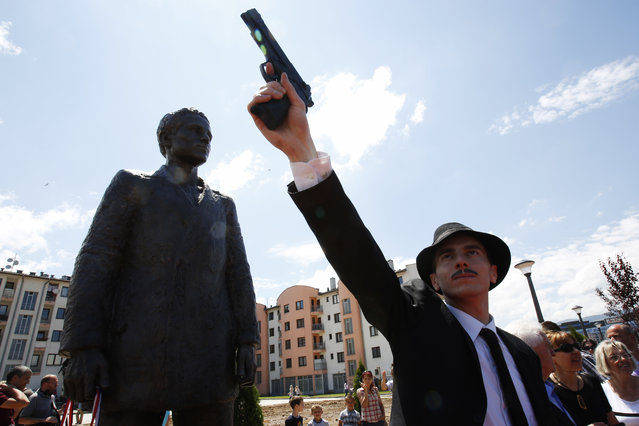 Bosnian actor Jovan Mojsilovic poses with a plastic replica gun during ceremony of unveiling statue of Gavrilo Princip in Istocno Sarajevo, on Friday, June 27, 2014. Marking the centennial of the beginning of World War I in their own way, Bosnian Serbs have unveiled a monument of Gavrilo Princip in the Eastern part of Sarajevo to the man who ignited the war by assassinating the Austro-Hungarian crown prince on June 28, 1914. (Photo by Amel Emric/AP Photo)
Edit Del
28 Jun 2014 13:44:00, post received 0 comments
Publication archive:
←   →
Popular tags:
All tags
Last searches: