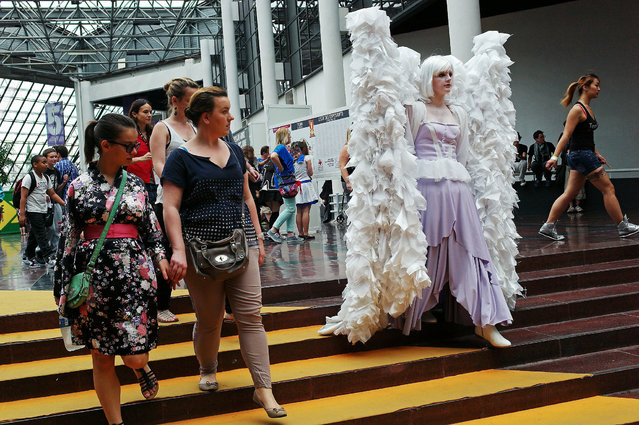 A woman dressed like a manga character, right, attends the 15th edition of the “Japan Expo” exhibition, in Villepinte, north of Paris, Friday, July 4, 2014. The event, which runs from July 2 to 6, is devoted to Japanese culture and entertainment. (Photo by Thibault Camus/AP Photo) 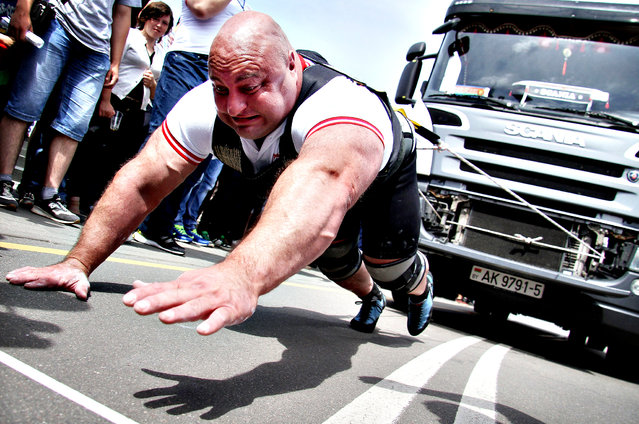 An athlete pulls a 15-tonne truck during a Truck-Pull event marking the upcoming Independence Day in the Belarus capital Minsk, on July 3, 2014. The former Soviet nation celebrates its Independence Day on July 3 in memory of the end of Belarus occupation by Nazi Germany troops during the Red Army main summer offensive in 1944. (Photo by Sergei Gapon/AFP Photo) 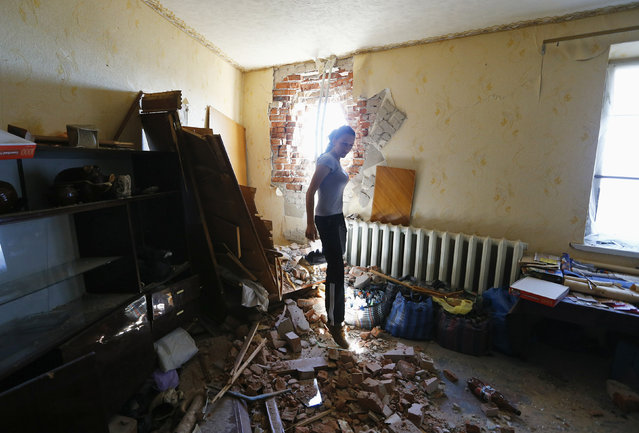 Local resident Tatyana Markova walks inside a house damaged by shelling in the Ukrainian eastern city of Slaviansk July 1, 2014. (Photo by Shamil Zhumatov/Reuters) 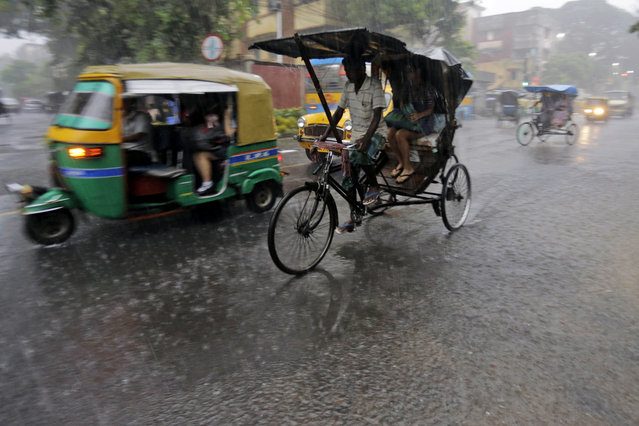 A rickshaw driver transports a passenger in the rain in Kolkata, India, on Jule 2, 2014. Normal traffic was affected in several areas of the city because of overnight rainfall that caused water-logging, according to news reports. (Photo by Bikas Das/Associated Press) 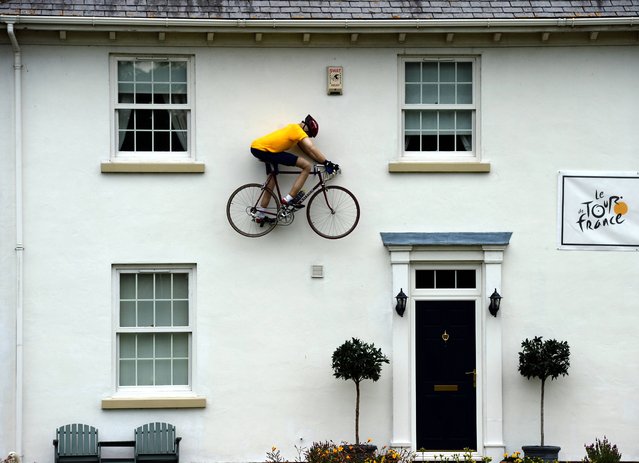 A model supporting the Tour de France on a house in the village of North Stainley which the riders will pass on Stage 1 between Leeds and Harrogate on July 3, 2014. (Photo by John Giles/PA Wire) 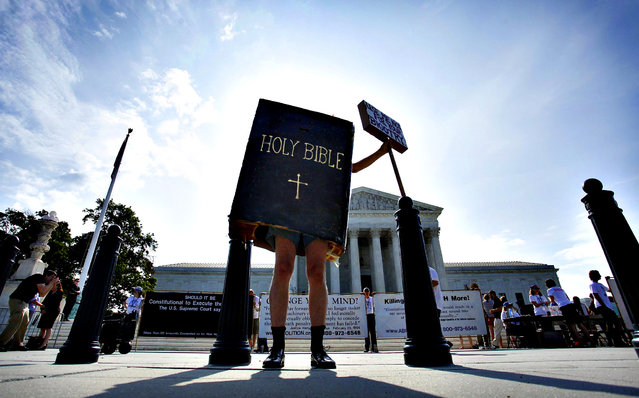 A protester dressed as a copy of the Bible joins groups demonstrating outside the U.S. Supreme Court in Washington June 30, 2014. The U.S. Supreme Court on Monday ruled that business owners can object on religious grounds to a provision of U.S. President Barack Obama's healthcare law that requires closely held companies to provide health insurance that covers birth control. (Photo by Jonathan Ernst/Reuters) 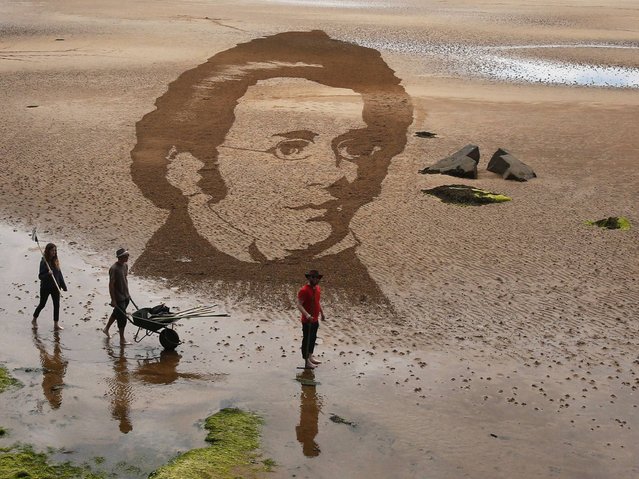 (L to R) Claire Jamieson, Tom Bolland and Jamie Wardley from sand sculpture company Sand in Your Eye, creates a sculpture of Franz Schubert on Elie Beach in Scotland, on June 30, 2014. (Photo by Danny Lawson/PA Wire) 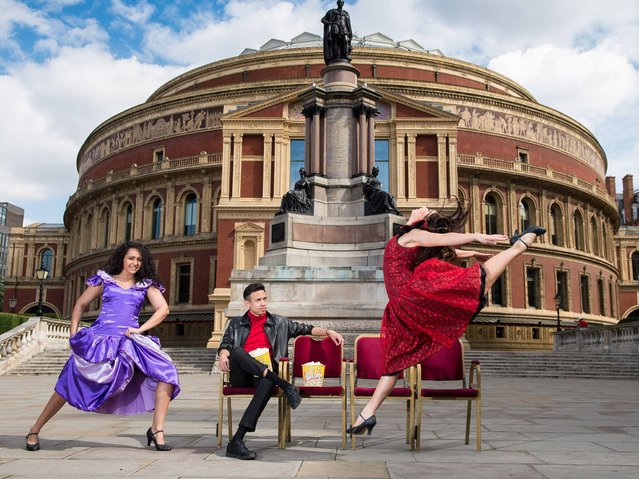 Dancers leap in the air outside the Royal Albert Hall as the venue gears up for “West Side Story-Film With Live Orchestra” on June 30, 2014 in London, England. West Side Story, the classic film accompanied by the Royal Philharmonic Concert Orchestra playing live on stage runs between Friday 4th July to Sunday 6th July with 25,000 Shark and Jet fans descending on the iconic venue. (Photo by Ian Gavan/Getty Images for Royal Albert Hall) 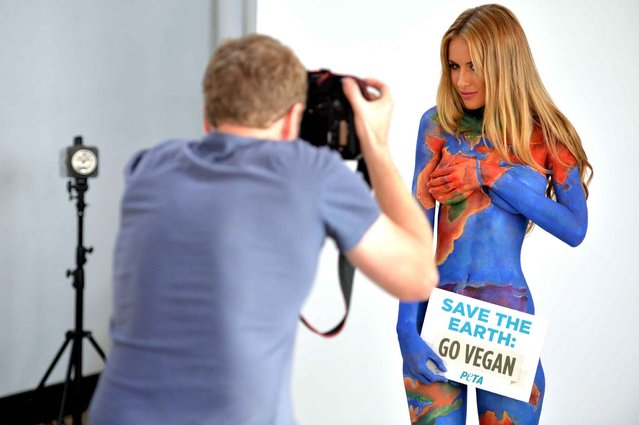 Model Renee Somerfield is photographed with her body painted as the earth with a sign reading “Save the Earth, Go Vegan” for a new advertisement by People for the Ethical Treatment of Animals (PETA) in Sydney on July 3, 2014. PETA is telling the world to stop eating meat and dairy products and switch to a healthy and animal friendly vegan diet. (Photo by Peter Parks/AFP Photo) 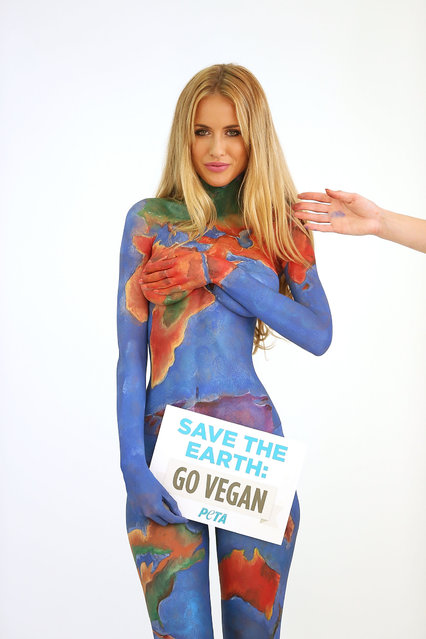 Model Renee Somerfield poses during the filming for an ad made by People for the Ethical Treatment of Animals (PETA) at San Telmo Studio in Sydney, Australia on Jule 3, 2014. (Photo by Mark Metcalfe/Getty Images) 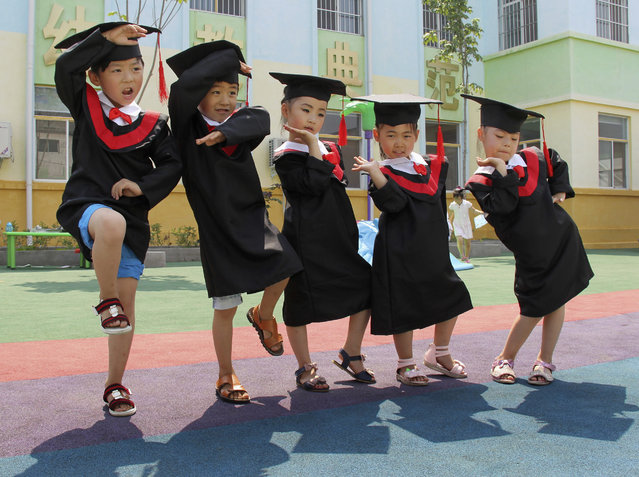 Children in gowns and mortarboards pose for pictures during their kindergarten graduation ceremony, in Wenxian county, Henan province July 2, 2014. (Photo by Reuters/Stringer) 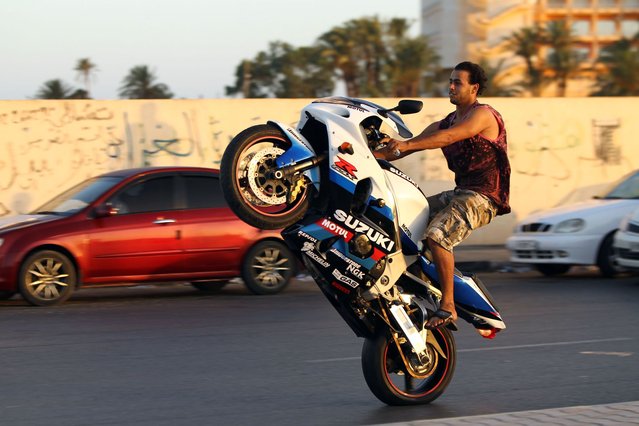 A Libyan man performs a wheelie on a road as youth gather to show-off their riding skills early on July 4, 2014, in the eastern city of Benghazi. (Photo by Abdullah Doma/AFP Photo) 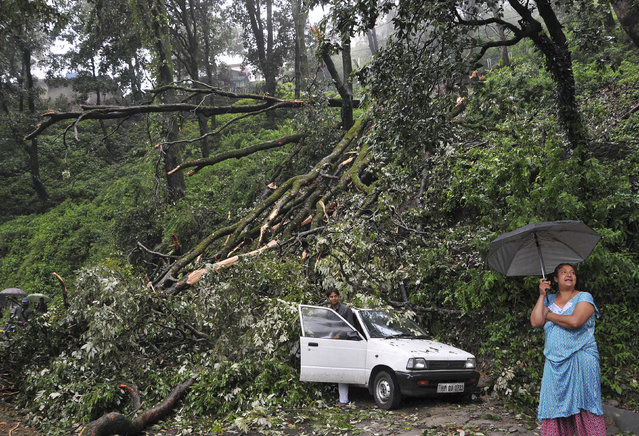 A woman (R) stands near a car which was damaged by a tree that fell after heavy rains and strong winds in the northern Indian hill town of Shimla July 2, 2014. Monsoon rains have revived in central and northern parts of India known for soybean and sugarcane cultivation, a government official said on Wednesday, but warned the country is still expected to have below-average monsoon this year. (Photo by Reuters/Stringer) 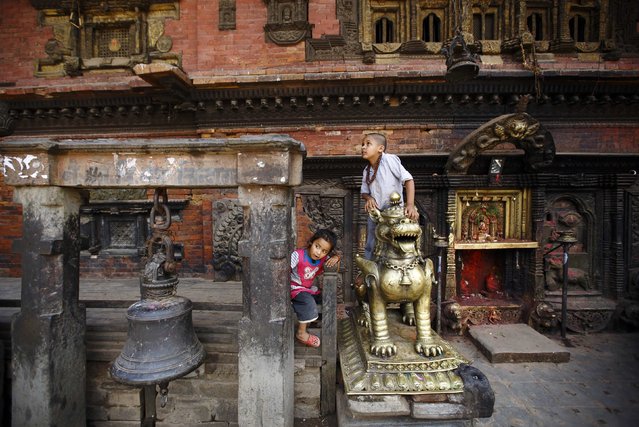 Children play outside a temple along the street in the ancient city of Bhaktapur near Nepal's capital Kathmandu July 2, 2014. (Photo by Navesh Chitrakar/Reuters) 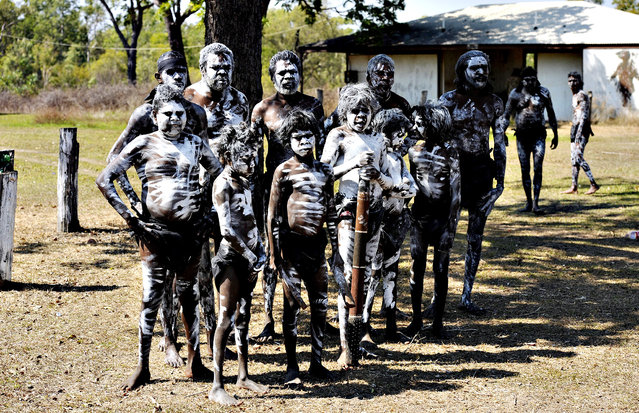 Traditional dancers wait to perform before the swearing-in of members of the new West Daly Regional council in the aboriginal community of Peppimenarti, about 320km south-west of Darwin, Australia, 04 July 2014. The Northern Territory (NT) government is dismantling the Supershire network set up by the previous Labor government in favour of 63 local council to better represent local communities. (Photo by Dan Peled/EPA) 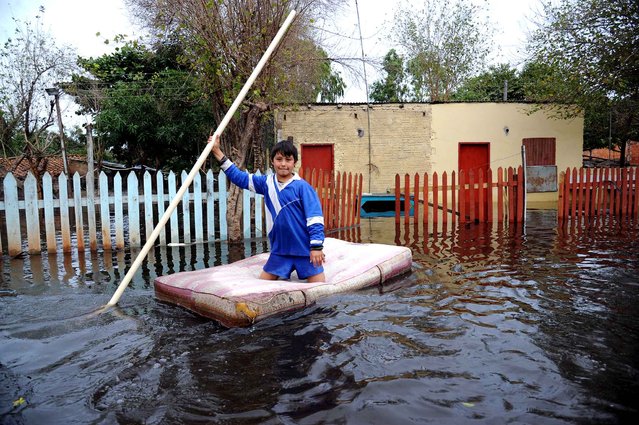 A child navigates on a makeshift raft in a flooded neighborhood of Asuncion, on July 2, 2014. Heavy rains have caused flooding across the country, killing at least one person and affecting some 30,000 familes in the Paraguyan capital and 200.000 across the country, according to official sources. (Photo by Norberto Duarte/AFP Photo) 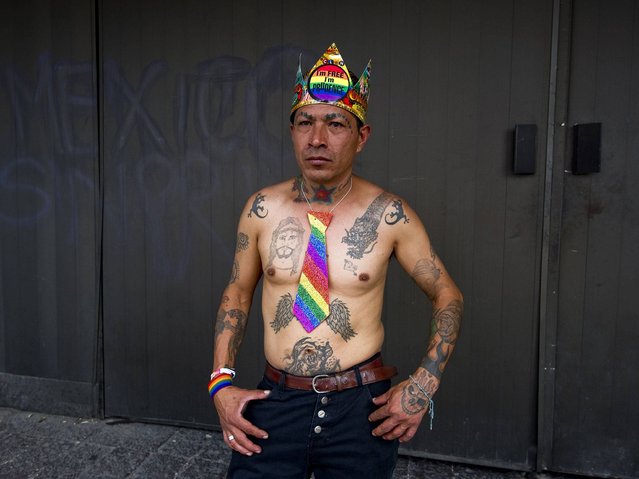 A man participates in the Gay Pride Parade in Mexico City, on June 28, 2014. (Photo by Alfredo Estrella/AFP Photo) 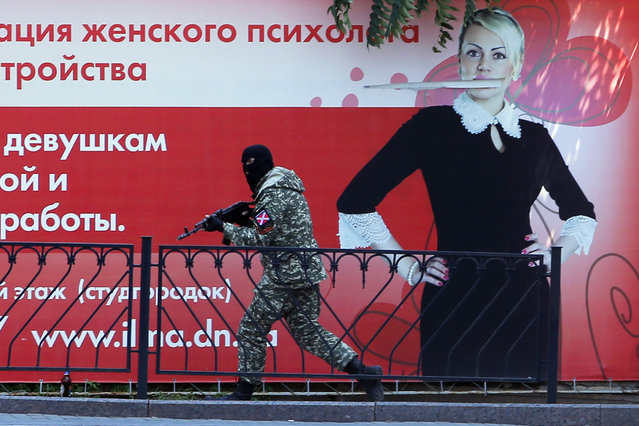 A pro-Russian fighter runs past a huge poster during fighting near a regional police department in downtown Donetsk, eastern Ukraine, Tuesday, July 1, 2014. Ukraine renewed its attacks against armed pro-Russian separatists Tuesday after the president called off a unilateral cease-fire, carrying out air and artillery strikes against rebel positions in eastern Ukraine. (Photo by Dmitry Lovetsky/AP Photo) 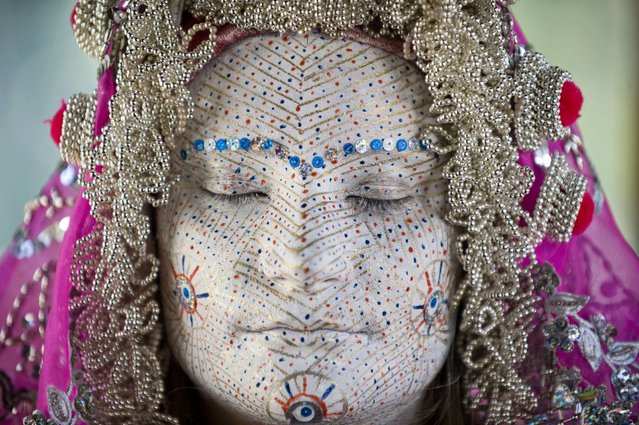 Kosovar Bosnian woman Arleta Sahiti poses after her face was painted by a woman during a presentation of the traditional wedding ceremony of Bosnian women from Zhupa region at the Ethnological Museum in Pristina on July 2, 2014. As part of the tradition, old ladies prepare young brides, painting their faces in many layers of colors. The golden circles symbolize the cycles of life. (Photo by Armend Nimani/AFP Photo) 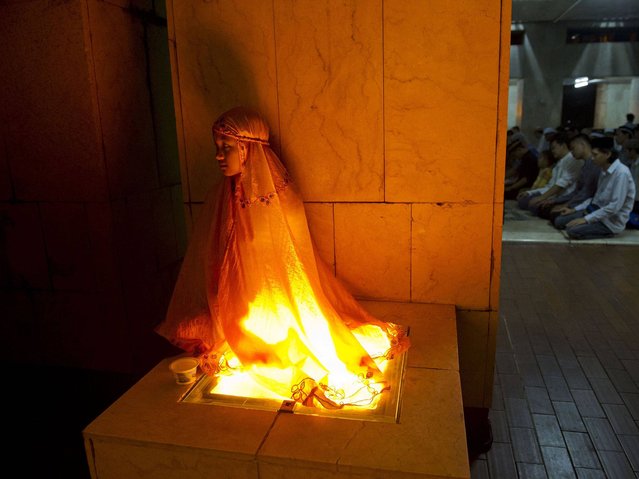 An Indonesian girl sits by a lamp at the Istiqlal mosque as men pray inside, in Jakarta during the “tarawih” prayer marking the eve before the start of Islam's holy month of Ramadan on June 28, 2014. Muslims around the world celebrate Ramadan, the holiest month in the Islamic calender, in which they abstain from eating, drinking and s*x from sunrise to sunset. (Photo by Romeo Gacad/AFP Photo) 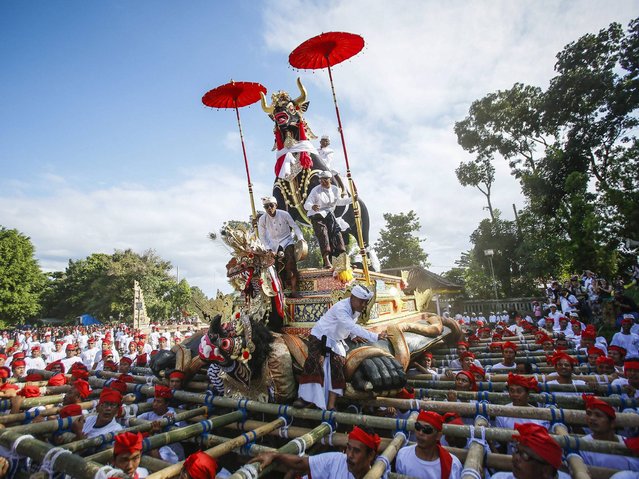 Balinese transport a sarcophagus in the form of a bull to a cemetary during a grand royal cremation of the Klungkung royal family member, Ida Dewa Agung Istri Putra, in Klungkung, Bali, Indonesia, 29 Juni 2014. Cremation is an essential rite of passage for Balinese Hindus, as it is considered a means of releasing the soul from the body so that it can be reincarnated. (Photo by Made Nagi/EPA) 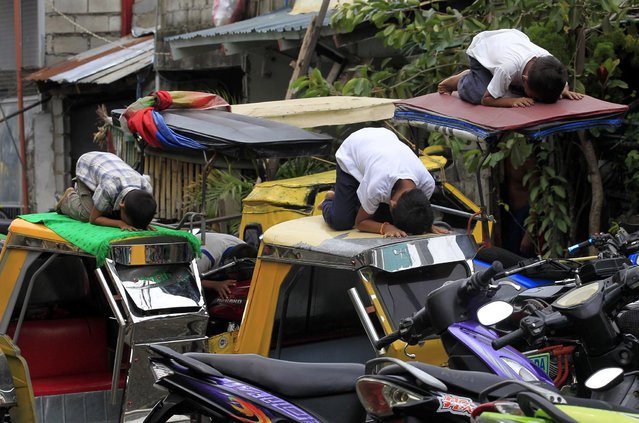 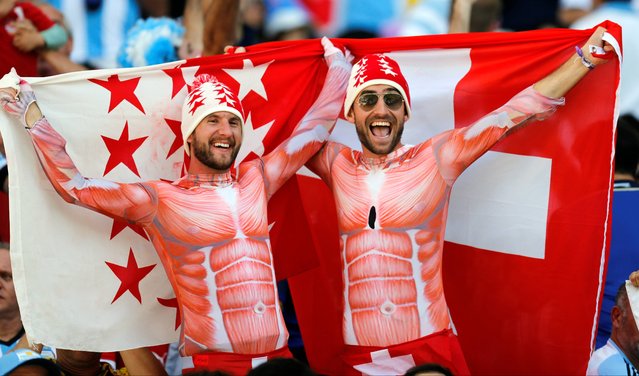