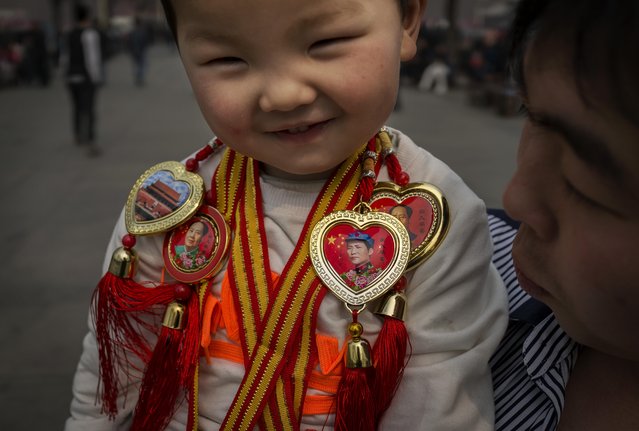 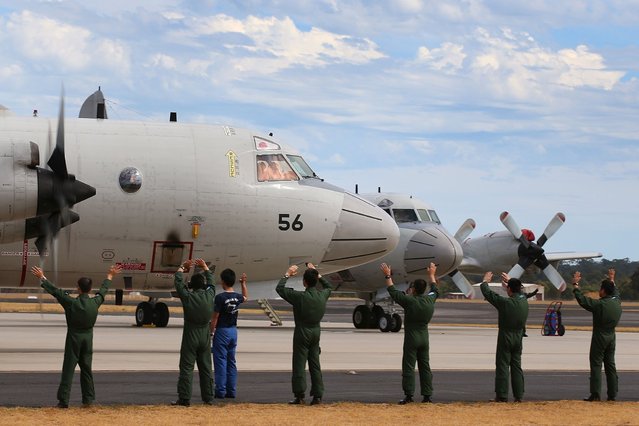 Japanese Maritime Self Defence Force personnel wave farewell to a P-3C Orion as it taxis from the RAAF base Pearce in Bullbrook, 35 kms north of Perth on March 24, 2014 to depart to search for missing Malaysia Airlines flight MH370 over the southern Indian Ocean. Ships and planes from several nations swarmed over the southern Indian Ocean on March 24 as mounting evidence of floating debris energised the search for Malaysia's missing passenger jet. (Photo by Paul Kane /AFP Photo) 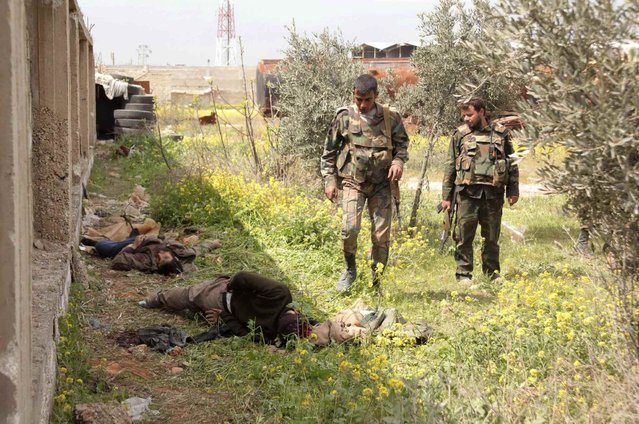 Syrian army soldiers loyal to Syria's President Bashar al-Assad inspect a dead body, which according to them was a member of the “Free Syrian Army”, in al-Maamel area in Aleppo's countryside, after claiming to have advanced and regained control of it, on March 24, 2014. (Photo by Jorge Ourfalian/Reuters) 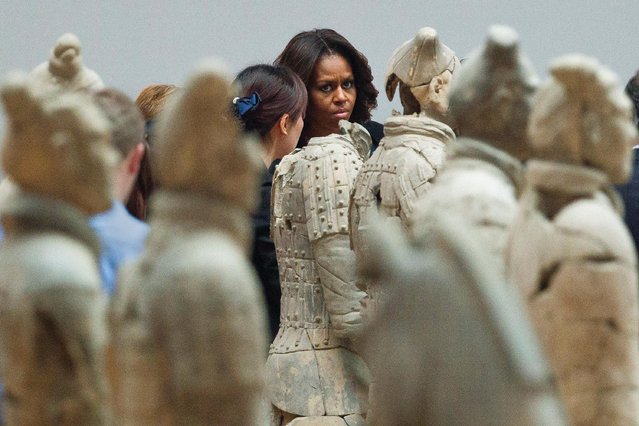 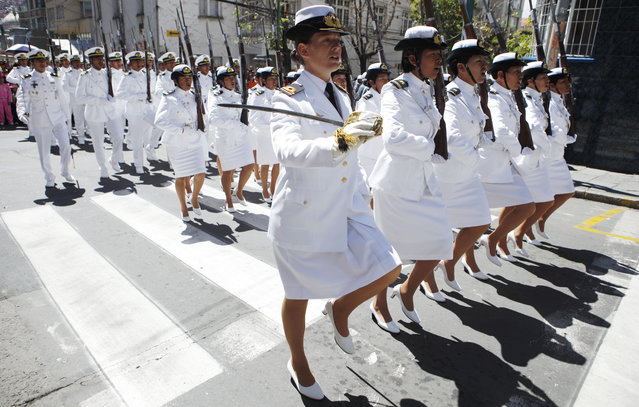 Naval officers march in the parade honoring Abaroa, who died in the 1879-1884 War of the Pacific, as part of Sea Day celebrations in La Paz, Bolivia, on March 23, 2014. Bolivia lost its access to the Pacific due to Chile's victory in the war that gave Chile mineral-rich territories once held by Peru and Boliva. (Photo by Juan Karita/Associated Press) 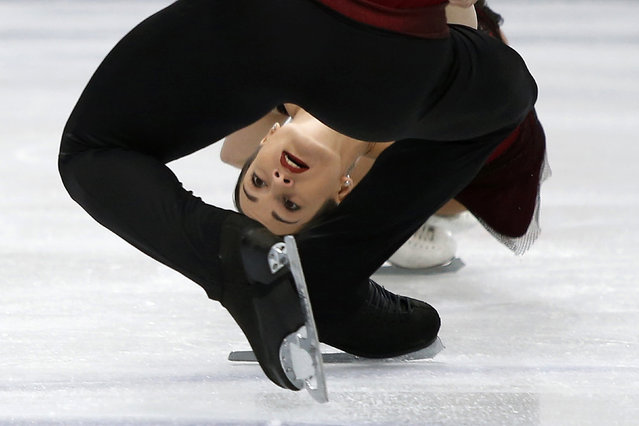 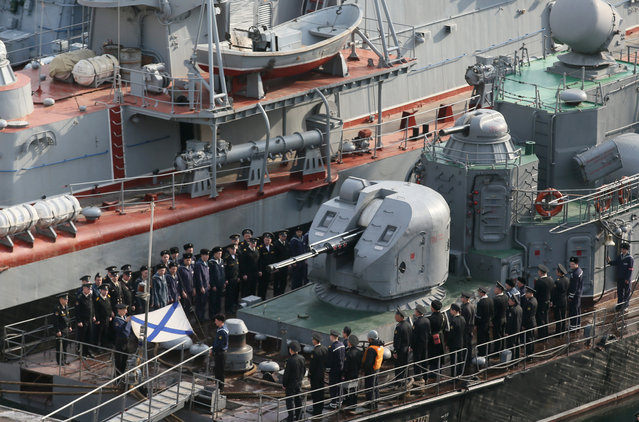 Russian navy sailors stand still during a flag-raising ceremony at the deck of “Suzdalets” (IPC-118) – small ASW ship project 1124 M moored in the bay of the Crimean city of Sevastopol, Ukraine, March 26, 2014. The previous day, Russian President Putin ordered Russian administration be put into place in newly annexed Crimea by the end of the week. The decree came a week after a referendum in Crimea, in which 95 percent of voters endorsed joining Russia, and two days after Putin signed a treaty sealing Crimea's accession to Russia. (Photo by Sergei Ilnitsky/EPA) 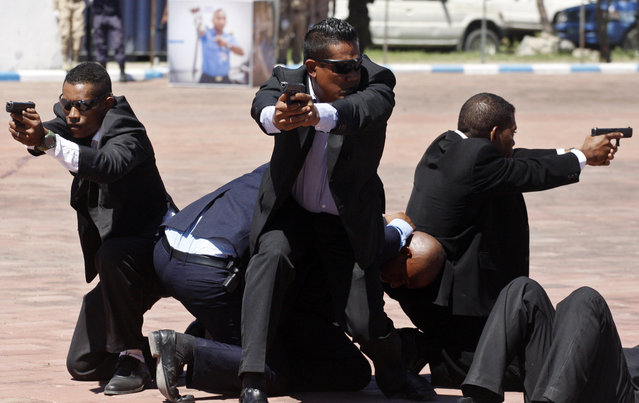 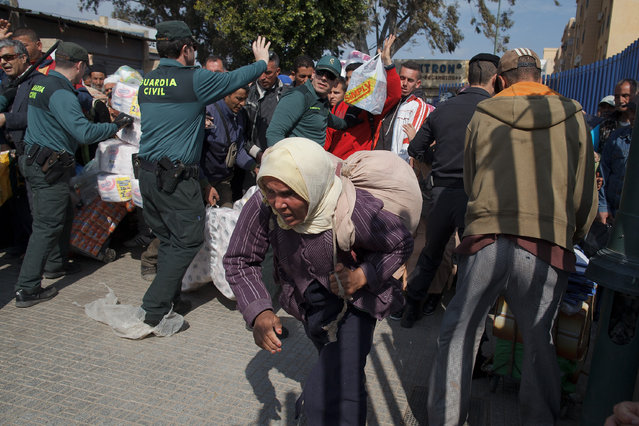 Members of Guardia Civil let a mule women pass as they hold back a crowd people trying to cross through the Beni Enzar border point to Morocco once the gates opened again on March 22, 2014 in Melilla, Spain. Police closed the Beni Enzar border point to Morocco for two hours when tens of Syrian would-be immigrants tried to force their entry into Spain. Around 500 would-be immigrants entered the Spanish enclave of Melilla on March 17 from Morocco, forcing the Temporary Immigration Centre (CETI) to shelter around four times its capacity, which is 480 people. The army has placed temporary tents outside the Centre to make space. (Photo by Pablo Blazquez Dominguez/Getty Images) 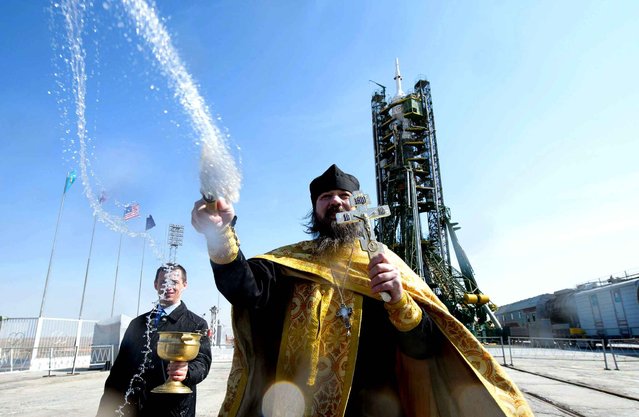 An Orthodox priest baptizes the “Soyuz” rocket at the Baikonur space center in Kazakhstan on March 24, 2014. (Photo by Joel Kowsky/NEWSCOM/SIPA Press) 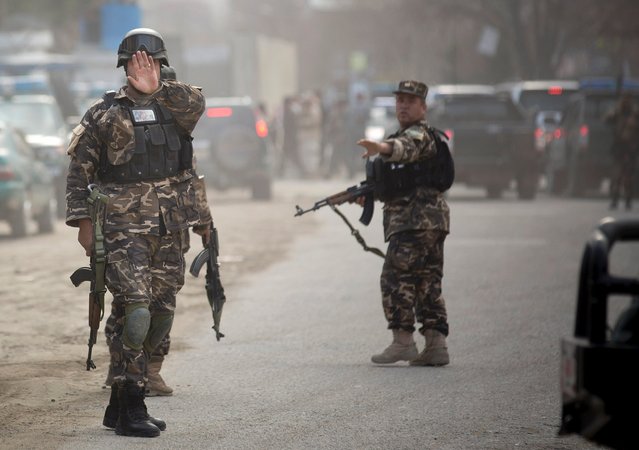 Commandos with Afghanistan's intelligence agency arrive after four suicide bombers armed with assault rifles and hand grenades attacked an “office of foreigners” in a southwestern neighborhood of Kabul, March 28, 2014. A Taliban spokesman said insurgents attacked a “guest house of foreigners and a church of foreigners”. (Photo by Anja Niedringhaus/AP Photo) 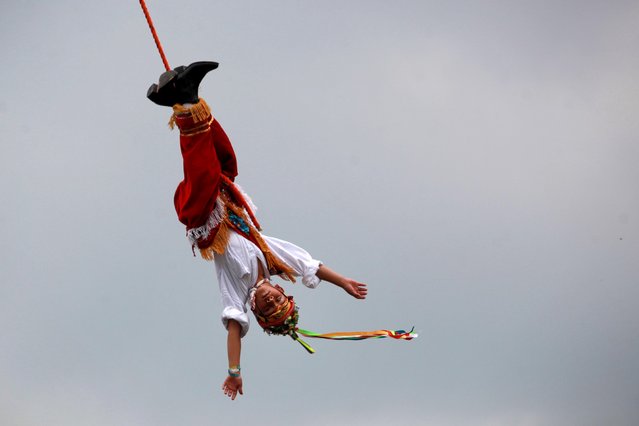 A young Papantla Flyer performs at the Takilhsukut park, as part of the Cumbre Tajin 2014 music festival celebrations, in Papantla, Mexico, March 22, 2014. The Papantla Flyers is an ancient religious ceremony from central Mexico that is now mostly performed for tourists. (Photo by Felix Marquez/AP Photo) 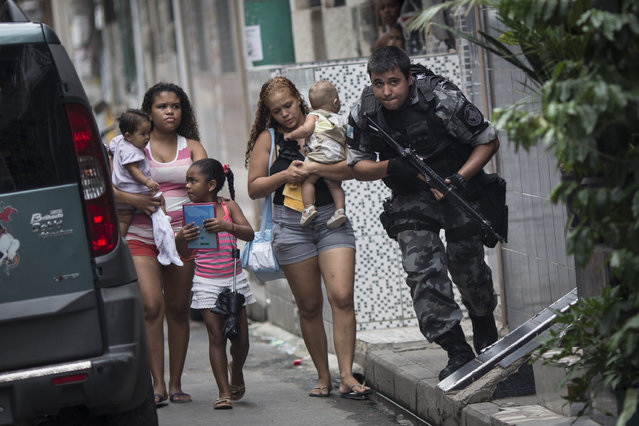 Upon hearing gun shots, a military police officer runs for cover, past residents, during an operation in the Mare slum complex, ahead of its “pacification”, in Rio de Janeiro, Brazil, Tuesday, March 25, 2014. Elite federal police and army troops will be sent to the city to help quell a wave of violence in so-called “pacified” slums. Recent attacks on police bases in the favelas is raising concerns about an ambitious security program that began in 2008, in part to secure the city ahead of this year's World Cup and the 2016 Olympics. (Photo by Felipe Dana/AP Photo) 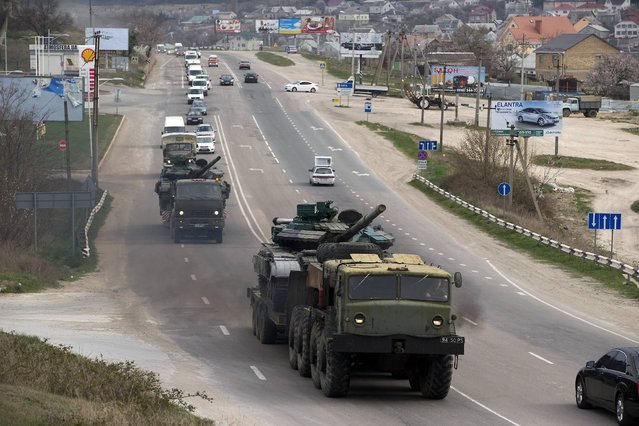 Ukrainian tanks are transported from their base in Perevalne, outside Simferopol, Crimea, Wednesday, March 26, 2014. Ukraine has started withdrawing its troops and weapons from Crimea, now controlled by Russia. (Photo by Pavel Golovkin/AP Photo) 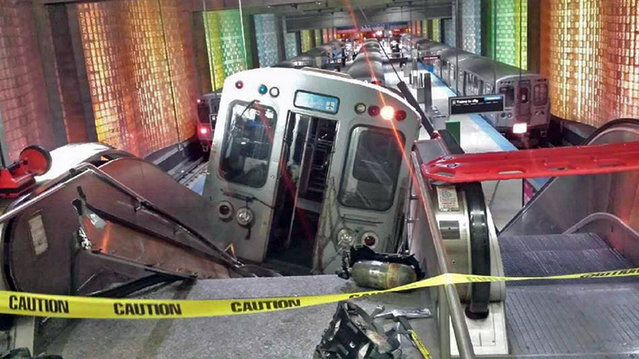 A Chicago Transit Authority train car rests on an escalator at the O'Hare Airport station after it derailed early Monday, March 24, 2014, in Chicago. More than 30 people were injured after the train “climbed over the last stop, jumped up on the sidewalk and then went up the stairs and escalator”, according to Chicago Fire Commissioner Jose Santiago. (Photo by Kenneth Webster/AP Photo/NBC Chicago) 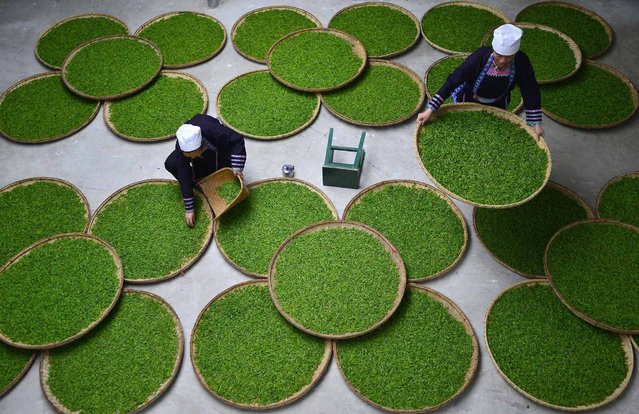 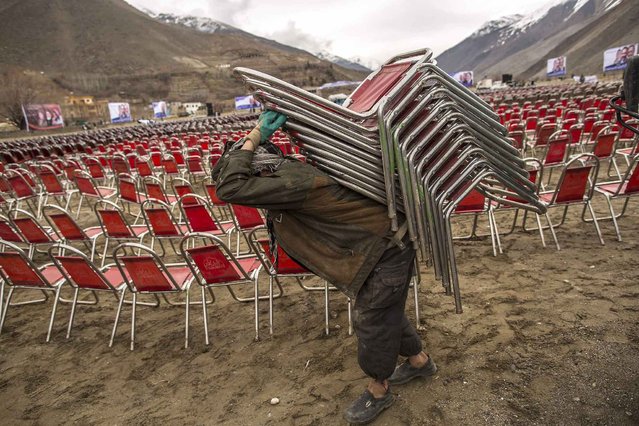 A supporter of Afghan presidential candidate Zalmai Rassoul carries chairs as he prepares for an election rally in Panshir, northern Afghanistan, March 28, 2014. (Photo by Zohra Bensemra/Reuters) 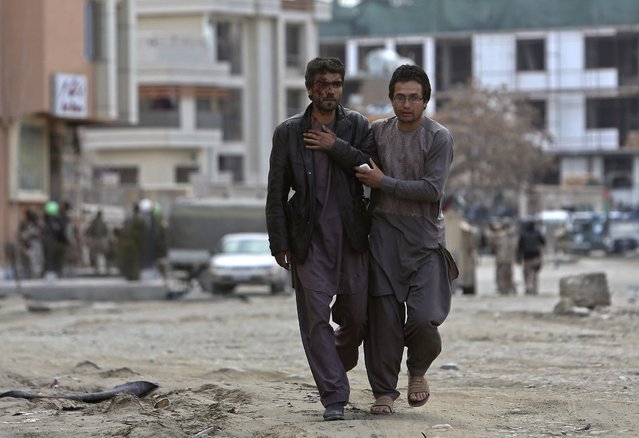 An Afghan man helps an injured man at the site of an attack by Taliban insurgents in Kabul March, 28, 2014. A group of Afghan Taliban insurgents forced their way into a guesthouse used by foreigners in an upscale residential part of the capital Kabul on Friday, police said. (Photo by Omar Sobhani/Reuters) 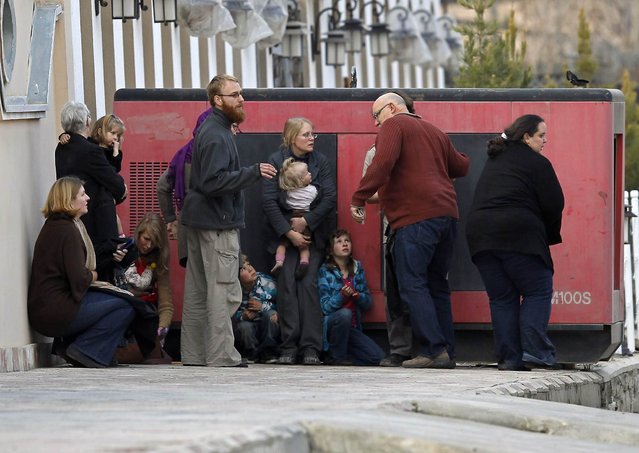 Foreigners evecauated by police from the site of an attack in Kabul are seen March 28, 2014. (Photo by Omar Sobhani/Reuters) 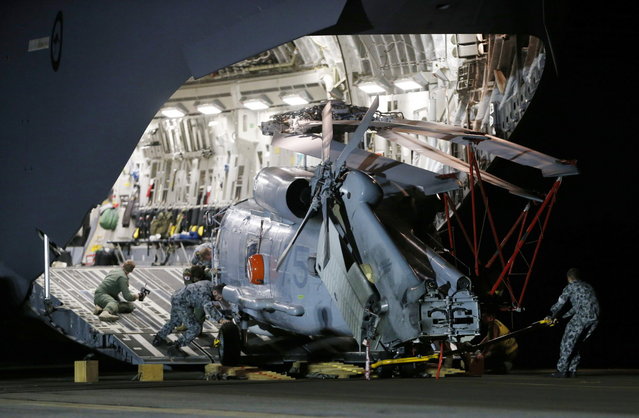 Crew on an Australian Air Force C-17 Globemaster unload an Australian Navy Seahawk helicopter at the RAAF Base Pearce near Perth, March 28, 2014. The helicopter will be used in the search for Malaysian Airlines flight MH370 in the southern Indian Ocean. (Photo by Jason Reed/Reuters) 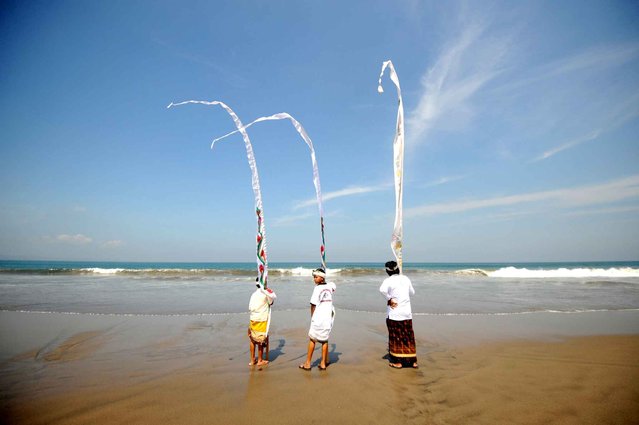 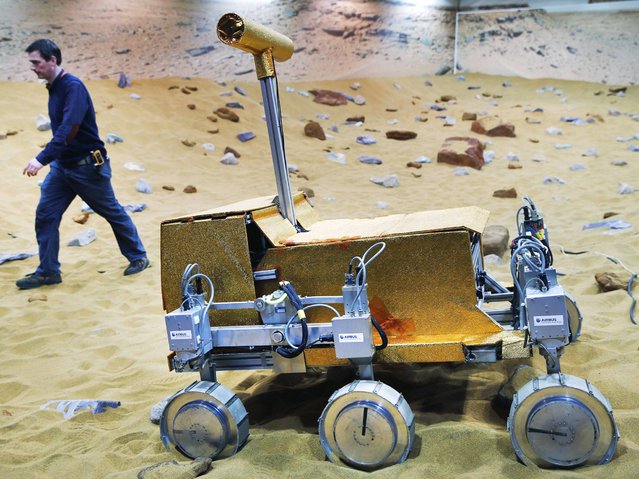 Engineer Ben Nye walks past a robotic vehicle on the “Mars Yard Test Area”, a testing ground for the robotic vehicles of the European Space Agency’s ExoMars program scheduled for 2018, in Stevenage, England, Thursday, March 27, 2014. It looks like a giant sandbox – except the sand has a reddish tint and the “toys” on display are very expensive prototypes designed to withstand the rigors of landing on Mars. The scientists here work on the development of the autonomous navigation capabilities of the vehicle, so by being in communication with controllers on earth twice a day, will be able to use the transmitted information to navigate to new destinations on Mars. (Photo by Lefteris Pitarakis/AP Photo) 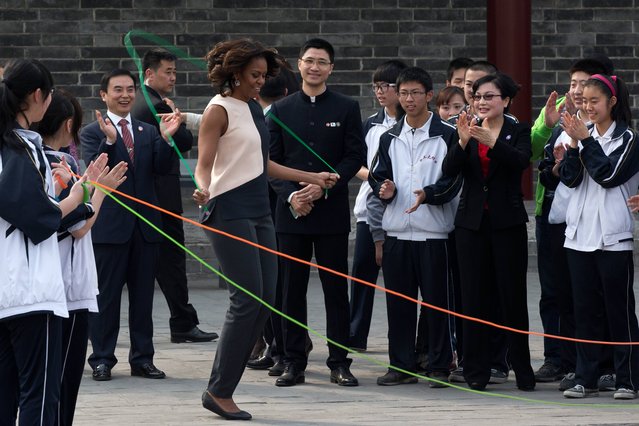 U.S. first lady Michelle Obama, center, jumps rope with Chinese schoolchildren during her visit to an ancient city wall with her daughters and her mother in Xi'an, in northwestern China's Shaanxi province, Monday, March 24, 2014. (Photo by Alexander F. Yuan/AP Photo) 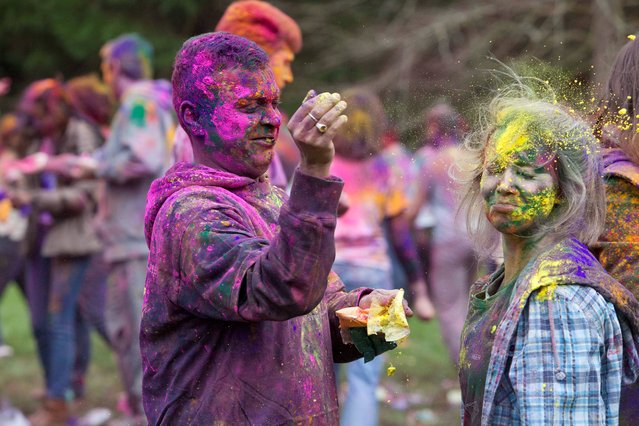 Shelly Conroy, UCC student joins with the UCC Indian Society as they celebrate the Holi Festival an Indian spring festival also known as the festival of colours and the festival of love, at the grounds of the Lewis Glucksman Gallery, University College Cork, on March 22, 2014. (Photo by Clare Keogh/PA Wire) 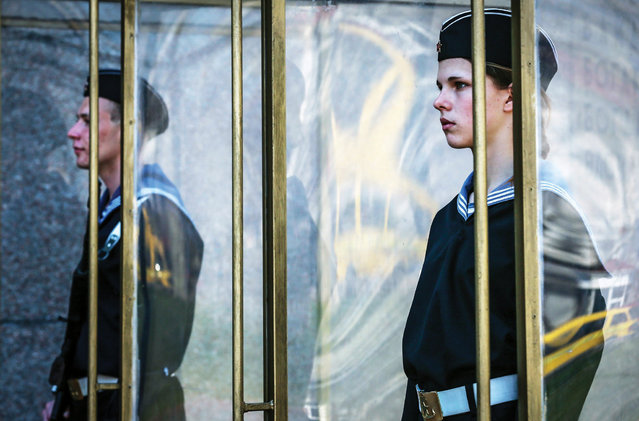 Crimean schoolchildren dressed as Soviet navy servicemen perform the change of the honor guard ceremony at the Memorial to the Heroes of the defense of Sevastopol 1941-1942 in Sevastopol, Crimea, 27 March 2014. It was the first change of guards since the beginning of the unrest in Ukraine. The monument's eternal flame was lit in honor of Russian soldiers who died defending the city against the Nazis. (Photo by Sergei Ilnitsky/EPA) 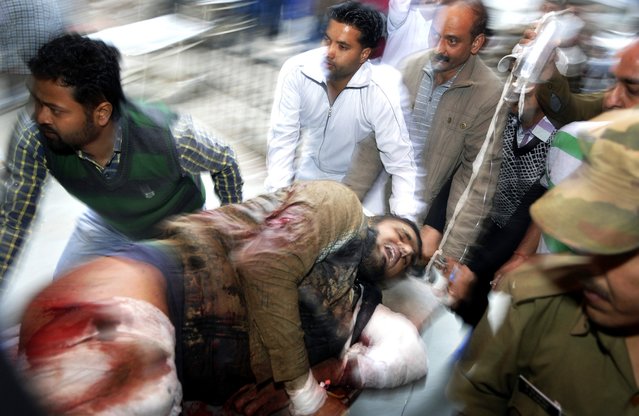 An injured person of a militant attack is being taken to the Government Medical College hospital in Jammu, India, March 28, 2014. One person was killed and three others were injured after a terror attack in Dayalachak in Kathua. (Photo by Jaipal Singh/EPA) 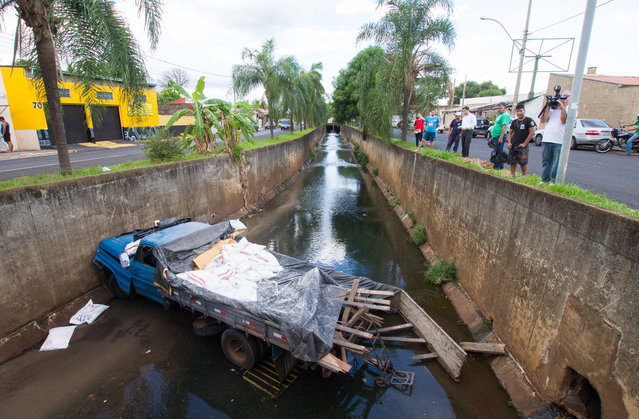 A National Police member shoots tear gas during clashes in an anti-government protest in Caracas on March 22, 2014. Thousands of Venezuelans demonstrated in Caracas to denounce alleged dictatorial actions of the government while a crowd of pro-Chavez students marched against “fascist violence”, in the framework of a month and a half of protests which left 31 dead so far. (Photo by Leo Ramirez/AFP Photo) 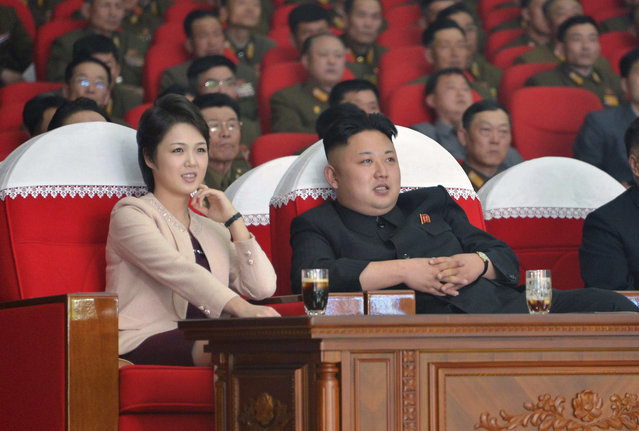