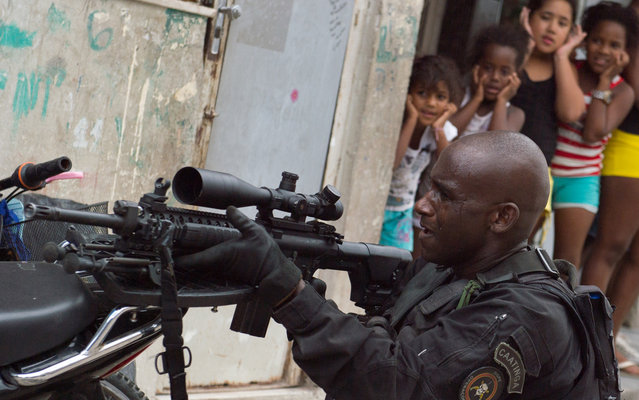 A group of girls watch how a PM paramilitary police BOPE special unit sniper secures the area as Brazilian soldiers (not framed) conduct a search for weapons in the Favela da Mare slum complex in the northern surburbs of Rio de Janeiro, Brazil on March 26, 2014. (Photo by Christophe Simon/AFP Photo) 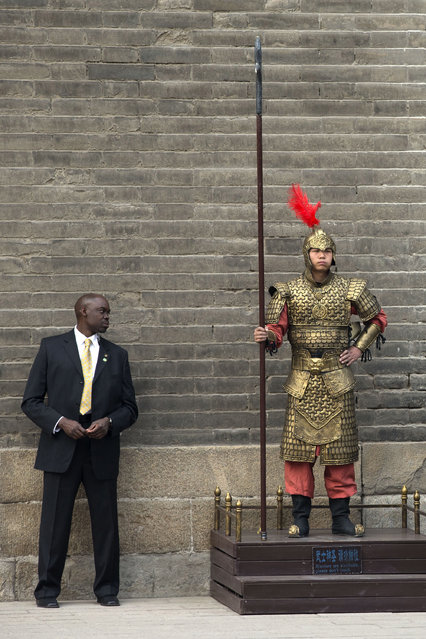 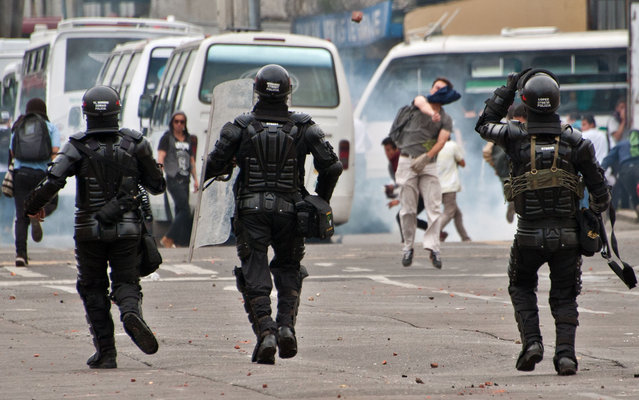 A student of the Pedagogical University (2-R) throws stones at the riot police during a protest demanding government to improve the quality of public education, in Bogota, Colombia, on March 27, 2014. (Photo by Guillermo Legaria/AFP Photo) 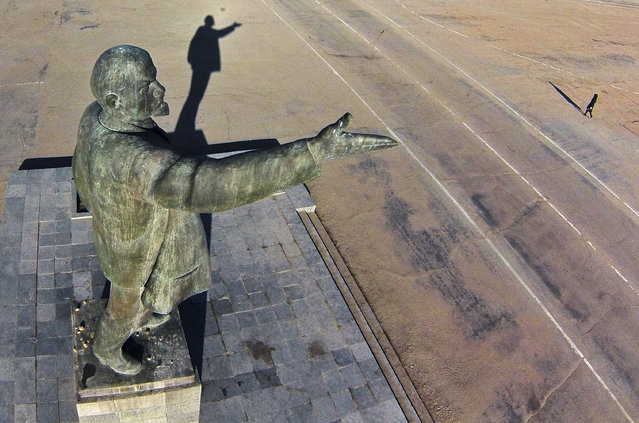 In this aerial photo a woman walks past a statue of Soviet Union founder Vladimir Lenin at the Russian leased Baikonur cosmodrome, in Kazakhstan, Thursday, March 27, 2014. Baikonur is the world's first and largest operational space launch facility. (Photo by Dmitry Lovetsky/AP Photo) 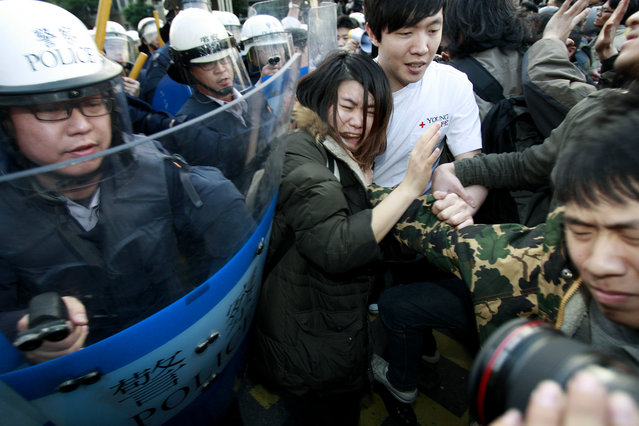 Students protesting against a China Taiwan trade pact are forced by riot police to leave the government Cabinet buildings in Taipei, Taiwan, Monday, March 24, 2014. Hundreds of protesters opposed to a far-reaching trade pact with China invaded Taiwan's Cabinet offices, marking a sharp escalation in a student-led movement against the island's rapidly developing ties with the communist mainland. (Photo by Wally Santana/AP Photo) 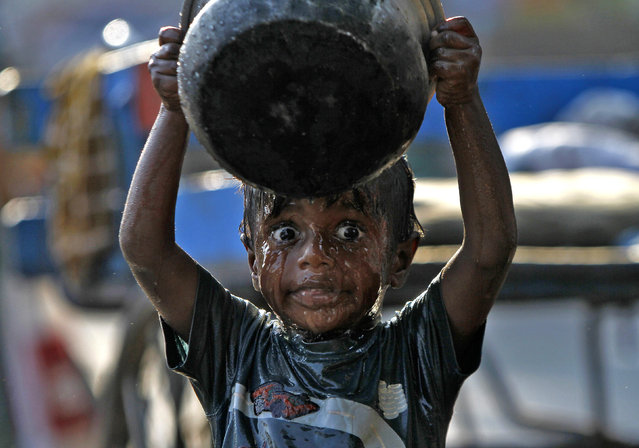 A boy takes a bath along a pavement in the southern Indian city of Chennai March 22, 2014. World Water Day is celebrated on March 22. (Photo by Reuters/Babu Babu) 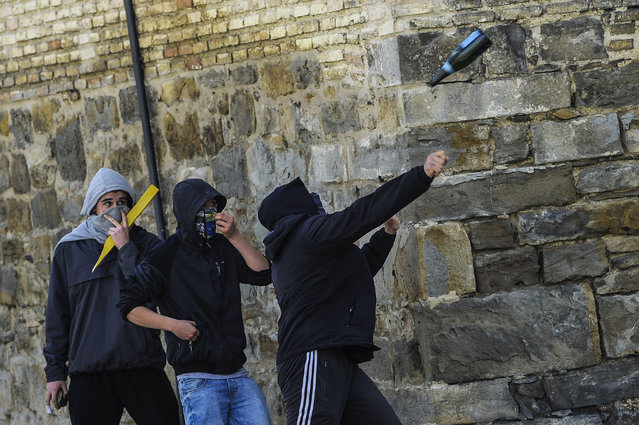 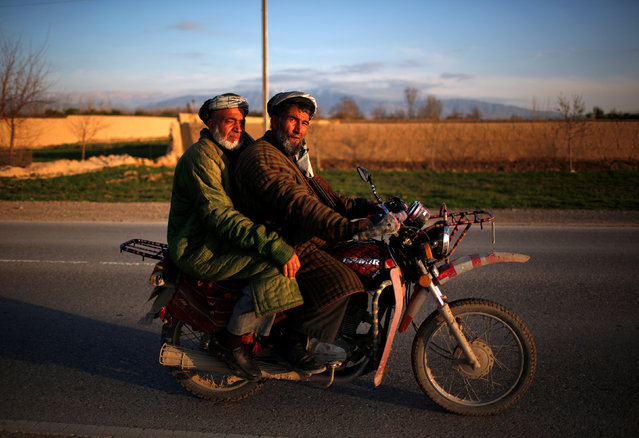 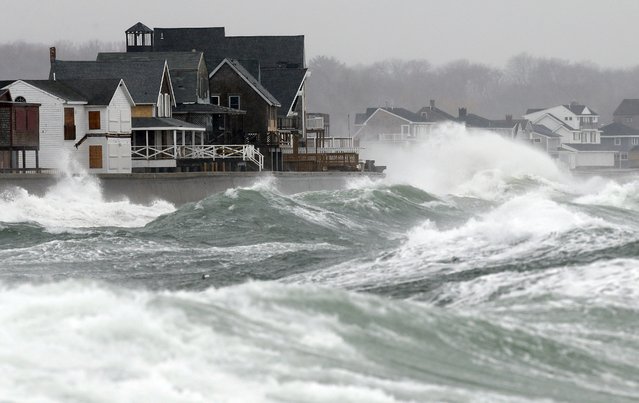 Wind-driven waves come ashore in Scituate, Mass., Wednesday, March 26, 2014. Cape Cod and the islands were expected to bear the brunt of the spring storm that struck full force Wednesday. The strom could drop up to 10 inches of snow. (Photo by Michael Dwyer/AP Photo) 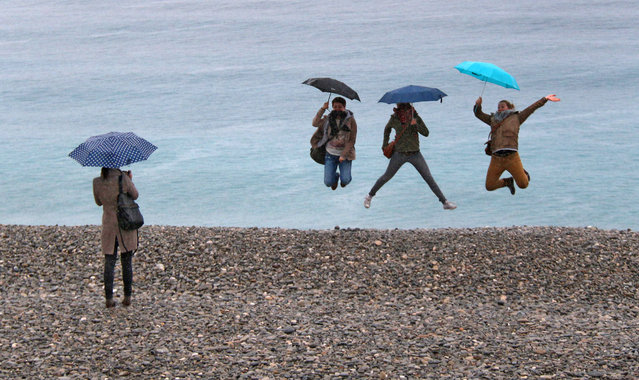 Tourists jump for a photo in front of the Mediterranean sea under their umbrellas by a rainy day, on the beach of Nice, southeastern France, Saturday, March 22, 2014. (Photo by Lionel Cironneau/AP Photo) 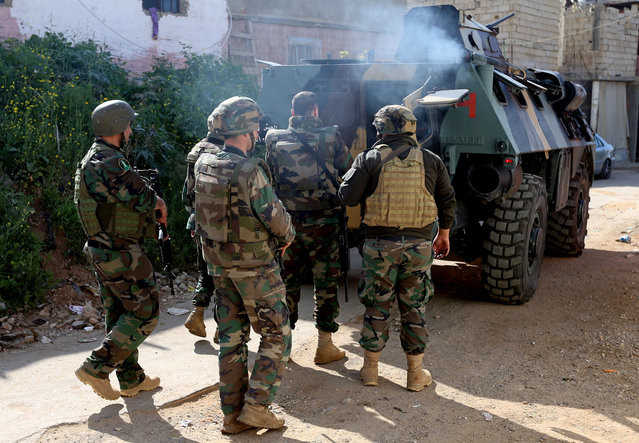 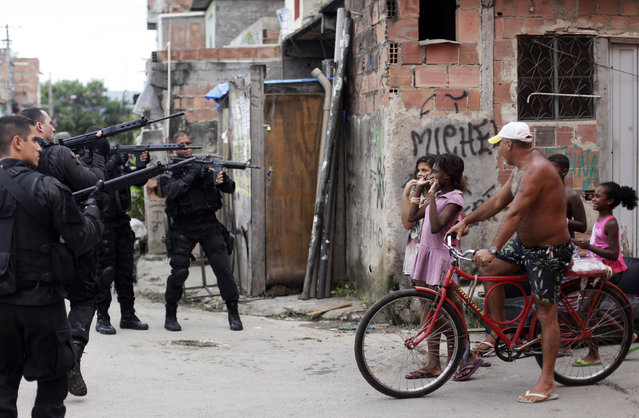 Residents react as policemen take position during an operation in the Mare slums complex in Rio de Janeiro March 26, 2014. Brazil will deploy federal troops to Rio de Janeiro to help quell a surge in violent crime following attacks by drug traffickers on police posts in three slums on the north side of the city, government officials said on Friday. Less than three months before Rio welcomes tens of thousands of foreign soccer fans for the World Cup, the attacks cast new doubts on government efforts to expel gangs from slums using a strong police presence. The city will host the Olympics in 2016. (Photo by Ricardo Moraes/Reuters) 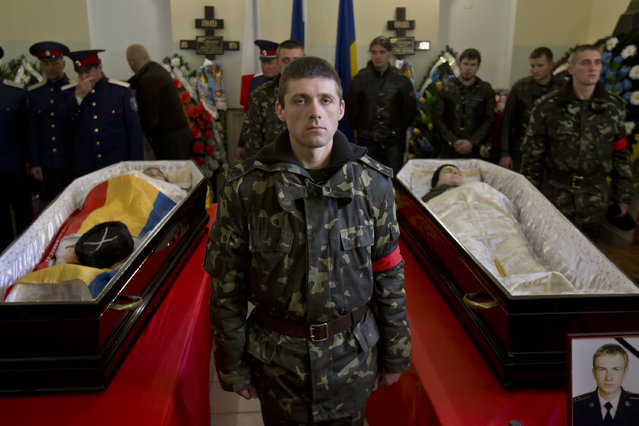 A Ukrainian soldier looks up standing between the coffins of Ukrainian soldier Sergey Kokurin, 35, right, and Russian Cossack militiaman Ruslan Kazakov, 34, left, during their funeral in Simferopol, Crimea, Saturday, March 22, 2014. A few hundred mourners gathered to pay their last respects to two men who were shot dead earlier in the week. Ukrainian soldier Sergey Kokurin, 35 and Russian Cossack militiaman Ruslan Kazakov, 34, are the only known victims of what has otherwise been a bloodless takeover of Crimea by Russia. (Photo by Vadim Ghirda/AP Photo) 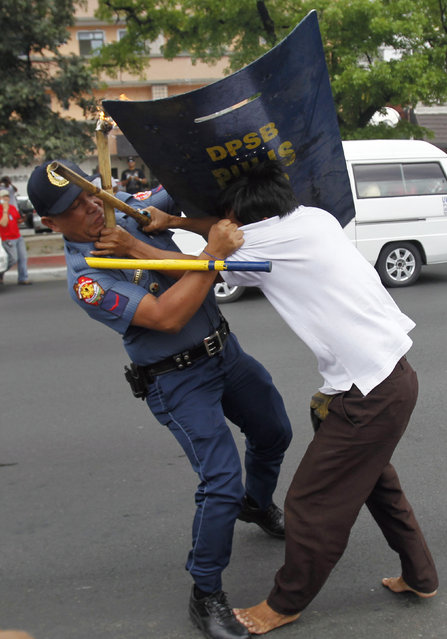 An anti-riot policeman grabs a protester during a rally in front of the U.S. Embassy in Manila March 27, 2014. The protesters denounced the Agreement on Enhanced Defense Cooperation that could legalize U.S. military presence in the Philippines and also protested against the upcoming visit of U.S. President Barack Obama in April, local media reported. (Photo by Romeo Ranoco/Reuters) 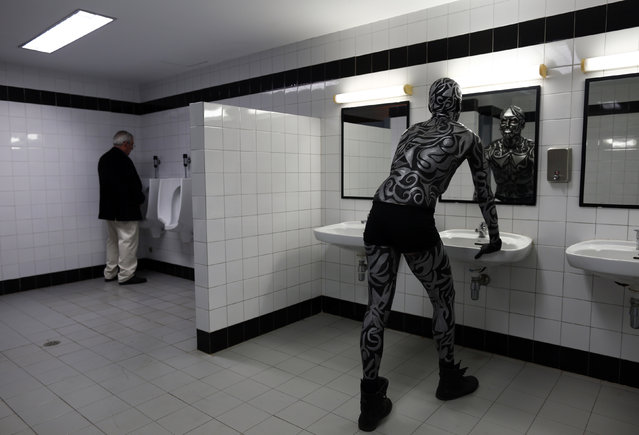 Ruben Hidalgo, 25, a contestant, looks at his reflection in the mirror at a bathroom before taking part in a body paint pageant during Expobelleza Andalucia (Expobeauty Andalusia) in the Andalusian capital of Seville March 24, 2014. (Photo by Marcelo del Pozo/Reuters) 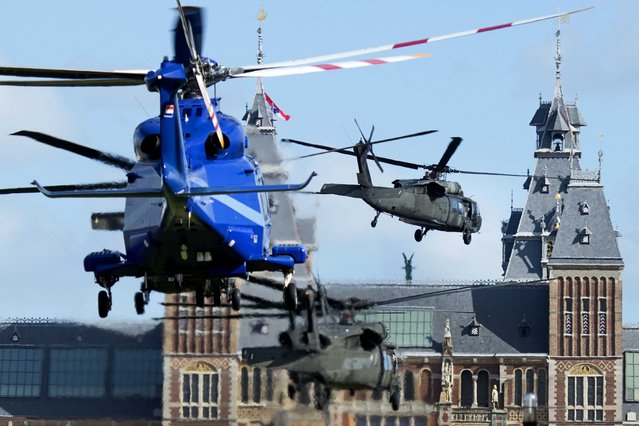 A US helicopter squadron carrying US President Barack Obama advances to land on the “Museumplein” (Museumsquare) in front of the Rijksmuseum in Amsterdam, The Netherlands, March 24, 2014. Obama pays a visit to the museum before leaving to The Hague to attend the two-days Nuclear Security Summit (NSS). (Photo by Olaf Kraak/EPA) 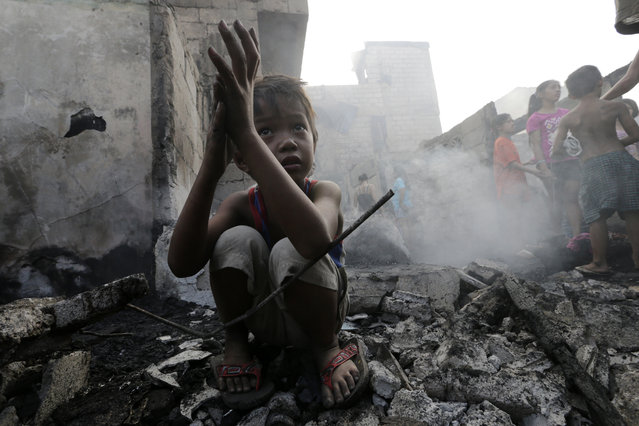 A Filipino boy rests among debris following a pre-dawn fire that razed a slum area in Manila, Philippines, March 23, 2014. Around 150 houses were destroyed at a shantytown leaving more than 200 families homeless. (Photo by Francis R. Malasig/EPA) 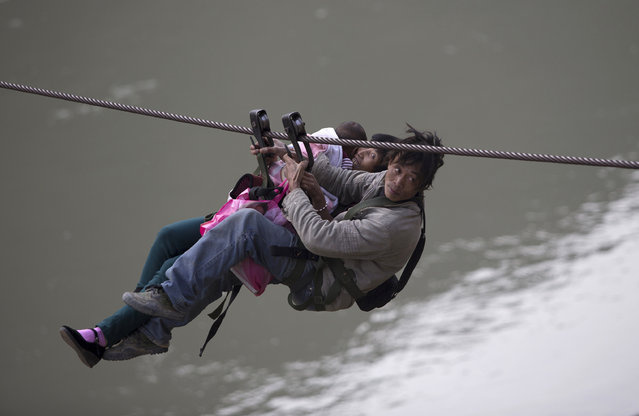 A man, his wife and their child use a zip-line to cross the Nujiang River in Lazimi village of Nujiang Lisu Autonomous Prefecture March 22, 2014. Residents have been using the zip-line for years to cross the river as there is no bridge nearby, local media reported. (Photo by Wong Campion/Reuters) 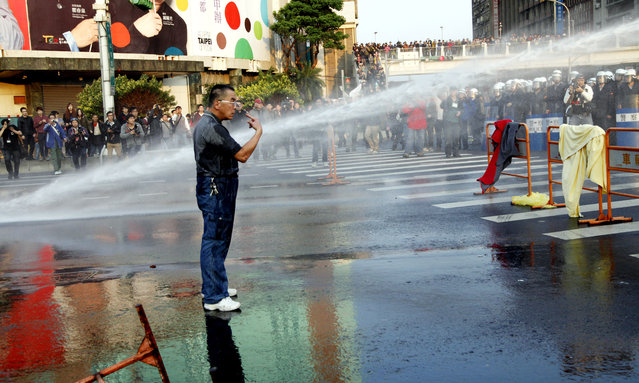 A protester refuses to leave the street despite being hit by police water cannon near the Cabinet compound in Taipei, Taiwan, March 24, 2014. Students' scuffle with police left 137 people injured. The students' protest against a controversial trade pact with China escalated on March 23 after President Ma Ying-jeou rejected students' demands, resulting in the students – who had occupied the parliament for five days – to occupy the Cabinet compound. On March 17, hundres of students occupied Taiwan parliament to protest what they say is the ruling party's forcing the passage of the Taiwan-China trade pact, saying it endangers Taiwan's security and hurts Taiwan's economy. They vowed to occupy the parliament until the parliament agrees to review the pact clause by clause. (Photo by David Chang/EPA) 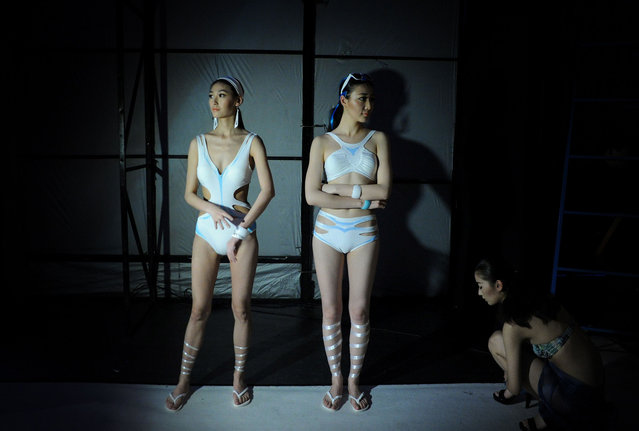 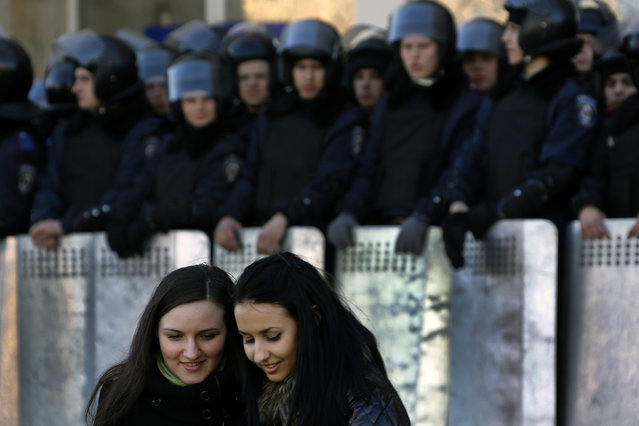 Ukrainian girls look at photos in their mobile phone as riot policemen stand guard in front of the regional administration building in central Donetsk March 22, 2014 during a protest. Several thousands of pro-Russian protesters marched from Lenin square to the regional administration building calling for the return of the pro-Moscow President Yanukovich. (Photo by Yannis Behrakis/Reuters) 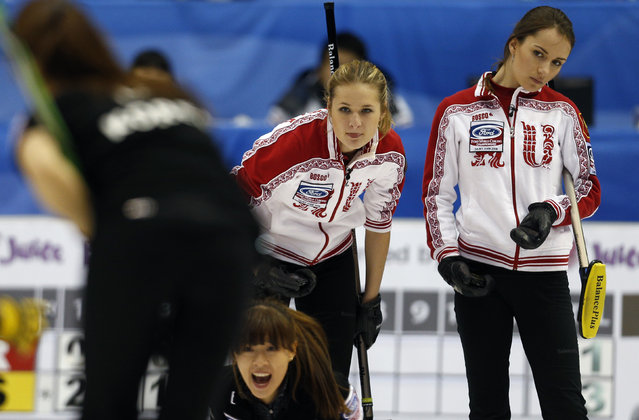 A man looks down at an unexploded barrel bomb dropped by forces loyal to Syria's President Bashar al-Assad at a cemetery in the al-Qatanah neighbourhood of Aleppo March 27, 2014. (Photo by Mahmoud Hebbo/Reuters) 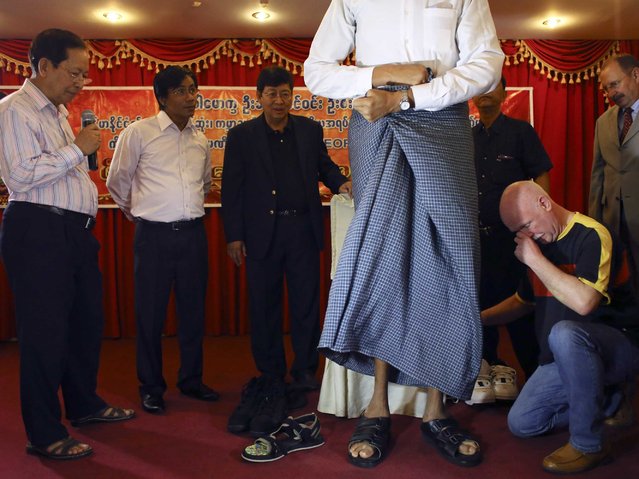 German shoemaker Georg Wessels (R) presents shoes to Win Zaw Oo, who according to his medical team, at 2.3 metres (7.5 ft), is Myanmar's tallest man, in Yangon March 26, 2014. (Photo by Reuters/Minzayar) 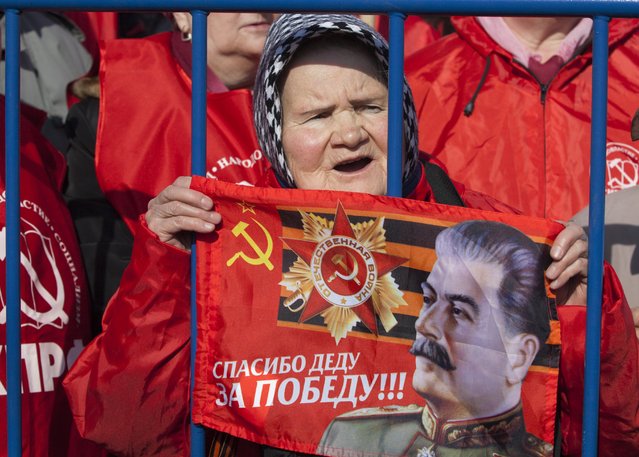 An elderly Russian Communist party supporter holds up a portrait of Soviet dictator Josef Stalin with a Soviet Union sign during a rally in support of Crimea joining Russia near the Red Square in Moscow, Russia, on Saturday, March 22, 2014. Moscow on Friday formally sealed Crimea’s annexation, less than a week after a referendum where Crimeans overwhelmingly voted to join Russia. (Photo by Alexander Zemlianichenko Jr/AP Photo) 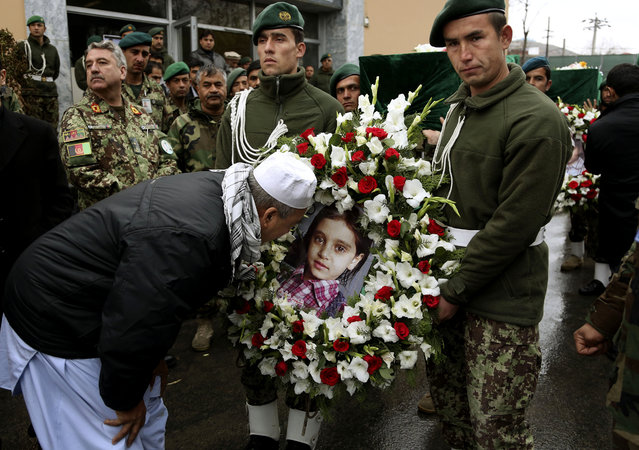 Shah Mohammad, older brother of killed Afghan Agence France-Press journalist Sardar Ahmad attempts to give a kiss to his niece Nilofar's picture during a funeral ceremony in Kabul, Afghanistan, Sunday, March 23, 2014. Sardar, his wife and two of his young children were killed when four gunmen attacked the Serena hotel in Kabul during New Year's celebrations on March 20, 214. Nine people, including four foreigners were killed during the attack. (Photo by Rahmat Gul/AP Photo) 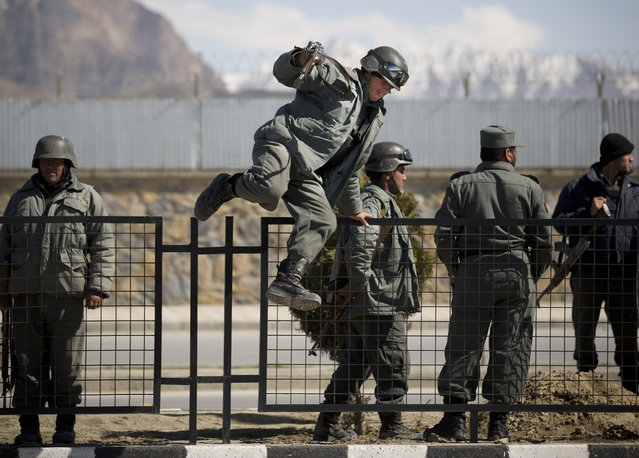 Afghan policemen arrive to the scene after the Taliban launched an assault with a suicide bomber detonating his vehicle outside an election office in Kabul, Afghanistan, Tuesday, March 25, 2014. Gunmen stormed into the building, trapping dozens of employees inside and killing many people. A candidate for a seat on a provincial council was among those killed, along with an election worker, a civilian and a policeman. (Photo by Anja Niedringhaus/AP Photo) 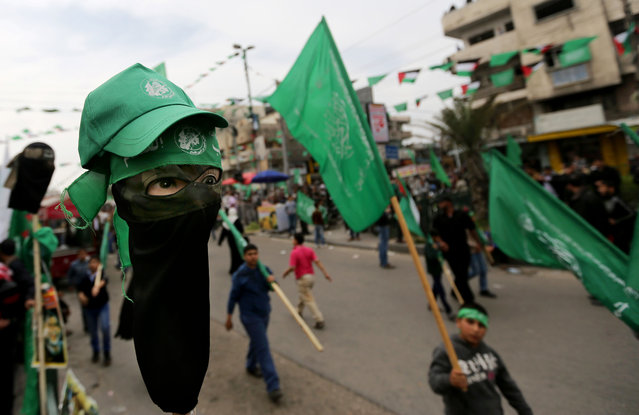 Hamas bandanas are displayed for sale on a mannequins head, left, as tens of thousands of Hamas supporters attend a rally to commemorate the 10-year anniversary of the assassination of the group's spiritual leader in an Israeli airstrike, in Gaza City, Sunday, March 23, 2014. The Islamic militant group's top leadership was on hand for Sunday's rally, and thousands of people holding Hamas flags and wearing Hamas bandanas have turned downtown Gaza City into a sea of green. (Photo by Hatem Moussa/AP Photo) 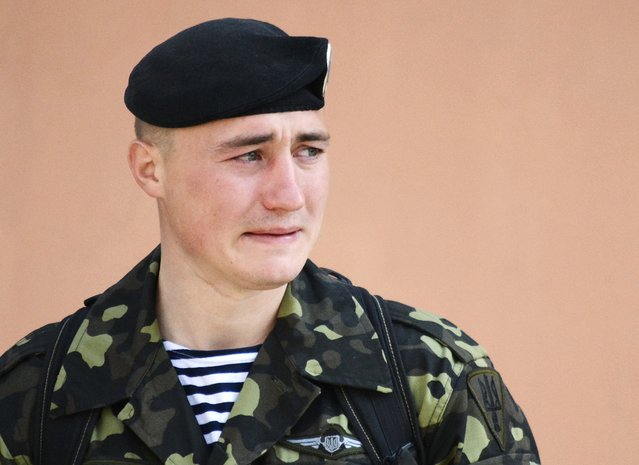 A Ukrainian marine reacts as his comrades leave the base in Feodosia, Crimea, Tuesday, March 25, 2014. In Crimea, Ukrainian soldiers piled onto buses and began their journey to Ukrainian territory on Tuesday, as former comrades saluted them from outside a base overrun by Russian forces. (Photo by Valeriy Kulyk/AP Photo) 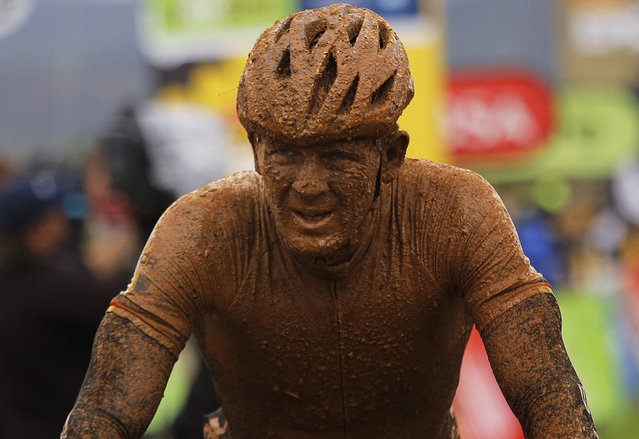