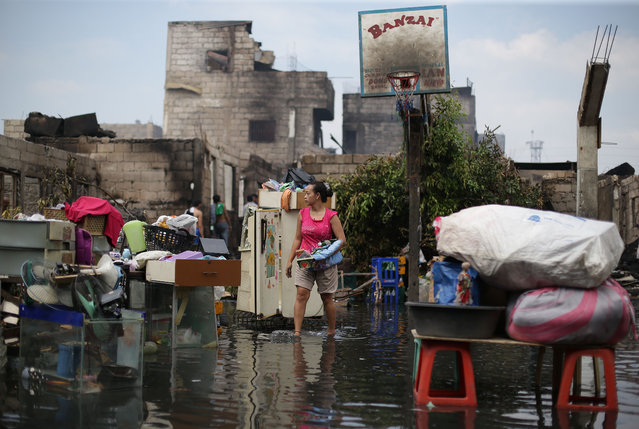 A Filipino woman searches for belongings along a flooded road beside their burned house in Manila, Philippines, Sunday, March 23, 2014. About 200 houses were gutted by fire as authorities are still investigating the cause of the fire. (Photo by Aaron Favila/AP Photo) 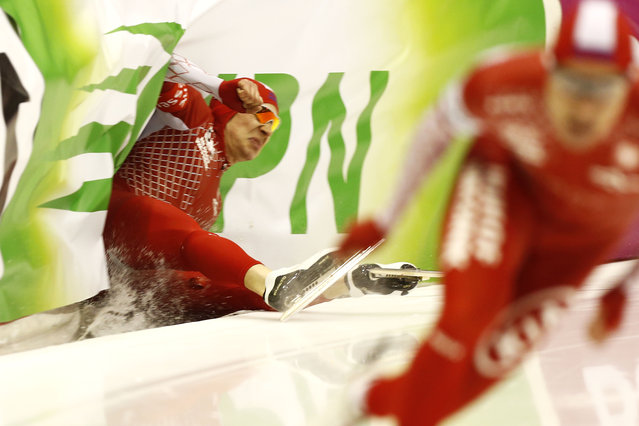 An Israeli model takes a photo of Mor Maman, Miss Israel 2014, posing next to a Gorilla statue and wearing swimwear by Intima after they walked the catwalk during a showing of the summer 2014 collection, in Tel Aviv Ramt Gan Zoological Center near Tel Aviv, Israel, Sunday, March 23, 2014. (Photo by Ariel Schalit/AP Photo) 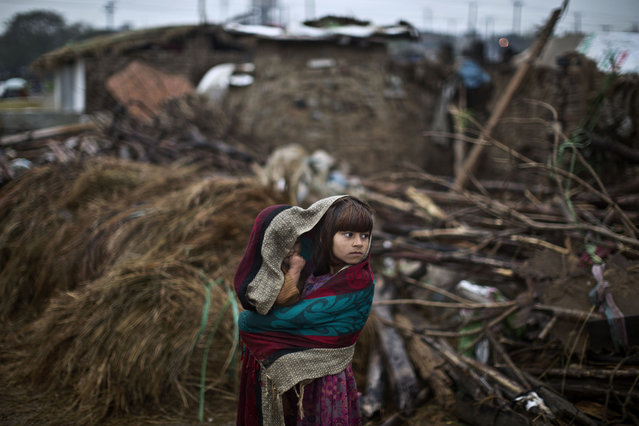 An Afghan refugee girl, wraps herself and her younger brother with a shawl to shield from the rain, while looking at mud houses of Afghan refugee families which were destroyed by the Capital Development Authority for being built on illegal lands, in a slum on the outskirts of Islamabad, Pakistan, Monday, March 24, 2014. Slums which are built on illegal lands have neither running water or sewage disposal. (Photo by Muhammed Muheisen/AP Photo) 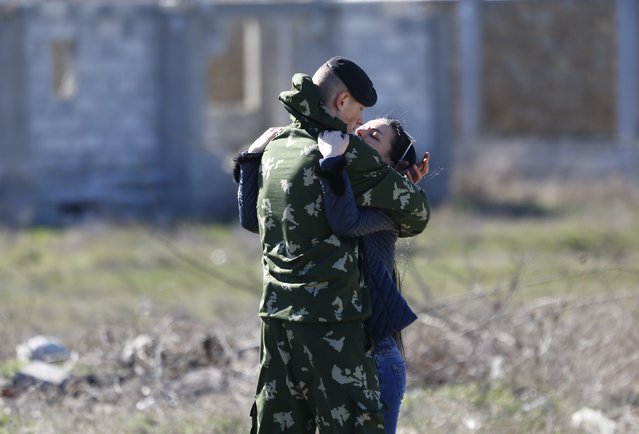 A woman hugs a Ukrainian marine in front of a Ukrainian marine base in the Crimean port city of Feodosia, March 23, 2014. Russia's defence ministry said on Sunday that it was complying with international troop limits near its border with Ukraine, after NATO's top military commander voiced concern over what he said was a large Russian force on Ukraine's eastern border. (Photo by Shamil Zhumatov/Reuters) 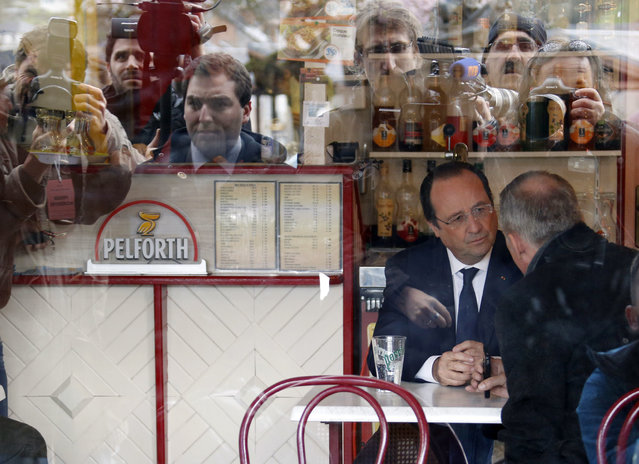 France's President Francois Hollande is seen speaking in a bar after voting in the first round in the French mayoral elections in Tulle, center France, March 23, 2014. The French goes to the polls to cast votes in the two-round 2014 Municipal elections today and on March 30 to elect city mayors and councillors for a six-year term. (Photo by Regis Duvignau/Reuters) 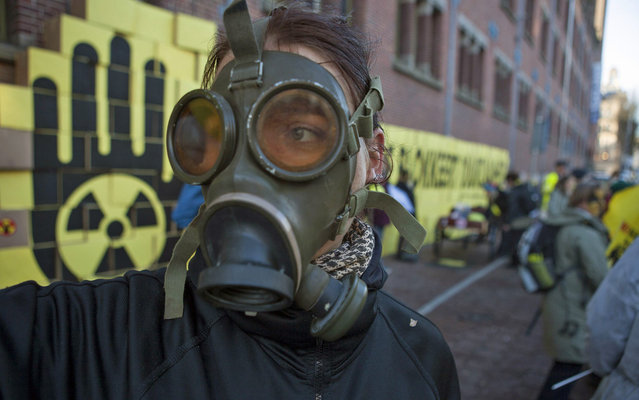 A demonstrator wears a gas mask as he gathers to protest against the Nuclear Industry Summit, which is taking place on the sidelines of the Nuclear Security summit (NSS), in Amsterdam March 24, 2014. The Nuclear Security Summit on March 24-25, aimed at preventing nuclear terrorism, will bring together several world leaders. (Photo by Cris Toala Olivares/Reuters) 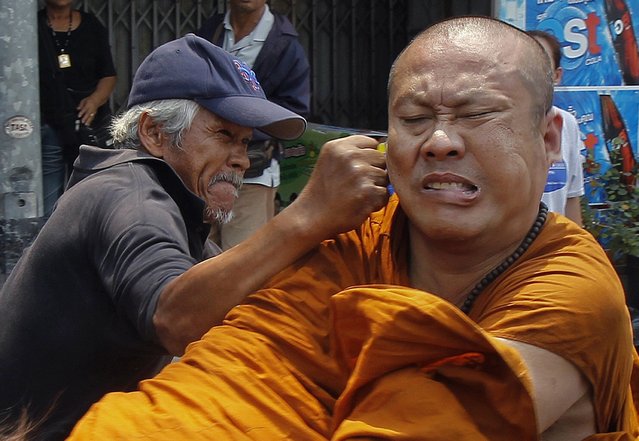 A member of the pro-government “red shirt” movement attacks a Buddhist monk outside the National Anti-Corruption Commission office in Nonthaburi province, on the outskirts of Bangkok March 24, 2014. Members of the movement attacked the monk after he shouted complaints to the group blocking a road near the National Anti-Corruption Commission. (Photo by Chaiwat Subprasom/Reuters) 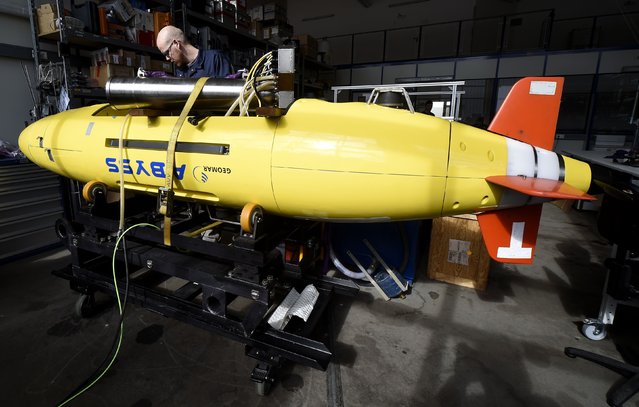 Electrical engineer Lars Triebe inspects the Autonomous Underwater Vehicle (AUV) “Abyss” in preparation for operational service, at the Helmholtz Centre for Ocean Research Kiel (GEOMAR) in Kiel March 24, 2014. The “Abyss”, one of only three worldwide unmanned deep sea search submarines, may join the hunt for the missing Malaysia Airlines flight MH370. The submarine is designed to perform hydrographic reconnaissance in all parts of the ocean in depths up to 6000 meters and can stay submerged for up to 22 hours. (Photo by Fabian Bimmer/Reuters) A car drives with a Russian flag on a road outside the Crimean port city of Feodosia March 24, 2014. Ukraine announced the evacuation of its troops and their families from Crimea on Monday, effectively acknowledging defeat in the face of Russian forces, who stormed one of the last remaining Ukrainian bases on the peninsula. (Photo by Shamil Zhumatov/Reuters) 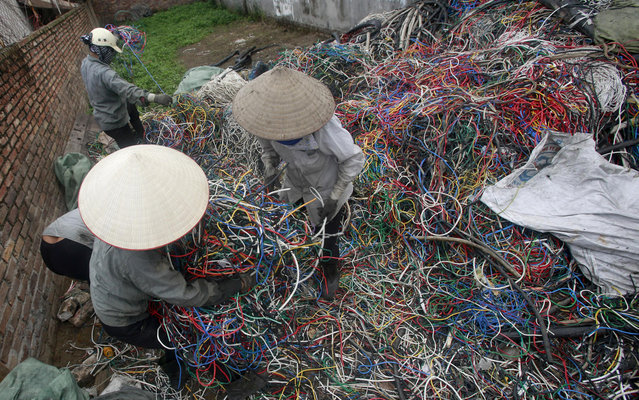 Women pack electric cables in Quan Do village, north of Hanoi March 25, 2014. Quan Do village is known amongst locals as the place to purchase recycled materials that come from a variety of sources such as aircrafts, ships and various modes of transport. According to local media, despite warnings from experts that this practice is polluting their village, the villagers have been carrying out their trade for more than 25 years. (Photo by Reuters/Kham) 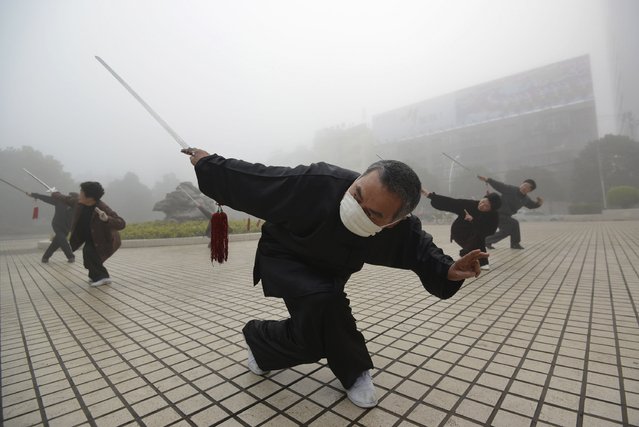 A man wearing a mask does morning exercise on a hazy day in Fuyang, Anhui province, March 26, 2014. (Photo by Reuters/China Daily) 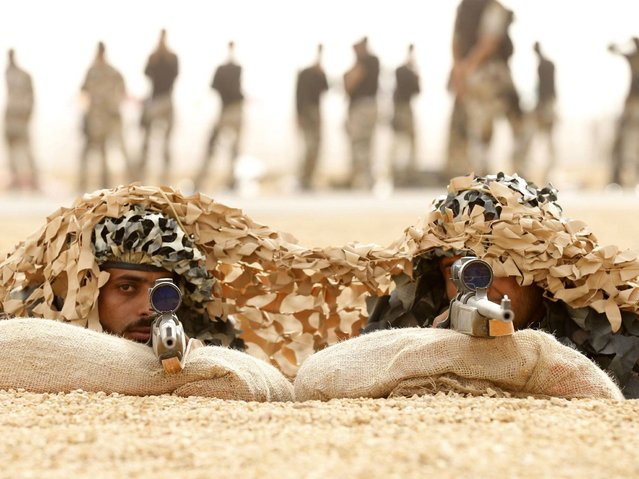 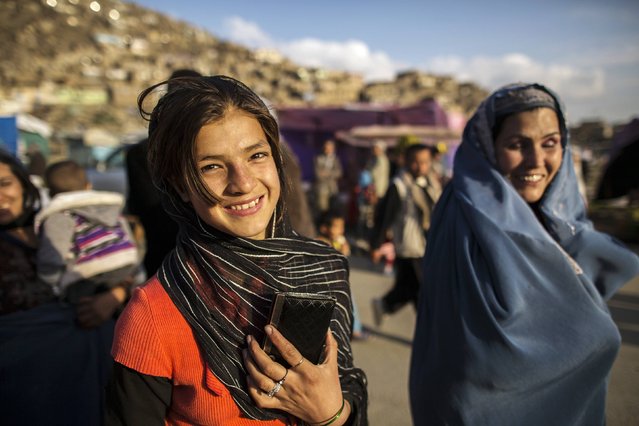 A girl smiles as she walks after visiting the Sakhi shrine in Kabul March 26, 2014. (Photo by Zohra Bensemra/Reuters) 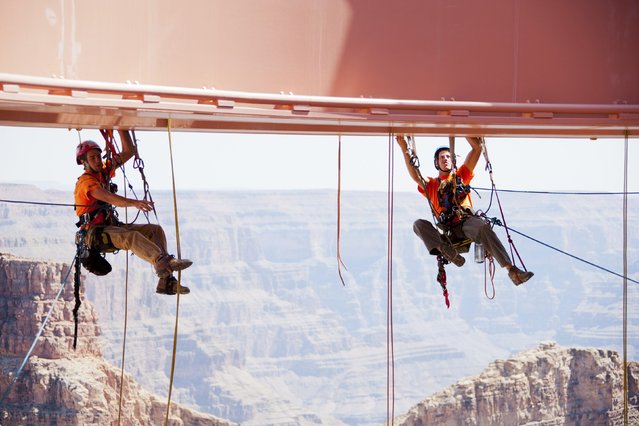 Technicians from Abseilon USA work to clean more than 40 panes of glass underneath the horseshoe-shaped bridge at the Grand Canyon Skywalk in Arizona in this handout picture courtesy of George & Pat Walsh of GPWalshPhotography.com, taken March 24, 2014. (Photo by George & Pat Walsh/Reuters)

Technicians from Abseilon USA working to clean more than 40 panes of glass underneath the horseshoe-shaped bridge at the Grand Canyon Skywalk in Arizona, on March 24, 2014. (Photo by George and Pat Walsh of GPWalshPhotography.com/Reuters) 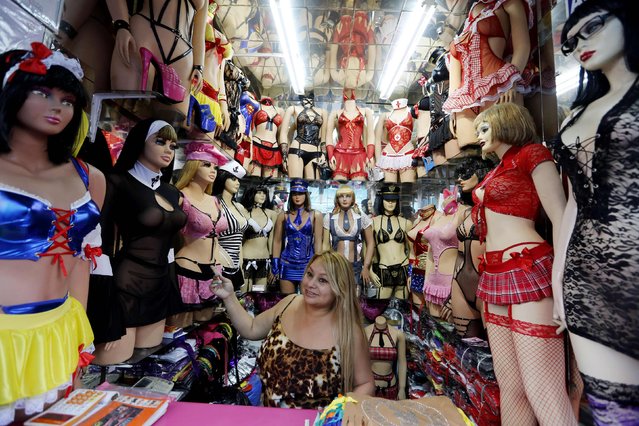 Businesswoman and vendor Sonia Maria Paypay sells clothing at a stand at the commercial zone of Gamarra in Lima, March 21, 2014. Gamarra, located in the central district of La Victoria, is home to the largest textile industry in Lima and has several shops and malls where all kinds of clothing are made. Gamarra from the 80s has not only helped develop medium and micro Peruvian companies but also played a major role in the development of the textile and fashion design industries in Peru. There are more than 10,000 entrepreneurs and 17,000 stores housed in the 20 blocks in the district, according to local media. Picture taken March 21, 2014. (Photo by Mariana Bazo/Reuters) 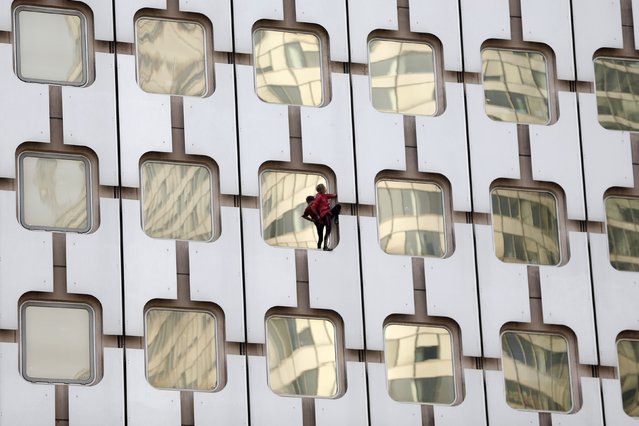 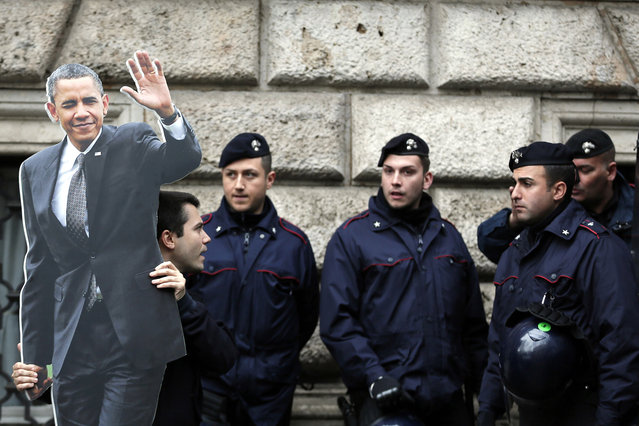 A demonstrator holds a picture in front of Carabinieri's police during a protest against U.S. President Barack Obama near the U.S. Embassy in Rome, March 27, 2014. Obama urged NATO allies on Thursday to get their defense budgets on an upward trajectory with “everybody pitching in” as he wounded up a day of meetings with Vatican and Italian officials. (Photo by Yara Nardi/Reuters) 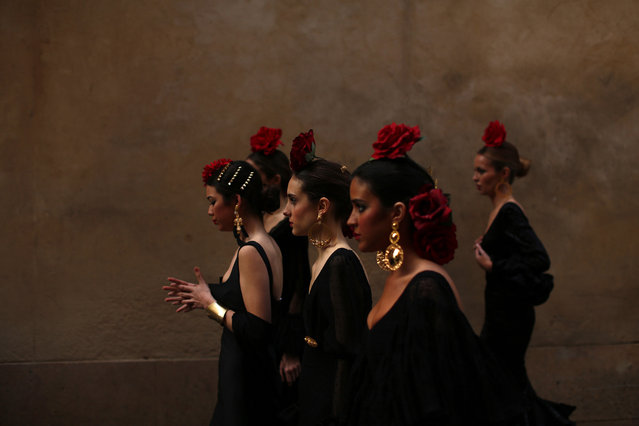 Models wearing flamenca dresses head to an event to mark the twentieth anniversary of the International Flamenco Fashion Show in Seville, Spain, on March 27, 2014. (Photo by Marcelo del Pozo/Reuters) 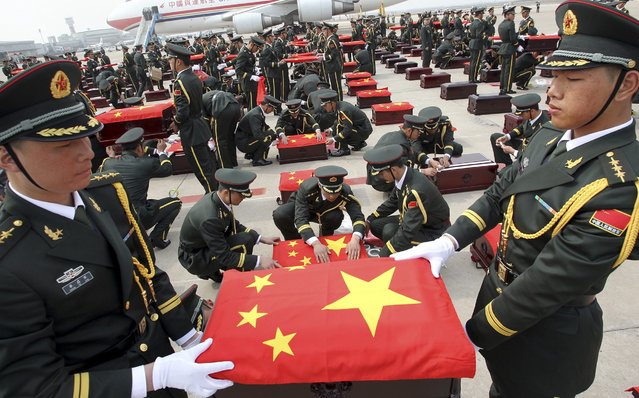 Soldiers of the Chinese People's Liberation Army (PLA) hold caskets containing the remains of soldiers of the Chinese People's Volunteers (CPV) in Shenyang, Liaoning province, March 28, 2014. The remains of 437 Chinese soldiers killed during the 1950-53 Korean War returned to China from a temporary columbarium in South Korea. (Photo by Reuters/China Daily) 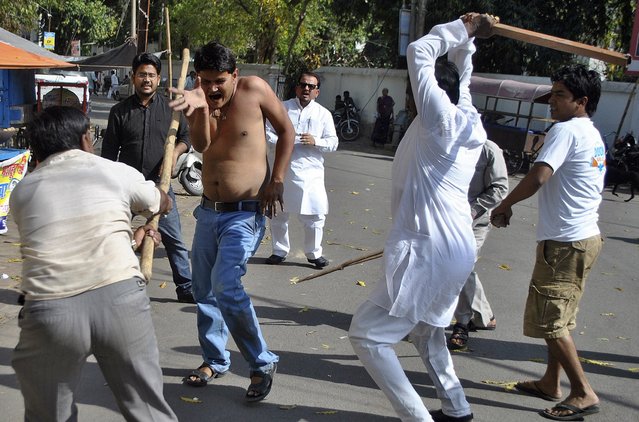 Employees of the Bundelkhand Vikas Sena (BVS) use batons to hit a worker of India's ruling Congress party during a clash at a demonstration outside the Congress office in the northern Indian city of Lucknow March 28, 2014. The BVS workers were protesting against the Congress manifesto, saying it did not have any package for the development of Bundelkhand, local media reported on Friday. (Photo by Reuters/Stringer) 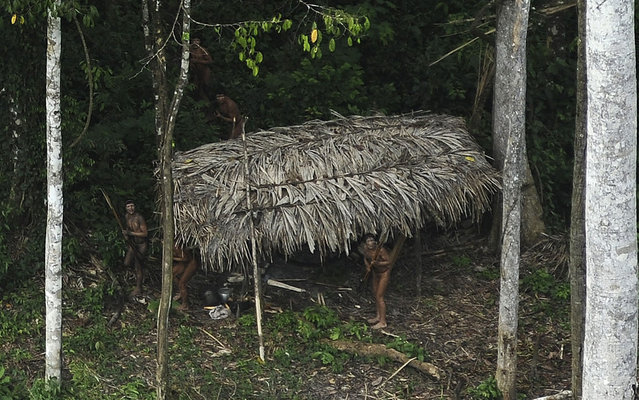 Indians who are considered uncontacted by anthropologists react to a plane flying over their community in the Amazon basin near the Xinane river in Brazil's Acre State, near the border with Peru, March 25, 2014. Leaders of the Ashaninka tribe, which shares territory with this tribe and other uncontacted ones, have asked the government and NGOs for help in controlling what they consider the encroachment of these tribes on their own area, stating that the movement of other tribes is caused by pressure from illegal logging across the border in Peru. (Photo by Lunae Parracho/Reuters) 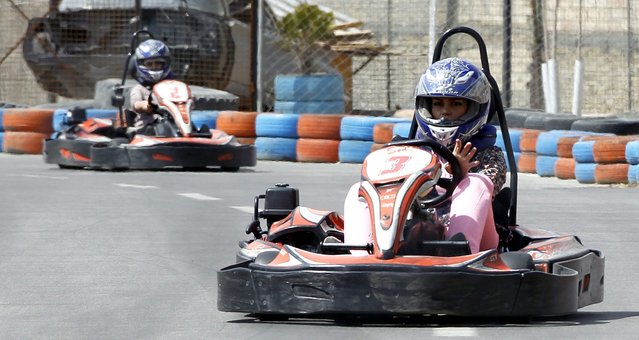 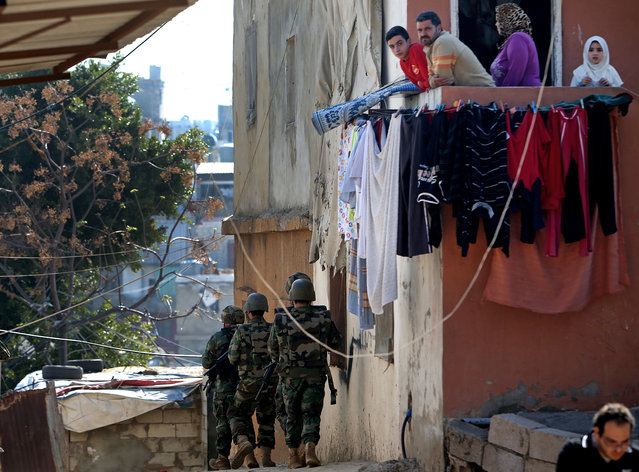 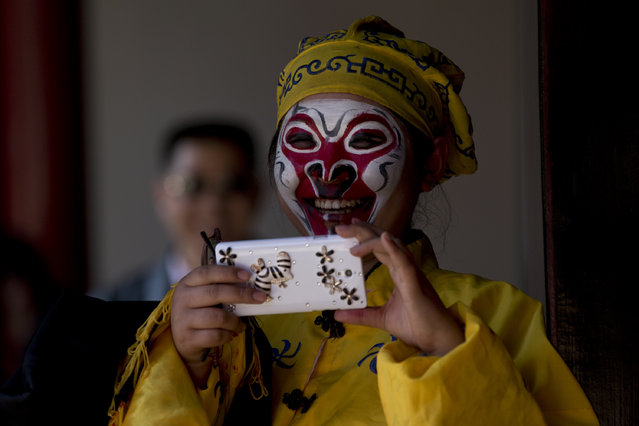 A child plays on a swing in the Prazeres pacified favela community on March 22, 2014 in Rio de Janeiro, Brazil. The favela was previously controlled by drug traffickers but is now occupied by the city's Police Pacification Unit (UPP). A number of UPPs were attacked by drug gang members on March 20, prompting some pacified favelas to soon receive federal forces as reinforcements. The UPP is patrolling some of Rio's favelas amid the city's efforts to improve security ahead of the 2014 FIFA World Cup and 2016 Olympic Games. (Photo by Mario Tama/Getty Images) 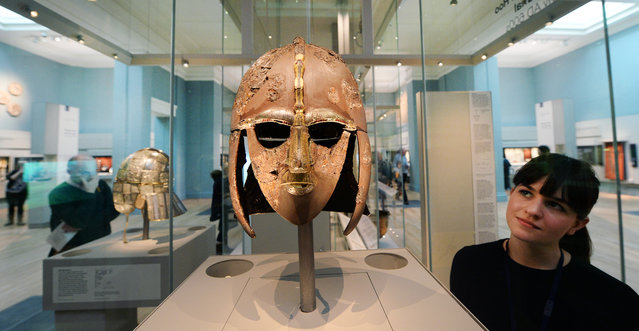 A woman looks at the Sutton Hoo helmet that is on display at the new public gallery in room 41 at the British Museum in London, Britain, March 25. 2014. The museum has opened a new gallery devoted to the archeological site of the Sutton Hoo treasure and Europe AD 300-1100 after undergoing a refurbishment. (Photo by Andy Rain/EPA) 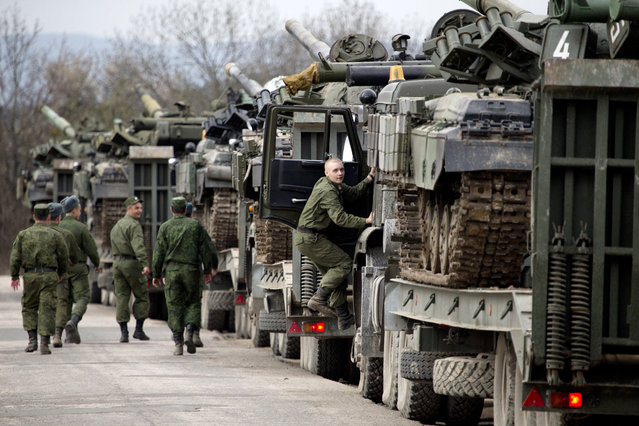 Ukrainian soldiers transport their tanks from their base in Perevalnoe, outside Simferopol, Crimea, Wednesday, March 26, 2014. Ukraine has started withdrawing its troops and weapons from Crimea, now controlled by Russia. Foreign policy used to stand out as a not-so-bleak spot in the public's waning assessment of Barack Obama. Not anymore. He's getting low marks for handling Russia's swoop into Ukraine, and more Americans than ever disapprove of the way Obama is doing his job, according to a new poll. Close to 9 out of 10 Americans support sanctions as a response to Russia's annexation of the Crimean Peninsula. They are divided over whether the U.S. sanctions so far are about right or not strong enough, the Associated Press-GfK poll found. (Photo by AP Photo)
Edit Del
29 Mar 2014 13:50:00, post received 0 comments
Publication archive:
←   →
Popular tags:
All tags
Last searches: