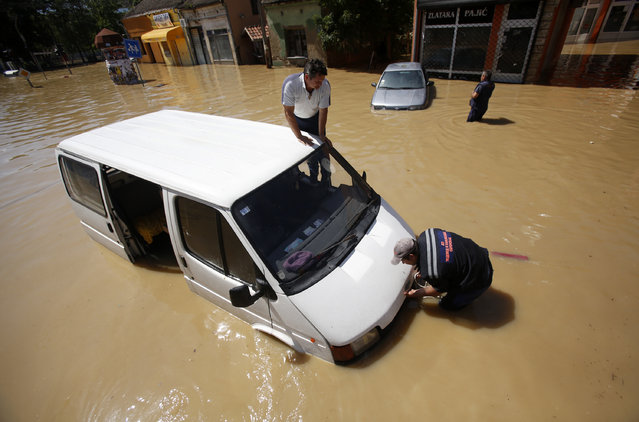 Two men trying to restart their van stuck in a flooded street in Obrenovac, some 30 kilometers (18 miles) southwest of Belgrade, Serbia, Monday, May 19, 2014. Belgrade braced for a river surge Monday that threatened to inundate Serbia's main power plant and cause major power cuts in the crisis-stricken country as the Balkans struggle with the consequences of the worst flooding in southeastern Europe in more than a century. At least 35 people have died in Serbia and Bosnia in the five days of flooding caused by unprecedented torrential rain, laying waste to entire towns and villages and sending tens of thousands of people out of their homes, authorities said. (Photo by Darko Vojinovic/AP Photo) 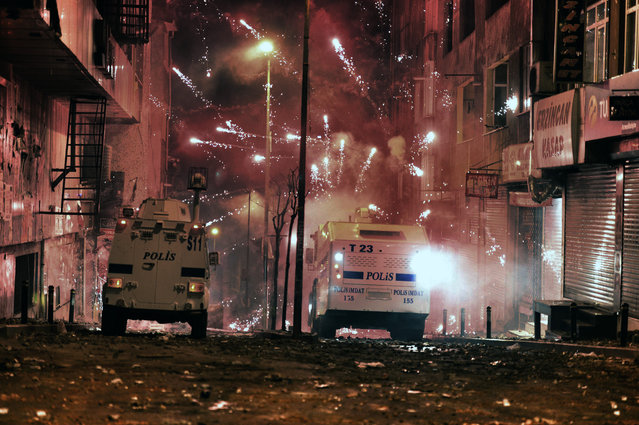 Riot police use water cannon and teargas to disperse people who were protesting the Soma mine disaster that killed 301 miners, in Istanbul, Turkey, late Thursday, March 22, 2014. Two protesters were seriously injured during clashes. (Photo by AP Photo) 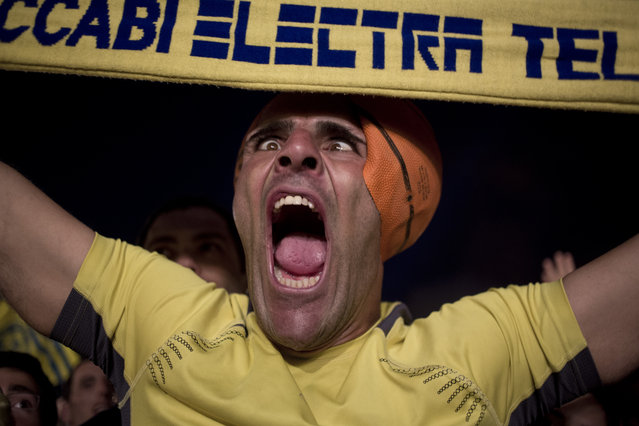 A Maccabi Tel Aviv's basketball supporter celebrates the team's victory in the European basketball championship in Rabin's square in Tel Aviv, Israel, Monday, May 19, 2014. Tens of thousands of Maccabi Tel Aviv fans thronged a central square in Tel Aviv on Monday to celebrate the team's stunning victory in the European basketball championship, capping a national outpouring of joy that went far beyond the boundaries of sports. (Photo by Ariel Schalit/AP Photo) 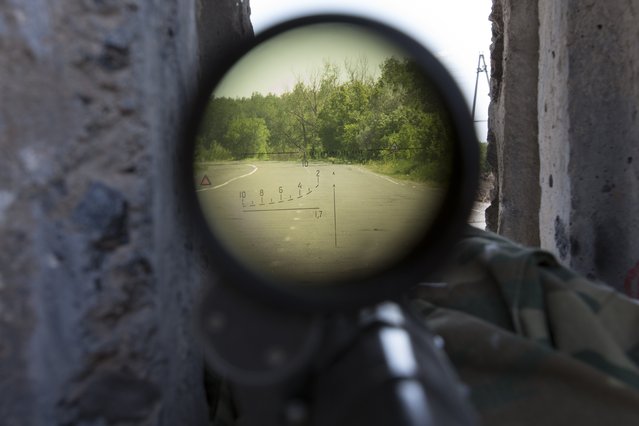 A view through a sniper's rifle from a pro-Russian checkpoint blocking the major highway which links Kharkiv, outside Slovyansk, eastern Ukraine, Sunday, May 18, 2014. Lawmakers and officials from eastern Ukraine on Saturday poured criticism on the fledging central government, accusing it of ignoring legitimate grievances of the regions which have been overrun by pro-Russia militia fighting for independence. (Photo by Alexander Zemlianichenko/AP Photo) 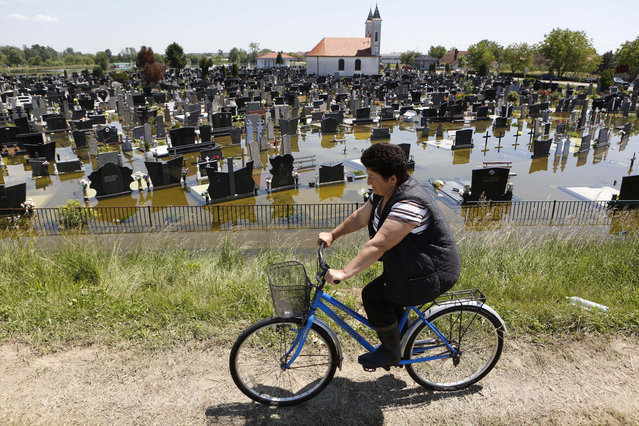 A Bosnian woman cycles past a flooded cemetery in the village of Domaljevac near the Bosnian town of Orasje along river Sava, 200 kms north of Bosnian capital of Sarajevo, on Wednesday, May 21, 2014. Floodwaters receded Wednesday in Bosnia and Serbia, just enough to reveal the next shock: recovery from the historic flood will probably cost billions of euros that neither of the countries has. (Photo by Amel Emric/AP Photo) 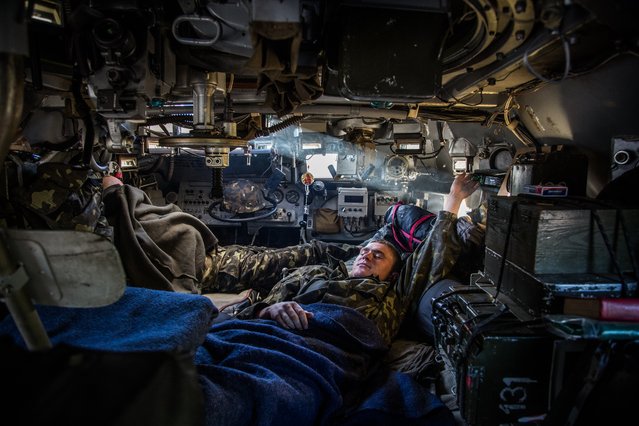 A Ukrainian government soldier rests inside an armored personnel carrier at a checkpoint near Slovyansk, Ukraine, Wednesday, May 21, 2014. The government has over the past week had its hand in the east strengthened by a sequence of strongly worded statements by metals tycoon Rinat Akhmetov, who owns major industrial assets in Donetsk region. (Photo by Petr Shelomovskiy/AP Photo) 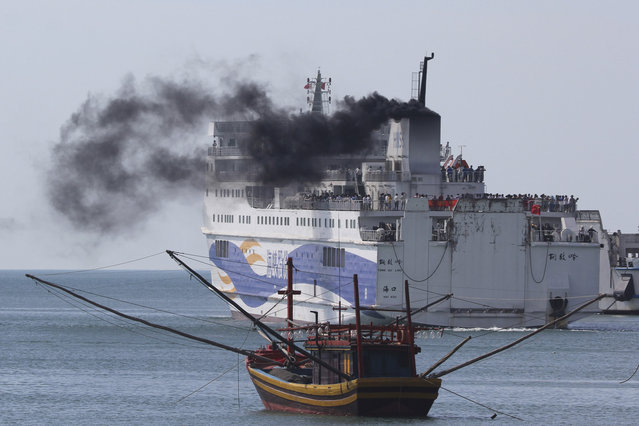 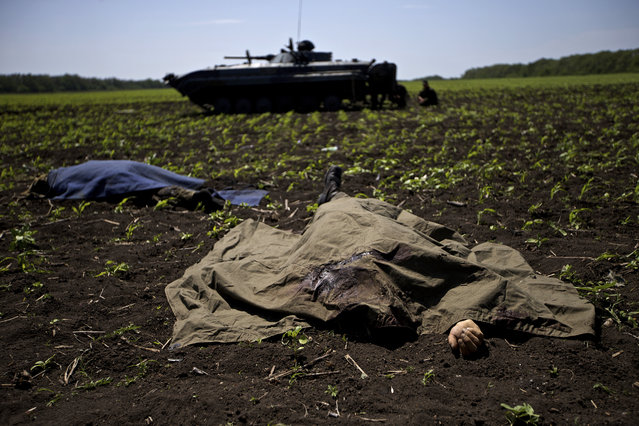 Bodies covered with blankets lie in a field near the village of Blahodatne, eastern Ukraine, on Thursday, May 22, 2014, as a Ukrainian soldier smokes next to his armored infantry vehicle. At least 11 Ukrainian troops were killed and about 30 others were wounded when Pro-Russians attacked a military checkpoint, the deadliest raid in the weeks of fighting in eastern Ukraine. Three charred Ukrainian armored infantry vehicles, their turrets blown away by powerful explosions, and several burned vehicles stood at the site of the combat. (Photo by Ivan Sekretarev/AP Photo) 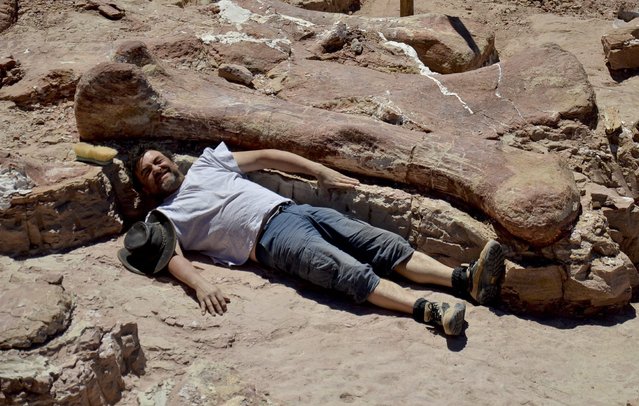 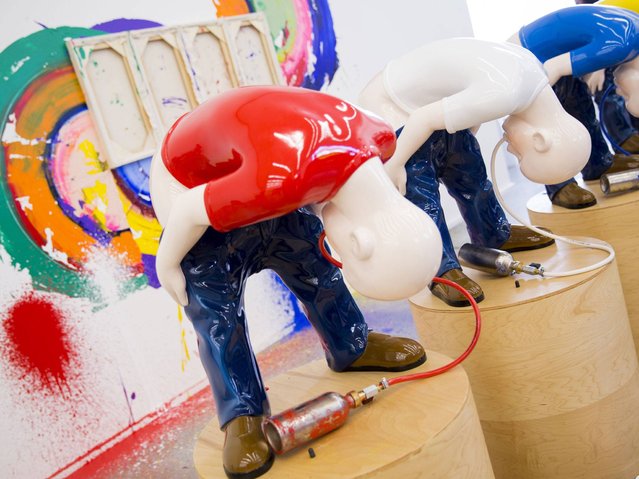 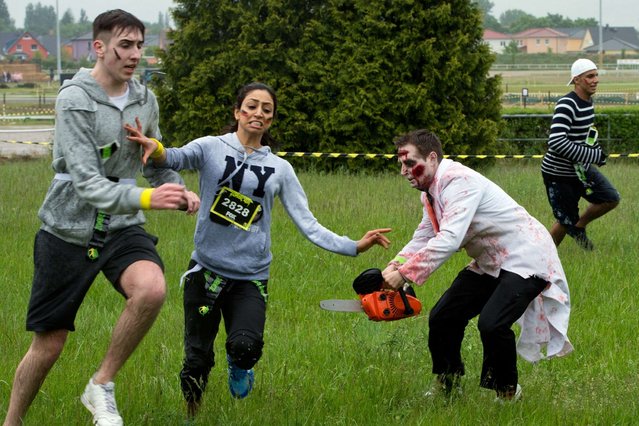 Participants costumed as zombies try to catch hobby runners during the so-called Zombie-Run at the harness racing track Karlshorst in Berlin, Germany, 18 May 2014. The runners carry small flags in their belts which they have to get safely across the finishing line while the zombies try to steal them. The sporting event is based on the US television series “The Walking Dead”. (Photo by Soeren Stache/DPA) 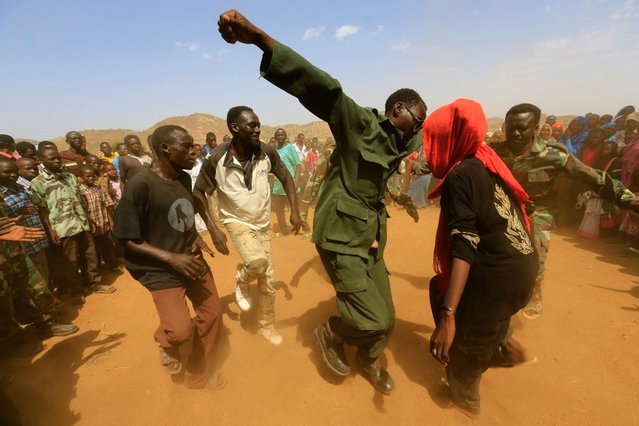 Military personnel dance with supporters after claiming to have recaptured the Daldako area, outside the military headquarters in Kadogli, Sudan, from rebels, on May 21, 2014. (Photo by Mohamed Nureldin/Reuters) 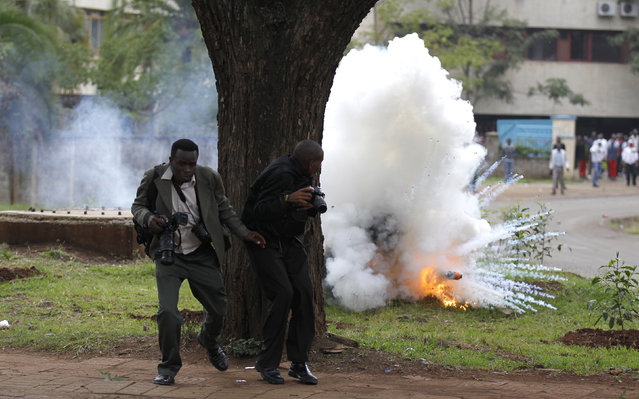 Photojournalists run away from a flare after police released teargas in a bid to disperse rioting university students in Kenya's capital Nairobi May 20, 2014. Public university students started their protests, which are against the planned hiking of fees and lowering of maximum loan awarded to students by the Higher Education Loans Board, where police engaged the students in running battles at the main campus, local media reported. (Photo by Thomas Mukoya/Reuters) 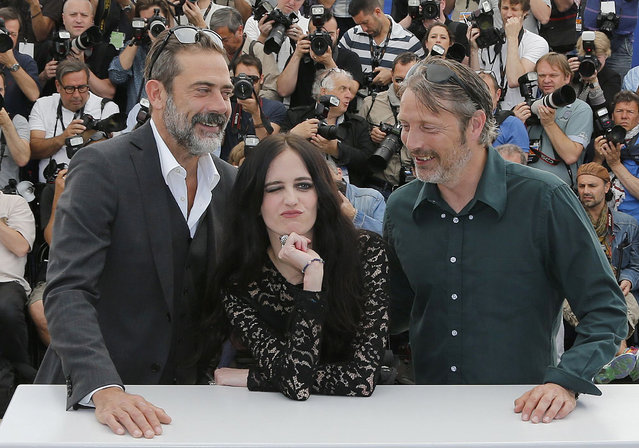 (L-R) Cast members Jeffrey Dean Morgan, Eva Green and Mads Mikkelsen pose during a photocall for the film “The Salvation” out of competition at the 67th Cannes Film Festival in Cannes May 17, 2014. (Photo by Regis Duvignau/Reuters) 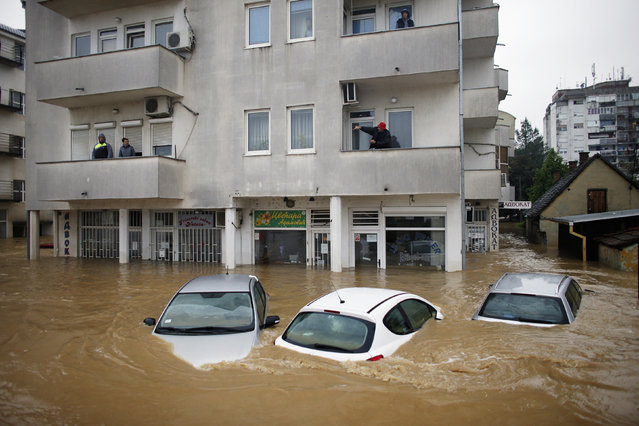 People stand in their apartments as they wait to be evacuated in the flooded town of Obrenovac, southwest of Belgrade, May 17, 2014. (Photo by Marko Djurica/Reuters) 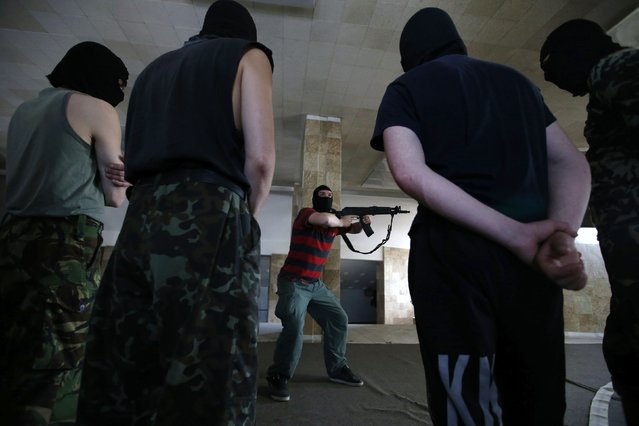 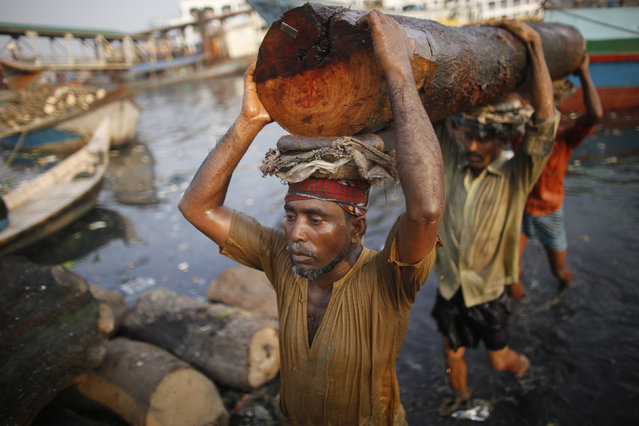 Workers carry a log at a timber factory by the river Buriganga in Dhaka May 18, 2014. (Photo by Andrew Bira/Reuters) 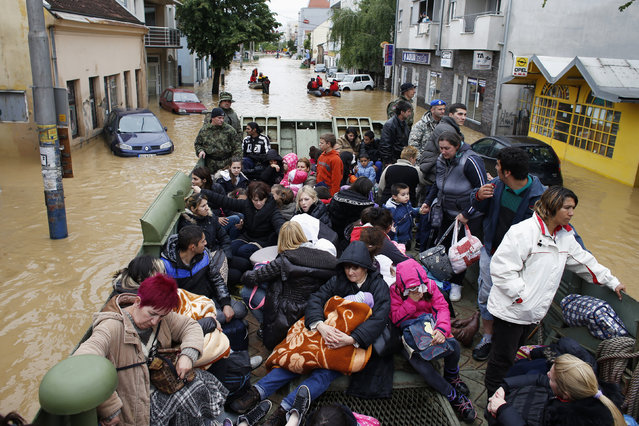 Serbian army soldiers evacuate people in an amphibious vehicle in the flooded town of Obrenovac, southwest of Belgrade, May 17, 2014. Emergency services pulled seven dead bodies from flooded homes in Bosnia on Saturday and soldiers rushed to free hundreds of people stranded in a school in Serbia during the worst floods to hit the Balkans in over a century. (Photo by Marko Djurica/Reuters) 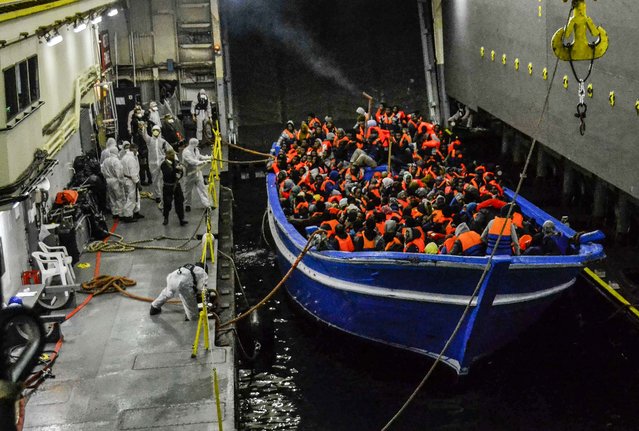 In this photo released by the Italian Navy, a fishing boat filled with migrants is towed into the Navy ship San Giorgio headed to Sicily, on May 22, 2014. (Photo by Italian Navy) 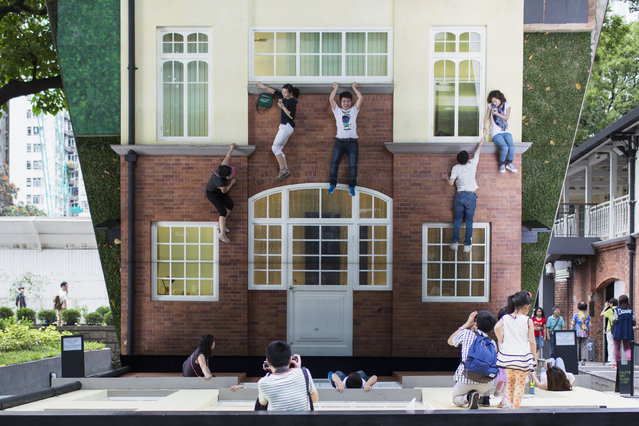 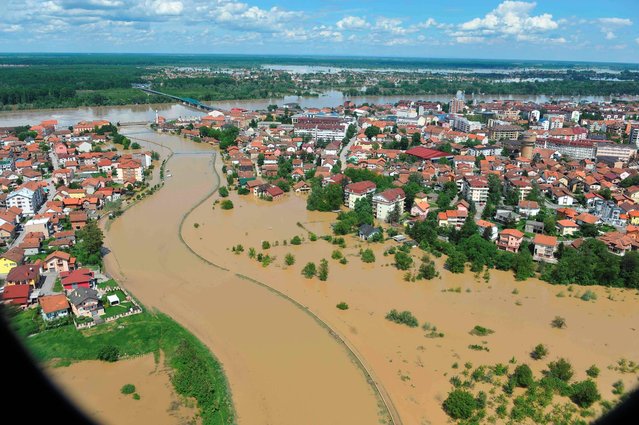 This image taken on taken Sunday, May 18, 2014 and made available by the Bosnia Army shows an aerial view of the flooded area near the Bosnian town of Brcko along the river Sava, 200 kms north of Bosnian capital of Sarajevo. Three months' worth of rain fell on the Balkan region in three days, producing the worst floods since rainfall measurements began 120 years ago. (Photo by AP Photo/Bosnia Army) A theatrical war horse from a stage play walks through the Soldiers Charity garden to mark the centenary of World War I at the Chelsea Flower Show in London, Britain, 19 May 2014. The flower exhibition will run from 20 to 24 May. (Photo by Andy Rain/EPA) 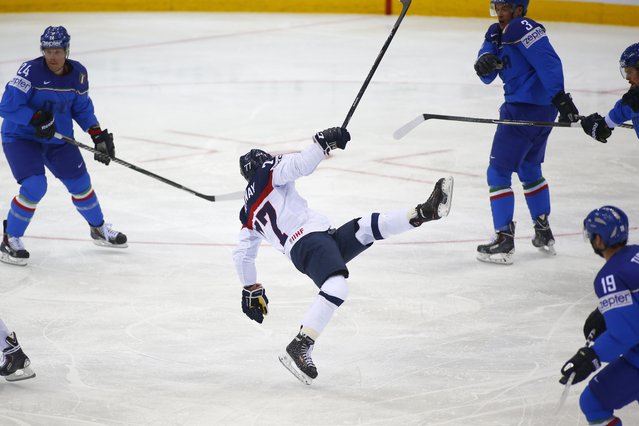 Slovakia's Martin Reway, center, falls during the Group A preliminary round match against Italy at the Ice Hockey World Championship in Minsk, Belarus, Saturday, May 17, 2014. (Photo by Sergei Grits/AP Photo) 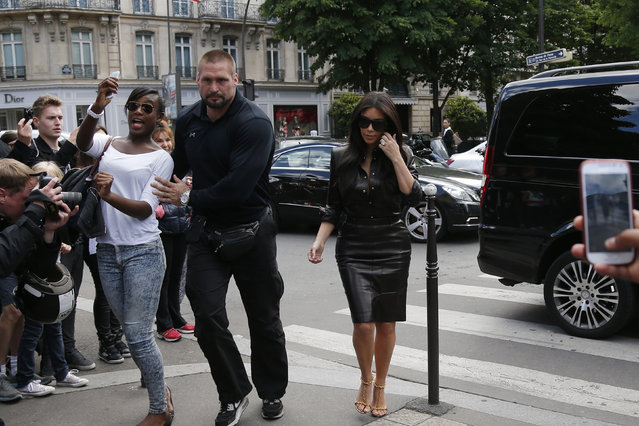 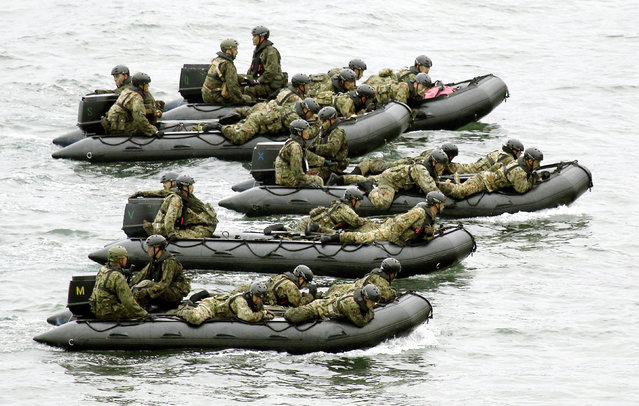 Japan Self-Defense Force (JSDF) soldiers ride rubber boats on the sea approach to Eniyabanare Island during a military drills, off Setouchi town on the southern Japanese island of Amami Oshima, Kagoshima prefecture, in this photo taken by Kyodo May 22, 2014. Japanese troops drifted onto a remote, uninhabited islet on Thursday in drill to simulate the recapture of an island. (Photo by Reuters/Kyodo) 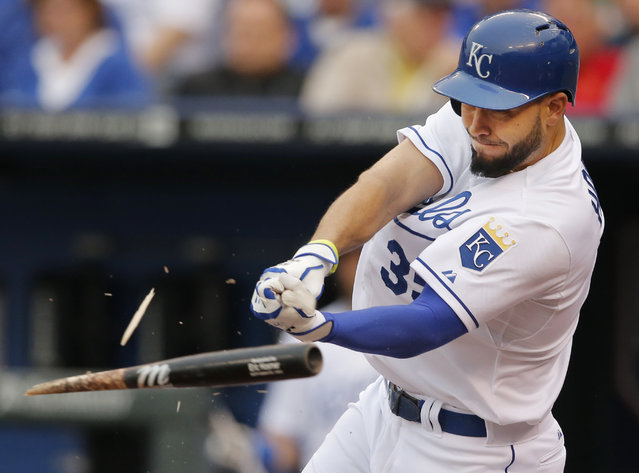