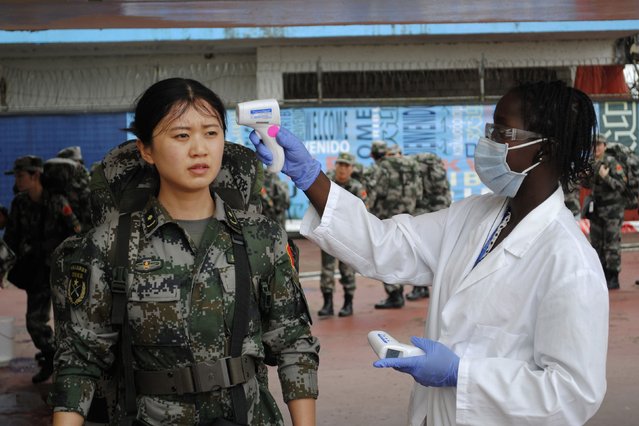 A Chinese military health worker, part of a delegation sent by China to help in the fight against Ebola, has her temperature taken as she arrives at Roberts airport outside Monrovia November 15, 2014. China is dispatching health experts and medical staff to Liberia and Sierra Leone in response to U.N. calls for a greater global effort to fight the deadly Ebola virus in West Africa. (Photo by James Giahyue/Reuters) 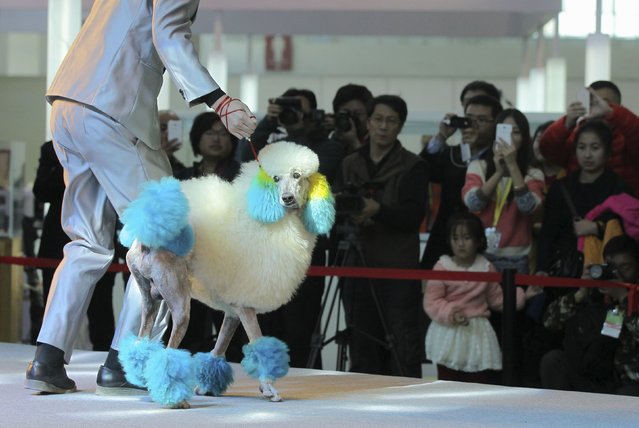 Visitors look as a man leading a poodle with coloured fur take part in a performance during the 18th China International Pet Show in Beijing November 17, 2014. (Photo by Reuters/China Daily) 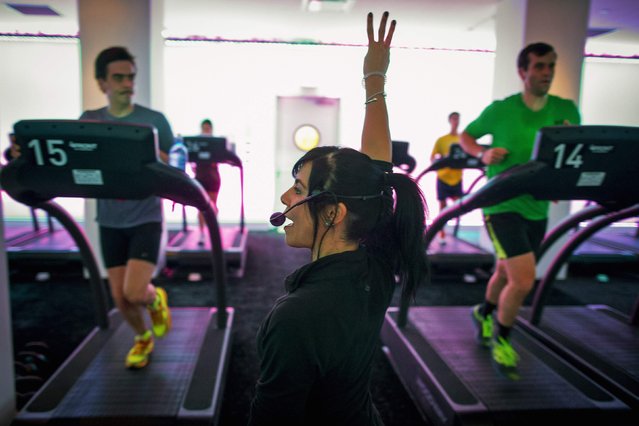 Jessica Desmond, an instructor at the Mile High Run Club (MHRC), leads a class in a Manhattan borough of New York November 14, 2014. A New York City fitness studio is following fast on the heels of the indoor cycling, or spin, craze by beckoning outdoor runners to come in from the cold for group treadmill classes. Equipped with 30 treadmills, lighting evocative of dusk or dawn, and group training designed to hone the skills of marathoners and newbies alike, fitness experts say MHRC – billed as the first treadmill studio – might do a bit to burnish the image of the most used, least glamorous, of gym cardio machines. (Photo by Brendan McDermid/Reuters) 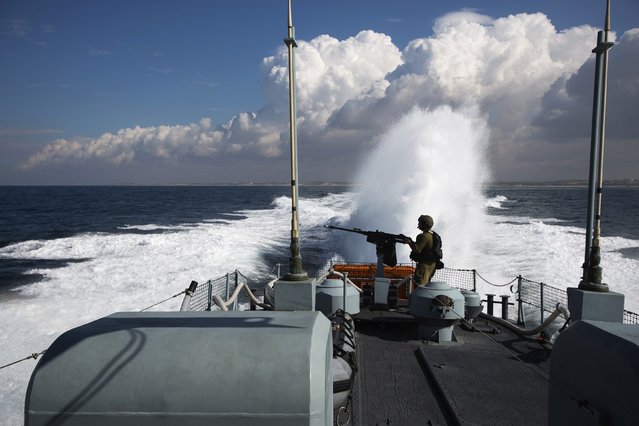 An Israeli soldier stands beside a weapon aboard a patrol boat during a naval tour for the media off the Ashdod port November 17, 2014. (Photo by Amir Cohen/Reuters) 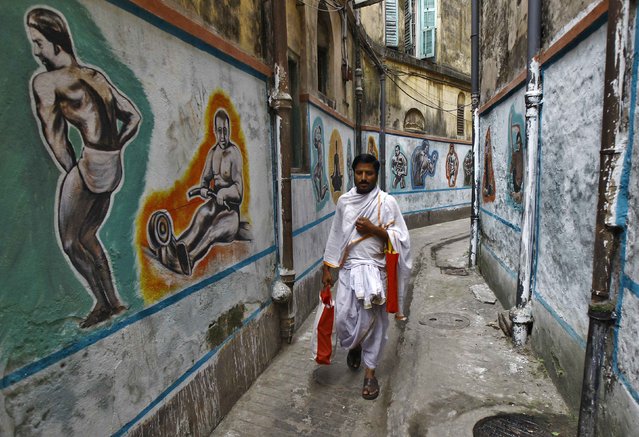 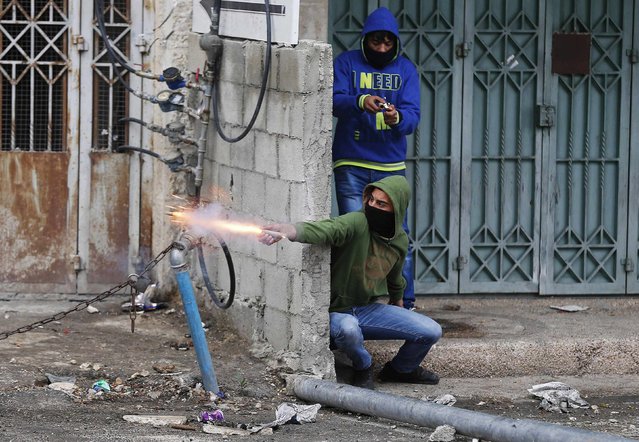 A Palestinian protester releases fireworks during clashes with Israeli troops in the West Bank town of Abu Dis near Jerusalem November 17, 2014. A Palestinian bus driver was found hanged inside his vehicle on Monday, an incident Israeli police described as a suicide but which the driver's family said they believed was an attack. Israeli police said the evidence suggested al-Ramouni had committed suicide, but rumors quickly spread in the Palestinian media that he had been killed by Jewish assailants, fuelling tension and violence in the divided city. (Photo by Ammar Awad/Reuters) 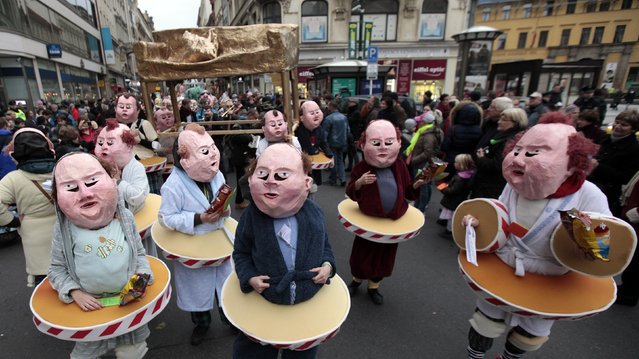 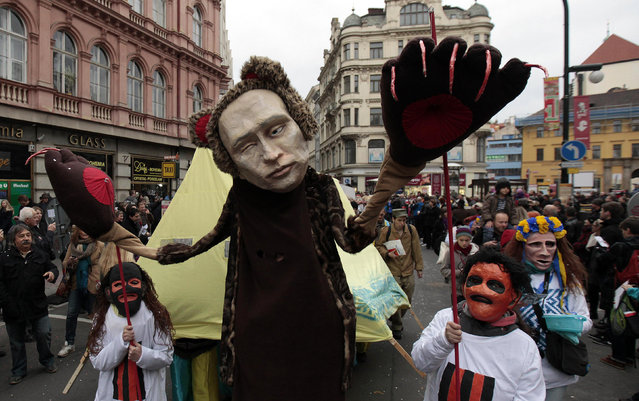 People, one wearing a mask depicting Russian President Vladimir Putin, march through the city center to commemorate the 25th anniversary of the Velvet Revolution in Prague November 17, 2014. (Photo by David W. Cerny/Reuters) 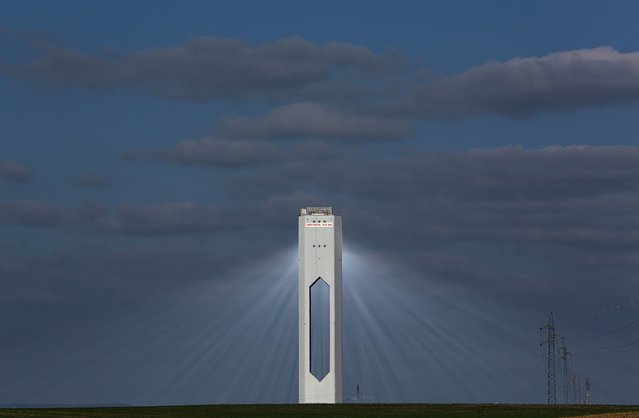 A tower at Abengoa solar plant at “Solucar” solar park is seen in Sanlucar la Mayor, near the Andalusian capital of Seville November 17, 2014. Shares in Spanish renewable energy and engineering firm Abengoa rebounded on Monday – after falling sharply last week – after the company gave details of how it accounted for debt and set new leverage targets for 2014 and 2015. (Photo by Marcelo del Pozo/Reuters) 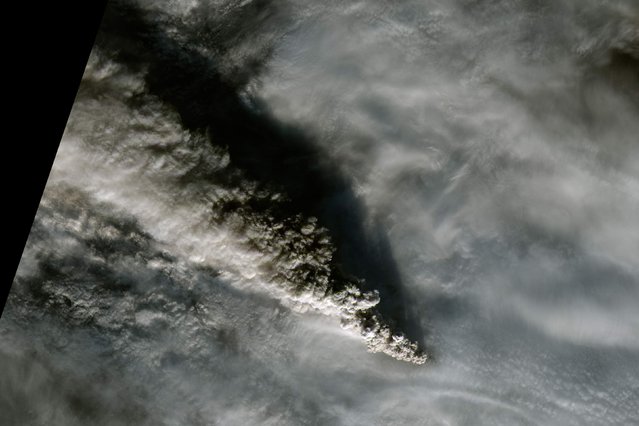 A plume of smoke from Alaska's Pavlof volcano on the lower Alaska peninsula is pictured in this November 15, 2014 NASA handout satellite image. By November 15, Pavlof was lofting ash plumes to an altitude of 30,000 feet (9 kilometers), high enough to disrupt commercial airline flights. (Photo by Reuters/NASA) 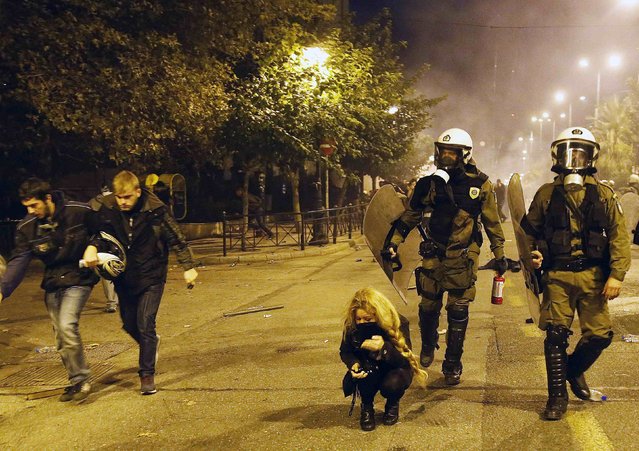 A protester reacts after inhaling tear gas during scuffles with the police at a rally marking the 41st anniversary of a 1973 student uprising against a U.S. backed military dictatorship in then ruling Greece, near the U.S. embassy in Athens November 17, 2014. (Photo by Yannis Behrakis/Reuters) 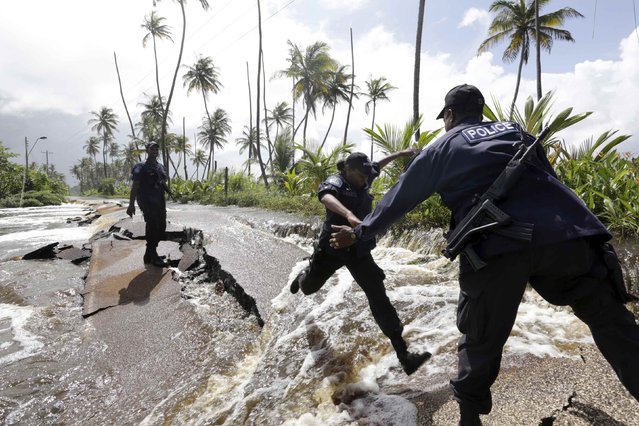 Police Constable Patrice Clarke jumps over a collapsed portion of Manzanilla Mayaro Road, as flood waters continue to flow from the adjoining Nariva swamp basin following two days of rainfall in the country, in Manzanilla on Trinidad's East coast November 17, 2014. According to local authorities, more than 80 per cent of the road has been submerged by over a foot of water for the past two days, destroying the road's surface as it roars to the seafront. (Photo by Andrea De Silva/Reuters) 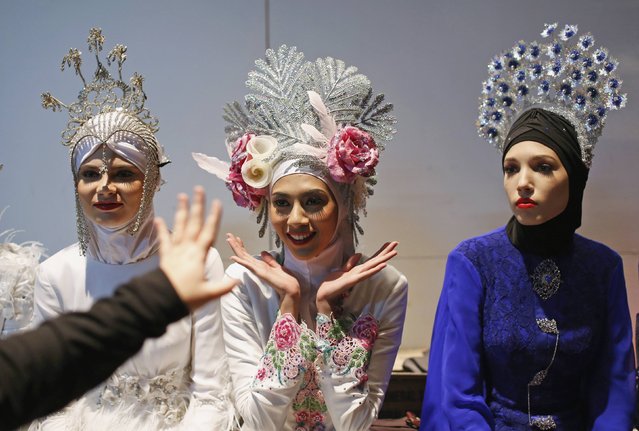 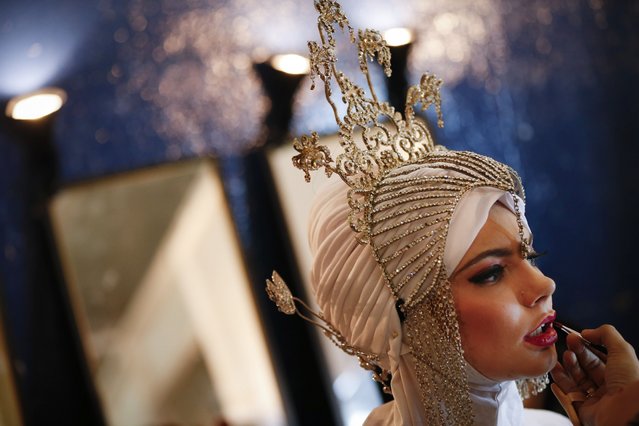 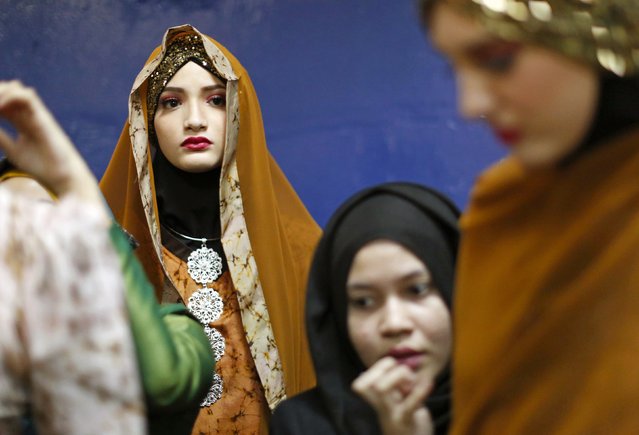 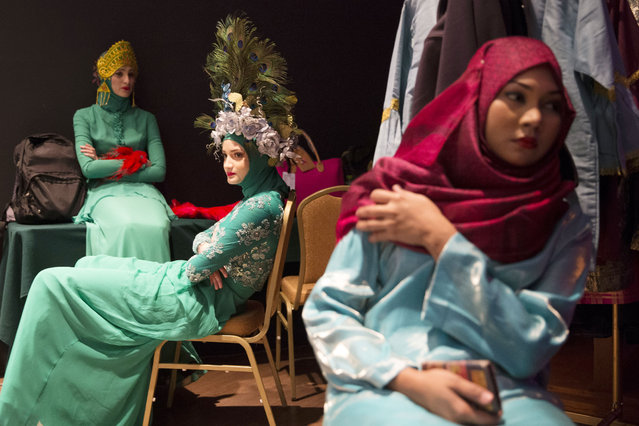 Models wear creations from the Calvin Thoo collection as they wait backstage during the Islamic Fashion Festival in Kuala Lumpur, Malaysia on Tuesday, November 18, 2014. (Photo by Vincent Thian/AP Photo) 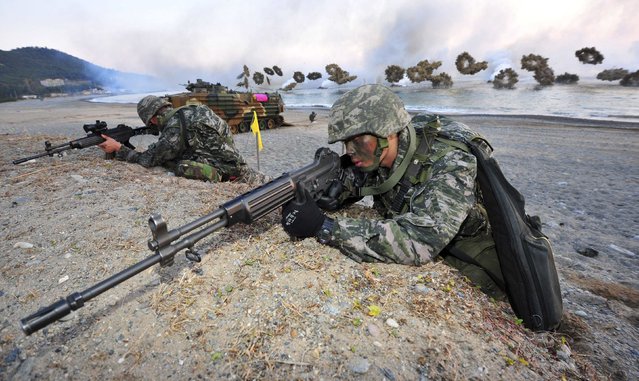 South Korean Marines take part in a landing operation which is a part of annual military exercise “Hokuk”, on a beach in Pohang November 18, 2014. (Photo by Reuters/News1) 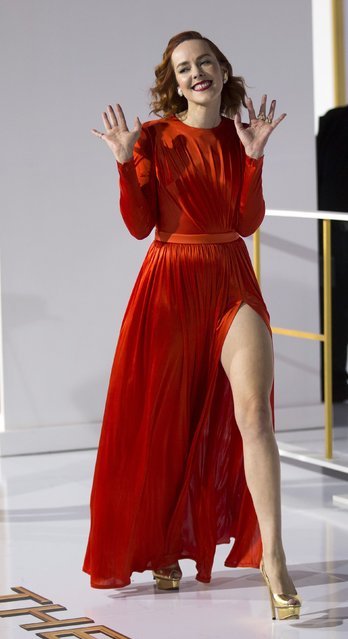 Cast member Jena Malone poses at the premiere of “The Hunger Games: Mockingjay – Part 1” in Los Angeles, California November 17, 2014. The movie opens in the U.S. on November 21. (Photo by Mario Anzuoni/Reuters) 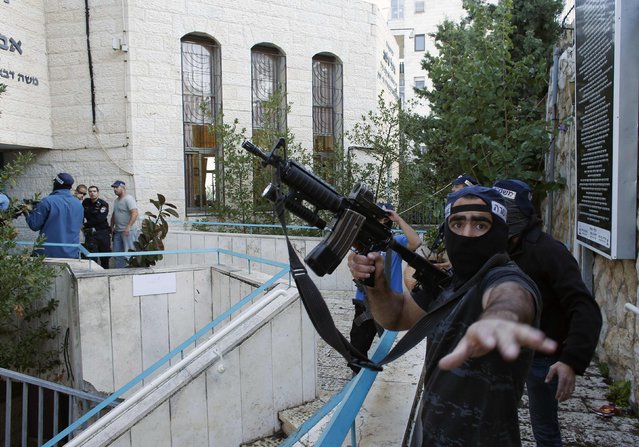 An Israeli police officer gestures as he holds a weapon near the scene of an attack at a Jerusalem synagogue November 18, 2014. Two suspected Palestinian men armed with axes and knives killed four people in a Jerusalem synagogue on Tuesday before being shot dead by police, Israeli police and emergency services said, the deadliest such attack in the city in years. (Photo by Ronen Zvulun/Reuters) 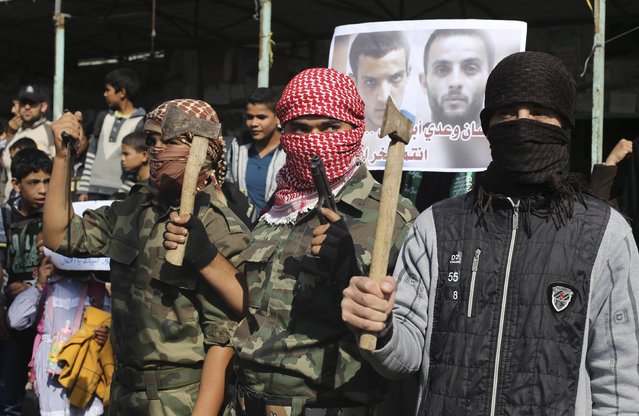 Masked Palestinians hold axes and a gun as they celebrate with others an attack on a Jerusalem synagogue, in Rafah in the southern Gaza Strip November 18, 2014. Two Palestinians armed with a meat cleaver and a gun killed four people in a Jerusalem synagogue on Tuesday before being shot dead by police, the deadliest such incident in six years in the holy city amid a surge in religious conflict. (Photo by Ibraheem Abu Mustafa/Reuters) 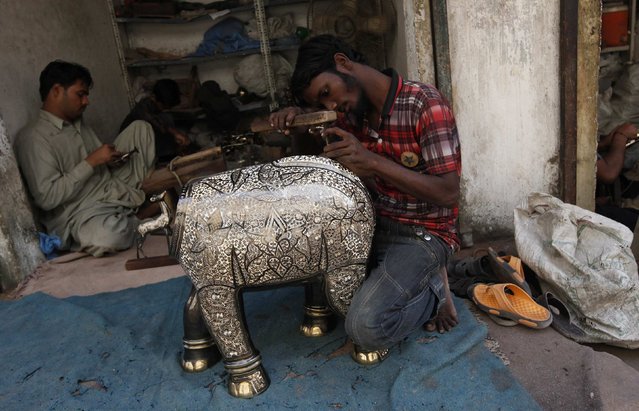 An artisan carves patterns on a brass elephant sculpture at a handicraft workshop along a street in Karachi November 18, 2014. (Photo by Akhtar Soomro/Reuters) 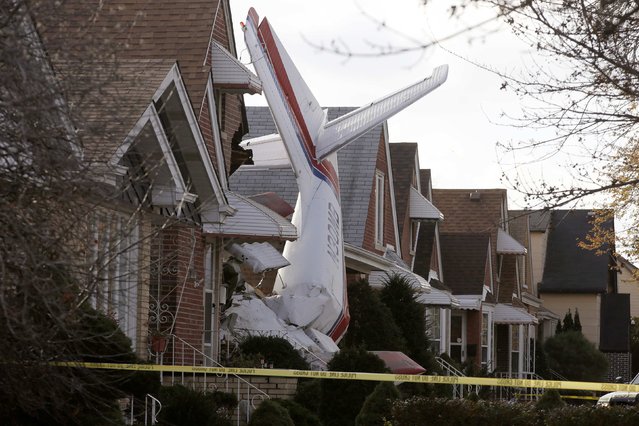 A small cargo plane is seen crashed into the side of a home in Chicago, November 18, 2014. The occupants of the home escaped uninjured after the crash at 2:42 a.m. CST but Chicago police said they did not have information about potential injuries sustained by the pilot, who authorities said was the only occupant of the plane. (Photo by Andrew Nelles/Reuters) 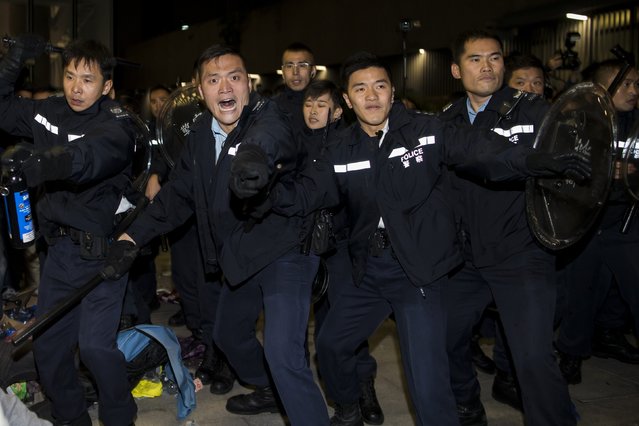 Police shout to protesters as they try to break into the Legislative Council in Hong Kong early November 19, 2014. A small group of Hong Kong pro-democracy protesters broke into the city's legislature via a side door early on Wednesday, and police stopped others storming the building as tensions jumped following a period of calm. (Photo by Tyrone Siu/Reuters) 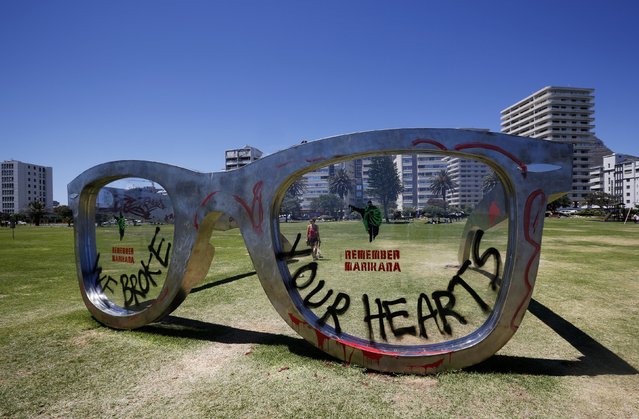 Graffiti covers a sculpture in the form of a giant pair of spectacles on Cape Town's Sea Point Promenade, November 18, 2014. Inspired by Nelson Mandela, the work “Perceiving Freedom” by artist Michael Elion has stirred some controversy in the local media. While popular with visitors to the promenade, some critics have questioned the association of Mandela's legacy with commercial sponsors. (Photo by Mike Hutchings/Reuters) 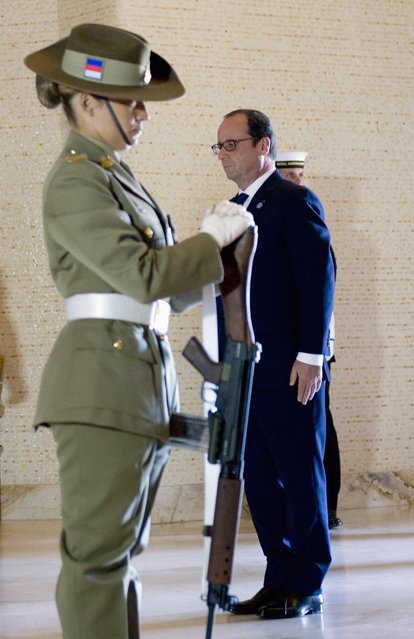 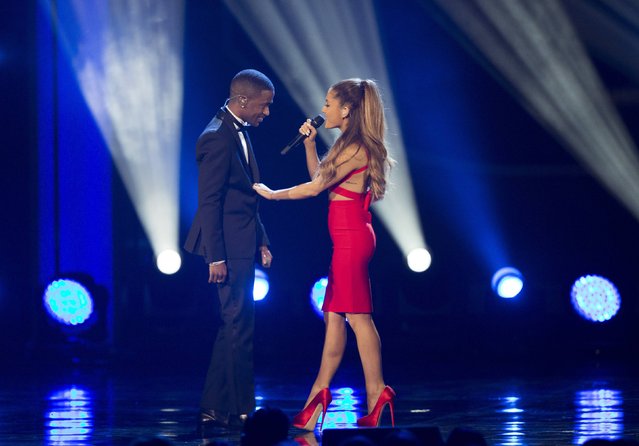 Singers Ariana Grande and Big Sean perform during the taping of “A Very GRAMMY Christmas” at the Shrine Auditorium in Los Angeles, California November 18, 2014. The show airs December 5. (Photo by Mario Anzuoni/Reuters) 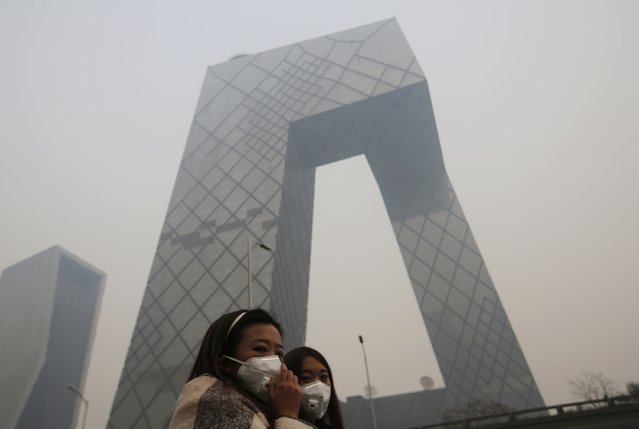 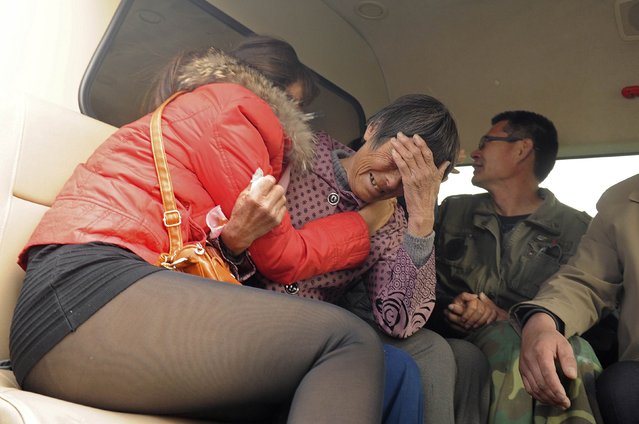 Relatives of kindergarten children, who died after the van they were travelling in ran into a truck, cry in Penglai, Shandong province, November 19, 2014. According to local media, at least 12 people were killed in the accident on Wednesday morning. (Photo by Reuters/Stringer) 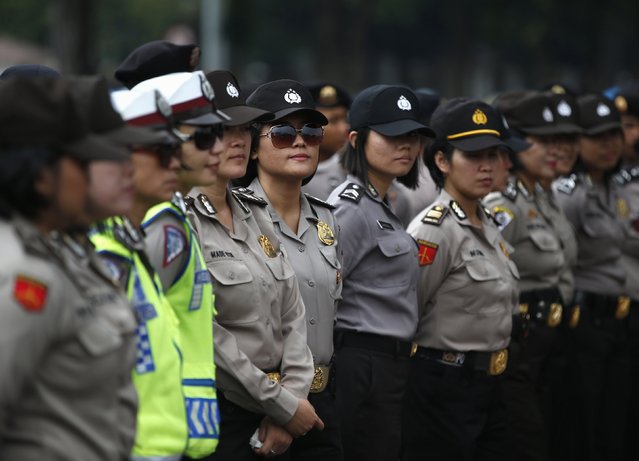 Indonesian police officers stand guard outside the presidential palace during a protest against the recent fuel price hike in Jakarta November 19, 2014. (Photo by Darren Whiteside/Reuters) 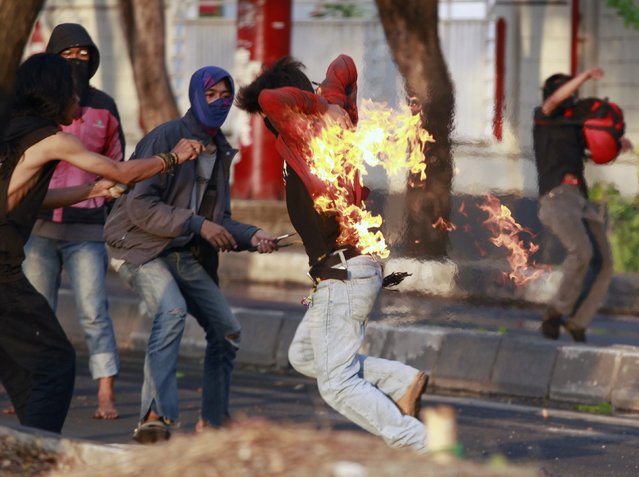