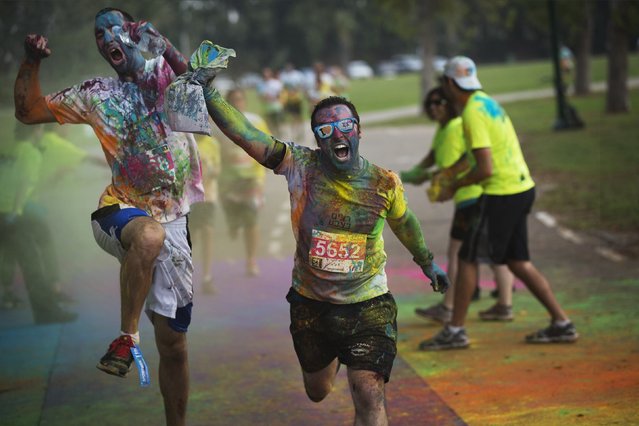 Participants in an amateur “Running in Color” event approach the finish line of a five kilometre (three mile) race in Tel Aviv, November 14, 2014. Inspired by the Hindu Holi festival, the race involved participants running along a course dotted with locations where coloured powders were thrown over the runners. The event was held to raise awareness about Post Traumatic Stress Disorder caused by conflict in the country. (Photo by Finbarr O'Reilly/Reuters) 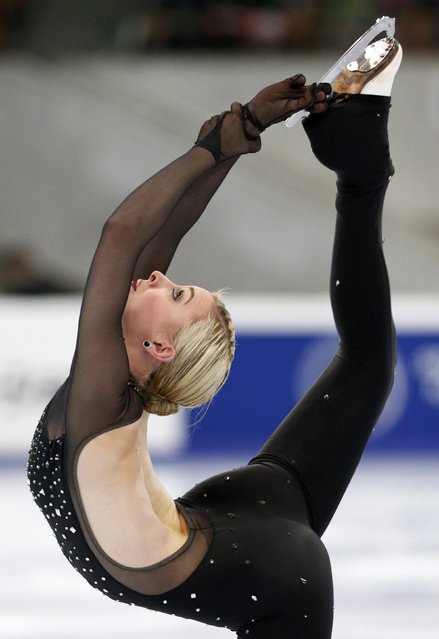 Ashley Cain of the U.S. performs during the ladies short program at the Rostelecom Cup ISU Grand Prix of Figure Skating in Moscow November 14, 2014. (Photo by Grigory Dukor/Reuters) 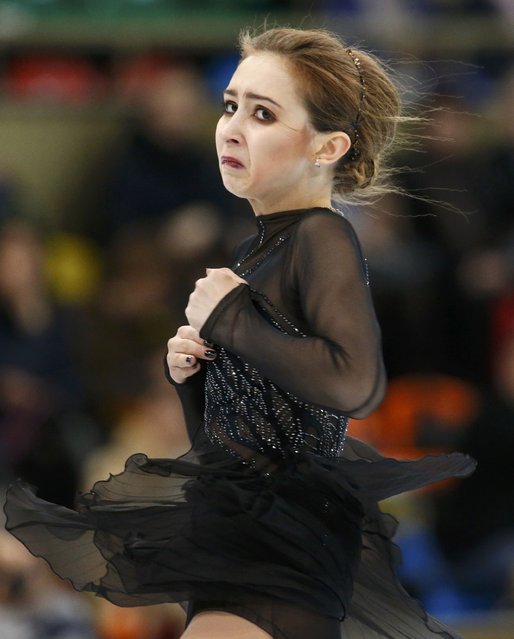 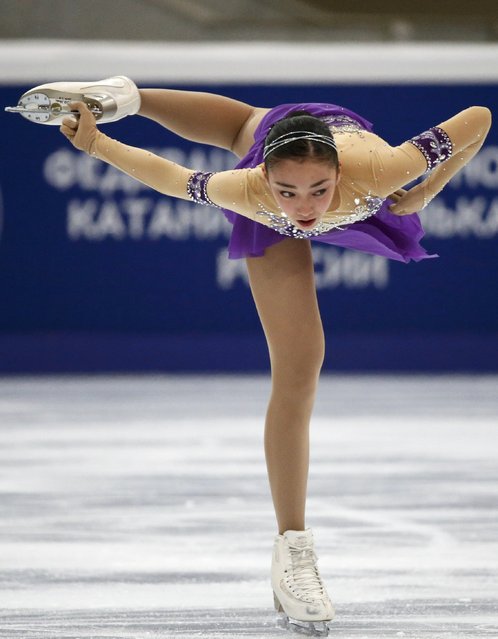 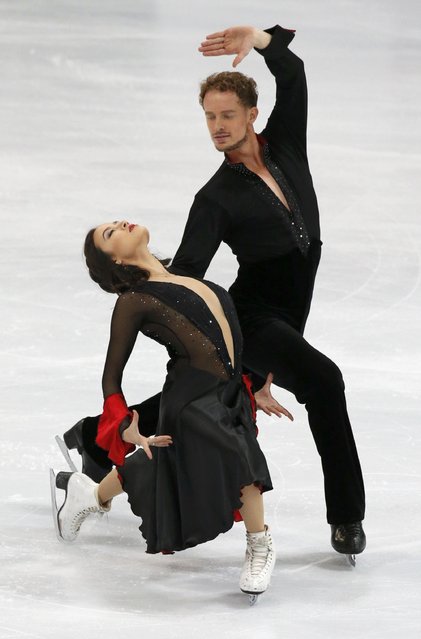 Madison Chock and Evan Bates of the U.S. perform during the ice dance short program at the Rostelecom Cup ISU Grand Prix of Figure Skating in Moscow November 14, 2014. (Photo by Grigory Dukor/Reuters) 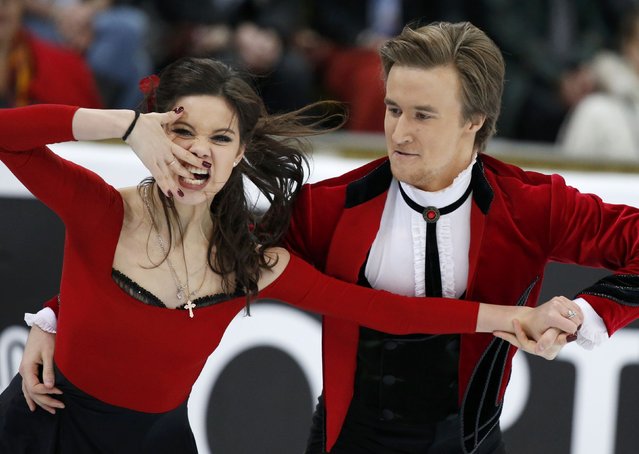 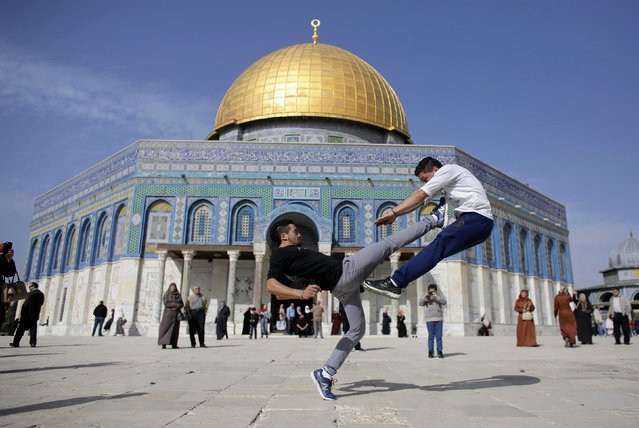 The Dome of the Rock is seen in the background as Palestinian youths practice their parkour skills during Friday prayers in Jerusalem's Old City November 14, 2014. Israel and the Palestinians have pledged to take concrete steps to calm tensions around Jerusalem's holiest site, U.S. Secretary of State John Kerry said on Thursday after talks in the Jordanian capital. (Photo by Ammar Awad/Reuters) 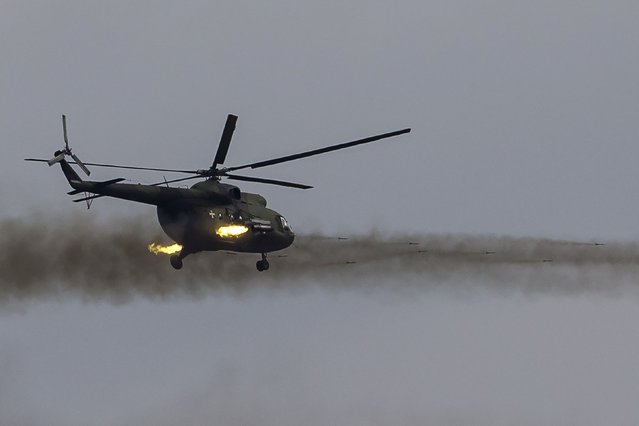 A Serbian Mi-8 helicopter gunship fires unguided rockets on targets during a training exercise in the village of Nikinci, west from Belgrade, November 14, 2014. Russian soldiers parachuted into open fields in western Serbia on Friday as part of an unprecedented joint military drill that has stirred controversy in the European Union candidate-country given the West-Russia standoff over Ukraine. The one-day anti-terrorist exercise, around 50 km (30 miles) from Serbia's border with NATO-member Croatia, illustrated the balancing-act Belgrade faces; safeguarding relations with its big-power ally while pursuing closer integration with Europe at a time of deep West-Russia tension. (Photo by Marko Djurica/Reuters) 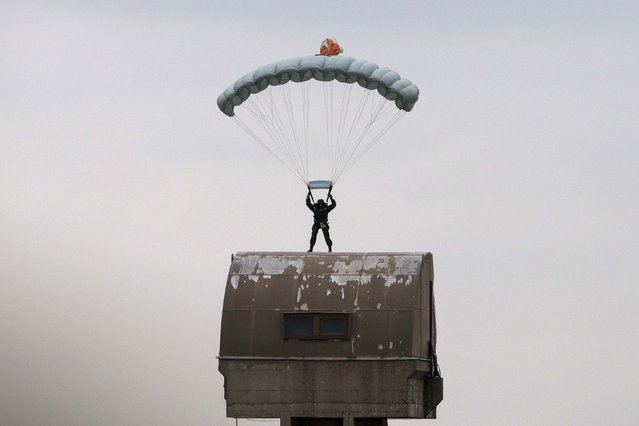 A Russian paratrooper descends to the ground during a training exercise in the village of Nikinci, west from Belgrade, November 14, 2014. (Photo by Marko Djurica/Reuters) 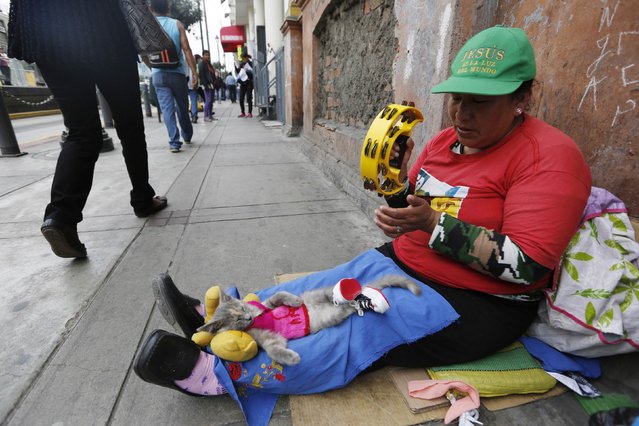 A woman with a kitten on her lap plays the tambourine while asking for money at a street in downtown Lima, November 14, 2014. (Photo by Mariana Bazo/Reuters) 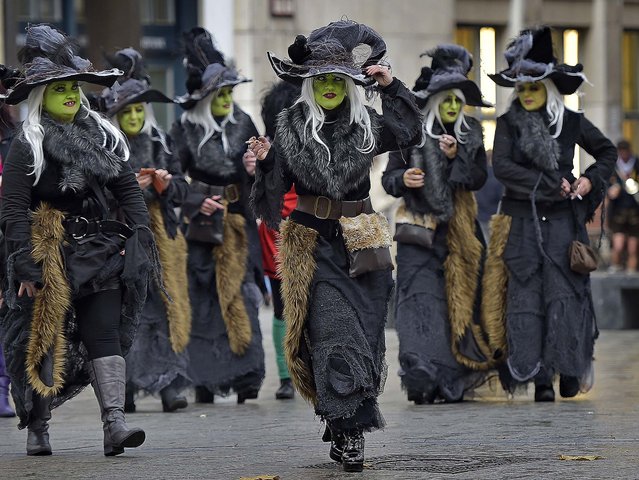 Revellers dressed as witches walk to the traditional start of the carnival season in Cologne, Germany, Tuesday, November 11, 2014. (Photo by Martin Meissner/AP Photo) 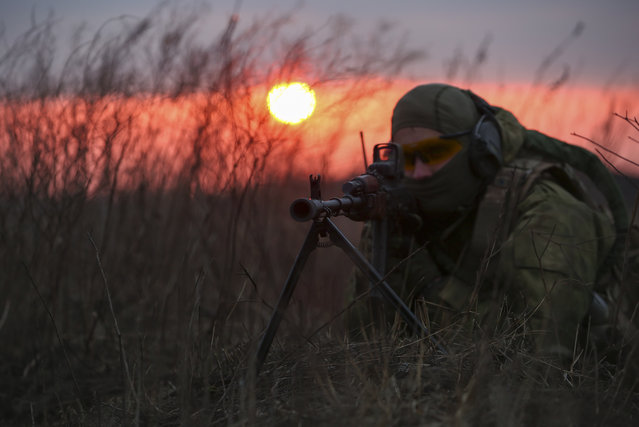 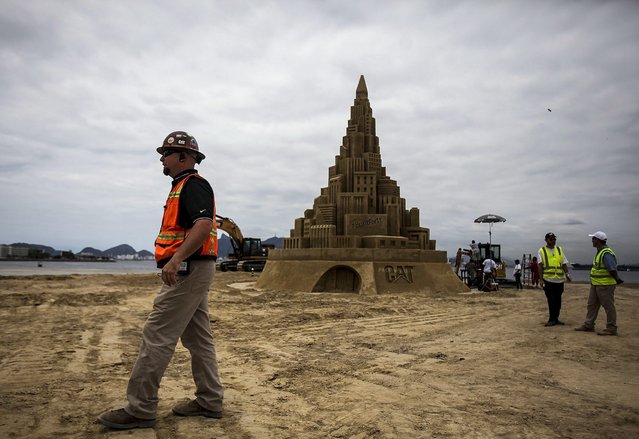 A group of people gather next to a giant sand castle at Niteroi, Rio de Janeiro, Brazil, 11 November 2014. A tractor's maker company seeks to be included in the Guinness records building the world's largest sand castle, beating the last holder of the title, which was 11.63 meters high. (Photo by Antonio Lacerda/EPA) 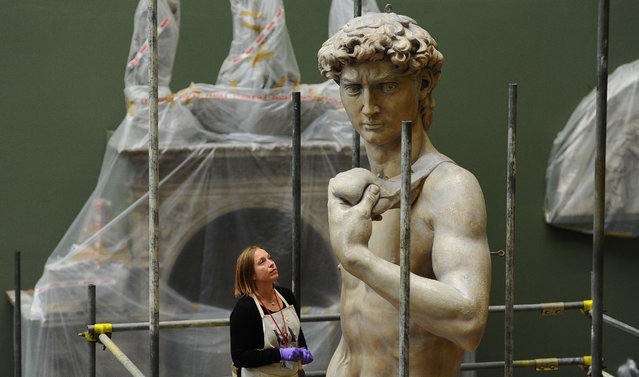 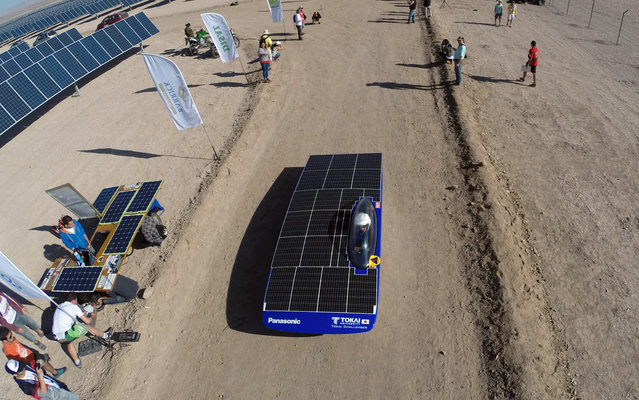 Members of the Japanese team Tokai get ready for the start of the first stage of the Atacama Solar Challenge – a solar car race in the Atacama Desert – in Iquique, some 2000 km north of Santiago, Chile, on November 13, 2014. Twenty teams from five countries are participating in the five-day 1200 km-race. (Photo by Martin Bernetti/AFP Photo) 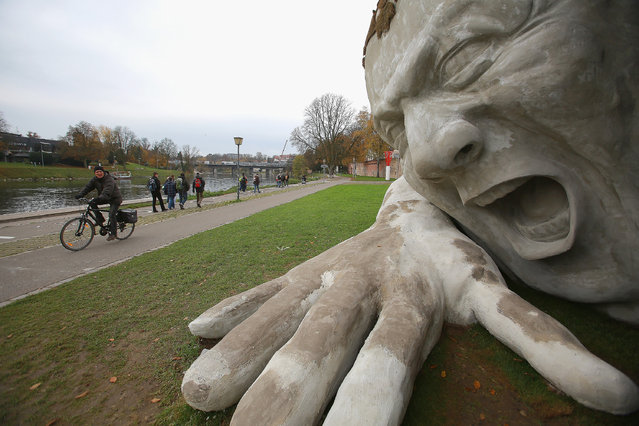 People walk and cycle past the giant sculpture etitled “Popped up”, on the banks of the Danube River on November 12, 2014 in Ulm, Germany. The giant was made by Ervin Herve-Loranth for the Art Market Budapest 2014 – an international contemporary art fair. The sculpture has been installed to commemorate the 1989 revolution and will be in place until the end of November, at Metzgerturm (butcher tower). (Photo by Alex Quesada/Getty Images) 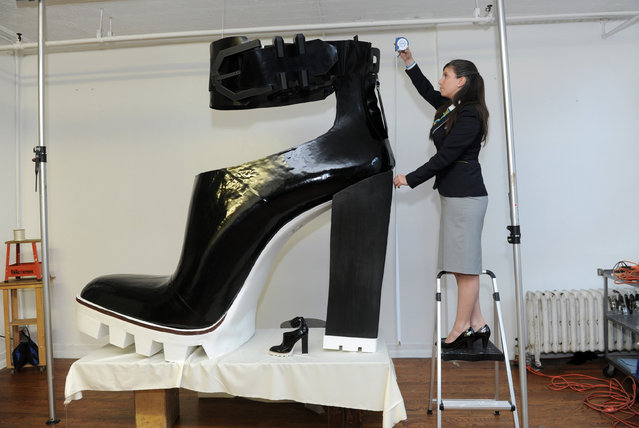 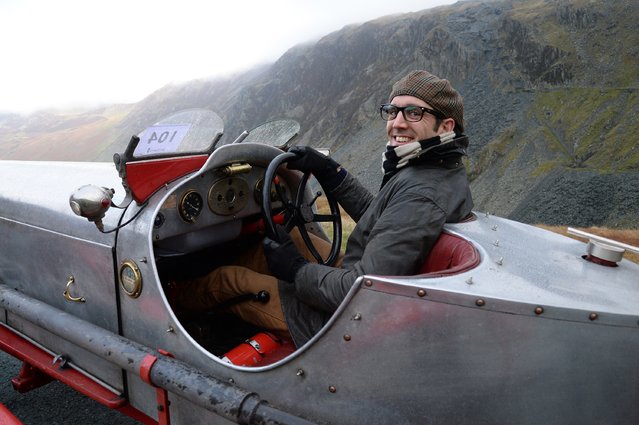 Will Odell in his Riley Redwinger prepares for a vintage car rally stage at the Honister Slate Mine on November 8, 2014 in the Lake District, England. The event, part of the Lakeland Trials, is held annually by the Vintage Sports Car Club and challenges drivers and their machines through hairpin bends and rocky terrain against a backdrop of awe-inspiring scenery. (Photo by Anna Gowthorpe/Getty Images) 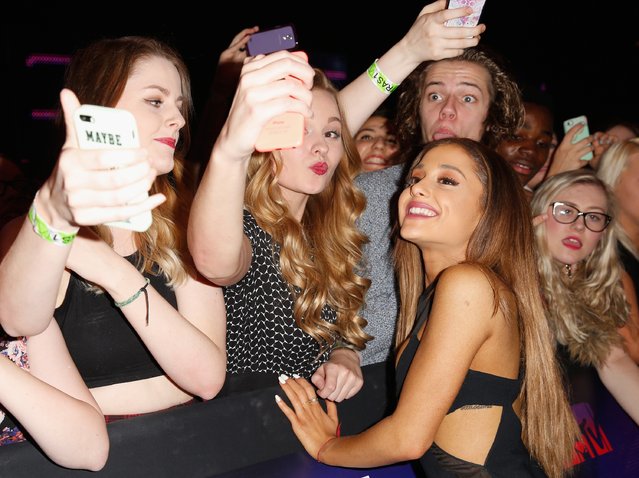 Ariana Grande poses for a selfie with fans as she attends the MTV EMA's 2014 at The Hydro on November 9, 2014 in Glasgow, Scotland. (Photo by Tristan Fewings/Getty Images for MTV) 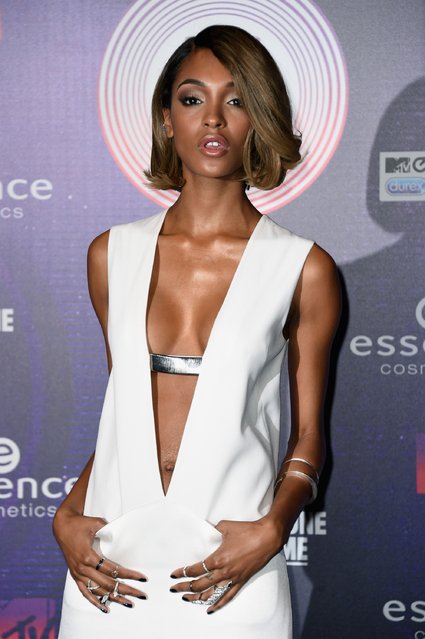 Model Jourdan Dunn attends the MTV EMA's 2014 at The Hydro on November 9, 2014 in Glasgow, Scotland. (Photo by Ian Gavan/Getty Images for MTV) 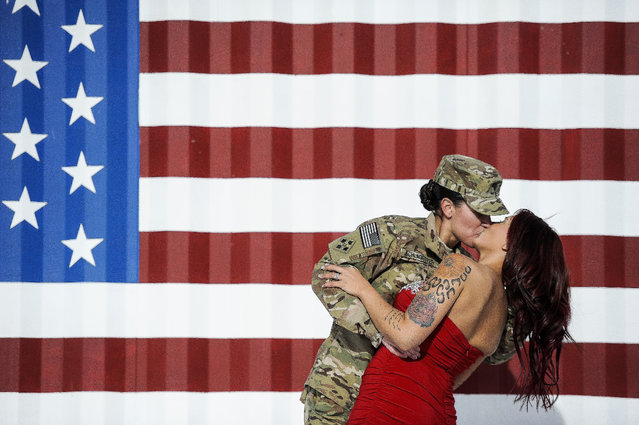 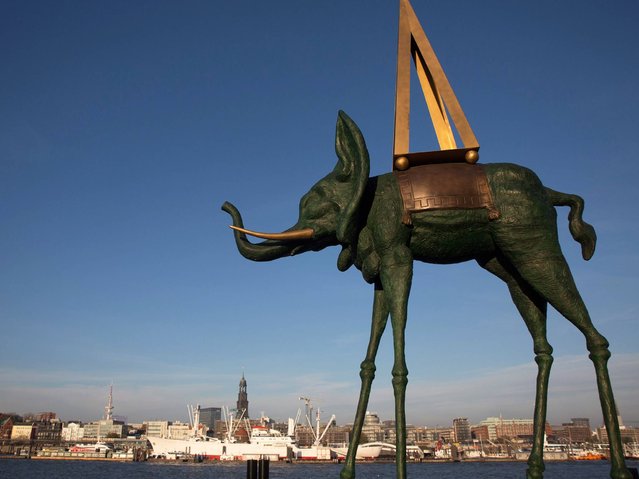 An elephant figure by Spanish artist Salvador Dali stands in front of the entrance of the new Stage Theater at the Elbe river in Hamburg, Germany, 09 November 2014. The theater inaugurated its art collection before its first scheduled performance. (Photo by Axel Heimken/EPA) 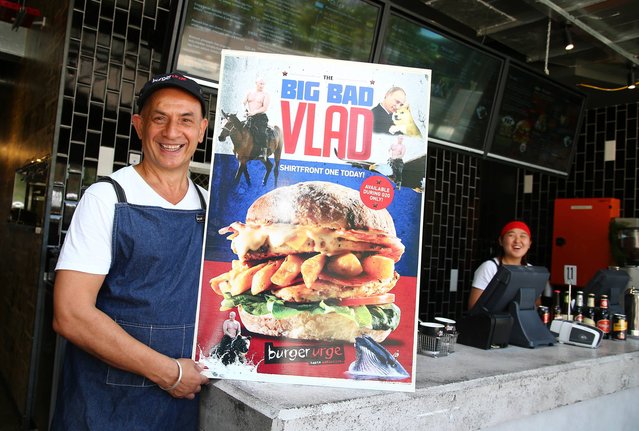 Burger shop owner Balwinder Kalley holds a poster promoting the “Big Bad Vlad” burger which is for sale during this weekend's G-20 summit in Brisbane, Australia, Friday, November 14, 2014. From “The Big Bad Vlad” to the “Obamarama Burger”, local restaurants and pubs are cashing in on the event by offering G-20-themed goodies. (Photo by Tertius Pickard/AP Photo) 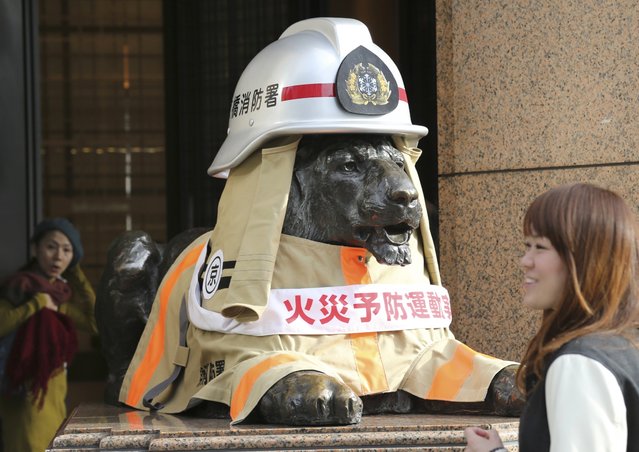 A woman reacts as a bronze lion statue sitting in front of a department store dons a fire fighter costume for the November 9 to 15 fire prevention autumn campaign in Tokyo's Ginza shopping district Monday, November 10, 2014. (Photo by Koji Sasahara/AP Photo) 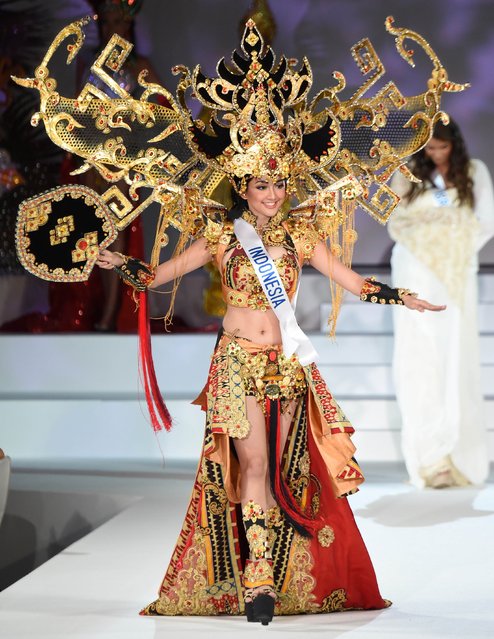 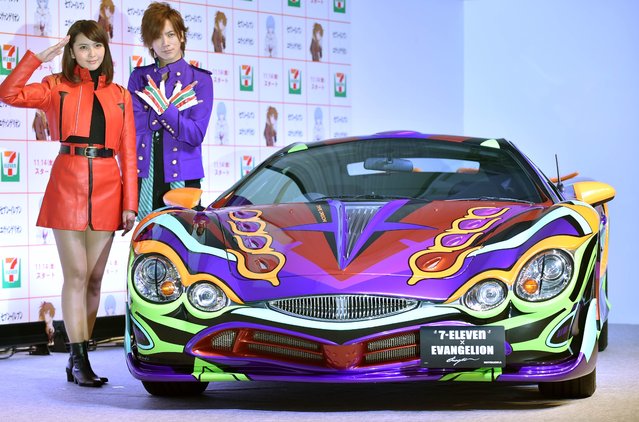 Japanese singer-songwriter Daigo (2nd R) and actress Natsuki Kato (L) stand next to the special car named “Seven-Eleven limited Mitsuoka Motors Evangelion Orochi” during a photo session at a press conference in Tokyo on November 11, 2014. Japanese retail giant Seven & i Holdings Co. announced its collaboration campiagn with popular anime “Evangelion” that the special model limited to one will be launched in Seven-Eleven with a price of 16 million yen (139,000 USD), the highest ever price in commodity dealing. (Photo by Kazuhiro Nogi/AFP Photo) 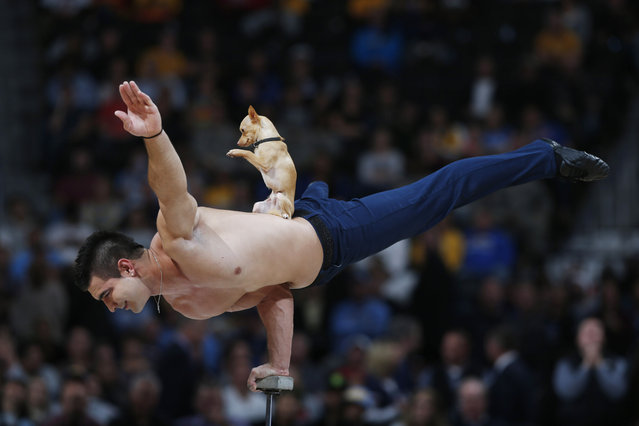 Hand balancer Christian Stoinev performs with his dog, Scooby, on his back during halftime of the Cleveland Cavaliers' 110-101 victory over the Denver Nuggets in an NBA basketball game in Denver on Friday, November 7, 2014. (Photo by David Zalubowski/AP Photo)
Edit Del
15 Nov 2014 12:53:00, post received 0 comments
Publication archive:
←   →
Popular tags:
All tags
Last searches: