A Turkish soldier stands guard at the Syrian border near Suruc, Turkey, late Thursday, September 25, 2014. Turkish Kurds who are arriving by the busload to join the battle against Islamic State militants are increasingly angry at a wary Turkish government trying to prevent them from crossing the border to defend Syrian Kurds from an onslaught that has left countless dead and about 150,000 fleeing into Turkey in recent days. (Photo by Burhan Ozbilici/AP Photo) 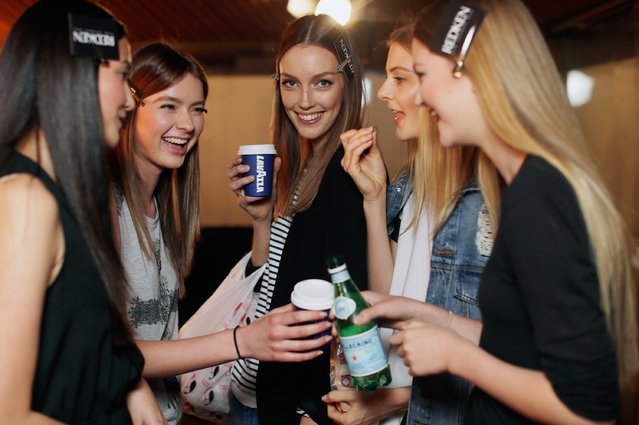 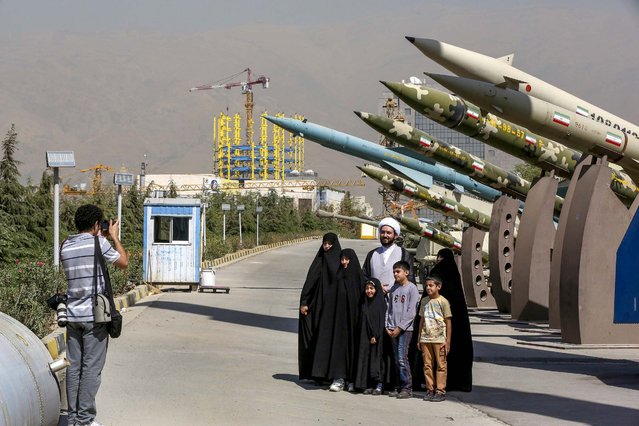 Iranian photographer Arash Khamooshi takes a photograph of cleric Mohammad Kalbasi and his family as they visit an exhibition on the 1980-88 Iran-Iraq war, at a park, northern Tehran, Iran, Thursday, September 25, 2014. Iran begun a week of celebration starting Monday called “Sacred Defense Week” to mark the 34th anniversary of the outset of its war with Iraq which imposed by the Iraqi dictator Saddam Hussein that left about a million casualties on both sides. (Photo by Vahid Salemi/AP Photo) 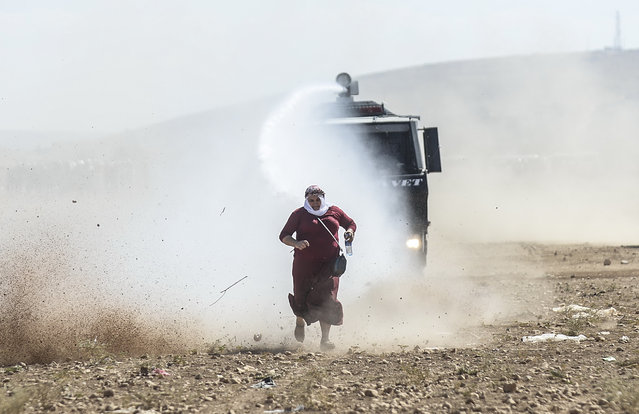 A Kurdish woman runs away from a water cannon near the Syrian border after Turkish authorities temporarily closed the border at the southeastern town of Suruc in Sanliurfa province, on September 22, 2014. Turkey said on September 22 that some 130,000 people had flooded across its border from Syria as Kurdish fighters battled Islamic State group jihadists trying to capture a strategic town. (Photo by Bulent Kilic/AFP Photo) 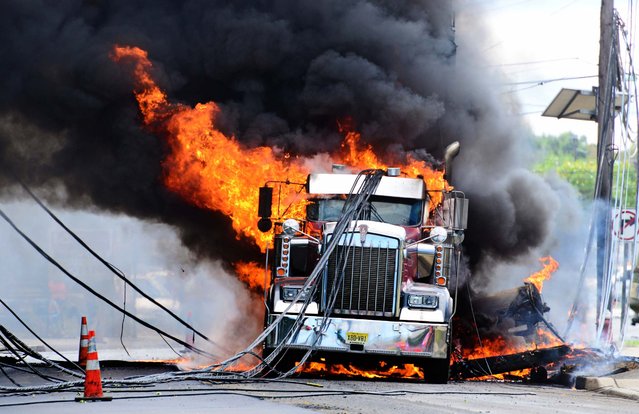 A dump truck burns after it pulled down utility lines in Teterboro, N.J., on September 22, 2014. (Photo by Tariq Zehawi/The Record of Bergen County) 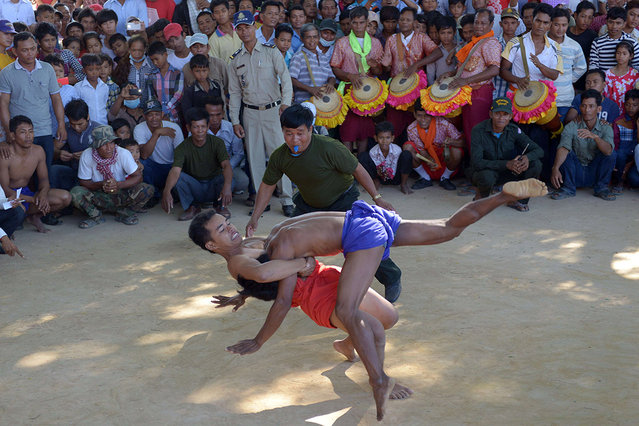 Cambodians compete in a Khmer wrestling match during the Pchum Ben festival, the festival of death, at Vihear Suor village in Kandal province on September 23, 2014. Thousands of Cambodians descended on the small village northeast of the capital on September 23 to cheer on the annual water buffalo race that marks the end of the 15-day festival for the dead. (Photo by Tang Chhin Sothy/AFP Photo) 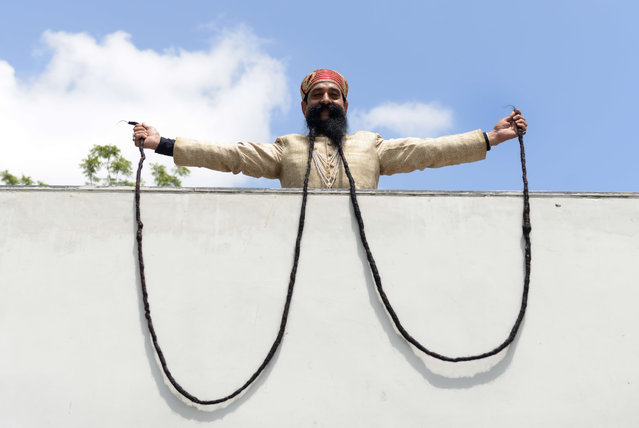 Indian man, Ram Singh Chauhan (61) displays his approximately 18 foot long moustache in Ahmedabad on September 24, 2014. Ram Singh Chauhan is to be felicitated by the Gujarat Lok Kala Foundation for having the World's Longest Moustache, a feat which has been recognised by the Guinness Book of World Records. (Photo by Sam Panthaky/AFP Photo) 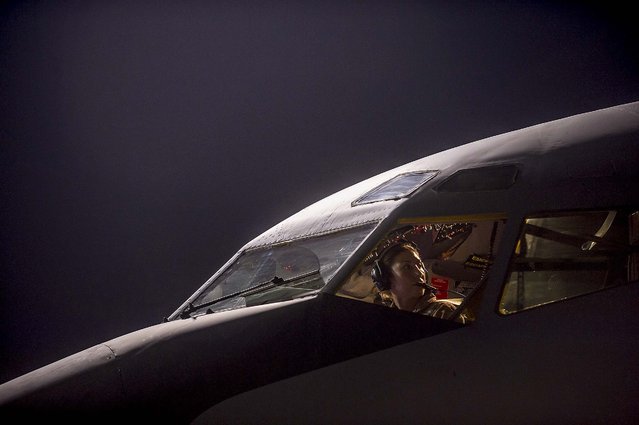 In this photo released today, Maj. Gena Fedoruk, a KC-135 Stratotanker pilot with the 340th Expeditionary Air Refueling Squadron, pre-flights her aircraft before taking off from a base in the U.S. Central Command area of responsibility in support of a mission conducting airstrikes in Syria on September 23, 2014. (Photo by Matthew Bruch/U.S. Air Force) 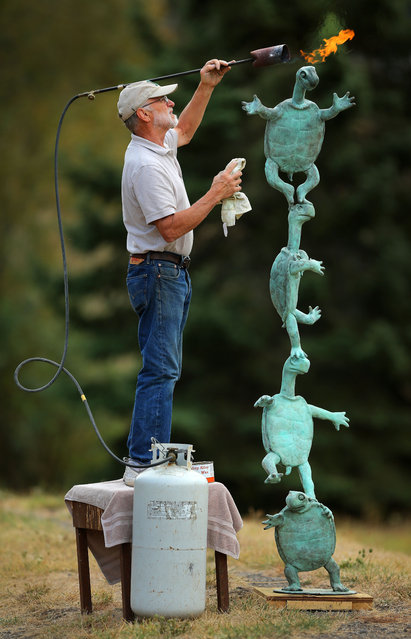 In this photo taken on Monday, September 22, 2014, artist Peter Helzer puts the finishing touches on his whimsical turtle sculpture at his Dexter, Ore. home and studio. The quartet of balancing turtles has been the centerpiece of “Turtle Plaza” at the Oregon Zoo in Portland since 1989. Recently the sculpture was broken, possibly by someone climbing on it, and Helzer took the opportunity to repair and clean it as well as apply a new blue-green patina before it returns Wednesday to the Oregon Zoo for reinstallation. On Monday, Helzer used a torch to dry the piece and then applied a wax finish to protect against graffiti. (Photo by Brian Davies/AP Photo/The Register-Guard) 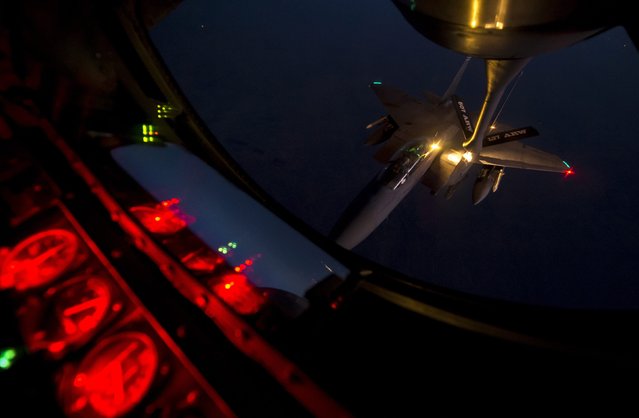 A U.S. Air Force F-15E Strike Eagle receives fuel from a KC-135 Stratotanker over northern Iraq after conducting airstrikes in Syria, in this U.S. Air Force handout photo taken September 23, 2014. These aircraft were part of a large coalition strike package that was the first to strike ISIL targets in Syria. At least 14 Islamic State fighters were killed in air strikes by U.S.-led forces overnight in northeast Syria, a group monitoring the war said on September 25, 2014, and the Syrian air force bombed rebel areas in the west of the country. (Photo by Senior Airman Matthew Bruch/Reuters/U.S. Air Force) 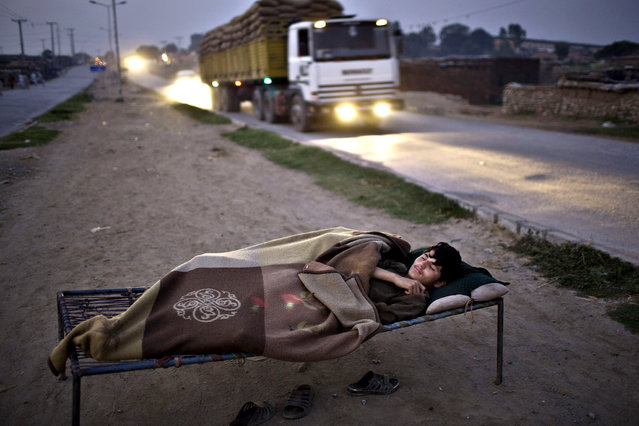 A Pakistani youth, who was Internally Displaced from Pakistan's tribal areas, sleeps on a bed to escape the heat trapped in his mud home, near a wholesale fruit and vegetable market where he works, on the outskirts of Islamabad, Pakistan, early Monday, September 22, 2014. (Photo by Muhammed Muheisen/AP Photo) 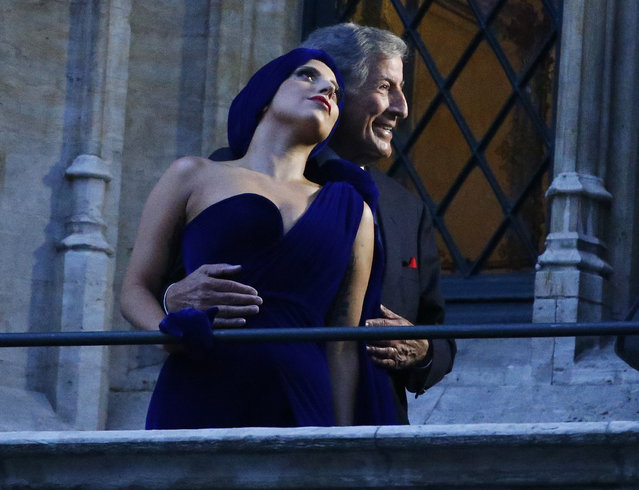 Lady Gaga and Tony Bennett pose on the balcony of Brussels townhall after a news conference, ahead of their concert, at Brussels Grand Place, September 22, 2014. (Photo by Yves Herman/Reuters) 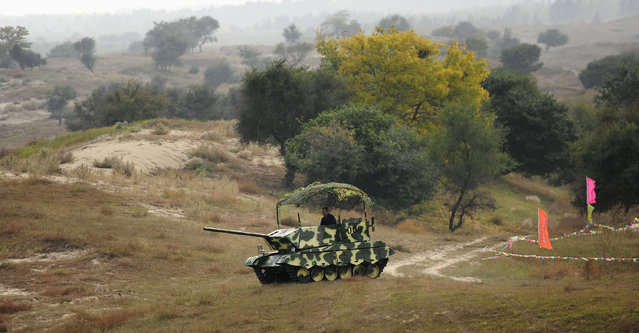 A friend of Li Guojun drives a homemade tank-shaped vehicle, in Kangping county, Shenyang, Liaoning province, September 26, 2014. Li, a farmer who is a fan of tanks, spent six months with help from his friends, to construct the vehicle which weighs 2.5 tons, according to local media. (Photo by Reuters/Stringer) 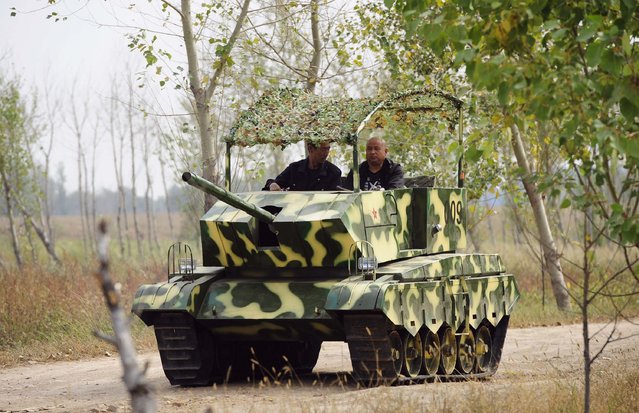 Friends of Li Guojun drive a homemade tank-shaped vehicle in Kangping county, China. Li, a farmer who is a fan of tanks, spent six months with help from his friends to construct the almost 20-foot vehicle which weighs 2.5 tons. (Photo by Sheng Li/Reuters) 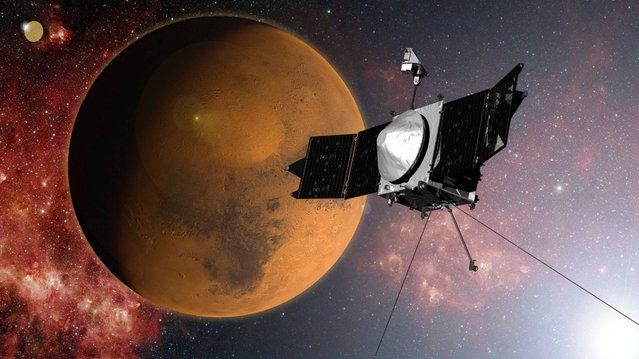 In this artist concept provided by NASA, the MAVEN spacecraft approaches Mars on a mission to study its upper atmosphere. When it arrives on Sunday September 21, 2014, MAVEN's 442 million mile journey from Earth will culminate with a dramatic engine burn, pulling the spacecraft into an elliptical orbit. It's designed to circle the planet, not land. (Photo by AP Photo/NASA) 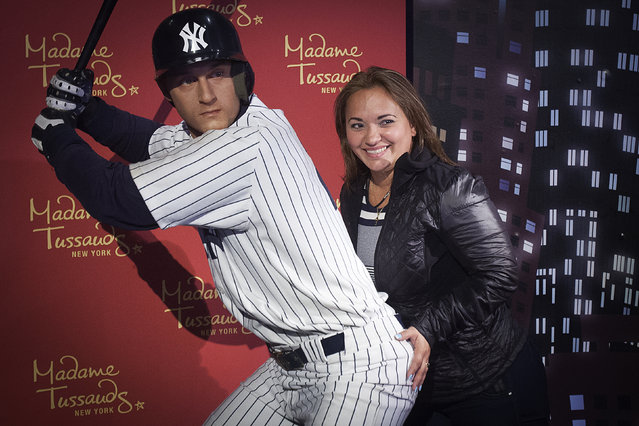 A woman poses for photos with a wax statue of New York Yankees' Derek Jeter at Madame Tussauds museum in the Manhattan borough of New York September 25, 2014. (Photo by Carlo Allegri/Reuters) 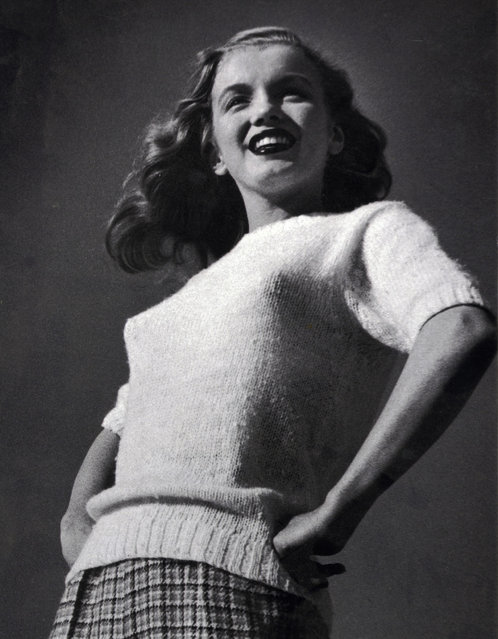 A photo of Marilyn Monroe when she was just 20-years-old has been sold at auction. The rare negative was taken during the “Some Like It Hot” star's first professional photo shoot in 1946 and fetched £4,250 British pounds (almost $7,000 USD). At the time Monroe was still known as Norma Jeane Baker, a factory worker with dreams of becoming a model. The sale was made by Auctioneer Andrew Aldridge at in Wiltshire, England. Here: Rare photo of Norma Jean, later to become Marilyn Monroe taken in 1946. Sold by Henry Aldridge and Sons auctioneers in Devizes, Wiltshire, UK. (Photo by Henry Aldridge & Sons/Splash News) 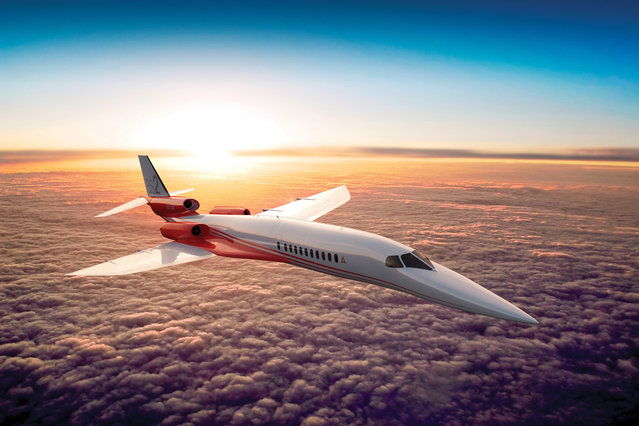 European aircraft maker Airbus is teaming up with US-based Aerospace firm Aerion to build the jet that will be able to fly from London to New York in three hours and from Los Angeles to Tokyo in six. The Aerion AS2 business jet will zoom around through the skies at 1,217 mph / 1,958 kpm , almost as fast as the world's last supersonic airliner Concorde, which flew at 1,350 mph. The two companies announced they will be joining forces on the project, sharing “capabilities in design, manufacturing and certification”. Engineers from Airbus' Defence and Space Division will work with Aerion at its base in Reno, Nevada. The cost of the AS2 is thought to be more than 78.6 million Euros / £60million GBP. Aerion hopes test flights will begin by 2019. (Photo by Ferrari/Visual Press Agency) 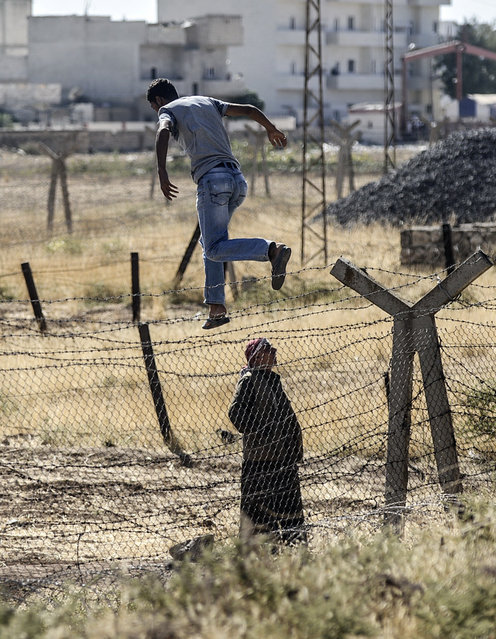 A Syrian looks on as a Kurdish man jumps over the border fence into the Syrian side during a demonstration near the Mursitpinar border crossing at Suruc in Sanliurfa province, on September 26, 2014. Tens of thousands of Syrian Kurds flooded into Turkey fleeing an onslaught by the jihadist Islamic State (IS) group that prompted an appeal for international intervention. Some of the refugee now want to return to protect their homes and join the fight against IS militants. (Photo by Bulent Kilic/AFP Photo) 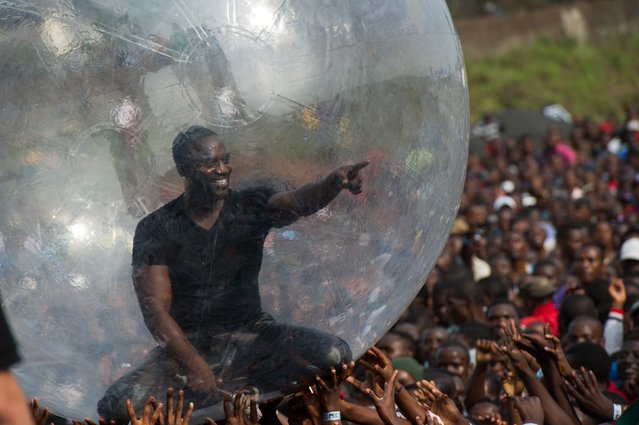 American-Senagalese hip-hop star Akon performs at a concert as part of “Peace One Day” celebrations on International Peace Day at the airport in Goma in the east of the Democratic Republic of the Congo on September 21, 2014. (Photo by Phil Moore/AFP Photo) 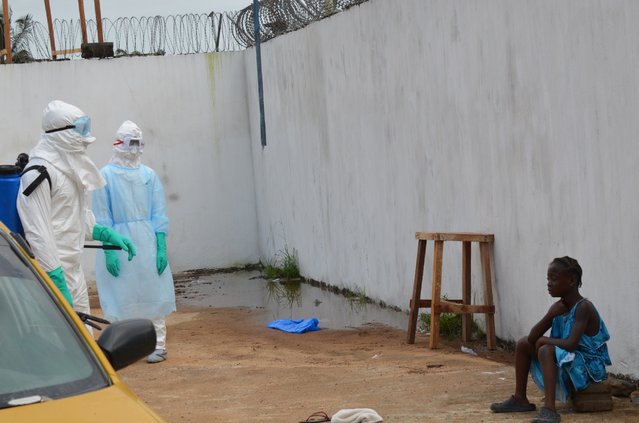 A girl cries outside the “Island Clinic”, a new Ebola treatment centre that opened in Monrovia after the death of her father and her mother by ebola on September 23, 2014. The first members of a team of 165 Cuban doctors and health workers have arrived in Sierra Leone to help the fight against Ebola, a health official said Tuesday. (Photo by Zoom Dosso/AFP Photo) 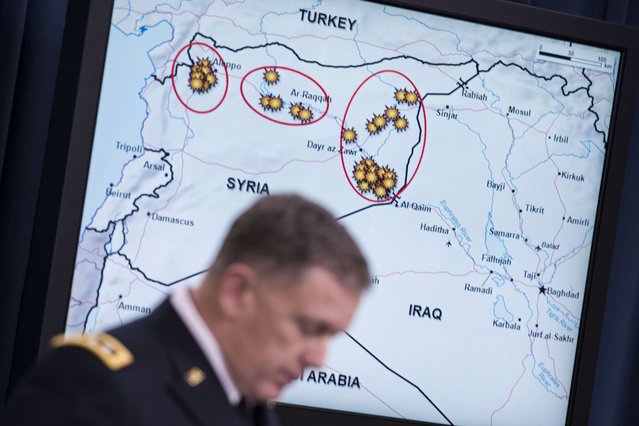 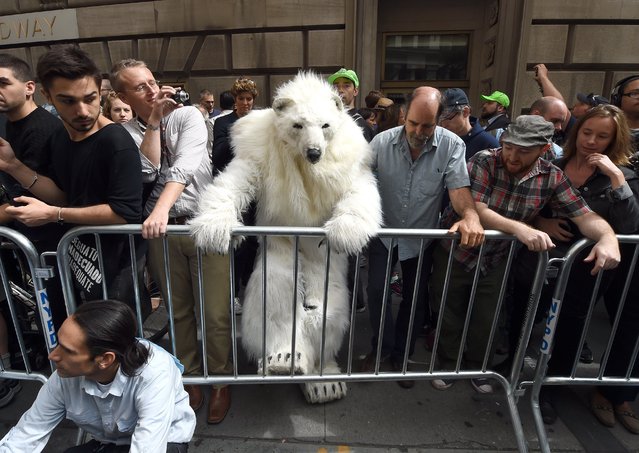 A man dressed as a Polar Bear climbs a barricade as protestors take part in the “Flood Wall Street” demonstrations on September 22, 2014, preceding the United Nations's “Climate Summit 2014: Catalyzing Action” in New York. (Photo by Timothy A. Clary/AFP Photo) 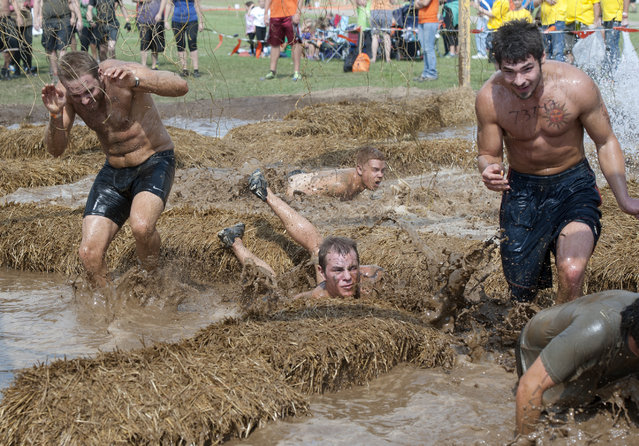 Participants make their way through the Electroshock Therapy obstacle during the Tough Mudder at Michigan International Speedway on Saturday, September 20, 2014. The 11.7 mile course is billed as “probably the toughest event on the planet”. (Photo by J. Scott Park/AP Photo/The Citizen Patriot/MLive.com) 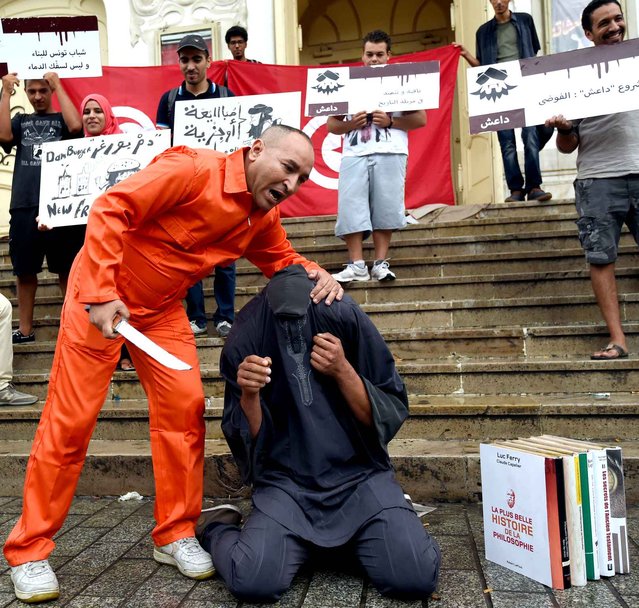 Tunisian protesters perform the simulation of an execution as they take part in a demonstration against the Islamic State (IS) group on September 25, 2014 in the capital Tunis. The IS group has seized large parts of Iraq and Syria, declaring a Muslim “caliphate” and imposing its harsh interpretation of Islamic law. It has committed widespread atrocities including mass executions of captured Iraqi soldiers, forced conversions of non-Muslims and the on-camera beheadings of Western hostages, including two US journalists and a British aid worker. (Photo by Fethi Belaid/AFP Photo) 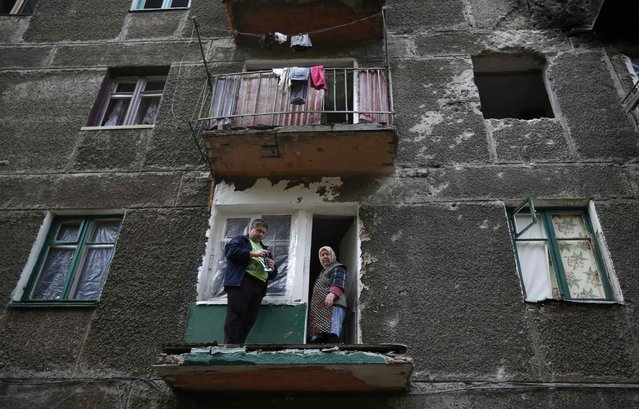 Residents stand on their balcony at a building that was damaged during a rocket shelling a day before, in the eastern Ukrainian town of Debaltseve, September 22, 2014. (Photo by David Mdzinarishvili/Reuters) 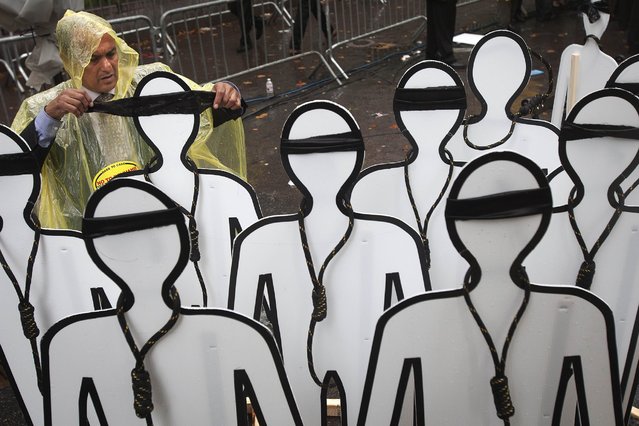 A protester ties a blindfold on effigies that have nooses around their necks near the United Nations Building as as Iranian President Hassan Rouhani speaks during the United Nations General Assembly in the Manhattan borough of New York September 25, 2014. (Photo by Carlo Allegri/Reuters) 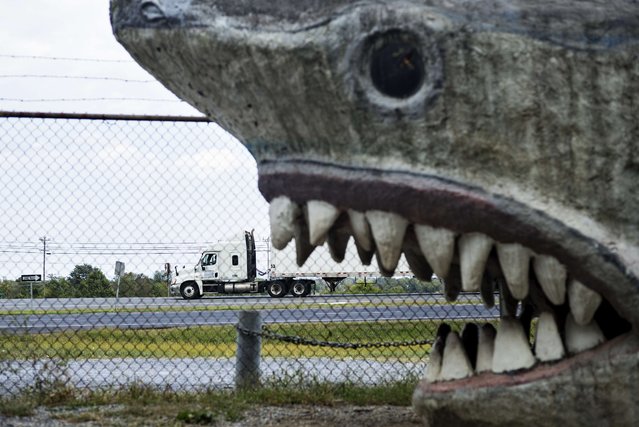 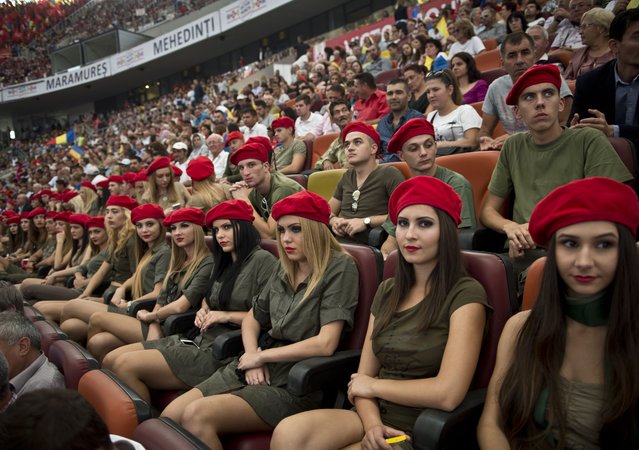 Supporters of Romanian Prime Minister Victor Ponta listen to his speech during the launching of his presidential candidature at the National Arena stadium in Bucharest on September 20, 2014. Ponta delivers his speech as presidential candidate on his birthday, surrounded by over 40,000 supporters and party members from around the country. Presidential elections are scheduled for November 2014. Incumbent President Traian Basescu, Ponta's arch-rival, will reach the end of his second and final term in office in December. Romania, a former communist dictatorship of 20 million people, is the second poorest EU country after Bulgaria. (Photo by Daniel Mihailescu/AFP Photo)
Edit Del
27 Sep 2014 12:20:00, post received 0 comments
Publication archive:
←   →
Popular tags:
All tags
Last searches: