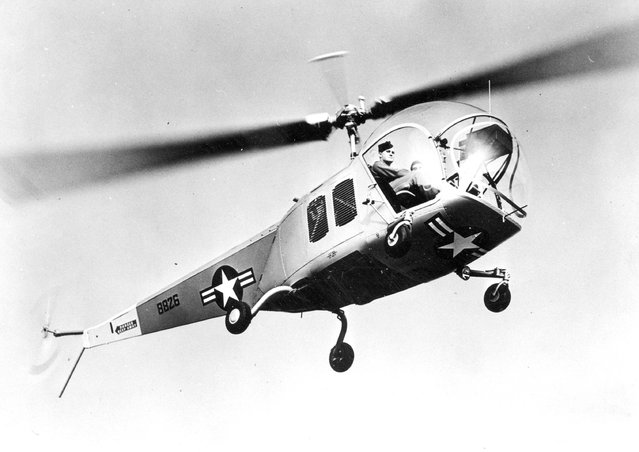 Number 10. BELL H-13 SIOUX was a two-bladed, single engine, light helicopter built by Bell Helicopter. Westland Aircraft manufactured the Sioux under license for the British military as the Sioux AH.1 and HT. In 1947, the United States Air Force ordered the improved Bell Model 47A. Most were designated YR-13 and three winterized versions were designated YR-13A. The United States Army first ordered Bell 47s in 1948 under the designation H-13. These would later receive the name Sioux. The Bell-built H-13 B is seen airborne in this April 29, 1951 photo. The helicopter is equipped with a 173 horsepower engine, cruises at 85 miles per hour, climbs 900 feet in a minute and has a service ceiling of 11,500 feet. (Photo by AP Photo) 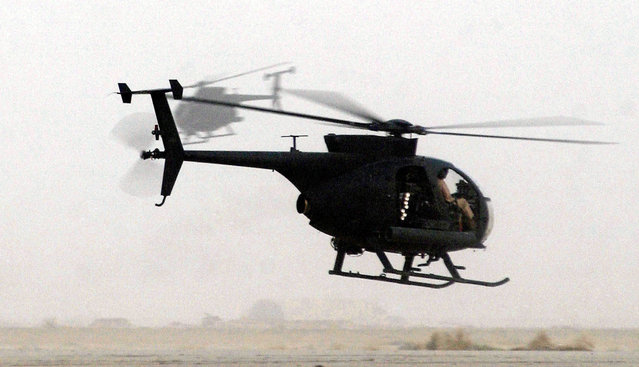 Number 9. HUGHES MH-6 LITTLE BIRD, nicknamed the Killer Egg, and its attack variant AH-6, are light helicopters used for special operations in the United States Army. This little helicopter has proved its worth in Grenada, Nicaragua, Panama, Somalia and Iraq. They fulfilled a multitude of roles from observation, transport, to attack. Here: Two US Army (USA) AH-6J Little Bird helicopters take off for a mission at a forward deployed location in southern Iraq during Operation Iraqi Freedom. (Photo by SSGT Shane Cuomo/USAF) 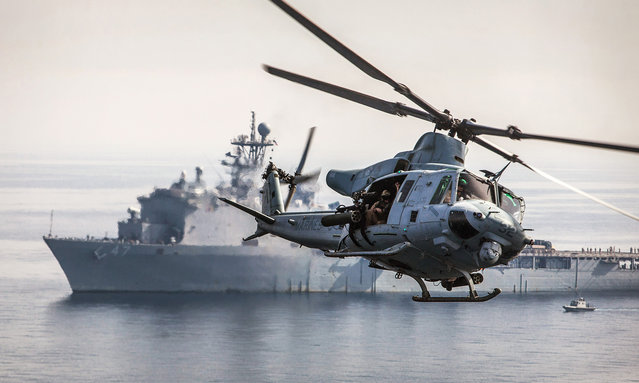 Number 8. BELL UH-1 IROQUOIS (HUEY) is a military helicopter powered by a single turboshaft engine, with a two-bladed main rotor and tail rotor. The helicopter was developed by Bell Helicopter to meet the United States Army's requirement for a medical evacuation and utility helicopter in 1952, and first flew on 20 October 1956. Ordered into production in March 1960, the UH-1 was the first turbine-powered helicopter to enter production for the United States military, and more than 16,000 have been produced worldwide. The first combat operation of the UH-1 was in the service of the U.S. Army during the Vietnam War. The original designation of HU-1 led to the helicopter's nickname of Huey. In September 1962, the designation was changed to UH-1, but “Huey” remained in common use. Approximately 7,000 UH-1 aircraft saw service in Vietnam. Here: A UH-1N Huey with Marine Medium Helicopter Squadron, 15th Marine Expeditionary Unit (MEU), flies past the USS Rushmore, March 29, 2013. The 15th MEU is deployed as part of the Peleliu Amphibious Ready Group as a U.S. Central Command theatre reserve force, providing support for maritime security operations and theatre security cooperation efforts in the U.S. 5th Fleet area of responsibility. (Photo by Cpl. Bobby J. Gonzalez/U.S. Marine Corps) 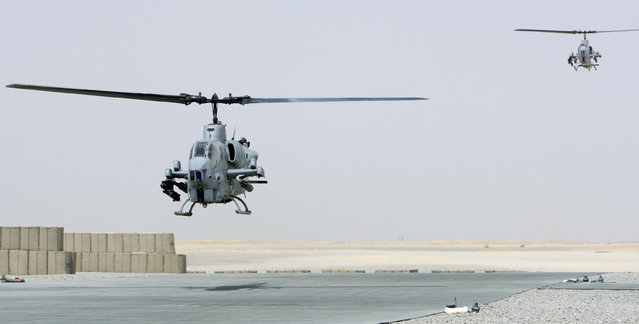 Number 7. BELL AH-1 COBRA is a two-blade, single engine attack helicopter manufactured by Bell Helicopter. It was developed using the engine, transmission and rotor system of the Bell's UH-1 Iroquois. The AH-1 is also referred to as the HueyCobra or Snake. The AH-1 was the backbone of the United States Army's attack helicopter fleet, but has been replaced by the AH-64 Apache in Army service. Upgraded versions continue to fly with the militaries of several other nations. The AH-1 twin engine versions remain in service with United States Marine Corps as the service's primary attack helicopter. Surplus AH-1 helicopters have been converted for fighting forest fires. Here: Two AH-1 Cobra attack helicopters land in central Afghanistan Saturday, September 26, 2009. (Photo by Alex Brandon/AP Photo) 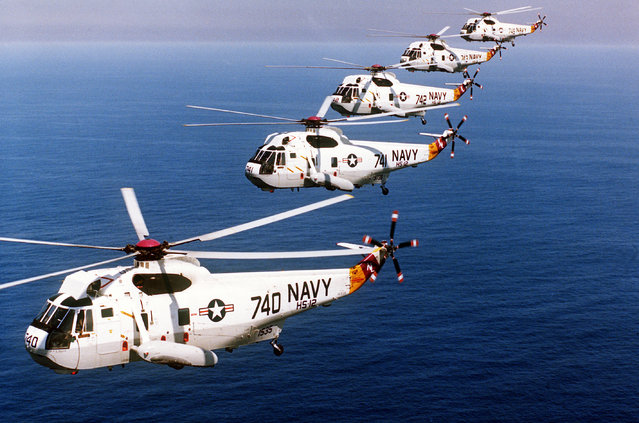 Number 6. SIKORSKY SH-3 SEA KING a twin-engined anti-submarine warfare helicopter designed and built by Sikorsky Aircraft. It was a landmark design, being one of the first ASW helicopter to take advantage of turboshaft engines, as well as being the first amphibious helicopter in the world. Introduced in 1961, it served as the United States Navy as a key ASW and utility asset for several decades before being replaced by the non-amphibious Sikorsky SH-60 Seahawk in the 1990s. The type also proved popular in civil service and with foreign military customers, as of 2014 many remain in service in a number of nations around the world. The major civil versions are the S-61L and S-61N. Here: Air-to-air left side view of five SH-3 Sea King antisubmarine warfare helicopters from Helicopter Antisubmarine Squadron 12 (HS-12) flying in formation. (Photo by U.S. DefenseImagery) 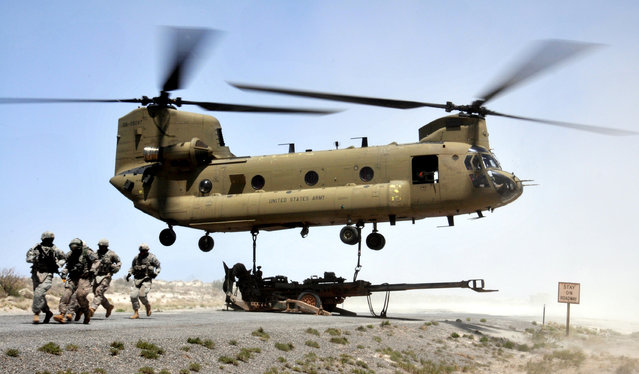 Number 4. SIKORSKY UH-60 BLACK HAWK is a four-bladed, twin-engine, medium-lift utility helicopter manufactured by Sikorsky Aircraft. Sikorsky submitted the S-70 design for the United States Army's Utility Tactical Transport Aircraft System (UTTAS) competition in 1972. The Army designated the prototype as the YUH-60A and selected the Black Hawk as the winner of the program in 1976, after a fly-off competition with the Boeing Vertol YUH-61. The UH-60A entered service with the U.S. Army in 1979, to replace the Bell UH-1 Iroquois as the Army's tactical transport helicopter. This was followed by the fielding of electronic warfare and special operations variants of the Black Hawk. Improved UH-60L and UH-60M utility variants have also been developed. Modified versions have also been developed for the U.S. Navy, Air Force, and Coast Guard. Black Hawks have served in combat during conflicts in Grenada, Panama, Iraq, Somalia, the Balkans, Afghanistan, and other areas in the Middle East. Here: Six UH-60L Black Hawks and two CH-47F Chinooks, assigned to Task Force Brawler, 4th Battalion, 3rd Aviation Regiment, Task Force Falcon, simultaneously launch a daytime mission January 18 from Multinational Base Tarin Kowt. (Photo by 3rd Combat Aviation Brigade/U.S. Army) 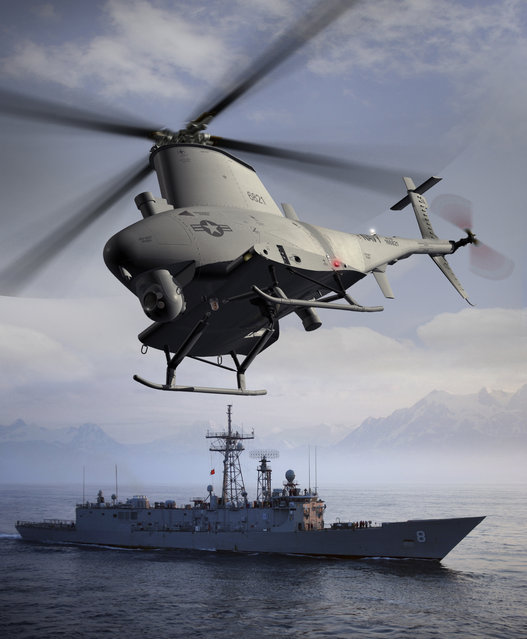 Number 3. MQ-8 FIRE SCOUT is an unmanned autonomous helicopter developed by Northrop Grumman for use by the United States Armed Forces. The Fire Scout is designed to provide reconnaissance, situational awareness, aerial fire support and precision targeting support for ground, air and sea forces. The initial RQ-8A version was based on the Schweizer 330, while the enhanced MQ-8B was derived from the Schweizer 333. The larger MQ-8C variant is based on the Bell 407. (Photo by Senior Illustrator ISWR Rancho B Kent Rump) 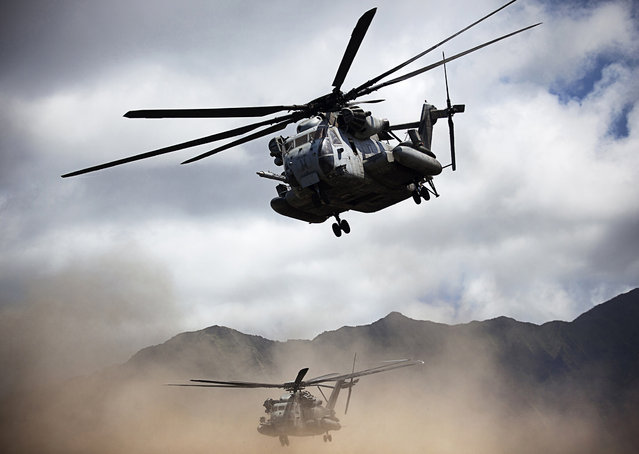 Number 2. CH-53 SUPER STALLION is the most common name for the Sikorsky S-65 family of heavy-lift transport helicopters. Originally developed for use by the United States Marine Corps, it is also in service with Germany, Iran, Israel, and Mexico. The United States Air Force operated the HH-53 “Super Jolly Green Giant” during the late- and post-Vietnam War era, updating most of them as the MH-53 Pave Low. The dimensionally-similar CH-53E Super Stallion is a heavier-lifting, improved version designated S-80E by Sikorsky. Its third engine makes it more powerful than the Sea Stallion, which it has replaced in the heavy-lift mission.Two CH-53E Super Stallion helicopters assigned to Marine Heavy Helicopter Squadron 463 take off after delivering Marines and Canadian soldiers as part of a noncombatant evacuation operation during Exercise Rim of the Pacific 2012 at Marine Corps Training Area Bellows, Hawaii, July 26, 2012. From June 29 to August 3, more than 25,000 military personnel from 22 nations, 200 aircraft and 40 ships and submarines are participating in RIMPAC. The world's largest international maritime exercise, the 23rd in the series that began in 1971, is held biennially in and around the Hawaiian Islands. The exercise fosters training, interoperability and improved relations between countries providing security in sea lanes and oceans around the world. (Photo by Cpl. Reece Lodder/Marine Corps Base Hawaii) 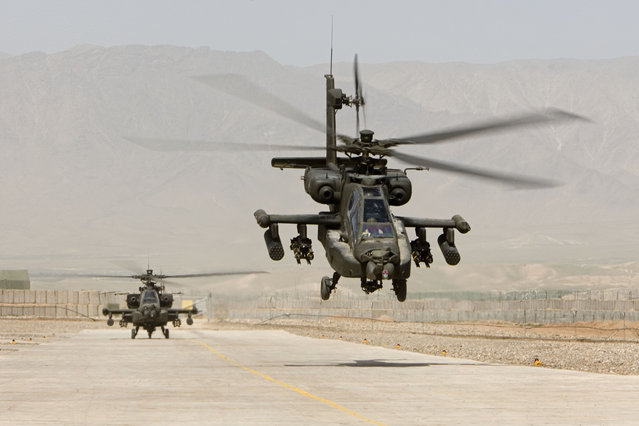 Number 1. BOEING AH-64 APACHE is a four-blade, twin-engine attack helicopter with a tailwheel-type landing gear arrangement, and a tandem cockpit for a two-man crew. It features a nose-mounted sensor suite for target acquisition and night vision systems. It is armed with a 30 mm (1.18 in) M230 Chain Gun carried between the main landing gear, under the aircraft's forward fuselage. It has four hardpoints mounted on stub-wing pylons, typically carrying a mixture of AGM-114 Hellfire missiles and Hydra 70 rocket pods. The AH-64 has a large amount of systems redundancy to improve combat survivability. (Photo by Sjoerd Hilckmann)
Edit Del
08 Aug 2014 11:59:00, post received 0 comments
Publication archive:
←   →
Popular tags:
All tags
Last searches: