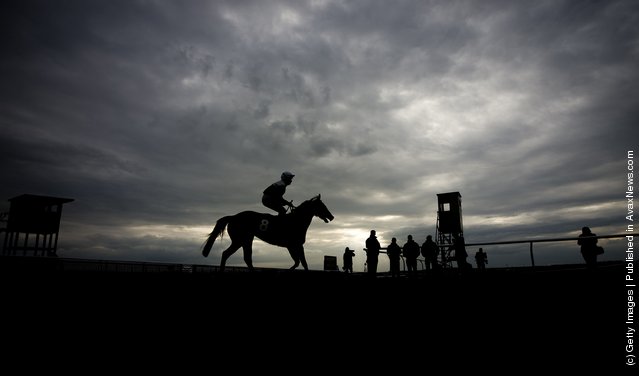 A runner returns after the last race of the day at Newmarket racecourse on April 13, 2011 in Newmarket, England. (Photo by Alan Crowhurst/ Getty Images) 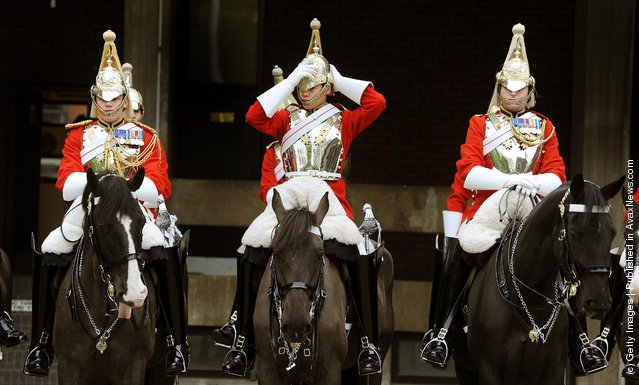 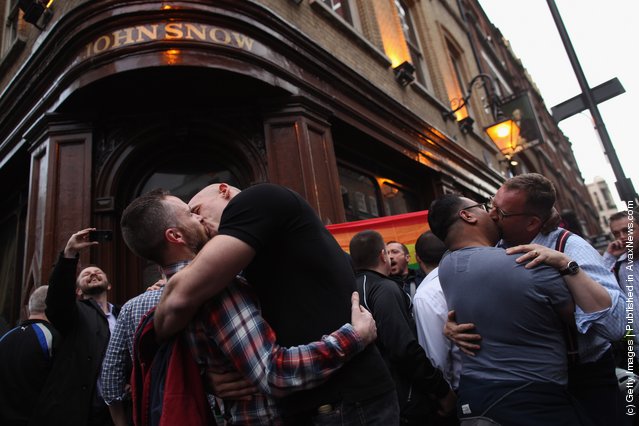 Gay men and women gather outside the John Snow pub in Soho to stage a group kiss on April 15, 2011 in London, England. The demonstartion took place after gay couple who were enjoying their first date were ejected from the pub by a member of staff claiming to be the Landlord, for kissing. A demonstration took place outside the premises and conducted a group kiss. (Photo by Dan Kitwood/Getty Images) 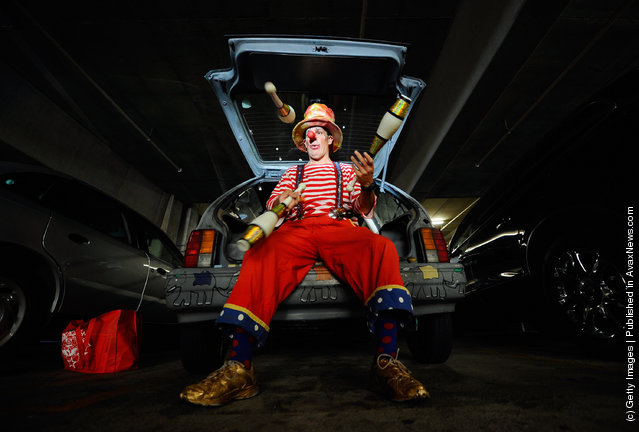 Andy Swan “Zippy the Clown” from Sacramento, California, juggles clubs next to his elephant car after competing in the group skit performance during the 2011 Clowns of America International Convention on April 15, 2011 in Anaheim, California. Several hundred clowns, from all over the United States and from as far as Puerto Rico and Germany, are attending the convention to compete in skits and hone their skills in the art of balloon-making and face-painting. (Photo by Kevork Djansezian/Getty Images) 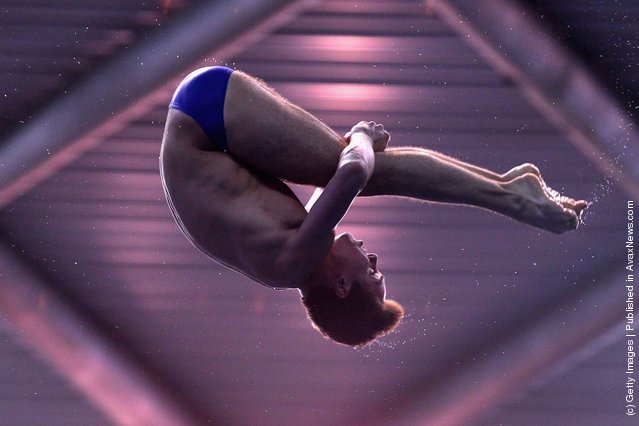 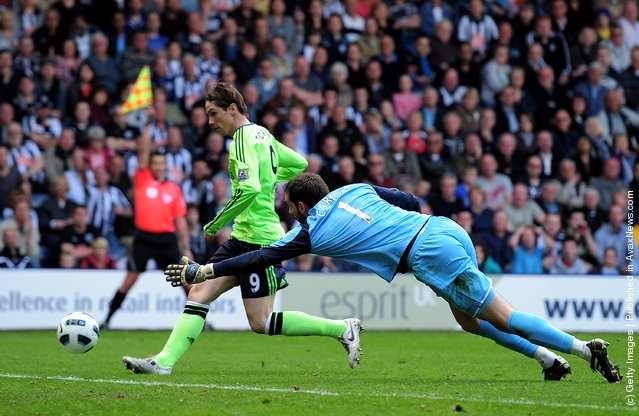 Fernando Torres of Chelsea beats Scott Carson of West Bromwich Albion to score a disallowed goal during the Barclays Premier League match between West Bromich Albion and Chelsea at The Hawthorns on April 16, 2011 in West Bromwich, England. (Photo by Shaun Botterill/Getty Images) 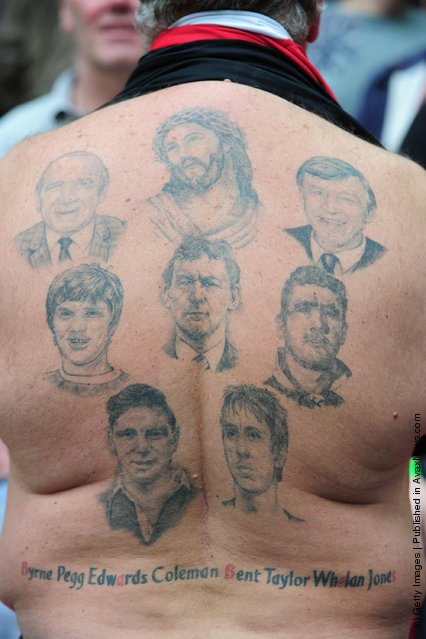 A Man United fan shows his tattoos of Manchester United “legends” during the FA Cup sponsored by E.ON semi final match between Manchester City and Manchester United at Wembley Stadium on April 16, 2011 in London, England. (Photo by Jamie McDonald/Getty Images) 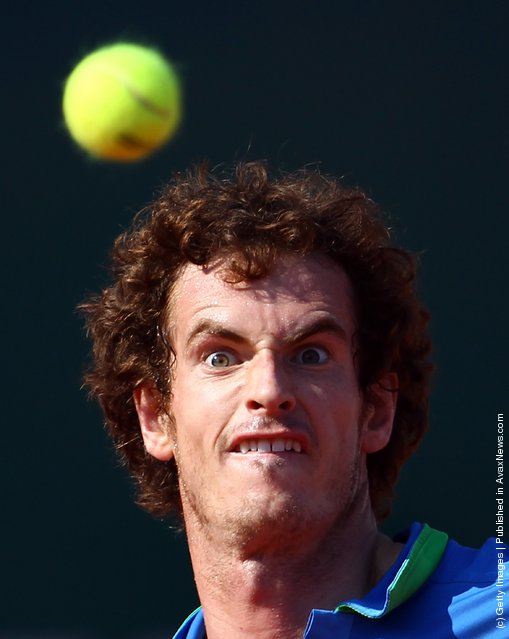 Andy Murray of Great Britain concentrates closely on the ball in his match against Rafael Nadal of Spain during Day Seven of the ATP Masters Series Tennis at the Monte Carlo Country Club on April 16, 2011 in Monte Carlo, Monaco. (Photo by Julian Finney/Getty Images) 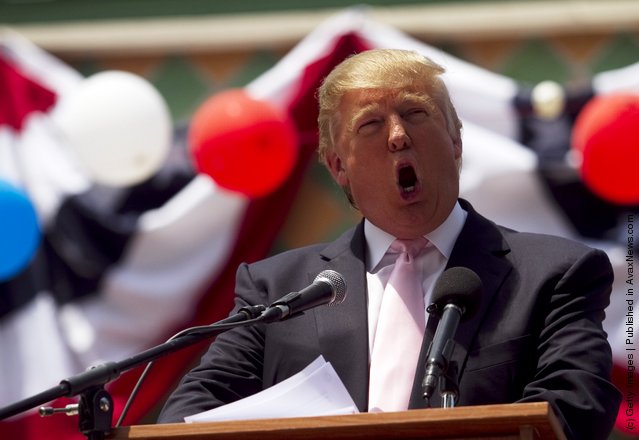 Billionaire Donald Trump speaks to a crowd at the 2011 Palm Beach County Tax Day Tea Party April 16, 2011 at Sanborn Square in Boca Raton, Florida. Trump is considering a bid for the 2012 precidency and is expected to announce his running in the coming weeks. (Photo by John W. Adkisson/Getty Images) 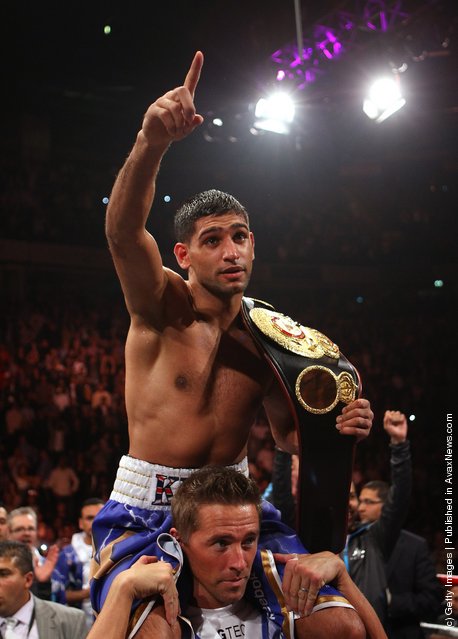 Amir Khan celebrates after victory over Paul McCloskey in the WBA Light-Welterweight Championship fight between Amir Khan and Paul McCloskey at MEN Arena on April 16, 2011 in Manchester, England. (Photo by Alex Livesey/Getty Images) 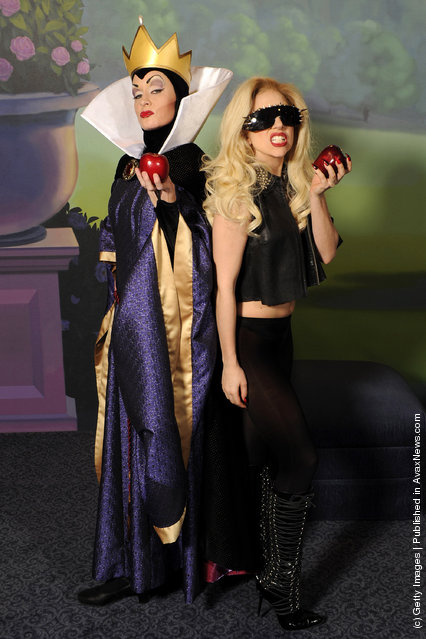 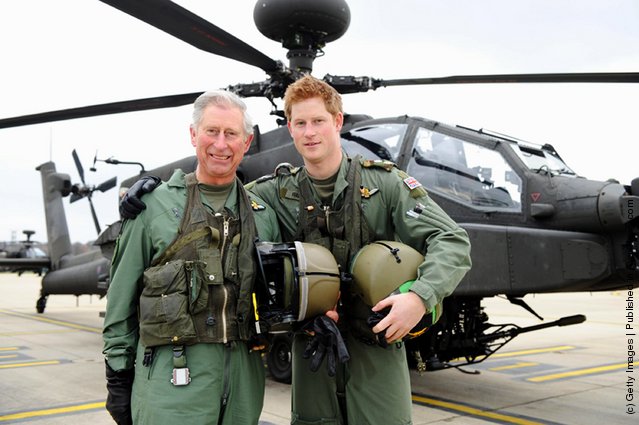 In this handout photo, dated March 21, 2011, issued by the Ministry of Defence,Prince Harry and his father, the Prince Charles, Prince of Wales, stand in front of an Apache Helicopter after Prince Charles was invited by the Army Aviation Centre in his role as Colonel-in-Chief of the Army Air Corps (AAC) in order to fly an Apache and to meet students on the Apache Conversion Course on March 21, 2011 in Middle Wallop, England. The announcement by St James's Palace comes a few days after the royal, a trainee Apache helicopter pilot, passed the half-decade milestone. (Photo by Richard Dawson/MoD via Getty Images) 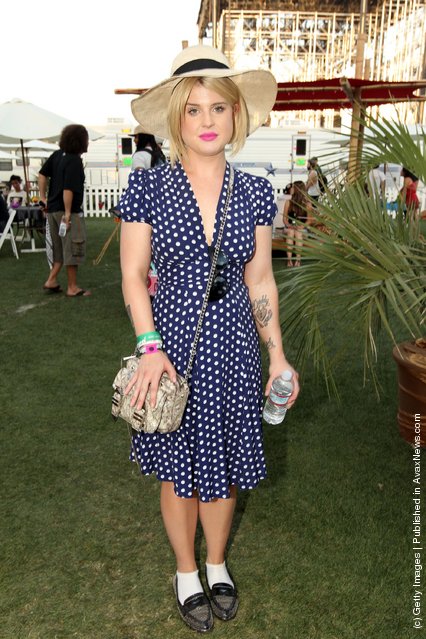 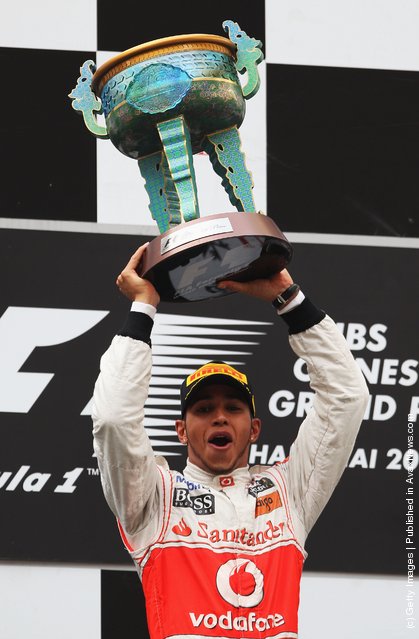 Lewis Hamilton of Great Britain and McLaren celebrates on the podium after winning the Chinese Formula One Grand Prix at the Shanghai International Circuit on April 17, 2011 in Shanghai, China. (Photo by Mark Thompson/Getty Images) 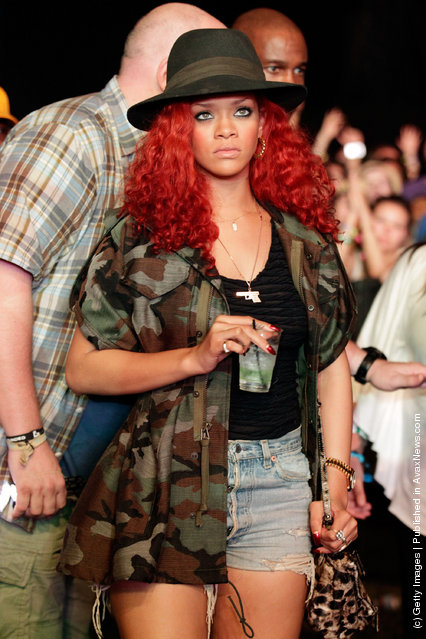 Singer Rihanna in the audience during Day 2 of the Coachella Valley Music & Arts Festival 2011 held at the Empire Polo Club on April 16, 2011 in Indio, California. (Photo by Christopher Polk/Getty Images) 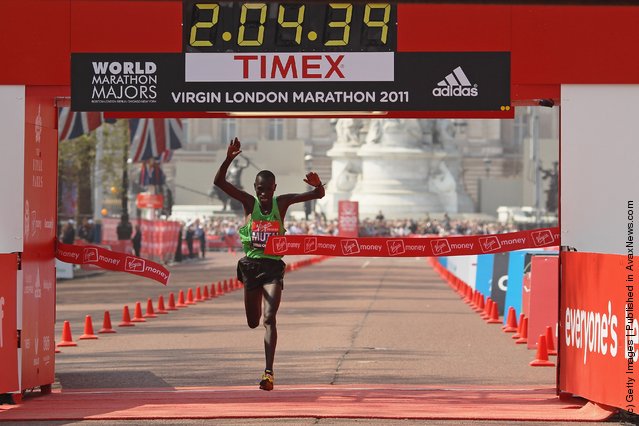 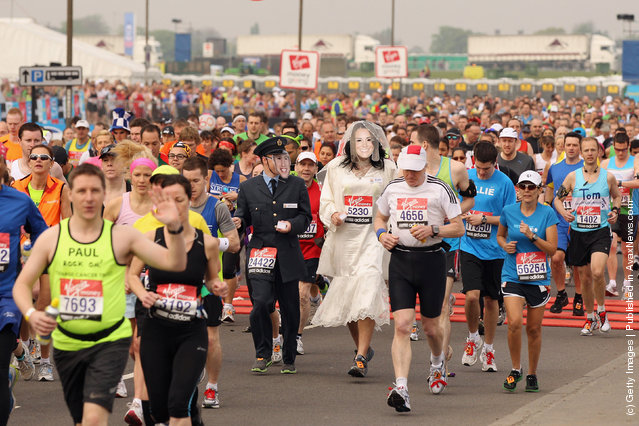 Runners dressed as Prince William and Kate Middleton depart Blackheath at the start of the 2011 Virgin Money London Marathon on April 17, 2011 in London, England. 36,500 competitors will tackle the 26.2 mile course which passes several iconic London landmarks and finishes on the Mall in front of Buckingham Palace. (Photo by Oli Scarff/Getty Images) 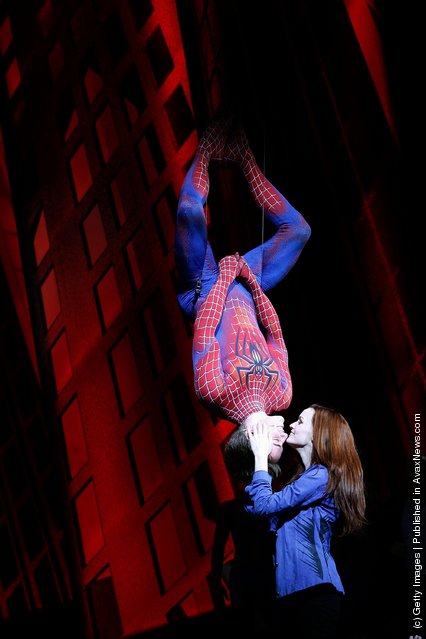 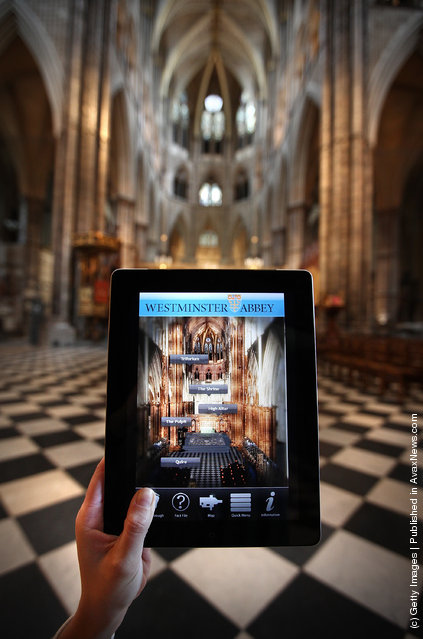 In this photo illustration, the Abbey 3D App is displayed on an iPad device inside Westminster Abbey on April 13, 2011 in London, England. The $2.99 app is an interactive guide to Westminster Abbey where Prince William and Kate Middleton will marry on April 29, 2011. Android and Apple platforms will make the app available in time for the wedding. (Photo Illustration by Peter Macdiarmid/Getty Images) 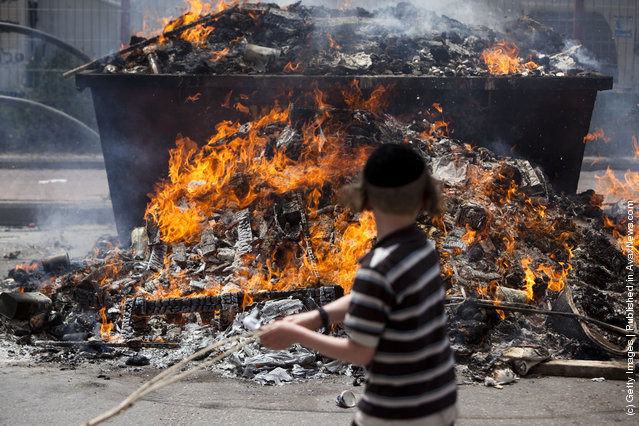 An Ultra-Orthodox Jewish boy burns leavened items in a final preparation before the start at sundown of the Jewish Passover holiday on April 18, 2011 in Bnei Brak, Israel. All leavened food, such as bread, is forbidden to Jews during the week-long holiday, which commemorates the Israelites' hasty departure from Egypt. (Photo by Uriel Sinai/Getty Images) 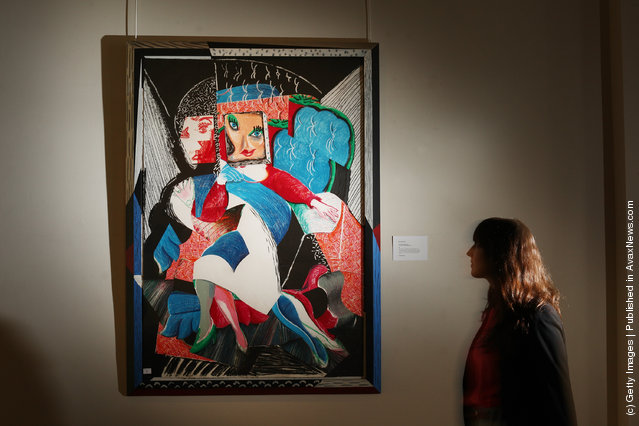 A visitor to Bonhams auctioneers looks at the lithograph, “An Image of Celia” by David Hockney on April 18, 2011 in London, England. Works spanning five decades of David Hockney's creative output are on show at Bonhams prior to a sale dedicated to his work on April 20, 2011. (Photo by Peter Macdiarmid/Getty Images) 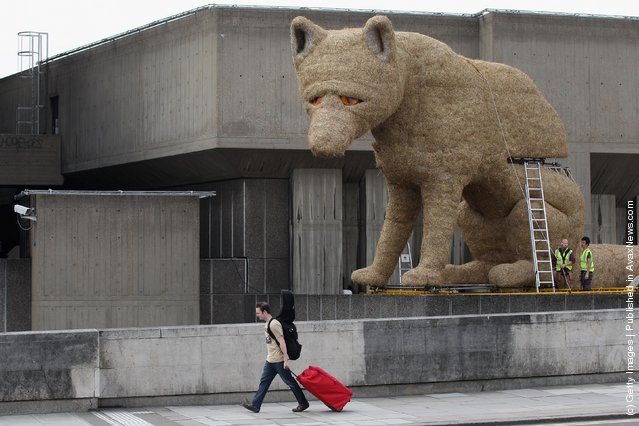 The finishing touches are made to a giant sculpture on the Hayward Gallery entitled “Urban Fox” and made from straw bales on April 18, 2011 in London, England. The sculpture features in the Southbank Centre's 60th anniversary celebration of the 1951 Festival of Britain. The celebration will feature various cultural and creative events and runs from April 22 until September 4, 2011 at London's Southbank Centre. (Photo by Oli Scarff/Getty Images)
Edit Del
22 Apr 2011 09:45:00, post received 0 comments
Publication archive:
←   →
Popular tags:
All tags
Last searches: