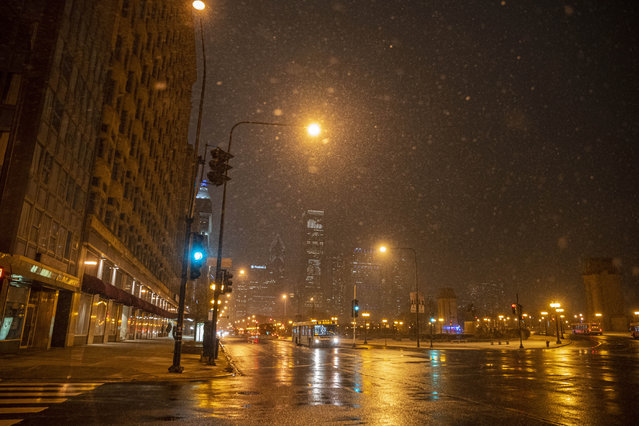 Snow falls on the city of Chicago near the S Michigan Ave and E Balbo Ave in the Loop, Monday, January 25, 2021. (Photo by Anthony Vazquez/Chicago Sun-Times via AP Photo) 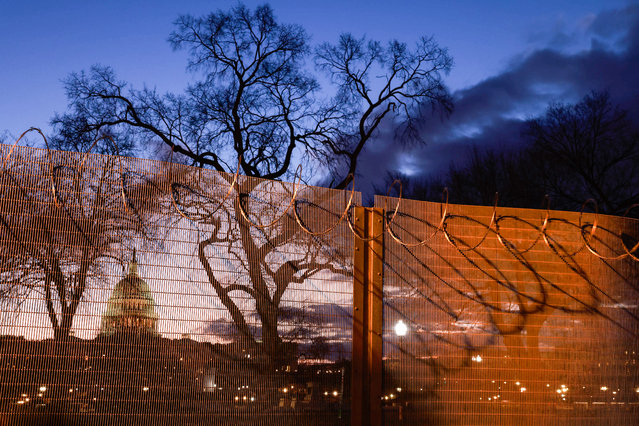 Razor wire and fences still surround the United States Capitol building at sunrise on January 23, 2021 a few days after the inauguration of President Joe Biden and Vice President Kamala Harris. The Capitol was breached during an insurrection January 6 just days before the inauguration. (Photo by Jeremy Hogan/SOPA Images/Rex Features/Shutterstock) 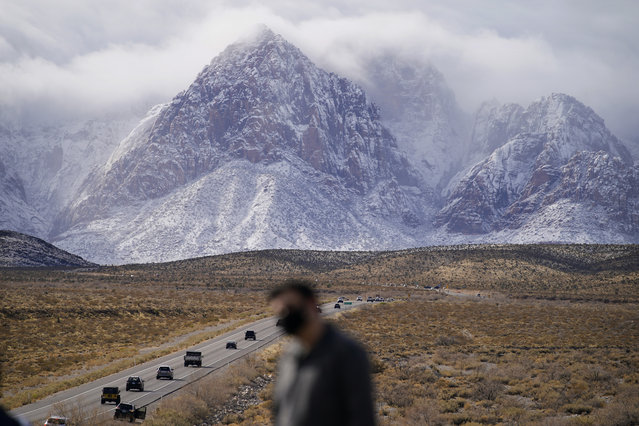 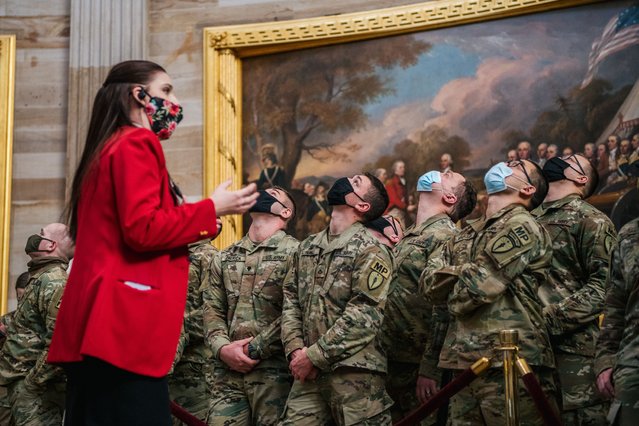 National Guard Citizen-soldiers listen during a U.S. Capitol tour on January 23, 2021 in Washington, DC. Due to COVID-19, Capitol tours had been restricted since March 13, 2020, but have exclusively been reopened for National Guard members. (Photo by Brandon Bell/Getty Images) 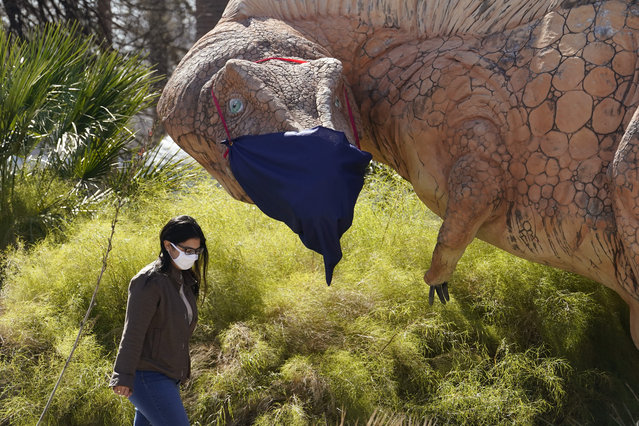 A woman wearing a face mask to protect against the spread of COVID-19 walks past a mask clad Acrocanthosaurus display at the Witte Museum, Thursday, January 28, 2021, in San Antonio. (Photo by Eric Gay/AP Photo) 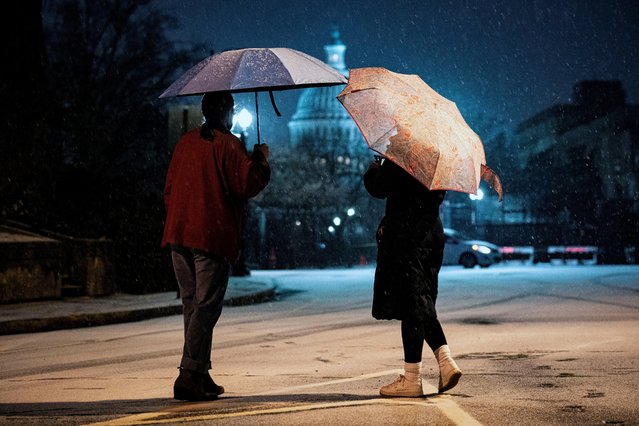 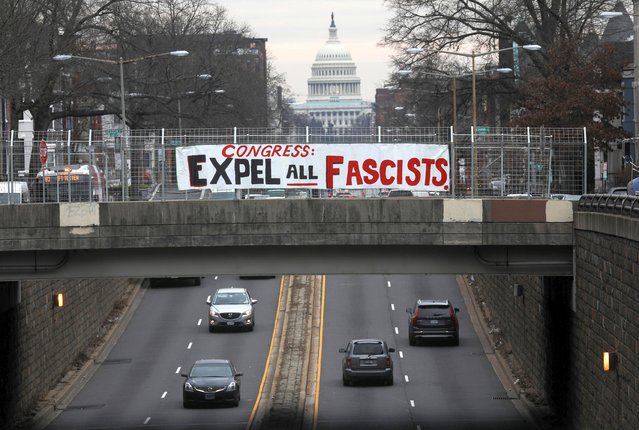 A banner with a message for members of the U.S. Congress hangs over a popular thoroughfare to the U.S. Capitol Building where members of the U.S. House of Representatives are expected to present an article of impeachment for former U.S. President Donald Trump to the U.S. Senate later today, in Washington, D.C., U.S. January 25, 2021. (Photo by Leah Millis/Reuters) 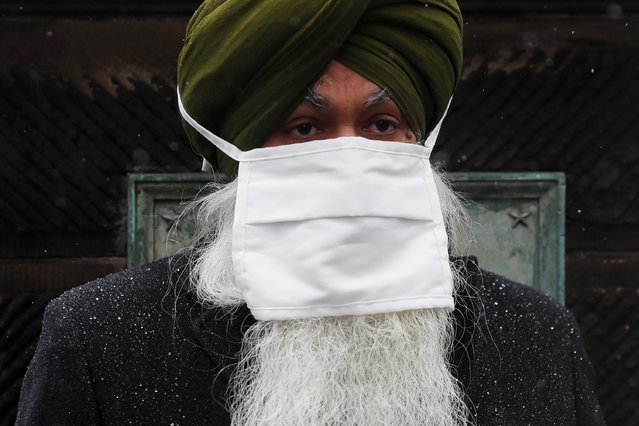 A man attends a protest in solidarity with Indian famers protesting against agricultural reforms outside the Indian Consulate in the Manhattan borough of New York, U.S., January 26, 2021. (Photo by Shannon Stapleton/Reuters) 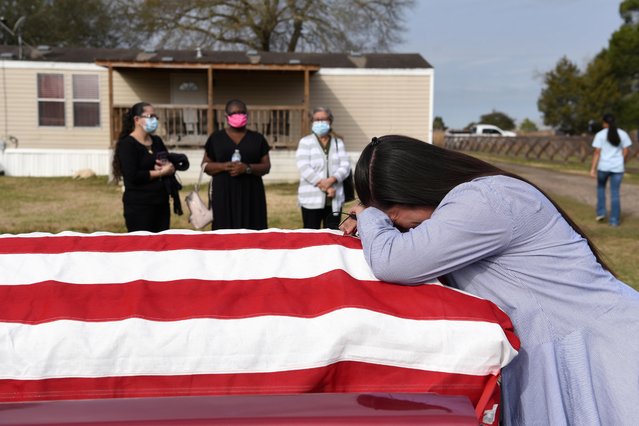 Lila Blanks holds the casket of her husband, Gregory Dwayne Blanks, who died of COVID-19, ahead of his funeral in San Felipe, Texas, January 26, 2021. Greg died on January 17 at the age of 50. The father of 7 served in the U.S. Army and later built a career as an HVAC technician. (Photo by Callaghan O'Hare/Reuters) 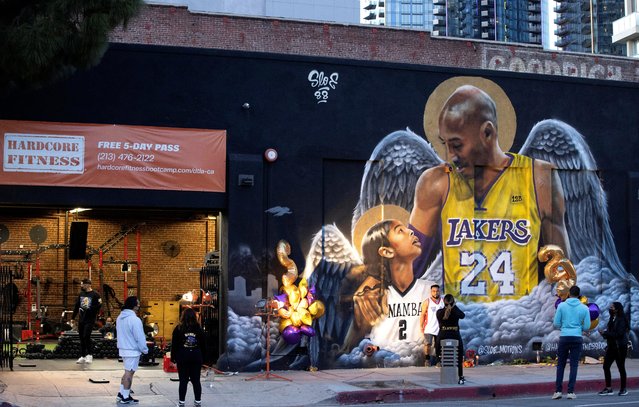 People stop by a mural of late Kobe Bryant, who died one year ago alongside his daughter and seven others when their helicopter crashed into a hillside, in Los Angeles, California, January 26, 2021. (Photo by Mario Anzuoni/Reuters) 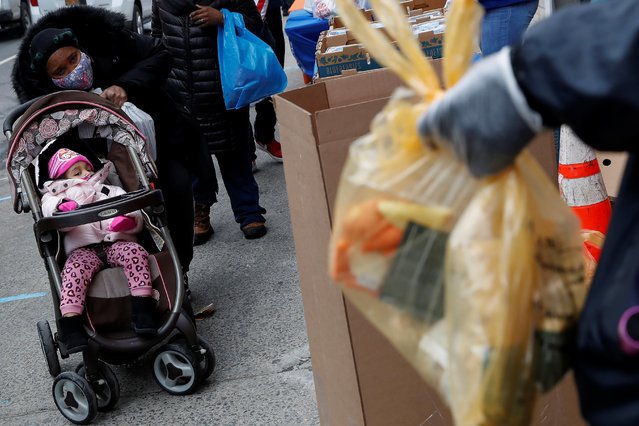 People wait in line for donations outside a food distribution facility amid the spread of the coronavirus disease (COVID-19) in the Harlem section of the Manhattan borough of New York, U.S., January 27, 2021. (Photo by Shannon Stapleton/Reuters) A sign in a store reads “Hands up if you got vaccinated” amid the coronavirus disease (COVID-19) pandemic in the Manhattan borough of New York City, New York, U.S., January 27, 2021. (Photo by Carlo Allegri/Reuters) 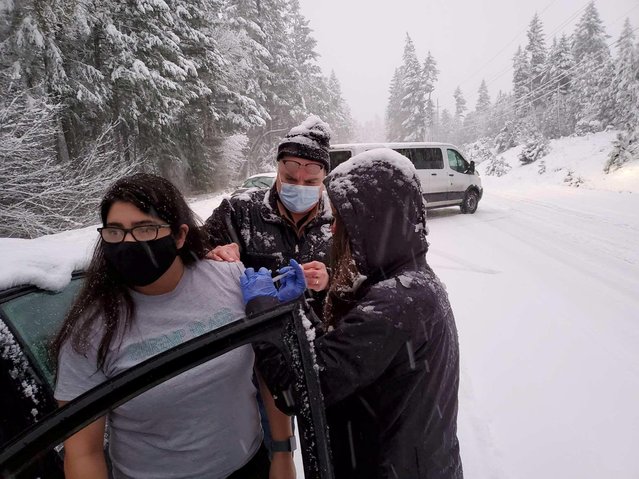 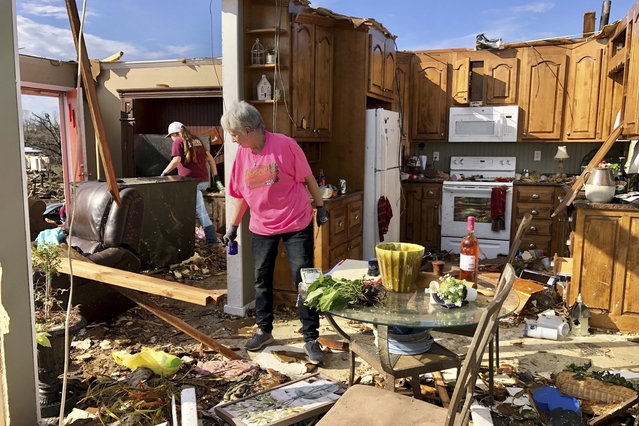 Patti Herring sobs as she sorts through the remains of her home in Fultondale, Ala., on Tuesday, January 26, 2021, after it was destroyed by a tornado. (Photo by Jay Reeves/AP Photo) 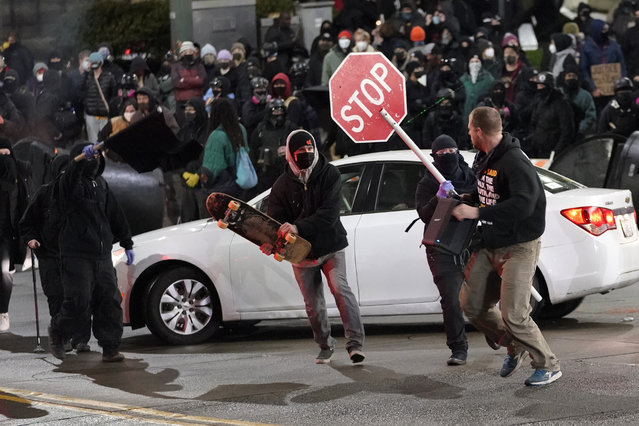 Protesters chase a street preacher, right, who was using a loudspeaker to deliver a sermon during a protest against police brutality, Sunday, January 24, 2021, in downtown Tacoma, Wash., south of Seattle. The protest came a day after at least two people were injured when a Tacoma Police officer responding to a report of a street race drove his car through a crowd of pedestrians that had gathered around him. Several people were knocked to the ground and at least one person was run over. (Photo by Ted S. Warren/AP Photo) 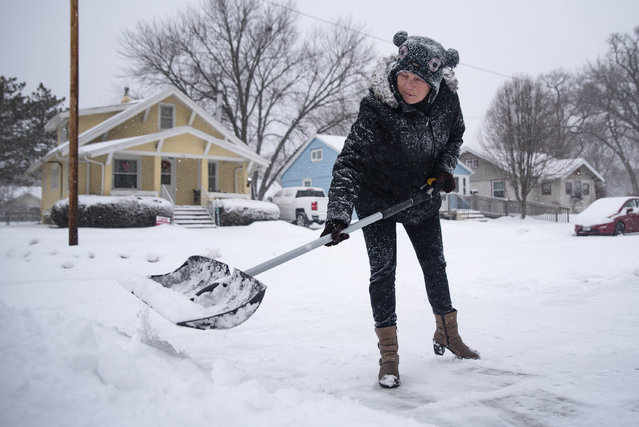 Wendy Lacina shovels her driveway with a neighbor's help on Monday, January 25, 2021 in Valley Junction, Iowa. Lacina, 53, is scheduled to undergo eye surgery in February. “Even in this weather, I would always wear my sunglasses. Today I thought, 'It's not sunny out — Let the cold hit the eye, maybe it'll help it”, Lacina joked. “I got nothing to lose”. (Photo by Olivia Sun/The Des Moines Register via AP Photo) 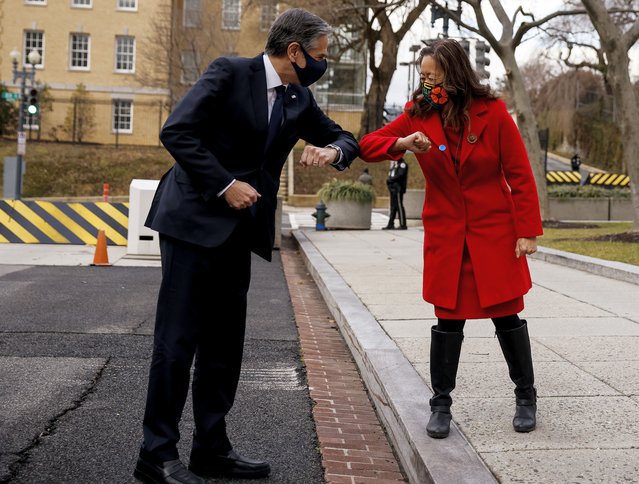 Newly confirmed U.S. Secretary of State Antony Blinken is greeted with an elbow bump as he arrives for a welcome ceremony at the State Department, Wednesday, January 27, 2021 in Washington. (Photo by Carlos Barria/Pool via AP Photo) 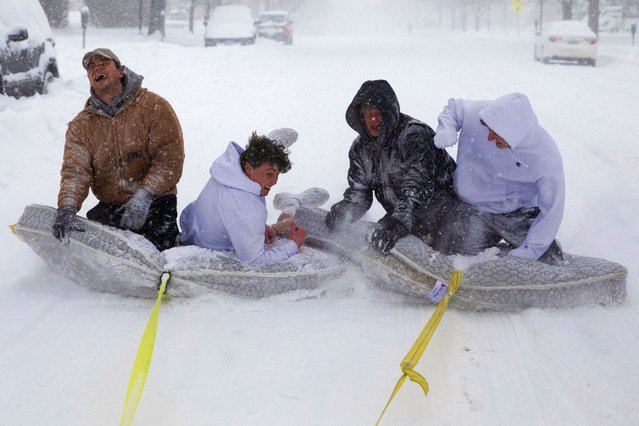 Brothers of the Phi Gamma Delta Fraternity pull their friends on mattresses along the street in front of the UNL Union during a winter storm in downtown Lincoln, Neb. on Monday, January 25, 2021. (Photo by Kenneth Ferriera/Lincoln Journal Star via AP Photo) Traffic cones guide drivers into a mega COVID-19 vaccination site set up in the parking lot of Dodger Stadium in Los Angeles, Wednesday, January 27, 2021. California is changing up the way it is delivering coronavirus vaccines, moving to a more centralized system that is expected to streamline appointment sign-up, notification, and eligibility for nearly 40 million residents who want to know when they can get a shot and where. (Photo by Jae C. Hong/AP Photo) 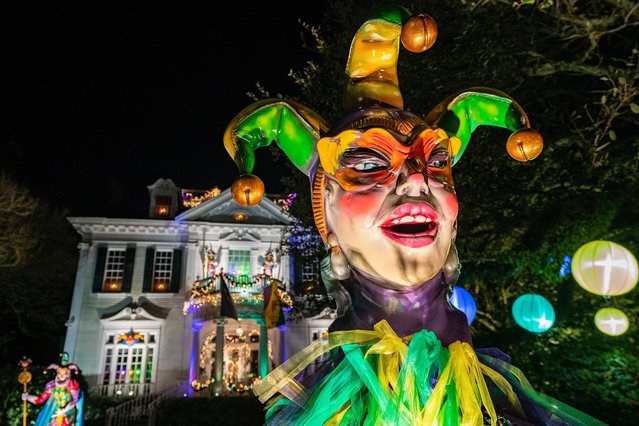