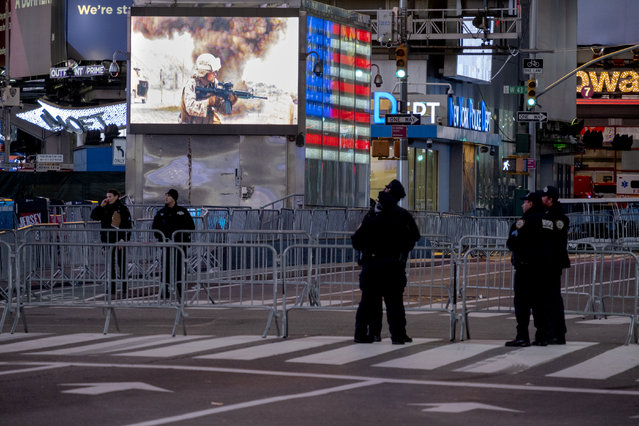 Police officers stand along a mostly empty Seventh Avenue during what would normally be a Times Square packed with people in New York, late Thursday, December 31, 2020, as celebrations have been truncated this New Year's Eve due to the ongoing pandemic. (Photo by Craig Ruttle/AP Photo) 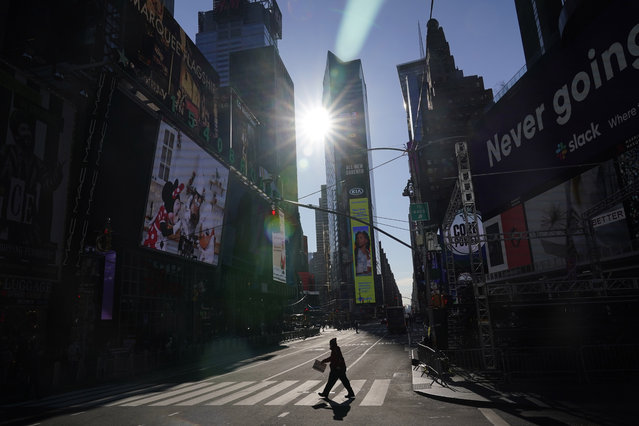 A pedestrian makes his way across a lightly trafficked intersection in Times Square, New York, Monday, December 28, 2020. While there will be a ball drop in Times Square on New Year's Eve, it will be primarily for TV cameras as the usual tightly packed crowds of revelers will not be permitted due to the pandemic. (Photo by Seth Wenig/AP Photo) 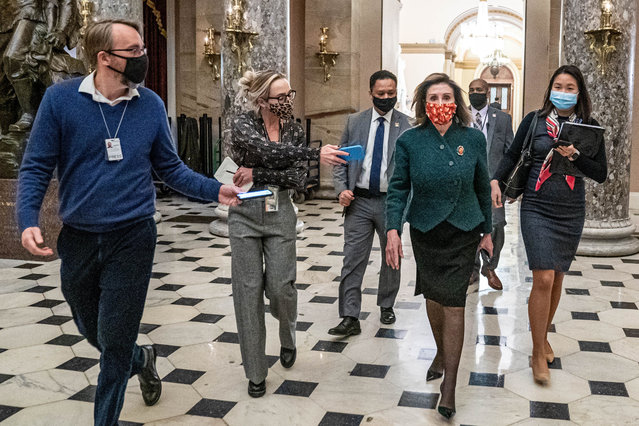 Speaker of the House Nancy Pelosi, D-Calif., walks from the House floor to her office on Capitol Hill in Washington, DC on Monday, December 28, 2020. The House will vote today on a measure to increase direct stimulus payments to Americans to $2,000 each. (Photo by Ken Cedeno/UPI/Rex Features/Shutterstock) 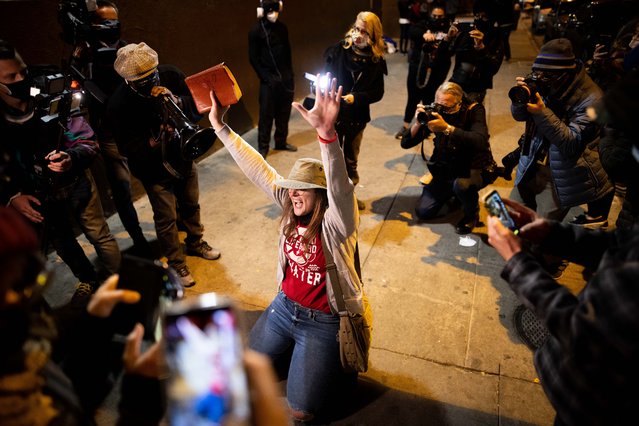 A woman from the “Let Us Worship” group prays during an event to give out food and supplies to the homeless population of Skid Row in Los Angeles California, USA, 30 December 2020. The “Let Us Worship” group has made news after hosting “super-spreader” events around the country, defying local laws and not wearing masks during the coronavirus disease (COVID-19) pandemic. (Photo by Christian Monterrosa/EPA/EFE) 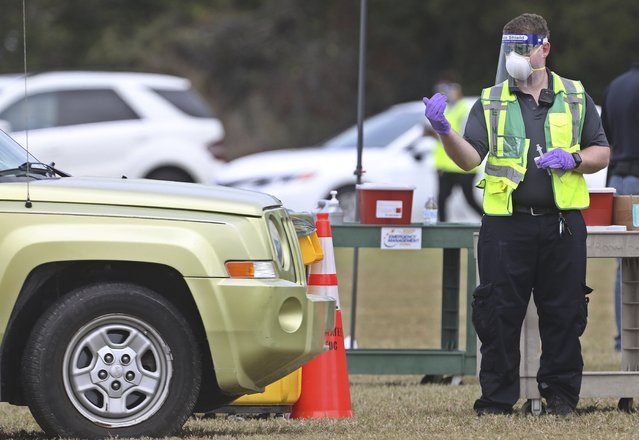 A health worker directs a vehicle before administering a COVID-19 vaccine to one of about 300 people to get vaccinated, Wednesday, December 30, 2020, at the Manatee County Public Safety Center in Bradenton, Fla. (Photo by Scott Keeler/Tampa Bay Times via AP Photo) 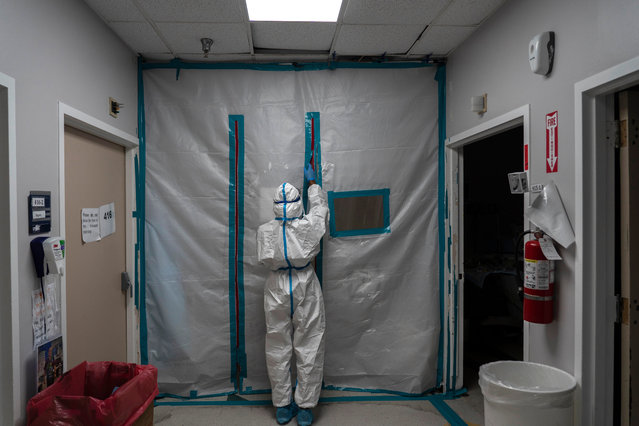 A medical staff exits the COVID-19 intensive care unit (ICU) on New Year's Day at the United Memorial Medical Center on January 1, 2021 in Houston, Texas. According to reports, Texas has reached over 1,760,000 cases, including over 27,800 deaths. (Photo by Go Nakamura/Getty Images) 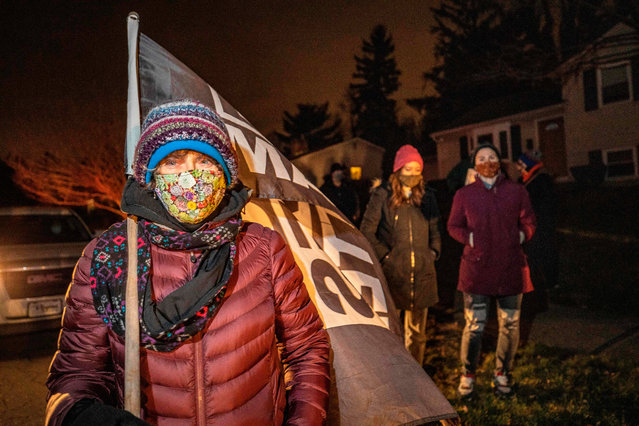 A woman holds a Black Lives Matter flag as she participates in a call to action “White People Stop Calling the Cops on Black People” protest hosted by Showing Up for Racial Justice Columbus(SURJ) in front of the house of the neighbor who called the police on Andre Hill the night he was shot and killed in Columbus, Ohio on December 28, 2020. - A white police officer who shot dead a Black man in Columbus, Ohio, last week was fired on December 28, city officials said The death of Andre Maurice Hill triggered outrage in a country that has been racked by protests against police brutality and systemic racism since the spring. (Photo by Stephen Zenner/AFP Photo) 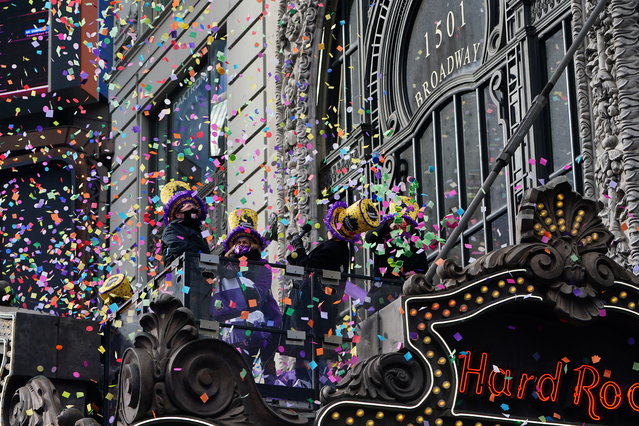 People stand on a balcony and 'flight test' some confetti ahead of the New Year's celebration in Times Square amid the coronavirus disease (COVID-19) pandemic in the Manhattan borough of New York City, New York, U.S., December 29, 2020. (Photo by Carlo Allegri/Reuters) 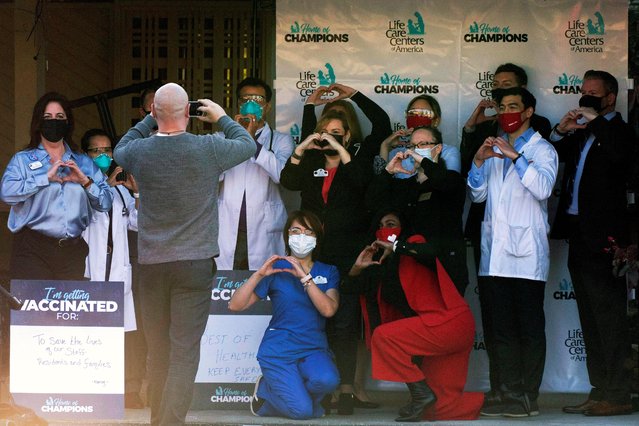 CVS and Life Care Center personnel pose for a group photo as COVID-19 vaccinations begin at Life Care Center of Kirkland, a long-term seniors care facility which was the focus of attention at the start of the U.S. coronavirus disease outbreaks in March 2020, in Kirkland, Washington, U.S. December 28, 2020. (Photo by David Ryder/Reuters) 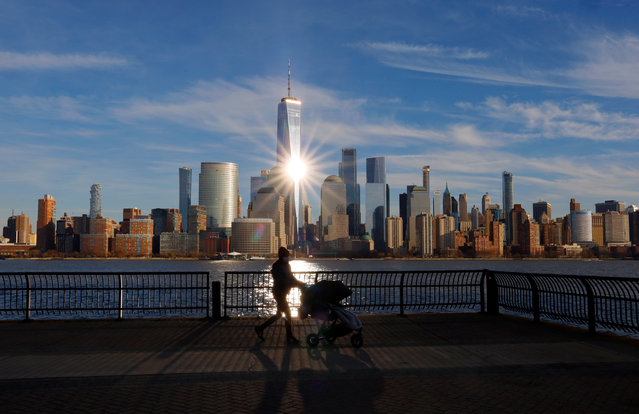 The sun reflects off the windows of One World Trade Center in New York City as a woman walks on a pier on December 27, 2020 in Jersey City, New Jersey. (Photo by Gary Hershorn/Getty Images) 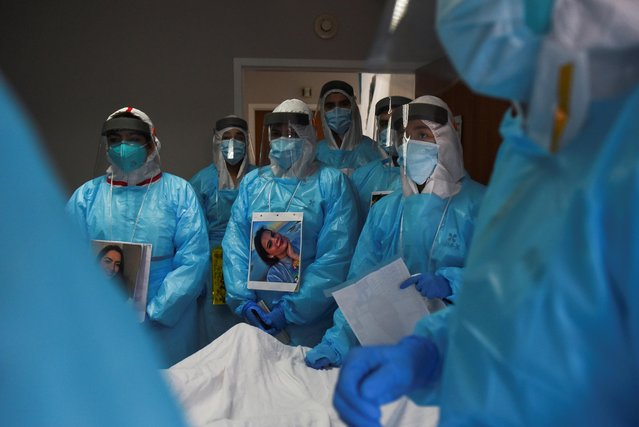 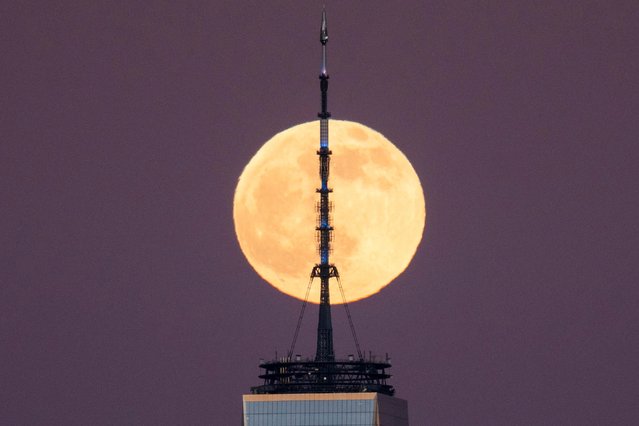 A full moon known as the Cold Moon rises behind the One World Trade Center in New York City as it is seen from Bayonne, New Jersey, U.S. December 29, 2020. (Photo by Eduardo Munoz/Reuters) 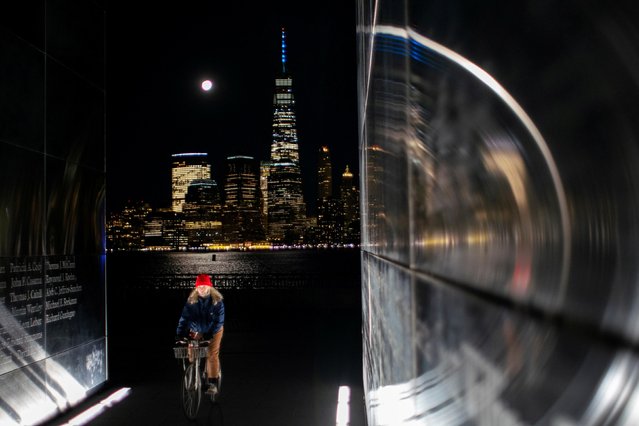 The full moon known as the Cold Moon rises next to One World Trade Center and the New York City skyline as it is seen from Jersey City, New Jersey, U.S. December 29, 2020. (Photo by Eduardo Munoz/Reuters) 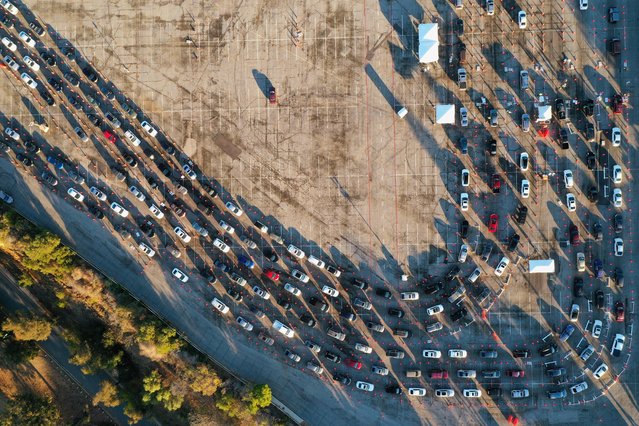 People line up in their vehicles at Dodger Stadium as post-Christmas COVID-19 testing resumes during a surge in positive coronavirus disease cases in Los Angeles, California, December 29, 2020. (Photo by Bing Guan/Reuters) 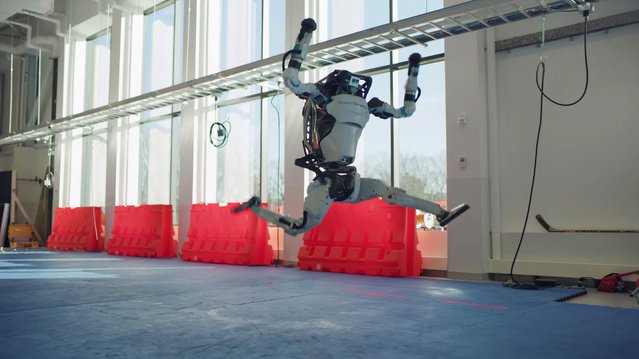 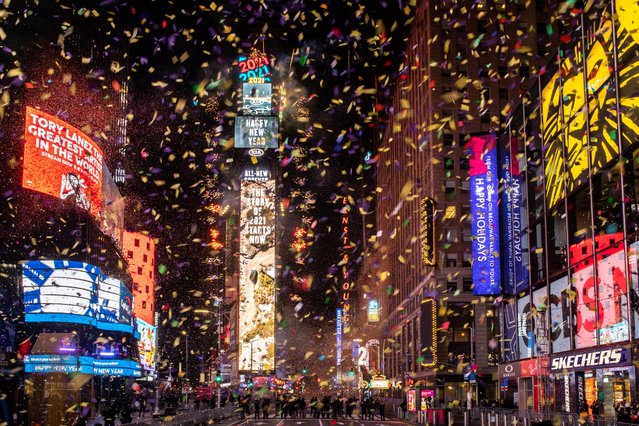 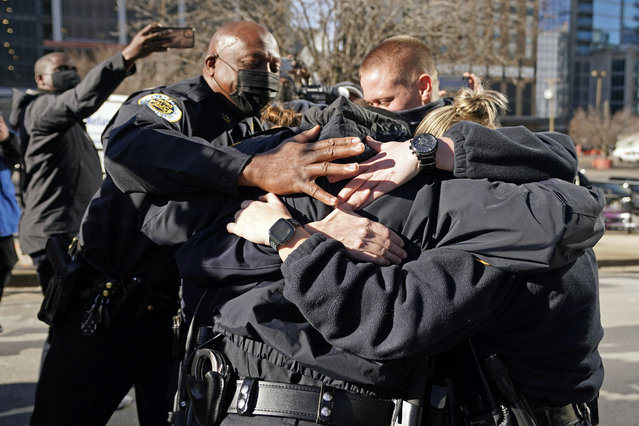 Nashville Police Chief John Drake, left, joins a group of police officers as they embrace after speaking at a news conference Sunday, December 27, 2020, in Nashville, Tenn. The officers are part of a group of officers credited with evacuating people before an explosion took place in downtown Nashville early Christmas morning. (Photo by Mark Humphrey/AP Photo) 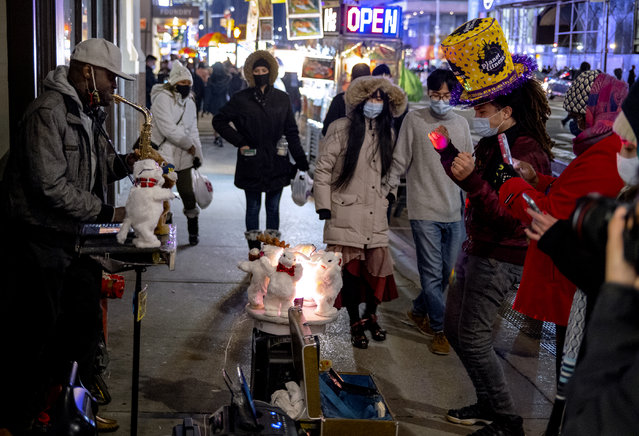 Pedestrians pass by and also watch street entertainment on Eighth Avenue, adjacent to a closed-off Times Square in New York, late Thursday, December 31, 2020, as celebrations have been truncated this New Year's Eve due to the ongoing pandemic. (Photo by Craig Ruttle/AP Photo) 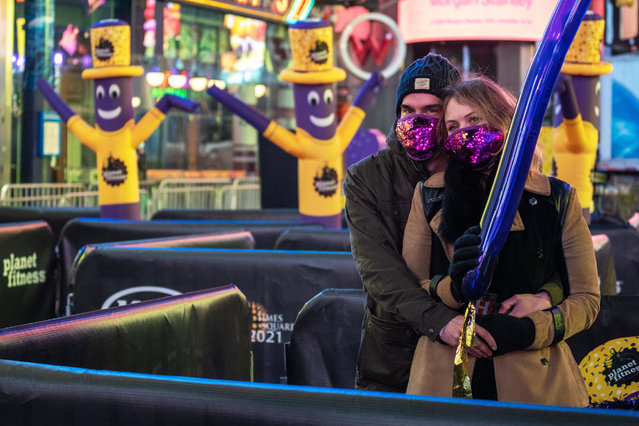 Revelers celebrate New Years Eve in socially distanced pods at Times Square on December 31, 2020, in New York City. On average, about one million revelers are drawn to the Crossroads of the World to watch performances and celebrate the New Year. This year a limited live audience of about 40 first responders and essential workers will be allowed to watch the New Years' ball drop from a secure area in Times Square. (Photo by David Dee Delgado/Getty Images)
Edit Del
05 Jan 2021 00:07:00, post received 0 comments
Publication archive:
←   →
Popular tags:
All tags
Last searches: