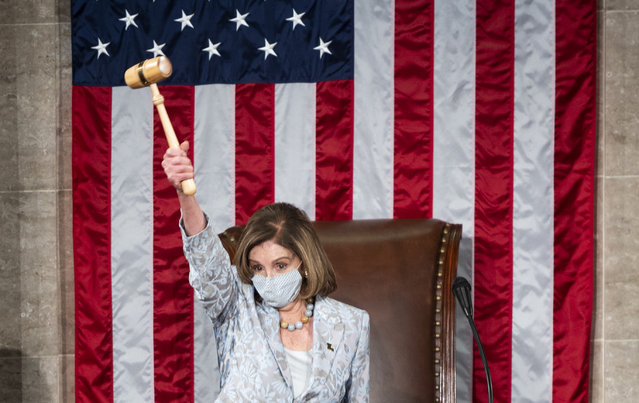 Speaker of the House Nancy Pelosi of Calif., waves the gavel on the opening day of the 117th Congress on Capitol Hill in Washington, Sunday, January 3, 2021. (Photo by Bill Clark/Pool via AP Photo) 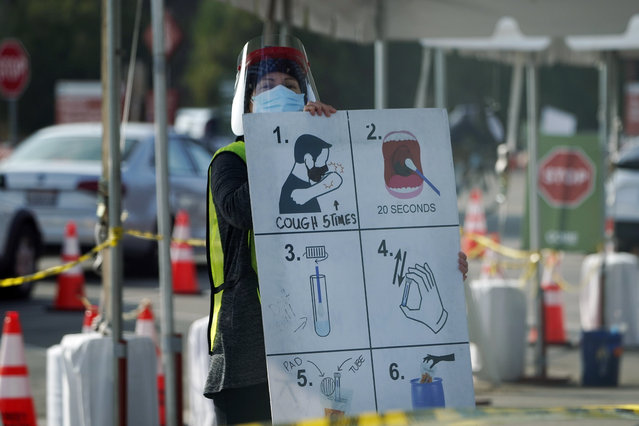 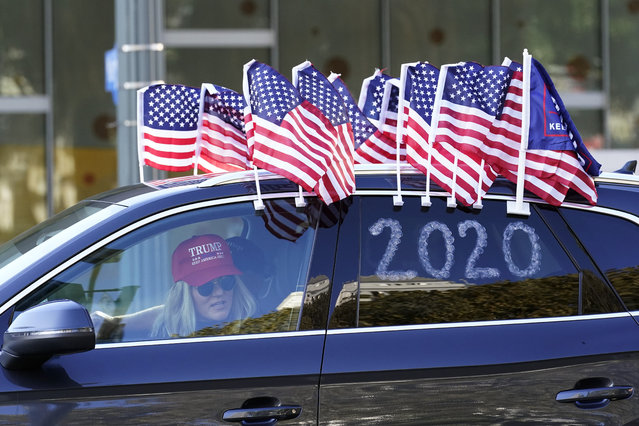 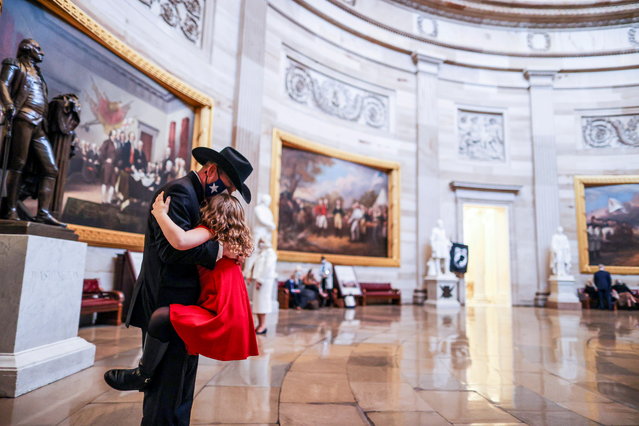 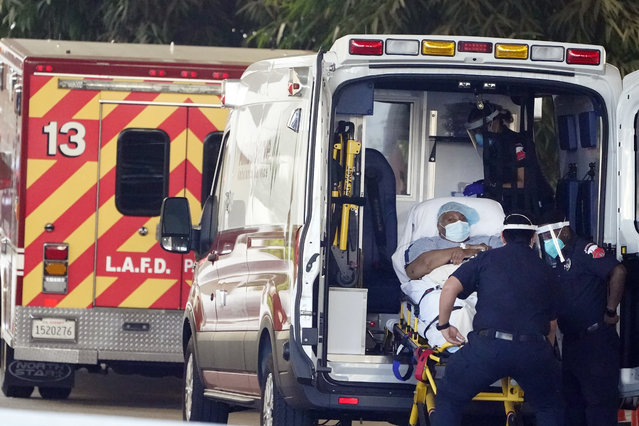 A patient is loaded onto an ambulance outside of the emergency entrance to PIH Health Good Samaritan Hospital Tuesday, January 5, 2021, in Los Angeles. (Photo by Marcio Jose Sanchez/AP Photo) 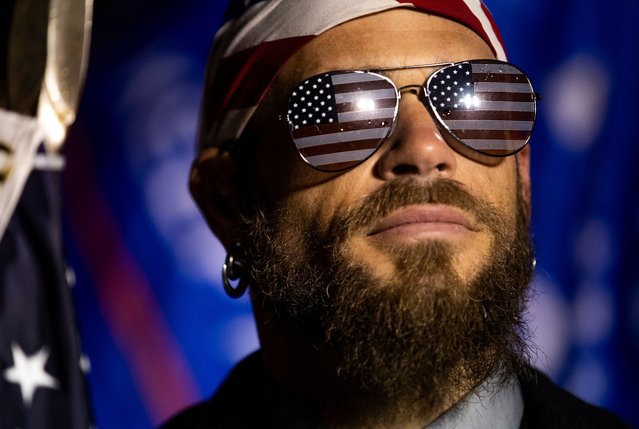 Supporters of US President Donald J. Trump gather for a rally in Freedom Plaza to protest Congress's upcoming certification of Joe Biden as the next president in Washington, DC, USA, 05 January 2021. Various groups of Trump supporters announced rallies on 06 January 2021 as Congress meets to certify the results of the 2020 US Presidential election. (Photo by Shawn Thew/EPA/EFE) 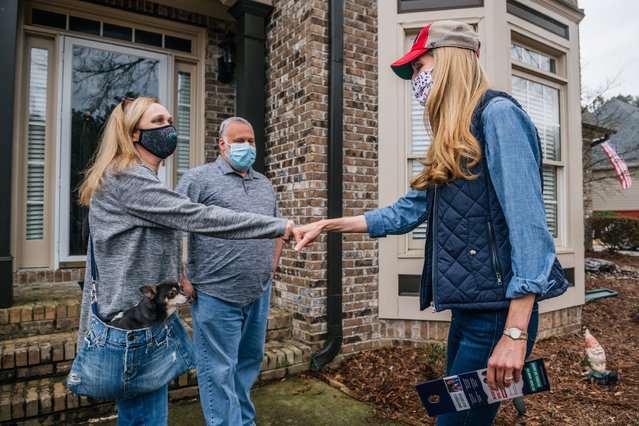 Senator Kelly Loeffler (R), greets neighborhood residents during a canvassing event on January 2, 2021 in Loganville, Georgia. In the lead-up to the January 5 runoff election, Georgia Republican Senator Kelly Loeffler continues to focus on early voting efforts across the state of Georgia. (Photo by Brandon Bell/Getty Images) 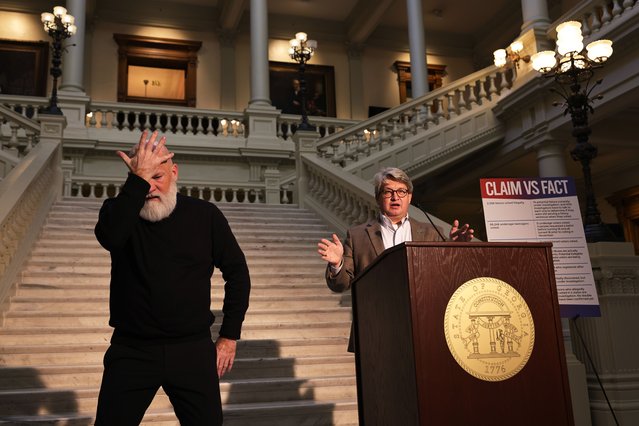 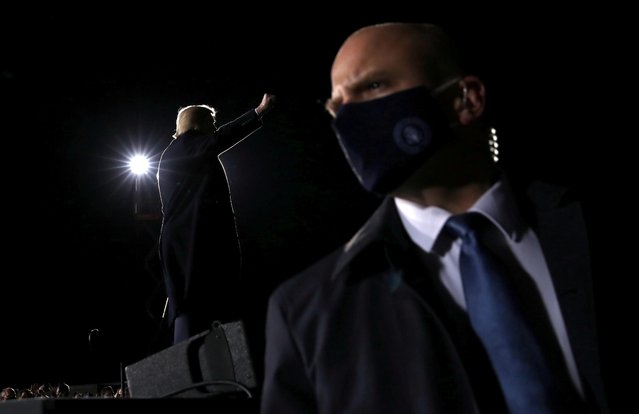 A member of security looks on as U.S. President Donald Trump addresses a campaign rally in Dalton, Georgia, U.S., on the eve of the run-off election to decide both of Georgia's Senate seats January 4, 2021. (Photo by Leah Millis/Reuters) 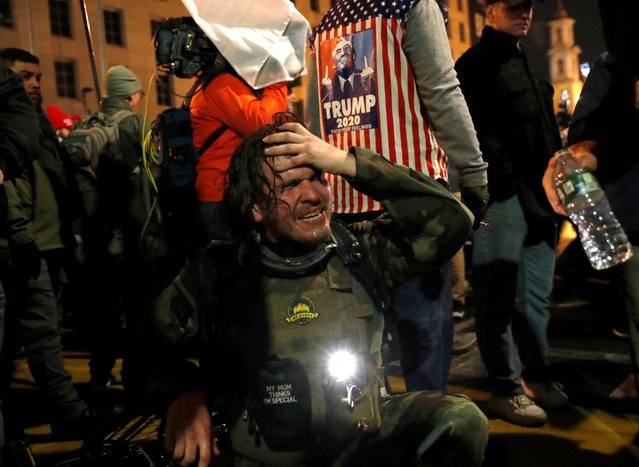 A supporter of U.S. President Donald Trump reacts after being pepper sprayed by police during a protest, in Washington, U.S., ahead of the U.S. Congress certification of the November 2020 election results, January 5, 2021. (Photo by Shannon Stapleton/Reuters) 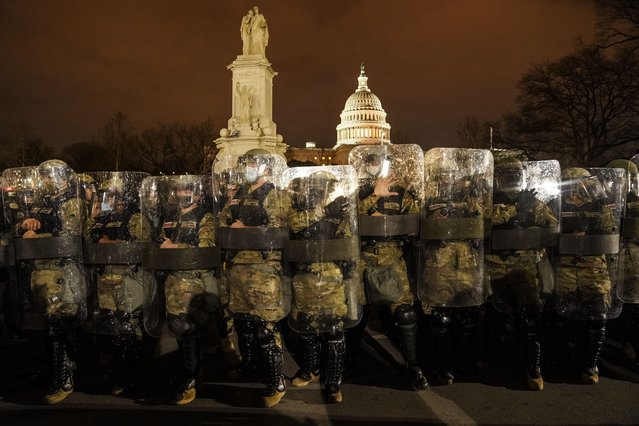 District of Columbia National Guard stand outside the Capitol, Wednesday night, January 6, 2021, after a day of rioting protesters. It's been a stunning day as a number of lawmakers and then the mob of protesters tried to overturn America's presidential election, undercut the nation's democracy and keep Democrat Joe Biden from replacing Trump in the White House. (Photo by John Minchillo/AP Photo) 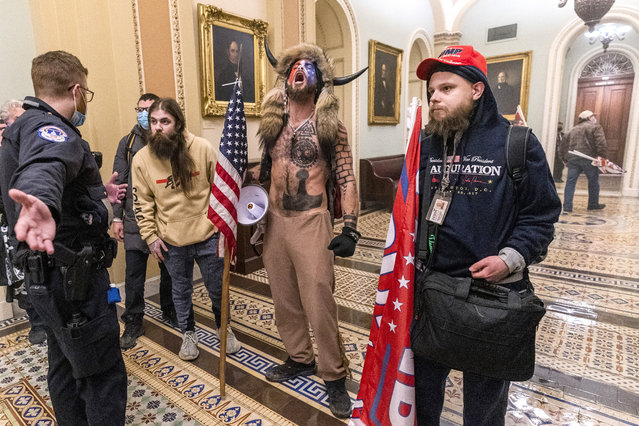 Supporters of President Donald Trump are confronted by Capitol Police officers outside the Senate Chamber inside the Capitol, Wednesday, January 6, 2021 in Washington. (Photo by Manuel Balce Ceneta/AP Photo) 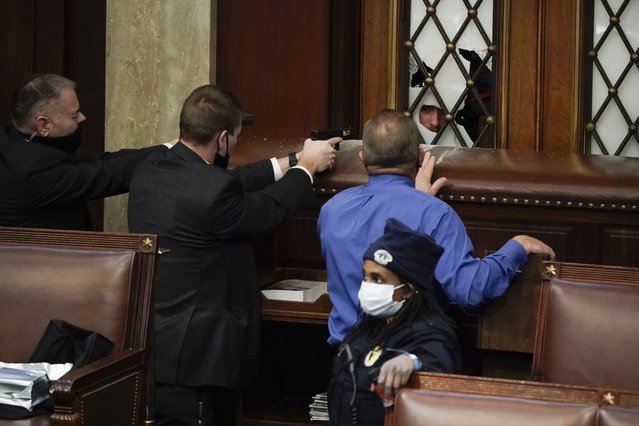 Police with guns drawn watch as protesters try to break into the House Chamber at the U.S. Capitol on Wednesday, January 6, 2021, in Washington. (Photo by J. Scott Applewhite/AP Photo) 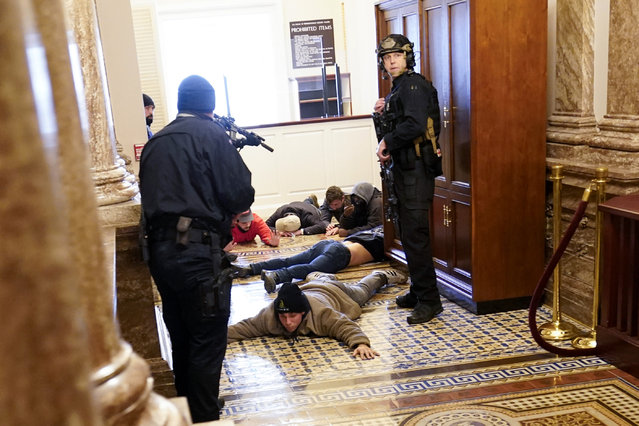 U.S. Capitol Police hold protesters at gun-point near the House Chamber inside the U.S. Capitol on Wednesday, January 6, 2021, in Washington. (Photo by Andrew Harnik/AP Photo) 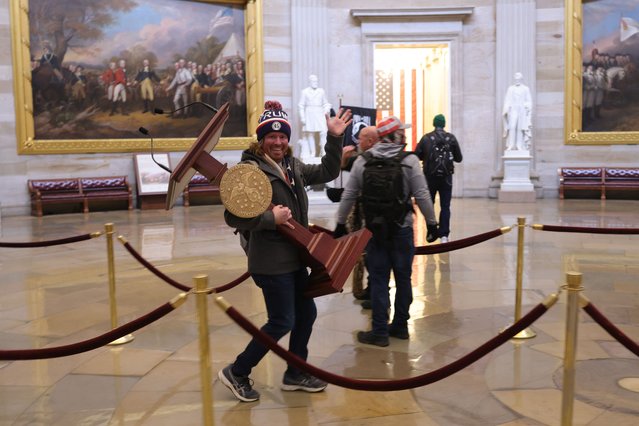 A pro-Trump protester carries the lectern of U.S. Speaker of the House Nancy Pelosi through the Roturnda of the U.S. Capitol Building after a pro-Trump mob stormed the building on January 06, 2021 in Washington, DC. Congress held a joint session today to ratify President-elect Joe Biden's 306-232 Electoral College win over President Donald Trump. A group of Republican senators said they would reject the Electoral College votes of several states unless Congress appointed a commission to audit the election results. (Photo by Win McNamee/Getty Images) 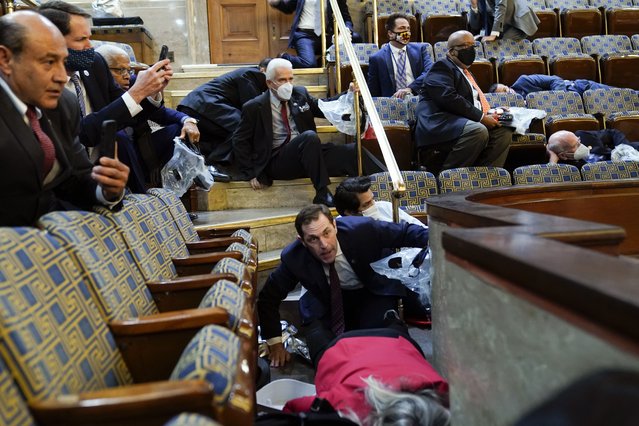 People shelter in the House gallery as protesters try to break into the House Chamber at the U.S. Capitol on Wednesday, January 6, 2021, in Washington. (Photo by Andrew Harnik/AP Photo) 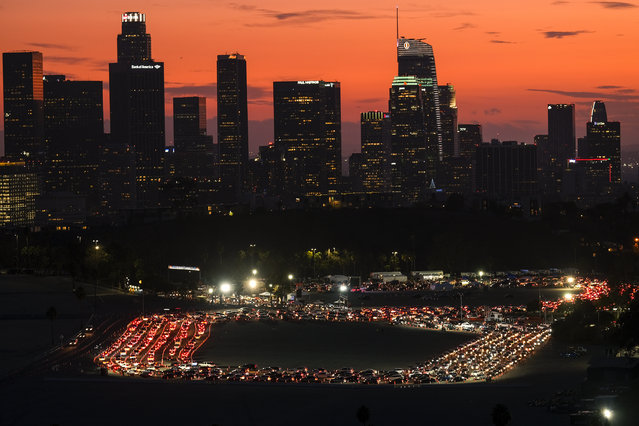 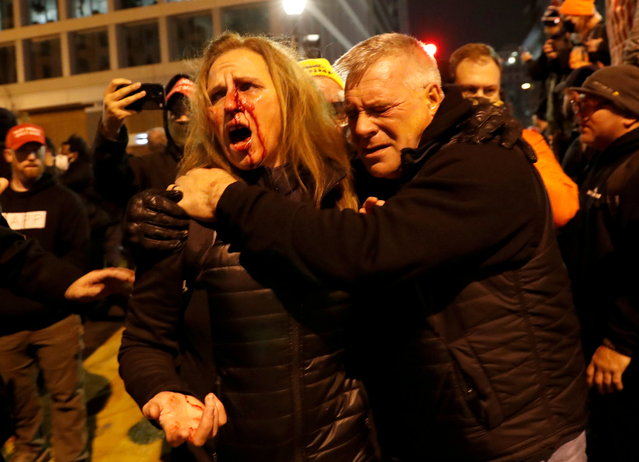 An injured supporter of U.S. President Donald Trump is helped after a clash with counter-protesters during protests in Washington, U.S., ahead of the U.S. Congress certification of the November 2020 election results, January 5, 2021. (Photo by Shannon Stapleton/Reuters) 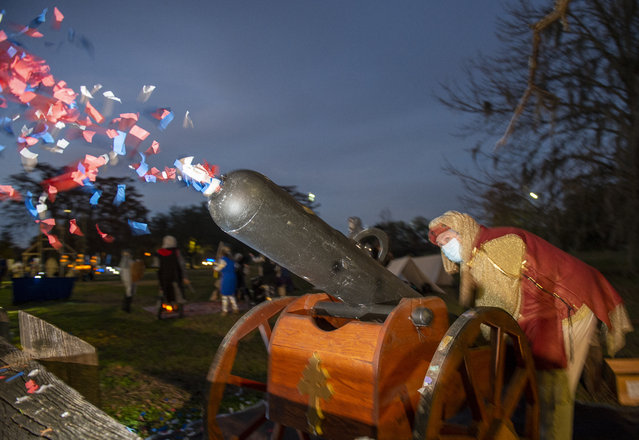 A confetti canon is launched at the Krewe de Jeanne d'Arc drive-thru parade in Behrman Memorial Park in Algiers for the start of Twelfth Night in New Orleans on Wednesday, January 6, 2021. (Photo by Chris Granger/The Times-Picayune/The New Orleans Advocate via AP Photo) 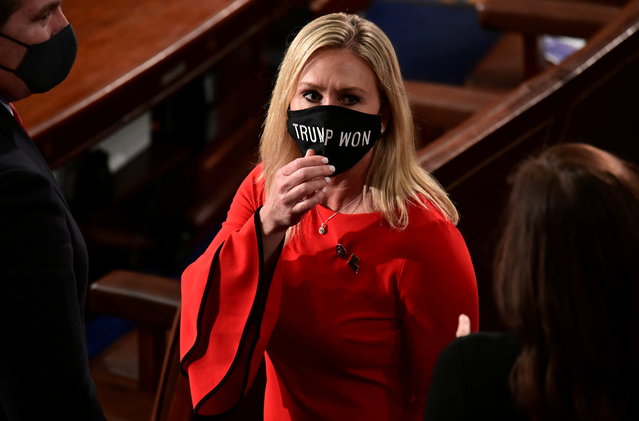 U.S. Rep. Marjorie Taylor Greene (R-GA) wears a “Trump Won” face mask as she arrives on the floor of the House to take her oath of office as a newly elected member of the 117th House of Representatives in Washington, U.S., January 3, 2021. (Photo by Erin Scott/Pool via Reuters) 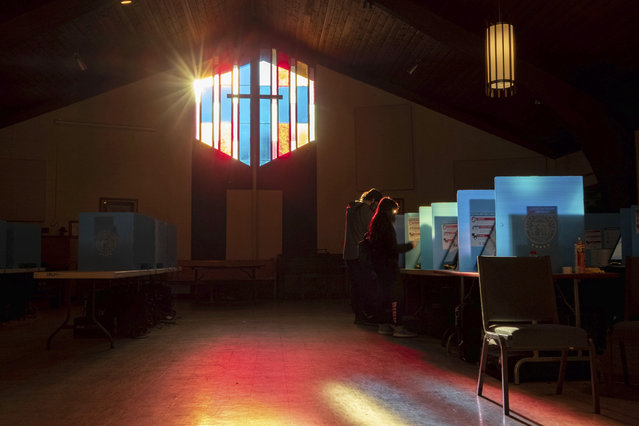 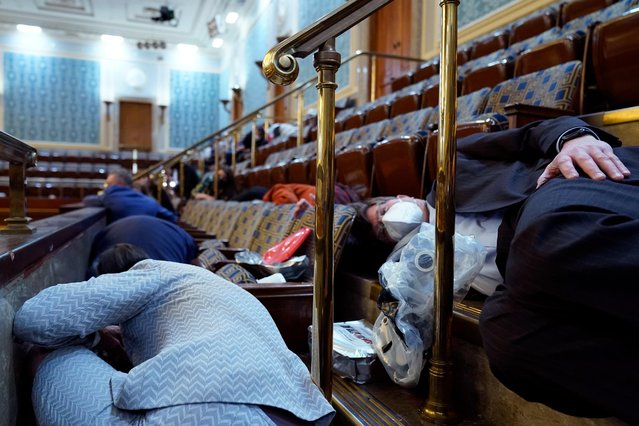