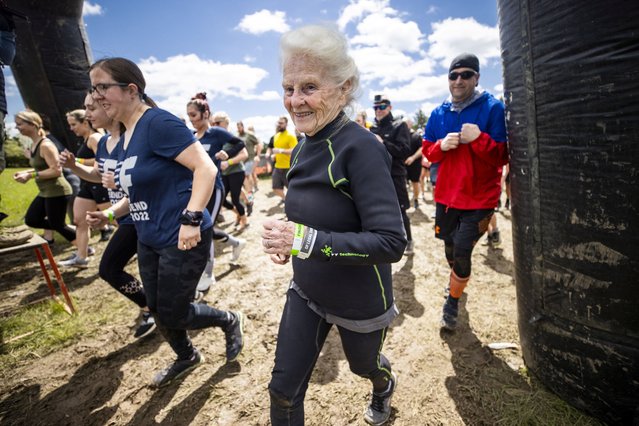 Mildred Wilson and her son Danny during Tough Mudder's Missouri 5K on May 1, 2022. Mildred Wilson, 83, is the oldest person ever to complete the brutal course.Tough Mudder is an endurance race filled with punishing obstacles such as a giant ice bath, a 60-foot watery trench under a steel fence, a dash through 10,000 volts of electricity and a 12-foot wooden ladder with giant rungs named the “Ladder to Hell”. (Photo by Tough Mudder/South West News Service) 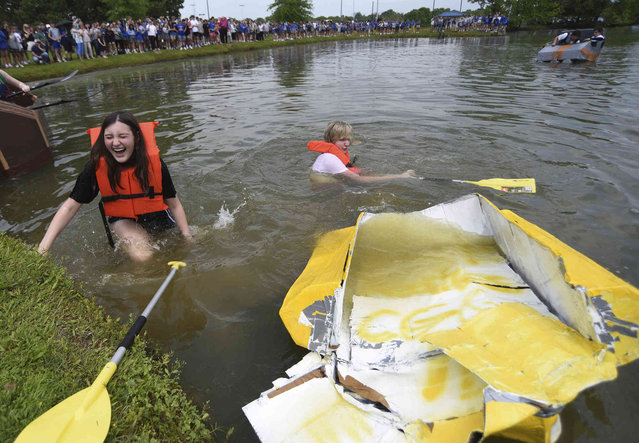 Caroline Greenholtz, 16, and David Browne, 17, are forced to abandon their Beatles-themed Yellow Submarine cardboard boat as it falls apart at Boyd Buchanan School in Chattanooga, Tenn., Wednesday, May 11, 2022. The physics class students were allowed cardboard, duct tape and paint and were tasked with making a boat that could compete in the 25th Annual Physics Boat Race on “Lake Buccaneer” on school property. The two completed the race but the boat began taking on water as they returned to shore. (Photo by Matt Hamilton/Chattanooga Times Free Press via AP Photo) 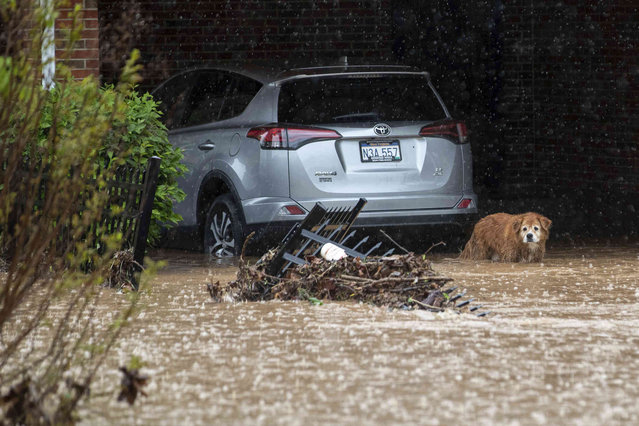 Gertie, a family's 16-year-old dog, looks out over a flooded yard Friday, May 6, 2022, in Huntington, W.Va. The mayor of a West Virginia city issued an emergency declaration Friday after the second large-scale flooding event in Huntington in nine months. (Photo by Sholten Singer/The Herald-Dispatch via AP Photo) 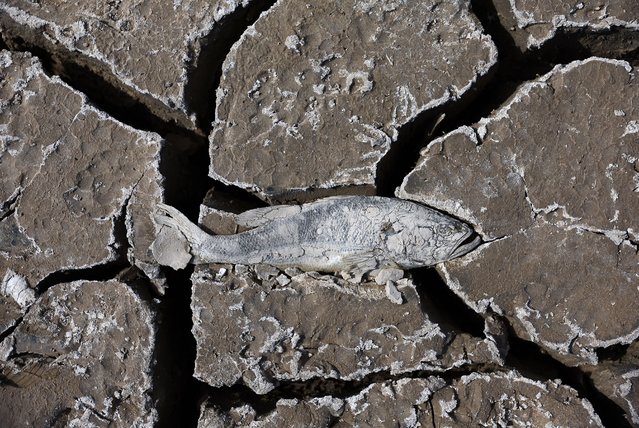 A dead fish rests on a section of dry lakebed along drought-stricken Lake Mead on May 9, 2022 in the Lake Mead National Recreation Area, Nevada. The U.S. Bureau of Reclamation reported that Lake Mead, North America's largest artificial reservoir, has dropped to about 1,052 feet above sea level, the lowest it's been since being filled in 1937 after the construction of the Hoover Dam. Two sets of human remains have been discovered recently as the lake continues to recede. The declining water levels are a result of a climate change-fueled megadrought coupled with increased water demands in the Southwestern United States. (Photo by Mario Tama/Getty Images) 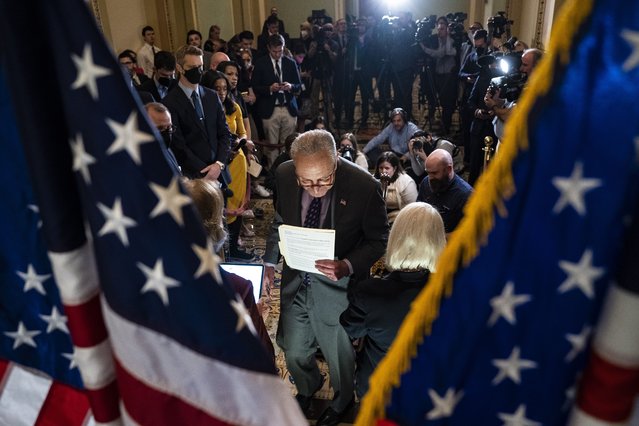 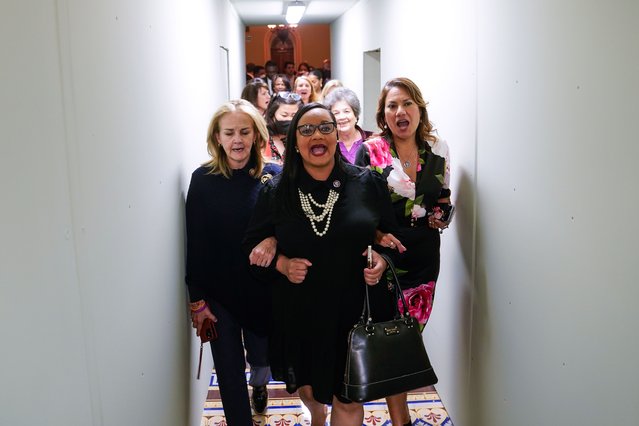 Members of the US House of Representatives protest on their way to the Senate Chamber ahead of a vote on an abortion rights bill on Capitol Hill on Tuesday, May 11, 2022 in Washington, DC. (Photo by Jabin Botsford/The Washington Post) 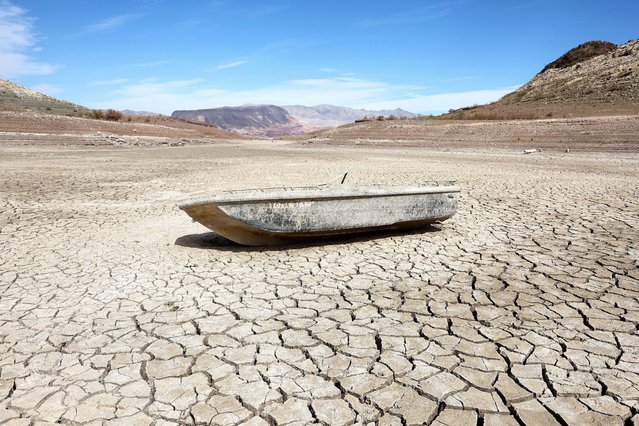 A formally sunken boat rests on a section of dry lakebed along drought-stricken Lake Mead on May 9, 2022 in the Lake Mead National Recreation Area, Nevada. The U.S. Bureau of Reclamation reported that Lake Mead, North America's largest artificial reservoir, has dropped to about 1,052 feet above sea level, the lowest it's been since being filled in 1937 after the construction of the Hoover Dam. Two sets of human remains have been discovered recently as the lake continues to recede. The declining water levels are a result of a climate change-fueled megadrought coupled with increased water demands in the Southwestern United States. (Photo by Mario Tama/Getty Images/AFP Photo) 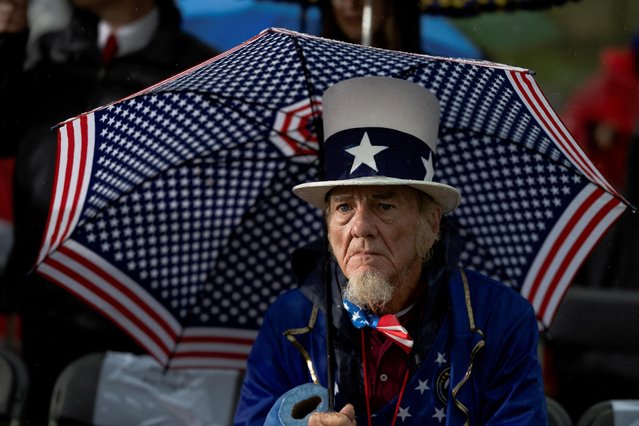 A man holding an umbrella waits for former U.S. President Donald Trump to speak during a rally to boost Pennsylvania Republican U.S. Senate candidate Dr. Mehmet Oz ahead of the May 17 primary election at the Westmoreland Fairgrounds in Greensburg, Pennsylvania, U.S. May 6, 2022. (Photo by Hannah Beier/Reuters) 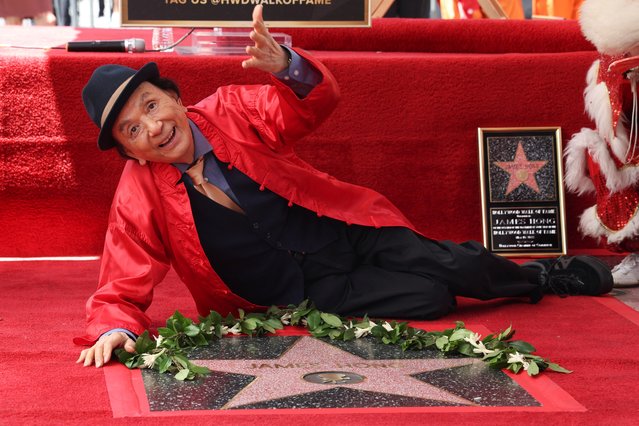 Actor James Hong poses as he unveils his star on the Hollywood Walk of Fame in Los Angeles, California, U.S., May 10, 2022. (Photo by Mario Anzuoni/Reuters) 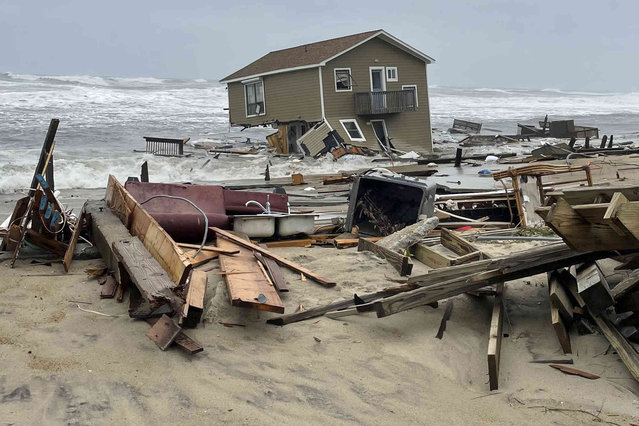 In this image provided by National Park Service, a beach house that collapsed along North Carolina's Outer Banks rest in the water on Tuesday, May 10, 2022, in Rodanthe, N.C. The home was located along Ocean Drive in the Outer Banks community of Rodanthe. The park service has closed off the area and warned that additional homes in the area may fall too. (Photo by National Park Service via AP Photo) 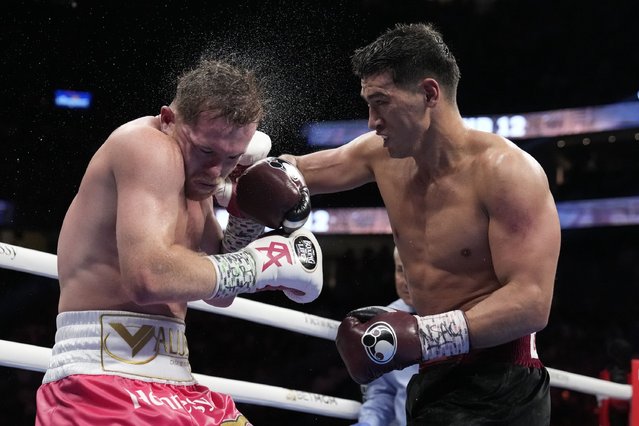 Dmitry Bivol, right, of Kyrgyzstan, throws a punch against Canelo Alvarez, of Mexico, during a light heavyweight title boxing match, Saturday, May 7, 2022, in Las Vegas. (Photo by John Locher/AP Photo) 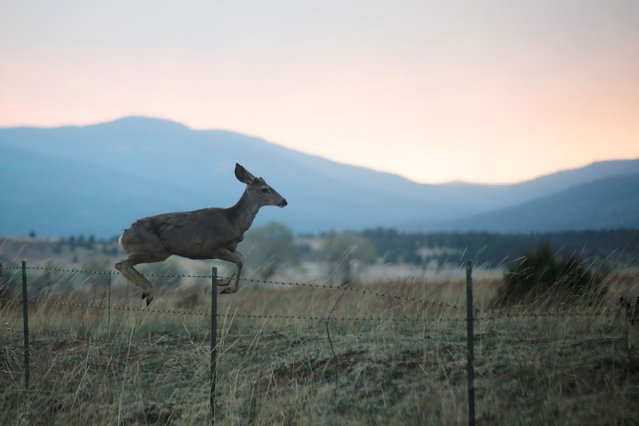 A deer migrates due to the Hermits Peak and Calf Canyon fires, near Ocate, New Mexico, U.S., May 11, 2022. (Photo by Adria Malcolm/Reuters) 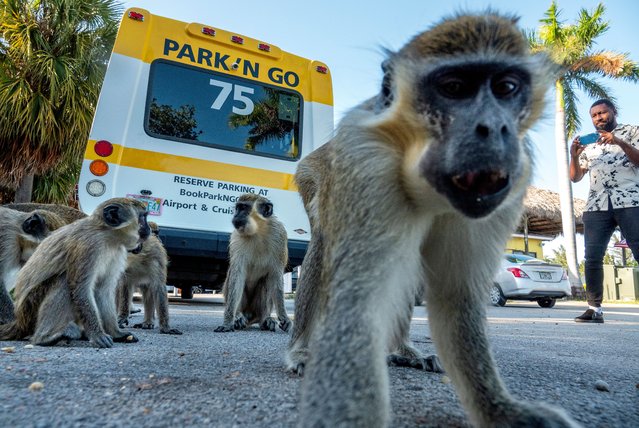 A person takes photos of Vervet monkeys that are eating in a parking lot near the Fort Lauderdale-Hollywood International Airport in Dania Beach, Florida, USA, 10 May 2022. Over 40 descendants of smallish vervets, escaped from now closed breeding facility, are living within 1,500 acres around the Fort Lauderdale-Hollywood International airport. The Dania Beach Vervet Project is an organization established in 2016 with the purpose of promote the conservation, and education about the local free ranging vervet monkeys in Dania Beach, Florida. (Photo by Cristóbal Herrera/EPA/EFE) 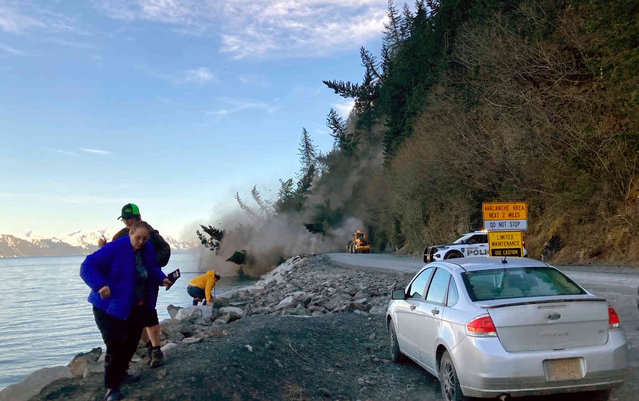 People run from a landslide just outside the downtown area of Seward, Alaska, May 7, 2022. There were no reported injuries in the landslide, which the city estimates could take up to two weeks to clear. (Photo by Josh Gray via AP Photo) 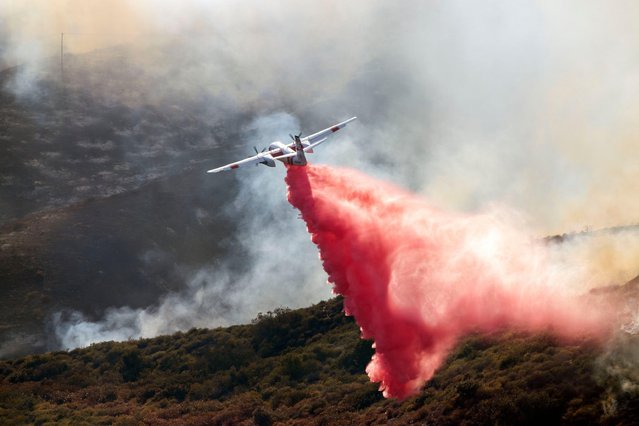 A fire plane drops red fire retardant the Coastal wildfire in Laguna Niguel, California on May 11, 2022. A wind-driven wildfire that broke out Wednesday in brush near Laguna Niguel grew to 200 acres, burned about 20 homes and prompted the evacuation of nearby residences and a luxury resort, fire officials said. (Photo by Ruaridh Stewart/ZUMA Press Wire/Alamy Live News) 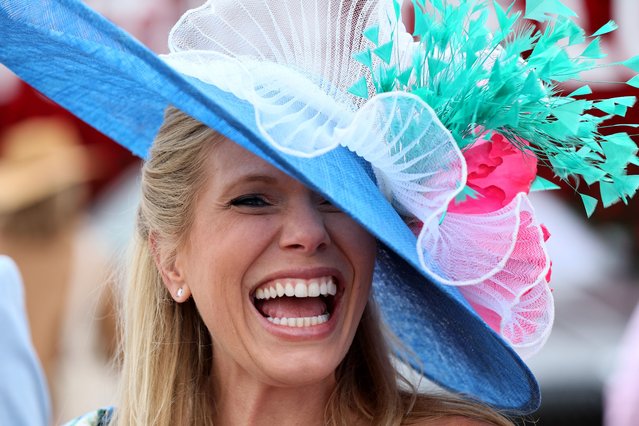 Fans enjoy themselves in the paddock area at the Kentucky Derby at Churchill Downs on May 07, 2022 in Louisville, Kentucky. (Photo by Andy Lyons/Getty Images) 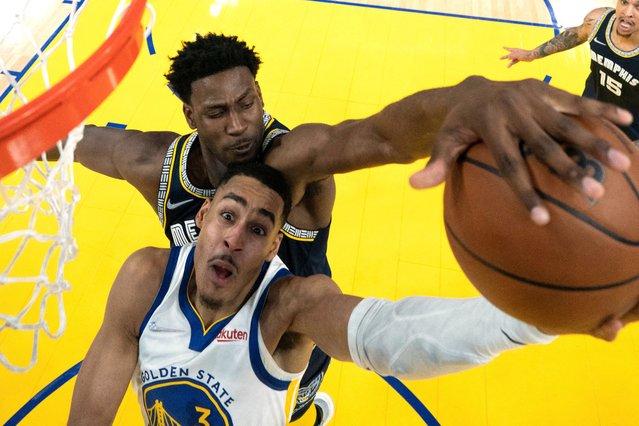 Memphis Grizzlies forward Jaren Jackson Jr. (13) blocks the shot attempt by Golden State Warriors guard Jordan Poole (3) during the first half of game four of the second round for the 2022 NBA playoffs at Chase Center in San Francisco, California on May 9, 2022. (Photo by Kyle Terada/USA TODAY Sports) 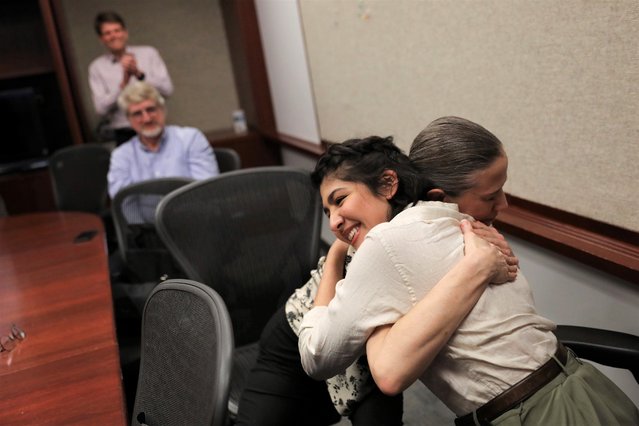 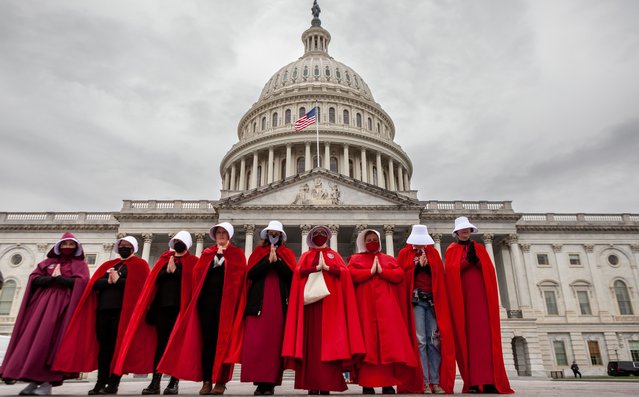 Demonstrators dressed as handmaids from “The Handmaid's Tale”, stand in front of the Capitol on May 8, 2022 during a protest by the Handmaids Army DC of the Supreme Court's leaked preliminary decision to overturn Roe v. Wade. (Photo by Allison Bailey/NurPhoto/Rex Features/Shutterstock) 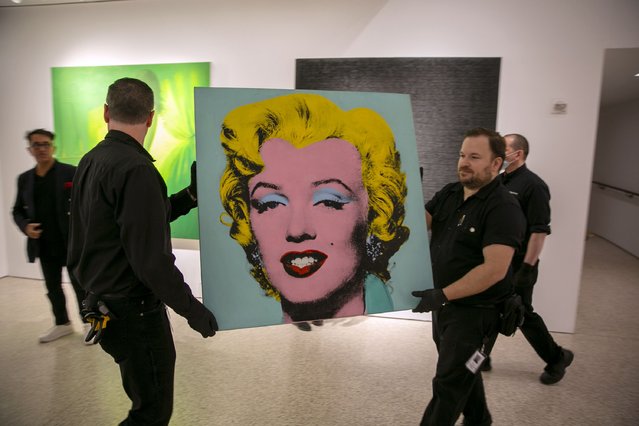 The 1964 painting Shot Sage Blue Marilyn by Andy Warhol is visible in Christie's showroom in New York City on Sunday, May 8, 2022. The auction house predicts it will sell for $200 million on Monday, becoming the most expensive 20th-century artwork to sell at auction. (Photo by Ted Shaffrey/AP Photo) 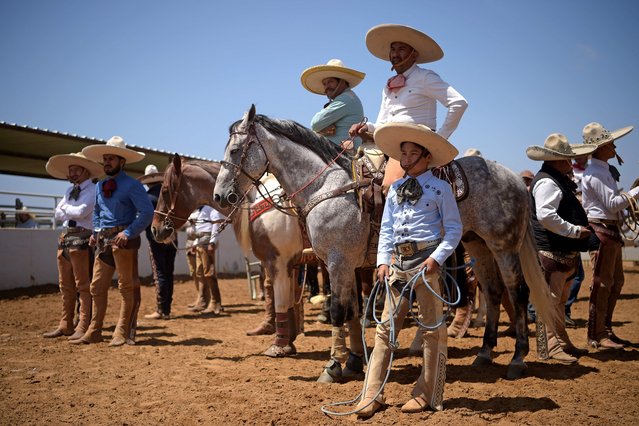 Men wearing traditional charro attire attend a charreria competition at Rancho La Laguna in San Ysidro, south of San Diego near the US-Mexico border, California on May 8, 2022. A charro is a Mexican horseman or cowboy, typically one wearing an elaborate outfit, often with silver decorations, of tight trousers, ruffled shirt, short jacket, and sombrero. The traditional charro competition charreada or charreria (similar to a rodeo) has become the official sport of Mexico and maintains traditional rules and regulations in effect from colonial times up to the Mexican Revolution. (Photo by Agustin Paullier/AFP Photo) 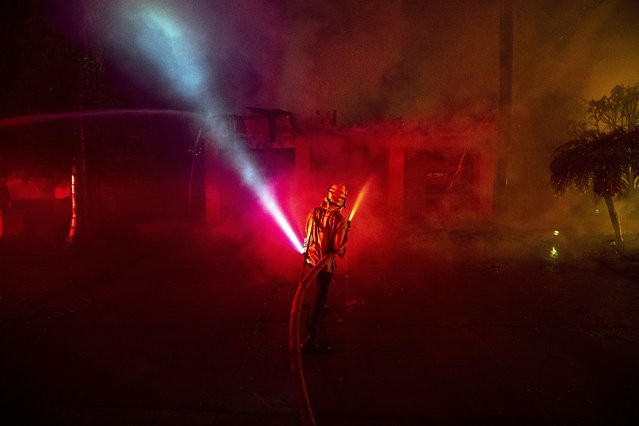 A firefighter works at putting down a house set on fire by the Coastal Fire in Laguna Niguel, California, USA, 11 May 2022. At least 20 homes have been destroyed in the 200 acres fire, said Orange County Fire Authority Chief Brian Fennessy at a night news conference. (Photo by Etienne Laurent/EPA/EFE)
Edit Del
17 May 2022 05:54:00, post received 0 comments
Publication archive:
←   →
Popular tags:
All tags
Last searches: