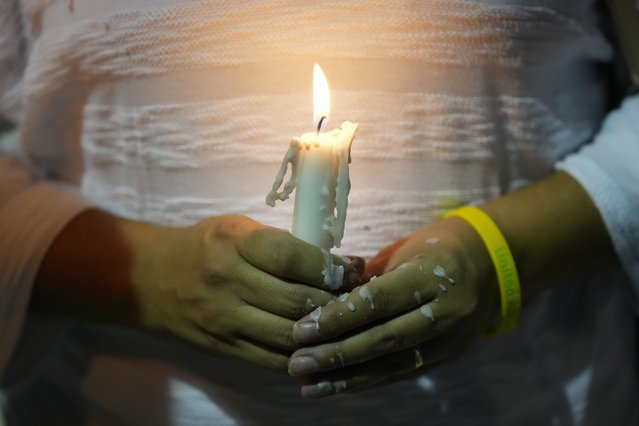 Dislamy Pelayo holds a candle during a multi-faith vigil for victims of the Champlain Towers South condo building collapse, near the site where the building once stood, Thursday, July 15, 2021, in Surfside, Fla. (Photo by Rebecca Blackwell/AP Photo) 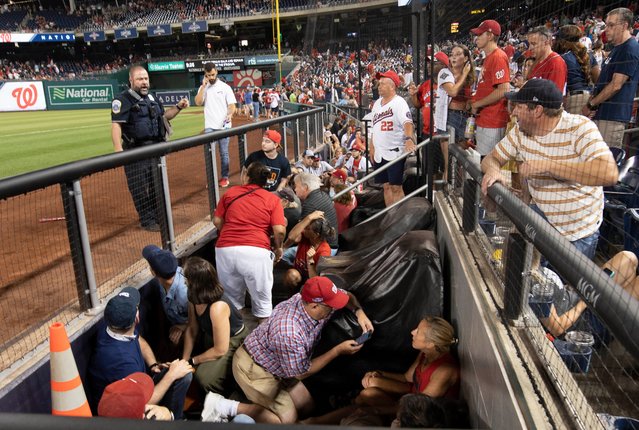 Fans rush to evacuate after hearing gunfire, during a baseball game between the San Diego Padres and the Washington Nationals at Nationals Park in Washington on Saturday July 17, 2021. The game was suspended in the sixth inning after police said there was a shooting outside the stadium. (Photo by John McDonnell/The Washington Post via AP Photo) 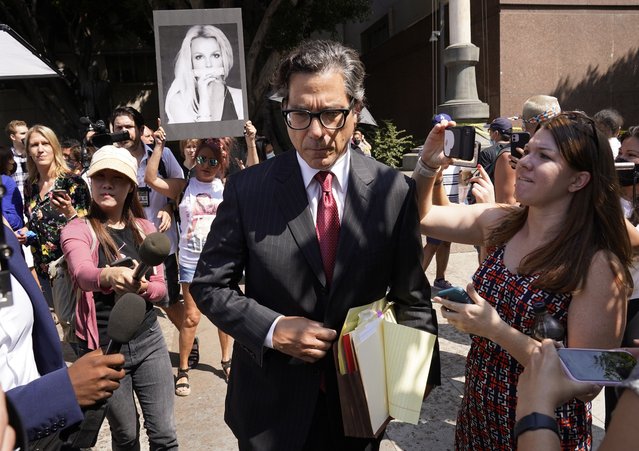 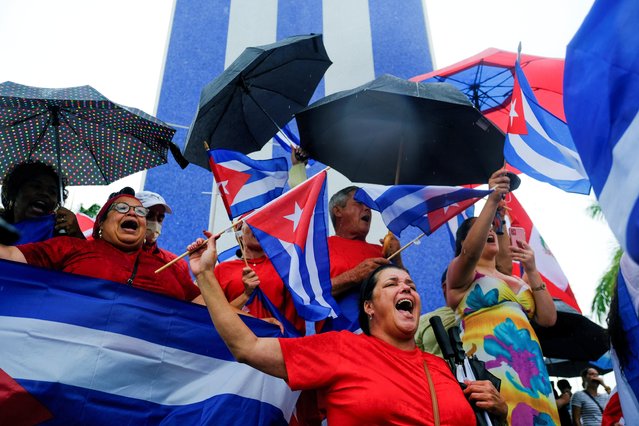 Emigres in the Little Havana neighborhood react as they gather following reports of protests in Cuba against its deteriorating economy, in Miami, Florida, U.S. July 13, 2021. (Photo by Maria Alejandra Cardona/Reuters) 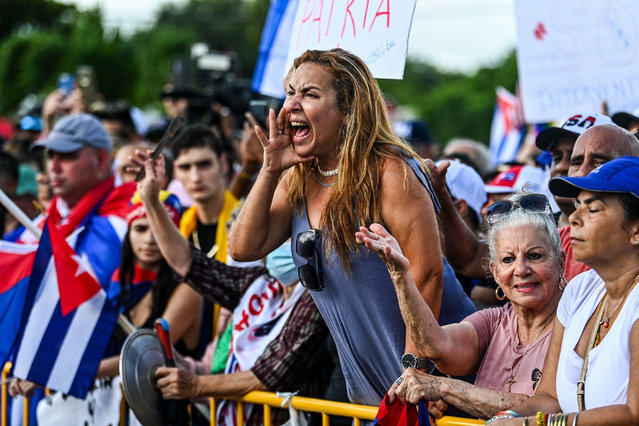 Naima Pineda shouts slogans as she protests to show support for Cubans demonstrating against their government, in Miami, on July 14, 2021. One person has died and more than 100 were arrested, including independent journalists and opposition activists, since the anti-government protests broke out in the communist-ruled island over the worst economic crisis in decades. (Photo by Chandan Khanna/AFP Photo) 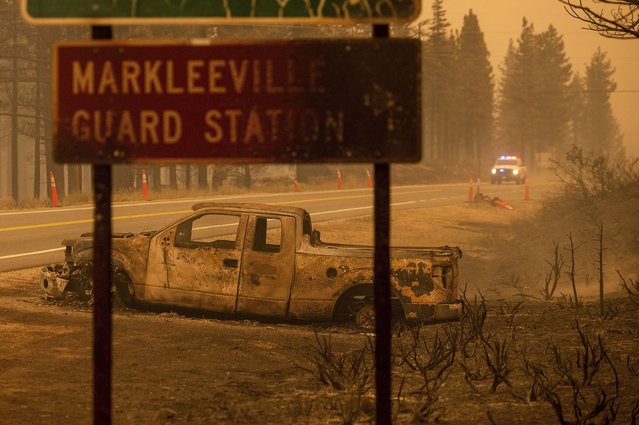 A scorched car rests on a roadside as the Tamarack Fire burns in the Markleeville community of Alpine County, Calif., on Saturday, July 17, 2021. (Photo by Noah Berger/AP Photo) 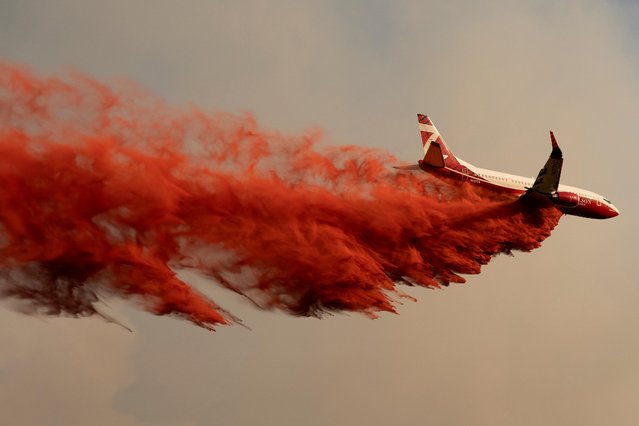 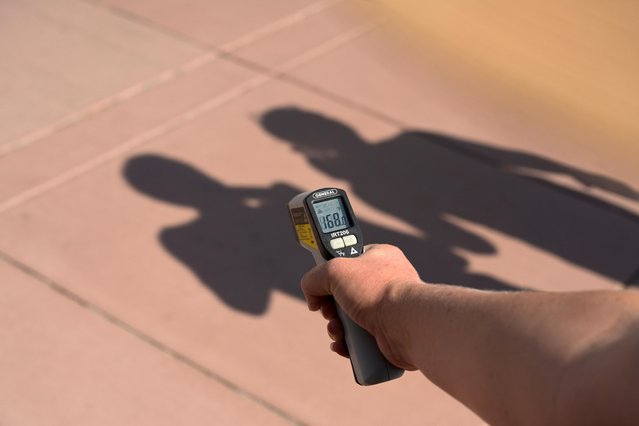 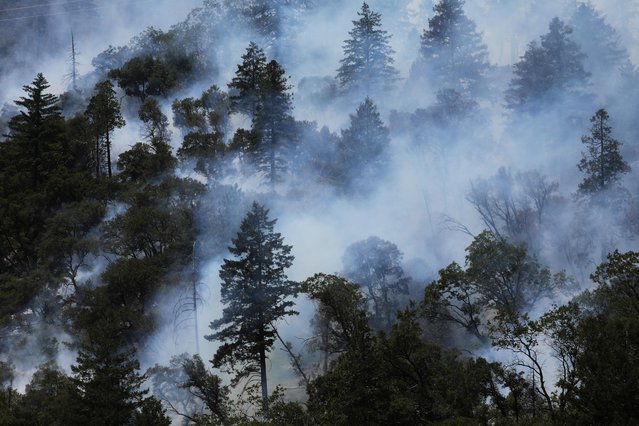 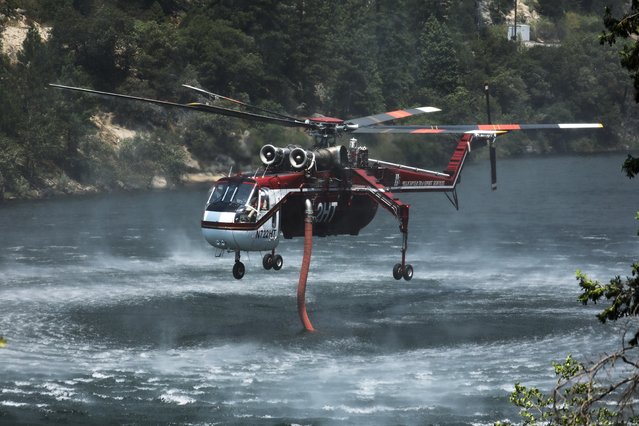 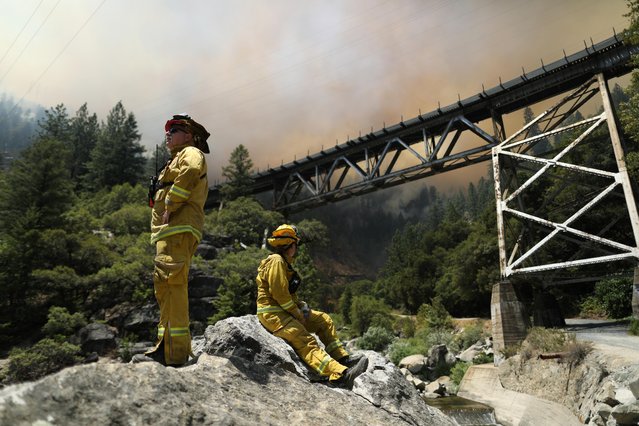 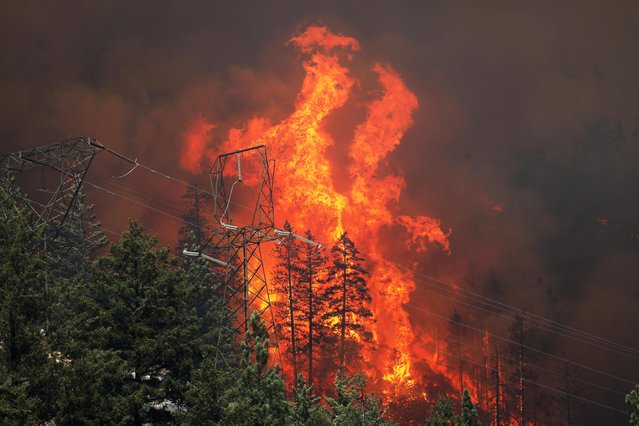 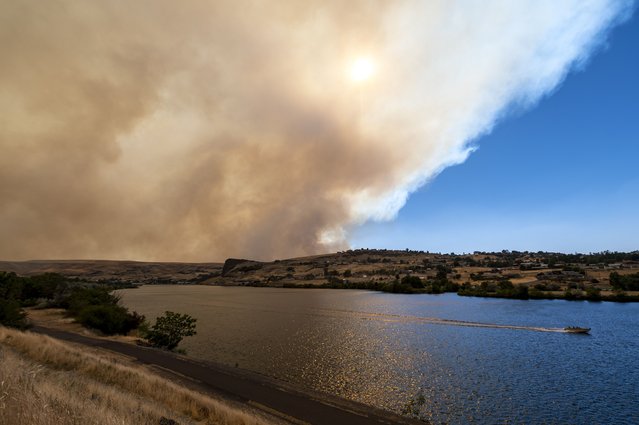 A boat heads down the Snake River as smoke from the Asotin Complex Fire west of Clarkston, Wash., wafts eastward into Lewiston, Idaho on Wednesday, July 7, 2021. (Photo by Pete Caster/The Lewiston Tribune via AP Photo) 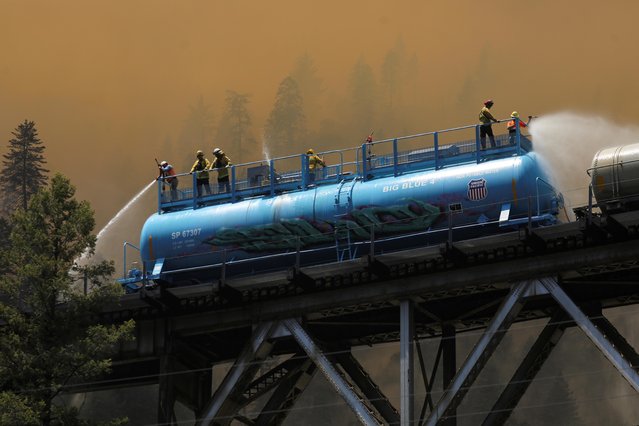 Firefighters spray water from a fire train to hot spots along the tracks over Rock Creek Bridge as the Dixie Fire grows in Plumas National Forest, California, U.S., July 15, 2021. (Photo by David Swanson/Reuters) 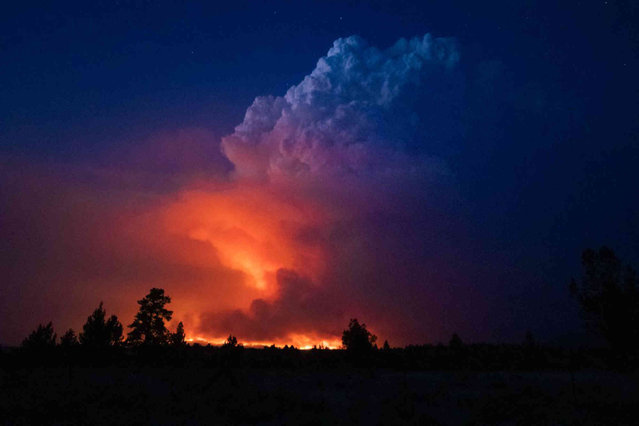 In this photo provided by the Oregon Office of State Fire Marshall, flames and smoke rise from the Bootleg fire in southern Oregon on Wednesday, July 14, 2021. The largest fire in the U.S. on Wednesday was burning in southern Oregon, to the northeast of the wildfire that ravaged a tribal community less than a year ago. The lightning-caused Bootleg fire was encroaching on the traditional territory of the Klamath Tribes, which still have treaty rights to hunt and fish on the land, and sending huge, churning plumes of smoke into the sky visible for miles. (Photo by John Hendricks/Oregon Office of State Fire Marshal via AP Photo) 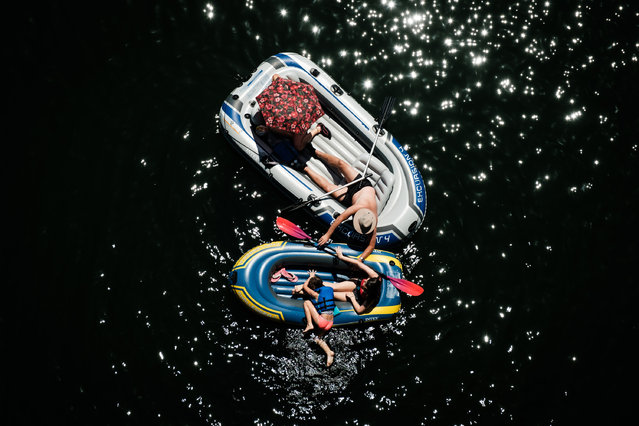 A family floats in Lake Natoma in Folsom, California on July 10, 2021. California's Central Valley is under an “excessive heat warning” through the weekend with temperatures up to 115 degrees forecasted. (Photo by Max Whittaker for The Washington Post) 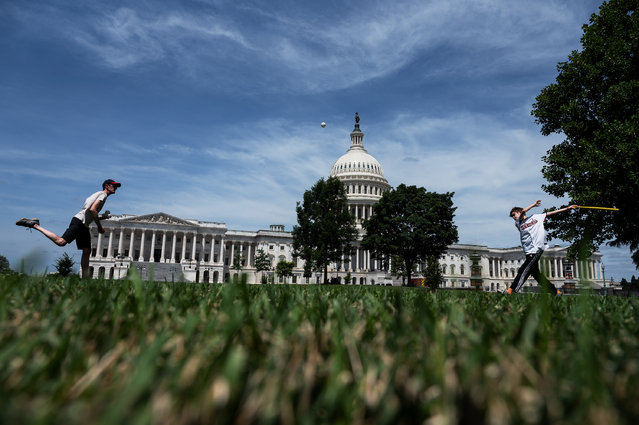 Brian Scott plays Wiffle Ball with his son Jacob, 12, outside of the reopened East Front of the U.S. Capitol in Washington, DC, on July 10, 2021. (Photo by Craig Hudson for The Washington Post) 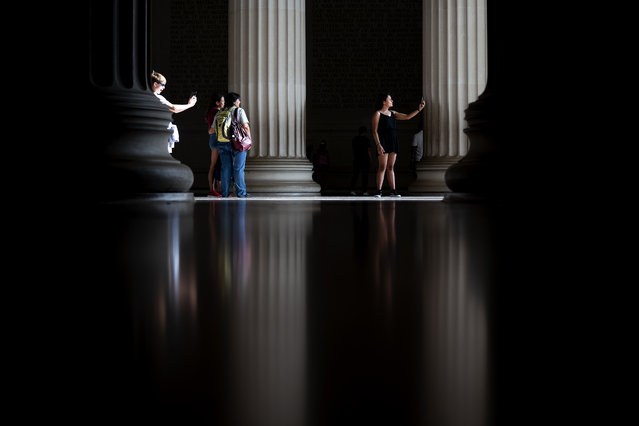 Visitors take photos at the Lincoln Memorial in Washington DC on July 12, 2021. (Photo by Stefani Reynolds for The Washington Post) 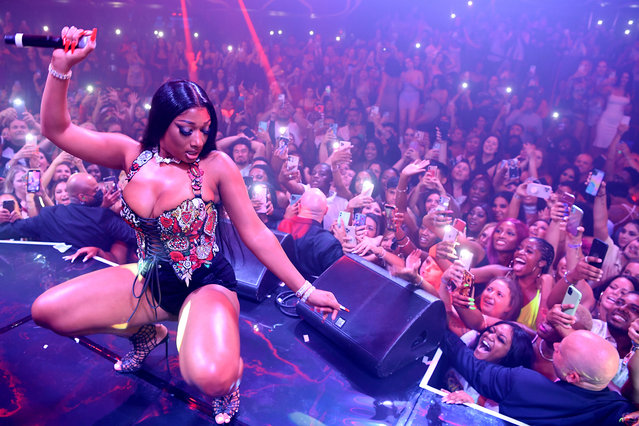