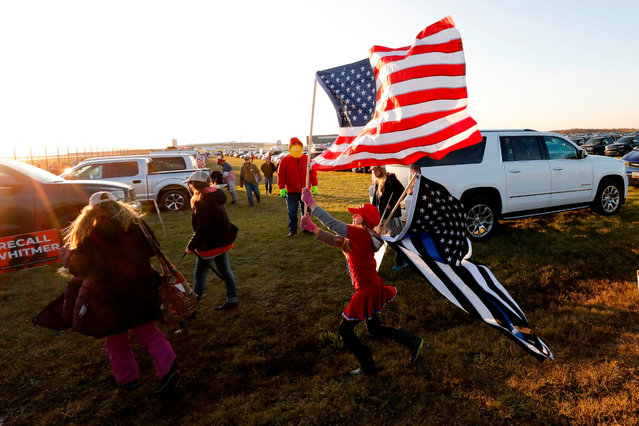 A young woman plays with flags as supporters of US President Donald Trump arrive to attend his final Make America Great Again rally of the 2020 US Presidential campaign at Gerald R. Ford International Airport on November 2, 2020, in Grand Rapids, Michigan. (Photo by Jeff Kowalsky/AFP Photo) 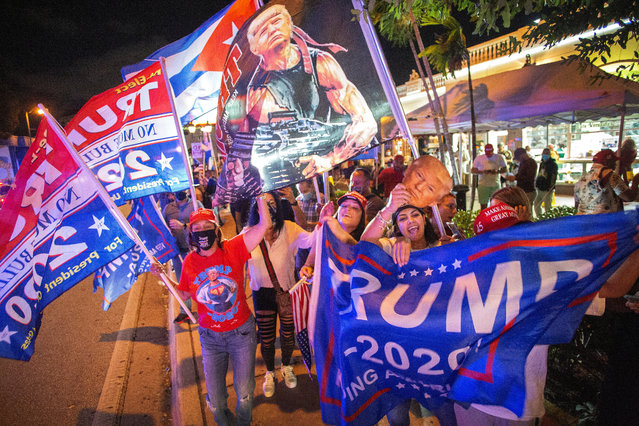 US President Donald Trump’s supporters celebrate in front of the Versailles restaurant in Miami, Florida, USA, 03 November 2020. Americans vote on Election Day to choose between re-electing Donald J. Trump or electing Joe Biden as the 46th President of the United States to serve from 2021 through 2024. (Photo by Cristobal Herrera-Ulashkevich/EPA/EFE) 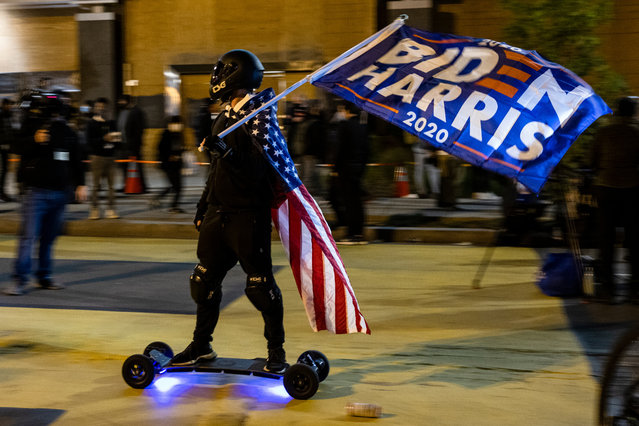 A man with an American flag on his back and a Biden/Harris campaign flag rides an electronic skateboard through Black Lives Matter Plaza in front of the White House on Election Day, November 3, 2020 in Washington, DC. This year's historic presidential election between President Donald Trump, the incumbent, and Democratic nominee Joe Biden begins to come to a close even though final results are not expected for days to come as states take longer to count historic levels of mail-in ballots. (Photo by Samuel Corum/Getty Images) 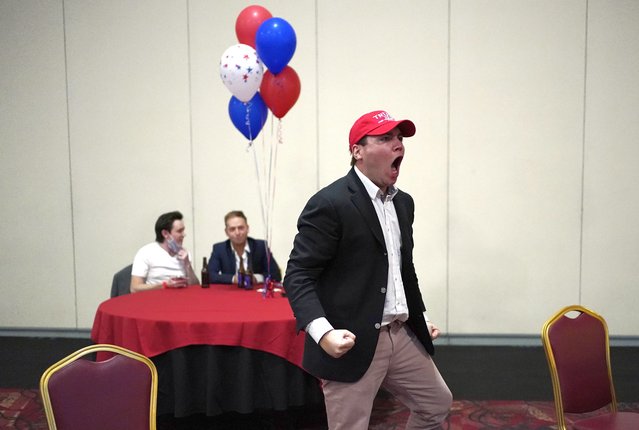 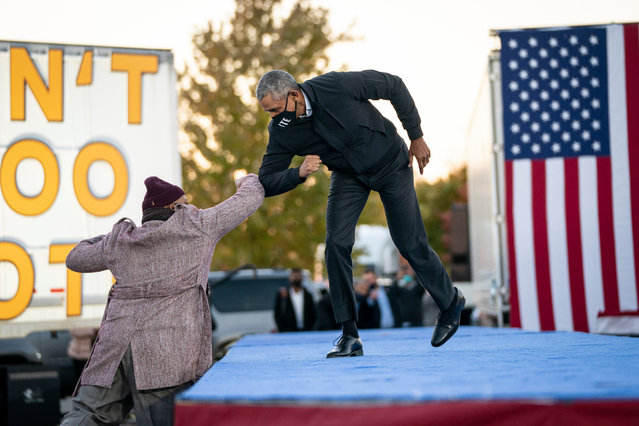 Former President Barack Obama bumps elbows with Tarence Wheeler, CEO of the Tarence Wheeler Foundation, as he arrives to speak during a drive-in campaign rally with Democratic presidential nominee Joe Biden at Belle Isle on October 31, 2020 in Detroit, Michigan. Biden is campaigning with Obama on Saturday in Michigan, a battleground state that President Donald Trump narrowly won in 2016. (Photo by Drew Angerer/Getty Images) 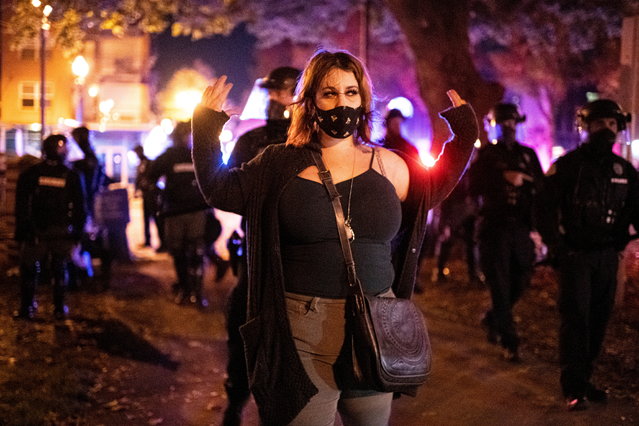 A protester holds up her hands as police detain other protesters and clear a park after a vigil and march marking the shooting death by police of Black man Kevin E. Peterson Jr. in Vancouver, Washington, U.S. October 31, 2020. (Photo by Mathieu Lewis-Rolland/Reuters) 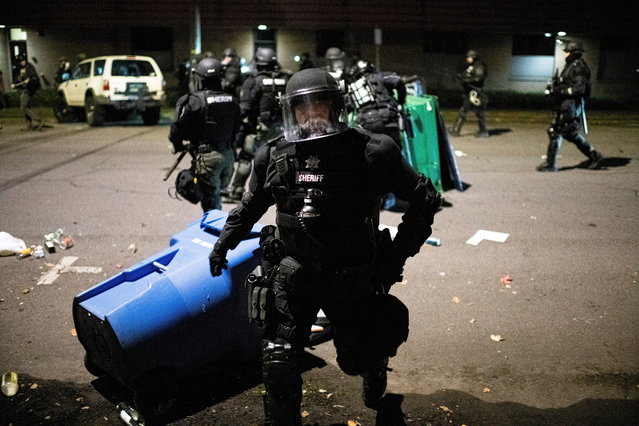 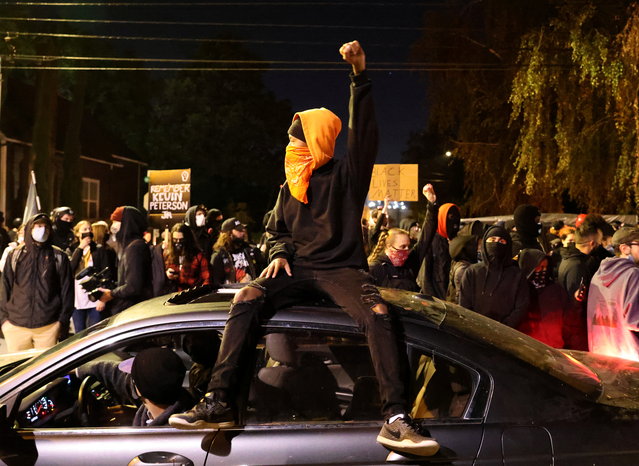 A demonstrator holds up a fist during a protest in Vancouver, Washington, U.S. October 31, 2020. (Photo by Goran Tomasevic/Reuters) 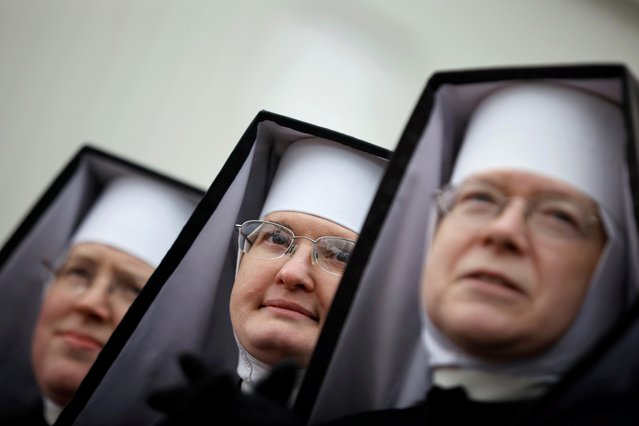 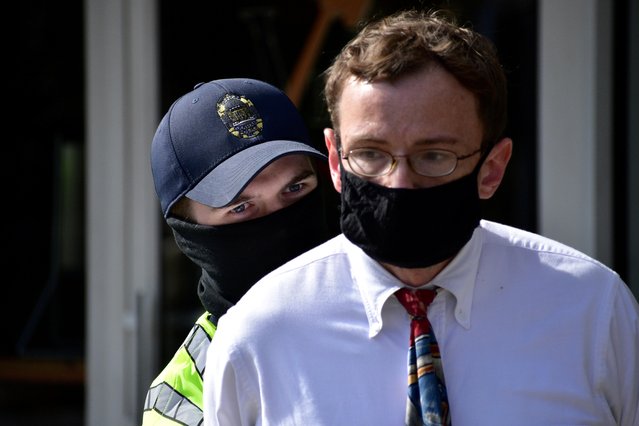 Tomas Murawski, a reporter from The Alamance News is detained by a Graham Police officer after a moment of silence during a Get Out The Vote march in Graham, North Carolina, October 31, 2020. (Photo by Anthony Crider/Handout via Reuters) 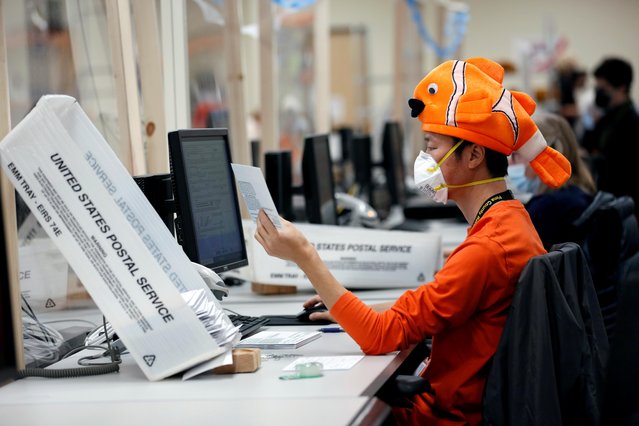 An employee wears a halloween costume while processing early voting and absentee ballots ahead of the upcoming presidential election in Tucson, Arizona, October 31, 2020. (Photo by Cheney Orr/Reuters) 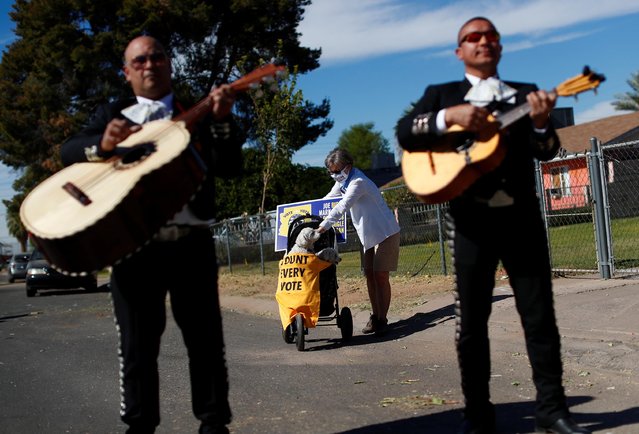 A woman tends to her dog in a pram with the words “count every vote” as mariachi musicians play, during an event to promote the importance of the Latino vote and support for Joe Biden, in the majority Hispanic neighbourhood of Maryvale in Phoenix, Arizona on October 31, 2020. (Photo by Edgard Garrido/Reuters) 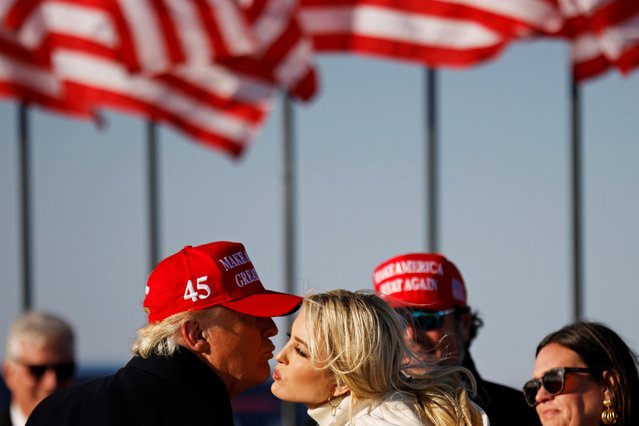 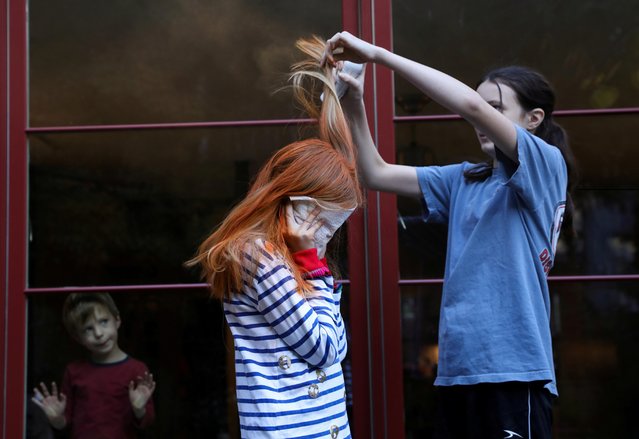 Jane Hassebroek helps her sister Lydia to dye her hair for a Chuckie costume for Halloween at their home, as the coronavirus disease (COVID-19) outbreak continues, in New York, U.S., October 31, 2020. (Photo by Caitlin Ochs/Reuters) 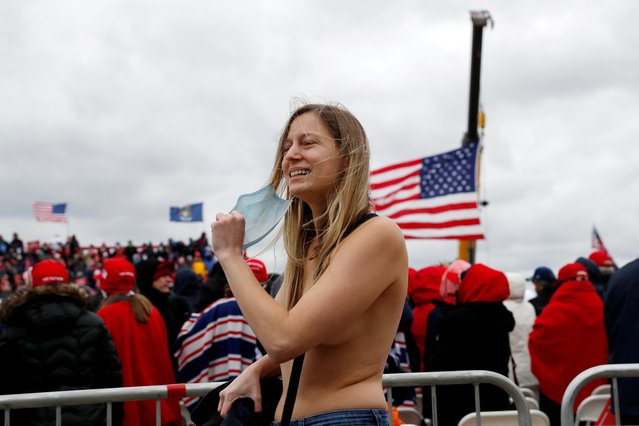 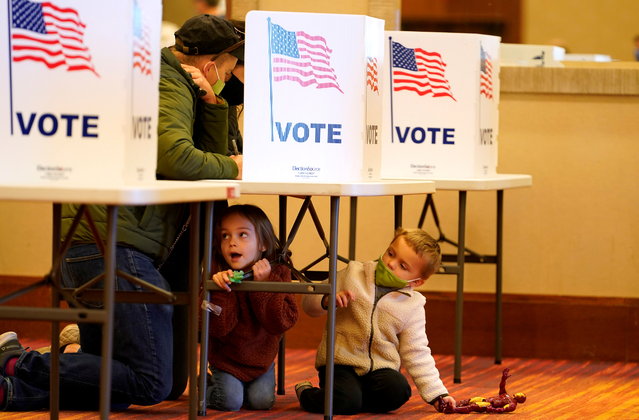 People fill out their ballots at a polling center on the Election Day in Jeffersontown, Kentucky, U.S. November 3, 2020. (Photo by Bryan Woolston/Reuters) 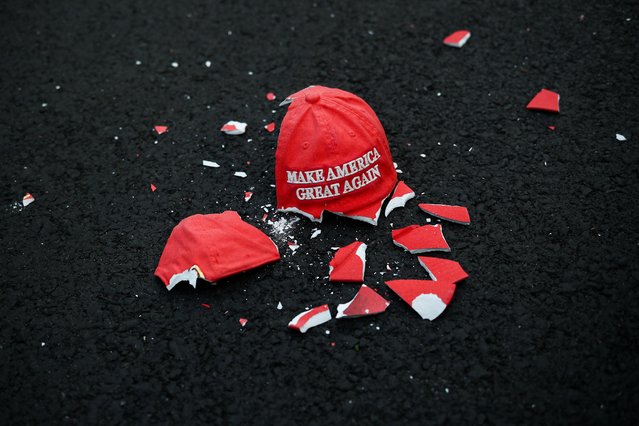 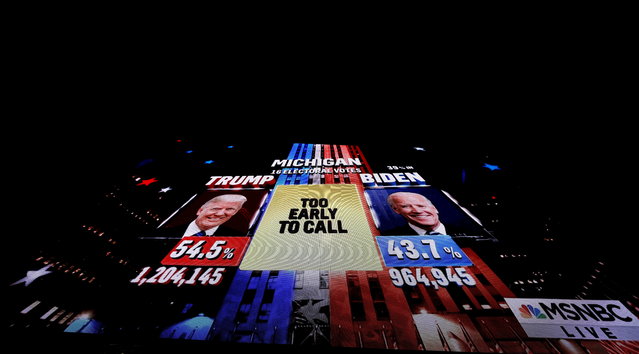 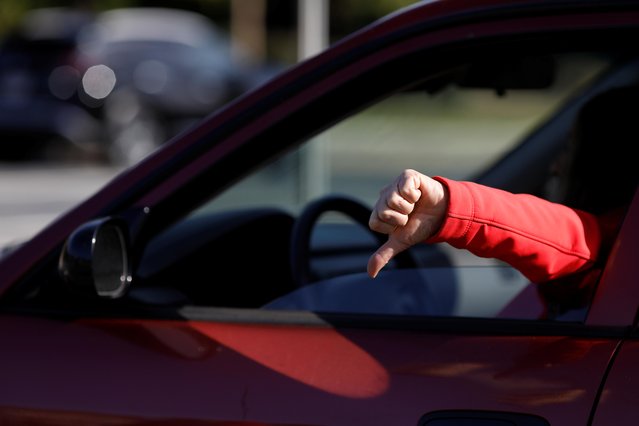 A person gives a thumbs down as she passes by Trump supporters on Election Day in Cobb County in Powder Springs, Georgia, U.S. November 3, 2020. (Photo by Chris Aluka Berry/Reuters) 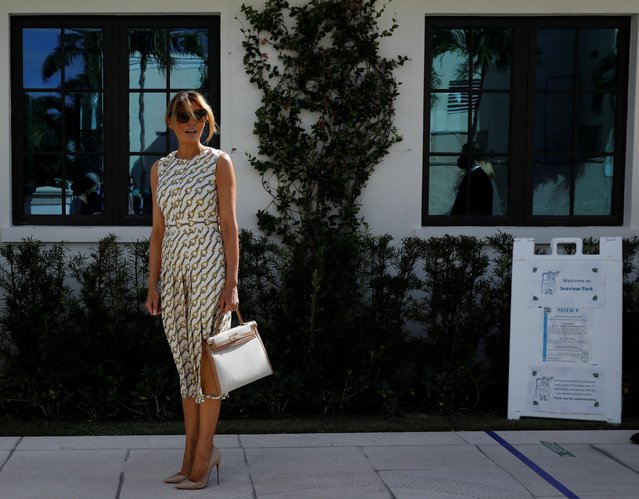