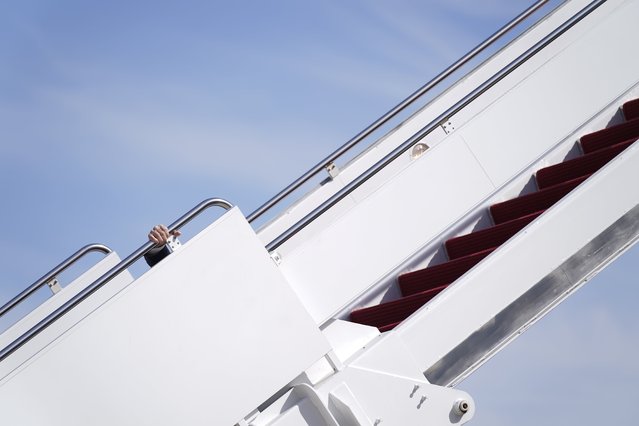 President Joe Biden holds onto the hand rail as he stumbles while boarding Air Force One at Andrews Air Force Base, Md., Friday, March 19, 2021. Biden is en route to Georgia. (Photo by Patrick Semansky/AP Photo) 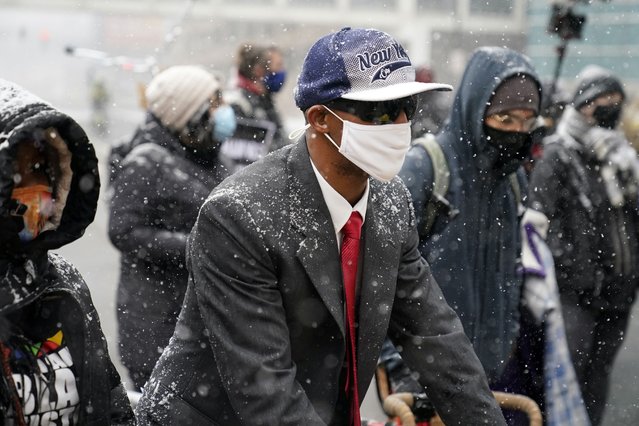 Protesters brave snowfall as they march around the Hennepin County Government Center, Monday, March 15, 2021, in Minneapolis where the second week of jury selection continues in the trial for former Minneapolis police officer Derek Chauvin. Chauvin is charged with murder in the death of George Floyd during an arrest last may in Minneapolis. (Photo by Jim Mone/AP Photo) 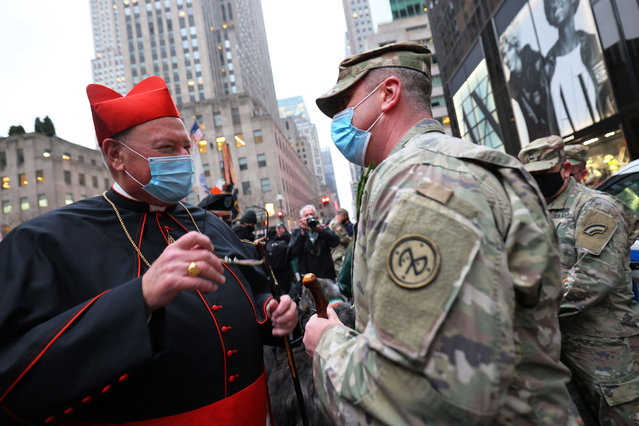 Cardinal Timothy Dolan, Archbishop of New York, greets a member of the 69th Infantry Division, nicknamed the fighting 69th, before the start of a St. Patrick's Day Mass at St. Patrick's Cathedral in Manhattan on March 17, 2021 in New York City. Cardinal Timothy Dolan, Archbishop of New York, held Mass in honor of Saint Patrick, the Patron Saint of the archdiocese. The traditional St. Patrick's Day festivities in NYC were cancelled due to the coronavirus (COVID-19) pandemic. (Photo by Michael M. Santiago/Getty Images) 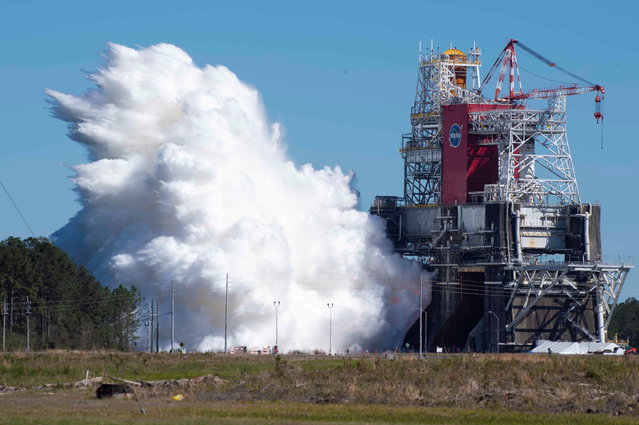 The second hot fire test of the core stage of a Boeing-built rocket for Artemis missions, that aim to return U.S. astronauts to the moon by 2024, is seen at NASA’s Stennis Space Center near Bay St. Louis, Mississippi, U.S. March 18, 2021. (Photo by Robert Markowitz/NASA/Handout via Reuters) 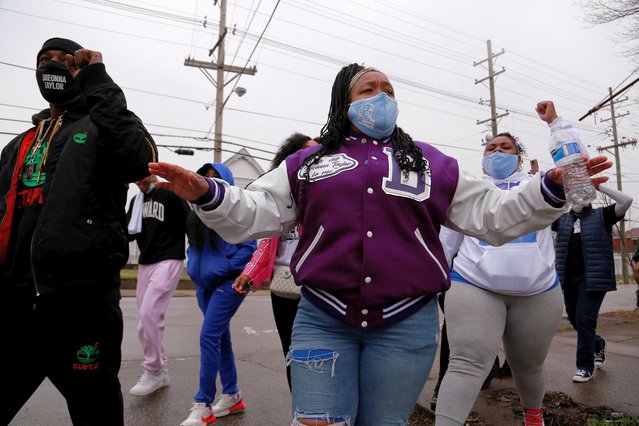 A visitor takes a selfie in front of the jail cells as Alcatraz Island and the famous former prison reopens to the public for indoor tours, after being forced to shut down twice over the past year due to the coronavirus pandemic, in San Francisco Bay, California, March 15, 2021. (Photo by Brittany Hosea-Small/Reuters) 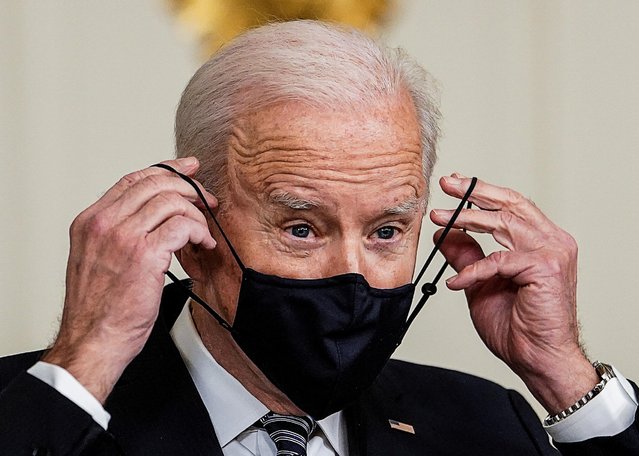 U.S. President Joe Biden replaces his face mask after delivering remarks on the implementation of the American Rescue Plan in the State Dining Room at the White House in Washington, U.S., March 15, 2021. (Photo by Kevin Lamarque/Reuters) 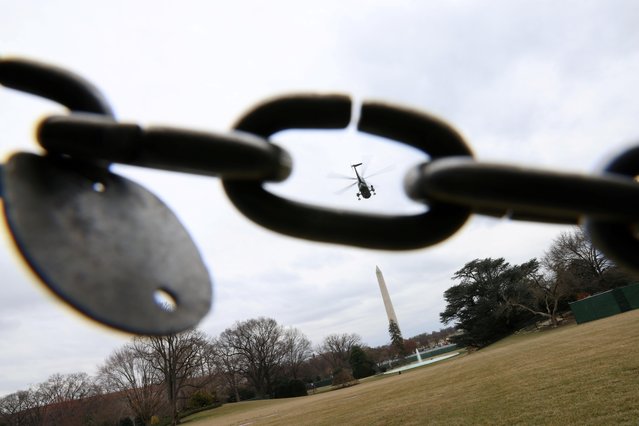 U.S. President Joe Biden rides aboard Marine One as he departs for travel to Pennsylvania to promote the “American Rescue Plan Act” from the South Lawn at the White House in Washington, U.S., March 16, 2021. (Photo by Tom Brenner/Reuters) 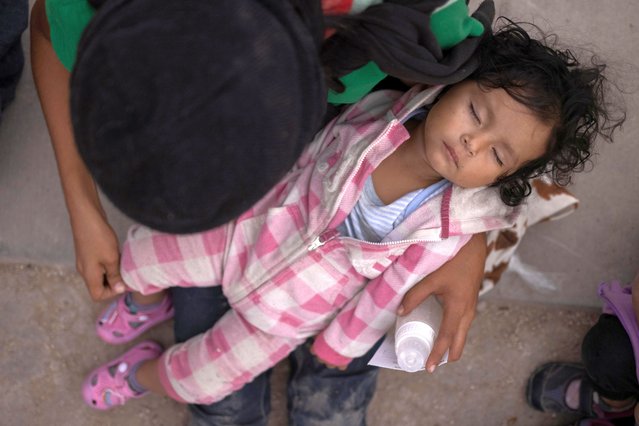 Cherie, a one-year-old old asylum-seeking migrant girl from Honduras, sleeps in her mother’s arm after they crossed the Rio Grande river into the United States from Mexico on a raft in Penitas, Texas, U.S., March 16, 2021. (Photo by Adrees Latif/Reuters) 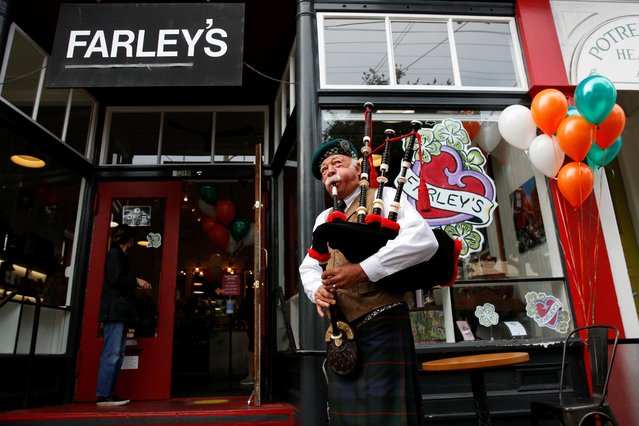 Lynne Miller plays the bagpipes for guests outside as Farley's Cafe marks its 32nd anniversary with bagpipes, Irish stew, and live music on St. Patrick's Day in San Francisco, California, March 17, 2021. Miller has played the bagpipes at every anniversary event of Farley's since they opened, except in 2020, when the event was cancelled due to the coronavirus pandemic. (Photo by Brittany Hosea-Small/Reuters) 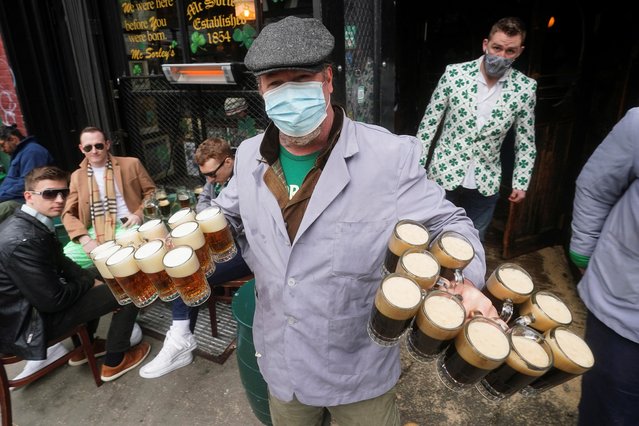 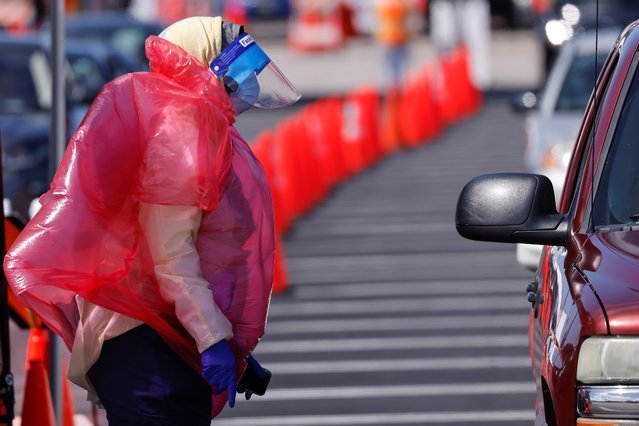 A worker's protective gear is blown by strong winds at a large vaccination site during the outbreak of the coronavirus disease (COVID-19) in Inglewood, California, U.S., March 15, 2021. (Photo by Mike Blake/Reuters) 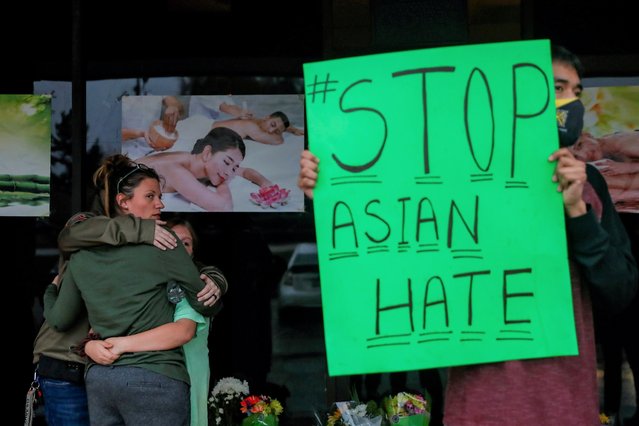 People grieve while Jesus Estrella, 21 holds a sign outside Young's Asian Massage following the deadly shootings in Acworth, Georgia, March 17, 2021. The 21-year-old suspect, Robert Aaron Long, has been charged with four counts of murder according to media reports. (Photo by Shannon Stapleton/Reuters) 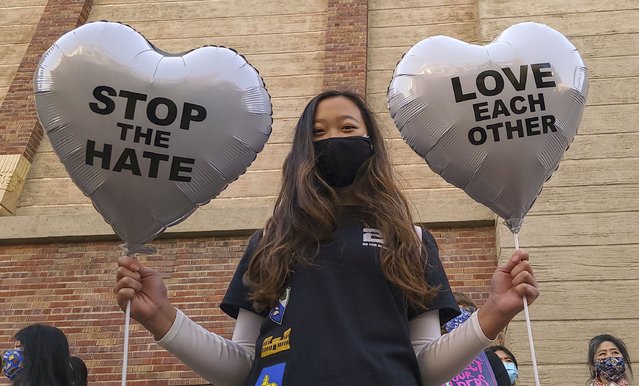 In this March 13, 2021, file photo, Chinese-Japanese American student Kara Chu, 18, holds a pair of heart balloons decorated by herself for the rally “Love Our Communities: Build Collective Power” to raise awareness of anti-Asian violence outside the Japanese American National Museum in Little Tokyo in Los Angeles. The shootings at three Georgia massage parlors and spas Tuesday, March 16, that left eight people dead, six of them women of Asian descent, come on the heels of a recent wave of attacks against Asian Americans since the coronavirus first entered the United States. (Photo by Damian Dovarganes/AP Photo/File) 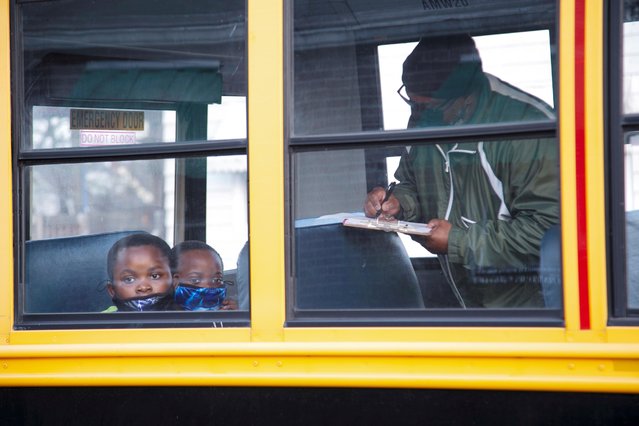 The bus driver verifies the names of Esther Bahome and Mmema Mkangya on their first day back to school after coronavirus disease (COVID-19) restrictions were adjusted, in Louisville, Kentucky, U.S. March 17, 2021. (Photo by Amira Karaoud/Reuters) 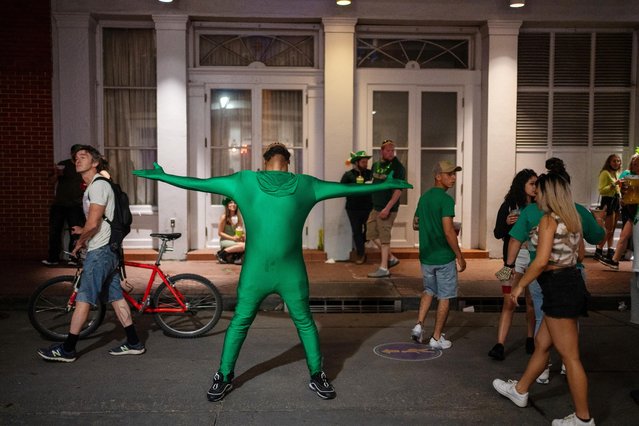 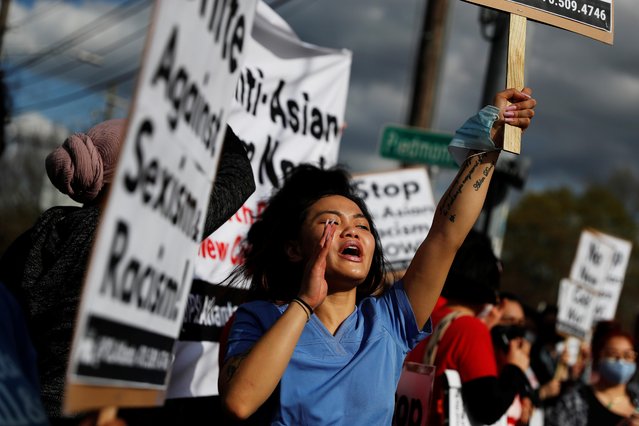 A woman yells during a demonstration following the deadly shootings in Atlanta, Georgia, U.S. March 18, 2021. (Photo by Shannon Stapleton/Reuters) 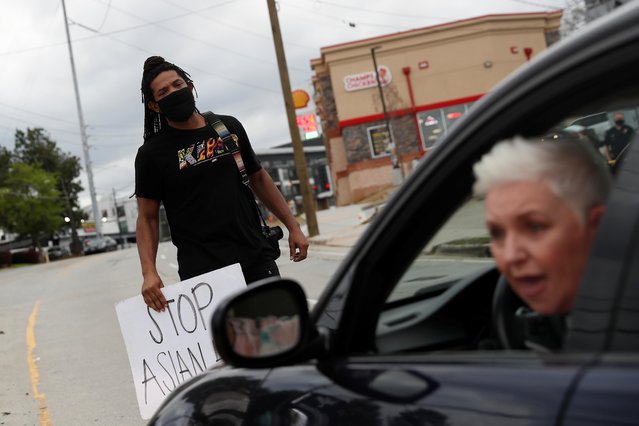 A demonstrator blocks traffic during a rally following the deadly shooting in front of the Gold Spa in Atlanta, Georgia, U.S. March 18, 2021. (Photo by Shannon Stapleton/Reuters) 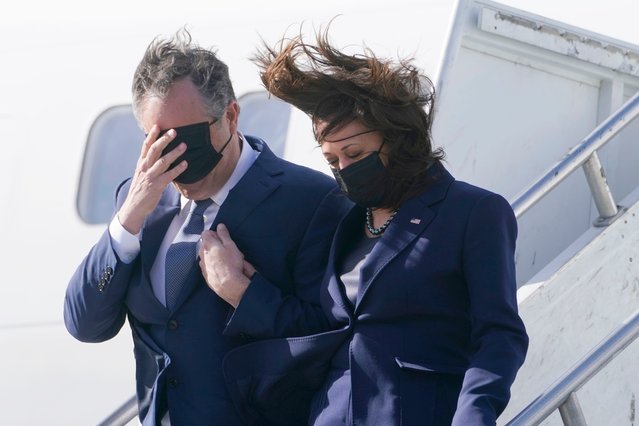 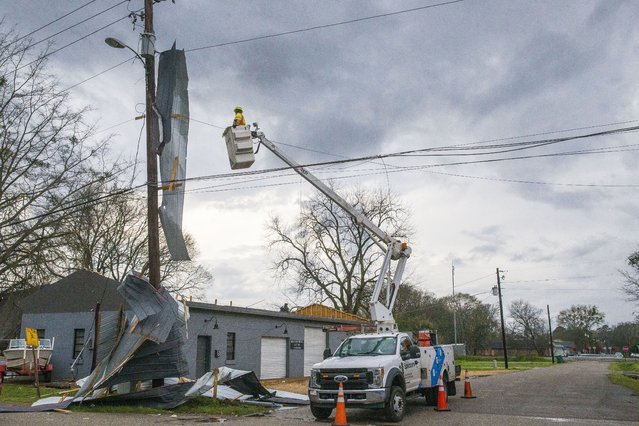 A utility worker looks to repair lines with the roof of Kelley Electric draped on the lines after downtown Moundville was hit by severe weather, Wednesday, March 17, 2021, in Moundville, Ala. Possible tornadoes knocked down trees, toppled power lines and damaged homes in rural Chilton County and the Alabama communities of Burnsville and Moundville, where power was out and trees blocked a main highway. (Photo by Vasha Hunt/AP Photo) 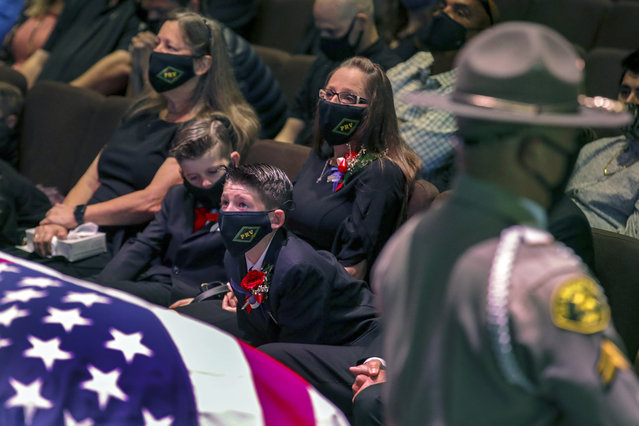 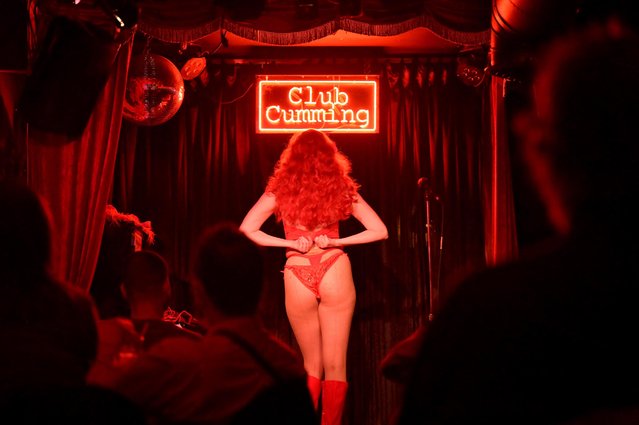