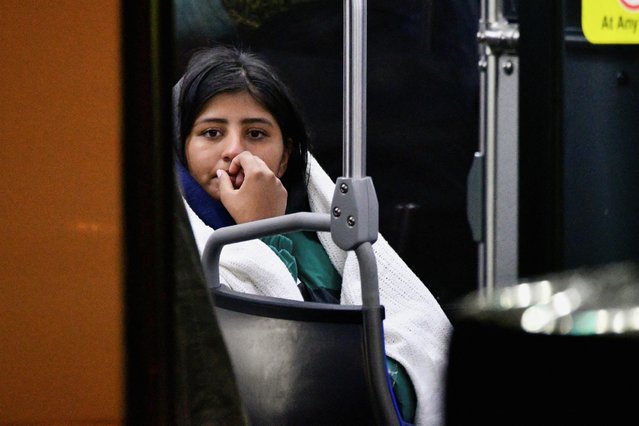 After being transported by bus from the U.S. border in Texas, migrant woman sits in a bus provided by city officials, in Philadelphia, Pennsylvania, U.S., November 16, 2022. (Photo by Bastiaan Slabbers/Reuters) 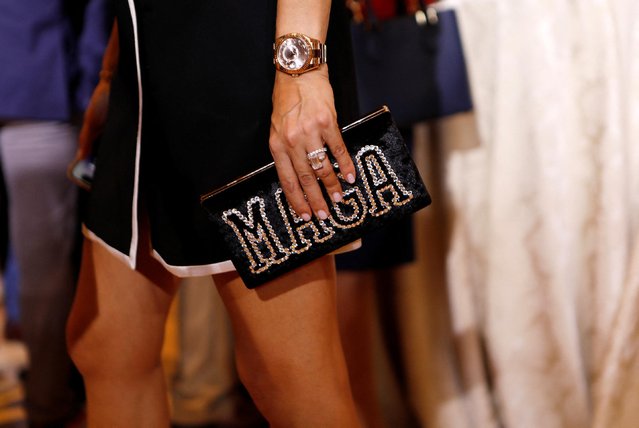 A supporter of former U.S. President Donald Trump waits for him to announce his plans to run for president in the 2024 U.S. presidential election at his Mar-a-Lago estate in Palm Beach, Florida, U.S. November 15, 2022. (Photo by Octavio Jones/Reuters) 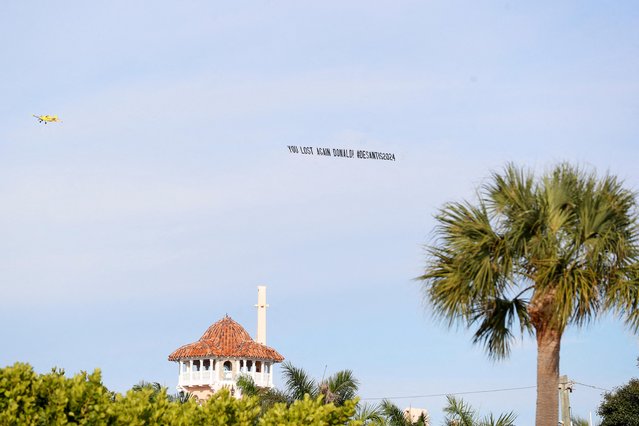 A plane tows a banner over the grounds of his Mar-a-Lago resort before former U.S. President Donald Trump makes an announcement in Palm Beach, Florida, U.S., November 15, 2022. (Photo by Octavio Jones/Reuters) 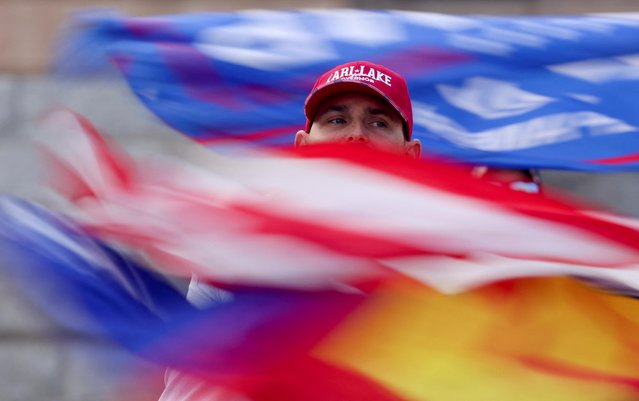 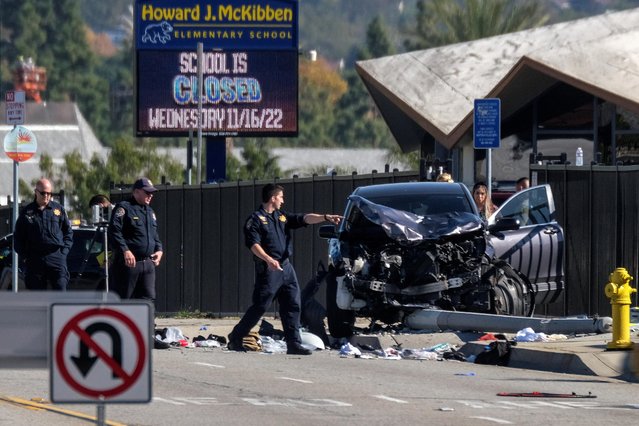 Law enforcement investigate the scene after multiple Los Angeles County Sheriff's Department recruits were injured when a car crashed into them while they were out for a run in Whittier, California, U.S. November 16, 2022. (Photo by Ringo Chiu/Reuters) 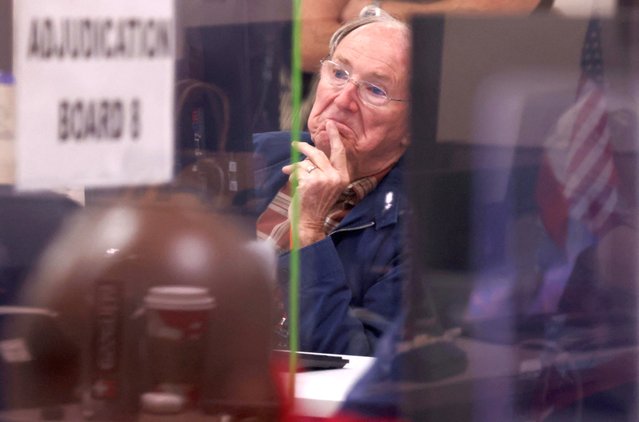 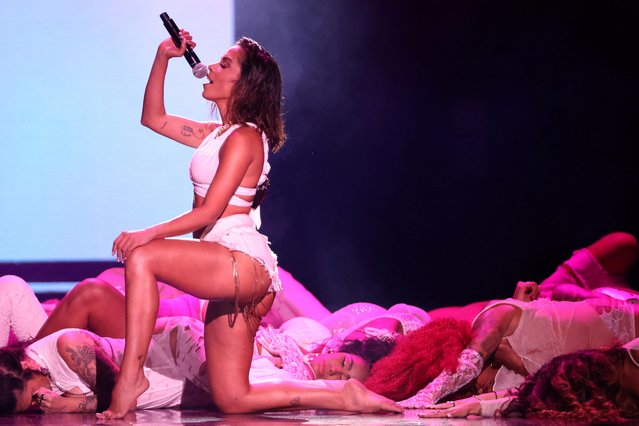 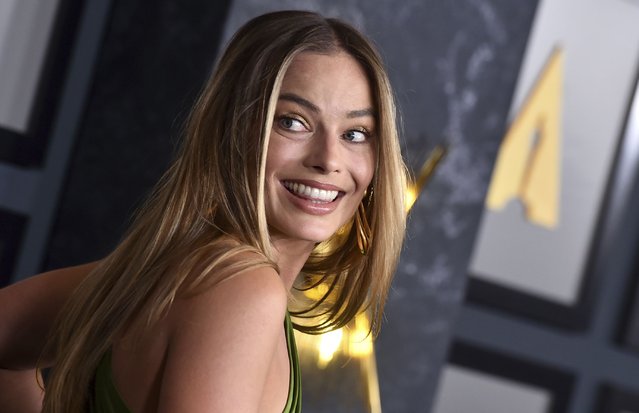 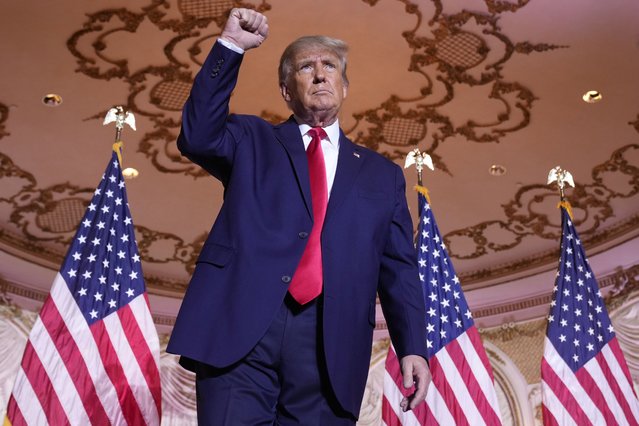 Former President Donald Trump gestures after announcing he is running for president for the third time as he speaks at Mar-a-Lago in Palm Beach, Tuesday, November 15, 2022. (Photo by Andrew Harnik/AP Photo) 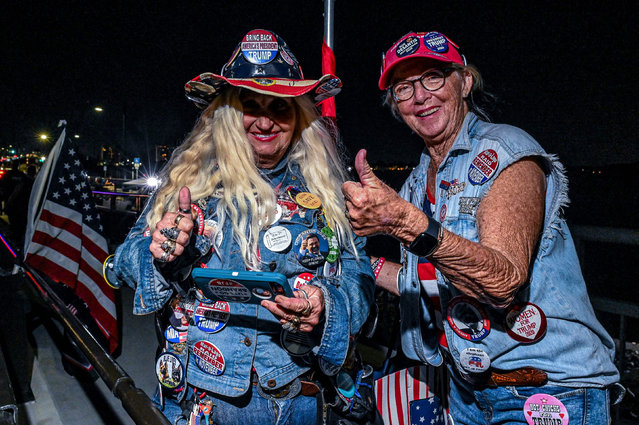 Supporters of former US President Donald Trump celebrate the former president's announcement outside of his Mar-A-Lago residence in West Palm Beach, Florida, on November 15, 2022. Donald Trump pulled the trigger on a third White House run on November 15, setting the stage for a bruising Republican nomination battle after a poor midterm election showing by his hand-picked candidates weakened his grip on the party. Trump filed his official candidacy papers with the US election authority moments before he was due to publicly announce his candidacy. (Photo by Giorgio Viera/AFP Photo) 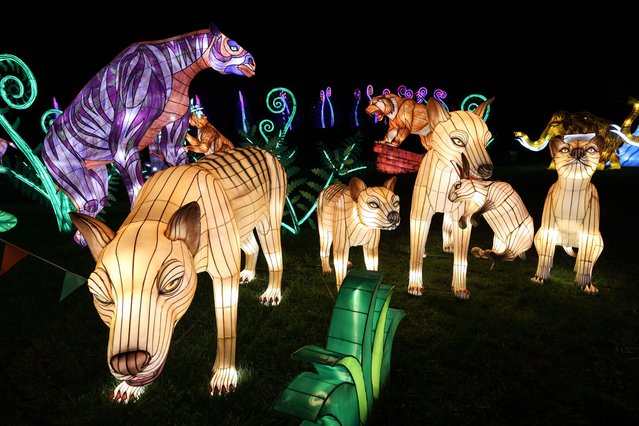 The gondola, lit-up animal lanterns attract thousands to Oakland Zoo in Oakland, California, United States on November 16, 2022. Popular light exhibit “Glowfari” a wildly illuminating lantern festival is back as there are more than 100 animal lanterns throughout the Oakland Zoo. The real animal exhibits are closed during the lantern festival. (Photo by Tayfun Coskun/Anadolu Agency via Getty Images) 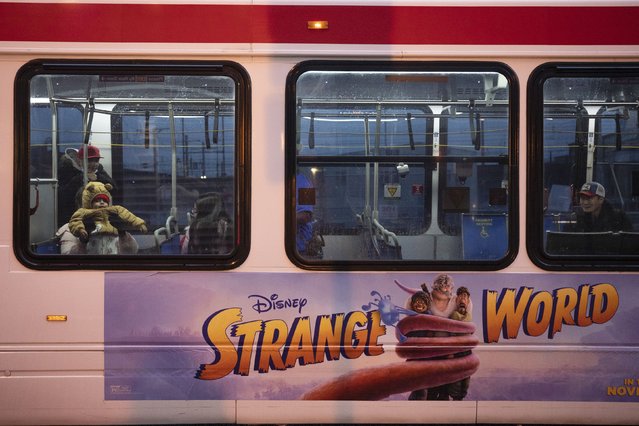 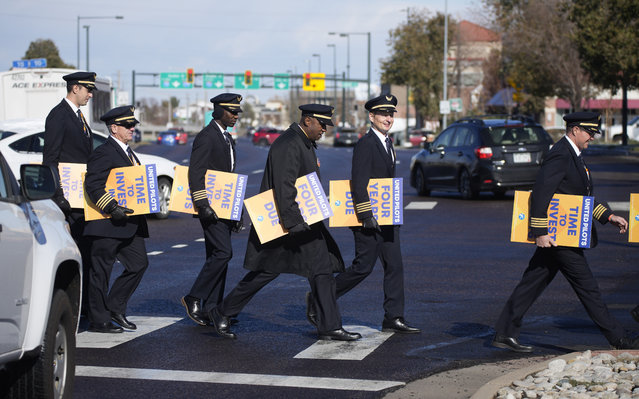 United Airlines pilots as well as other supporters cross Quebec Street to walk an informational picket line to signify the pilot union's commitment to attain an industry-leading contract on Tuesday, November 15, 2022, outside the United Airlines flight training center in east Denver. Organizers said that more than 500 pilots took part in the picket line, which was staged due to management delays during contract negotiations. (Photo by David Zalubowski/AP Photo) 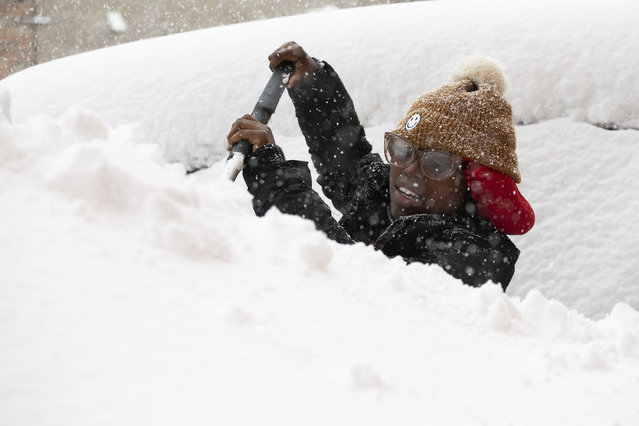 Zaria Black, 24, from Buffalo, clears off her car as snow falls Friday, November 18, 2022, in Buffalo, N.Y. A dangerous lake-effect snowstorm paralyzed parts of western and northern New York, with nearly 2 feet of snow already on the ground in some places and possibly much more on the way. (Photo by Joshua Bessex/AP Photo) 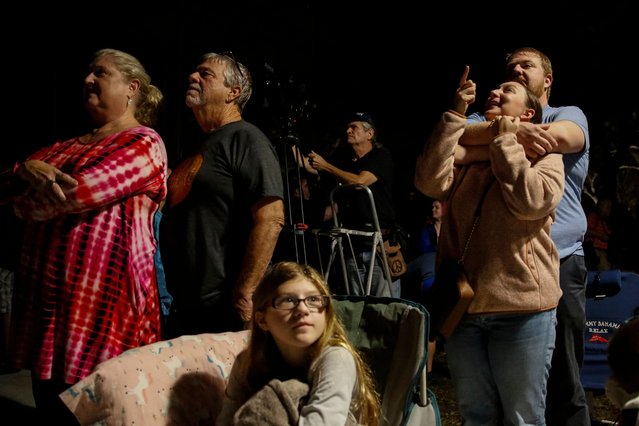 People at Veterans Memorial park watch as the Artemis I unmanned lunar rocket lifts off from launch pad 39B at NASA's Kennedy Space Center, in Titusville, Florida, on November 16, 2022. (Photo by Marco Bello/AFP Photo) 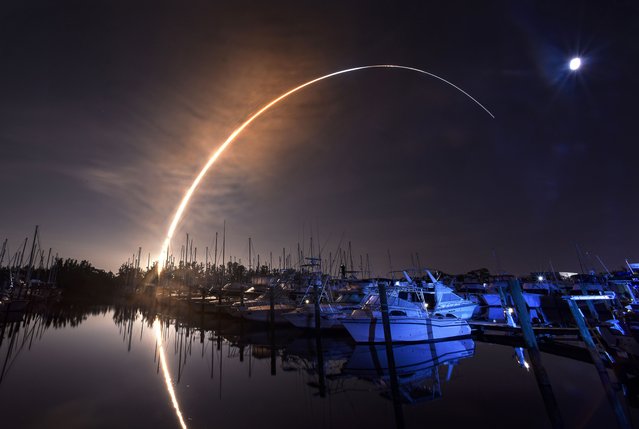 NASA's new moon rocket lifts off from the Kennedy Space Center in Cape Canaveral, Wednesday morning, November 16, 2022, as seen from Harbor town Marina on Merritt Island, Fla. The moon is visible in the sky. (Photo by Malcolm Denemark/Florida Today via AP Photo) 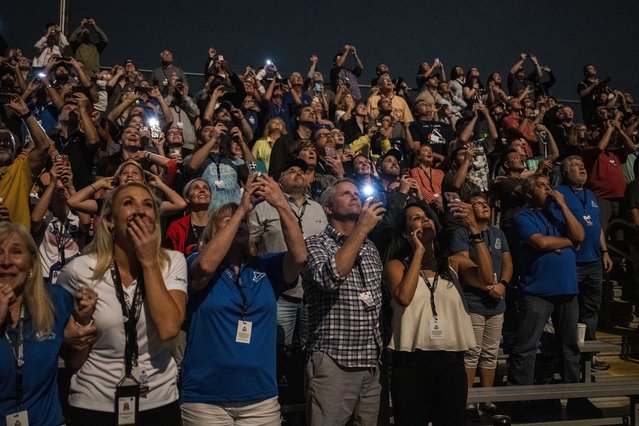 In this photo provided by NASA, guests at the Banana Creek watch the launch of NASA's Space Launch System rocket carrying the Orion spacecraft on the Artemis I flight test, early Wednesday, November 16, 2022, at NASA's Kennedy Space Center in Fla. (Photo by Keegan Barber/NASA via AP Photo) 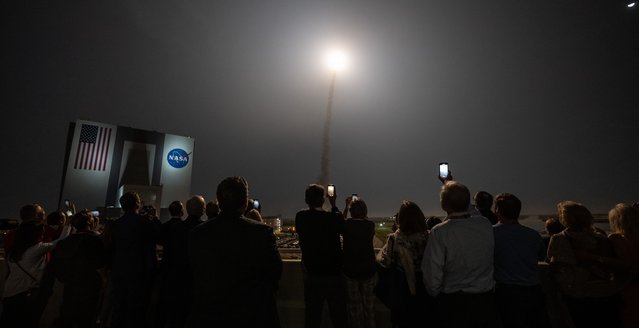 In this handout photo provided by NASA on November 16, 2022, people watch as the Artemis I unmanned lunar rocket lifts off from launch pad 39B at NASA's Kennedy Space Center in Cape Canaveral, Florida. NASA's Artemis 1 mission is a 25-and-a-half day voyage beyond the far side of the Moon and back. The meticulously choreographed uncrewed flight should yield spectacular images as well as valuable scientific data. (Photo by Bill Ingalls/NASA via AFP Photo) 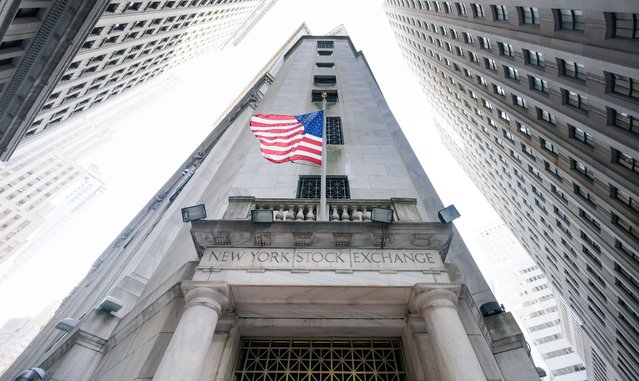 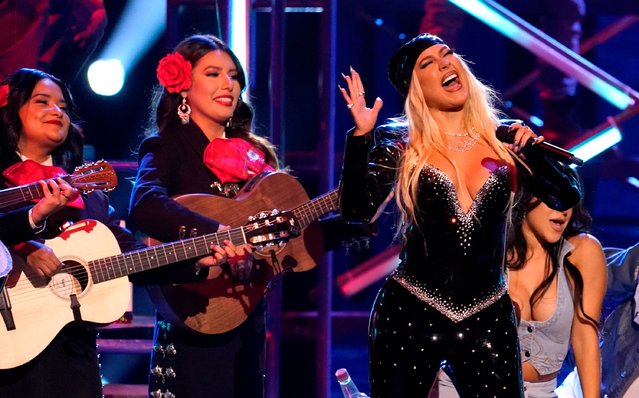