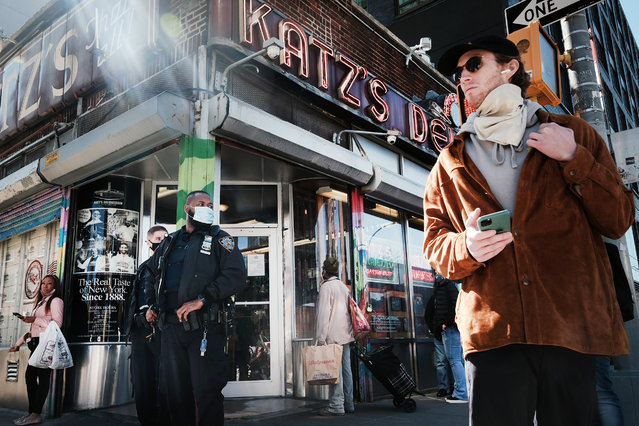 Police gather at the scene of an afternoon shooting along Ludlow Street in a trendy section of lower Manhattan on March 30, 2021 in New York City. A man was shot and seriously injured in the shooting just steps away from upscale boutiques and hotels. New York City has seen a 40-percent rise in shootings over the same period of the previous year. (Photo by Spencer Platt/Getty Images) 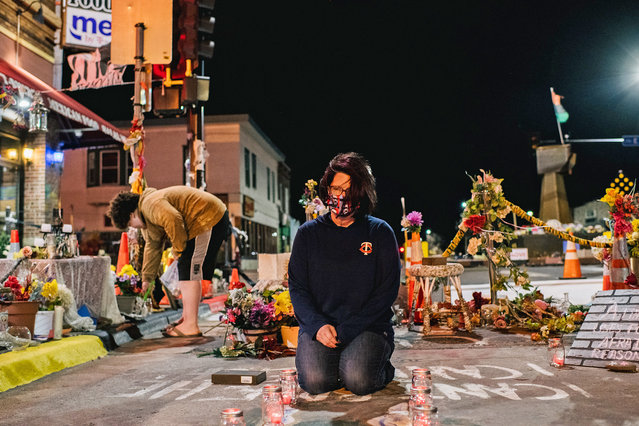 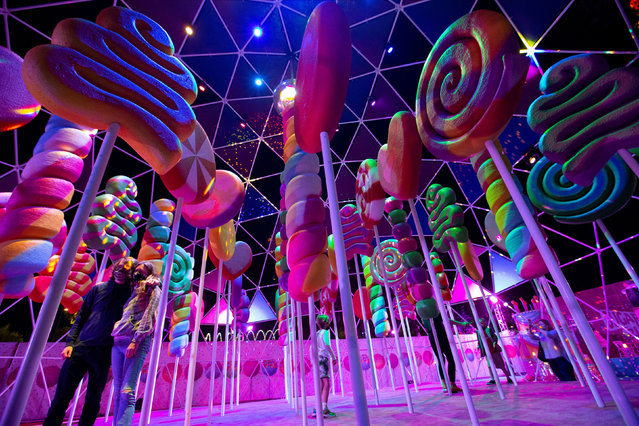 Guests pose for photos by an installation at the “Sugar Rush” experience, a candy-based theme park, in Woodland Hills, California, U.S., April 1, 2021. (Photo by Mario Anzuoni/Reuters) 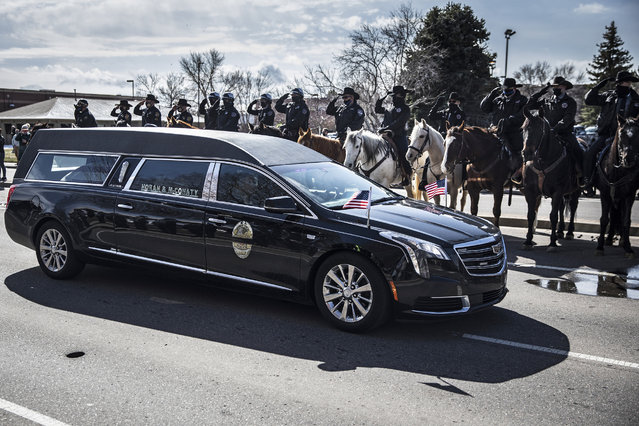 Members of law enforcement on horseback salute as a hearse carrying slain Boulder Police officer Eric Talley makes its way to Flatirons Community Church for a memorial service on March 30, 2021 in Lafayette, Colorado. Officer Talley was one of ten people killed in a shooting at a King Soopers grocery store on March 22 in Boulder, Colorado. (Photo by Chet Strange/Getty Images) 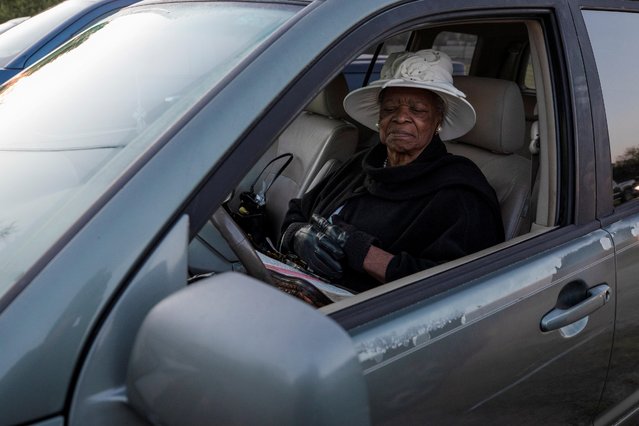 A congregant listens to a prayer during a drive-in Easter service, with social distancing in place despite the lifting of state-wide coronavirus restrictions, at the Jehovah Missionary Baptist Church in Sumter, South Carolina, U.S. April 4, 2021. (Photo by Micah Green/Reuters) 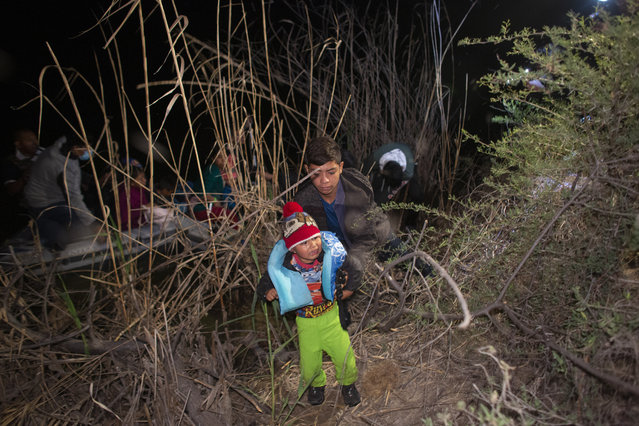 A child weeps as he is unloaded from an inflatable raft after being smuggled into the United States by crossing the Rio Grande River in Roma, Texas, Sunday, March 28, 2021. Roma, a town of 10,000 people with historic buildings and boarded-up storefronts in Texas' Rio Grande Valley, is the latest epicenter of illegal crossings, where growing numbers of families and children are entering the U.S. to seek asylum. (Photo by Dario Lopez-Mills/AP Photo) 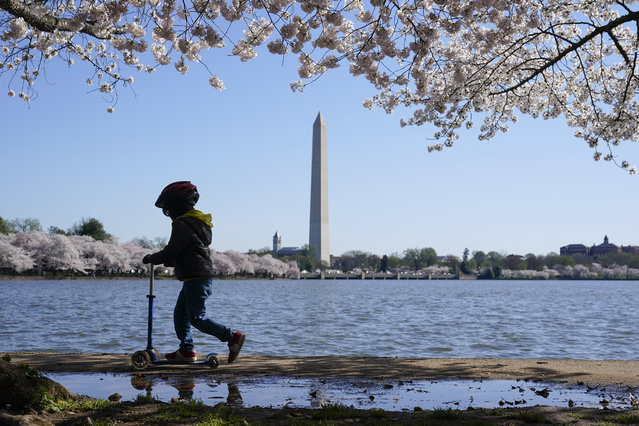 A child rides a scooter under blooming Yoshino cherry trees on the edge of the Tidal Basin, Tuesday, March 30, 2021, in Washington. (Photo by Patrick Semansky/AP Photo) 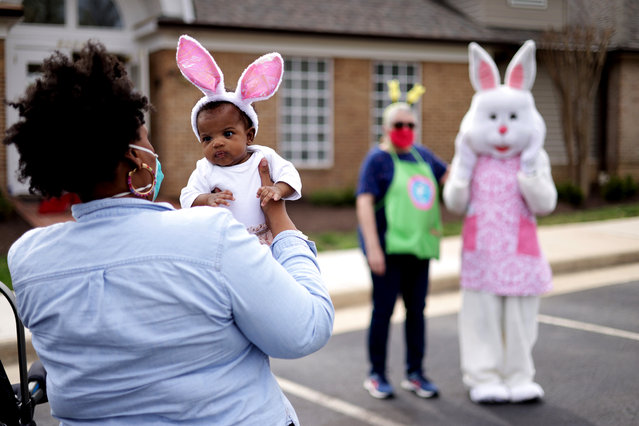 A woman holds her baby as they approach a person dressed as an Easter Bunny during a Bunny Drive-Thru event outside Kingstowne Snyder Fitness Center March 27, 2021 in Alexandria, Virginia. Kingstowne Residential Owners Corporation held the community event instead of the usual annual egg hunt for neighborhood children to celebrate Easter in a safer environment under the COVID-19 pandemic. (Photo by Alex Wong/Getty Images) 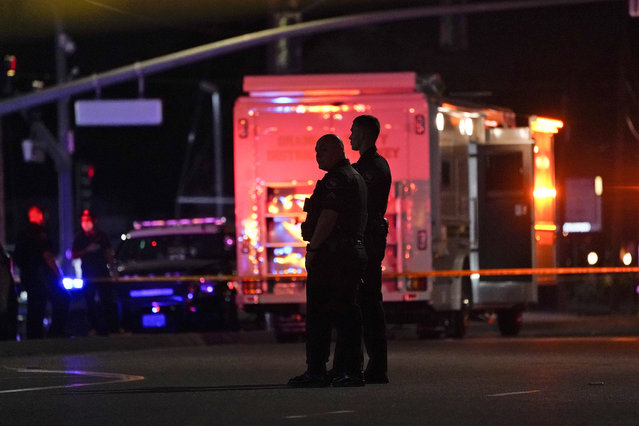 Two police officers stand outside an office building where a shooting occurred in Orange, Calif., Wednesday, March 31, 2021. The shooting killed several people, including a child, and injured another person before police shot the suspect, police said. (Photo by Jae C. Hong/AP Photo) 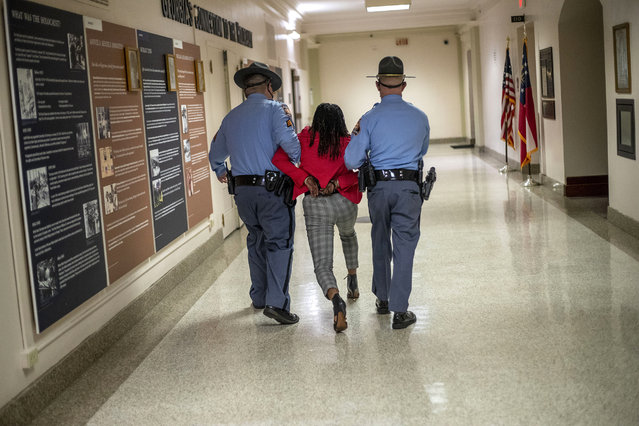 Rep. Park Cannon (D-Atlanta) is escorted out of the Georgia Capitol by Georgia state troopers after being asked to stop knocking on a door that lead to Gov. Brian Kemp's office while Kemp was speaking after signing a sweeping overhaul of state elections behind closed doors in Atlanta, Thursday, March 25, 2021. An attorney for Cannon says it's “law enforcement overreach” to charge the Georgia House member with two felonies. (Photo by Alyssa Pointer/Atlanta Journal-Constitution via AP Photo) 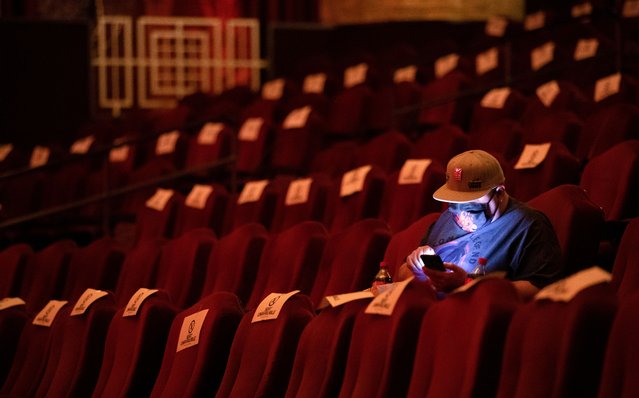 A moviegoer uses his mobile phone while waiting for the movie “Godzilla vs. Kong” on the reopening day of the TCL Chinese theatre during the outbreak of the coronavirus disease (COVID-19), in Los Angeles, California, U.S., March 31, 2021. (Photo by Mario Anzuoni/Reuters) 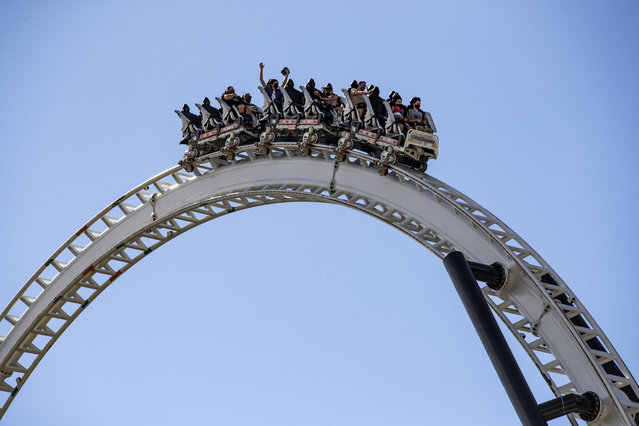 Guests wearing face masks enjoy a ride at the Six Flags Magic Mountain amusement park as it reopens in Valencia, North of Los Angeles, California, USA, 01 April 2021. The park reopened on 01 April at 15 percent capacity which will be increased to 35 percent after one week. (Photo by Etienne Laurent/EPA/EFE) 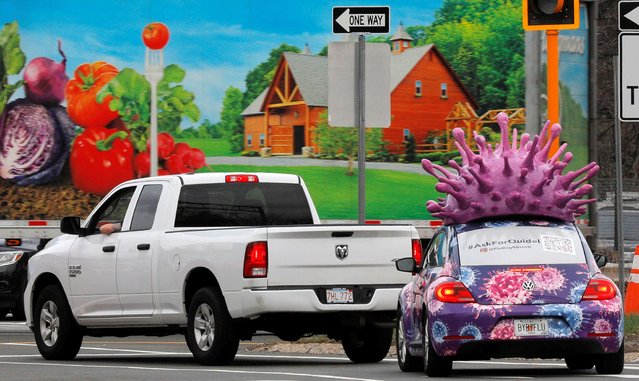 A car, advertising for Quidel Corp., which makes test kits for both the flu and the coronavirus disease (COVID-19), waits at a traffic light with a large model of the influenza virus on its roof, in Medford, Massachusetts, U.S., March 31, 2021. (Photo by Brian Snyder/Reuters) 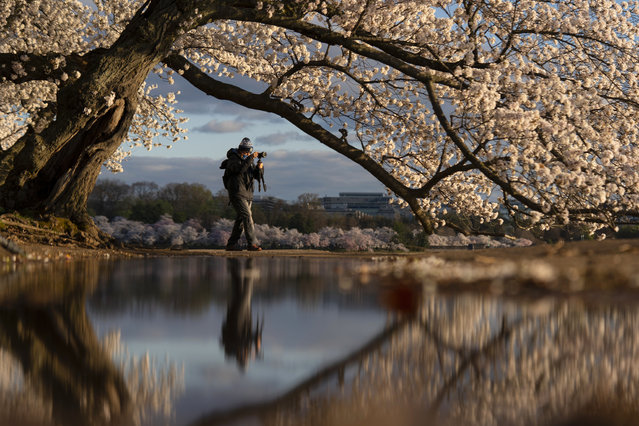 A photographer is reflected in a puddle under blooming Yoshino cherry trees on the edge of the Tidal Basin, Monday, March 29, 2021, in Washington. The 2021 National Cherry Blossom Festival celebrates the original gift of 3,000 cherry trees from the city of Tokyo to the people of Washington in 1912. (Photo by Carolyn Kaster/AP Photo) 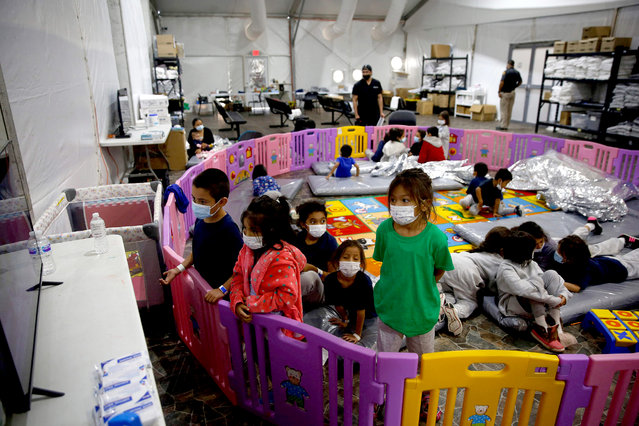 Young unaccompanied migrants, ages 3-9 watch TV inside a playpen at the Donna Department of Homeland Security holding facility, the main detention center for unaccompanied children in the Rio Grande Valley in Donna, Texas, March 30, 2021. The youngest of the unaccompanied minors are kept separate from the rest of the detainees. (Photo by Dario Lopez-Mills/Pool via AFP Photo) 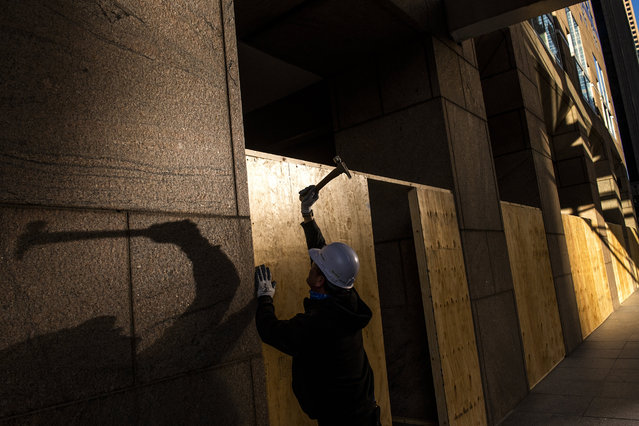 Crews board up a building across the street from the Hennepin County Government Center on April 1, 2021 in Minneapolis, Minnesota. The Derek Chauvin murder trial continues today. The former Minneapolis Police officer is accused of multiple counts of murder in the death of George Floyd last May. (Photo by Stephen Maturen/Getty Images) 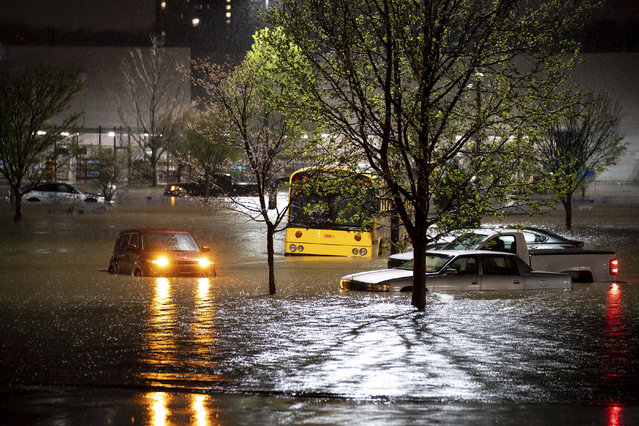 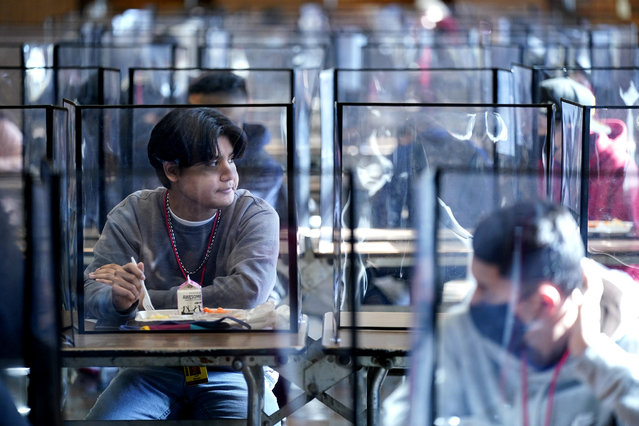 Students sit separated by plastic dividers during lunch at Wyandotte County High School in Kansas City, Kan. on the first day of in-person learning Wednesday, March 31, 2021. The district was one of the last in the state to return to the classroom after going virtual due to the COVID-19 pandemic. (Photo by Charlie Riedel/AP Photo) 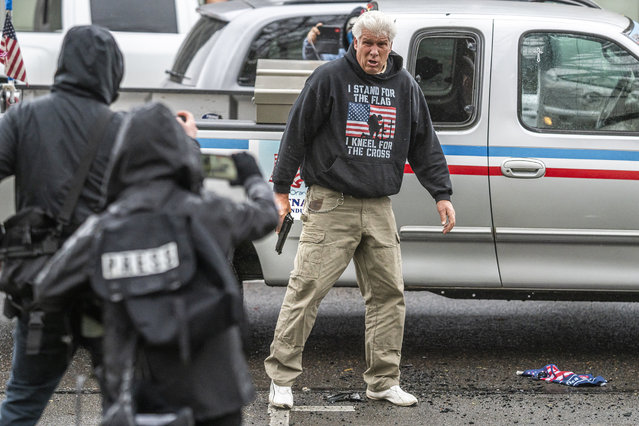 A driver pulls a handgun on protesters after they broke his trucks lights on March 28, 2021 in Salem, Oregon. The protesters clashed with occupants of vehicles that had participated in an American flag-waving car caravan, despite law enforcements efforts to to keep the groups separate. (Photo by Nathan Howard/Getty Images)
Edit Del
08 Apr 2021 10:50:00, post received 0 comments
Publication archive:
←   →
Popular tags:
All tags
Last searches: