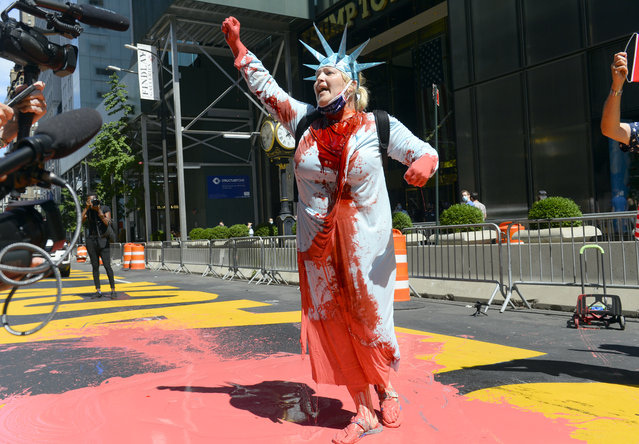 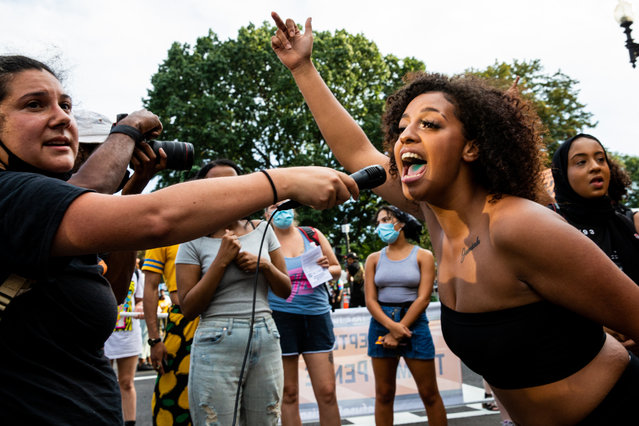 A protester leads a chant during a protest at Black Lives Matter Plaza on August 27, 2020 in Washington, DC. Protesters gathered on the final night of the Republican National Convention in which both President Donald Trump Vice President Mike Pence accepted the Republican nomination as candidates for a second term as U.S. President. (Photo by Natasha Moustache/Getty Images) 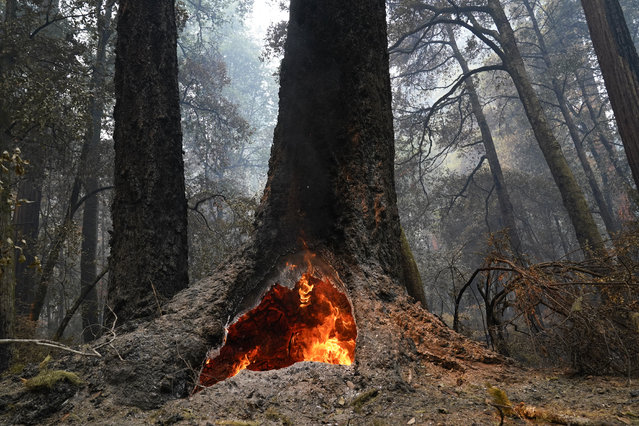 Fire burns in the hollow of an old-growth redwood tree in Big Basin Redwoods State Park, Calif., Monday, August 24, 2020. The CZU Lightning Complex wildfire tore through the park but most of the redwoods, some as old as 2,000 years, were still standing. (Photo by Marcio Jose Sanchez/AP Photo) 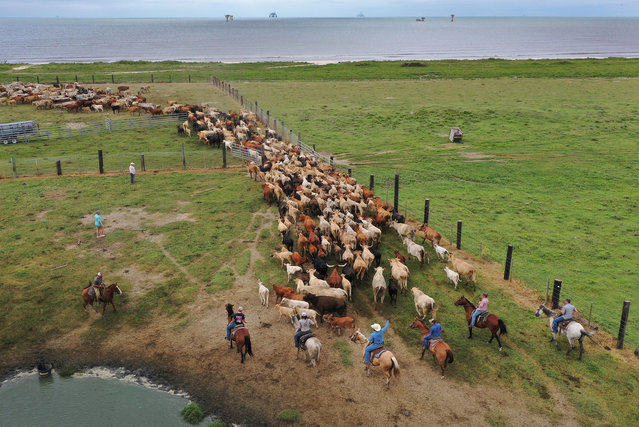 In this aerial view from a drone, cowboys round up cattle on a pasture next to the Gulf of Mexico to take them to safe ground before the possible arrival of Hurricane Laura on August 25, 2020 in Cameron, Louisiana. Ranch owner Roman Tatriot said he was rounding up about 600 cattle and with the help of neighbors expects to get them out before the hurricane arrives. Hurricane Laura is expected to hit somewhere along the Gulf Coast late Wednesday and early Thursday. (Photo by Joe Raedle/Getty Images) 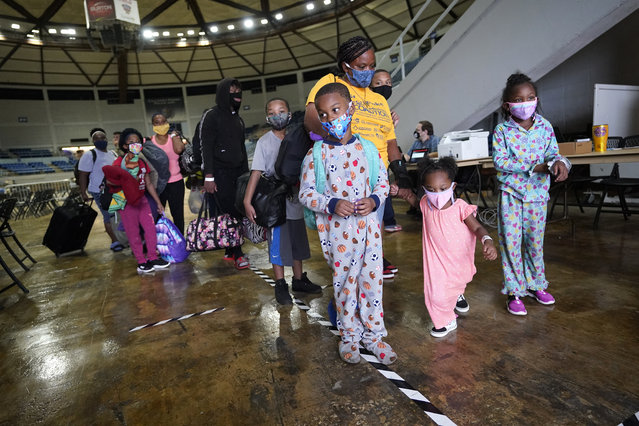 Victoria Nelson with her children Autum Nelson, 2, Shawn Nelson, 7, and Asia Nelson, 6, line up to board a bus to evacuate Lake Charles, La., Wednesday, August 26, 2020, ahead of Hurricane Laura. (Photo by Gerald Herbert/AP Photo) 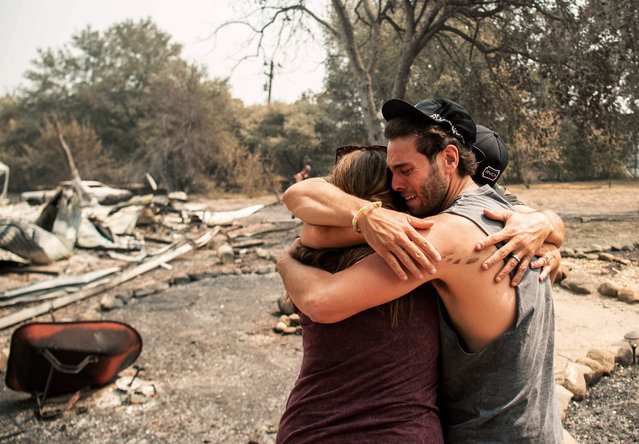 Resident Austin Giannuzzi cries while embracing family members at the burned remains of their home during the LNU Lightning Complex fire in Vacaville, California on August 23, 2020. Firefighters battled some of California's largest-ever fires that have forced tens of thousands from their homes and burned one million acres, with further lightning strikes and gusty winds forecast in the days ahead. (Photo by Josh Edelson/AFP Photo) 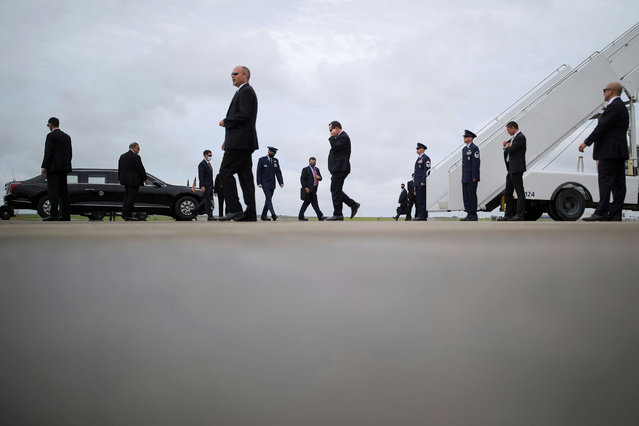 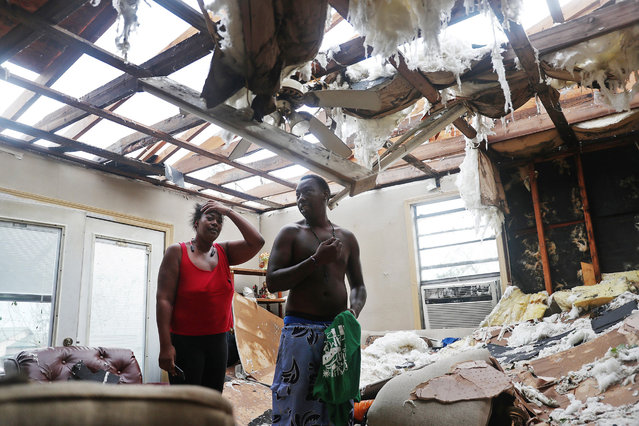 Latasha Myles and Howard Anderson stand in their living room where they were sitting when the roof blew off around 2:30am as Hurricane Laura passed through the area on August 27, 2020 in Lake Charles, Louisiana . The hurricane hit with powerful winds causing extensive damage to the city. (Photo by Joe Raedle/Getty Images) 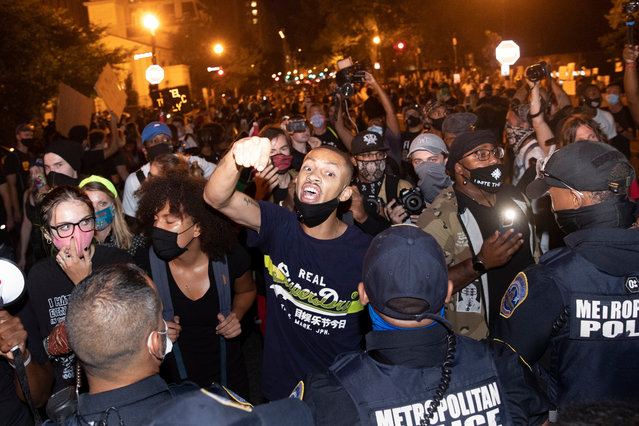 Black Lives Matter supporters shout at police near Black Lives Matter Plaza during the final night of the Republican National Convention (RNC) in Washington, DC, USA, 27 August 2020. Large protest are expected as the RNC culminates tonight with US President Donald J. Trump delivering a speech on the South Lawn of the White House with fireworks to follow. (Photo by Michael Reynolds/EPA/EFE) 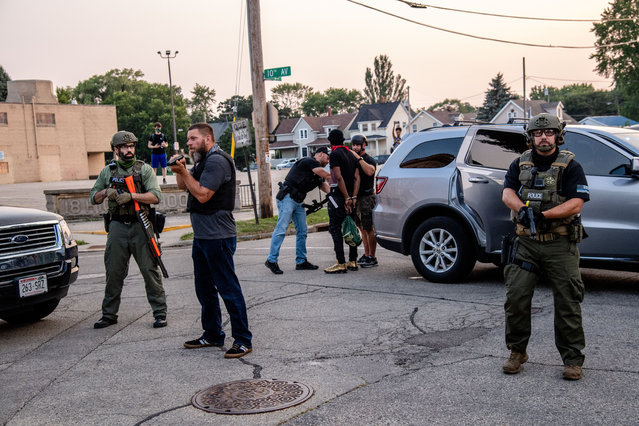 A protester is detained by federal agents and police officers as protesters gather outside of Kenosha County Court House on August 26, 2020 in Kenosha, WI. Protesters have gathered for the fourth day following the shooting of Jacob Blake, 29, on August 23. Video of the incident appears to show Blake shot multiple times in the back by Wisconsin police officers while attempting to enter the drivers side of a vehicle. (Photo by Amy Harris/Rex Features/Shutterstock) 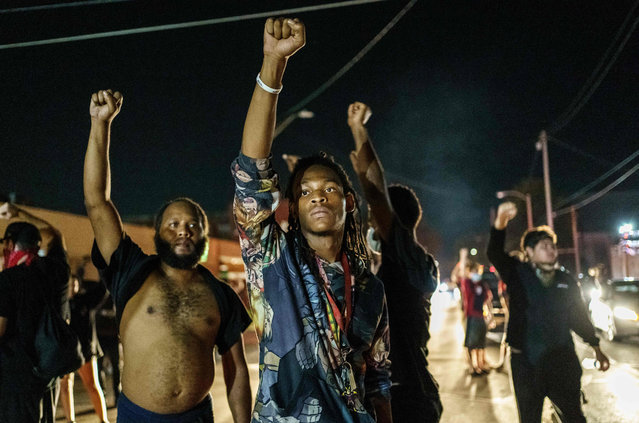 Protesters raise their fists during a demonstration against the shooting of Jacob Blake in Kenosha, Wisconsin on August 26, 2020. Two people were shot dead and a third injured on the night of August 25 in the US city of Kenosha as anti-police protesters clashed with armed vigilante groups during a third night of demonstrations over the police shooting of a black man. (Photo by Kerem Yucel/AFP Photo) 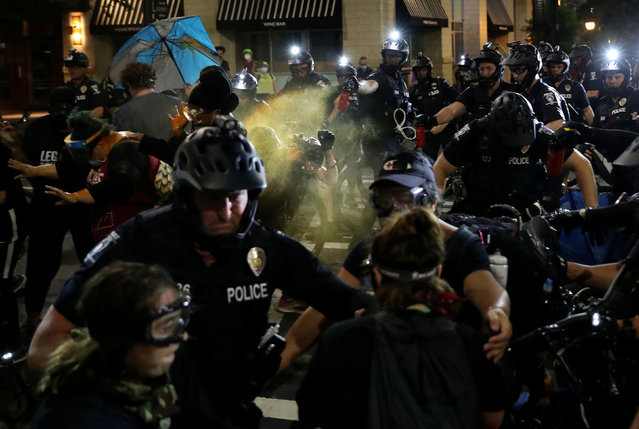 Policemen use pepper spray on demonstrators during a scuffle at a protest near the Charlotte Convention Center, the site of the Republican National Convention, in Charlotte, North Carolina, U.S. August 23, 2020. (Photo by Leah Millis/Reuters) 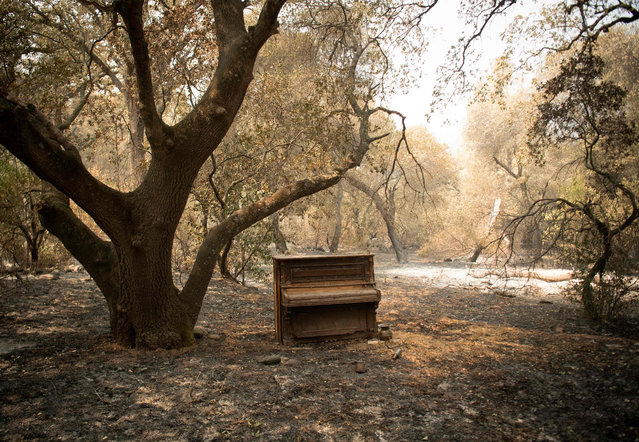 A piano remains untouched near the charred remains of a residence during the LNU Lightning Complex fire in Vacaville, California on August 23, 2020. Firefighters battled some of California's largest-ever fires that have forced tens of thousands from their homes and burned one million acres, with further lightning strikes and gusty winds forecast in the days ahead. (Photo by Josh Edelson/AFP Photo) 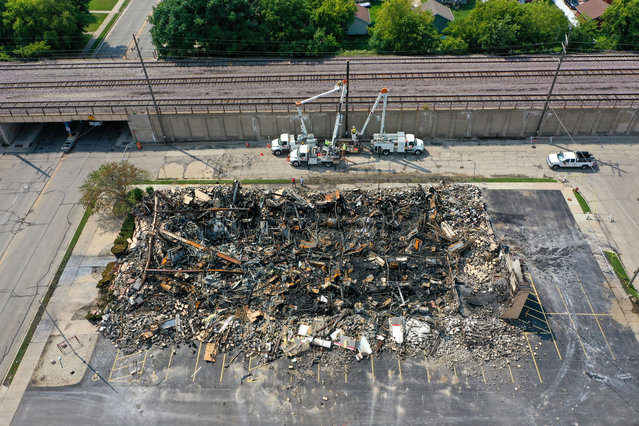 A view of a damaged area after a group of protestors who lit dealership last night over the shooting of a black man Jacob Blake by police officer in Kenosha, Wisconsin, United States on August 25, 2020. The Wisconsin National Guard has been deployed to Kenosha after the man was shot several times at close range in the back during an encounter with a police officer, which was caught on video. (Photo by Tayfun Coskun/Anadolu Agency via Getty Images) 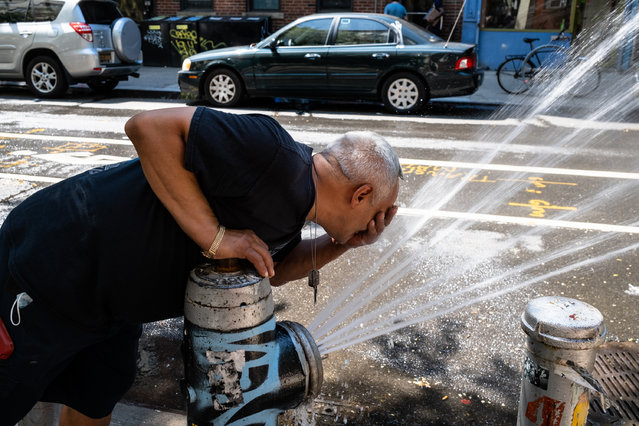 A man washes his face in an open fire hydrant on a hot day in the East Village, New York, NY. on August 24, 2020. (Photo by Stephen Yang/The New York Post) 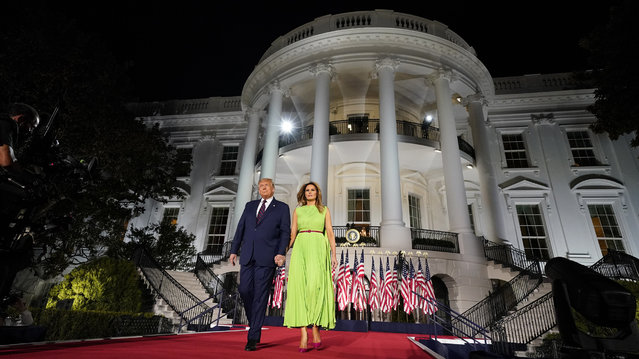 President Donald Trump and first lady Melania Trump arrive for his acceptance speech to the Republican National Committee Convention on the South Lawn of the White House, Thursday, August 27, 2020, in Washington. (Photo by Evan Vucci/AP Photo) 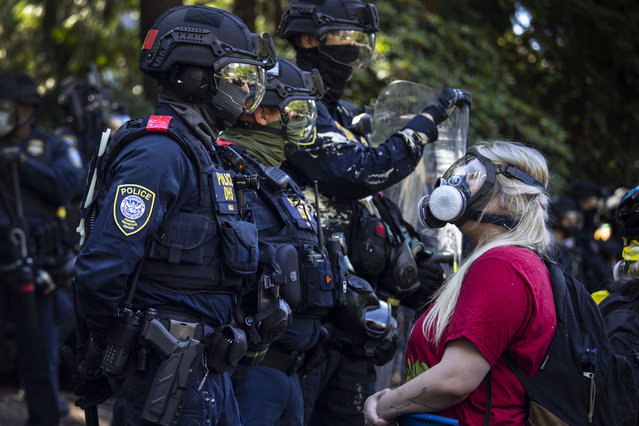 A protester, wearing a gas mask, confronts members of the Portland police during clashes between the Alt-Right Proud Boy group and Black Lives Matter protesters in Portland, Oregon on August 22, 2020. For the second Saturday in a row, right wing groups gathered in downtown Portland, sparking counter protests and violence. (Photo by Paula Bronstein/Getty Images) 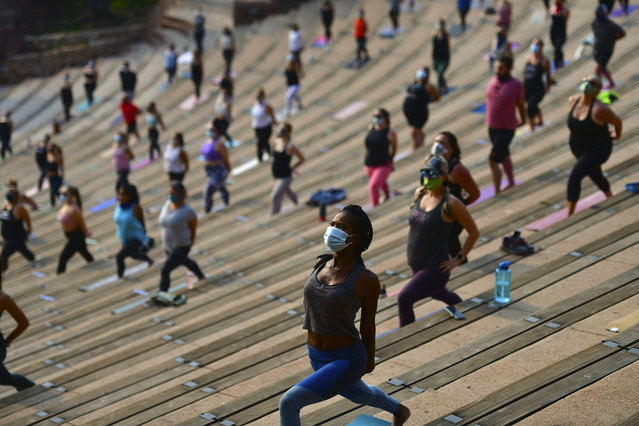 People participate in a morning yoga session on August 22, 2020 at the Red Rocks Amphiteatre in Morrison, Colorado. The famed concert locale features physically distanced summer events during the coronavirus pandemic, including weekend yoga and a drive-in movie theater. Normally, there are 2,500 participants but due to coronavirus restrictions, the event has been capped at 175. (Photo by Mark Makela/Getty Images) 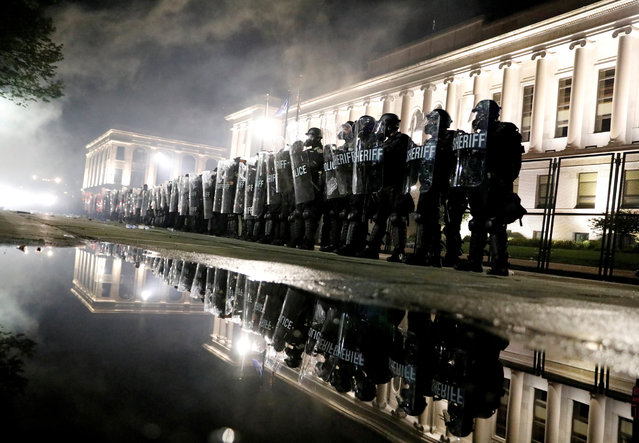 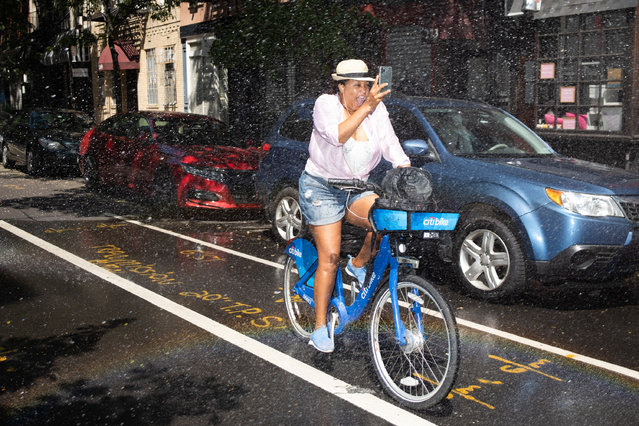 A bicyclist rides past an open fire hydrant in the East Village, New York on August 24, 2020. (Photo by Stephen Yang/The New York Post) 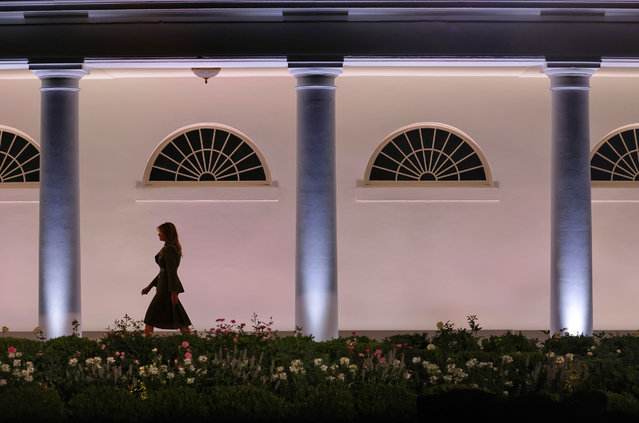 U.S. first lady Melania Trump walks along the colonnade before addressing the Republican National Convention from the Rose Garden at the White House on August 25, 2020 in Washington, DC. The convention is being held virtually due to the coronavirus pandemic but will include speeches from various locations including Charlotte, North Carolina and Washington, DC. (Photo by Alex Wong/Getty Images) 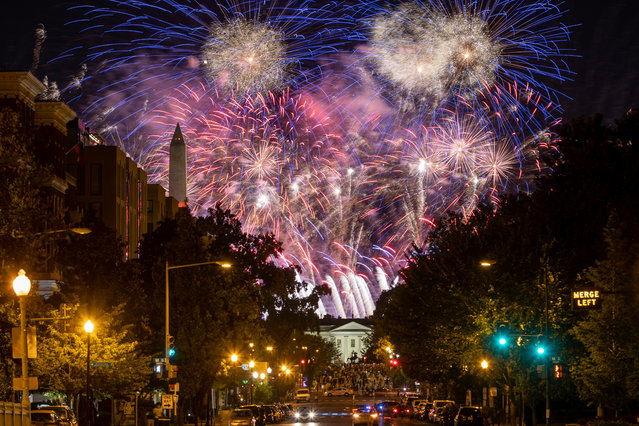 Fireworks are seen above the Washington Monument and the White House at the conclusion of the final day of the Republican National Convention on August 27, 2020 in Washington, DC. President Donald Trump and Vice President Mike Pence accepted the nomination as the Republican candidates for a second term in the White House. (Photo by Tasos Katopodis/Getty Images)
Edit Del
01 Sep 2020 00:03:00, post received 0 comments
Publication archive:
←   →
Popular tags:
All tags
Last searches: