Demonstrators march as they protest outside the Hennepin County Government Center before jury selection at the trial of former Minneapolis Police officer Derek Chauvin on March 8, 2021 in Minneapolis, Minnesota. The judge hearing the murder trial of the police officer charged with killing George Floyd delayed the start of jury selection on March 8, 2021.The process had been scheduled to begin on Monday morning in the trial of former policeman Derek Chauvin, but Judge Peter Cahill delayed it until at least Tuesday. (Photo by Kerem Yucel/AFP Photo) 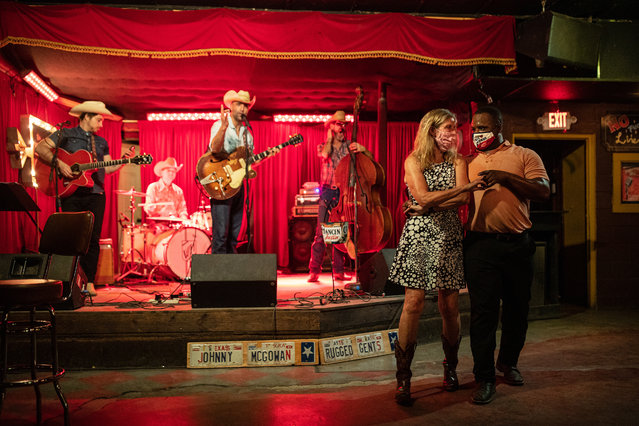 Lloyd Weatherspoon and Hope Wilson dance during a break between songs performed by Johnny McGowan's Rugged Gents at The White Horse on March 10, 2021 in Austin, Texas. The City of Austin said it will continue to maintain its mask rules despite an executive order from Gov. Greg Abbott, which took effect Wednesday, that lifted the statewide mask mandate and allowed businesses to fully reopen. (Photo by Tamir Kalifa/Getty Images) 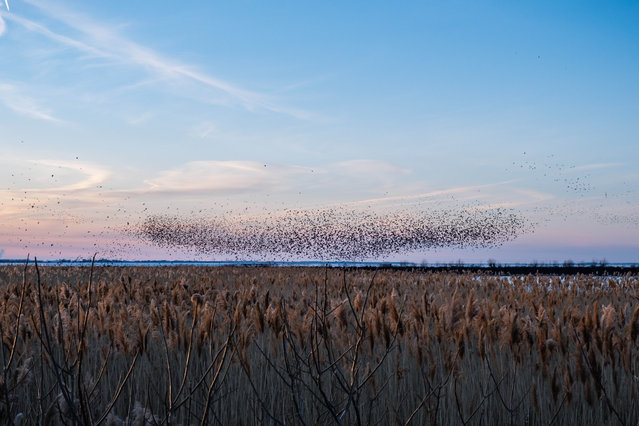 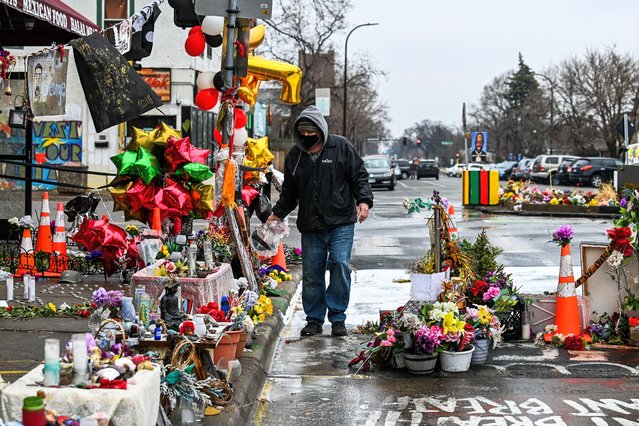 A man removes dead flowers from the makeshift memorial of George Floyd before the third day of jury selection begins in the trial of former Minneapolis Police officer Derek Chauvin who is accused of killing Floyd, in Minneapolis, Minnesota on March 10, 2021. The first jurors were selected on March 9, 2021 in the high-profile trial of the white police officer accused of killing George Floyd, an African-American man whose death laid bare racial wounds in the United States and sparked "Black Lives Matter" protests across the globe. Former Minneapolis Police Department officer Derek Chauvin is facing charges of second-degree murder and manslaughter in connection with Floyd's May 25 death, which was captured by bystanders on smartphone video. (Photo by Chandan Khanna/AFP Photo) 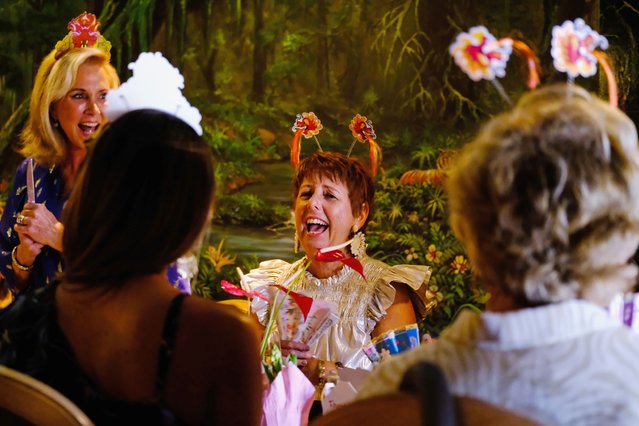 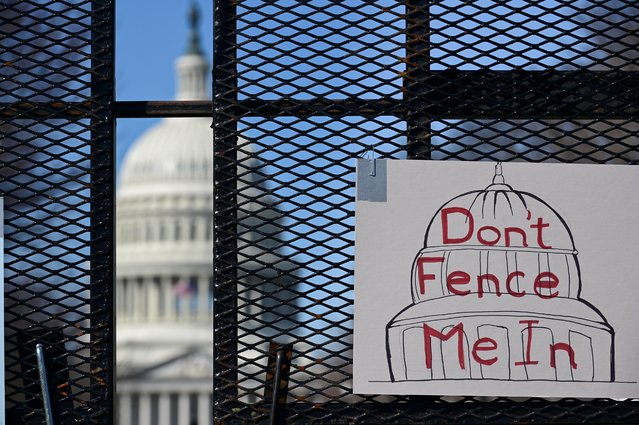 Protest signs hung by people with the group Arm in Arm DC to protest the extended presence of the surrounding security fence are seen at the U.S. Capitol in Washington, U.S. March 7, 2021. (Photo by Erin Scott/Reuters) 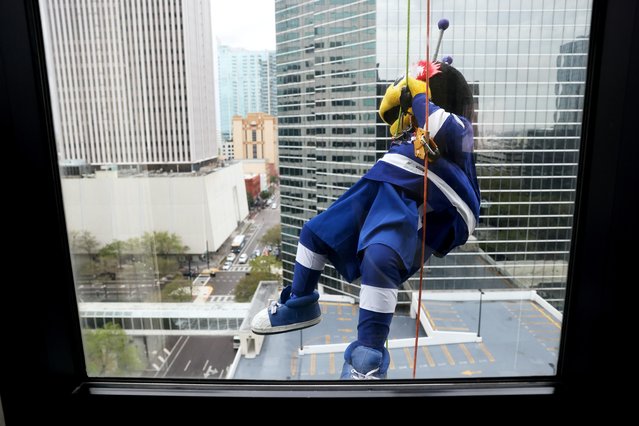 ThunderBug, mascot for the NHL’s Tampa Bay Lightning, rappels down the outside of a hotel as part of the annual Over the Edge charity fundraiser for the Big Brothers Big Sisters of Tampa Bay in Tampa, Florida, U.S. March 6, 2021. (Photo by Jonathan Ernst/Reuters) 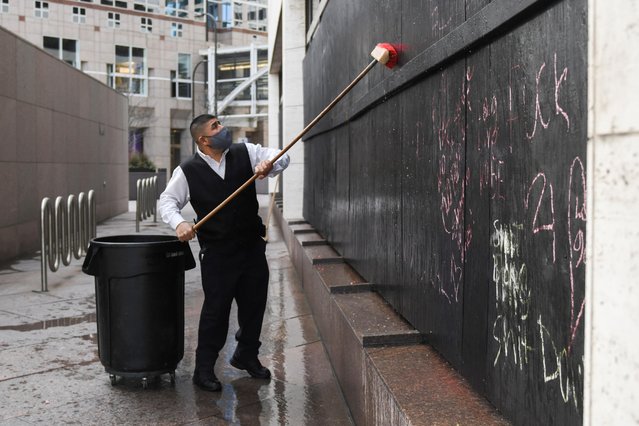 A worker washes away chalked messages of protest from the boarded up facade of the US Bank Plaza tower, across the street from the Hennepin County Government Center in downtown Minneapolis during the first day of jury selection for the trial of Derek Chauvin, the former Minneapolis policeman accused of killing George Floyd, in Minneapolis, Minnesota, U.S. March 8, 2021. (Photo by Nicholas Pfosi/Reuters) 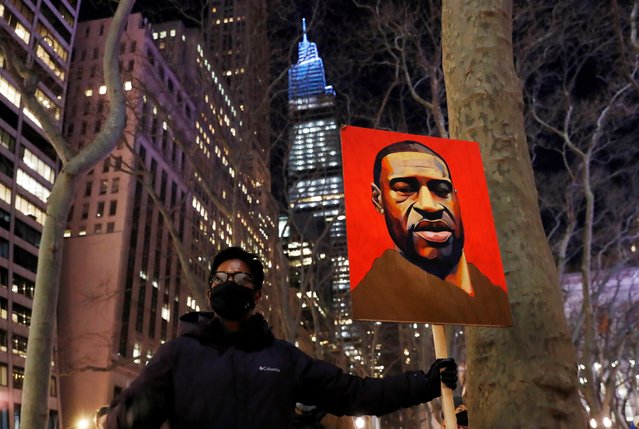 A demonstrator holds up an image of George Floyd during a rally on the first day of the trial of former Minneapolis police officer Derek Chauvin, on murder charges in the death of Floyd, in New York City, New York, U.S., March 8, 2021. (Photo by Shannon Stapleton/Reuters) 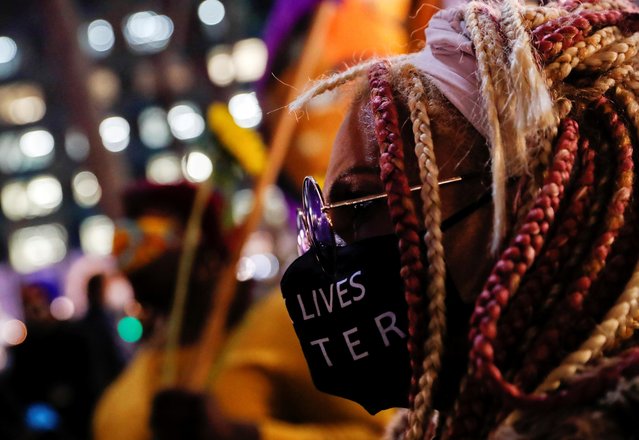 Demonstrators attend a rally on the first day of the trial of former Minneapolis police officer Derek Chauvin, on murder charges in the death of George Floyd, in New York City, New York, U.S., March 8, 2021. (Photo by Shannon Stapleton/Reuters) Dr. Mayank Amin draws the Pfizer-BioNTech coronavirus disease (COVID-19) vaccine at a clinic ran by Skippack Pharmacy in Collegeville, Pennsylvania, U.S., March 7, 2021. Montgomery County has one of the highest per capita vaccination rates in the state. (Photo by Hannah Beier/Reuters) 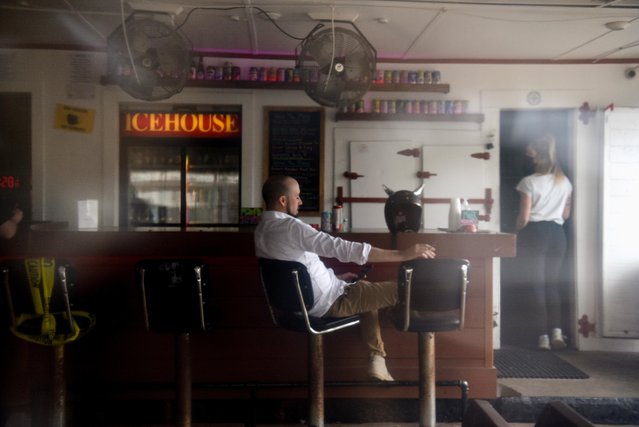 A man sits at a bar as the state of Texas prepares to lift its mask mandate and reopen businesses to full capacity during the coronavirus disease (COVID-19) pandemic in Houston, Texas, U.S., March 9, 2021. (Photo by Callaghan O'Hare/Reuters) 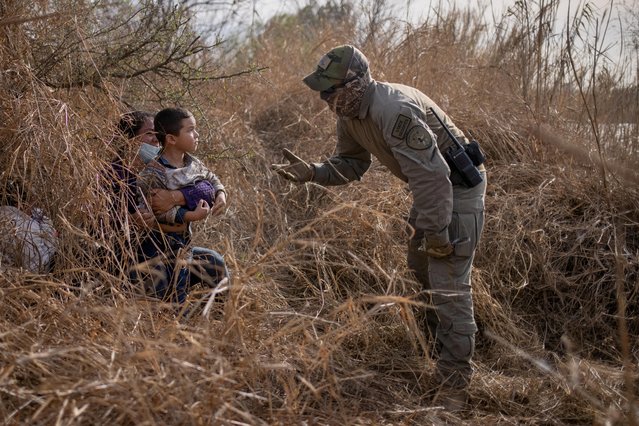 Texas State Trooper asks asylum-seeking migrants Edith and son Harbin Ordonez, 4, to come out of hiding after the Honduran nationals crossed the Rio Grande into the United States from Mexico on a raft in Penitas, Texas, March 9, 2021. About a dozen asylum-seeking migrants hid in the thick brush before being located by a U.S. Customs and Border Protection (CBP) Air and Marine Operations (AMO) helicopter and were taken into custody for processing. (Photo by Adrees Latif/Reuters) 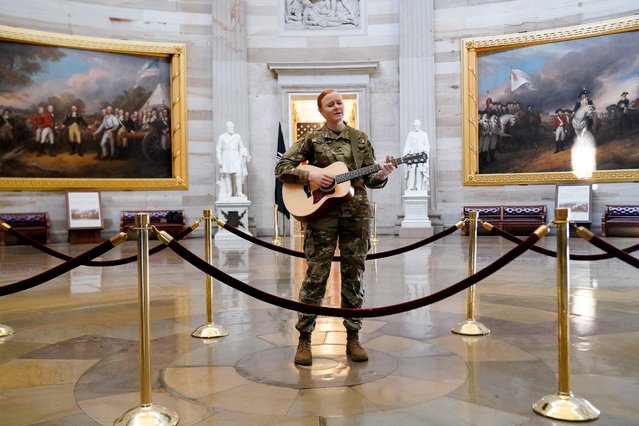 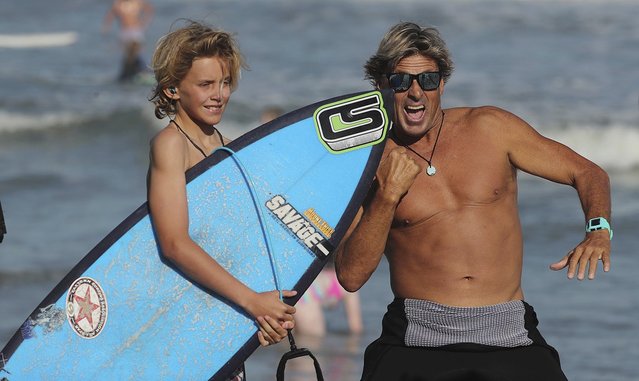 Surfers strike a pose as a mix of spring breakers, families, locals and others take advantage of the mild temperatures at Cocoa Beach, Fla., Friday, March 12, 2021. (Photo by Stephen M. Dowell/Orlando Sentinel via AP Photo) 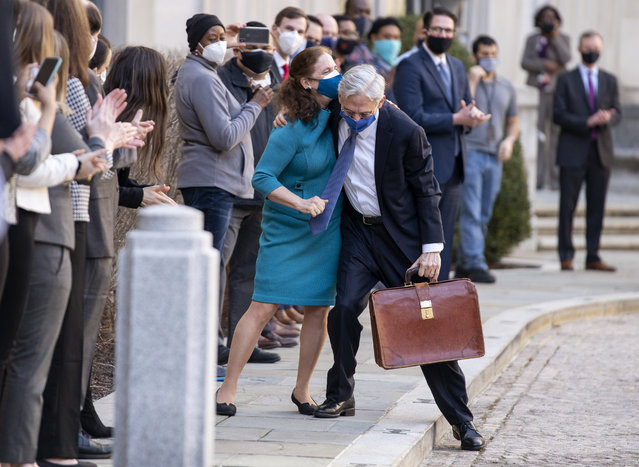 President Joe Biden's pick for attorney general Merrick Garland, hugs his wife Lynn as he arrives for his first day at the Department of Justice, Thursday, March 11, 2021, in Washington. Garland, a one time Supreme Court nominee under President Obama, was confirmed Wednesday by a Senate and will be sworn in later today. (Photo by Kevin Dietsch/Pool via AP Photo) 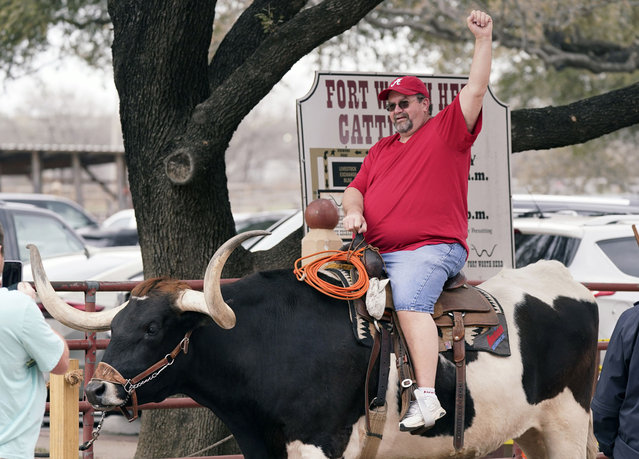 Jerome Holcomb of Birmingham, Ala., posses for a photo atop a longhorn steer at the Fort Worth Stockyards Thursday, March 11, 2021, in Fort Worth, Texas. The mask mandate to prevent the spread of COVID-19 has been cancelled in Texas. Holcomb said he was tired of wearing a face mask so he came to visit Fort Worth after the Alabama governor extended the mask mandate in his home state. (Photo by L.M. Otero/AP Photo) 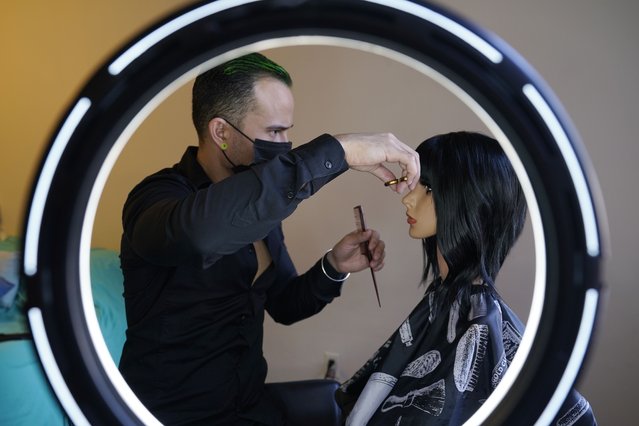 Venezuelan immigrant and hair stylist Gustavo Acosta, 36, trims a model's hair in his apartment, Tuesday, March 9, 2021, in New York. Acosta cheered when he learned that the Biden government had ordered temporary protected status for Venezuelans. He arrived in the U.S. in March 2019, illegally crossing the border with Mexico and turning himself over to authorities at a port of entry. He was detained for 13 months and applied for asylum but was denied and ordered deported. (Photo by Kathy Willens/AP Photo) 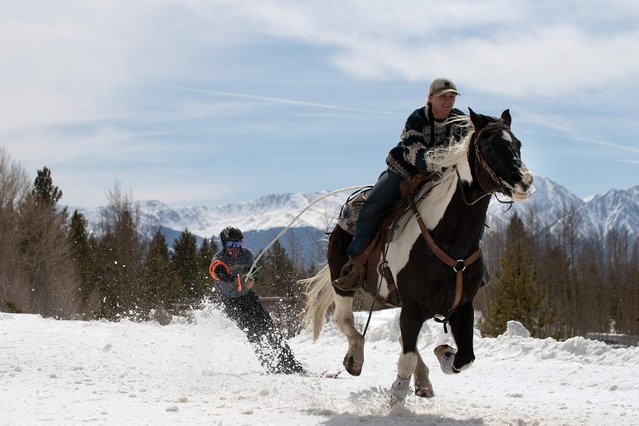 Rider Ali Briggs and skier Jerry Kissell navigate the race course during the 73rd annual Leadville Ski Joring weekend competition on March 7, 2021 in Leadville, Colorado. Skijoring, which has its origins as a competitive sport in Scandinavia, has been adapted over the years to include a team made up of a rider and skier who must navigate jumps, slalom gates, and the spearing of rings for points. In the spirit of the Wild West, and despite the coronavirus pandemic, Leadville continued the annual tradition by relocating the race course from the city center, and not allowing spectators. (Photo by Jason Connolly/AFP Photo) 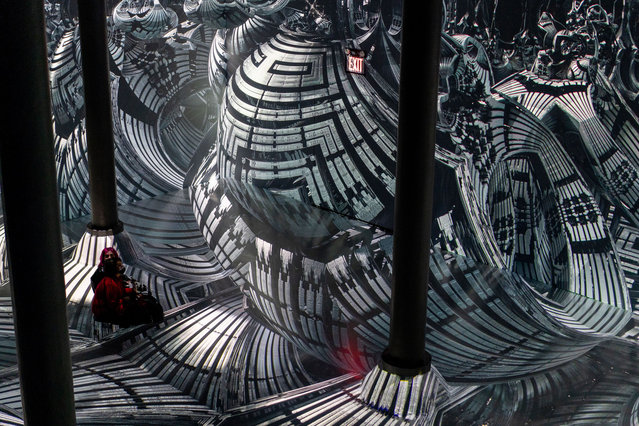 ARTECHOUSE kicks off its 2021 exhibition season with a collaboration with fractal artist Julius Horsthuis on March 5, 2021 in New York City. The immersive audio-visual installation is the gallery's most recent installation in a series of collaborations with some of the leading artists working at the intersection of art, science and technology. (Photo by David Dee Delgado/Getty Images) Children play on Reflect, an art installation by artist Jen Lewin in Brooklyn's Domino Park near the base of the Manhattan Bridge, Wednesday, March 10, 2021, in New York. After the virus descended on New York, the only sounds in the streets were wailing ambulance sirens. A year after the pandemic began, the nation’s largest metropolis – with a lifeblood based on round-the-clock hustle and bustle, push and pull – is adapting and showing new life. (Photo by John Minchillo/AP Photo)
Edit Del
16 Mar 2021 09:51:00, post received 0 comments
Publication archive:
←   →
Popular tags:
All tags
Last searches: