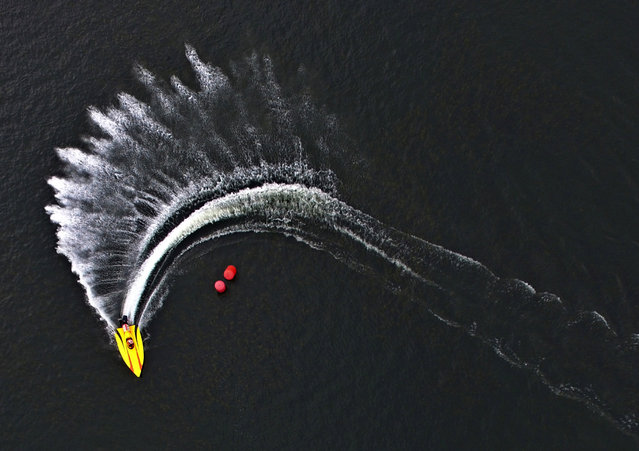 An aerial view shows a speed boat competing during the Russian powerboat championship on the Yenisei River in Krasnoyarsk, Siberia, Russia, July 1, 2017. (Photo by Ilya Naymushin/Reuters) 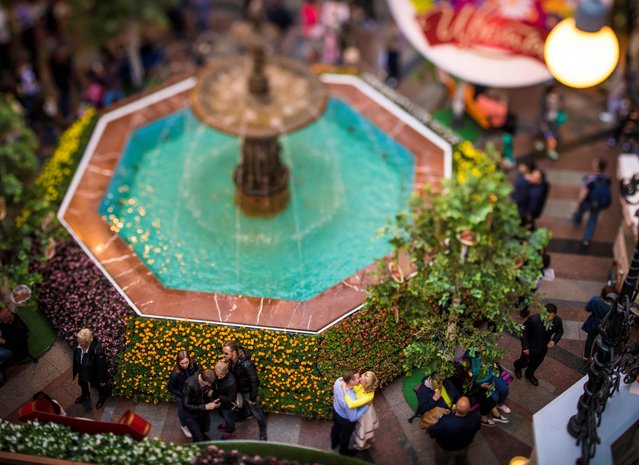 A picture taken with a tilt and shift lens shows near a fountain in the high-end GUM (State Department Store) shopping centre in Moscow on July 9, 2017. (Photo by Mladen Antonov/AFP Photo) 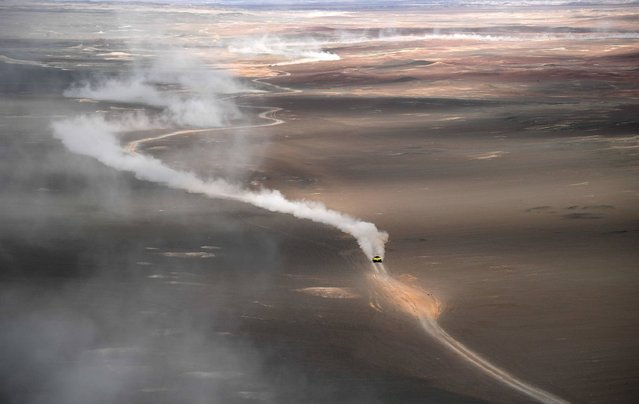 Wei Han and co-driver Liao Mon of China compete during the Stage 10 of the Silk Way 2017 between Hami and Dunhuang, China on July 18, 2017. (Photo by Franck Fife/AFP Photo) 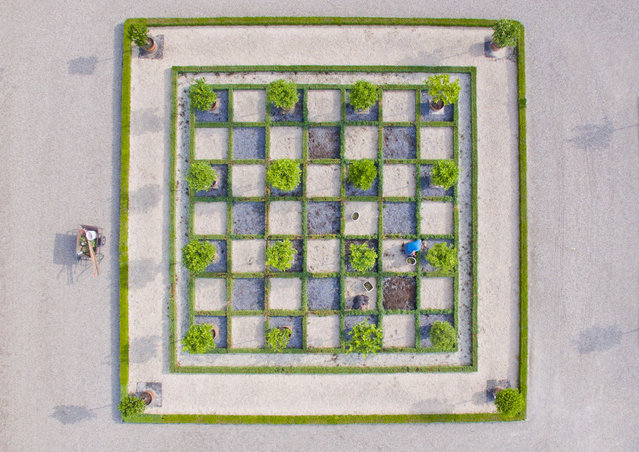 View of the “Herrenhaeuser Gaerten” (lit. “Herrenhaus Gardens”) in Hanover, Germany, 6 July 2017. Prince Ernst August of Hanover and his wife, fashion designer Ekaterina Malysheva, are said to celebrate their church wedding on 8 July with a reception at the Gallery of the Herrenhaus Gardens. (Photo by Julian Stratenschulte/DPA) 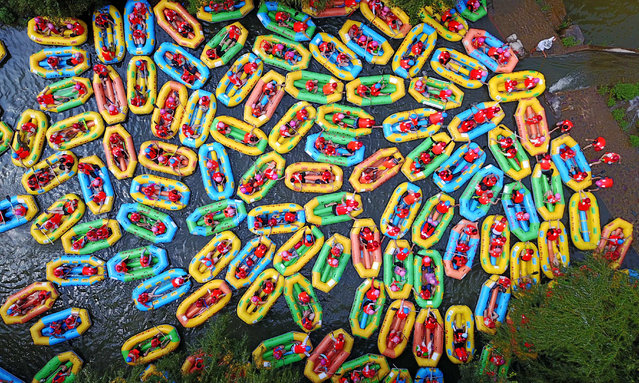 Aerial view of tourists in life vests and rubber rafts in the Grand Canyon of western Henan, Sanmenxia, China on August 5, 2017. (Photo by Imaginechina/Rex Features/Shutterstock) 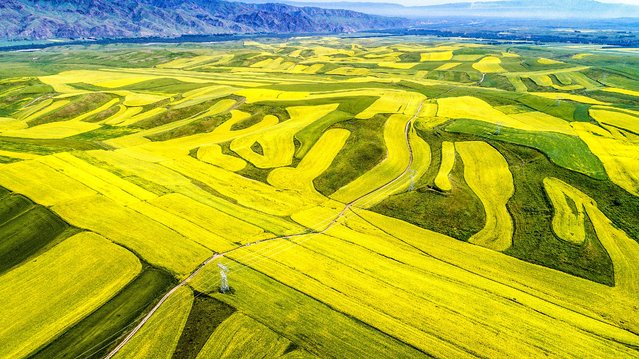 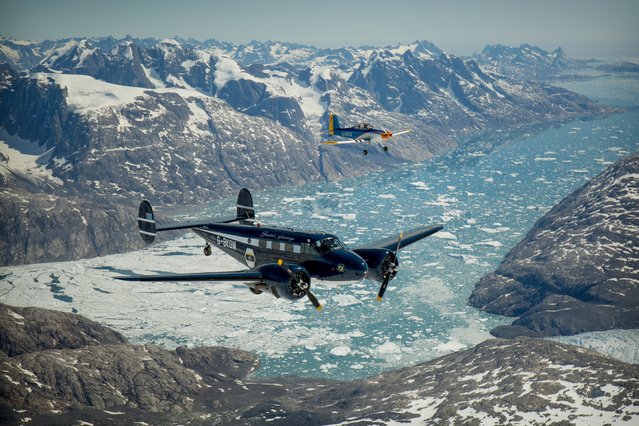 Three vintage aircraft have undertaken a British-led daredevil ten-day voyage from Scotland to Canada via the Arctic Circle. The three planes – a 65-year-old Beech 18, a homemade kit-built Van’s RV8 and a 1980 Saratoga – set out from Wick in Scotland on June 20, and spent 10 days in the air travelling across the Arctic via the snowy expanses of Iceland and Greenland. The spectacular trip was organized by aircraft enthusiasts Vintage Air Rally and captured on film by acclaimed photo-journalist Timothy Allen, who’s best known for his work on the BBC series The Human Planet. (Photo by Tim Allen/Barcroft Images) 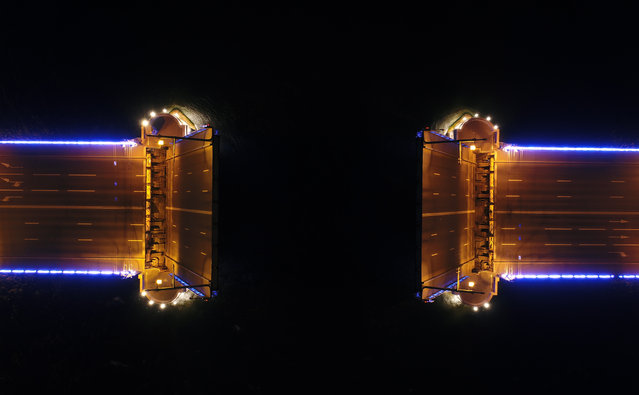 An aerial view of the raised Palace Bridge over the Neva river in St Petersburg, Russia on July 11, 2017. (Photo by Peter Kovalev/TASS) 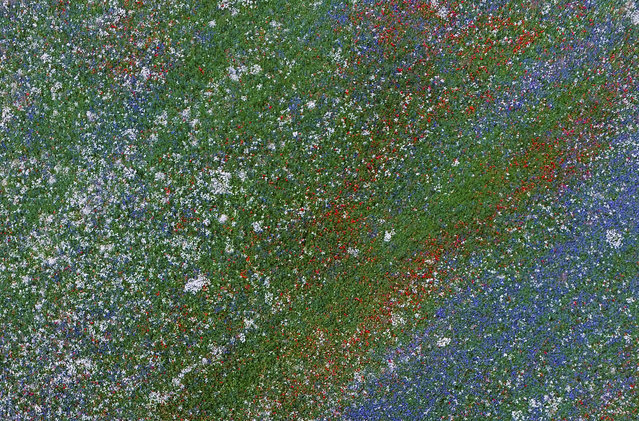 In this June 28, 2017 photo taken from a drone red poppy blossoms, blue cornflowers and white chamomile blossoms bloom on a field in Biegen, eastern Germany. (Photo by Patrick Pleul/DPA via AP Photo) 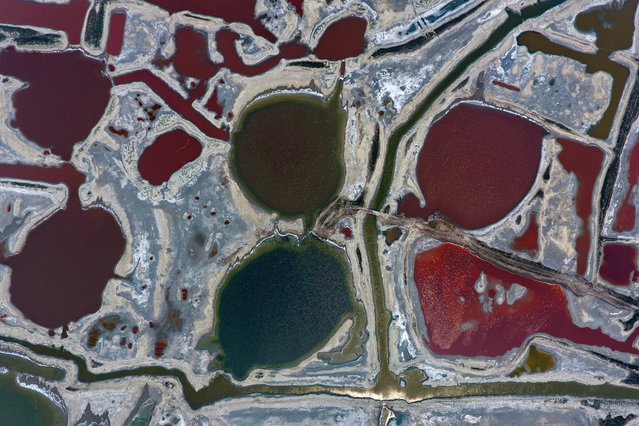 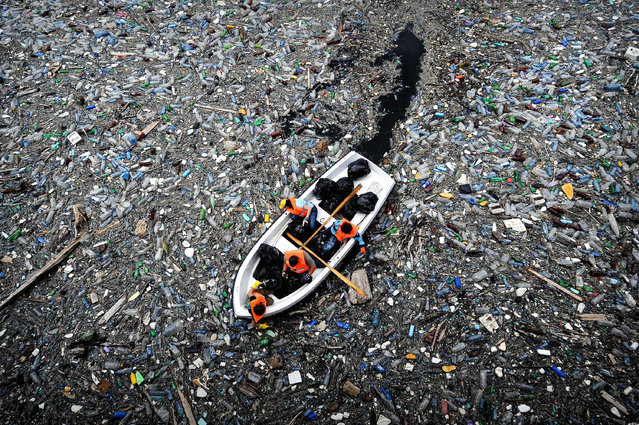 Volunteers try to clear a dam which is filled with discarded plastic bottles and other garbage, blocking Vacha Dam, near the town of Krichim, southern Bulgaria on April 25, 2009. (Photo by Dimitar Dilkoff/AFP Photo) 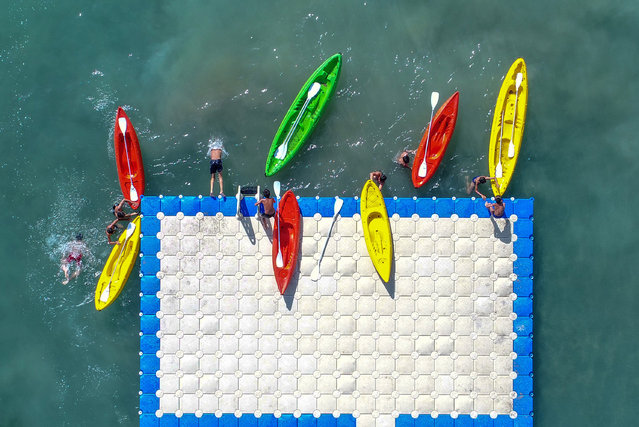 Boats are seen on the Van Lake as people swim on a summer day in Edremit District of Van Province, Turkey on July 20, 2017. (Photo by Ozkan Bilgin/Anadolu Agency/Getty Images) 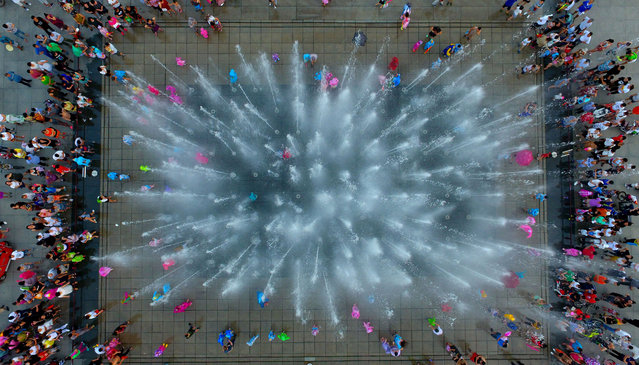 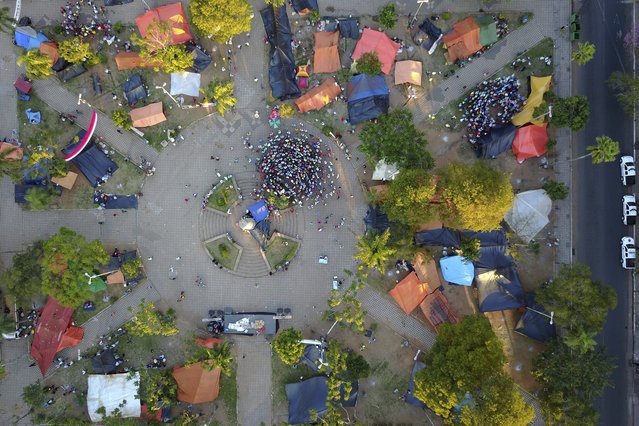 In this Wednesday, July 12, 2017 photo, farmers from northern Paraguay meet at their camp in the Plaza de Armas in downtown Asuncion, Paraguay. The farmers have been in the capital since Monday to demand that the government forgives their debts accumulated due to failed harvests. (Photo by Jorge Saenz/AP Photo) 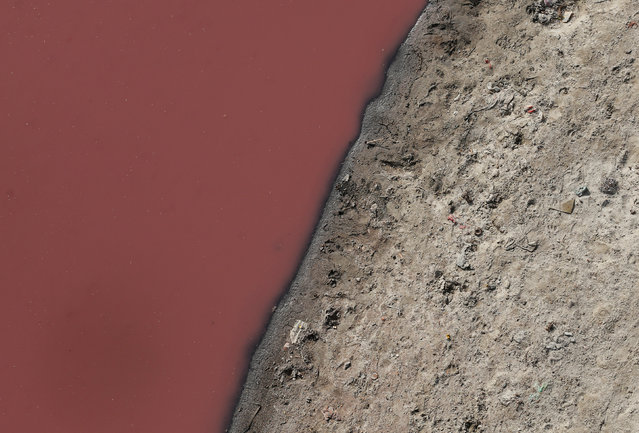 Polluted water in the river Ganges is seen in Kanpur, India, April 4, 2017. (Photo by Danish Siddiqui/Reuters) 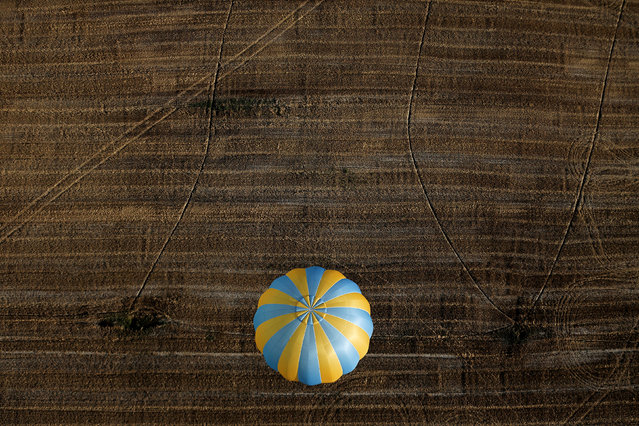 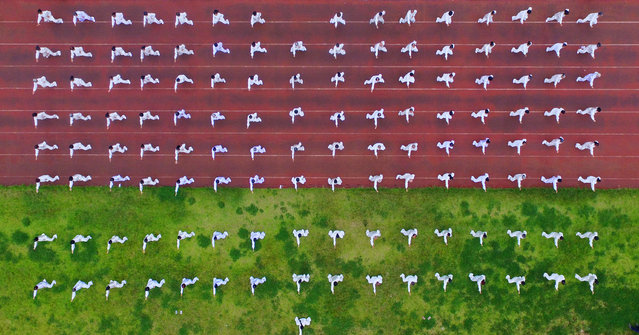 This photo taken using a drone shows people performing Tai Chi as part of a National Fitness Day event in Rongan in China's southwestern Guizhou province on August 8, 2017. National Fitness Day has been held on August 8 every year since 2009 to mark the anniversary of the opening of the 2008 Beijing Olympic Games. (Photo by AFP Photo/Stringer) 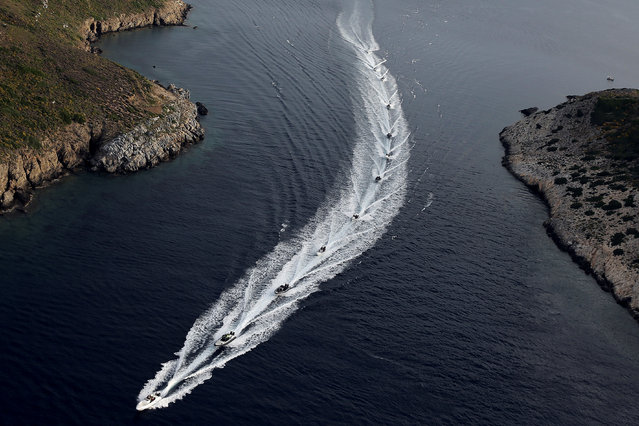 Doctors of the Aegean Team depart for the island of Donousa from the island of Fournoi, Greece May 13, 2017. (Photo by Alkis Konstantinidis/Reuters) 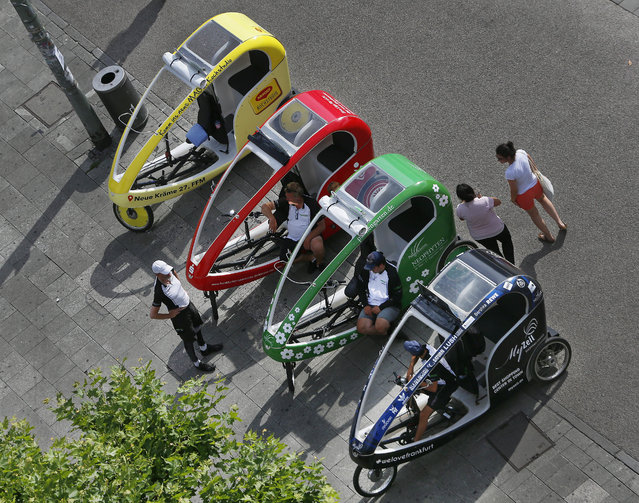