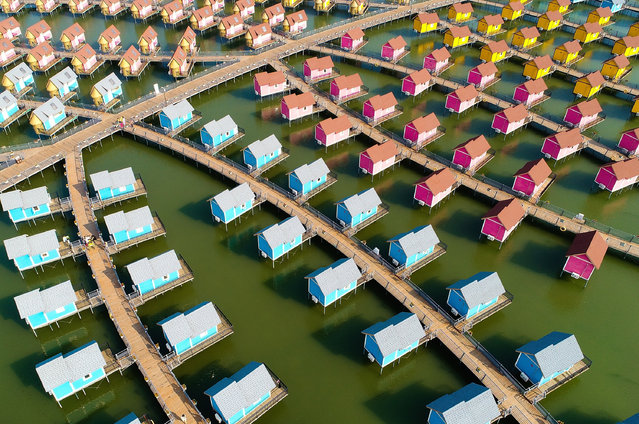 A general view of the dutch-style cabins of Yue Tuo Island Resort near Laoting on September 18, 2017 in Tangshan, China. (Photo by Lintao Zhang/Getty Images) 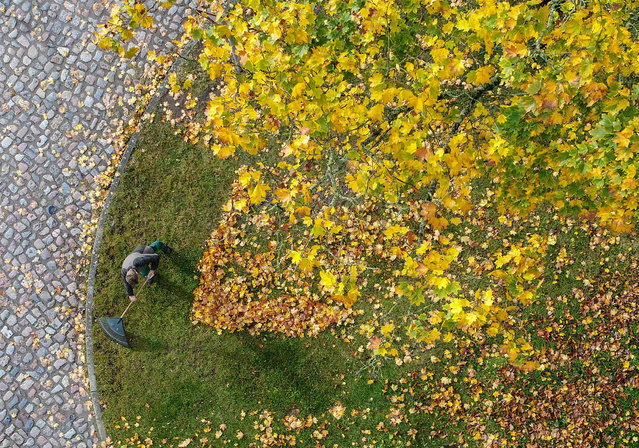 A man clears away autumn foliage beneath a maple tree in Sieversdorf, Germany, 8 October 2017. Aerial view taken with a drone. (Photo by Patrick Pleul/DPA/Zentralbild) 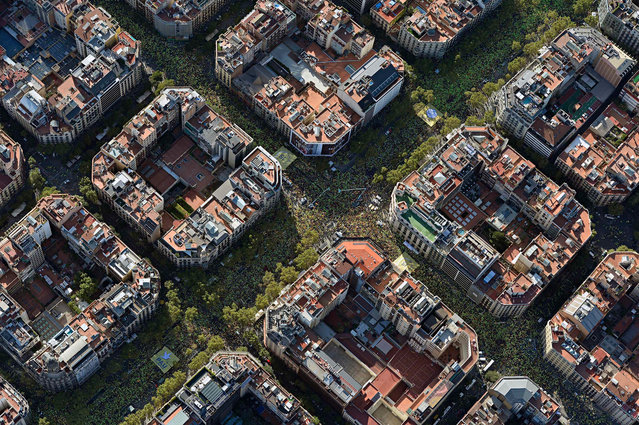 This handout picture released on September 11, 2017 by the Assemblea Nacional Catalana (Catalan National Assembly) shows an aerial view of people holding a giant banner reading in Catalan “Peace” during a pro- independence demonstration, on September 11, 2017 in Barcelona during the National Day of Catalonia, the “Diada”. (Photo by Roser Vilallonga/AFP Photo) 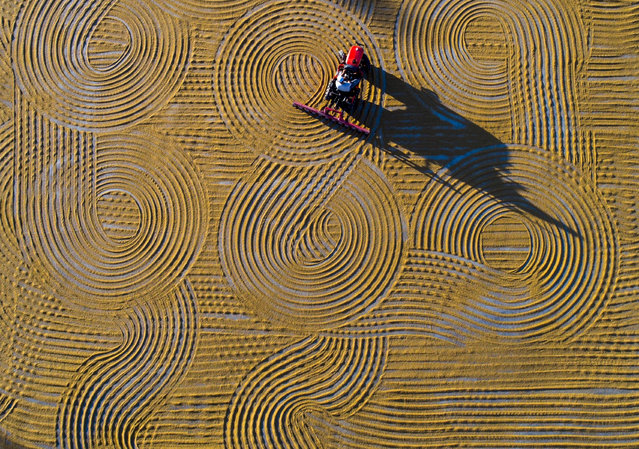 Workers spread bulgur wheat on a field with conventional techniques for drying under the sun in Gaziantep, which is the member of UNESCO Creative Cities Network on gastronomy, Turkey on September 8, 2017. (Photo by Mehmet Akif Parlak/Anadolu Agency/Getty Images) 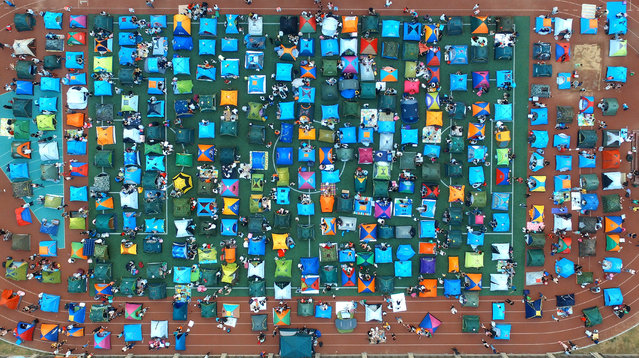 Aerial view of about 300 tents put up by elementary students and their parents on the playground on September 15, 2017 in Shijiazhuang, Hebei Province of China. A primary school in Shijiazhuang held the parent-child activities for their first-year students. (Photo by VCG/VCG via Getty Images) 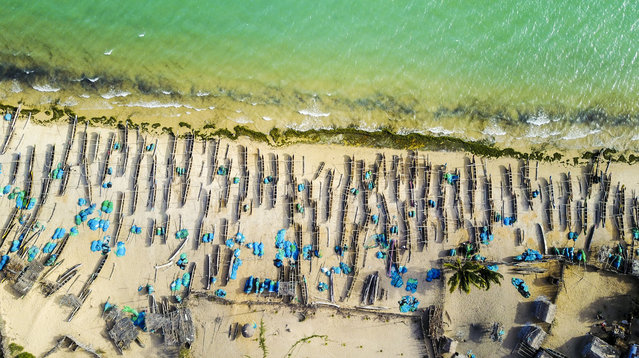 Wooden fisherman boats are seen at the Ifaty beach in Toliara, Madagascar on September 3, 2017. (Photo by Ahmet Izgi/Anadolu Agency/Getty Images) 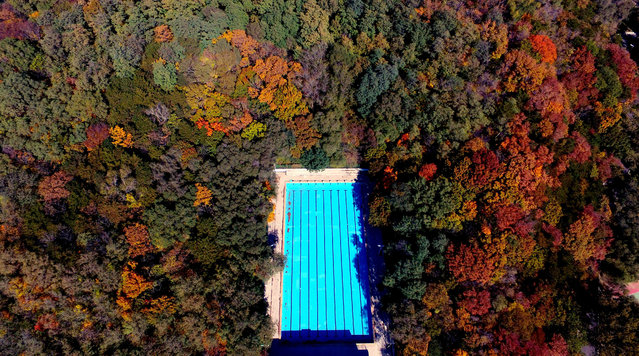 A swimming pool can be seen among forest in Shenyang, northeast China's Liaoning Province on October 15, 2017. (Photo by Sipa Asia/Rex Features/Shutterstock) 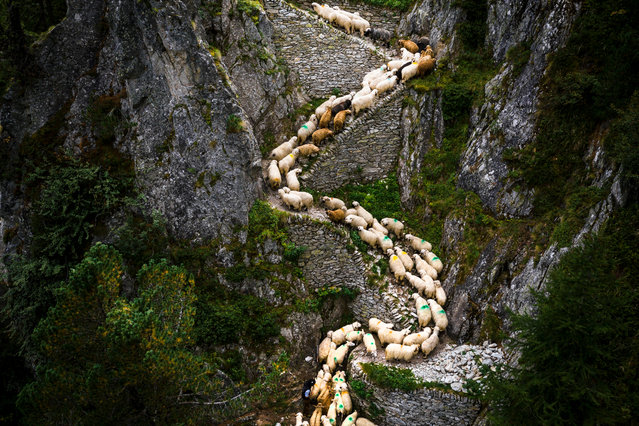 The picture taken with a drone shows a flock of alpine sheep being lead on a steep mountain path on their way to Belalp near Blatten, Switzerland, 26 August 2017. Shepherds are celebrated over the traditional shepherd weekend, known as “Schaeferwochenende”, after leading almost 800 sheep during a three-day hike from the summer pastures, high above the Aletsch glacier, down to Belalp in the canton of Valais for the winter season. (Photo by Valentin Flauraud/EPA/EFE) 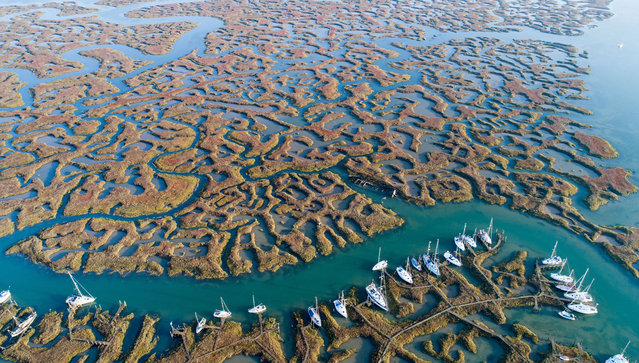 An aerial view of marshland in Essex, England on October 15, 2017 that has received an influx of visitors after being featured in the opening credits of ITV drama “Liar”. (Photo by Bav Media/Rex Features/Shutterstock) 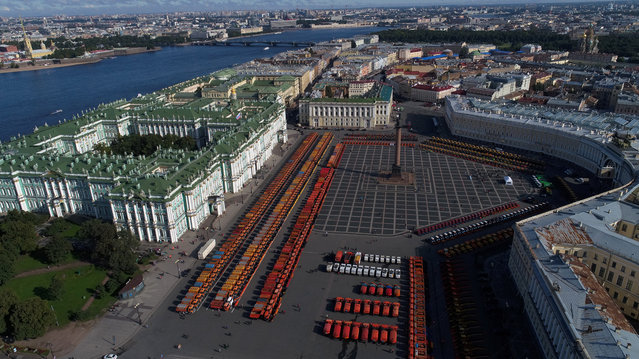 Snow ploughs and gritters on display in Palace Square ahead of the upcoming winter in St Petersburg, Russia on September 21, 2017. (Photo by Peter Kovalev/TASS/Getty images) 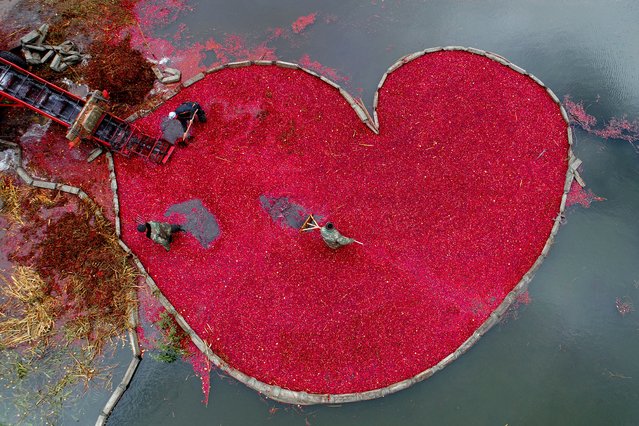 A picture taken with a drone on October 9, 2017 shows Belarusians harvesting cranberries at a farm in the village of Selishche, some 290 km south of Minsk. (Photo by Sergei Gapon/AFP Photo) 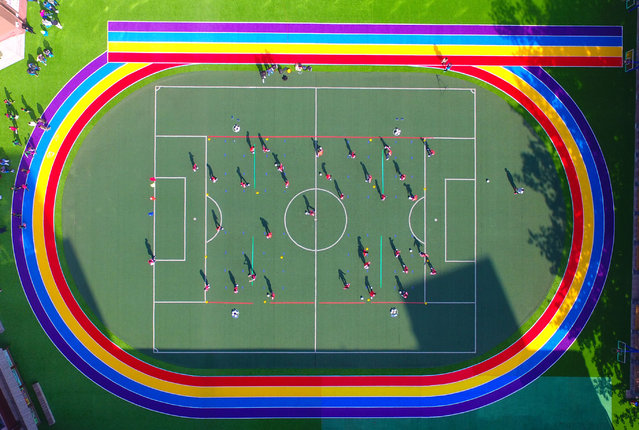 Rainbow colours on a running track at a school, Shenyang, Liaoning Province, China on October 13, 2017. (Photo by Sipa Asia/Rex Features/Shutterstock) 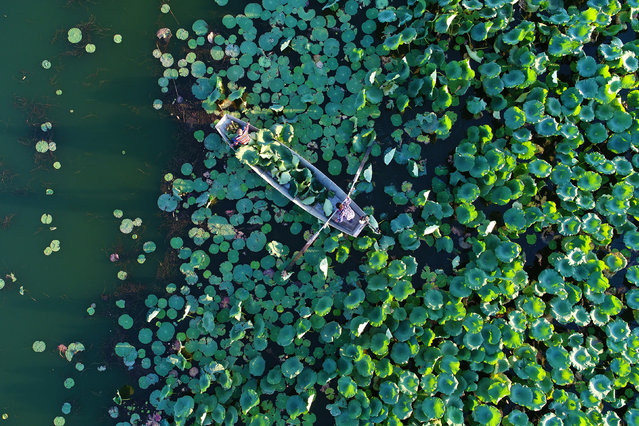 People pick lotus seeds along the reservoir of Tuhe River in Anjiazhuang Village of Kaiping District, in Tangshan City of north China's Hebei Province on October 5, 2017. Since this March, Tangshan started to promote the ecological protection of Tuhe River for lotus planting, which boosted the coordinated development of local tourism and eco-environment. (Photo by Mu Yu/Xinhua/Barcroft Images) 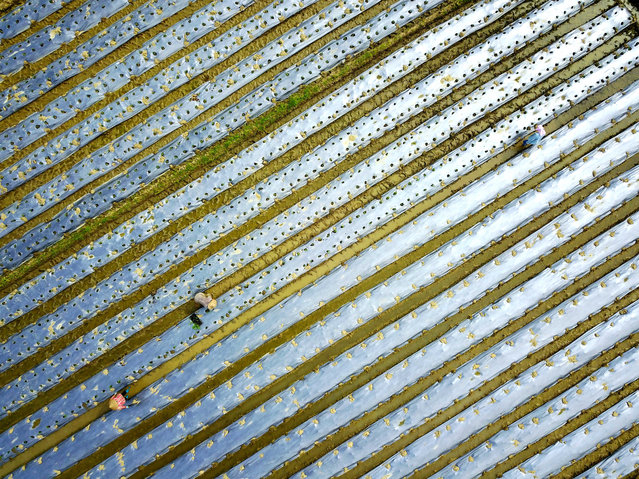 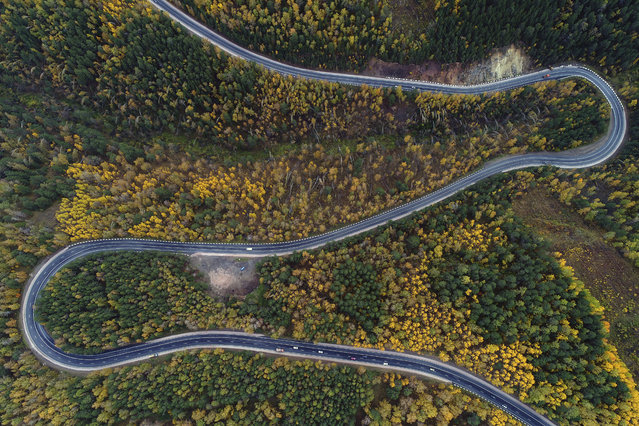 An aerial view shows the R257 “Yenisei” federal highway in the Siberian Taiga area outside Krasnoyarsk, Russia on September 21, 2017. (Photo by Ilya Naymushin/Reuters) 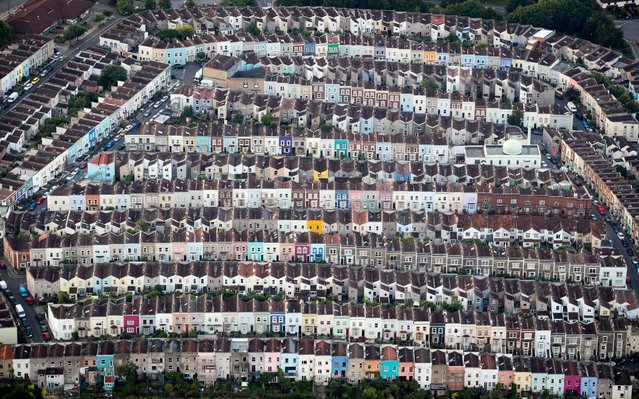 Painted houses in terraced streets are seen from the air on the second day of the Bristol International Balloon Fiesta on August 11, 2017 in Bristol, England. More than 130 balloons have gathered for the four day event, now in its 39th year and now one of Europe's largest annual hot air balloon events, being hosted in the city that is seen by many as the home of modern ballooning. (Photo by Matt Cardy/Getty Images) 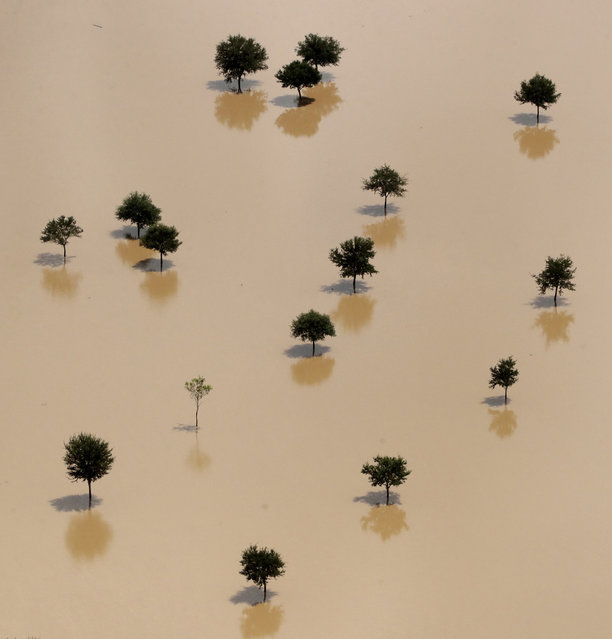 Trees rise from a field submerged by water from the flooded Brazos River in the aftermath of Hurricane Harvey Friday, September 1, 2017, near Freeport, Tex. (Photo by Charlie Riedel/AP Photo) 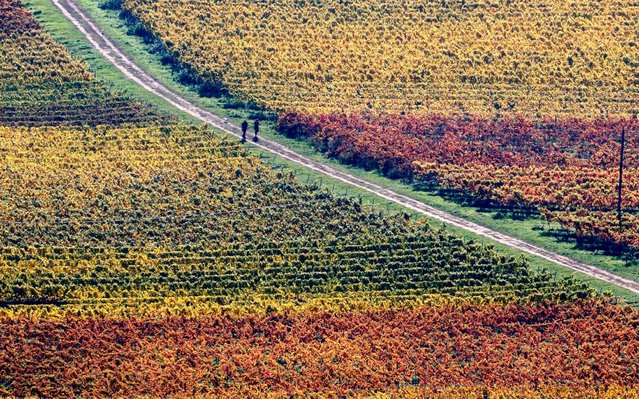 Autumn colored vineyards around the castle of Hambach in Hambach near Neustadt an der Weinstrasse, Germany, 17 October 2017. (Photo by Ronald Wittek/EPA/EFE) 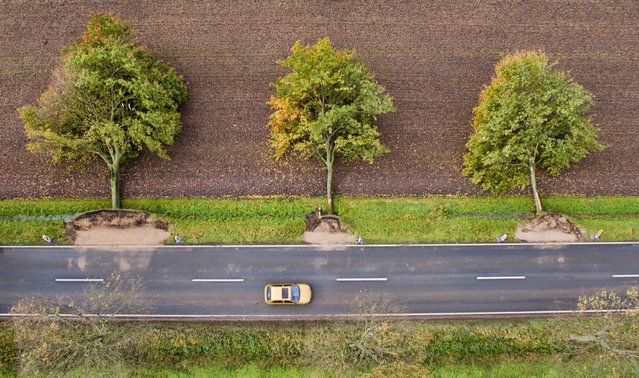