Fact Women in the U.S. Military 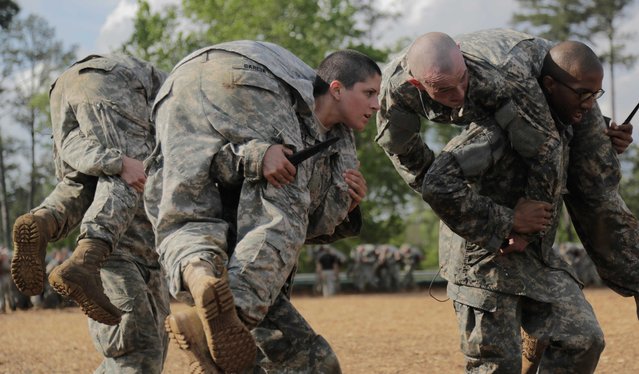 Then U.S. Army First Lieutenant Kirsten Griest (C) and fellow soldiers participate in combatives training during the Ranger Course on Fort Benning, Georgia, in this handout photograph taken on April 20, 2015 and obtained on August 20, 2015. When Griest and another woman completed the daunting U.S. Army Ranger school this week they helped end questions about whether women can serve as combat leaders, as the Pentagon is poised to open new roles, including elite Navy SEALs, to women in coming months. The feat by Griest and First Lieutenant Shaye Haver followed a re-evaluation of the role of women after their frontline involvement in Iraq and Afghanistan and the end of a rule barring them from combat roles in 2013. (Photo by Spc. Nikayla Shodeen/Reuters/U.S. Army) 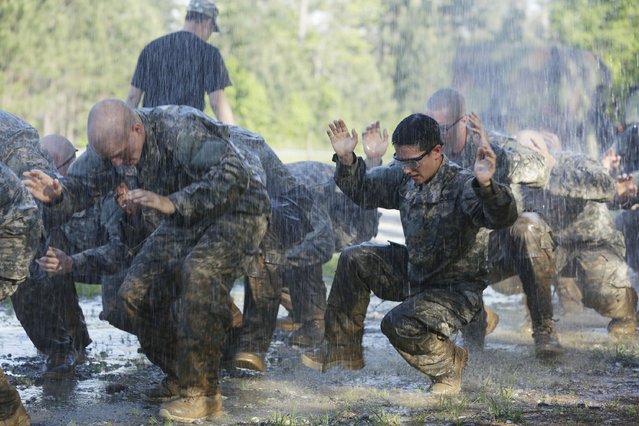 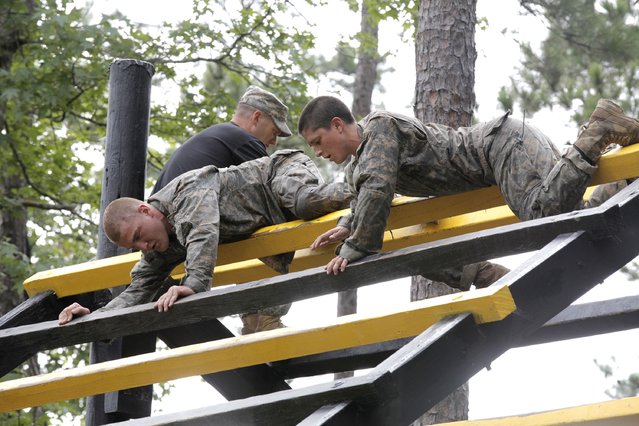 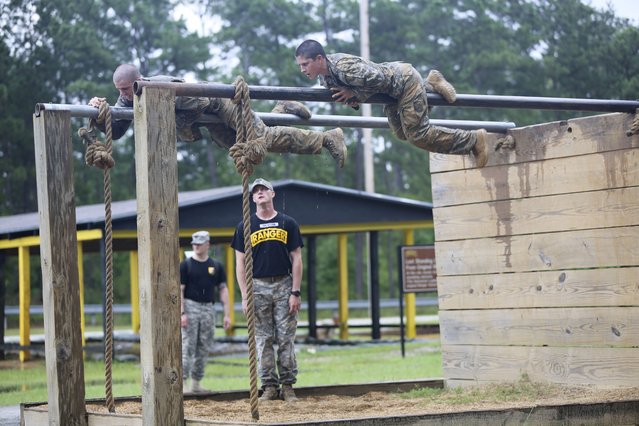 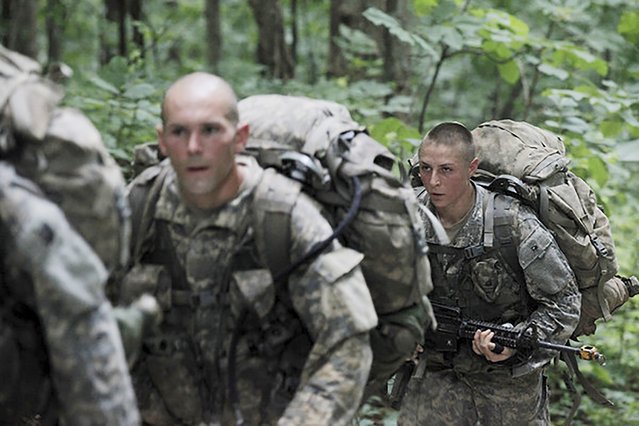 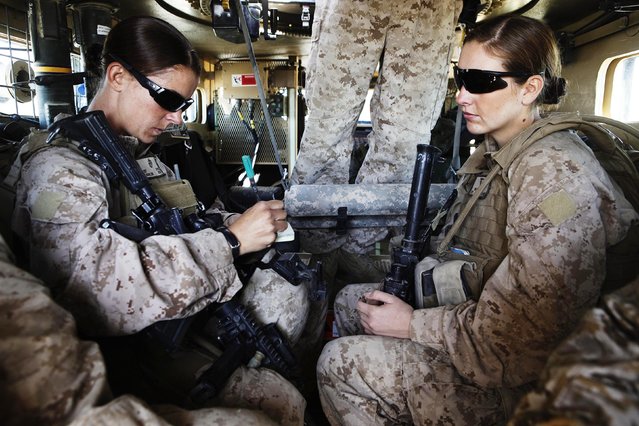 U.S. Marine and Female Engagement Team leader Sgt. Sheena Adams (L) and H.N. Shannon Crowley from First Battalion, Eighth Marines sit in an armored vehicle before heading out on an operation from their base at Musa Qala in southern Afghanistan's Helmand province, November 13, 2010. (Photo by Finbarr O'Reilly/Reuters) 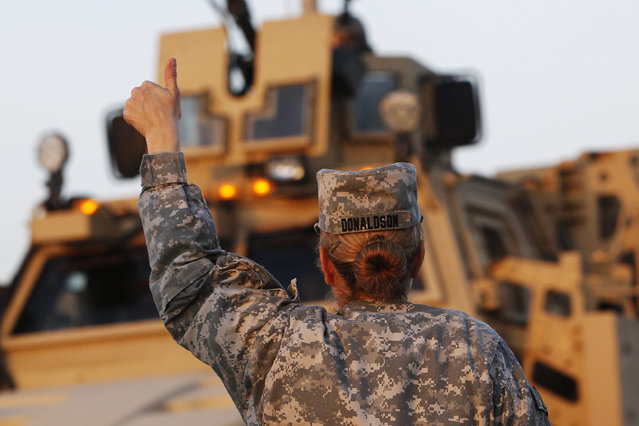 U.S. Army convoys are given the thumbs up from a fellow soldier after crossing into Kuwait during the last convoy out of Iraq December 18, 2011. (Photo by Shannon Stapleton/Reuters) 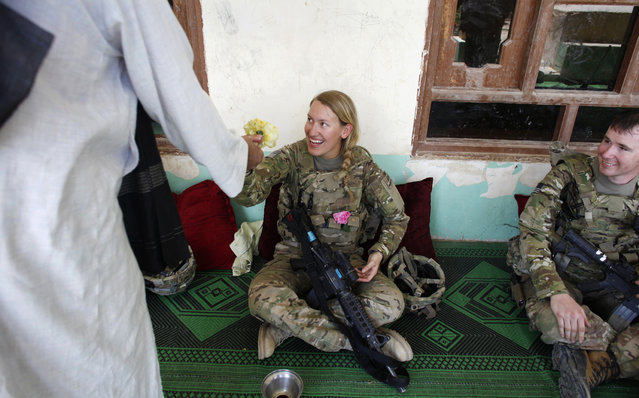 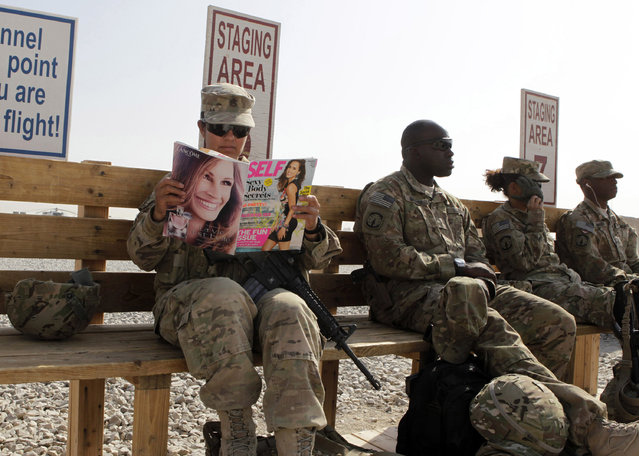 U.S. Army soldier SSG Norma Gonzales of 426 Civil Affairs Battalion reads a magazine next to fellow soldiers while waiting to be ferried by a helicopter to different U.S. military bases in Kandahar, southern Afghanistan October 11, 2012. (Photo by Erik De Castro/Reuters) 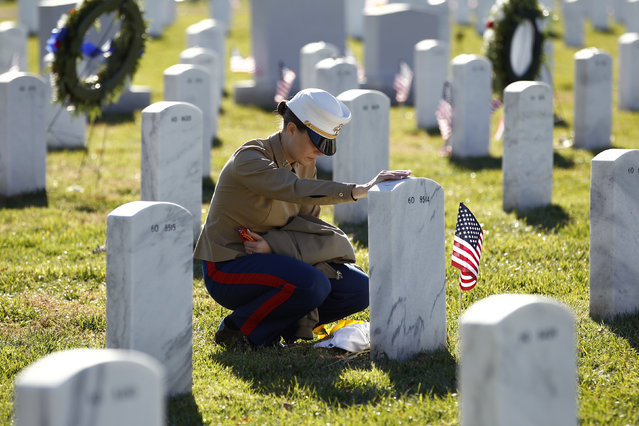 U.S. Marine Capt. Jill A. Leyden of Easton, Maryland, touches the grave of her friend Major Megan M. McClung at Arlington National Cemetery in Virginia on Veterans Day, November 11, 2010. McClung was killed during Operation Iraqi Freedom on December 6, 2006. Leyden and McClung served together in Iraq. (Photo by Kevin Lamarque/Reuters) 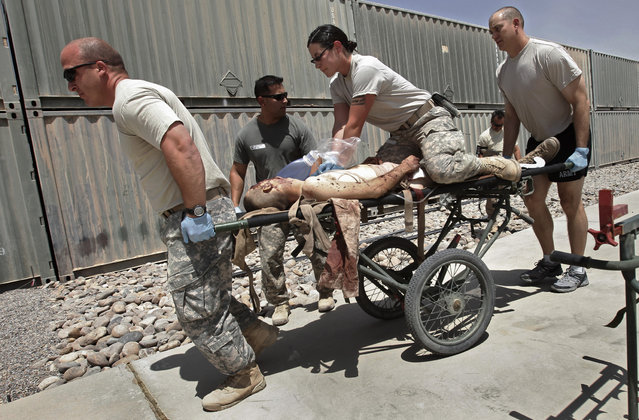 Hospital personnel attempt to revive a mortally wounded Marine after he was brought in by medevac helicopter at Camp Dwyer near the town of Marjah in Helmand Province, Afghanistan, August 22, 2010. (Photo by Bob Strong/Reuters) 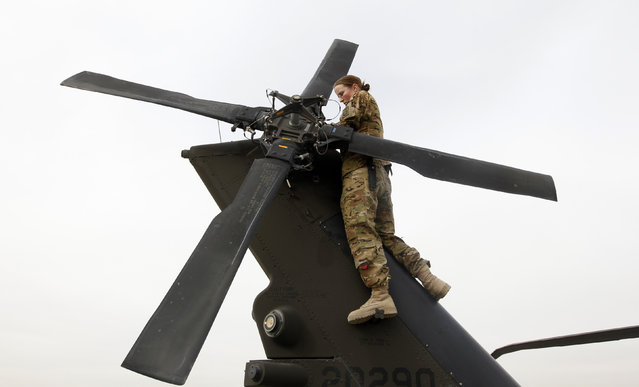 U.S. Army Specialist Nicole Derk of the C Company 3/82 Dustoff MEDEVAC performs a system check on a helicopter at the beginning of her shift in Logar province, eastern Afghanistan, November 21, 2011. (Photo by Umit Bektas/Reuters) 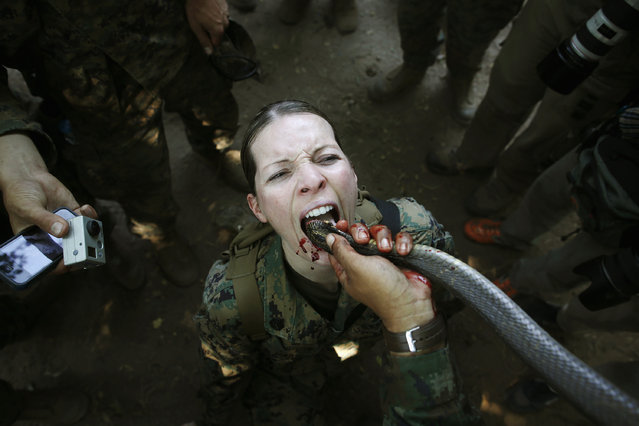 A U.S. marine drinks the blood of a cobra during a jungle survival exercise with the Thai Navy as part of the “Cobra Gold 2013” joint military exercise, at a military base in Chon Buri province, Thailand February 20, 2013. (Photo by Damir Sagolj/Reuters) 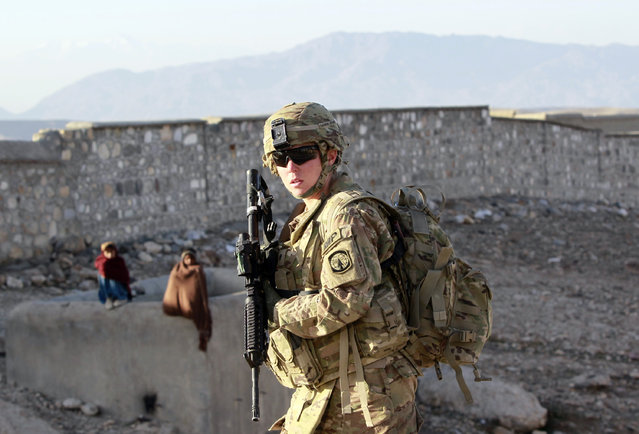 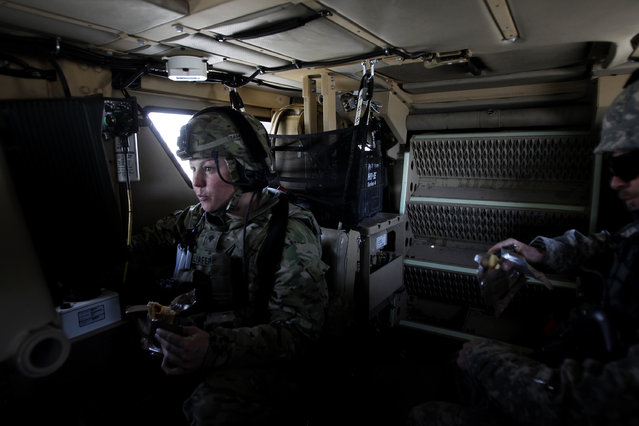 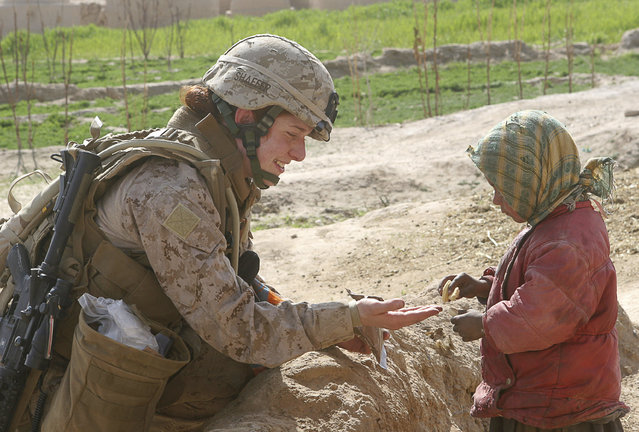 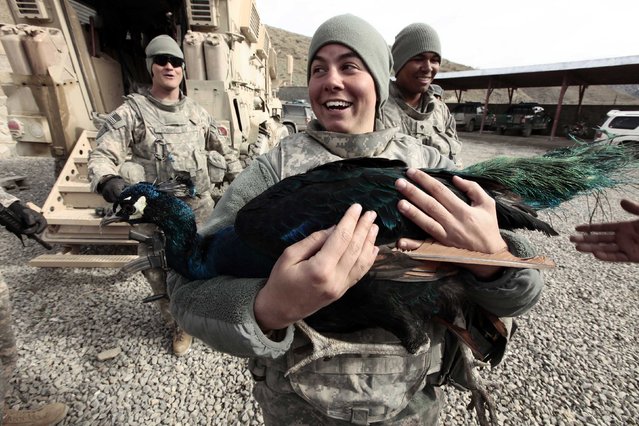 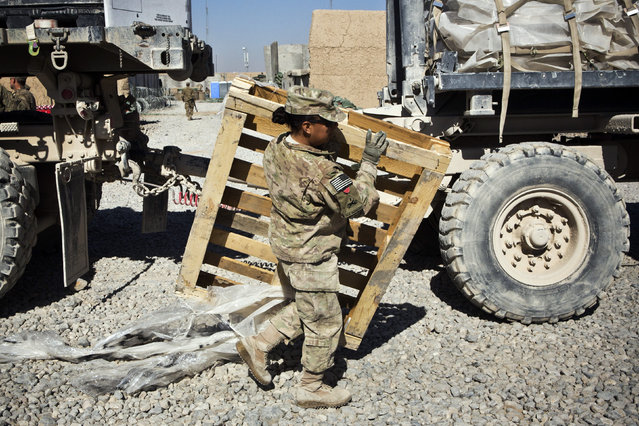 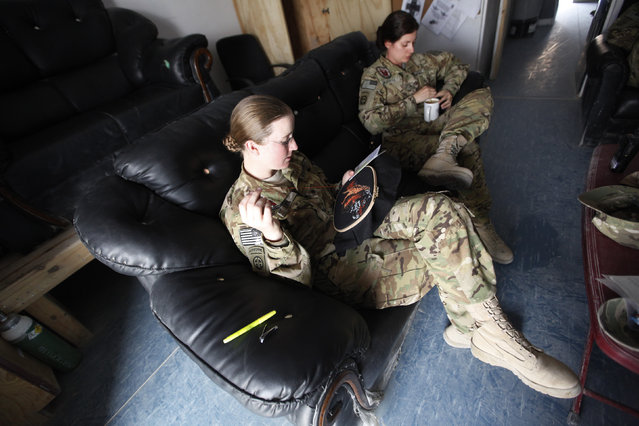 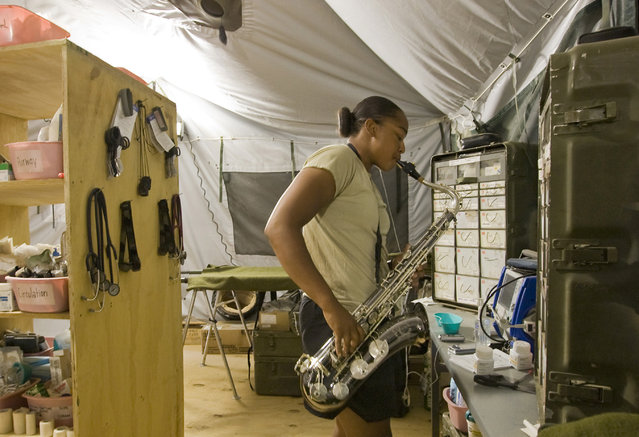 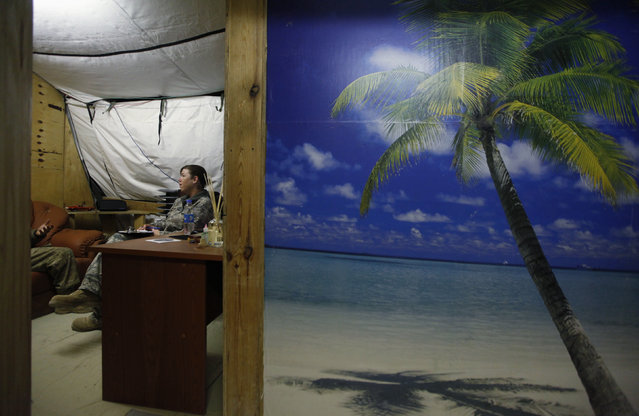 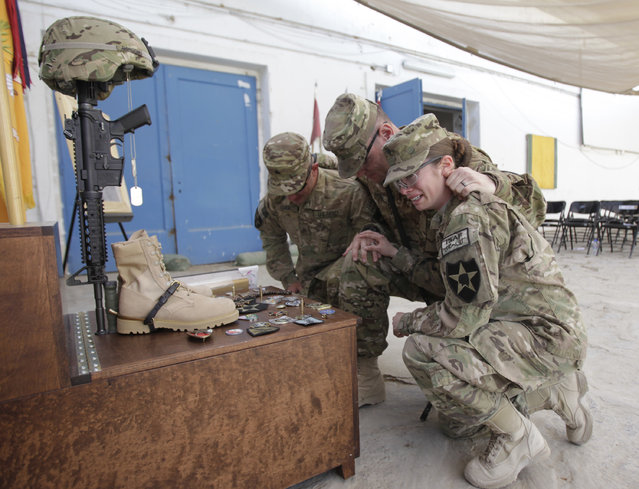 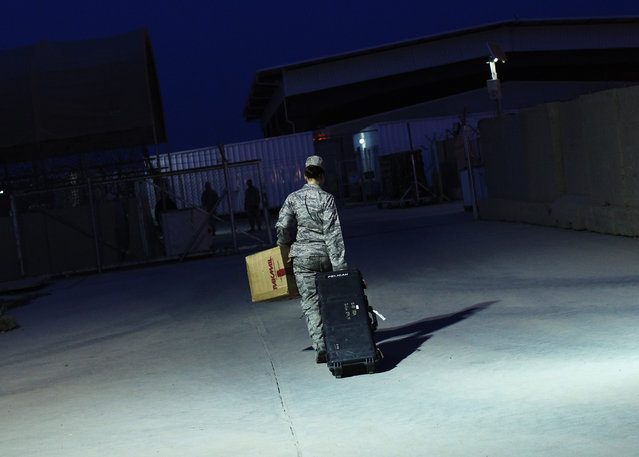