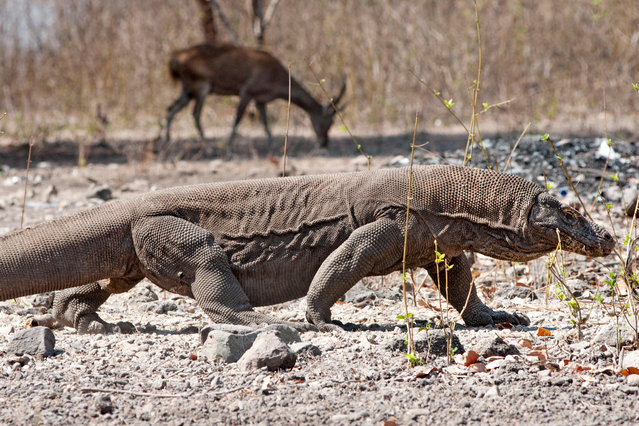 The Komodo dragon (Varanus komodoensis) was the most popular species overall based on English language Wikipedia page views. It is the world’s largest lizard, living on the islands of Komodo, Rinca and other smaller islands, and on Flores island in Indonesia. (Photo by Eric Nathan/Alamy) 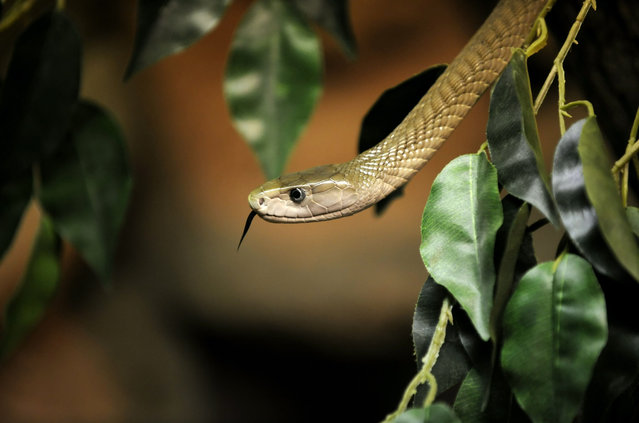 The black mamba (Dendroaspis polylepis). They are actually brown in colour and get their name from the blue-black of the inside of their mouths, which they display when threatened. They live in the savannahs and rocky hills of southern and eastern Africa. They are Africa’s longest venomous snake, reaching up to 14 feet (4,27 m) in length. (Photo by Mikko Stig/Rex Features/Shutterstock) 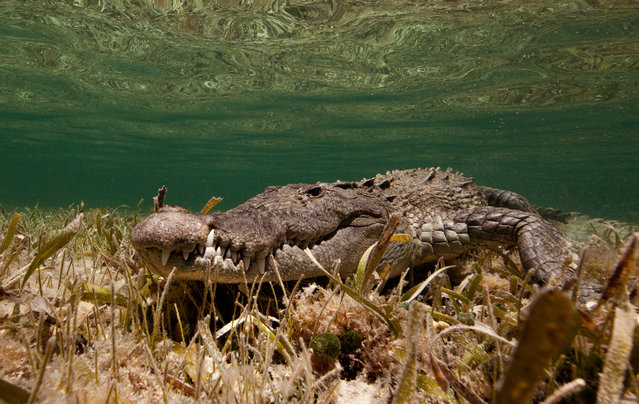 An American saltwater crocodile (Crocodylus acutus) in Banco Chinchorro biosphere reserve in Coatzacoalcos, Mexico. It is distinguishable from its cousin, the American alligator, by its longer, thinner snout, its lighter colour, and two long teeth on the lower jaw. This species is among the largest of the world’s crocodiles, with central and south American males reaching lengths of up to 20 feet (6,1 m). (Photo by J. Chauser/Alamy Stock Photo) 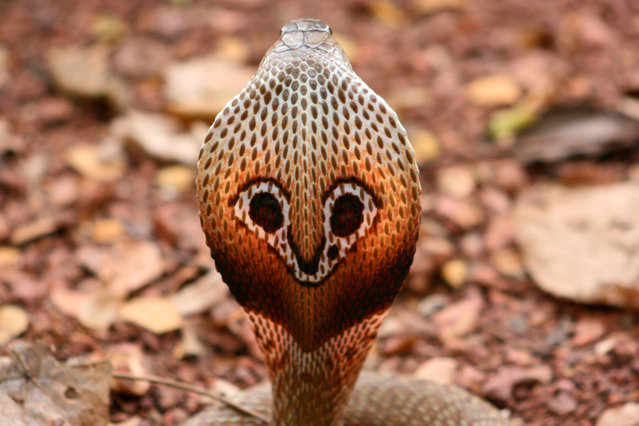 King cobras (Ophiophagus hannah) live mainly in the rain forests and plains of India, southern China, and southeast Asia, and their colouring can vary greatly from region to region. They are comfortable in the trees, on land, and in water, feeding mainly on other snakes, lizards, eggs, and small mammals. They are the only snakes in the world that build nests for their eggs. They feature prominently in folklores and ancient legends of India, and are the snake-charmer’s snake. (Photo by Biju/Alamy Stock Photo) 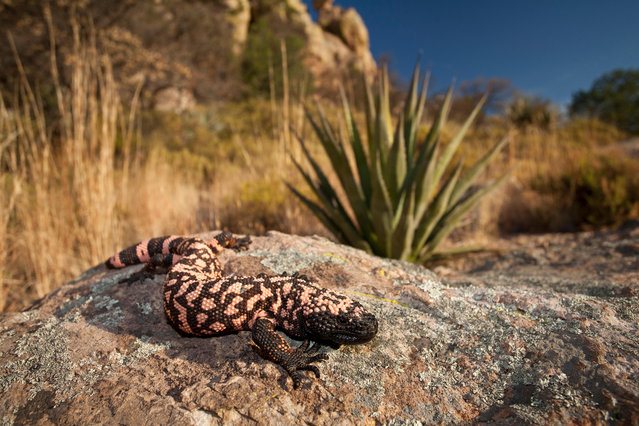 Reticulate Gila monster (Heloderma suspectum) in Arizona, US. A heavy, slow-moving lizard, up to two-feet long, it is the only venomous lizard native to the US and one of only two known species of venomous lizards in North America. (Photo by Jared Hobbs/Alamy Stock Photo) 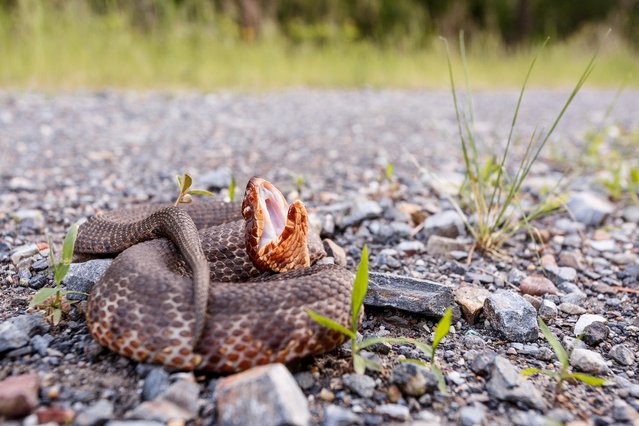 Western cottonmouth (Agkistrodon piscivores leucostoma), a venomous pit viper native to eastern US. It derives its name from the white lining of its mouth. (Photo by Rex Lisman/Getty Images) 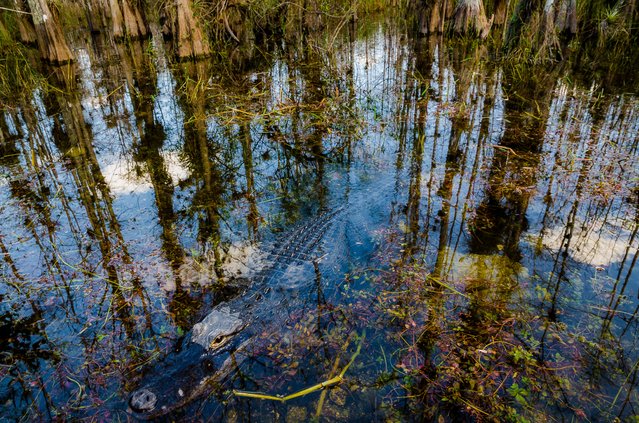 American alligator (Alligator mississippiensis) in Big Cypress, Florida. It inhabits freshwater wetlands, such as marshes and cypress swamps from Texas to North Carolina. It is distinguished from the American crocodile by its broader snout, with overlapping jaws and darker colouration, and is less tolerant of saltwater but more tolerant of cooler climates. (Photo by Viktor Posnov/Getty Images) 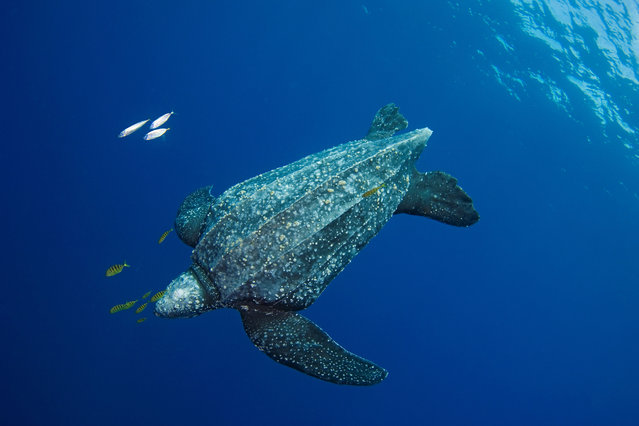 A leatherback turtle (Dermochelys coriacea) with juvenile golden trevally (Gnathanodon speciosus) trailing, off of Kei Kecil, part of the Maluku Islands, Indonesia. Unlike most sea turtles, the leatherback lacks a bony shell, as the name suggests, it has a leathery covering of thick skin and oily flesh on its carapace. It is the largest sea turtle and is critically endangered. (Photo by RGB Ventures LLC dba SuperStock/Alamy Stock Photo) 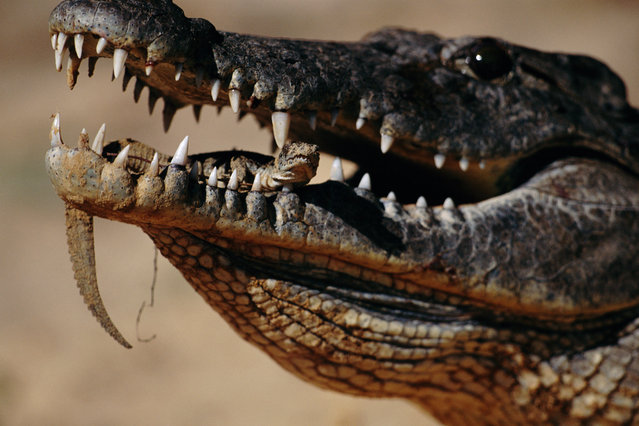 Newly hatched Nile crocodile (Crocodylus niloticus) held in its parent’s mouth in Kenya. Africa’s largest crocodile, they reach a maximum size of about 20 feet (6,1 m) and can weigh up to 730 kg. They live throughout sub-Saharan Africa, the Nile Basin, and Madagascar in rivers, freshwater marshes, and mangrove swamps. (Photo by Anup Shah/Alamy Stock Photo/Nature Picture Library) 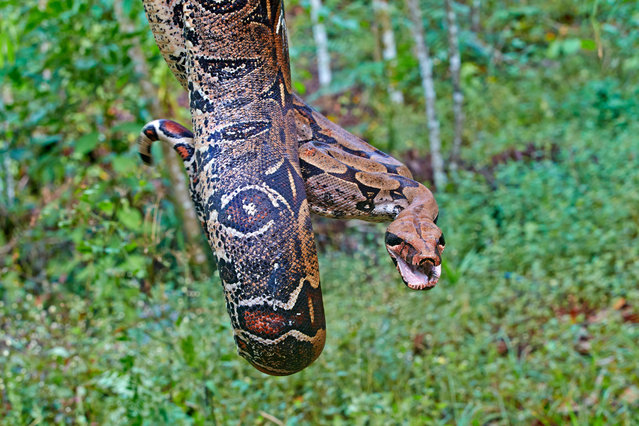 A boa constrictor in the Amazon river basin in Brazil. They are nonpoisonous constrictors found in tropical central and south America. Like their anaconda cousins, they are excellent swimmers, but prefer to stay on dry land, living primarily in hollow logs and abandoned mammal burrows. (Photo by Sylvain Cordier/Biosphoto/Alamy Stock Photo)
Edit Del
06 May 2016 13:15:00, post received 0 comments
Publication archive:
←   →
Popular tags:
All tags
Last searches: