Sad Police At Work. Part I 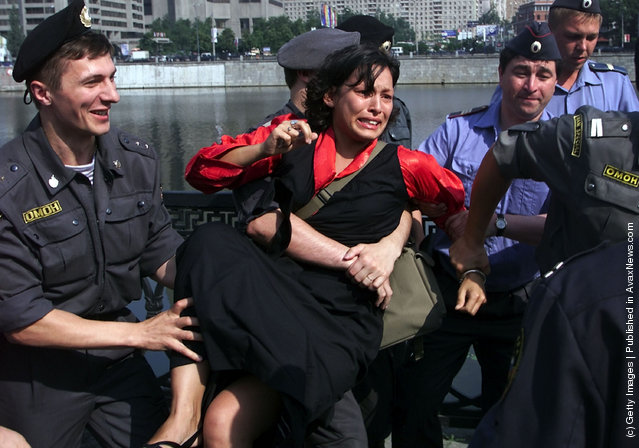 Yangzom Brauen, center, leader of a protest of about 10 Tibetan demonstrators is carried away by Russian riot police July 11, 2001 in Moscow, Russia. Brauen was demonstrating against the bid by China's capital of Beijing to be the host of the 2008 Summer Olympic Games. (Photo by Getty Images) 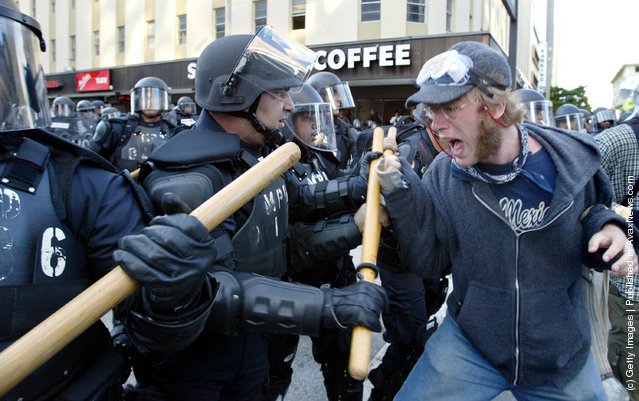 Anti globalization protesters clash with police in riot gear November 20, 2003 on the fourth day of the summit to create a Free Trade Area of the Americas (FTAA) being held in Miami, Florida. Hundreds of protesters, including groups of anarchists, clashed with the police throughout the morning as the protesters unsuccessfully tried to make their way to the summit building. (Photo by Spencer Platt/Getty Images) 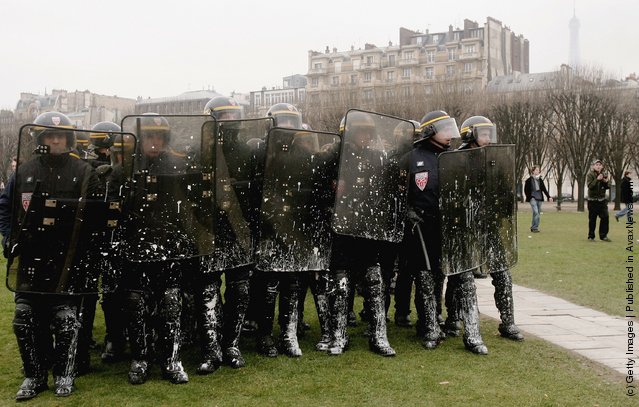 Riot Police Officers stand in line after a march against the Youth Employment Contract on March 23, 2006 in Invalides square in Paris, France. Students are protesting a change in the French labour laws that would make it easier to fire younger workers. (Photo by Pascal Le Segretain/Getty Images) 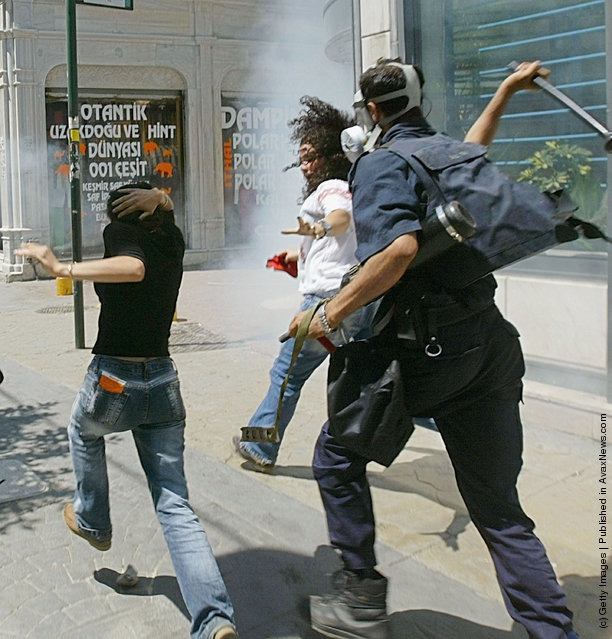 Demonstrators run away as police clash with Anti-NATO protesters in Istanbul on June 29, 2004. Turkish riot police broke up the protest against the NATO summit and the presence of U.S President George W. Bush, using pepper gas and truncheons against the demonstrators. (Photo by Milos Bicanski/Getty images) 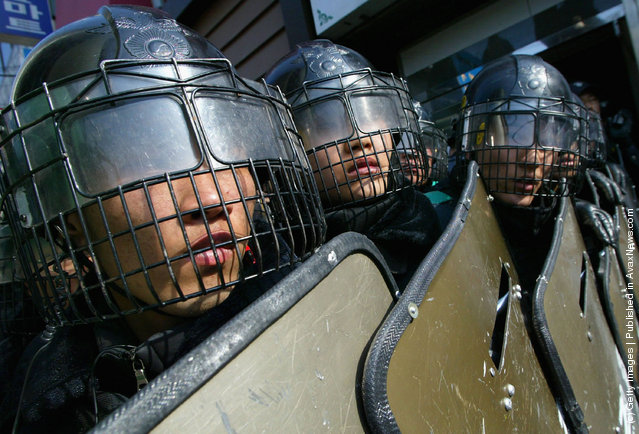 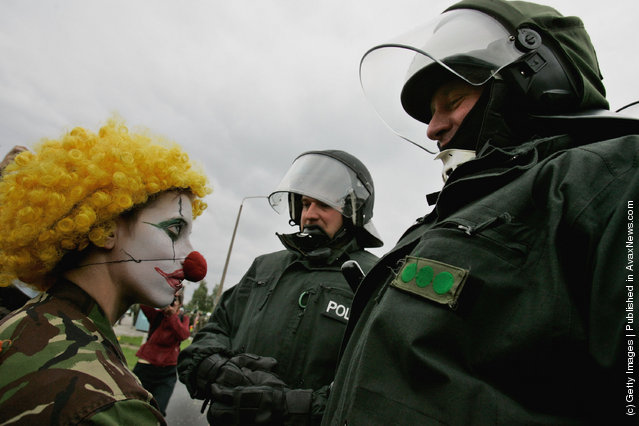 A demonstrator dressed up as a clown talks to riot police during a protest against the migration policies of the G8 states and racism in general on June 4, 2007 in Rostock, Germany. (Photo by Ralph Orlowski/Getty Images) 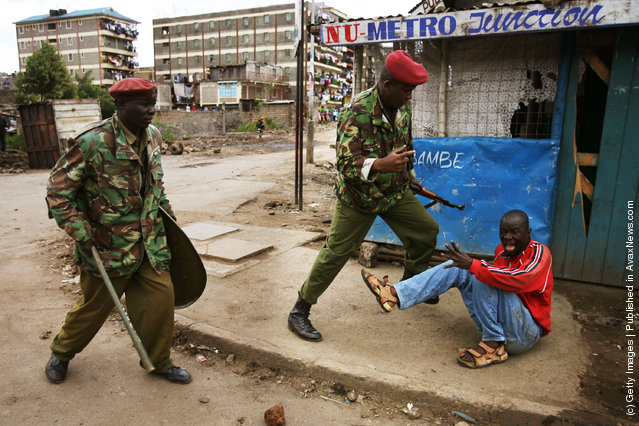 A Kenyan man is confronted by Kenyan police during clashes in the Mathare slums January 17, 2008 in Nairobi, Kenya. (Photo by Uriel Sinai/Getty Images) 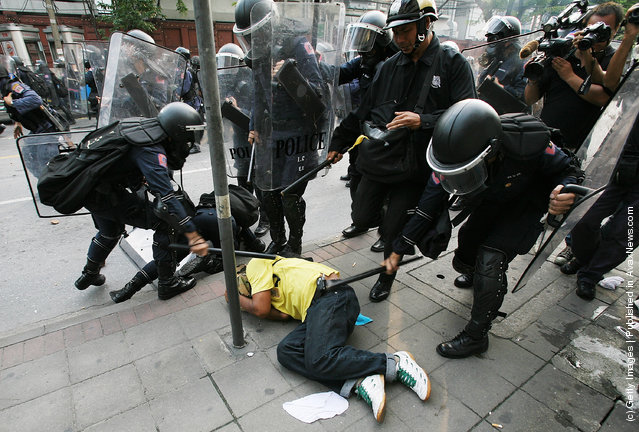 Riot polices beat an anti-government protester outside The Parliament House on October 7, 2008, in Bangkok, Thailand. The violence began when police moved in firing teargas rounds to clear protesters from the streets outside parliament to allow politicians a means to exit. (Photo by Chumsak Kanoknan/Getty Images) 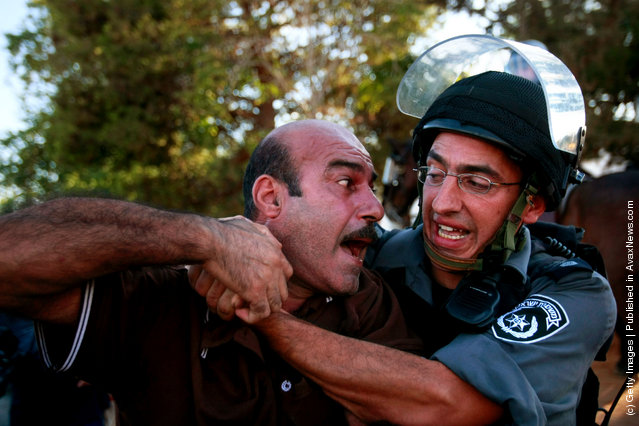 Israelis clash with riot police preventing them from approaching an Arab home October 10, 2008 in Acre, Israel. Riots broke out between Jewish and Arab residents on Yom Kippur after an Arab man was attacked while driving through the predominantly Jewish city. (Photo by Uriel Sinai/Getty Images) 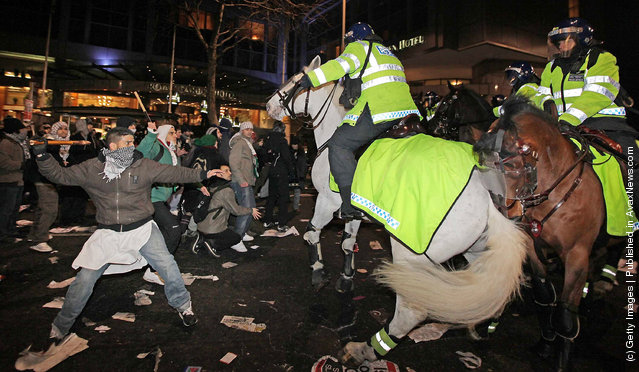 Protestors clash with mounted riot police outside the Israeli embassy on January 10, 2009 in London. (Photo by Peter Macdiarmid/Getty Images) 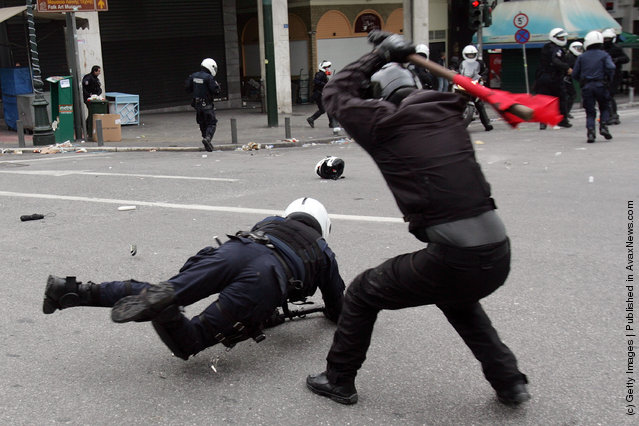 Greek youths clash with riot police during a demonstration commemorating the fatal shooting of 15-year-old Alexandros Grigoropoulos' by police a year ago, on December 6, 2009 in central Athens, Greece. (Photo by Milos Bicanski/Getty Images) 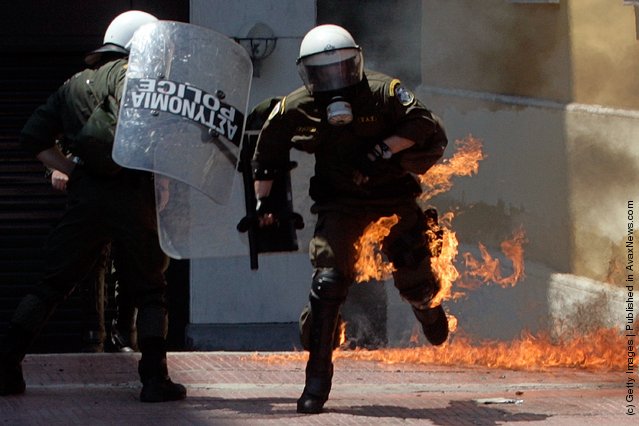 A protester uses molotov cocktails against riot police during May Day protests on May 1, 2010 in Athens, Greece. (Photo by Milos Bicanski /Getty Images) 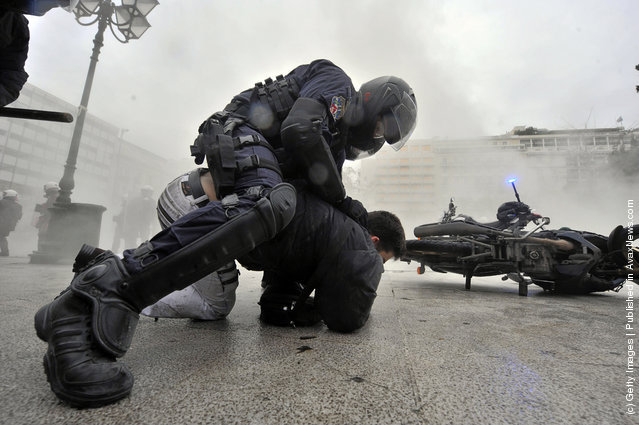 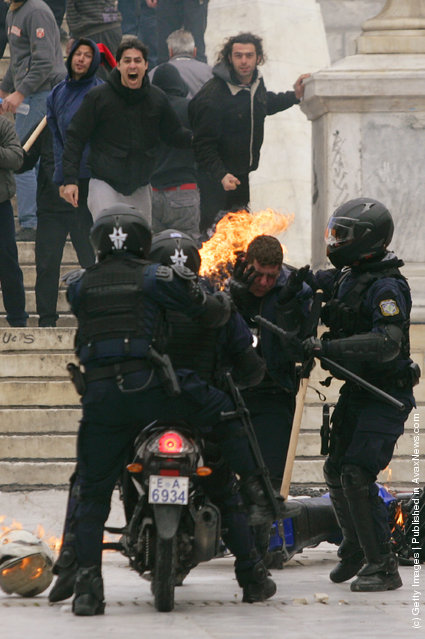 A police officer is helped from his motorcycle after being hit by a petrol bomb as police in full riot gear clash with protesters in front of parliament in on February 23,2011 in Athens, Greece. Greek police clashed with protesters as workers marched on parliament protesting against austerity measures introduced to help the country manage it's huge national debt. (Photo by Milos Bicanski/ Getty Images)
Edit Del
16 Jun 2011 11:02:00, post received 0 comments
Publication archive:
←   →
Popular tags:
All tags
Last searches: