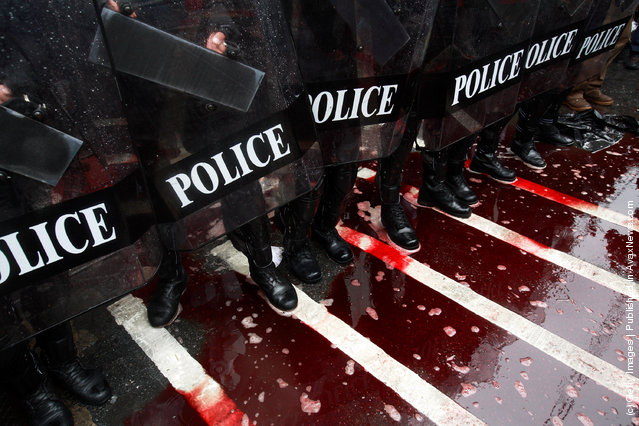 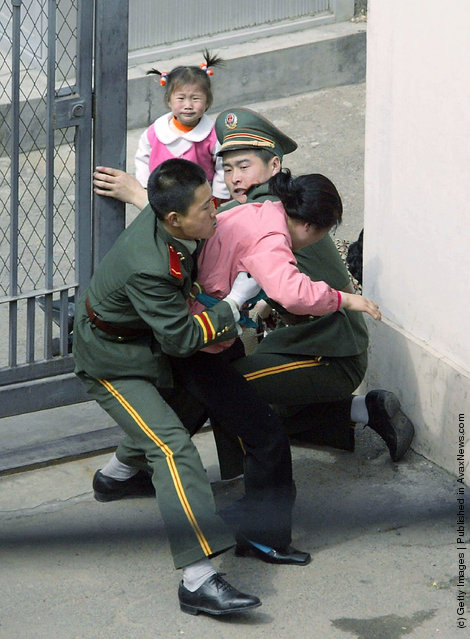 Chinese policemen block a North Korean woman trying to enter the Japanese consulate May 8, 2002 in Shenyang, northeastern China as a child, presumably her daughter, looks on. The woman and four others were seeking political asylum. (Photo by Kyodo/Getty Images) 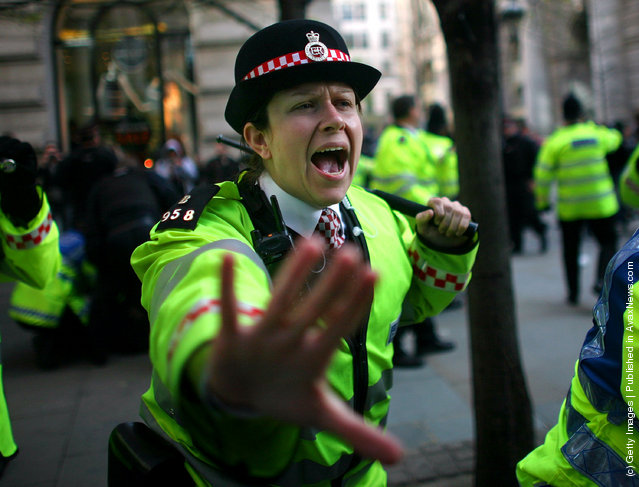 A police woman shouts at protesters during a clash in Threadneedle St in London's financial district, as global leaders attend the G20 Summit on April 2, 2009 in London, England. (Photo by Christopher Furlong/Getty Images) 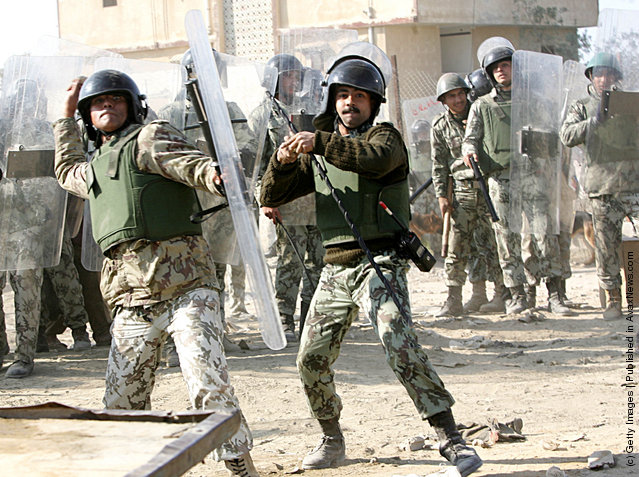 Egyptain riot policemen throw stones as they attempt to prevent Palestinian people from crossing the border January 25, 2008 between Rafah and Egypt southern Gaza Strip. Clashes started between Egyptian riot police and Palestinians when Egypt began closing its breached border with the Gaza Strip, using barbed wire and water cannons to keep Palestinians from leaving the Hamas-controlled territory in defiance of an Israeli blockade. (Photo by Abid Katib/Getty Images) 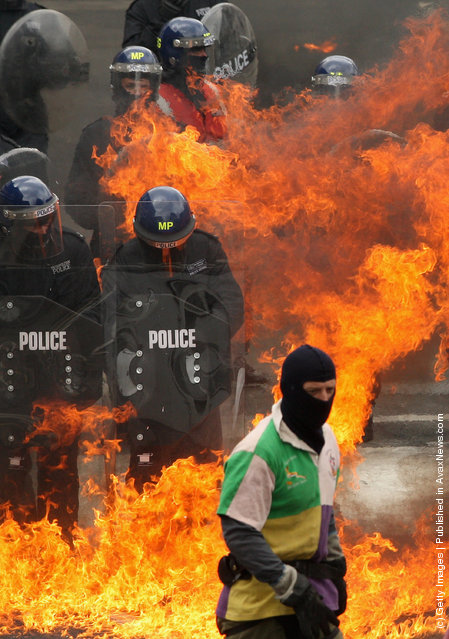 Riot Police of the Terratorial Support Group at the Metropolitan Police Specialist Training Centre put on a public order demonstration during a visit by Prince Charles, Prince of Wales on June 9, 2009 in Gravesend, England. (Photo by Chris Jackson/Pool/Getty Images) 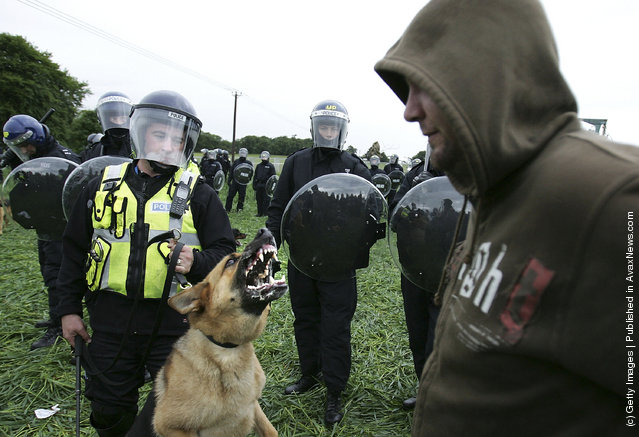 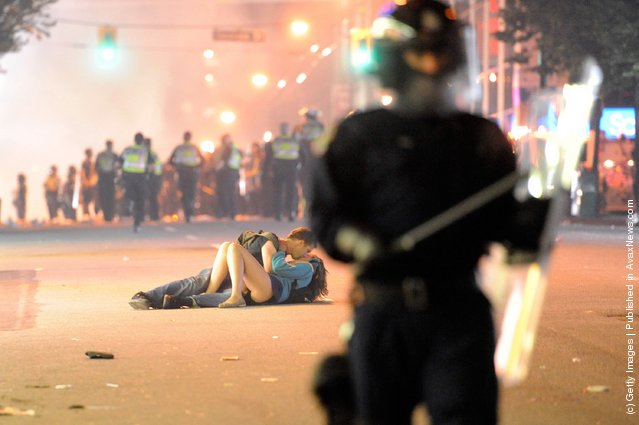 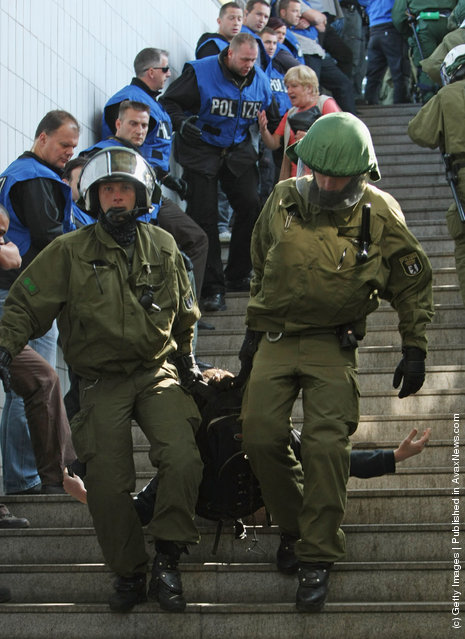 Riot police forcibly remove protesters trying to blockade the commuter train station in the district of Koepenick against the arrival of neo-Nazis on May 1, 2009 in Berlin, Germany. The German radical right-wing political party, the NPD, was having a May Day celebration nearby, and hundreds of preotsers arrived to demonstrate. Over 5,000 police officers are in Berlin to maintain order during the myriad of May 1, Workers Day, demonstrations that in years past have traditionally led to street battles between drunken demonstrators and police. (Photo by Sean Gallup/Getty Images) 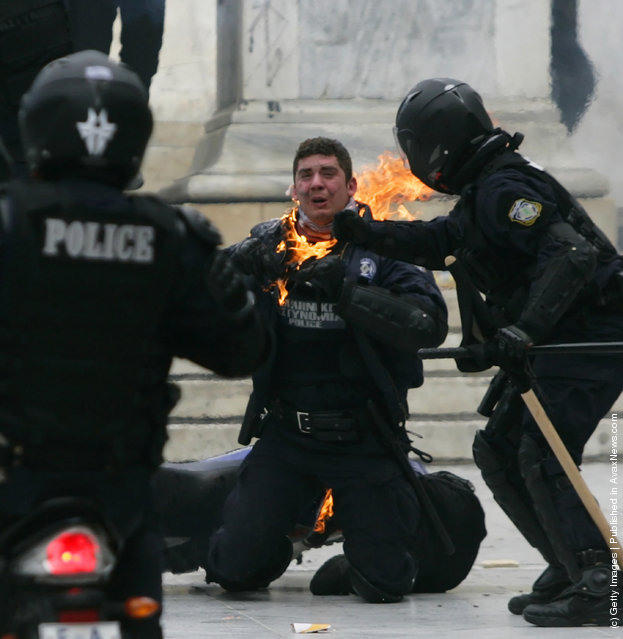 A police officer is helped from his motorcycle after being hit by a petrol bomb as police in full riot gear clash with protesters in front of parliament in on February 23,2011 in Athens, Greece. Greek police clashed with protesters as workers marched on parliament protesting against austerity measures introduced to help the country manage it's huge national debt. (Photo by Milos Bicanski/ Getty Images) 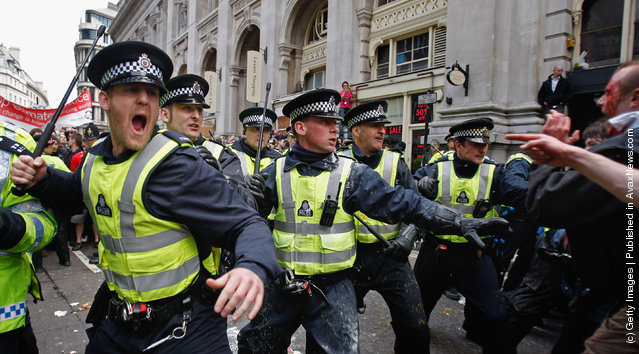 Police react to protesters as they block access to a branch of RBS stopping anti capitalist and climate change activists demonstrating in the City of London on April 1, 2009 in London, England. Protesters marched through London demanding action on poverty, climate change and jobs, as world leaders arrived in London ahead of the G20 summit. (Photo by Jeff J Mitchell/Getty Images) 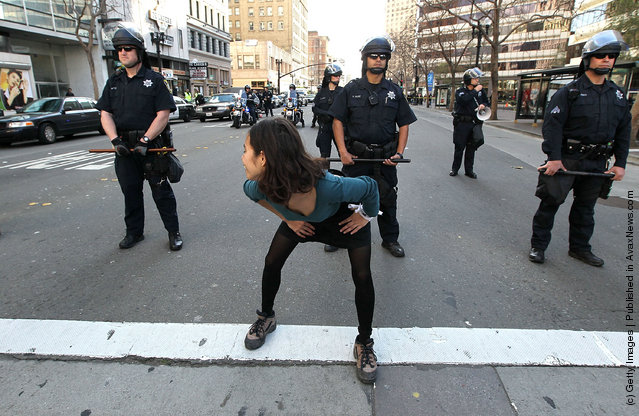 A demonstrator dances in front of Oakland police officers in riot gear as they monitor demonstrators during a national day of action against school funding cuts and tuition increases March 4, 2010 in Oakland, California. (Photo by Justin Sullivan/Getty Images) 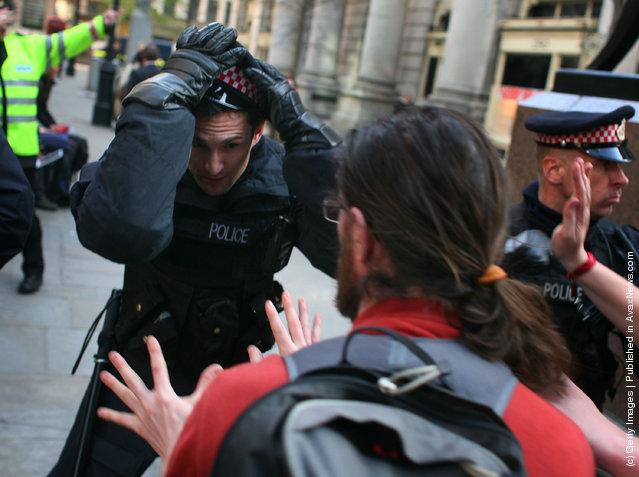 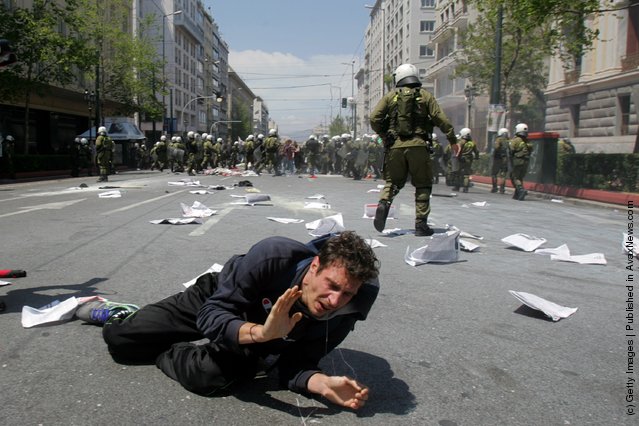 A protestor falls to the ground after clashes erupted during a general strike that halted services and disrupted flights May 11, 2011 in Athens, Greece. (Photo by Milos Bicanski/Getty Images) 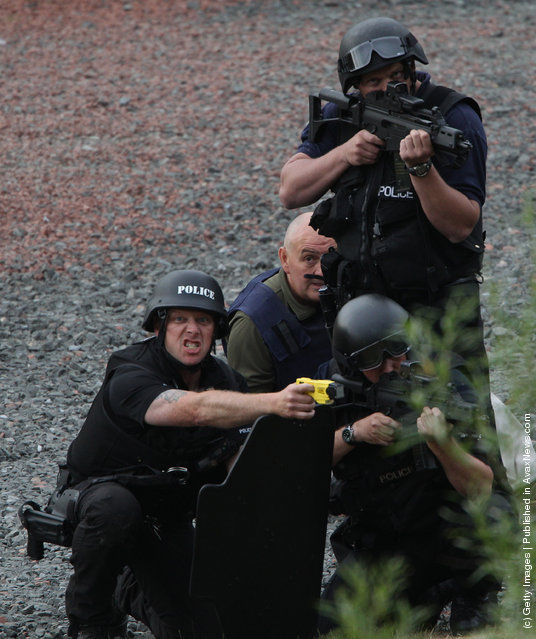 Police negotiate with a man fitting the description of fugitive gunman Raoul Moat on July 9, 2010 in Rothbury, England. Police are negotiating with a man that is believed to be fugitive gunman Raoul Moat in the village of Rothbury after being on the run from police for allegedly shooting three people, one fatally. (Photo by Dan Kitwood/Getty Images) 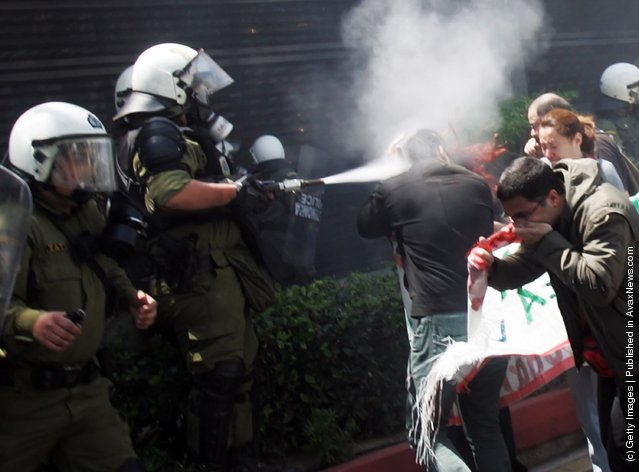 A police officer in full riot gear sprays tear gas at a protestor's head after clashes erupted during a general strike that halted services and disrupted flights May 11, 2011 in Athens, Greece. (Photo by Milos Bicanski/Getty Images) 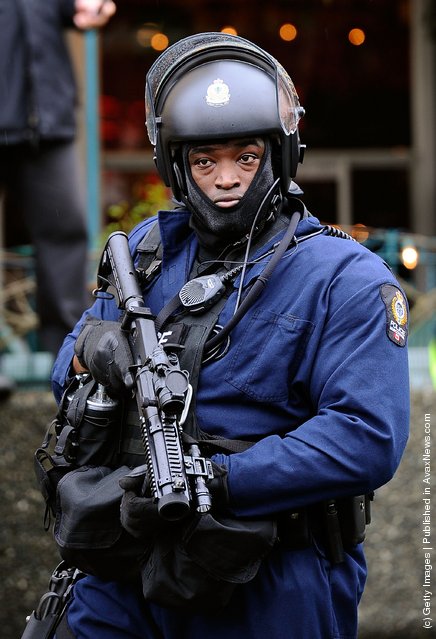 A Vancouver Police offficer in full riot gear watches a group of deomonstraters during a protest against the Vancouver 2010 Winter Olympics on February 13, 2010 in Vancouver, Canada. (Photo by Kevork Djansezian/Getty Images)