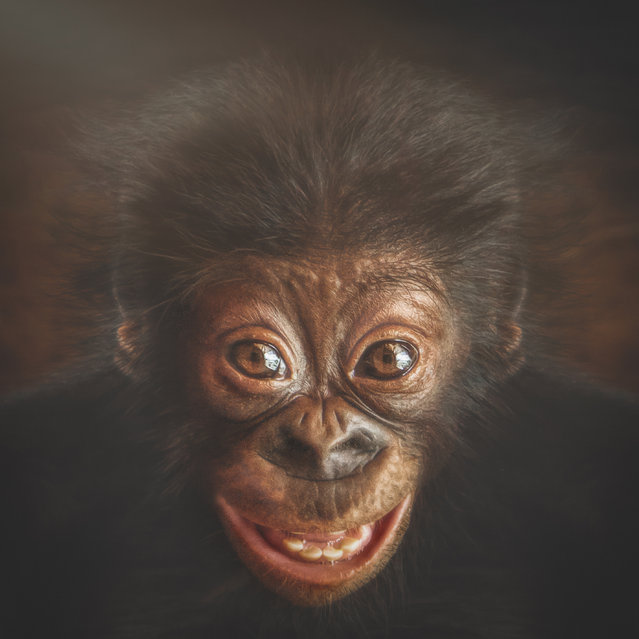 These portraits reveal the incredibly humanlike expressions of a variety of apes.Through piercing eyes and finite facial details, the intimate photographs show the animals looking angry, sad, delighted and pensive. They are the works of Manuela Kulpa – an IT consultant and keen photographer from near Cologne, Germany – who shot the apes predominantly at zoos across Austria, Belgium, the Czech Republic, Germany and the Netherlands. Here: Bonobo, Azibo. (Photo by Manuela Kulpa/Caters News)
Details
26 Feb 2016 10:04:00,post received 0 comments
Fact AP Photographer Rodrigo Abd 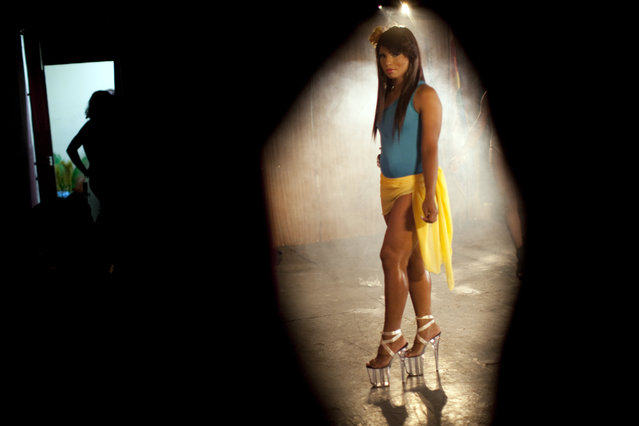 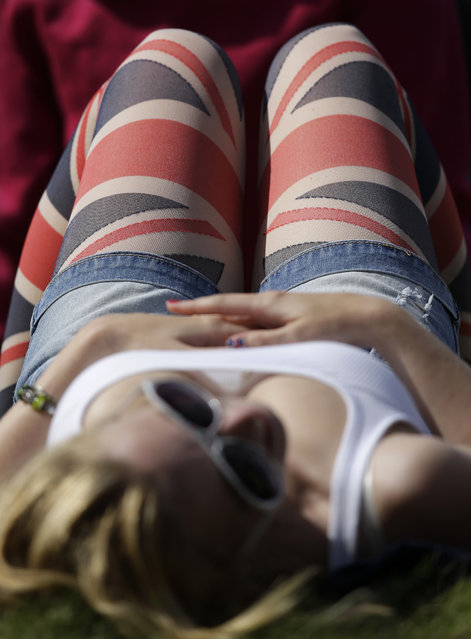 “Natacha Pisarenko was born in Buenos Aires and studied photography at that city’s School of Photographic Arts. Pisarenko currently works out of Buenos Aires, Argentina. She started her career in 1988 as a photographer for La Nación, one of Argentina’s largest newspapers, then joined the AP in Buenos Aires in 2002”. – Associated Press. Photo: A fan wearing leggings marked with the stripes of Great Britain's flag rests on the grass at the rowing venue in Eton Dorney, near Windsor, England, at the 2012 Summer Olympics, Monday, July 30, 2012. (Photo by Natacha Pisarenko/AP Photo)
Details
25 May 2014 13:11:00,post received 0 comments
Fact AP Photographer Hatem Moussa 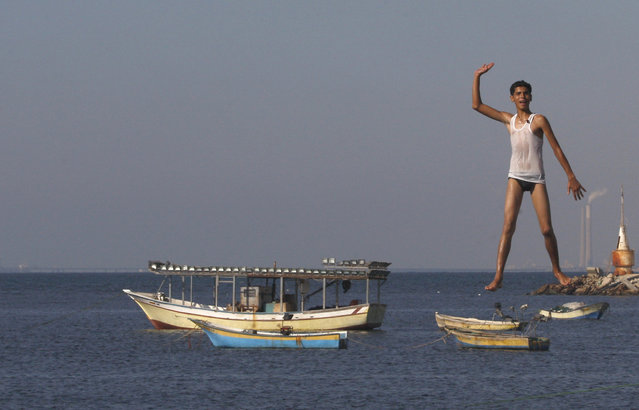 “Hatem Moussa joined The Associated Press as a photojournalist in 1998. Since then, the Gaza City-based Moussa has covered repeated rounds of Israeli-Palestinian fighting in Gaza, including the wars of 2008-9, 2012 and 2014”. – Associated Press. Photo: A Palestinian youth jumps into the Mediterranean sea on the beach at the port of Gaza City, Gaza, Monday, August 27, 2012. (Photo by Hatem Moussa/AP Photo)
Details
19 Aug 2014 10:20:00,post received 0 comments
Fact AP Photographer Manu Brabo 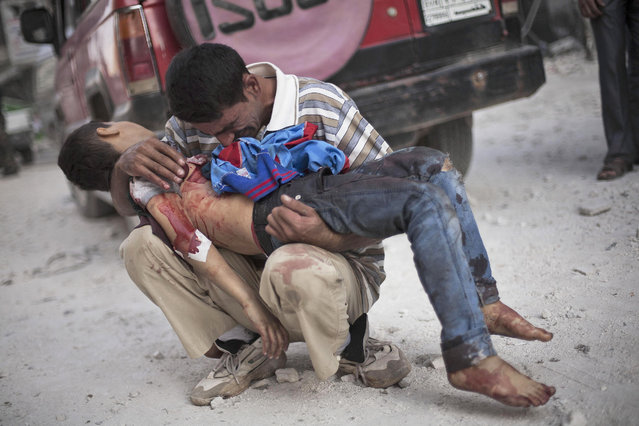 Manu Brabo was born in Spain in 1981. After studying Photography in The School of Arts and Crafts in Oviedo, he moved to Madrid where he started Journalism in Carlos III University while he was working as a photographer for several humble newspapers and agencies. In 2011, Manu was held captive and then released by by Libyan forces. Brabo, along with fellow AP photographers were awarded the 2013 Pulitzer Prize for Breaking News Photography. Here: a Syrian man cries while holding the body of his son, killed by the Syrian Army, near Dar El Shifa hospital in Aleppo, Syria, Wednesday, October 3, 2012. (Photo by Manu Brabo/AP Photo)
Details
27 Oct 2015 08:04:00,post received 0 comments
Fact AP Photographer David Guttenfelder 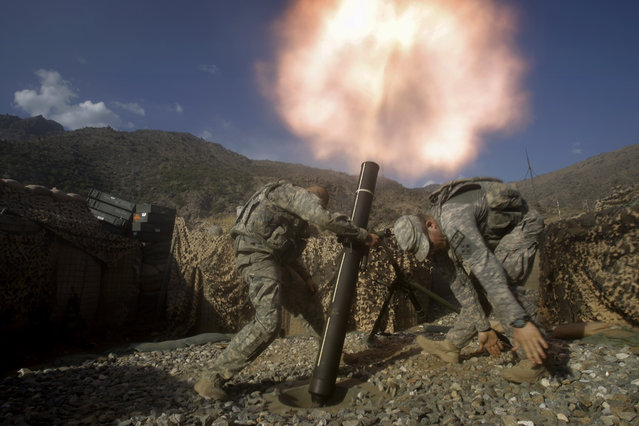 David Guttenfelder was born in Iowa and graduated from the University of Iowa with a Bachelor of Arts in cultural anthropology. He has worked for the AP since 1994 based in Kenya, the Ivory Coast, India and Japan. He is currently AP’s chief Asia photographer and his feature work has been used prominently in editorial publications throughout the world including Time and National Geographic. Photo: U.S. soldiers from the 2nd Battalion, 12th Infantry Regiment, 4th Brigade Combat Team, fire mortars at known enemy firing positions from a base in the Pech River Valley in Afghanistan's Kunar province, Saturday, October 24, 2009. (Photo by David Guttenfelder/AP Photo)
Details
21 Apr 2014 10:11:00,post received 0 comments
Fact AP Photographer Rebecca Blackwell

Onlookers gather around a struggling beached whale in the Yoff neighborhood of Dakar, Senegal Wednesday, May 21, 2008. Residents worked Wednesday morning to save some of the more than 80 whales that were stranded on the beach Tuesday night. This whale was successfully towed out to sea by a fishing boat, though at least 20 others lay dead on the beach by midday Wednesday. (Photo by Rebecca Blackwell/AP Photo)
Details
26 Oct 2014 12:08:00,post received 0 comments
Fact AP Photographer Gerald Herbert 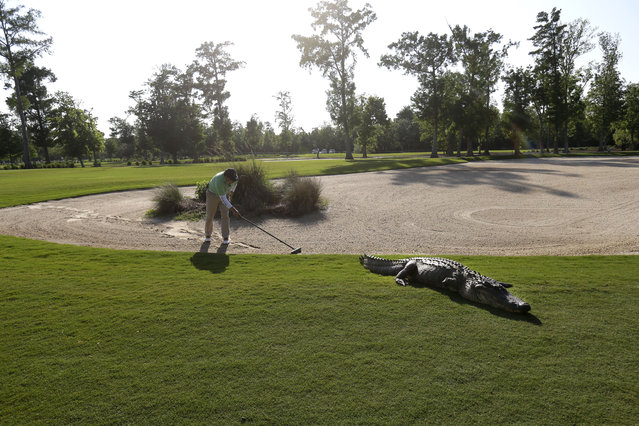 Gerald Herbert is a staff photographer for the AP based in New Orleans, Louisiana. Before that he was a staff photographer for the Washington Times, the New York Daily News and a freelancer for the AP in New Orleans, Boston and New York. Photo: A worker grooms away tracks after an alligator crossed through a sand trap on the 14th hole during the first round of the PGA Tour Zurich Classic golf tournament at TPC Louisiana in Avondale, La., Thursday, April 25, 2013. (Photo by Gerald Herbert/AP Photo)
Details
23 Apr 2014 10:41:00,post received 0 comments
Popular tags:
All tags
Last searches: