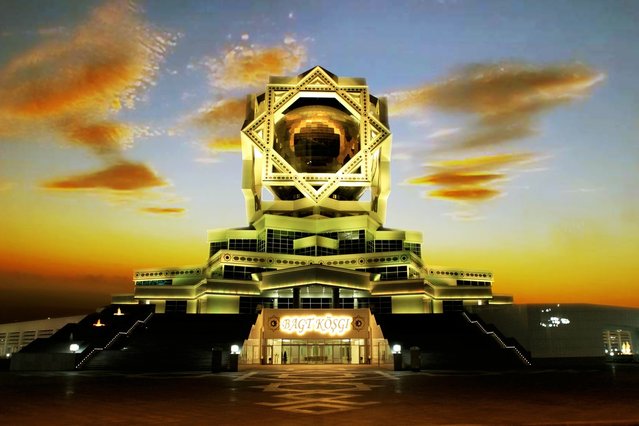 The "Wedding Palace" (Bagt Kosgi) is located in the southwest of Ashgabat. while the building was designed in a sphere shape surrounded by the eight-corner "Oguzkhan Star" on the corners of the building. There is a map of Turkmenistan on the outer space of the sphere whose radius is 32 meters and it can be seen from far away as the sun reflects off it.
Details
18 May 2014 16:37:00,post received 0 comments
Touching The City of White Marble: Ashgabat, Turkmenistan 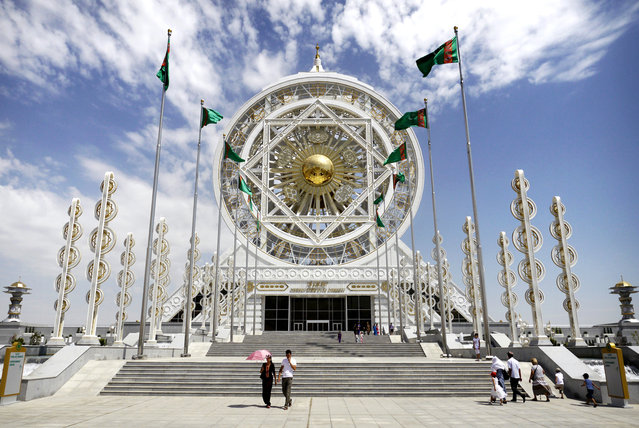 Travel photographer Amos Chapple recently crossed into Turkmenistan on a three-day transit visa and was able to photograph many of the sights and monuments in Ashgabat, the capital and largest city. Turkmenistan is a single-party country, a former Soviet state, run by a president at the center of a cult of personality.

Photo: A young couple leave the Alem Entertainment Center in Ashgabat. The current president has a history of breaking obscure records. In 2012 the wheel atop this complex was entered into the Guinness Book of World Records as the world's largest enclosed Ferris wheel. The structure was built at a cost of $90m. (Photo by Amos Chapple via The Atlantic)
Details
09 Jun 2013 07:24:00,post received 0 comments
Publication archive:
←   →
Popular tags:
All tags
Last searches: