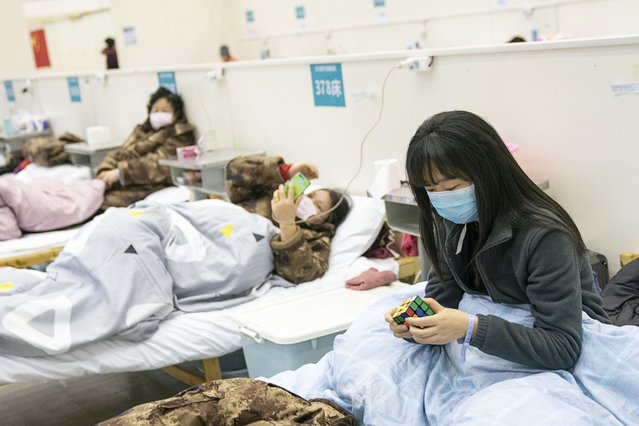 A patient solves a rubik's cube at a temporary hospital converted from “Wuhan Livingroom” in central China's Hubei Province on February 10, 2020. In face of the outbreak of the novel coronavirus pneumonia epidemic, Wuhan authorities have transformed public venues such as exhibition centers and gymnasiums into temporary hospitals. The hospitals have a large capacity of treating patients with mild symptoms and play an important role in isolating the source of infection and cutting off the routes of infection during epidemic prevention. The first batch of patients was hospitalized on Feb. 5. (Photo by Chine Nouvelle/SIPA Press/Rex Features/Shutterstock)
Details
17 Feb 2020 00:07:00,post received 0 comments
Fact News from China, Part 2/2 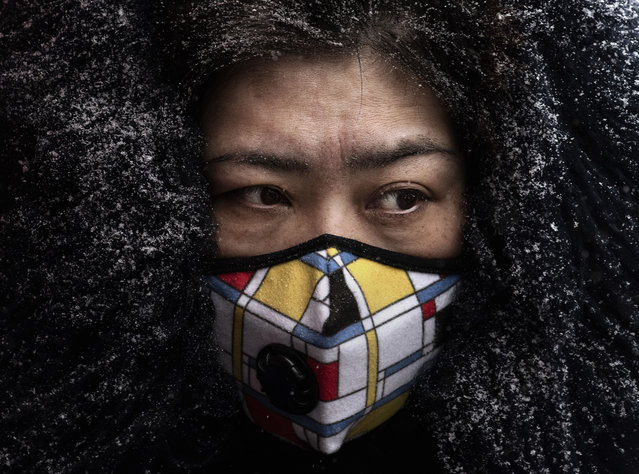 A Chinese woman wears a protective mask as she shops in a market on February 6, 2020 in Beijing, China. The number of cases of a deadly new coronavirus rose to more than 28000 in mainland China Thursday, days after the World Health Organization (WHO) declared the outbreak a global public health emergency. (Photo by Kevin Frayer/Getty Images)
Details
09 Feb 2020 00:07:00,post received 0 comments
Fact News from China, Part 1/2 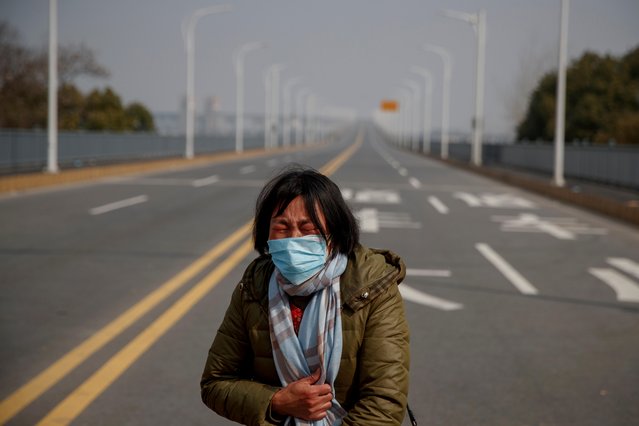 A mother reacts as she pleads with police to allow her daughter to pass a checkpoint for cancer treatment after she arrived from Hubei province at the Jiujiang Yangtze River Bridge in Jiujiang, China, February 1, 2020. (Photo by Thomas Peter/Reuters)
Details
08 Feb 2020 00:03:00,post received 0 comments
Fact News from China, Part 2/2 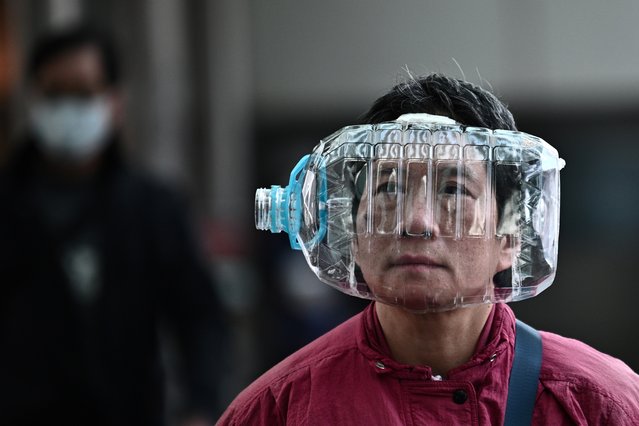 A local wears a plastic water bottle with a cutout to cover her face, as she walks on a footbridge in Hong Kong on January 31, 2020, as a preventative measure following a virus outbreak which began in the Chinese city of Wuhan. The World Health Organization, which initially downplayed the severity of a disease that has now killed 170 nationwide, warned all governments to be “on alert” as it weighed whether to declare a global health emergency. (Photo by Anthony Wallace/AFP Photo)
Details
03 Feb 2020 00:03:00,post received 0 comments
Fact News from China, Part 1/2 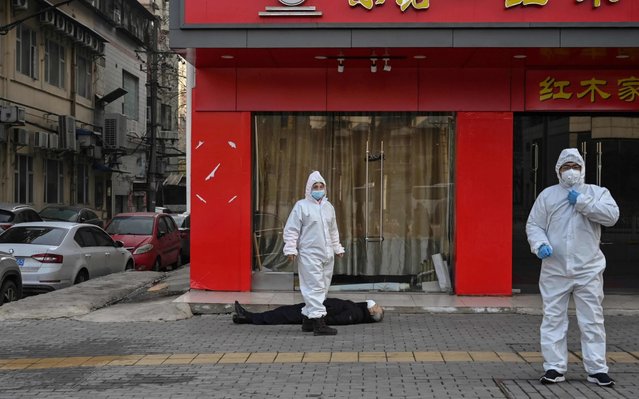 This photo taken on January 30, 2020 shows officials in protective suits checking on an elderly man wearing a facemask who collapsed and died on a street near a hospital in Wuhan. AFP journalists saw the body on January 30, not long before an emergency vehicle arrived carrying police and medical staff in full-body protective suits. The World Health Organization declared a global emergency over the new coronavirus, as China reported on January 31 the death toll had climbed to 213 with nearly 10,000 infections. (Photo by Hector Retamal/AFP Photo)
Details
02 Feb 2020 00:07:00,post received 0 comments
Fact A Look at Life in China 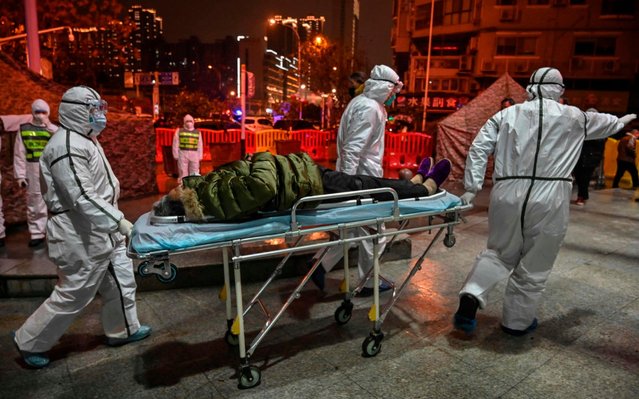 Medical staff members wearing protective clothing to help stop the spread of a deadly virus which began in the city, arrive with a patient at the Wuhan Red Cross Hospital in Wuhan on January 25, 2020. The Chinese army deployed medical specialists on January 25 to the epicentre of a spiralling viral outbreak that has killed 41 people and spread around the world, as millions spent their normally festive Lunar New Year holiday under lockdown. (Photo by Hector Retamal/AFP Photo)
Details
30 Jan 2020 00:05:00,post received 0 comments
Fact A Look at Life in China: Coronavirus Panic 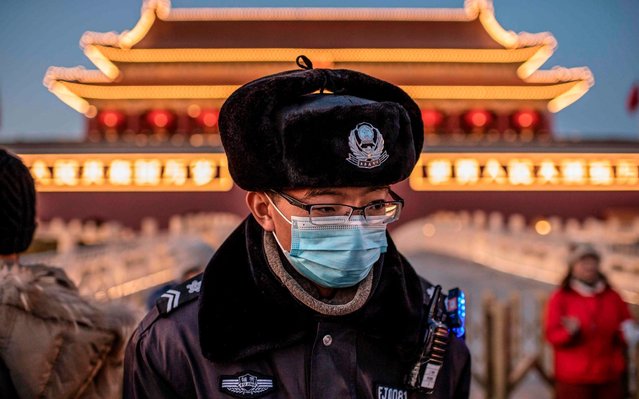 A police officer wearing a protective mask walks past the portrait of late communist leader Mao Zedong (not pictured) at Tiananmen Gate in Beijing on January 23, 2020. Large-scale Lunar New Year events in Beijing have been cancelled as part of national efforts to control the spread of a new SARS-like virus, city authorities announced on January 23. (Photo by Nicolas Asfouri/AFP Photo)
Details
25 Jan 2020 00:03:00,post received 0 comments
Fact A Look at Life in China 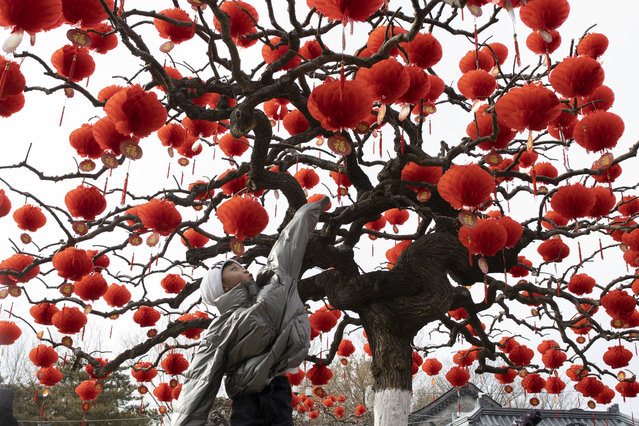 A child jumps to touch lanterns hung on a tree ahead of the Chinese Lunar New Year celebrations in Beijing on Thursday, January 16, 2020. The world's largest annual migration begins this week in China with millions of Chinese traveling to their hometowns to celebrate the Lunar New Year on Jan. 25 this year which marks the Year of the Rat on the Chinese zodiac. (Photo by Ng Han Guan/AP Photo)
Details
22 Jan 2020 00:01:00,post received 0 comments
Publication archive:
←   →
Popular tags:
All tags
Last searches: