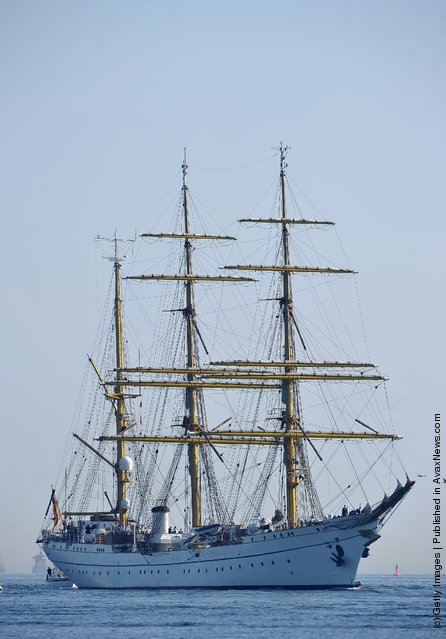 “The Gorch Fock is a tall ship of the German Navy (Deutsche Marine). She is the second ship of that name and a sister ship of the Gorch Fock built in 1933. Both ships are named in honor of the German writer Johann Kinau who wrote under the pseudonym "Gorch Fock" and died in the battle of Jutland/Skagerrak in 1916. The modern-day Gorch Fock was built in 1958 and has since then undertaken 146 cruises (as of October 2006), including one tour around the world in 1988. She is sometimes referred to (unofficially) as the Gorch Fock II to distinguish her from her older sister ship”. – Wikipedia

Photo: The “Gorch Fock” German Navy tall ship sails towards Kiel on May 6, 2011 in Kiel, Germany. The ship returns to Germany following investigations in January while it was in port in Ushuia, Argentina, into allegations of attempted mutiny following the death of a female crew member. German Defense Minister at the time Karl-Theodor zu Guttenberg suspended Captain Norbert Schatz, and though investigators absolved Schatz of wrongdoing, critics charge the investigation was inadequate. The "Gorch Fock" is the German Navy's flagship training vessel. (Photo by Stuart Franklin/Getty Images)
Details
06 May 2011 11:38:00,post received 0 comments
Publication archive:
←   →
Popular tags:
All tags
Last searches: