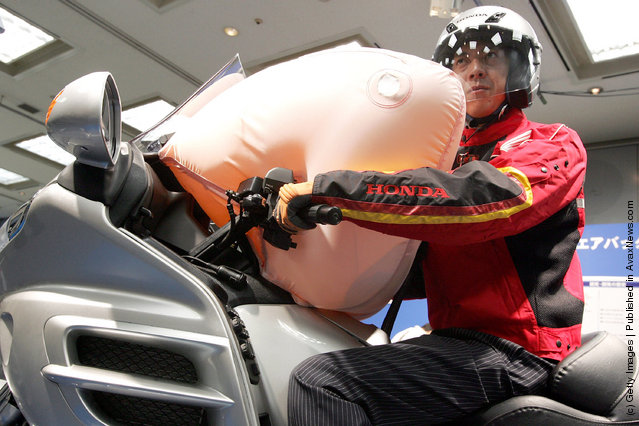 “The technology was designed to address the risk associated with head-on or nearly head-on motorcycle collisions, which account for a large percentage of motorcycle crashes. The airbag was designed to deploy during a severe frontal collision in which a rider could be thrown forward from the motorcycle. Once deployed, the airbag stands upright in front of the rider to help absorb the rider’s kinetic energy prior to leaving the motorcycle”. – Ohio.Honda.com

Photo: Honda Motor Co., Ltd.'s world's first production motorcycle airbag system is introduced at a press conference at Honda's HQ on September 8, 2005 in Tokyo, Japan. The motorcycle airbag system to be installed to lessen the injuries of the rider is comprised of the airbag module that include the airbag and the inflator, crash sensors that monitor acceleration changes and an ECU that performs calculation to determine when a collision is occuring. (Photo by Junko Kimura/Getty Images)
Details
20 Jun 2011 14:29:00,post received 0 comments
Publication archive:
←   →
Popular tags:
All tags
Last searches: