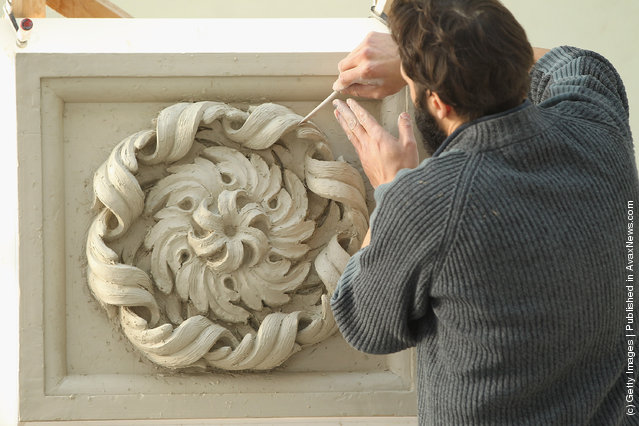 BERLIN, GERMANY - NOVEMBER 11: Sculptor Oleg Bessonov creates a rosette from clay at the Schlossbauhuette studio where a team of sculptors is creating decorative elements for the facade of the Berliner Schloss city palace on November 11, 2011 in Berlin, Germany. The Berliner Schloss was the residence of the Prussian Kaiser and was among the major architectural landmarks of Berlin until it was heavily damaged by Allied bombing in 1945. The communist authorities of East Berlin demolished the building in the 1950s, and today's Berlin government is pursuing an ambitious project to rebuild the palace according to a design by Italian architect Franco Stella, which will recreate the facade of the building but with a modern interior at a cost of approximately EUR 590 million. The Humboldt Forum, the foundation leading the project, has given the Schlossbauhuette sculptors the formidable task of recreating the hundreds of architectural elements that decorated the facade, and though some original pieces were saved, more often the sculptors have only old black and white photos as reference. (Photo by Sean Gallup/Getty Images)
Details
21 Nov 2011 11:22:00,post received 0 comments
Publication archive:
←   →
Popular tags:
All tags
Last searches: