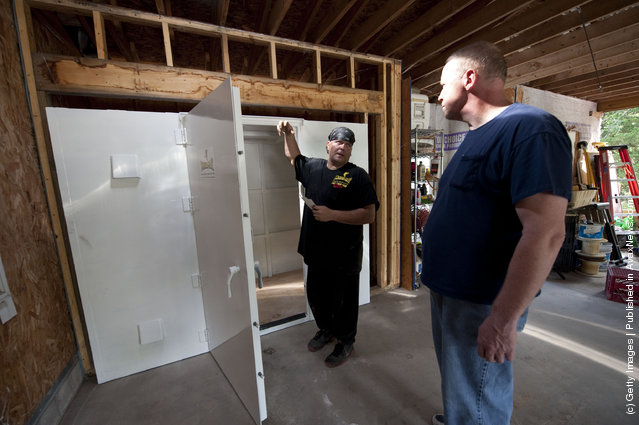 Jeremy Davis (L) demonstrates the operation of the safe room shelter door lock to homeowner Rob Hamlin on June 18, 2011 in Neosho, Missouri. Once thought of as a luxury item there has been a surge of interest from homeowners in purchasing shelters to ride out damaging storms ever since a F5 tornado tore through the town of Joplin, Missouri. Ranging in price from $3,000 to $5,000 homeowners can supplement the cost with a mortgage insurance program offered by the U.S. Department of Housing and Urban Development for installing a safe room built to FEMA specifications. Lawmakers in Alabama have even considered requiring construction of storm shelters in mobile home parks after forty people died in April. (Photo by Julie Denesha/Getty Images)
Details
19 Jun 2011 09:26:00,post received 0 comments
Publication archive:
←   →
Popular tags:
All tags
Last searches: