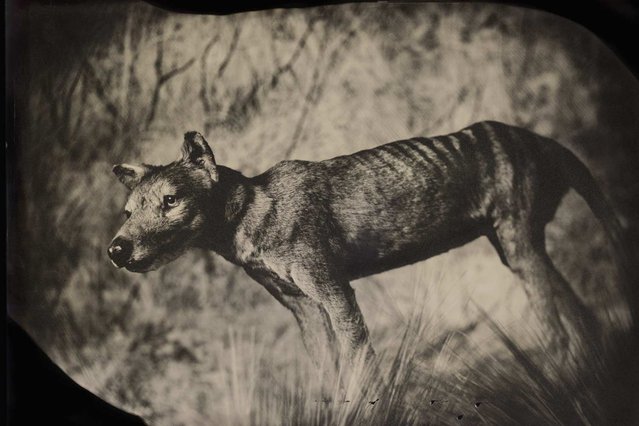 Should extinct species be brought back to life? That was the provocative question asked by the April cover story of National Geographic. As science now makes it possible to recover genetic material from animals that disappeared from the wild, bygone species like the passenger pigeon and the thylacine, a relative of the kangaroo, are candidates for rebirth. But should they be resurrected? Researchers and ethicists continue to debate the effects and wisdom of introducing yesterday’s species into today’s world. (Photo by Robb Kendrick/National Geographic) 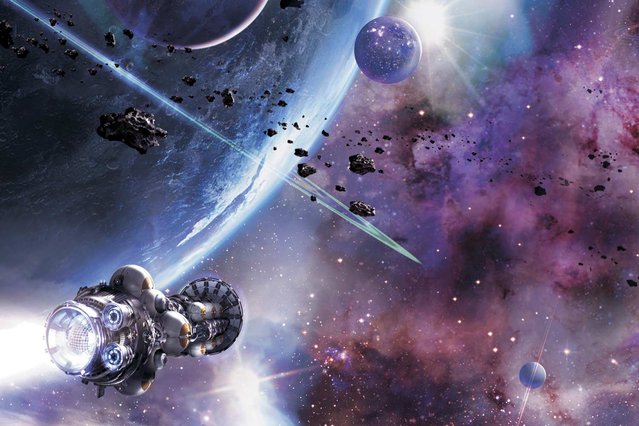 Will humans ever travel to the stars? Tim Folger considers the question in the January issue of National Geographic magazine, which kicked off our 125th anniversary year’s theme of exploration. “To get to the stars”, Folger writes, “we’ll need many new materials and engines but also a few of the old intangibles. They haven’t vanished. In fact … in the conversation of certain dreamer-nerds, especially outside NASA, you can now hear echoes of the old aspiration and adventurousness – of the old craziness for space”. That old craziness appears on the cover itself, where Stephan Martiniere’s art shows a 22nd-century dream: an unmanned probe powered by nuclear fusion exploring a new solar system, after traveling several decades from Earth at 100 million miles an hour. (Art by Stephan Martiniere/National Geographic) 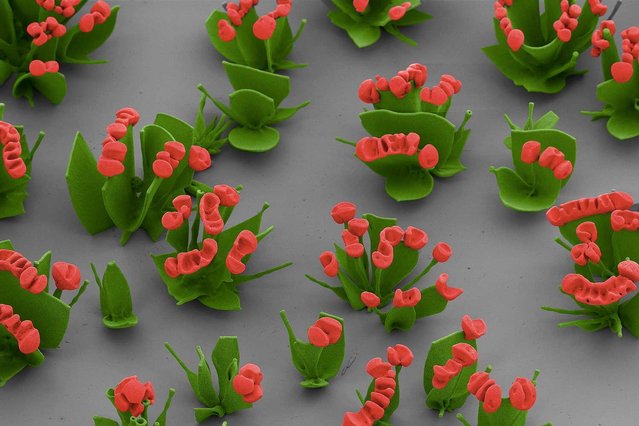 Building micro- and nano-particles is a growing field, especially to build ever smaller electronics. National Geographic Daily News reported on a team of Harvard researchers who are learning how to grow new structures in precise shapes and sizes using different combinations of chemicals. They usually start with flowers, which are easy shapes to make. Here, a field of green stems was decorated with thickened flowers. On another test, the scientists created a red rose that looks as though Dr. Seuss imagined it. (Photo by Wim Noorduin/National Geographic) 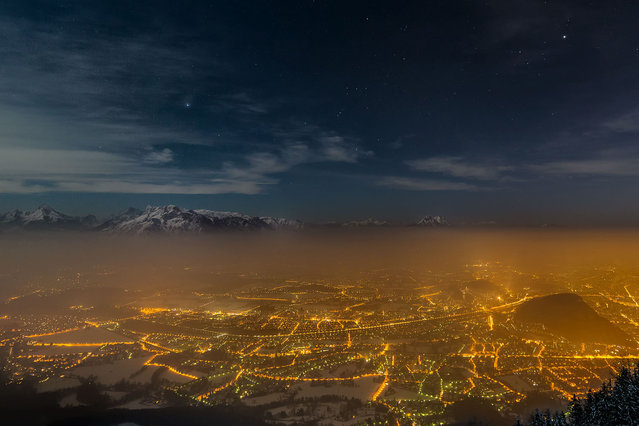 In this view of Salzburg, Austria, a blanket of cold fog filters out light from the city, allowing the stars above the surrounding mountain range to sparkle. And despite the glow of a near full moon, the wintertime constellations of Orion and Taurus, as well as the planet Jupiter, burn brightly. The photo, taken by Andreas Max Böckle, was a winner in the Fourth International Earth and Sky Photo Contest. It was published – along with a gallery of other winning shots – by National Geographic Daily News in May. (Photo by Andreas Max Böckle/National Geographic) 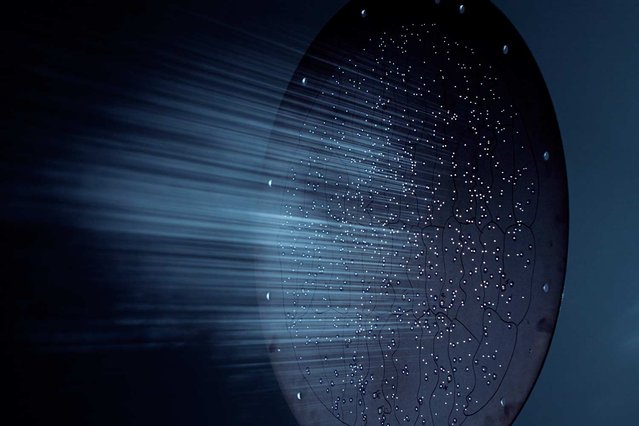 Our universe is expanding faster and faster as time ticks forward, and experts blame dark energy. A mysterious force that scientists struggle to find, dark energy makes up about 68 percent of the universe, according to NASA. One of the more recent efforts to pin down this maddeningly elusive part of the universe involves holes – lots and lots of holes. Researchers make perforations in metal plates the size of manhole covers that correspond to the locations of known galaxies. They then slide that plate in front of a telescope’s mirrors. The holes funnel the light from each galaxy into instruments that help scientists map the universe’s structure and motion, which they hope will lead them to dark energy. (Photo by Mark Thiessen/National Geographic) 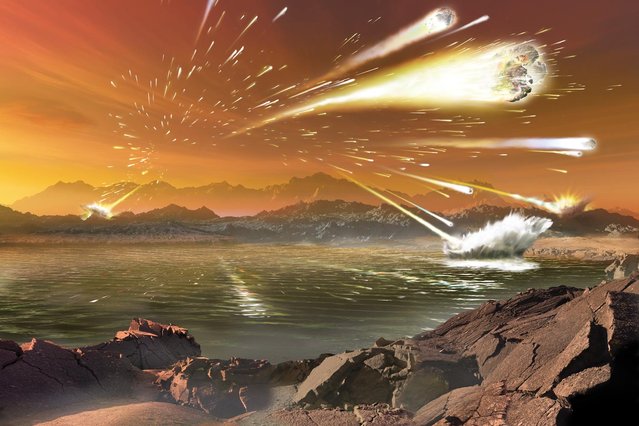 About 3.8 billion to 4 billion years ago, Earth suffered what scientists call the Late Heavy Bombardment, a mysterious rain of asteroids and comets that pummeled most of our planet’s surface. The moon was heavily cratered then too. This artwork, by Dana Berry, is part of an online interactive gallery that accompanied Robert Irion’s feature story, “Our Solar System”, in the July issue of National Geographic magazine. (Art by Dana Berry/National Geographic) 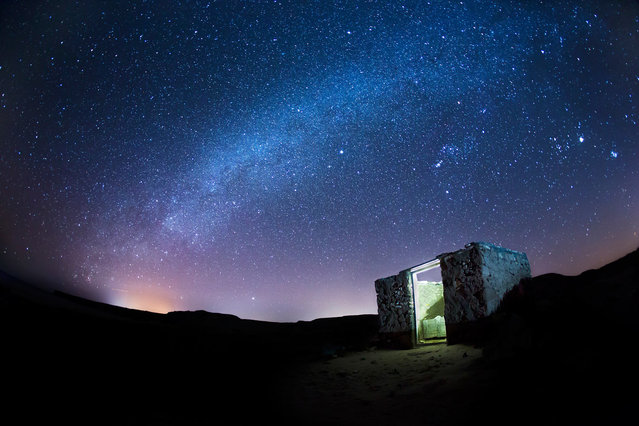 Back in September, we challenged the online Your Shot community with a question: What does the night mean to you? By way of an answer, we received 8,520 reader-submitted photos. Our editors selected 35 to publish, including this one – a view of the Milky Way above Oman, taken by Al-nahdi Mohammed. (Photo by Al-nahdi Mohammed/National Geographic) 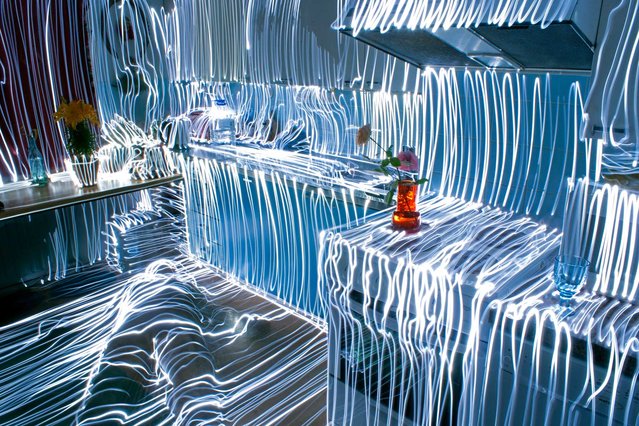 A kitchen in Finland appears charged with energy—actually lines of LED light scribbled by the photographer during a 24-minute exposure. The figure on the floor moved away after a short time, leaving only her electric outline. This image was published in April’s Visions of Earth, a trio of photos that appear in each issue of National Geographic. (Photo by Janne Parviainen/National Geographic) 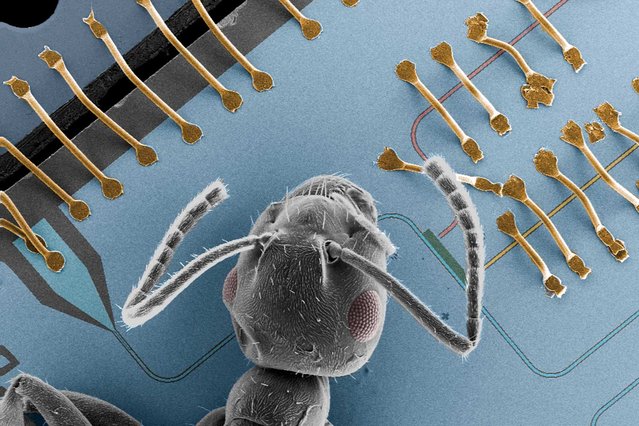 Teleportation happens only in science fiction and comic books, right? Wrong. This year two new research experiments have reliably shown that quantum bits of information – though still not people – can be moved by teleportation. As National Geographic Daily News reported in August, the breakthrough could lead to widespread applications in computing and cryptography. (Photo by Jonas Mlynek/ETH Zurich/National Geographic) 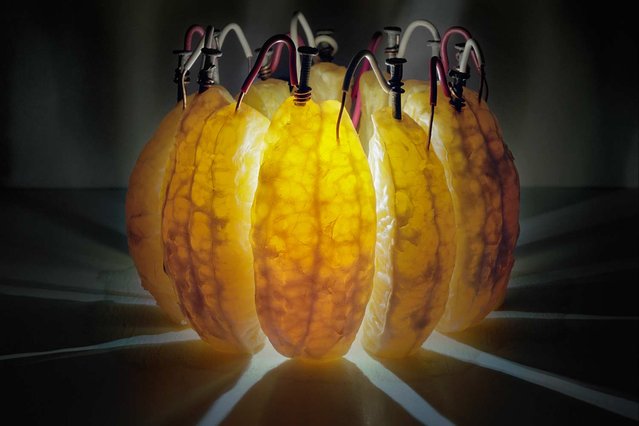 Wedges of an orange generate enough current and electrical juice – 3.5 volts – to power an LED. The fruit’s citric acid helps electrons flow from galvanized nails to copper wire in this 14-hour exposure. This image was published in September’s Visions of Earth, a trio of photos that appear in each issue of National Geographic. (Photo by Caleb Charland/National Geographic) 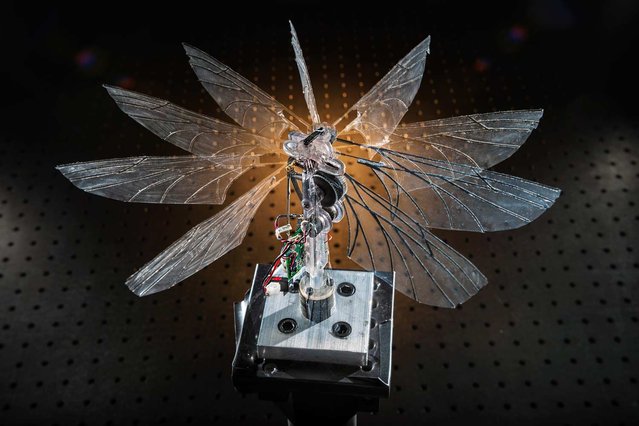 Drones are controversial. After proving their prowess against al Qaeda, they’re poised for takeoff in American airspace: patrolling borders, dusting crops, and tracking perpetrators. But how safe are they? And what will they mean for our privacy and civil rights? A March story in National Geographic considered the issue, with a photo gallery – including this shot of robo-wings being tested in an Air Force lab – that illustrated new advances in drone technology. (Photo by Joe McNally/National Geographic) 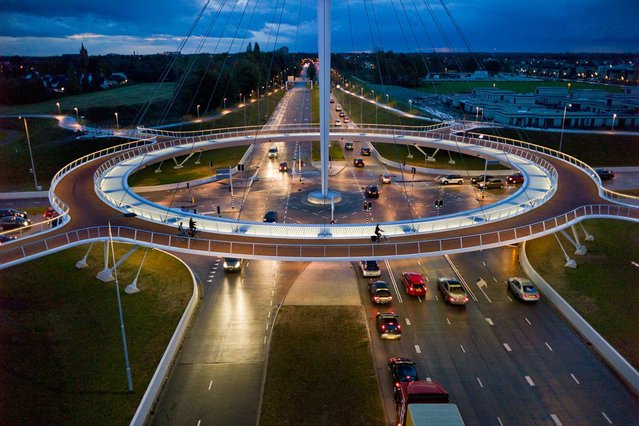 To address traffic congestion, a city in the Netherlands called Einhoven is using circular logic. An elevated 360-degree circuit, suspended by cables and stabilized by counterweights, is helping 5,000 bicyclists a day bypass roads used by 25,000 cars. The result? A bottleneck reduction for all. (Photo by Chris Keulen/National Geographic) 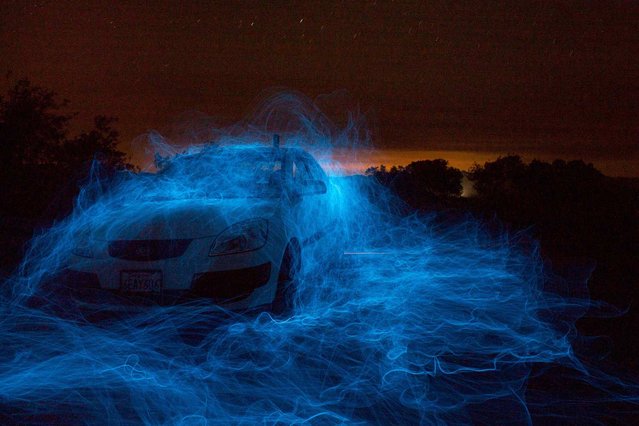 Back in September, we challenged the online Your Shot community with a question: What does the night mean to you? By way of an answer, we received 8,520 reader-submitted photos. Our editors selected 35 to publish, including this one – Randy Miller’s minute-long exposure of a car illuminated by blue electroluminescent wire, with the lights of the Milky Way glinting overhead. (Photo by Randy Miller/National Geographic) 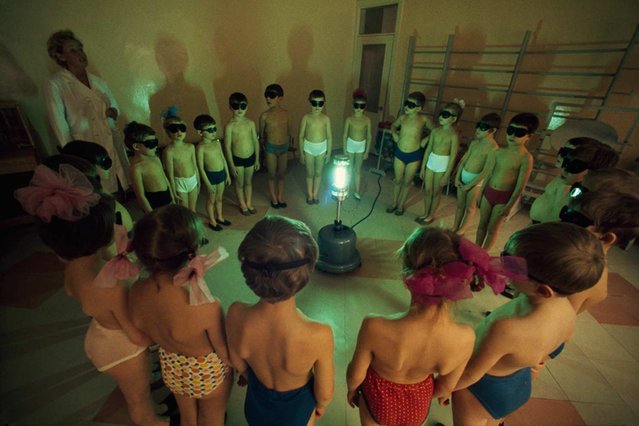 In honor of our 125th anniversary, we’re sharing National Geographic photographs – many never before published – that reveal cultures and moments of the past. In this one, taken in 1977 by Dean Conger, children in Murmansk, U.S.S.R., circle around an ultraviolet lamp to get a dose of vitamin D. (Photo by Dean Conger/National Geographic) 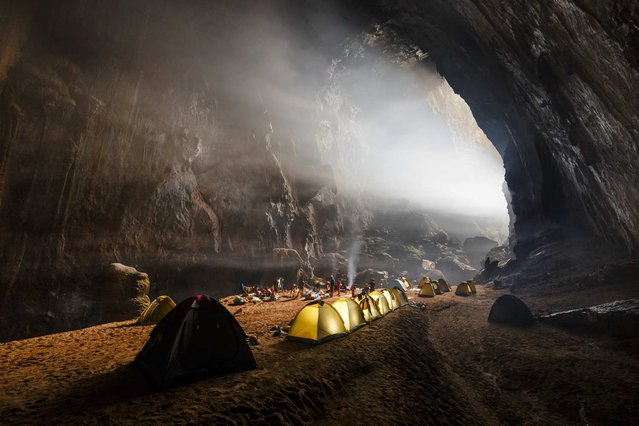 On September 17, National Geographic editors chose their Daily Dozen from among the thousands of photographs submitted to the online Your Shot community the day before. Included in those 12 images was this picture of tents set up for a night of camping inside Hang Son Doong – an underground passage – in Vietnam. (Photo by Ryan Deboodt/National Geographic) 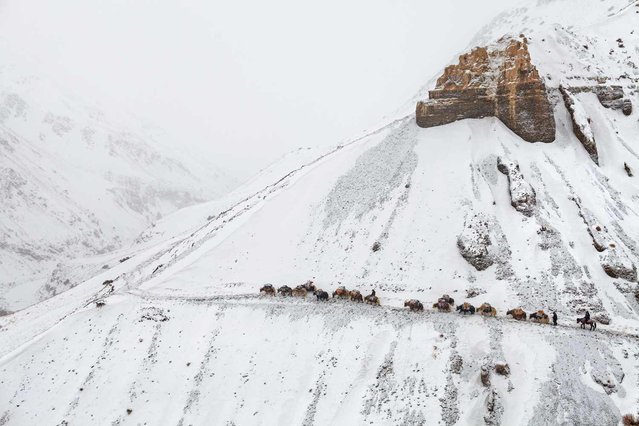 Traders and their yaks cling to a treacherous mountain path in Afghanistan’s Little Pamir. These Kyrgyz nomads eke out a living in a high-altitude area they refer to as the “roof of the world”. That may sound romantic, but “it’s also an environment at the very cusp of human survivability”, writes Michael Finkel in the February issue of National Geographic. “Much of it is above 14,000 feet. The wind is furious; crops are impossible to grow. The temperature can drop below freezing 340 days a year. Many Kyrgyz have never seen a tree”. (Photo by Matthieu Paley/National Geographic) 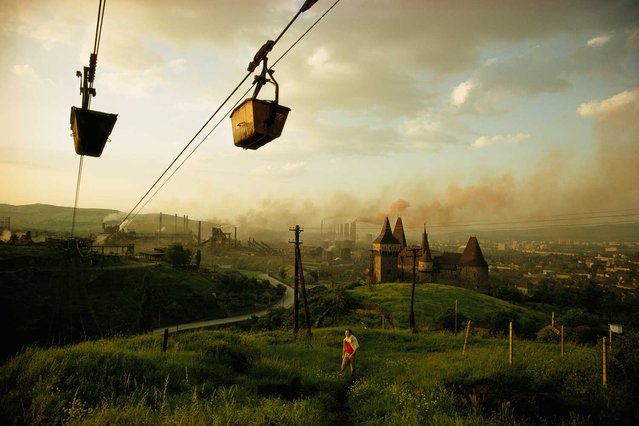 Carts traverse the sky above the steelworks city of Hunedoara, Romania, in this image first published in the November 1975 issue of National Geographic. It was revived in the November 2013 issue as a Flashback, a section that showcases photographs from the magazine’s archives. Visitors to the castle (at center right) include Vlad III, known as Vlad the Impaler – Bram Stoker’s inspiration for Count Dracula. (Photo by Winfield Parks/National Geographic)

In May, we asked Your Shot photographers to show us who they were. Over 3,300 community members submitted nearly 8,000 photos. Our editors selected 20 to publish, including this selfie of Jane Sheng seemingly suspended in an infinite hall of mirrors in Auckland, New Zealand. “Nowadays the ubiquitous selfie can easily be overlooked as silly”, writes Monica Clare Corcoran, Your Shot managing editor. “However, if done well, a self-portrait can provide insight into that photographer’s unique vision and an appreciation of their life experiences and personal story”. (Photo by Jane Sheng/National Geographic) 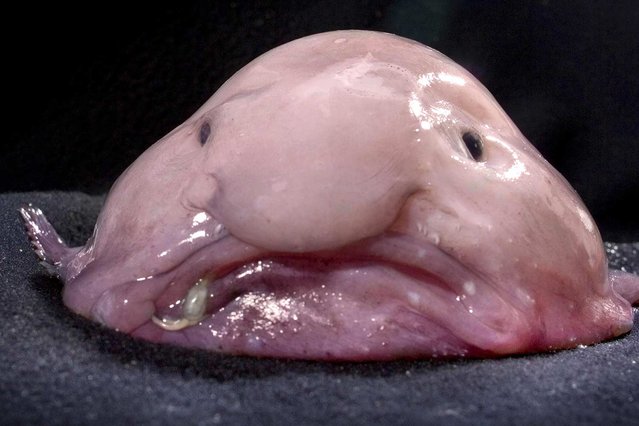 Sporting a face only a mother could love, the deep-sea blobfish won the dubious honor of “world’s ugliest animal” in September. The contest, organized by the England-based Ugly Animal Preservation Society, invited comedians to submit short videos championing their pick for ugliest creature. The public then voted on which animal they wanted to be the face of the Society. “Simon Watt, biologist and President for Life of the Society organized the contest to raise awareness of endangered animals whose untraditional looks don’t garner as much attention as cuddly pandas and majestic tigers”, wrote Jennifer Holland. (Photo by Kerryn Parkinson/Caters News/Zuma Press/National Geographic) 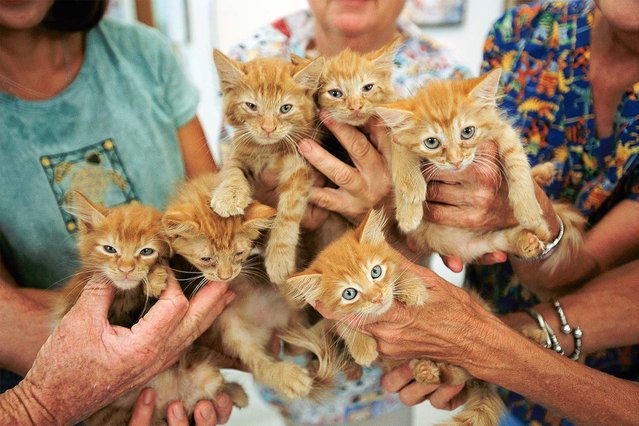 In one of the more contentious news stories this year, National Geographic writer and editor Christine Dell’Amore discusses an opinion piece in the Orlando Sentinel suggesting euthanasia as a means to deal with feral cats. “Over 80 million pet cats reside in U.S. homes and as many as 80 million more free-roaming cats survive outside”, writes Dell’Amore. Readers wrote in with over 700 comments expressing frustration over current control methods and horror over the Sentinel’s opinion piece while suggesting alternative ways of dealing with feral felines. (Photo by Melissa Farlow/National Geographic) 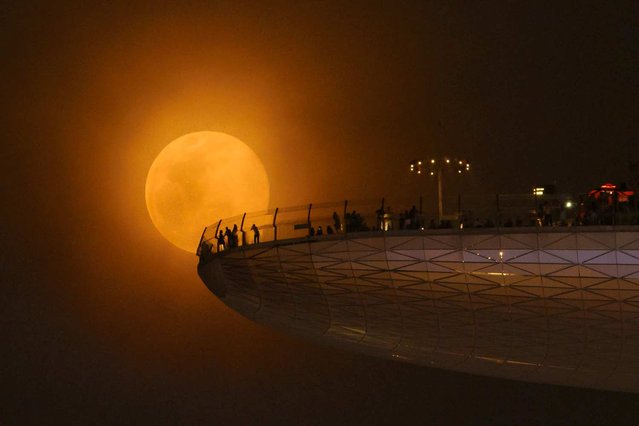 On June 23, the full moon loomed over skywatchers as a “supermoon”. This occurs when the moon is the closest it will be to the Earth in the calendar year. The lunar orb appeared 8 percent larger and 17 percent brighter than usual, drawing the eyes, and camera lenses, of readers around the world. Cheng Kiang Ng submitted this supermoon photograph, taken in Marina Bay Sands Skypark in Singapore, to the online Your Shot community on June 24. (Photo by Cheng Kiang Ng/National Geographic) 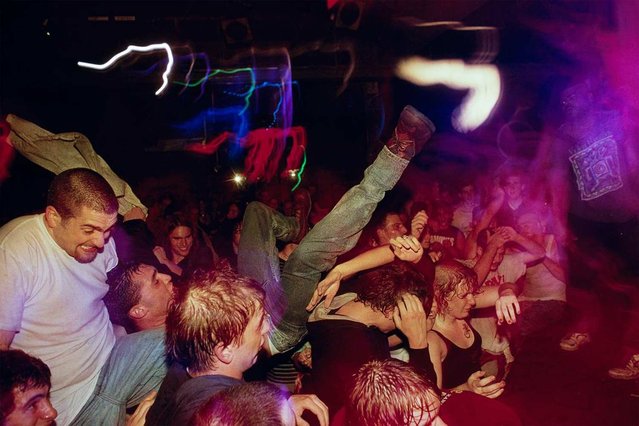 Originally published in February, this story analyzing dancers in mosh pits proves that researchers really will study anything. “To most scientists, heavy metal refers to elements on the lower end of the periodic table”, writes Nicholas Mott. “But to Jesse Silverberg and Matt Bierbaum, doctoral students at Cornell University’s department of condensed matter physics, aggressive heavy metal music – and the violent dancing that accompanies it – could be a key to understanding extreme situations such as riots and panicked responses to disasters”. (Photo by Lynn Johnson/National Geographic) 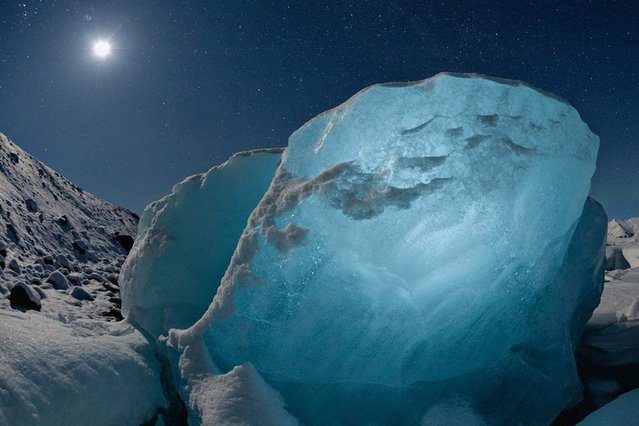 This glowing boulder of ice made National Geographic’s Photo of the Day on October 27. The 800-pound “ice diamond” – washed up on a beach in Iceland – combines the beauty, as well as the tragedy, of disappearing glaciers for photographer James Balog. (Photo by James Balog/National Geographic) 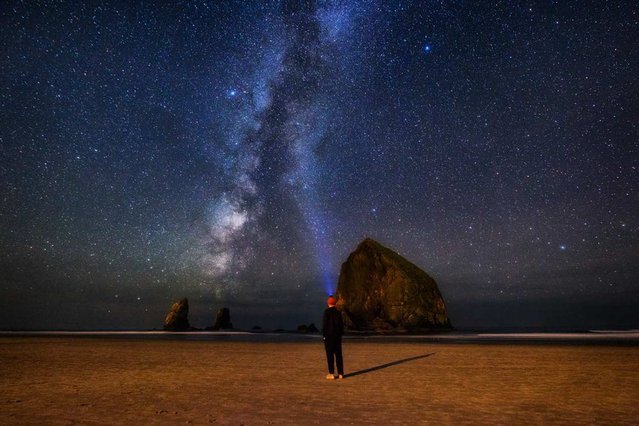 Michael Matti submitted this portrait of himself staring at the Milky Way over Cannon Beach, Oregon, to the online Your Shot community on November 13. When Matti went down to the beach after sunset on October 4, the clear sky and a new moon allowed him to capture this ethereal view of the galaxy. (Photo by Michael Matti/National Geographic) 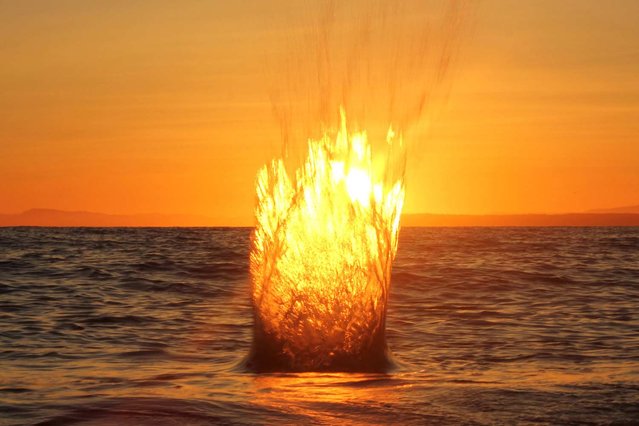 Light from a setting sun catches water ejected into the air by a rock thrown into the ocean at White Rock, British Columbia. Rob Leslie submitted this photo to the online Your Shot community. Taken with a tripod-mounted camera, editors selected Leslie’s photo as their Photo of the Day on February 8. (Photo by Rob Leslie/National Geographic)
Edit Del
06 Jan 2014 12:09:00, post received 0 comments
Publication archive:
←   →
Popular tags:
All tags
Last searches: