Touching Contestants Take Part in the World Cornish Pasty Championships
“A Cornish pasty, sometimes known as a pastie or British pasty in the United States, is a filled pastry case, associated in particular with Cornwall in Great Britain. It is made by placing the uncooked filling on a flat pastry circle, and folding it to wrap the filling, crimping the edge at the side or top to form a seal. The result is a raised semicircular package.

The traditional Cornish pasty, which has Protected Geographical Indication (PGI) status in Europe, is filled with beef, sliced or diced potato, swede (also known as a yellow turnip or rutabaga) and onion, seasoned with salt and pepper, and is baked. Today, the pasty is the food most associated with Cornwall regarded as its national dish, and accounts for 6% of the Cornish food economy. Pasties with many different fillings are made; some shops specialise in selling all sorts of pasties.

The origins of the pasty are unclear, though there are many references to them throughout historical documents and fiction. The pasty is now popular world-wide due to the spread of Cornish miners, and variations can be found in Australia, the United States, Mexico and elsewhere”. – Wikipedia 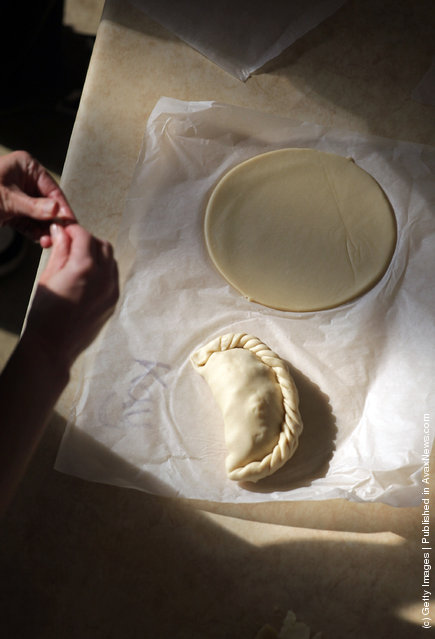 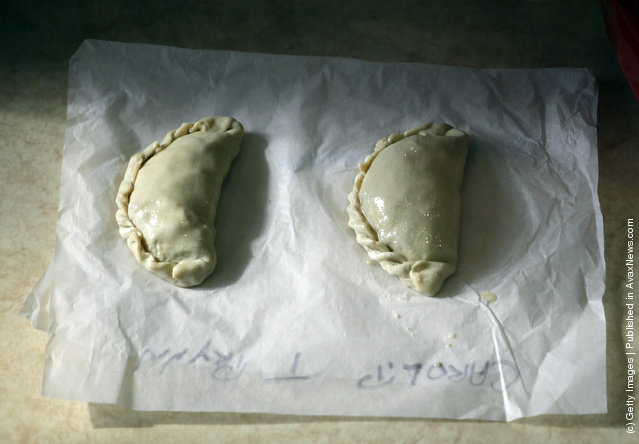 A Cornish pasty in made in a pasty making workshop as part of the World Cornish Pasty Championships at The Eden Project on March 3, 2012 in St Austell, England. (Photo by Matt Cardy/Getty Images) 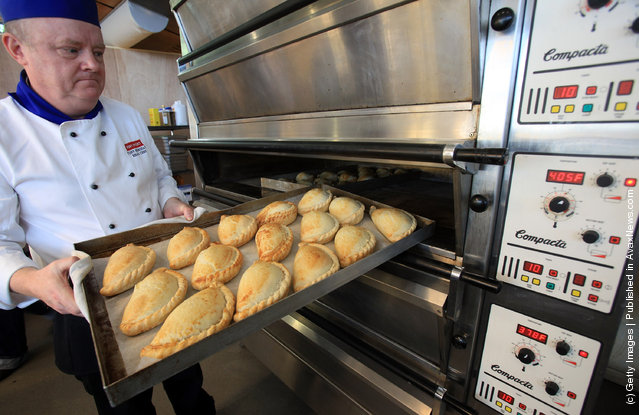 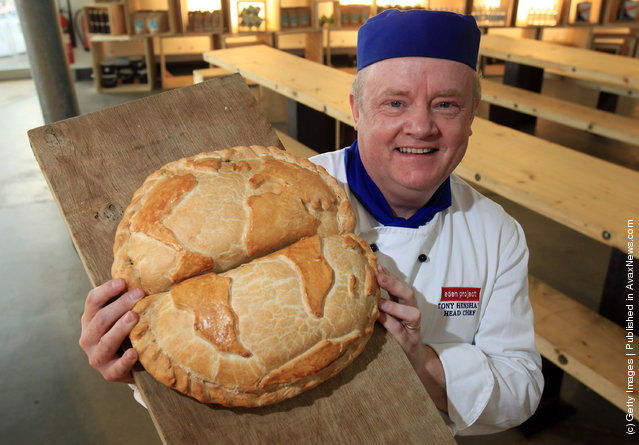 Head chef Tony Henshaw poses for a photograph with a giant pasty shaped as the globe at the World Cornish Pasty Championships at The Eden Project on March 3, 2012 in St Austell, England. (Photo by Matt Cardy/Getty Images) 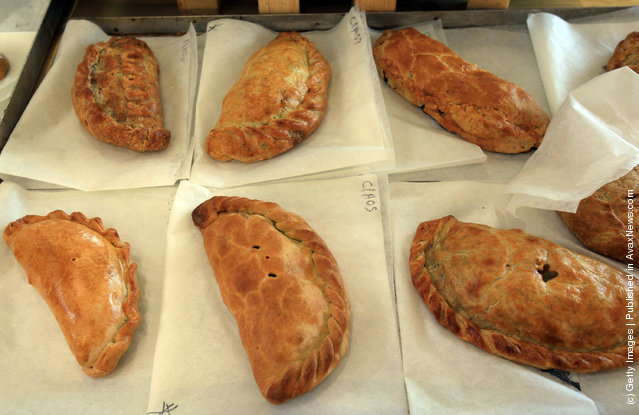 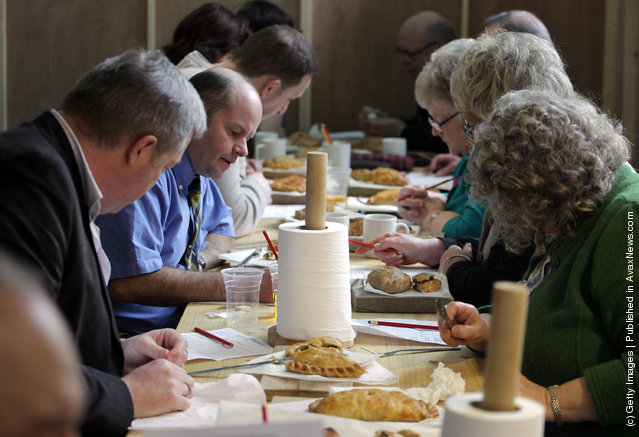 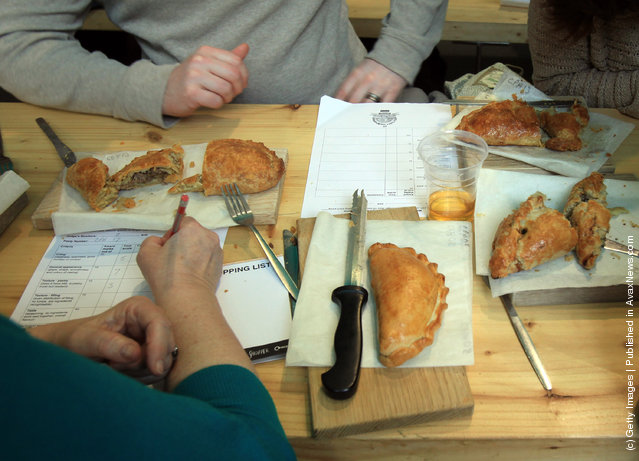 Cornish pasties that have been baked as part of the World Cornish Pasty Championships at The Eden Project are judged on March 3, 2012 in St Austell, England. Cooks from around the world have flown into Cornwall to celebrate the popular local delicacy, that was given protected status under EU law in 2011 and is said to date back as far the 1300s, at the first World Pasty Championships. Although judges will be looking for the best pasty made to the traditional recipe, some variations being judged today include pasties made with squirrel meat. (Photo by Matt Cardy/Getty Images) 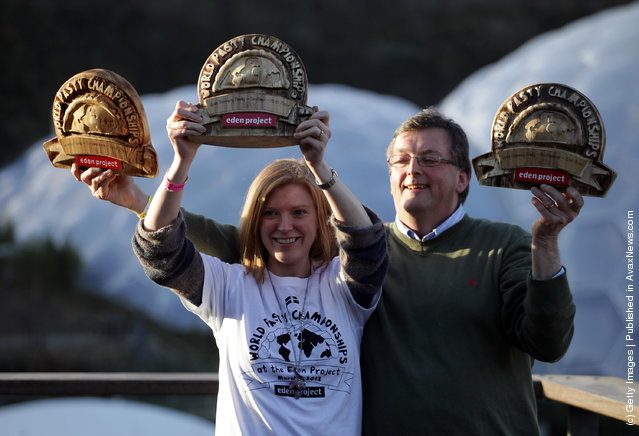 Winners of the World Cornish Pasty Championships, Suzanne Manson, who won the amateur category and Graham Cornish, from Ginsters who won the professional category, pose for a photograph at The Eden Project on March 3, 2012 in St Austell, England. (Photo by Matt Cardy/Getty Images) 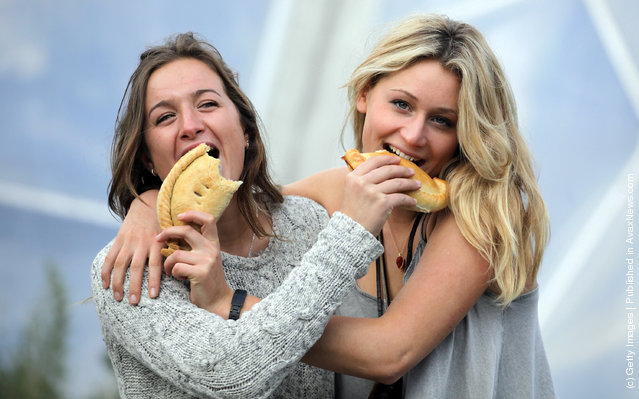